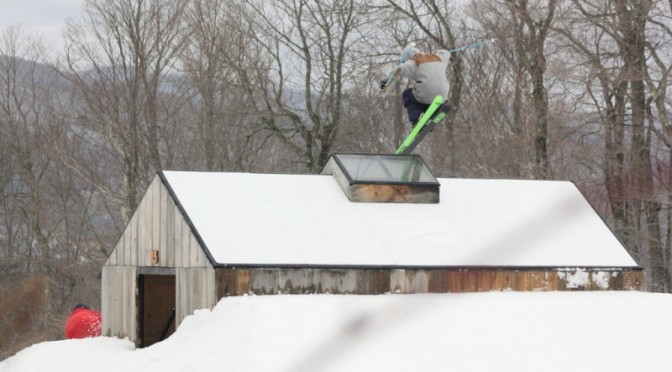 West Dover, VT – While most ski resorts’ terrain parks are urban-themed with metal rails, wall rides and the like, The Farm at Mount Snow’s Carinthia has gone rural with features that you see on a daily basis when driving through the Green Mountain State like a maple sugar shack, a barn, a re-purposed horse trailer and even some split rail fence.

The Farm made its debut on at Mount Snow earlier this month.

“Vermont is not a very urban place, so my team and I wanted to build a park that represented the cool things you see around here and also make it something new and unique for the kids to enjoy,” said Mount Snow freestyle terrain manager, Day Franzen.  “The Farm is very different from anything I’ve done before.  We’re excited about it.”

Carinthia is the only all-park mountain face in the East with eight different terrain parks of all sizes covering almost 100 acres.  The custom-built features in The Farm add to the massive collection of over 130 different elements Franzen and his park crew have to plant at Carinthia.  The Farm was made possible with support from Red Bull and Burton Snowboards.

Now that The Farm is complete, work will begin on building Inferno which is Carinthia’s extra-large feature terrain park.  Inferno is home to the Carinthia Freeski Open on March 14 and 15 and is in fact the only terrain park on earth to host both the Winter X Games and Winter Dew Tour slopestyle events.