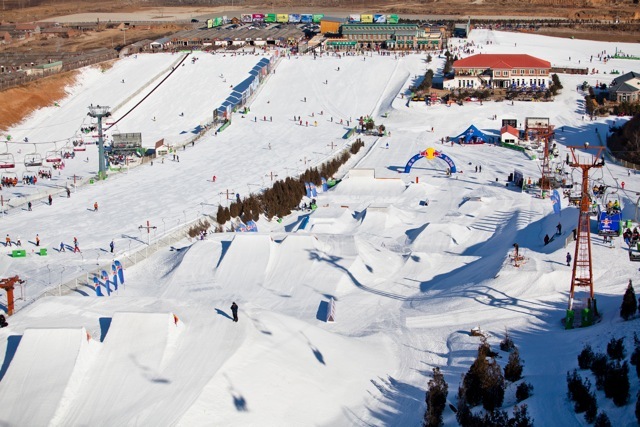 Beijing, China – After a decade of driving the Chinese snowboard scene, the Nanshan Open celebrates its 10th birthday in style Jan. 14-15 by gaining 5Star TTR status to become the largest slopestyle snowboard competition in Asia.

The Nanshan Open blends contest riding, cultural immersion and local hospitality for its athletes. The local Mellowparks.cn park and event crew step it up each year to build one of Asia’s top slopestyle terrain parks, mixing huge, perfectly shaped jumps with creative and challenging jib features in the Nike Nanshan Park in Beijing. Organizers Steve Zdarsky and Marco Huang can be seen testing the kicker and obstacle setup themselves on training day, while the rest of their crew always find time to ride and hang with the competitors post-event.

The Nanshan Open began in 2002 when a small group of friends threw the first snowboard competition ever held on Chinese soil. As the contest gained momentum and popularity the following years, in 2007 it earned global recognition as a 3Star stop on the TTR World Tour. The Nanshan Open leveled up to 4Star status the subsequent year and in 2010 was the largest Asian event on the TTR Snowboard World Tour.

“The Nanshan Open in China was amazing,” said rider Nick Brown. “From the moment we arrived in Beijing we were taken care of so well. Amazing dinners every night, nice hotels and we got to do lots of touristy stuff. The comp was fun, too, definitely one of my better snowboarding experiences.”

Now a 5Star event, the two-day competition offers up US$50,000 in prize money and is preceded by a 2Star local qualifier on January 7th that will earn six Chinese riders a chance to compete in the Open alongside their international idols.

In past years the event has hosted a who’s-who of up and coming riders, including Transworld’s “Rookie of the Year” Austin Smith, young stars Nils Arvidsson and Anton Bilare along with the Isenseven, Nitro RoadWarriors and Pirate Movie Productions film crews. Past winners of the event include Juuso Laivisto (2010), Freddy Austbo (2009), Jakob Wilhelmson (2008) and Hampus Mosesson (2007), while  Travis Parker came on as guest judge for 2011. Last year saw local young-gun He Wei make a name for himself, placing 8th in the highest finish to date for a Chinese rider in a TTR competition.