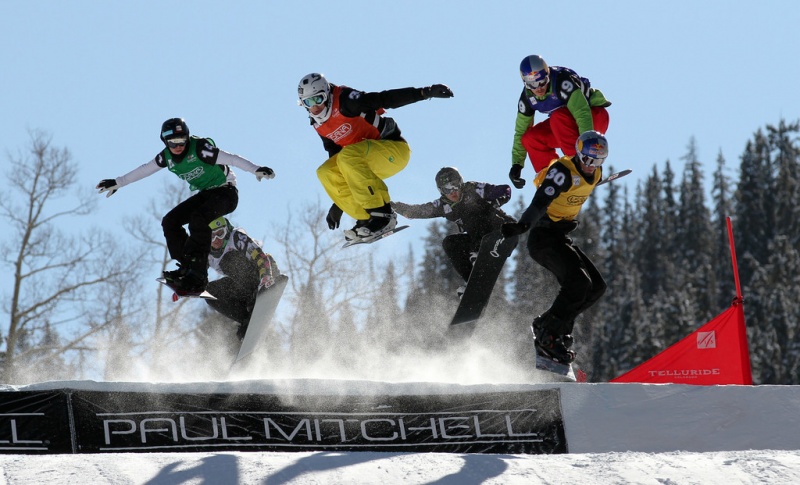 Friday’s win marked the 24th in 55 starts for Jacobellis. “I haven’t had great success at the first World Cup of any season for the last few years so this has really kicked it off for me,” she said. “It shows that what I was doing in the summer was working as well as our early training camp here at Telluride. And that’s crucial to that head start for the season.”

“I was able to get the hole shot in the first two very easily, getting out of the gate and pumping the features. In the final, I don’t feel like I was the first one out of the gate but I was working the features really well,” Jacobellis explained. “I just tried to get into the smallest tuck possible as I knew Dominque was right behind me and she carries the freight really well in the flat sections. I just tried to make not make any mistakes, hold the line and be patient with all my turns.”

“It was a very close race. I tried to pass her in the middle but the line I chose turned out to be way to slow,” admitted Maltais. “It was a good battle, a good race. I’m happy.”

On the men’s said, Vaultier remains undefeated in Telluride, scoring a three-peat with Friday’s win.

“I don’t know why I haven’t been beaten on this course. It’s nothing special to me. It’s a race like all others. And I want to win the races,” he said. “It’s amazing, it’s unreal to win three times in a row. But this years win is special. It was the first race of the season and I didn’t recognize myself. In addition, it was the first race on a new board, with new bindings. Such a win removes all doubts whether it was the right decision for this change or not. It was worth it!”

Canada’s Christopher Robanske, coming off injury last season, was pleased with his second place finish. “I had ten months off, did some recovery as I broke my back at the X Games last season. So, this is an amazing way to come back strong,” Robanske confirmed. “I’m super happy. I rode as hard as I could and with no regrets. And here we are. It was a close battle with Pierre (Vaultier). He is a big idol of mine. I watch a lot of his riding. So I’m super stoked to be right behind him.”

Try as he might, Baumgartner was unable to pull ahead of Vaultier and Robanske.

“This course brought so many pinch zones and so many places where everyone would bottleneck together so just the battling was unbelievable – you couldn’t ask for more than that,” said Baumgartner. “The final was crazy. I went into the chicane turns and made a little mistake and had to go dead straight into one of them and lost all my speed. The only chance I had was to pin it as fast as I could into turn five. I got inside there and I thought I had second but he went to the inside on the second to last jump, I had to go outside a little bit. I made a great move – the best move I made on it all day – but he made a good move too. But he just barely edged me out.”

The U.S. squad spent the week leading up to this weekend’s competition training in Telluride.

“It was so nice that Telluride accommodated us for the training camp. Just to come out here to get used to the altitude with two different mini-courses to try some drills and work with other teammates to get the fine tuning about what is the fastest is extremely beneficial for us,” Jacobellis confirmed.

“I love this place!” added Baumgartner “I actually held a season pass here in ’03-04 – this is where it all started for me. The way they treat us is unbelievable.”

The USANA Snowboardcross Cup wraps up Saturday in Telluride with a team SBX event.