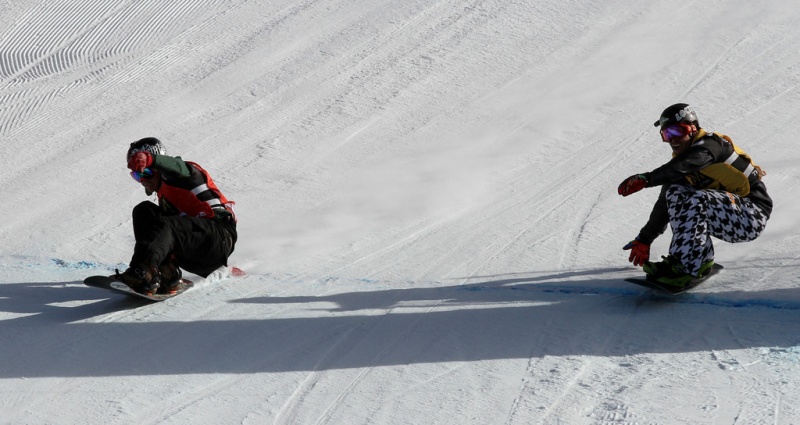 “That was a big lead I almost caught up. I just pointed and went for it. I pinned it towards, I almost had him,” said Baumgartner. “I feel super pleased. It’s good to be 30.”

In the team snowboardcross, as soon as the first rider in each two-rider team crosses the finishes line, the start gate automatically opens for his or her team mate. Baumgartner crossed the finish line mere inches behind France’s Xavier De le Rue, who nearly gave up the substantial lead built up by Pierre Vaultier, Friday’s individual winner, leaving the U.S. team in second place behind the Frenchmen.  Norway’s team consisting of Joachim Havikhagen and Stian Sivertzen  rounded out the podium in third.

“I don’t know why I sucked in the top part. That was my problem yesterday, too,” admitted De le Rue. “The rest was OK. But today was much easier because Pierre (Vaultier) did an awesome job.”

On the women’s side, the French team of Nelly Moenne Loccoz and Deborah Anthonioz came out first in an enthralling final in which Anthonioz staged a comeback from third to first to relegate Canadians Dominique Maltais and Maelle Ricker to second place. Jacobellis and Chythlook-Sifsof crossed the finish line in third.

“I’m super happy. It was a great race,” said Anthonioz. “I was feeling very well today and knew the course. I knew where the fast lines would be. That helped a lot.”

A formal ceremony showcasing the U.S. Snowboarding SBX Team was held in a nearby plaza immediately following the event.