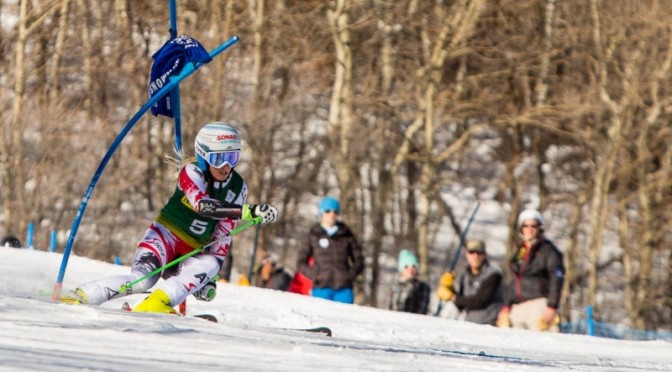 Aspen, CO – Eva-Maria Brem of Austria bested the world’s top female skiers on Saturday, completing the technical course down Aspen Mountain with a combined time of 2:05.97 to win the giant slalom in the 2014 Audi FIS Ski World Cup at the Nature Valley Aspen Winternational.

Brem finished almost sixth-tenths of a second faster than the second place finisher in the first World Cup win of her career.

“I’m very thankful for this moment. Totally proud and happy,” said Brem on her top finish. “I wasn’t nervous at the start. I just tried to fully attack and in the end it was good enough.”

Mikaela Shiffrin was the top American finisher, coming in sixth place. When asked how it felt to race in Aspen in front of all her fans she said, “It was really cool, I could hear them at the start and that got me psyched on both runs.”

A first-run mistake nearly earned Shiffrin an early exit, but she powered through to stay in contention. Despite being 2.23 seconds out, Shiffrin skied fifth fastest in the second run, winning the bottom.

“It seemed like an insurmountable gap,” Shiffrin acknowledged. “But as I keep  improving my skiing and building my confidence, I might be able to make up a gap like that someway. I felt like I did a great job attacking in the second run and it was a step in the right direction.”

“Besides for the mistake on the flats first run, Mikaela had a very solid day today and skied pretty well. Another good GS performance from her!” said U.S. Ski Team Alpine Director, Patrick Riml. “Julia was charging, and unfortunately was not able to finish – but shows good technical skiing.”