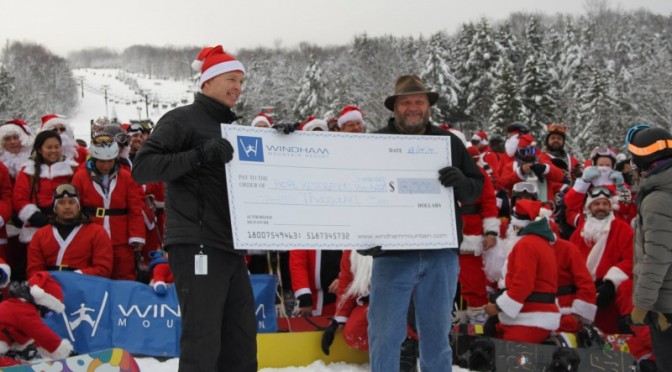 Windham, NY – New York skiers and riders truly got into the holiday spirit this past week after receiving an early gift: a snowstorm that dumped up to 20 inches of powder on several regions canada goose Calgary Jakke mænd throughout the state. The natural bounty allowed lift-served areas to open up an unusually large percentage of their terrain for the second week of December and transformed slopes into a winter wonderland.

But the yuletide spirit and sense of generosity didn’t end there, as Windham Mountain Resort in the northern Catskill Mountains hosted its fourth annual Skiing/Riding Santa event in which anyone with a helmet-to-boot-top Kris Kringle outfit and a pair of skis or snowboard could join in to help raise money for a local charity.

The fun began just after first bell as 300 Santas gathered in front of cameras for a groupcanada goose Manitoba Jakke mænd shot in which resort president and general canada goose Canada Goose dame manager Chip Seamans presented a check to the Windham Community Food Pantry for $8,000: $6,000 raised by participants along with $2,000 kicked in by the ski area. The total donation was four times the amount raised last year. Seamans explained, “The success of this year’s Skiing/Riding Santa is truly heartfelt. Windham Mountain Resort has a strong sense community and this event has afforded us the opportunity to give back.”

Following the ceremony, hundreds of Santas boarded the Whiteway Triple lift en masse for a visually impressive group run. Red-bedecked skiers and riders could be seen the rest of the day carving lines and bumping moguls in the softcanada goose Montebello Parka snow and posing for more photos in and around the base lodge.