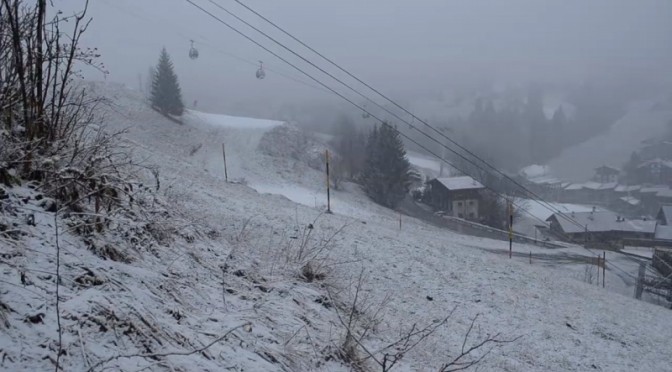 La Clusaz, France – When only 40 of France’s roughly 200 ski resorts are open a week before Christmas, it’s time to worry.

The lack of snowfall thus far this winter across a broad swath of France, Switzerland and Austria has already forced the relocation of World Cup ski races from both Courchevel and Val d’Isere, home to Europe’s largest snowmaking system, earlier this month. The cross-country World Cup was moved from La Clusaz to Davos. But as snow remains conspicuously absent, there’s now growing concern amongst resorts, tour operators and holiday vacationers alike as the vital Christmas/New Year’s vacation period draws near.

Some snow-sure resorts like Zermatt and Davos in Switzerland, and Les Arcs, Val Thorens and Les Deux Alpes in France, can thank their higher elevation ski terrain for an adequate base. Resorts in the Pyrenees, spanning the border between France and Spain, have received more snow then their Alpine brethren. But in the Alps below an elevation of 2,000 meters, where warm temperatures have left snowmaking machines idle, snow cover remains sparse. The weather agency Météo France indicates that 2014 will fall amongst the three warmest years in that country since 1900.

In Austria’s famed Tyrol region, less than 40% of ski resorts are operating. But in the southern Alps, Italian ski resorts have been faring much better with snow, but an ongoing economic recession threatens to throttle revenues this season. Ironically, there’s more snow right now on the slopes of the Scottish Highlands than there is in the Alps.