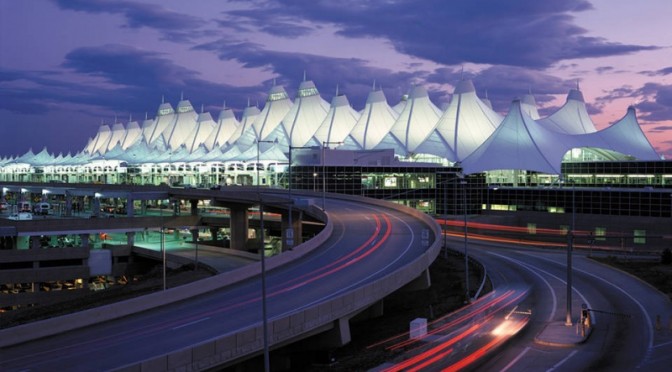 Options include direct international flights from eight different countries. In many cases, instead of flying to Denver and driving to the resort, additional flight options allow guests to fly direct from the originating city in locations across the U.S. to one of eight regional airports located in Colorado mountain and resort communities.

Denver International Airport (DEN) is the largest airport in the United States and one of the busiest airports in the world, benefiting from numerous direct flights from all major cities coast-to-coast in the U.S. It’s one of the few U.S. airports that hosts non-stop flights from both Europe and Asia, and receives visitors directly from eight different countries – Australia, Canada, Germany, Iceland, Japan, Mexico, Panama, and the United Kingdom.

Peak winter traffic into Aspen/Pitkin County Airport (ASE) includes more than 200 direct and connecting weekly flights, including expanded service on several major carriers for the 2015-16 ski season. From the airport, it’s only six miles to Snowmass Village and three miles to Aspen.

ASE will host a significant expansion of service by American Airlines with new daily non-stop flights from Chicago/O’Hare (ORD) along with a third daily non-stop from Dallas/Fort Worth (DFW) for the holidays. New non-stop flights from Chicago will facilitate connections from markets throughout the Midwest and Northeast, including all four New York City-area airports.  Also, a re-timed morning inbound trip from DFW will now allow ideal connections from South America throughout the winter.

American’s winter seasonal service into Aspen from DFW, LAX, and ORD begins December 17, 2015 and will now feature a total of five flights daily through January 4, and four daily flights for the balance of the winter through April 4, 2016. All flights into Aspen Snowmass will be operated by Envoy Air as American Eagle with CRJ-700 aircraft, featuring a total of 65 seats including nine seats in First Class.

In addition, United has continued to expand the frequency of their nonstop flights into Aspen/Pitkin County Airport with an additional daily nonstop from Chicago/O’Hare for a total of up to five daily flights to ASE. United has also increased the frequency of its nonstop flights from Houston (from three to four flights daily), LAX (from four to five flights daily) and San Francisco (SFO) (from one to three flights daily) while continuing to offer an average of eight to 10 daily connecting flights from Denver. Altogether, United will be operating as many as 26 flights daily in and out of the Aspen/Pitkin County Airport this winter with flights strategically timed to offer convenient connections from virtually all markets across both their domestic and global networks.

Delta Air Lines offers daily nonstop service to Aspen/Pitkin County Airport from Atlanta’s Hartsfield-Jackson International Airport (ATL), one of the largest international air hubs in the world. The timing of Delta’s flights from Atlanta are ideal for connections both to and from South America as well as the Middle East. Delta has also increased the frequency of its service from Minneapolis-St. Paul International Airport from Saturday-only service to five flights per week over the holidays, and two flights per week (Wednesdays and Saturdays) for most of February and March.

Gunnison/Crested Butte Regional Airport (GUC) hosts direct flights from Denver, Dallas, Houston, and Chicago/O’Hare. Through American and United Airlines’ extensive flight networks, guests can get to Crested Butte from anywhere in the world. New for the 2015-16 ski season, Alaska Airlines will operate twice-weekly direct service to Gunnison/Crested Butte from Los Angeles International Airport (LAX) beginning December 16, 2015 and flying through March 26, 2016. Upon landing, shuttles are available to transport guests to resorts in the area such as Crested Butte or Monarch Mountain. Guests can also utilize rental car services from Hertz, Avis, or Budget available in Gunnison.

Steamboat’s winter flight program will feature expanded nonstop air service from six of its 11 origin cities with flights into Steamboat/Hayden Airport (HDN) for the 2015-16 winter season. The upcoming service represents a 13 percent increase in seats flying from nonstop markets to Steamboat; the second winter season in a row of seat growth into Hayden airport.

Chicago (ORD), Los Angeles (LAX), Minneapolis/ St. Paul (MSP), Newark (EWR), Seattle (SEA) and Washington – Dulles (IAD) will offer additional days of service during the winter season. United Airlines will fly into Steamboat/Hayden Airport with the most frequency this upcoming winter with four expanded flights. Nonstop service from LAX to Steamboat will fly daily while Newark and Washington-Dulles will both add Sunday flights, and Chicago upgrades to daily service for parts of the season. Alaska Airlines expands Seattle flights to four days a week with a new Tuesday departure and Delta rounds out the increased capacity with a Saturday flight offered from February 13 through March 26, 2016.

Winter 2015-16 will see a major increase in service to Telluride on American Airlines. American will now offer a daily 128-seat mainline jet and two on Saturdays through the winter season from Dallas/Fort Worth (DFW) to MTJ. Flights from Phoenix (PHX) will more than double this winter, and American is also adding new routes from Chicago (ORD) and Los Angeles (LAX).

In addition, Delta will add Wednesdays to the existing Saturday/Sunday flights from Atlanta in the second half of the season.

On the western slope of Colorado, passengers arriving into Grand Junction Regional Airport (GJT) will find themselves at Powderhorn’s lifts in under an hour. GJT hosts nonstop daily service from Denver, Salt Lake City, Phoenix, Las Vegas, Dallas/Fort Worth, and Houston.

Eagle County Airport (EGE), the closest runway to Vail and Beaver Creek, will host increased daily service from Dallas and Miami on American Airlines this winter, which is also adding a third daily flight from DFW. United is adding new weekly Saturday/Sunday non-stop service from Chicago into EGE, from December 19 through January 3, and again from February 13 through April 3.

Sunlight Resort, nestled in nearby Glenwood Springs, is accessible via EGE as well as Aspen/Pitkin airport and Grand Junction Airport. The Sunlight Shuttle runs to and from Glenwood Springs, as does the Roaring Fork Transit Authority. Perched on Tennessee Pass just outside of historic Leadville, Ski Cooper just over an hour’s drive from EGE.