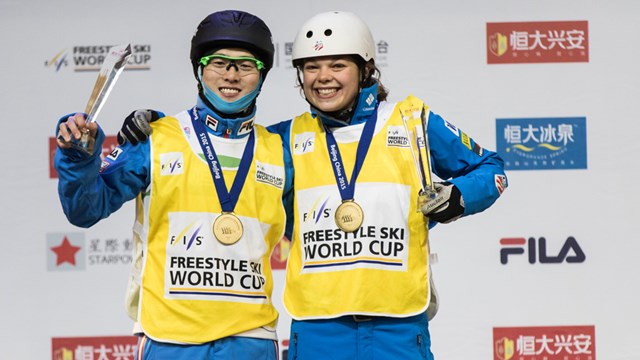 Caldwell’s road to Beijing this season was not without its challenges. She missed some summer training due to a herniated disk in her neck and resumed jumping on snow in November, but injured her knee just a few weeks ago. Coming in to Saturday’s competition, it was unclear if Caldwell would compete at her highest degree of difficulty.

“I competed with a full, full in qualifications and almost blew it,” said Caldwell. “I barely squeaked into finals, it was nerve-racking! I did one [a full, full, full] in training and almost didn’t get it. The one in finals was ok, I put it to my feet, but I have a lot of stuff to work on. After hurting my knee prior to coming to Beijing, I was only planning to compete with doubles, but I was doing well and I felt good, so the coaches thought it would be ok for me to go up and I did and it paid off.”

Issues with speed prevented the U.S. men from advancing anyone in to the finals. Eric Loughran (Pelham, N.H.), who stuck his lay double full, full but was a little off on the landing, was the top U.S. finisher in 13th. China’s Guangpu Qi took home the Beijing win for the second year, with Russia’s Petr Meduluch and Australia’s David Morris rounding out the podium in second and third, respectively.

“I felt really good today and I really wanted to win in Beijing again,” said Qi. “It’s great to compete in China and it’s really motivating to grab the win at home.”

“Getting enough speed was hard for our guys today,” said U.S. Ski Team head aerials coach Todd Ossian. “We’ll look to make adjustments on the site and with our waxing for (Sunday). But we aren’t going to dwell on the results from today. All the athletes are looking forward to the competition tomorrow, especially the team event. We have a lot of fun with that.”

Competition in Beijing continues today with the aerials team event. Athletes will complete an individual qualification jump, which counts as a World Cup result, before forming teams for finals.