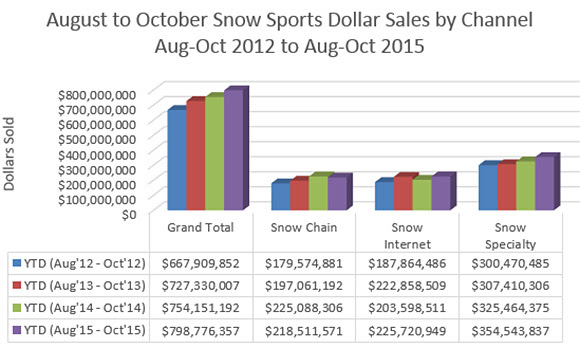 McLean, VA – Ski and snowboard retail trade association SnowSports Industries America (SIA) and The NPD Group – Sports and Leisure Trends have released retail sales numbers for August through October 2015, projecting total market results from data collected from the point of sale systems of more than 1,200 snow sports retailers. The results show a healthy industry, but fail to yet account for the abnormally warm weather afflicting the populous East Coast since November.

According to NPD, the snow sports market is up 8% in units sold and 6% in dollars sold to $799 million through October 31st, even as average prices were down 2% overall.  Outerwear sales including fleece, shell, insulated shell and softshell tops and bottoms finished October up 9% in units sold and up 4% in dollars sold to $346 million and accounted for more than 40% of all dollars spent in the snow sports market through Halloween night.  Handwear, headwear, socks and base layer categories enjoyed increased sales.  Socks, in particular, were flying off the shelves, up 46% in units and 52% in dollars sold.

Looking region by region, specialty shop sales results weren’t even nationwide. The South and Midwest regions suffered from declining sales while specialty shops in the west brought in $27 million more compared to August to October sales in 2014. Northeast sales were up through October but warmer temperatures and lack of snow likely stalled November and December sales in this region.