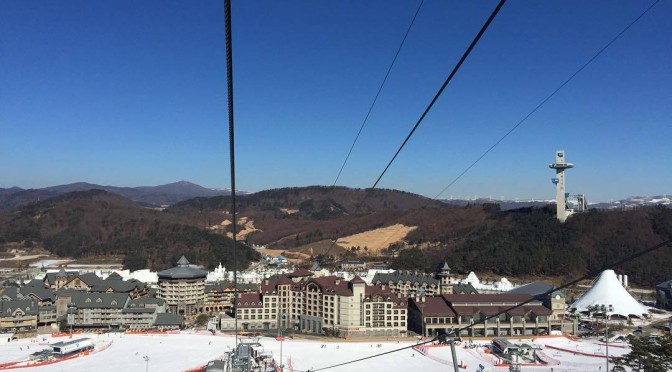 Jeongseon, South Korea – You never get a second chance to make a first impression, and it looks like PyeongChang 2018 is off to a great start with the men’s Audi FIS Ski World Cup events kicking off at the Jeongseon Alpine Center in South Korea this week with plenty of athlete praise, even though there’s almost no natural snow on the ground. This event will serve as the first official Olympic test for all sports in the 2018 Olympic Winter Games program.

The U.S. Ski Team men got their first look at the new Olympic downhill course on Wednesday, with a free ski session on the run. Initial reactions were positive from the men on both the course itself and snow quality.

“The hill is not particularly difficult, but will have its unique challenge to win,” U.S. Ski Team head men’s coach Sasha Rearick pointed out. “There are lots of blind rolls and jumps. The hill’s all about continuing to build momentum and keeping that momentum. It features big turns, but is not very technical. Lots of tucking. No real glide sections, no gnarly sections. Speed is not high yet bit could increase as snow gets faster.”

“There’s really no snow here…just kind of a couple of little dustings,” added U.S. Ski Team athlete Steven Nyman, of Utah. “Everything is manmade. It makes for great ski racing.”

There was much discussion early in the season about whether or not Jeongseon would be ready for the test events, but the organizing committee has done an incredible job of preparing the track for this event. The snow is smooth like butter, and feels a lot like snow the men know and love.

“The snow is similar to the Colorado snow that we train on in the fall, so we are comfortable here,” noted Marco Sullivan, of Squaw Valley, Calif.

“Track is perfectly prepared! Amazing, nice snow to ski,” added Rearick. “Safety is well done! It’s a great venue with a good warm-up right next to the race hill.”

Not only does the track feature perfectly prepared snow, it also boasts some sweet jumps. And the American Downhillers get stoked on flying.

“The jumps are fun and built nicely,” said Sullivan. “Most of us enjoy the jumps, so there is no holding back in those areas.”

Though the four big jumps on the track have not been officially named, the U.S. Ski Team and coaching staff has come up with a few of their own unofficial titles: Kimchi Kicker, Sushi Slapper, and Eggdrop Drop. As Sullivan explained to the AP after the training run on Thursday, “We haven’t named the finish jump yet. We’re trying to throw a little culture into the course.”

Norway continued to show off its World Cup dominance with Attacking Viking Kjetil Jansrud finishing with the fastest time. Austria’s Romed Baumann was second, .13 seconds out, and Italy’s Peter Fill third, .35 seconds out.

The American Downhillers have had positive things to say about the Korean experience as a whole.

“The snow is responsive and smooth and it feels really good on the body compared to what we’ve done the past few races – it’s nice,” reflected Nyman. “Bryce (Bennett), Wiley (Maple) and I walked through the town the other day and we didn’t fit anywhere. Surprisingly, not as many people stared at us as we thought they would – three big Neanderthals walking through town!”

“The hospitality has been really good with a lot of good food options for the guys,” noted Rearick. “It’s a long drive – one hour from hotel to venue is a bit tough but doable and will be a tiring week as a result.”

The women will have to opportunity to test out the Jeongseon Alpine Center with Audi FIS Ski World Cup downhill and super G events next season.