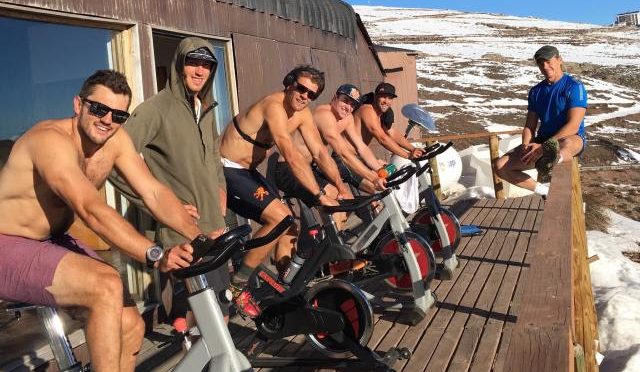 What is an American Downhiller, exactly? Sure, there’s a Levi’s denim vest adorned in a permanent marker-drawn American Flag and a Ullr Norse Ski God pin that’s been passed around, but there’s more. Let’s start there.

1.  Born in the USA, resilient, risk-taking, defy-all-odds badasses.
2.  A movement towards inspiring others to love the sport of ski racing.
3.  Long-lost cousin to Ullr, an obscure and enigmatic Norse god of winter (okay, that one is a stretch, but we had to throw it in there).
4.  A family. A unit. A band of brothers.

At the end of the 2016 season, Nyman was ranked sixth, a rank that matched his previous career best from 2015. However, he also did something no other American Downhiller had done before—not Tommy Moe, nor AJ Kitt, nor Daron Rahlves, nor even Bode Miller. Nyman grabbed four podiums in four consecutive World Cup races: Jeongseon (3rd), Chamonix (2nd), Kvitfjell (3rd) and St. Moritz (2nd). Not only does that streak bode well for Nyman at the 2017 World Championships in St. Moritz, but that kind of consistency also suggests good things for his quest to hoist the crystal globe.

“Obviously, to finish the season in the U.S. will be special, but with the way our team is currently performing—with my performances and Travis, Andrew, Ted, David, Mikaela, Lindsey and Julia returning—I think there’s going to be a lot to celebrate at the end of the year. For me, my big goal is that downhill title,” said Nyman. “I believe I can do it, and if I’m the first American male to ever win the downhill title, that would be a storybook ending in Aspen.”

To do that, though, they’ll have to fend off the dynamic duo of Attacking Vikings Aksel Lund Svindal and Kjetil Jansrud—along with the young Aleksander Aamodt Kilde—to contend with, ranked second, fourth and 12th, respectively, in the downhill standings in 2016, although Svindal is still recovering from a nagging knee injury. Ganong was ranked 11th last season. The Italians—Peter Fill is the reigning downhill champion—and the French will also be in the hunt, along with Nyman’s podium ping-pong comrade, Switzerland’s Beat Feuz.

Aspen has proven to be a bit of bad luck for the American Downhillers. Flashback to 1995 when the Los Angeles Times wrote about AJ Kitt, “He should change his name to HL (Hard Luck) Kitt.” In two years in Aspen, Kitt’s two victories were nullified by FIS due to weather. So, the last time an American Downhiller won on that track was Bill Johnson in 1984. Despite the fact that FIS stripped him of his wins, Kitt still walked away with two Roch Cup trophies, prize money and his pride, and rumor has it he even bought everyone in the stands a round of celebratory beers, too.

“I was a little bit of a lightning rod on the World Cup,” Kitt reflected. “I came over as a snot-nosed, take-no-bullshit-from-anybody kind of a guy ranked 70th in the world.” (Fun fact: Kitt is saved in Nyman’s phone under the title, “The Legend.”)

“Winning on home snow is pretty special,” said Kitt. “Not only because you have friends and family there, but it’s like ‘I’m here and I’m defending my turf.’ You’re always an outsider at World Cups because you’re never racing at home. So it’s special. The fact that Steven already realizes what that would mean is special.”

When Kitt was on the U.S. Ski Team, he and teammates like Tommy Moe and Kyle Rasmussen had to not only establish themselves, but establish their national team on the circuit. Now the current American Downhillers have a big opportunity to capitalize on their already proven status.

“Guys like Ganong and Steven can feed off each other, and all of the other guys can grab their coattails. There’s just so much more depth on that team than when I was racing,” said Kitt. “The fact that they’re focused on the title is good for them. To have an American take it would be epic, and if it can be done on home soil at Aspen, it would be unbelievable.

“Not to put any pressure on them,” Kitt said through a laugh.

Nyman has competed in NorAms on Aspen’s “America’s Downhill” track, which starts on Ruthie’s Run and sends racers into Aztec and Spring Pitch, creating one of the most challenging sequences of high-speed turns of any downhill in the world. He feels that the track suits his and Ganong’s style quite well.

“There’s a lot of gliding up top and some flowy sections on the bottom and a pretty demanding steep middle section on the Aztec pitch, so it’s something that can favor the Americans,” recalled Nyman. “Hopefully I’d have the title wrapped up before then, but if the title comes down to racing on that hill, I think it could benefit us. This isn’t just me—it’s something Travis and I talk about—to be the first to do that, and how special that would be.”

With all the past American Downhiller talent, it’s crazy to think that no one has ever won the title. Kitt was close to tasting the title in 1992, finishing third in the downhill standings. Nyman understands he has a daunting task ahead of him, but he wants all ski racing fans to know he and his teammates are ready for the task and the title is within reach. And one more thing: He’s not planning on retiring any time soon. Lucky us.