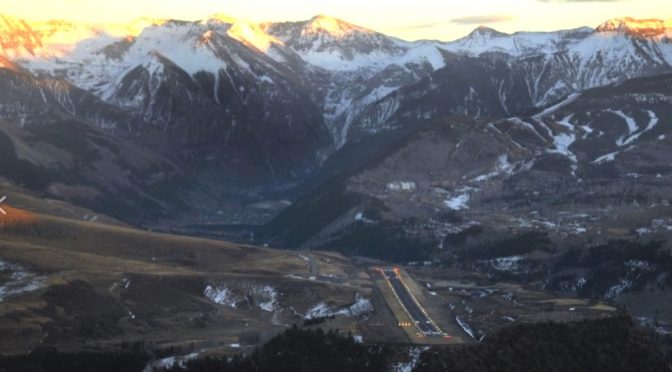 “Having commercial service return to Telluride is a great benefit for our guests and the community,” said Bill Jensen, CEO of Telluride Ski & Golf Resort. “While the majority of us will continue to rely on our established, frequent air service into the Montrose Regional Airport, this will provide another fantastic option for those looking to get to Telluride throughout the year.”

Colorado Flights also partners with United, Delta, American and Allegiant airlines on non-stop winter service to the Montrose Regional Airport, an hour and a half drive from Telluride, from Chicago, Newark, Atlanta, Houston, Dallas, Phoenix and Los Angeles.

Flights on Great Lakes will operate year-round with two or more daily flights during busier times of the year and one flight daily during slower periods. Great Lakes also will continue its relationship with United Airlines, allowing travelers to leverage United’s network and book directly through United.com.

“Commercial air service to TEX is hugely important to both visitors and residents alike, and we have been diligently working on its return for the past two years, exploring every possible option,” said Colorado Flights COO Matt Skinner. “Ultimately we are more than pleased to have our original partner, who knows the airport and the operation, back flying here.”

Great Lakes will fly the route with its 19-seat Beechcraft 1900 twin-engine turboprop planes that specialize in airports with short runways. That’s a good thing as Telluride Regional is the nation’s highest commercial airport at over 9,000 feet, and its 7,111-foot runway is one of the nation’s most spectacular. It sits 1,000 feet above the San Miguel River Valley atop Deep Creek Mesa near the ski resort, surrounded by 14,000-foot peaks with cliffs dropping away from either end of the runway. Fortunately for pilots and passengers alike, the runway’s infamous “dip” has recently been removed.