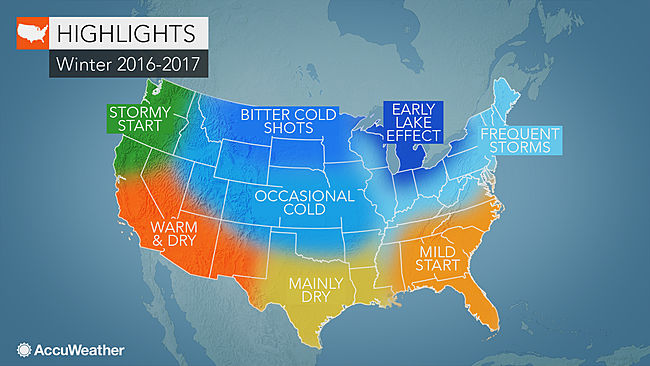 State College, PA – Skiers and snowboarders frustrated by last winter’s record-setting warm and dry conditions in the Northeast and Midwest will likely rejoice, after hearing Accuweather’s forecast for the winter ahead. Meanwhile, the National Oceanic and Atmospheric Administration (NOAA) has downgraded the strength of the La Niña event predicted for this winter.

In an outlook published yesterday, Accuweather meteorologists predict a cold, snowy winter from the Northern Plains stretching through to New England, with frequent storms decorating weather maps and average temperatures dipping 3-5ºF below last winter’s readings. They also expect a stormy start to winter 2016-17 in the Pacific Northwest and Northern California, and drier than normal conditions in the Southwest.

Residents in the Northern Plains and the Midwest can expect a return to regular blasts of Arctic air, more akin to what they’re accustomed to than the warm breezes that prevailed last winter, says AccuWeather Long-Range Forecaster Paul Pastelok. That cold air will usher in an early start to the snow season with frequent lake-effect snow events spilling off the Great Lakes.

Pastelok predicts that the wet, stormy start in the Pacific Northwest will begin to fade by January. He expects, however, that those early storms will largely bypass southern California, with warm, dry weather extending eastward across Arizona and the southern half of New Mexico. Those in the Rocky Mountain states can likely expect something in between, according to Accuweather’s forecast.

Pasterlok’s predictions largely mirror those of the NOAA Climate Prediction Center, primarily in the western U.S. where NOAA sees the northern Rockies and Michigan’s Upper Peninsula as the winter’s snowfall winners, and in the Southwest with drier and warmer conditions. Unlike Accuweather, NOAA predicts equal chances between warm and cold air, and between above- and below-normal precipitation in the Northeast. NOAA’s confidence in a La Niña pattern predominating this winter has waned in recent months, after the cool La Niña temperatures predicted by computer models to emerge this summer never materialized. It’s now at the point where NOAA’s Michelle L’Heureux now hypothesizes  that “there is a 40% chance of (La Niña), though if it emerges it is likely be very marginal or borderline.”

Of course, it’s rather early to start predicting what the winter ahead will hold in store. Only time will tell if Accuweather’s and NOAA’s predictions are accurate.