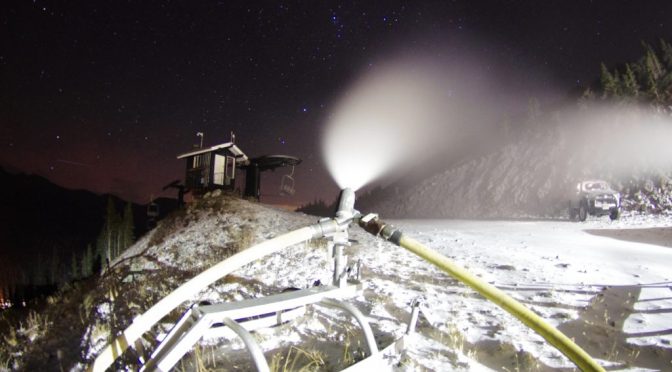 Loveland Pass, CO –  A pair of Colorado ski resorts, perennial contenders for first in the nation to open the ski season, fired up their snowmaking overnight to begin the race to opening day, while a third started making snow for the U.S. Ski Team.

Arapahoe Basin and Loveland Ski Area, set high in the Rocky Mountains on either side of the Continental Divide west of Denver, began making snow when nighttime temperatures dipped late last evening, helped along by a fresh dusting of natural snowfall.

“The cold temps arrived as expected and our snowmakers fired up the snow guns around 10 p.m. last night!” Loveland officials confirmed. “Mother Nature delivered on the temps and even brought along some snow of her own. The snow continues to fall this morning, both the natural and man-made variety, and we will continue to make snow as long as conditions permit.”

Nearby, snowmaker also went to work at Copper Mountain. That resort, however, first concentrates on preparing its race training center for the U.S. Ski Team to train ahead of the World Cup season before going to work on trails that it intends to open to the general public.

Both A-Basin and Loveland typically open each season sometime in October.