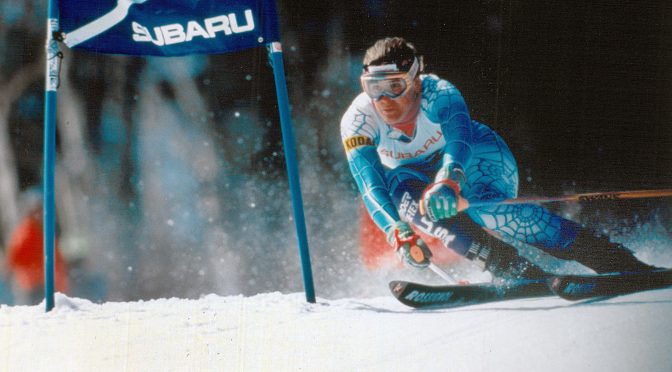 Waterville Valley, NH – The young ski racer stood outside the start house at the top of the mountain, a mix of Stevie Wonder, Zeppelin and Beatles playing in her ears. The U.S. Ski Team’s 19-year-old rising star out of Vermont’s Burke Mountain Academy was contemplating her first run lead in a World Cup giant slalom – a position she had never experienced before.

She grabbed her poles and twisted her torso to stretch, eyes looking down towards the finish. Below was a sea of spectators – friends, family – mom, dad, her brother. Scared? No, not at all. Confident? Yes – this was her day to win.

Easy to guess – Mikaela Shiffrin? No, but remarkable similarity. It was Julie Parisien (now Julie Nuce).

On the eve of the Audi FIS Ski World Cup in Killington, VT, the 45-year- old mother of four reminisced on that remarkable day in March of 1991 – the last time the White Circus visited New England – the day when she would be the first American World Cup winner in four seasons.

Coming out of Maine’s Lost Valley and then Sugarloaf resort, Parisien honed her skills at Burke, winning a Junior Worlds super G medal in 1989. Her storybook tale came in March of 1991. Flying under the radar, she came into a NorAm at tiny Ski Sunlight in Glenwood Springs, Colo. and beat a World Cup caliber GS field by nearly two seconds – much to the disbelief of the Europeans. Just 24 hours later in a World Cup at Vail, she proved it was no fluke, skiing to a career best fifth. Five days later, it was on to the Finals at Waterville Valley.

“After I crossed the finish, I just looked up at the stands and saw all those familiar faces,” said Parisien. “I saw my parents, our neighbors, my older brother JP – his hands up in the air screaming – I knew almost every face in the stands. I still treasure that photo.”

Parisien still reflects on her ski racing career over two decades ago. “I think about it all the time,” she stated. “I think I was good, and why didn’t I stick with it. I was a kid – really, just a kid. But I felt like I had to be so mature. Being a member of the U.S. Ski Team I felt we needed to be more grown up than we were.”

Shiffrin wasn’t born until four years after Parisien’s historic win. The two have never met. But the fellow Burkite’s quick rise to success has not been lost on the Maine native. When then 19-year- old Shiffrin led after the first run of the Olympic slalom in Sochi, Parisien reflected on her own Olympic moment at Meribel, France in 1992. Just 20, she led the first run of slalom but wound up out of the medals in fourth.

“I thought about that as I watched Mikaela in Sochi,” Parisien reminisced. “She won the first run, so did I. She was standing in the same position I was in 1992. I said, ‘she’s going to win – history cannot repeat herself.’”

After the Waterville win, she struggled to re-create the momentum. “I wish it had happened at the start of the season,” she recalled. “I didn’t get a chance to practice it. I have so much respect for these girls who win over and over. They have to be able to get that 100% focus that I captured that one day.”

She went on to win three World Cups, a World Championship medal and a spot in the U.S. Ski and Snowboard Hall of Fame. But she also battled emotions after her brother and mentor JP was killed by a drunk driver the next year. She retired after the 1998 Olympics.

Today, she finds her joy from raising three boys and a girl and being a hockey mom. She takes pride in her U.S. Ski Team career and the impact she had on her sport. And she looks back fondly on that March New England day when she found the inspiration and focus that every great athlete seeks.

“I was so completely focused. I don’t think anyone could have beaten me that day. I just knew I was going to win.”