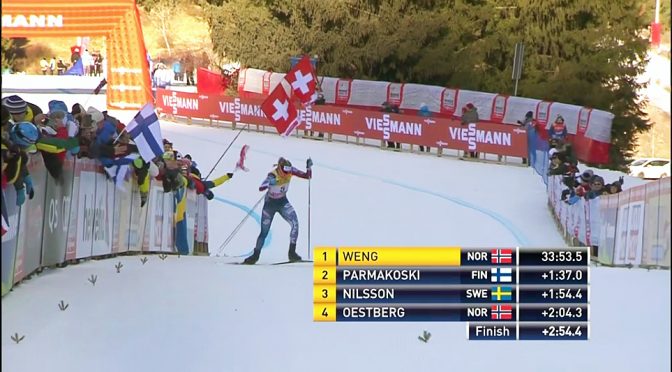 Val di Fiemme, Italy – Norwegian cross-country skier Heidi Weng stood atop Alpe Cermis screaming. Below, her teammate Ingvild Flugstad Oestberg was challenging Swede Stina Nilsson for third in the seventh and final stage of the Tour de Ski. The screams came with passion deep from within her burned out lungs. Two minutes earlier, she had won one of cross-country ski racing’s biggest prizes, passing out exhausted onto the snow.

The Tour de Ski is cross-country ski racing’s version of cycling’s Tour de France. Alpe Cermis is its Alpe d’Huez. Skiing up the nine kilometer face of the Italian ski resort is painful enough. But to do it after spending a week of pushing yourself well past the brink every day is beyond comprehension.

“It’s our Mt. Everest,” said Jessie Diggins of the U.S. Cross Country Ski Team, who won one of the seven stages and finished fifth in the Tour – matching the U.S. mark set by teammate Liz Stephen two years ago. “It’s the challenge of doing something so hard that most people in the world can’t or won’t do it. When you’re standing at the top look down you feel this huge sense of hard-earned accomplishment and say, ‘hey, I did that.'”

In 2008, the second year of the Tour, then 19-year-old Stephen saw a video of the climb with her idol Charlotte Kalla of Sweden chasing Finn Virpi Kuitunen stride for stride up the climb. On the final switchback, Kalla made an impressive move to pass then exploded up the hill to win.

“It was the first time I heard about the Tour,” said Stephen. “It was the most amazing thing I had ever seen – such a feat of mental and physical strength. Kalla just decided, ‘I want to win this thing.’ Immediately, I knew I wanted to do this event!”

The Tour began in 2007. The USA didn’t participate until 2010 and didn’t have a finisher until 2011. But in the years since, the Americans have become one of the most Tour’s most notable teams. In the past five years, four different Americans have won stages. Another three have had a top-three time.

“It took us a few years to get the hang of such an intensive multi-day event,” said Kikkan Randall, who was the first U.S. woman to finish in 2011. “But as we got the logistics and tactics figured out and started seeing success, the confidence for everyone has built and built.”

Randall was one of her sport’s first modern day star, inspiring athletes and using her platform to grow the sport. “The Tour de Ski has become a premier event for cross-country and has been really good for raising the profile of our sport,” she said. “The Tour is an event that many of our athletes make one of the major focal points of the season and it’s becoming a stronger event for us every year.”

Other teams have watched the American women with their face paint, glitter and funny socks and wondered what it was all about. It’s as tight-knit as a team or family can be. They are true soulmates in search of the same holy grail.

“As a team we’re mentally tough and very positive,” said Diggins. “We go into each stage as a  new day – a new opportunity to win. We don’t get bogged down by ‘yesterday.’ It’s easy to talk yourself out of a good result. Never mind what happened yesterday; today I’m going in to do my best.”

But a team is more than athletes.

“Our coaches and wax technicians – they’re everything,” said Diggins. “They work harder than we do. If you think it’s hard for us to climb Alpe Cermis, that’s what they do every day in ski testing. They sprint up the hill, glide test down, then do it again – three hours or more each day. They work their butts off to make our day successful. It’s take amazing stamina and humility.”

The U.S. Cross Country Team was given a small good luck token a  year ago by one of its most passionate supporters – a tiny turquoise bear. That little lucky charm was handcrafted by a member of the Zuni tribe in the American Southwest. The Zuni, a pueblo of the Navajo, believe the bear symbolizes strength, courage and healing.

As one of the team’s veterans, Stephen has kept a watchful eye on Diggins the last few years.

“It’s been fun for me to watch Jessie grow up as an athlete and as a person,” said Stephen. “She’s been like a little sister for me.”

Over Christmas, Stephen needed a confidence boost. So she went to Diggins and they talked. A day later, Diggins passed the bear off to Stephen as they headed into the Tour. “We all know Liz has these mad skills on the Tour,” joked teammate Sadie Bjornsen. Now it was Stephen’s choice as to who she would reward.

In stage six, it was all America with Diggins taking a 5k win in Toblach and Bjornsen third. On the long drive through the Dolomites to Predazzo that night, Stephen got to thinking.

“We don’t have as many ‘firsts’ any more,” she said. “Sadie had really shown some guts to get that first podium. And you never have another first. So the bear needed to go along with that moment.”

Much like Stephen, Bjornsen felt she needed a boost of confidence in the 5k earlier that day.

“When the going got tough, I just kept thinking, ‘what would Jessie do?'”

“The tour puts everyone on the same playing field,” said Bjornsen. “We all have the same fatigue, the same difficult travel between races, the same battle ahead each day. I love the “toughness” factor to it.”

For seven out of nine days, they have left every ounce of their being on the ski track. On New Year’s Eve day in Val Mustair, Switzerland, 65 women were on the start list. At the top of Alpe Cermis, there were only 31 remaining – earning a bond that can never be broken.

“We are dreamers, but we are also believers,” said Bjornsen. “It’s crazy how much confidence you can get from a teammate’s success if you allow yourself to stand beside them.”