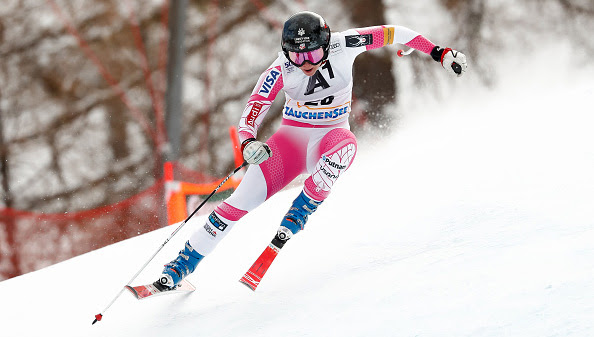 After three days of weather delays, the women ran an early morning downhill training run Sunday, and then headed back to the start for the real deal. The track at Altenmarkt proved faster for the later starters as Austria’s Christine Scheyer took her first career World Cup win coming from the 25th start position. Tina Weirather of Liechtenstein was second from the 17th start position. Wiles, whose previous career-best World Cup downhill result was 15th at Cortina d’Ampezzo in 2014, came from the 26th start position.

Scheyer had only ever stood on a European Cup podium twice and competed in a total of three World Cup downhill races prior to the day. But she had scored in all three, with a best result of ninth in Val d’Isere, and she knew she had the potential to be somewhat fast, at least within the top 10.

“No, not that fast,” she replied when asked if she knew she had winning speed. “I was fast in training, but this is amazing. … It’s great to be proud. And if an Austrian wins, I think it’s the best that can happen.”

Weirather was holding down the leader box when Scheyer overtook her, but she was still thrilled to finish the day in second place.

“It was amazing because at the start, I knew that Lara was leading and I was like, ‘Well, this could be a revival of the Junior World Champs where I won seven hundredths in front of her.’  So I was trying to believe that I could win,” Weirather said. “I knew it was going to be tricky just because the light changes and also [Scheyer] was so fast in training that I knew that she was going to be a tough one. And she did really well, so that’s fine. I haven’t been on the [downhill] podium in almost two years, so it still feels great.”

For Wiles, Sunday’s podium came at just the right time ahead of three weeks of speed events leading into the World Championships next month in Switzerland.

“To come down in third is a dream come true,” said Wiles, who took some time off over the holidays to recharge. “I’ve had a tough start to the season and seen so many expectations falling flat, so I really needed this and it couldn’t have come at a better time.

“This is definitely going to help my confidence moving forward. Hopefully I’ll have some good skiing coming,” she added.

Two top-10 ranked athletes heading into the day suffered season-ending injuries during the training run and were long-lined via helicopter off the slope. Nadia Fanchini of Italy sustained a fracture to her right humerus and also transverse process fractures in the lumbar vertebrae. She will undergo surgery in Italy and will miss the rest of the season. Edit Miklos of Hungary also crashed during the training run and sustained a severe right knee injury including unspecified ligament ruptures and a patella injury. She also sustained a less serious injury to her left knee.

Following two injuries and 322 days since her last race, Lindsey Vonn was rattled by the training crashes

“It was definitely a little bit nerve-wracking because of the crashes first run. And I just skied solid in the training run, but there was a big time difference,” stated Vonn. “You know, the track got considerably faster from my training run to the race. So it was hard to kind of find the timing. I felt like I wasn’t quite on my game.”

Nevertheless, Vonn was stoked not only to be to back racing for the first time on Sunday, but for her teammate Wiles, who is sponsored by the Lindsey Vonn Foundation.

“I’m really happy for Jackie,” said Vonn, who finished 13th. “I felt like I was skiing pretty well, just not quite on the limit yet. For me, it’s not really a matter of the results, I’m just happy to be racing again. Of course I have higher expectations for myself, but considering the condition and the fact that we had a training run and a race in the same day, I think it was pretty good.”

In Sunday’s race, four Americans stacked into the top 16 with Wiles leading the way. Laurenne Ross, of Bend, Ore. was 12th, followed by Vonn in 13th and Breezy Johnson, of Victor, Idaho, in 16th.

Switzerland’s Lara Gut finished fourth to cut into Mikaela Shiffrin’s overall World Cup lead. Shiffrin, who did not race Sunday, holds the lead with 1,008 points. Gut is second with 693, and Slovenia’s Ilka Stuhec, who was fifth Sunday, is third overall with 584 points. Stuhec continues to lead the overall World Cup downhill standings with 345 points.

Up next, the women head to Garmisch-Partenkirchen, Germany for downhill Saturday and super G on Sunday.