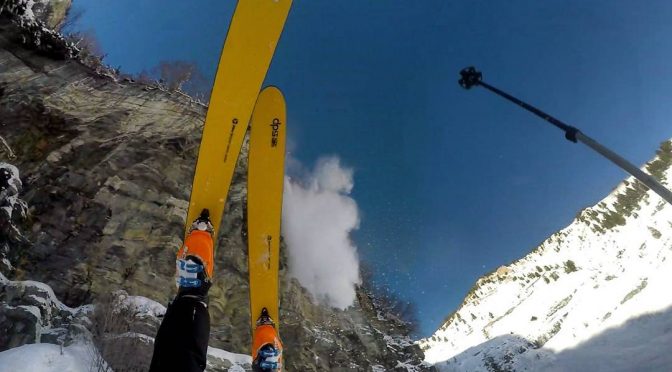 Mt. Timpanogos, UT – Utahan Devin Stratton can thank his lucky stars. After all, how many people accidentally ski off a 150-foot cliff and survive?

And he caught it all on his GoPro.

Stratton, 25, was skiing with some buddies in the Wasatch backcountry on Mt. Timpanogos above Provo when the incident occurred. Stratton came over a small mound and suddenly realized what was in front of him: a cliff that he estimates at 150 feet high. In his video you can see him slam on the brakes, but it was too late.

Stratton landed on his back in two and half feet of new snow, but the only casualties were a broken helmet and some other broken gear. Four days ago he posted his video to Instagram, and it has since gone viral:

Turns out I am afraid of heights… Miraculously I didn't even have a bruise! I did break a lot of gear including my helmet. Thanks to Matt for helping me dig for nearly 5 hours I found my lost ski and skied down. (See more of the video! Link in bio)