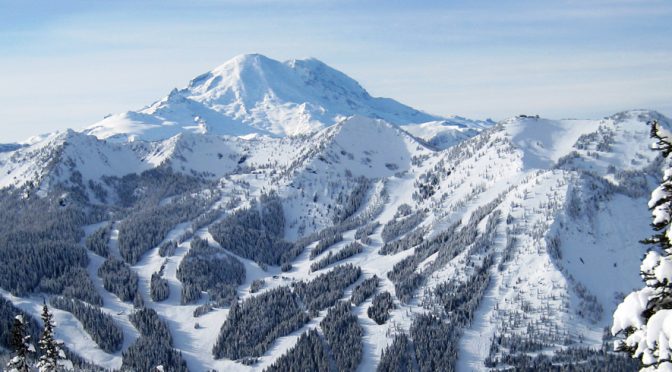 The incident occurred at around 11 a.m. on Tuesday when two skiers — males ages 23 and 30, one of whom was an employee of the mountain — entered the closed Southback as ski patrol was conducting avalanche control work.

Crystal Mountain has never before invoked a 2011 Washington State statute that arose from a bill introduced by a state legislator who is himself a Crystal Mountain ski patroller. That statute finds “a person is guilty of a misdemeanor if the person knowingly skis in an area or on a ski trail, owned or controlled by a ski area operator, that is closed to the public and that has signs posted indicating the closure.”

This, however, was a fairly egregious violation. The pair apparently entered the Southback just after patrollers had lit the fuse on two separate explosive hand charges. One detonated approximately 100 yards above the skiers and caused a small slide, while the second charge detonated adjacent to the skiers and provoked a rather large avalanche.

Although one skier attempted to flee from patrollers, both were apprehended and turned over to authorities. Each man faces a fine of up to $1,000, and the one who was an employee has found his employment terminated.

“We take our closures seriously,” confirms Crystal Mountain Ski Patrol Director Kim Kircher, who declined to identify either man who was charged. “We only close terrain when it is necessary, so if it’s closed, then there’s a reason. Please do not duck the ropes.”

This week’s incident wasn’t the first close call between Crystal skiers and large firecrackers. In December 2012, a wayward skier ducked a control rope leading to the Employee Housing slide path just as patroller Christina von Mertens tossed a lit 25-lb. charge from a hovering helicopter. That skier escaped without being apprehended, and barely escaped with his life.