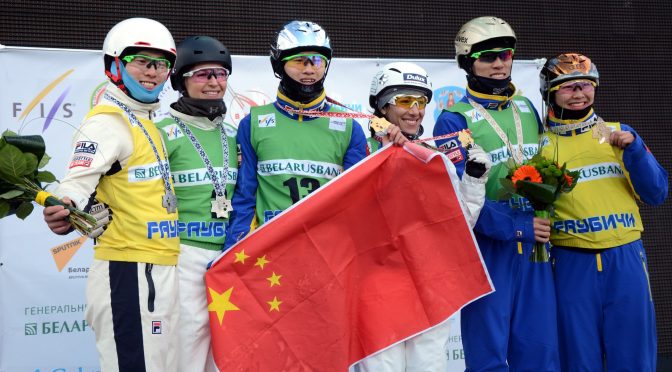 Minsk, Belarus – Wind and variable snow conditions made it a tough training and competition week in Minsk, but those obstacles were overcome by China’s Wang Xindi and Australia’s Lydia Lassila in Saturday’s FIS Freestyle World Cup aerials competition in Belarus.

“The conditions were difficult and we just didn’t have enough speed,” said Bohonnon. “After a tough day of training yesterday, we all felt a little flat going into today, so for Eric, Bowen and I to go through each round and make it to the super final was a success for us. I would much rather have been on the podium but, considering the conditions, I’m happy to come away with another close finish.”

Finishing second on the day, Qi gained another 80 points in the ranking to secure the aerials World Cup title. He will be awarded his crystal globe at the season’s grand finale in Moscow. Anton Kushnir of Belarus, who did not compete in Minsk, sits in second with 308 points, followed by Bohonnon with 288.

On the women’s side, Lassila took her second win of the season, with teammate Danielle Scott in second and China’s Xu Mengtao in third. The U.S. women were unable to advance any jumpers into the final rounds. Kiley McKinnon, of Madison, Conn., was the top U.S. finisher, landing just outside the finals cutoff in 13th.

With only one more competition left to wrap up the aerials World Cup season, Scott sits on top of the leaderboard with 402 points and only two points ahead of second Xu. We should expect nothing but a pretty tight battle between those two in Russia. While Scott and Xu are clearly ahead of the pack and above the reach of any other athlete, the battle for third place is still wide open with Lassila moving up in the ranking just behind the leading duo with 254 total points.

The aerials World Cup season concludes this weekend with a final competition in Moscow, Russia on March 4.