Here's how to stream the eclipse
https://lifehacker.com/how-to-stream-the-only-total-solar-eclipse-of-the-year-1845868828

Tony, Since you are posting does that mean you made it through EZE?
Click to expand...

Yes, we had a a ton of paperwork which we had to e-mail to AstroTrails in England before we left Dec. 10 and we brought paper copies with us.

LAX check-in was normal like a domestic flight except that we had to do it in person, not online in advance.

In DFW there was a big line where we had to show one of the forms that we had been pre-approved for admission to Argentina. There are only 180 non-South Americans with permission, all specifically for the purpose of viewing the eclipse, until after Dec. 15. Then we had a temperature check before boarding the plane.

The Sheraton hotel where we are staying and the bus tour today (Dec. 13) had temperature checks and sanitize spritzes every time you entered the lobby or got on the bus. We got off the bus several times for garden walks and also for a steak lunch, which was outside.

Buenos Aires weather is superficially similar to Japan or East Coast USA in terrms of average temperature and quantity and incidence of rain. But the extremes are more moderate, 3-5 degrees cooler in summer and warmer in winter. Thus freezing is rare and jacaranda purple flowers were in full bloom as they are in the opposite months in SoCal. There were also some palm trees in the rose garden we visited. It was mid-80's F and humid but often there was a breeze to be more comfortable.

We all met for COVID PCR tests at 7PM Friday and received negative results this morning. We checked into the hotel about noon and were pleasantly surprised not to be on lockdown for the afternoon. So we walked around for few hours, exchanged money at the blue dollar rate (10x what it was 5 years ago when I last skied Las Lenas) and checked some shopping options for Liz. After the COVID test 4 of us we went out for dinner, a first rate Italian meal at Basa with a bottle of wine for $100 including a generous tip. The restaurant had adequately spaced tables and no surprise had few diners when we arrived 9PM but was full when we left at 11PM.

We're up very early tomorrow to fly to Bariloche. Eclipse day is Monday, then a full day of tours by bus and boat Tuesday with stargazing late that evening. We return to Buenos Aires late afternoon on the 16th and head home late on the evening of the 17th.

Thanks for the update. I was wondering if they asked you not to post.

I was looking for LiveStream and saw that it looks like Argentina was a better call than Chile where it looked foggy.

https://www.youtube.com/watch?v=zEHcZE4qcDE says not much over 30 mins to go for totality.

Staff member
We just got back to Bariloche from the eclipse: very successful, best shadow bands I’ve seen. There was thin cloud for first 20 seconds so two people got pictures of the shadow bands on the clouds like the famous pictures from Polynesia in 2010. Lots of prominences, at least 4 big ones.

Streaming was probably from Chile where weather was worse. Pucon was mostly clouded out as predicted, but someone on SEML reported success from the Chilean coast. There was also a flight over the Pacific in some kind of aircraft with unusually high windows. The sun was 72 degrees high in the sky where we were at Fortin Nogueira (estancia north of Piedra del Aguila on route 237 in Argentina) and likely 65 degrees or so from the aircraft. It was extremely windy at Fortin Nogueira but we positioned behind a row of windbreak trees so it was comfortable and people could set up high end photography gear.

There are only 180 non-South Americans with permission
Click to expand...

The AstroTrails tour company negotiated for 180 special Argentine permits. In reality only 89 were used, 38 of them by our group. I'm sure there were more visitors to Chile but I don't know how many more.

We took few pictures but should get access to excellent ones from Larry Stevens and Judy Flayderman.

Staff member
Shadow bands on cloud by Andreas Moller at our location: 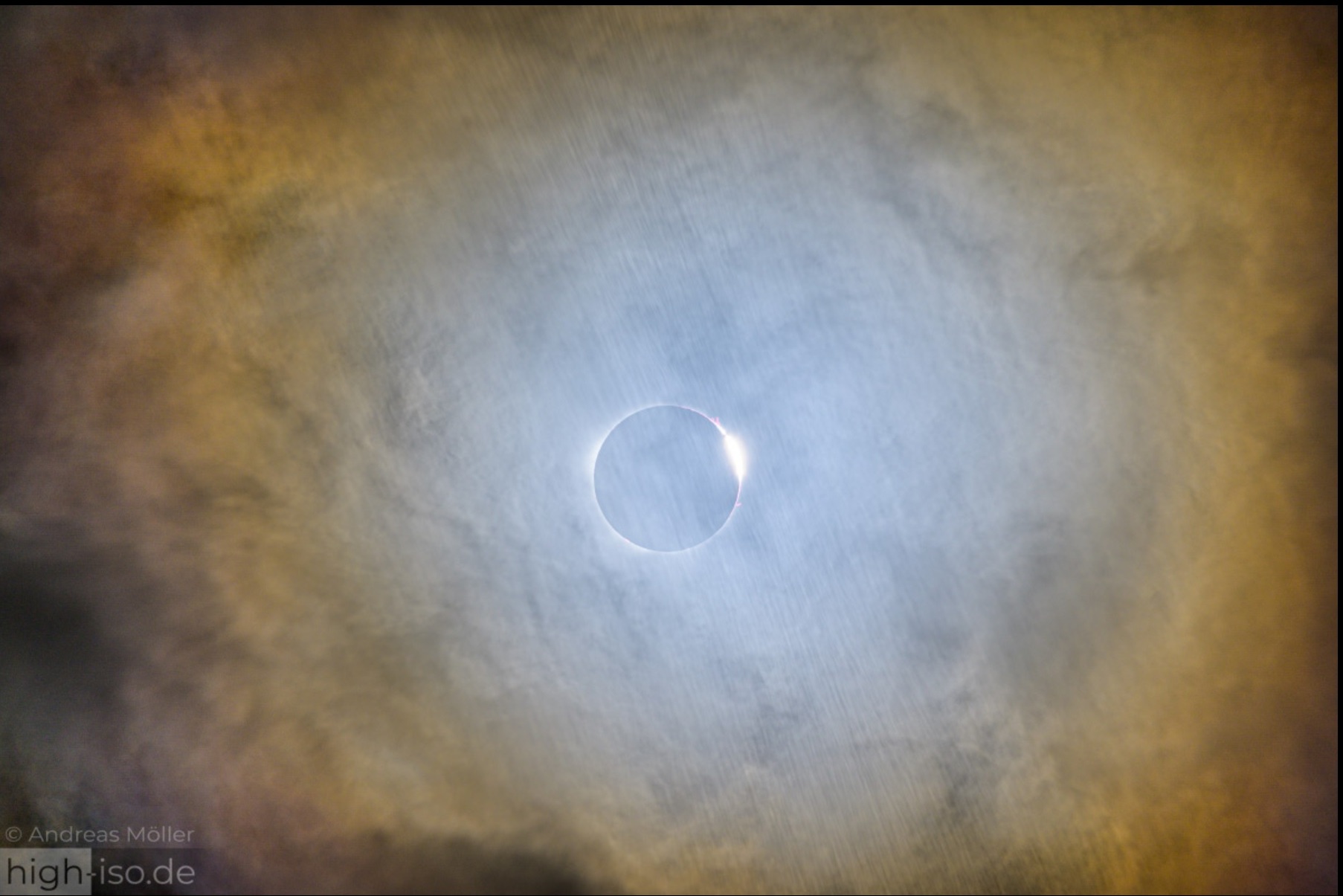 The thin clouds lasted the first 25 seconds of the 2 minute 5 second totality.

Good view of prominences from Tolten near the Chilean coast: 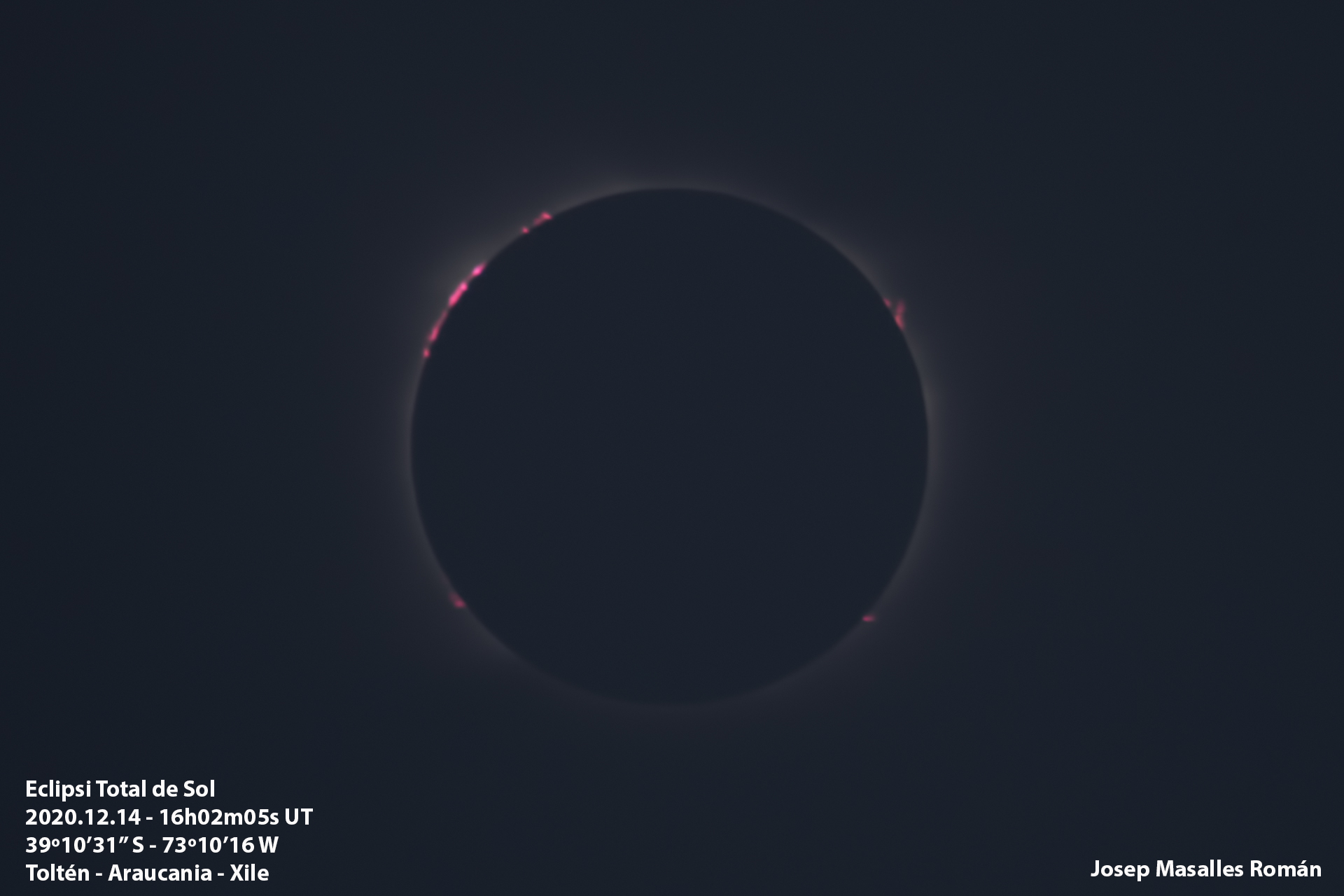 Two people from Scotland did not get their PCR test results in time and were not allowed to go on the trip. 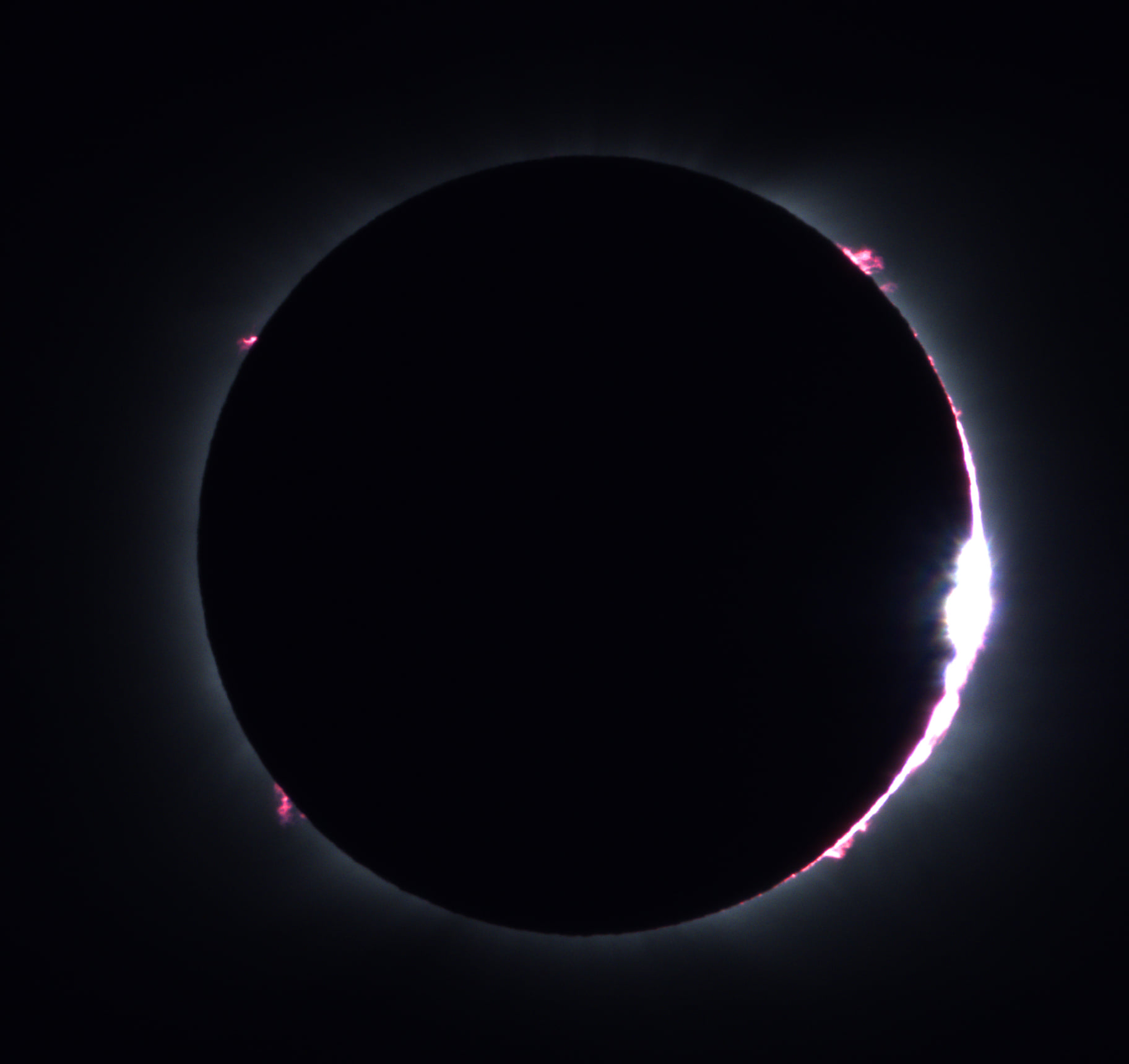 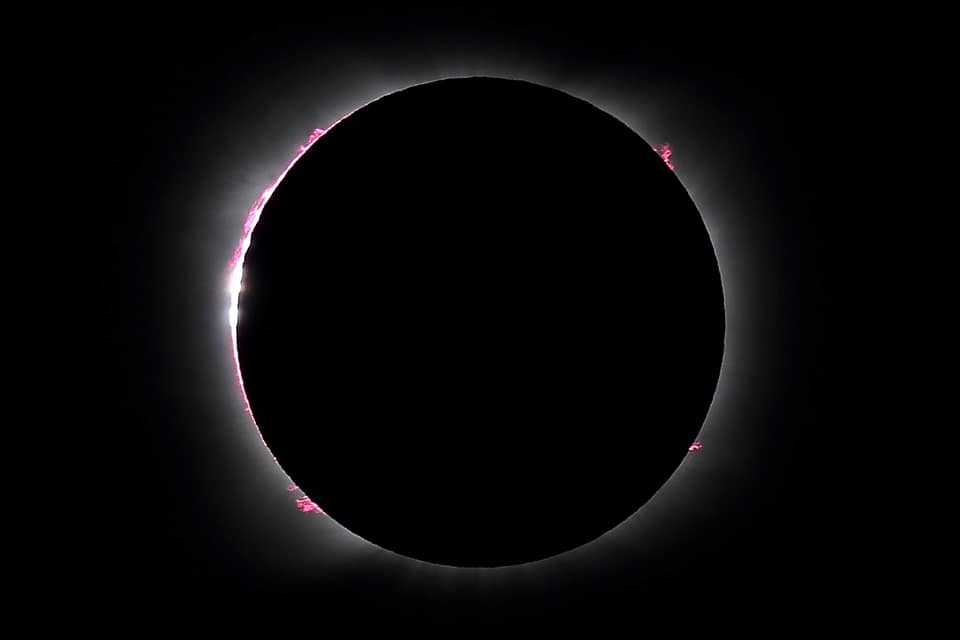 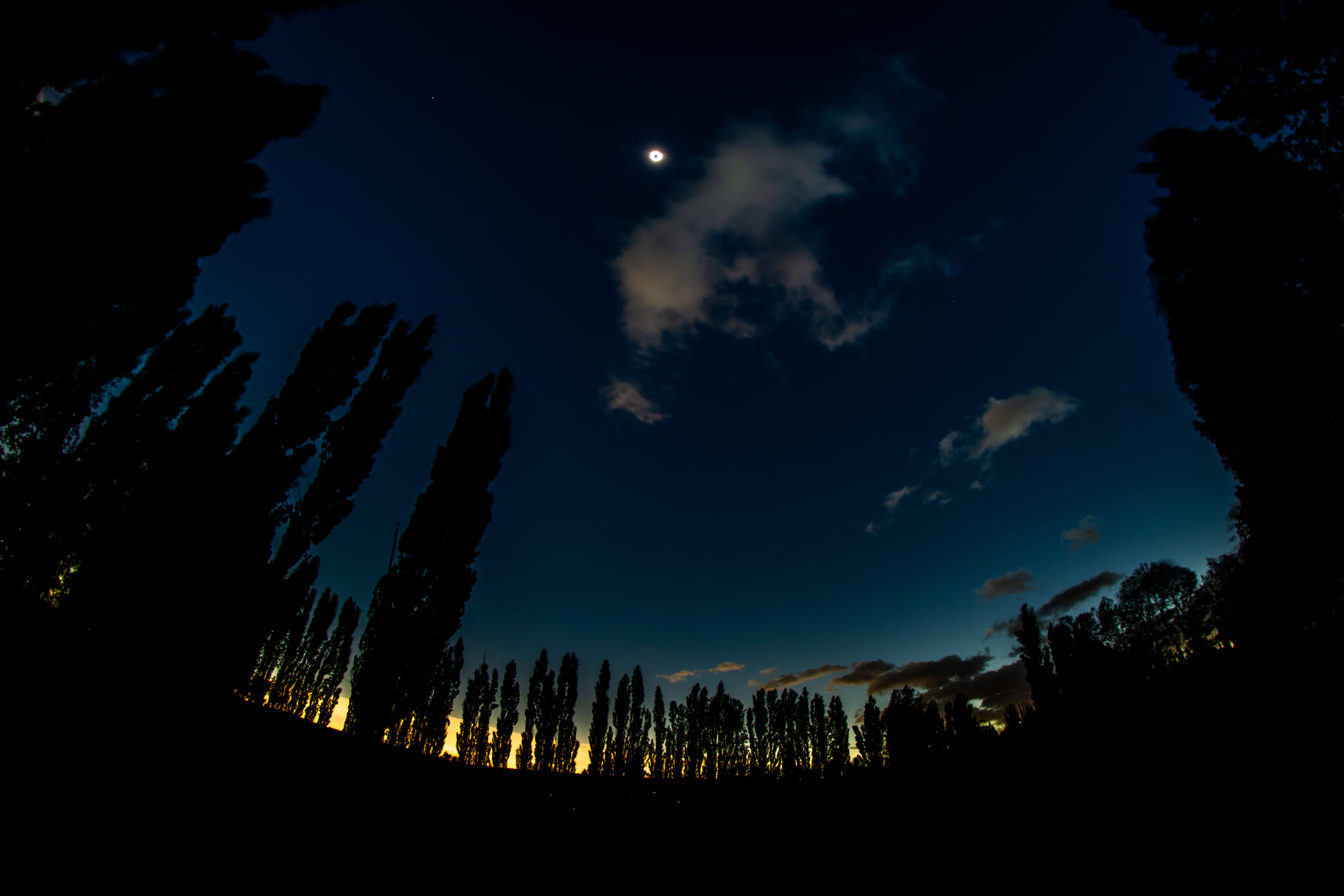 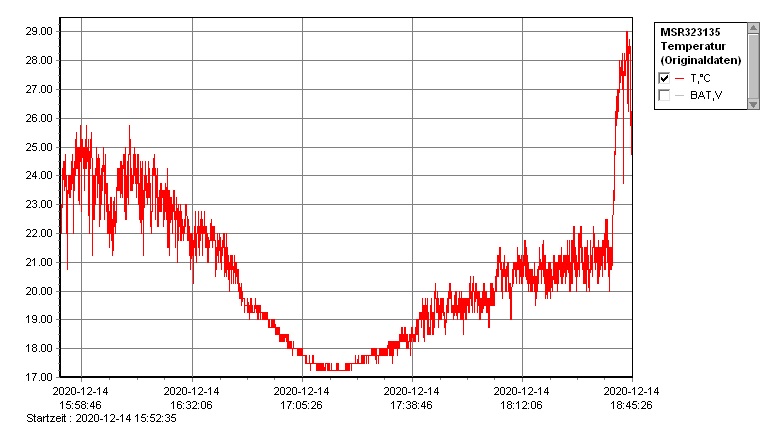 AstroTrails groups before heading back to Neuquen or Bariloche: 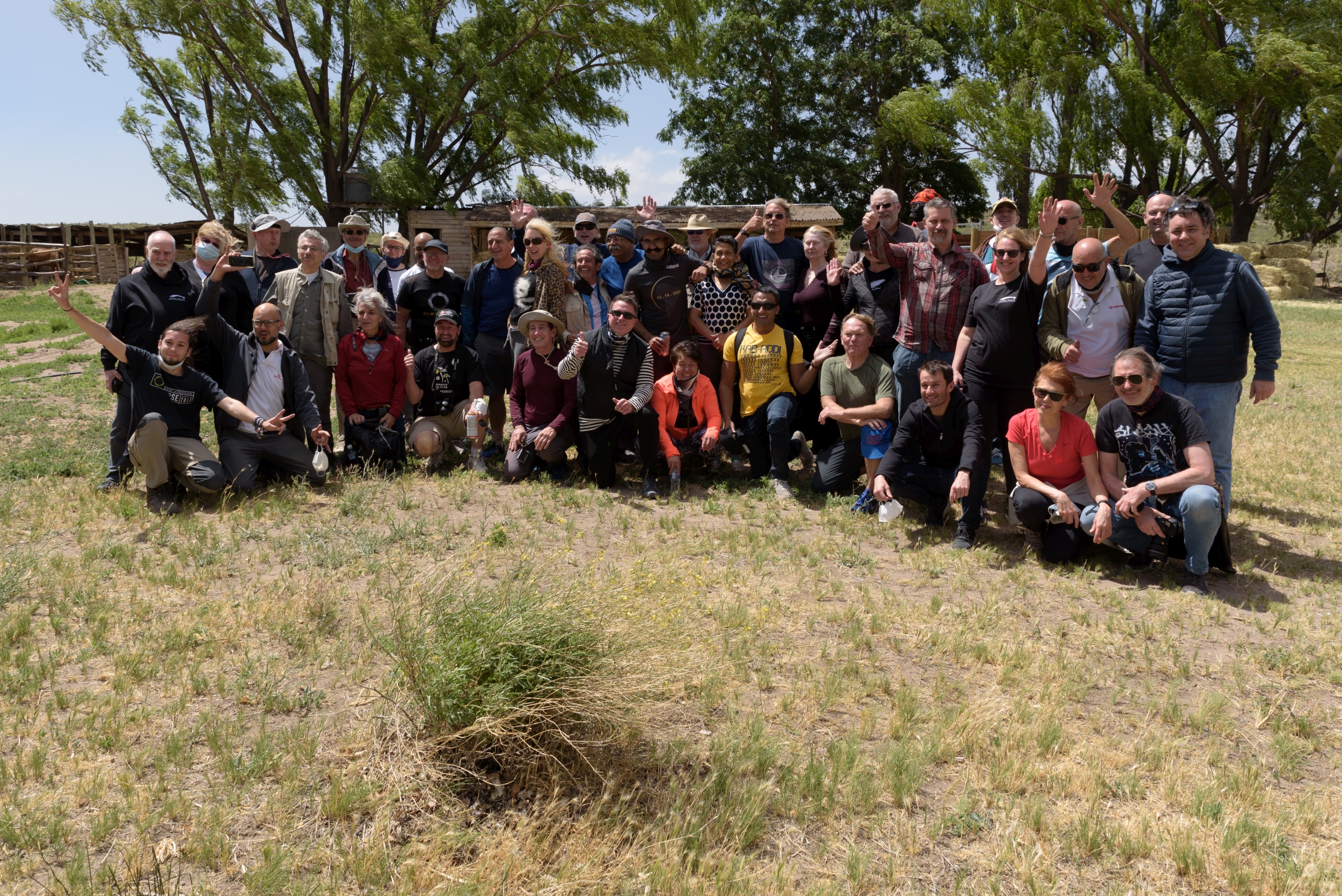 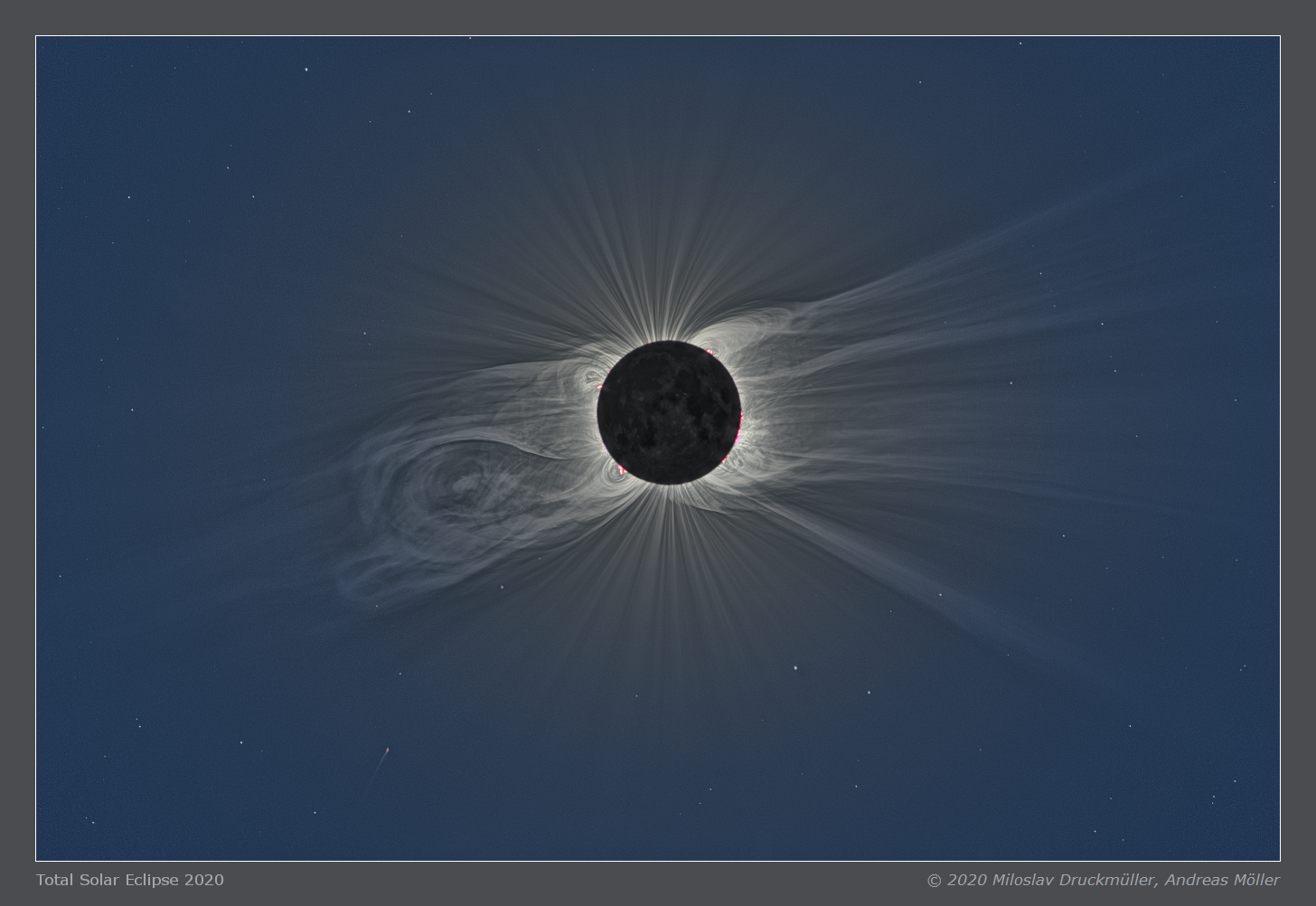 There were two comets visible during totality, zoom insets of them here: 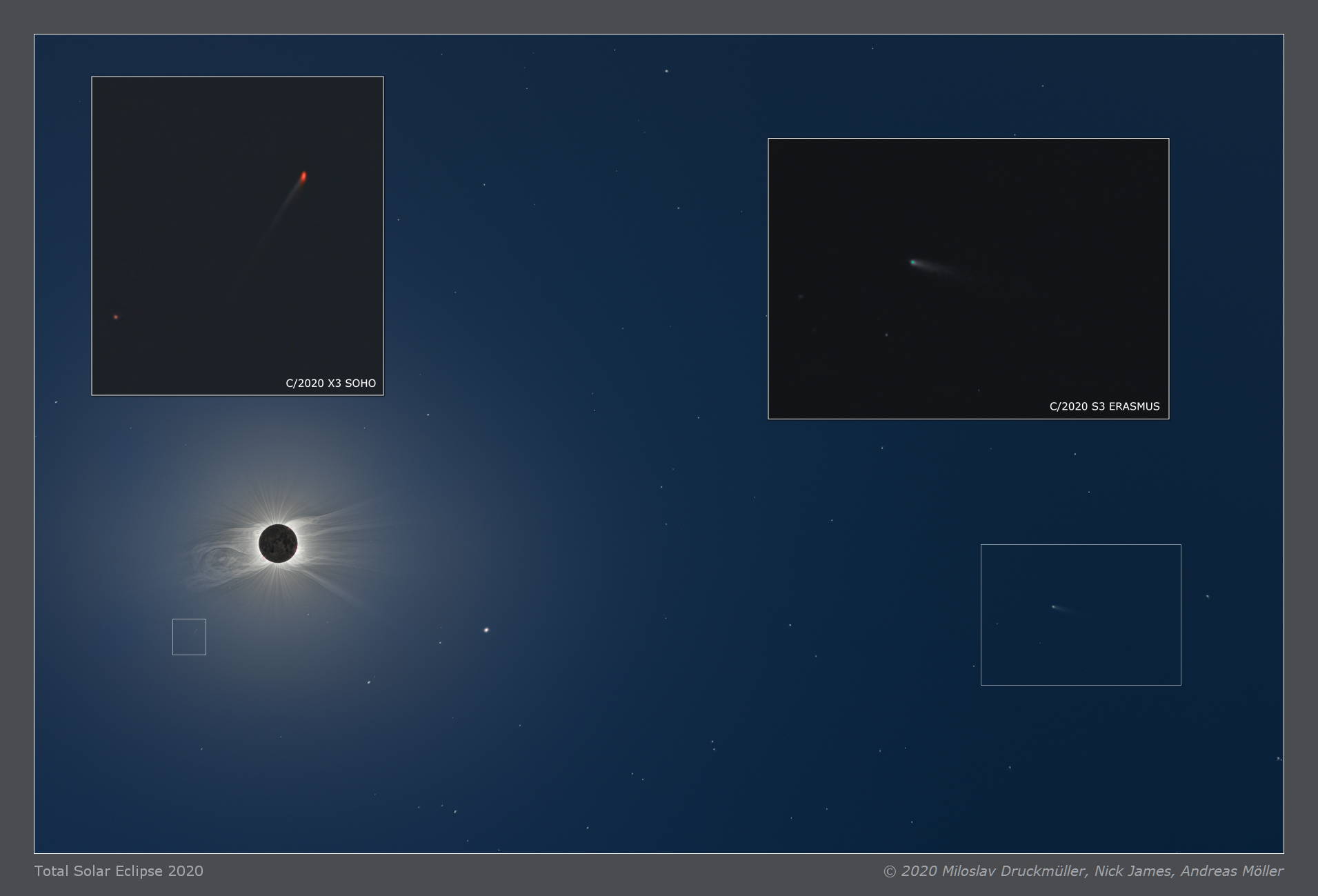 What do you mean by first, second, third contact?

Staff member
First and fourth contacts are when the moon takes its first and last bites out of the sun. Second contact is when the moon first covers the sun completely in a total eclipse or the sun first forms a complete ring around the moon in an annular eclipse. Third contact is the end of totality or annularity.

There is an annular eclipse coming up on June 10; It's mostly in the Arctic with poor weather prospects and the Canadian border is still closed. If it had been total I probably would be on this flight.

While certainly won't be traipsing around the world for eclipses the way Tony does, it is totally worth a reasonable domestic trip to go find totality. The next one for the US is in April 2024 as I recall. Roughly a northeastward slash from Texas through buffalo/Rochester etc.. areas. I'm sure I'll find a way to be somewhere along that line.

Staff member
I'm sure EMSC will be tempted to visit family in the Finger Lakes region. But here's the detailed weather analysis from Jay Anderson.

The overriding trend is that cloudiness gets steadily worse as the eclipse track moves from SW to NE. There are microclimate nuances which Jay discusses. For easterners the most favorable locations are along the south shores of Lakes Erie and Ontario. Rochester is an easy daytrip for EMSC's relatives. However, Rochester and Cleveland, the clearest points on the eastern part of the track, are still 60% average cloud, more than any point on the track west of the Mississippi.

East of the Champlain Valley the climate becomes even more consistently cloudy. For those wanting to ski, the climate odds are better at Whiteface than farther east.

The bottom line for anyone in the eastern part of the track is to maintain maximum flexibility and base your call on weather forecasts a day or two ahead. And maybe you should have a Southwest Airlines ticket to Austin or San Antonio as a backup plan. Liz and I expect to be in Mexico, which should come as no surprise if you read Jay's climate analysis.

Tony Crocker":36j2mfa2 said:
I'm sure EMSC will be tempted to visit family in the Finger Lakes region.
Click to expand...

If the eclipse were in summer or early parts of fall that might be a really good option, but having grown up there, I know all too well that while sunnier than say Janaury, it's still cloudy more often than not in April. Given the relatively short hop I'm actually thinking maybe Texas hill country might be a decent option depending on the spring storm cycle timing. Fly into Austin or San Antonio and then drive west kind of thing.
You must log in or register to reply here.
Share:
Facebook Twitter Reddit Pinterest Tumblr WhatsApp Email Share Link
Top