Staff member
Joel Gratz at http://opensnow.com/dailysnow/colorado had been calling Monday as a likely powder day of 6-10 inches from an upslope storm working its way up from the south, similar to a week ago. The open ski areas did get about 8 inches, but half it fell Saturday afternoon and evening and the other half during the day Sunday. The major storm Sunday night only got into the mountains as far north as Monarch. Lots of people must have been reading the forecasts, because we arrived at A-Basin at 9:06AM (via the tunnel because Loveland Pass was closed) and the main parking lot was full so we were exiled to the upper lot across the road. View from there: 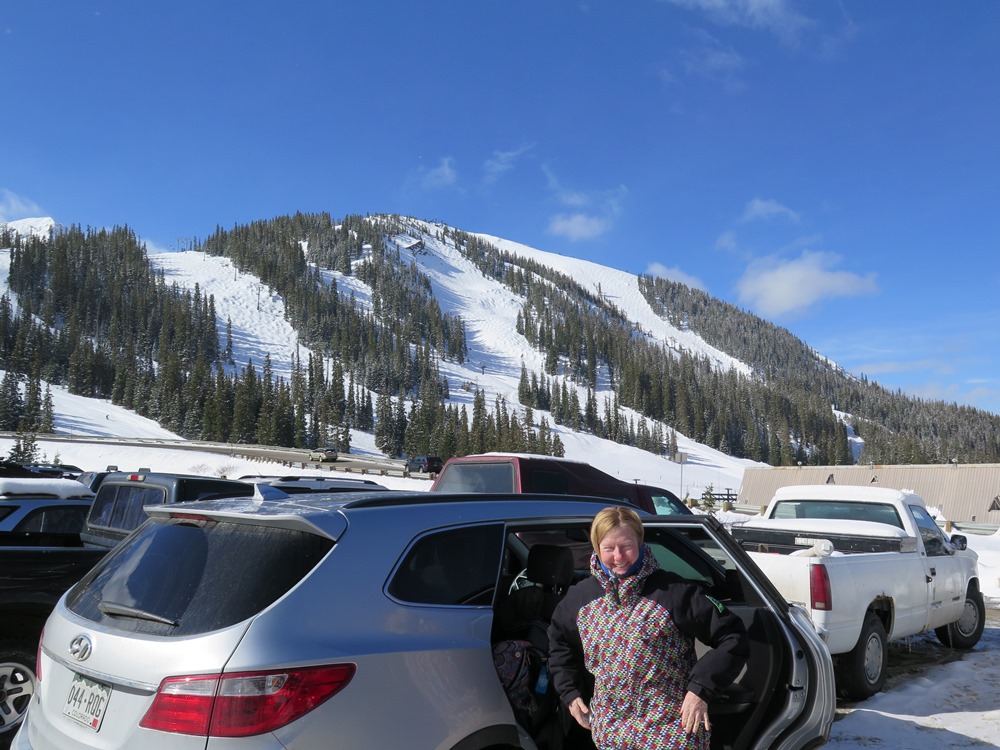 Closer view of East Wall with bootpackers on Willy’s Wide. 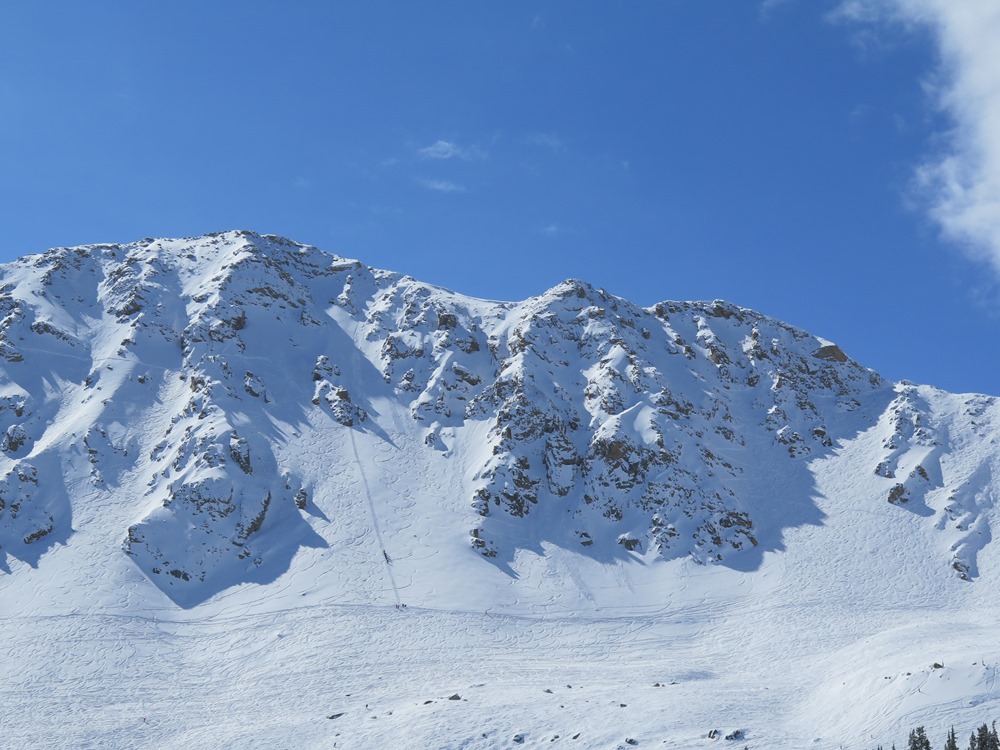 The 3 ticket windows were also backed up at least 10 minutes with visitors who had come from as far as Jackson Hole. We reached the top of the mountain to start skiing at 10AM. Fortunately lift capacity was adequate to keep lift lines down to 2-3 minutes. It may not have been the predicted powder, but it was still an excellent ski day. 80+% of the mountain had winter snow to start the day. It was sunny and got up to ~45F midday, so all but the north facing steeps softened during the day. But as I’ve experienced at Baldy and Mammoth, the first day transition to spring snow is great skiing bell-to-bell. It won’t be like that the next day, but this is not our problem as we’re leaving Colorado for the next 10 days.

Liz had never seen Zuma and I had only skied a couple of runs there. We skied a couple of packed powder groomers and a couple of traverses far skier’s left for leftover powder scraps. The second time we got all the way out to the trees of Torrey’s, where I tripped over a barely exposed tree root. 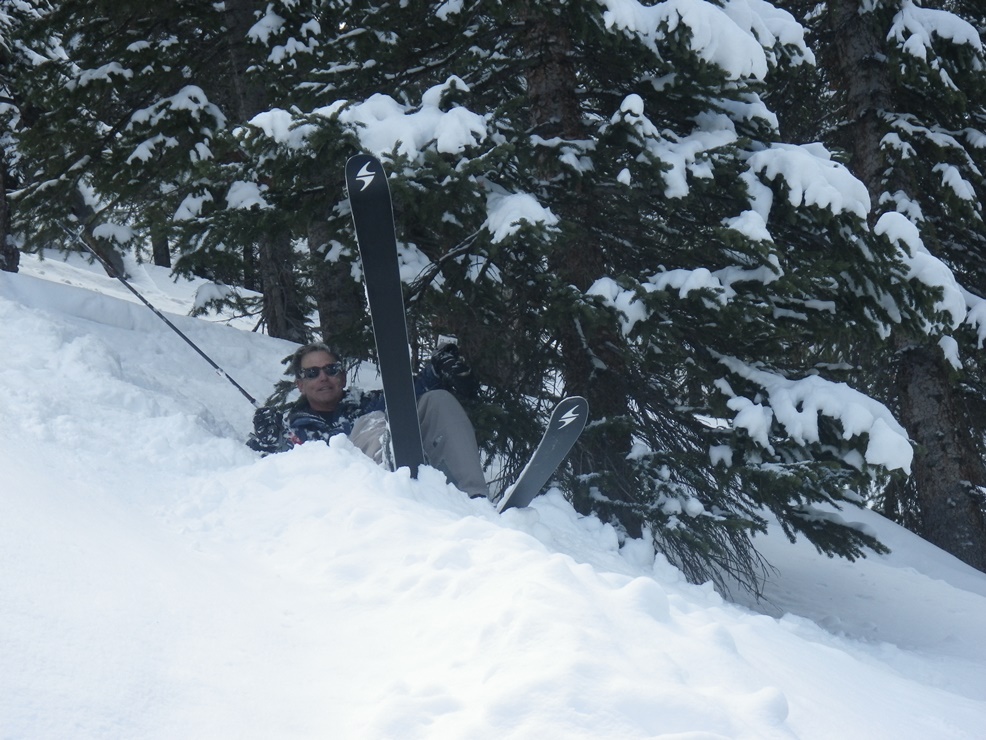 For my final Zuma run I walked up to Zuma Cornice. 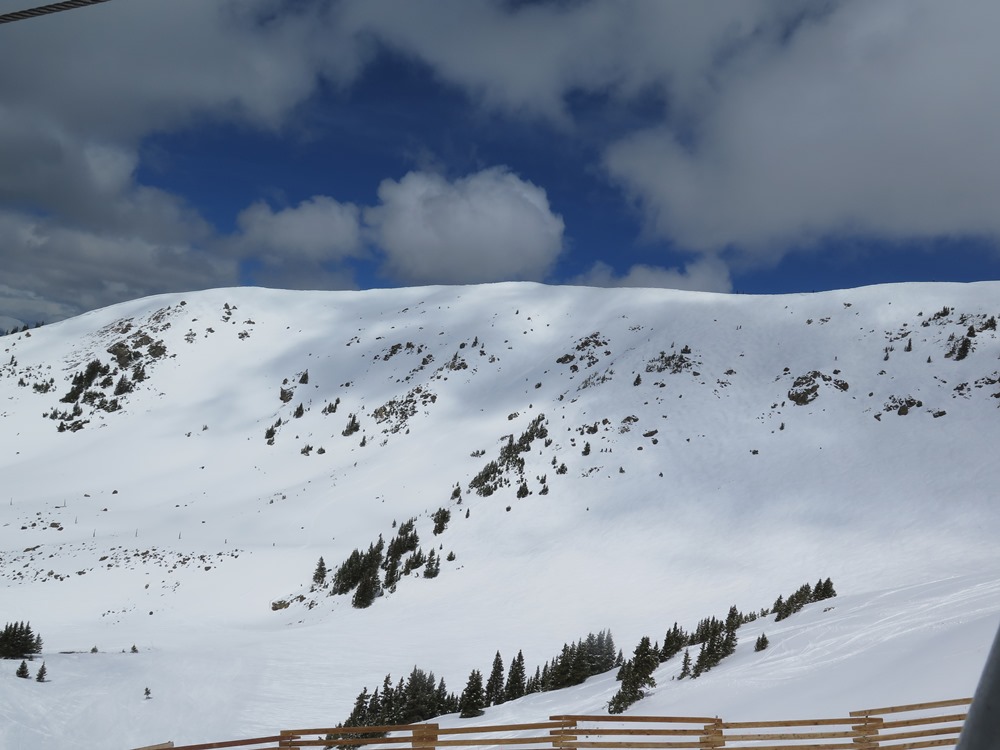 The bowls farthest left in the picture above looked like butter smooth corn but were roped off, so I skied Durrance, immediately looker’s right of the longest spine of rocks. At 11:30AM these south facing shots were very soft and bumps already forming.

We returned to the front side, alternating Lenawee groomers and a couple of East Wall traverses, where people are still hiking Willy’s Wide. 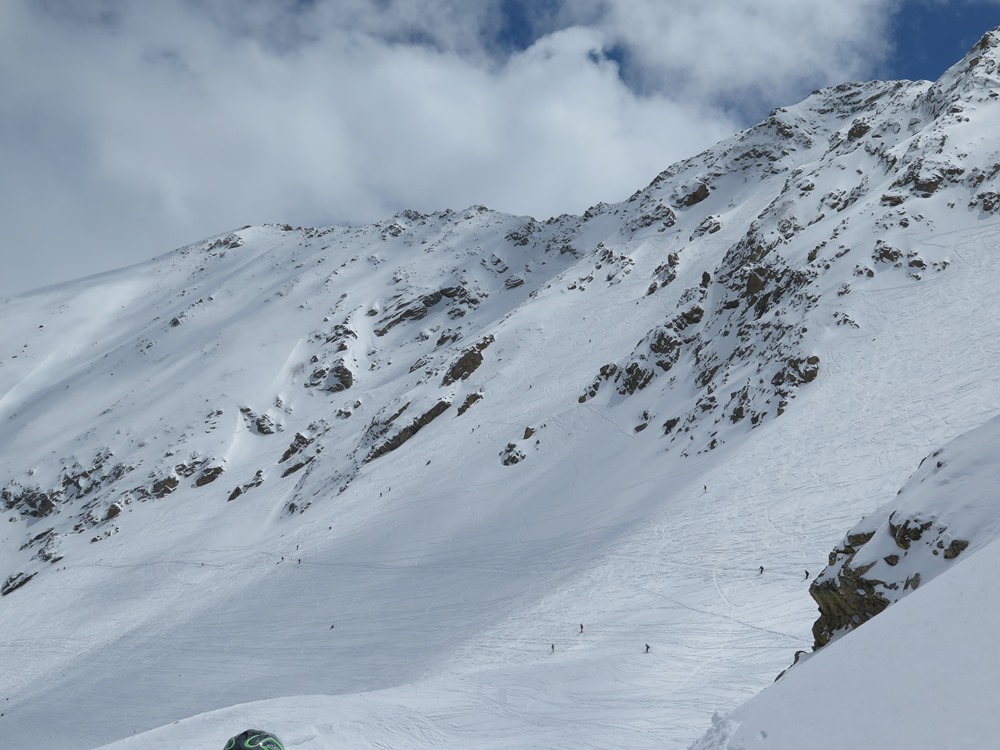 Here’s a view up North Pole, probably a half hour hike from the top of Lenawee. 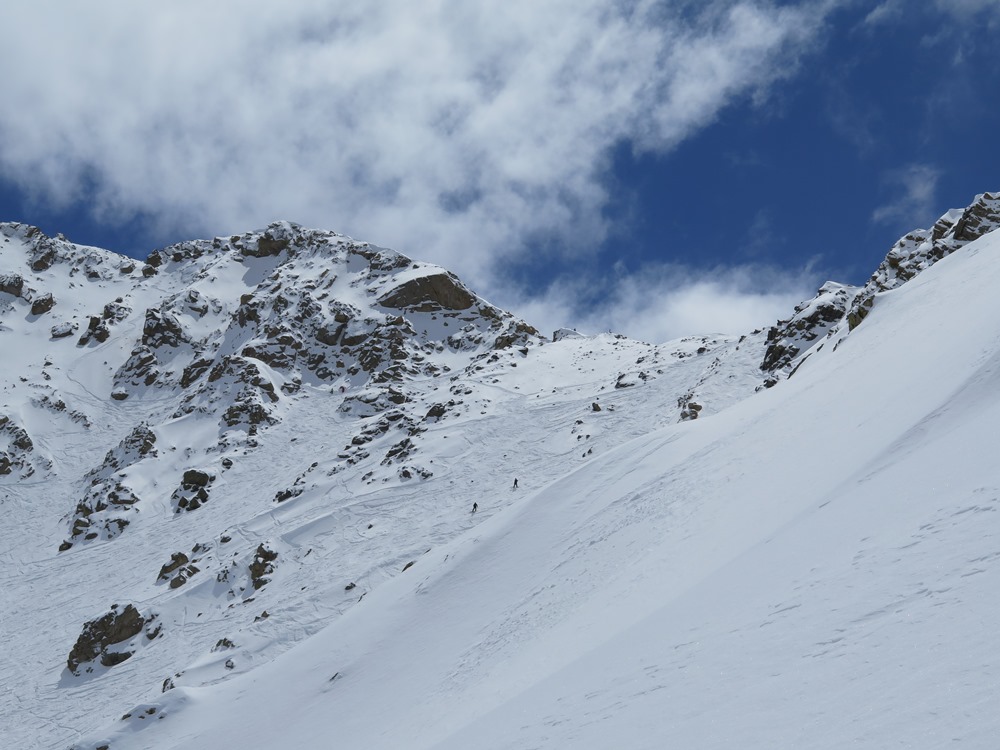 Around 1PM we skied down to Pallavicini chair. Upper Pali profile: 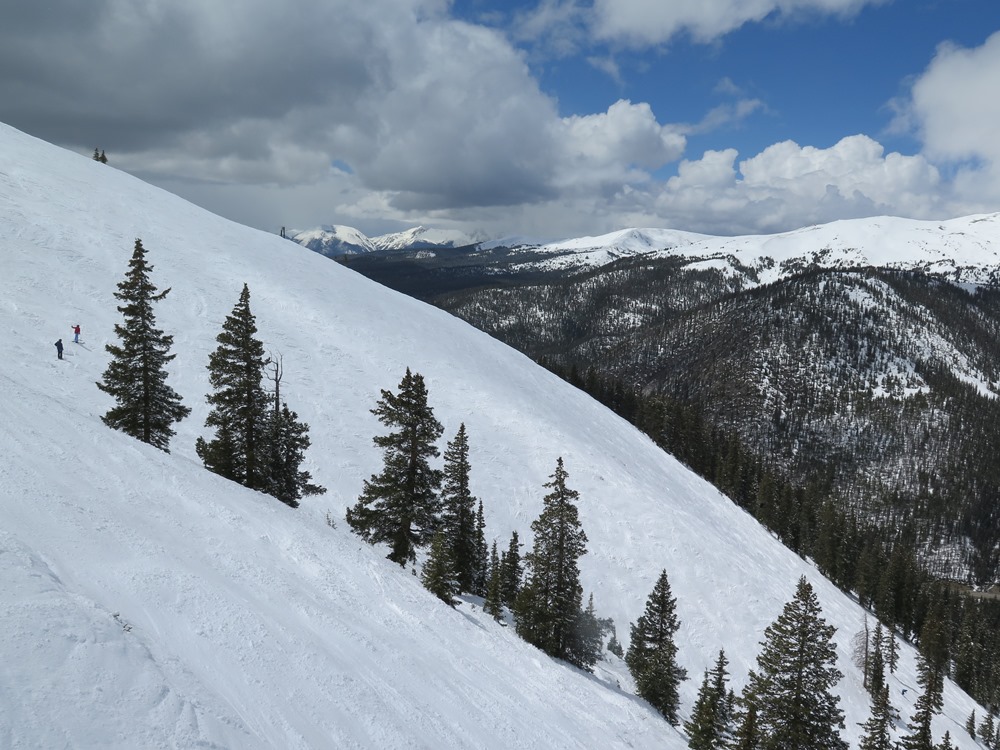 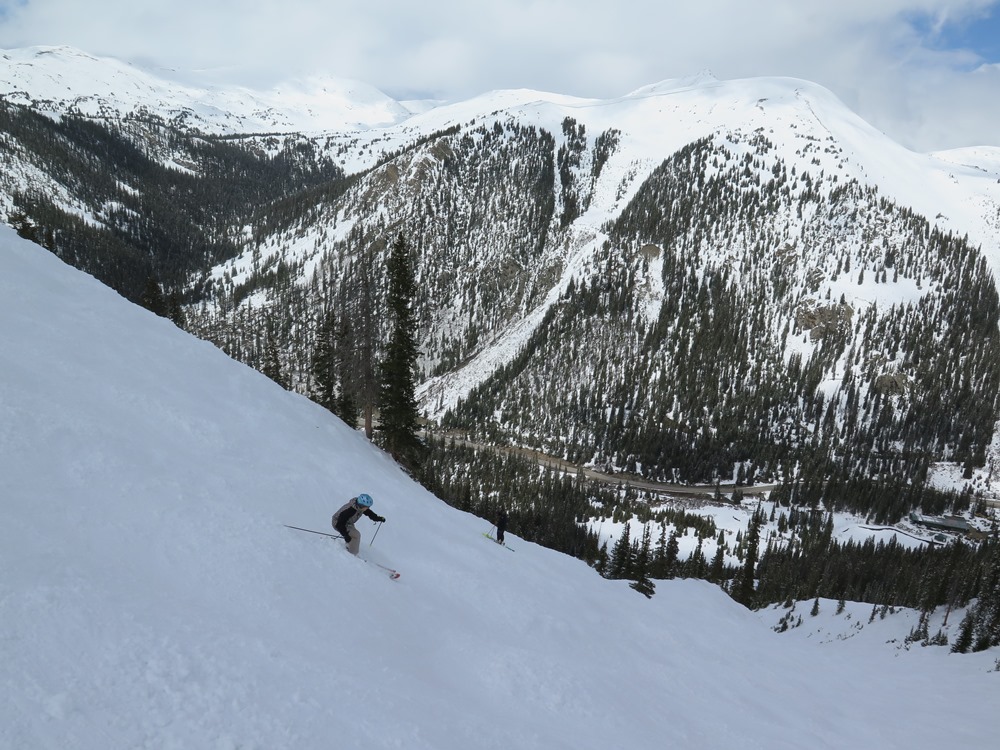 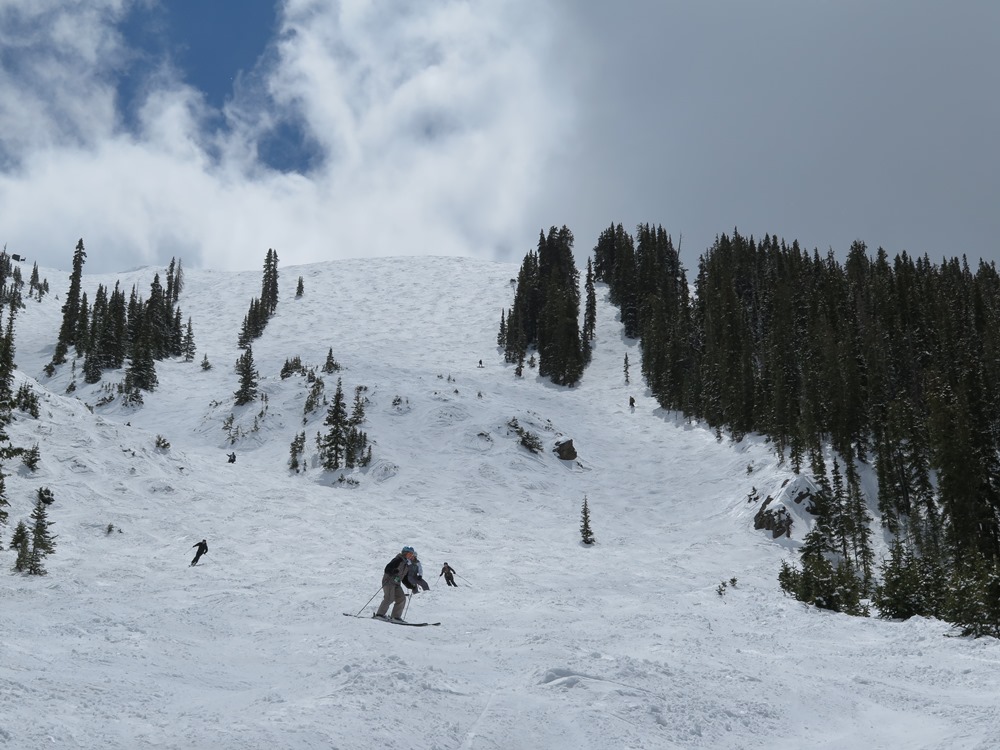 After that we needed a break so skied down Slalom Slope to a nice salmon and spinach salad lunch at Black Mountain Lodge. 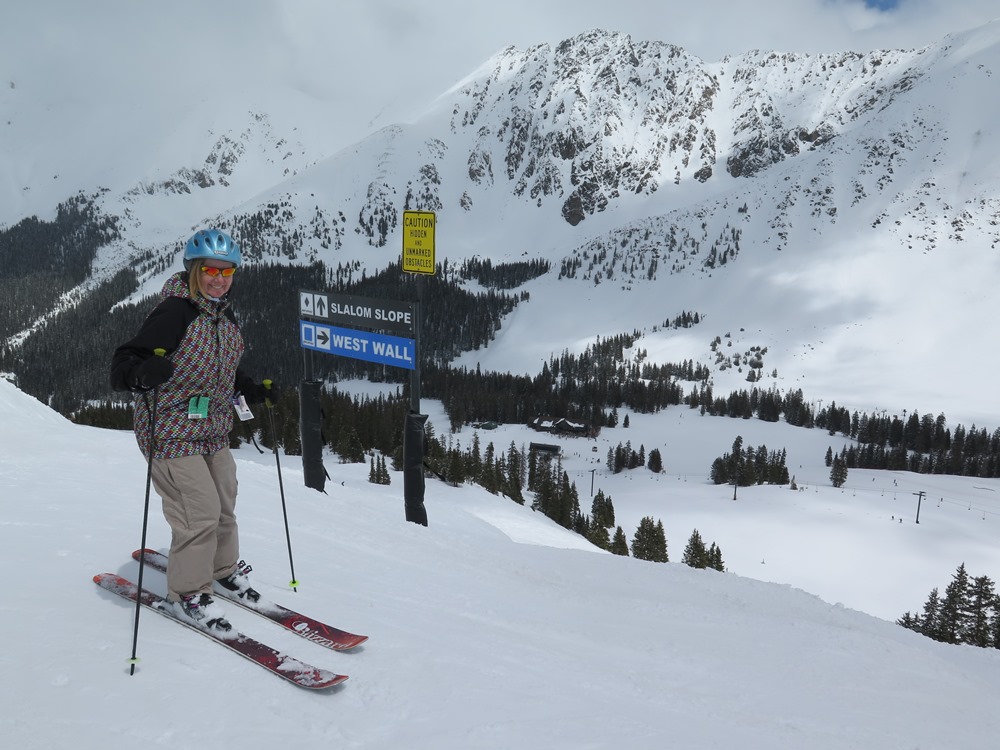 Coming out of lunch we ran into Bob Seto, with whom we rode Lenawee a couple of hours earlier. Bob is at the top of the EpicMix Leaderboard, having skied 6.5 million vertical this season, including breaking the 100K/day mark by day/night skiing at Keystone.
https://www.epicmix.com/Leaderboard.aspx 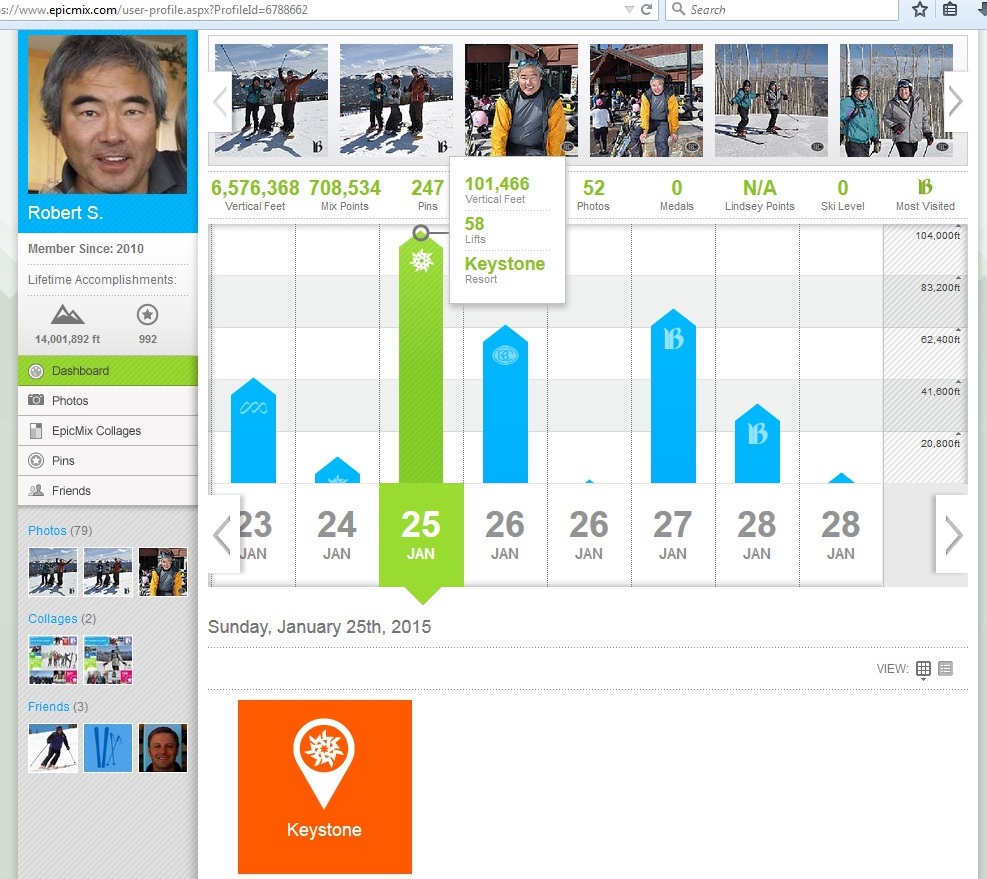 Note that the 101K day was followed by a 63K day at Beaver Creek and a 70K day at Breck. The totals above do not include A-Basin. Needless to say Bob and I had a few mutually interesting topics to discuss!

We all went over to Pali. Liz had just one run left in her, so she skied International while Bob led me via a short shot of untracked to 4th Alley. On the steep lower section local Leslie Brodhead took a picture of Bob and me. 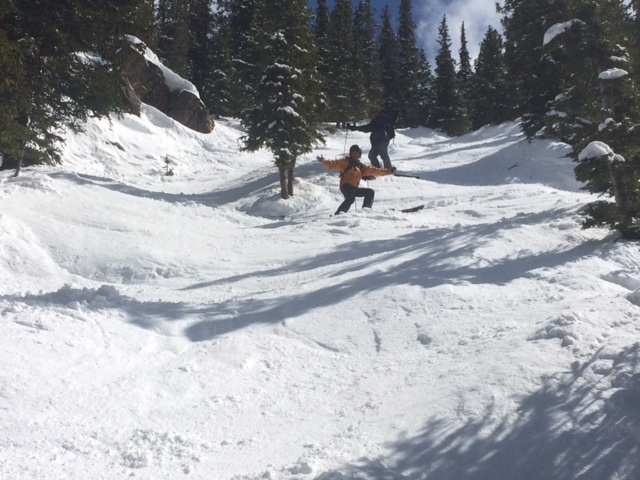 Leslie’s blog, which includes a report from Monday’s skiing: http://www.nederlandliving.com .

Bob and I then skied International. 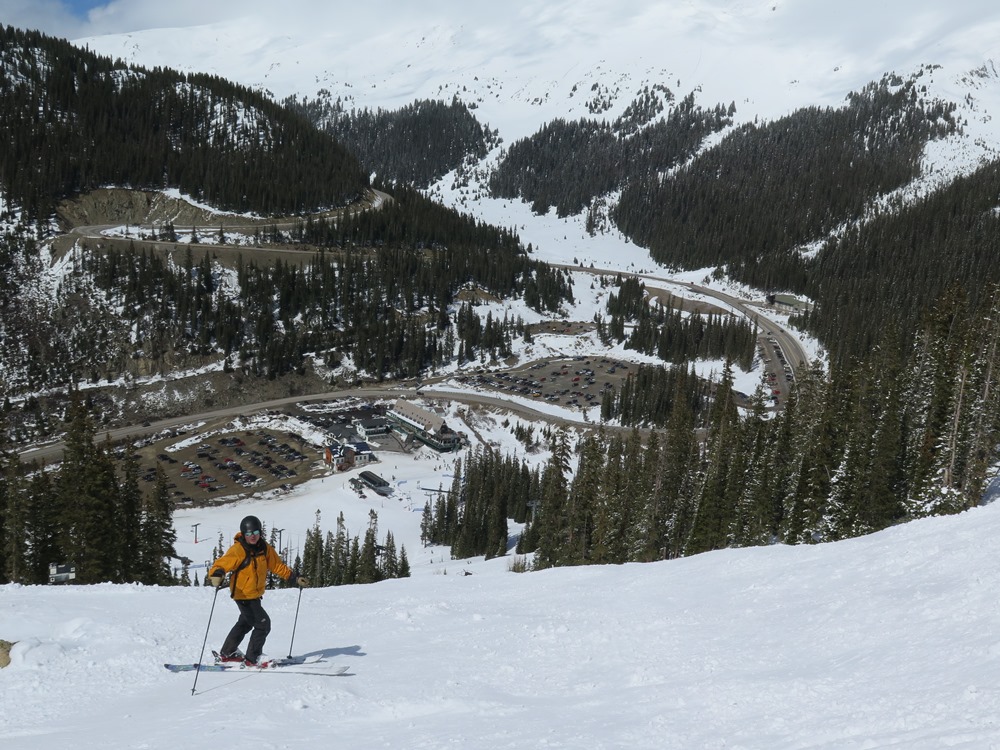 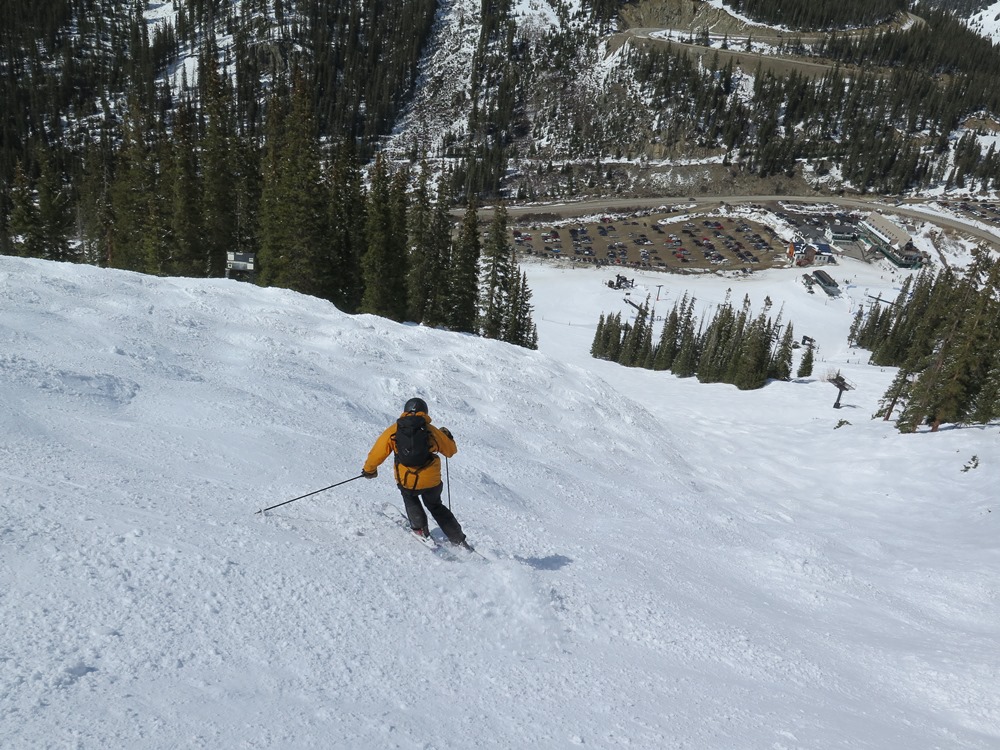 Liz and I needed to get on the road by 4PM to ensure swapping rental cars at DIA by 6PM. When we saw the OpenSnow forecasts a week ago, we thought we needed a 4WD for this weekend. Obviously a cheaper car rental is adequate for the next 10 days in Kansas, Nebraska and South Dakota.

Which is a brutal hike. Very steep pitch and at high altitude while slogging your skis up.


Tony Crocker":2vxwd4vg said:
North Pole, probably a half hour hike from the top of Lenawee.
Click to expand...

For most folks, the hike from top of Lenawee via North Pole route is 15 to 20 min. Not all that steep but starts at over 12.4K in altitude.

With the two recent storm cycles doing both removal of the very warm days and adding to snow depth, the June closing date should be a snap for them now. More interesting will be when Zuma shuts and when the rest of the steeps shut down due to threat of wet slides once we get into May.

EMSC":2qqlv2t6 said:
More interesting will be when Zuma shuts and when the rest of the steeps shut down due to threat of wet slides once we get into May.
Click to expand...

Yes, that is the point where A-Basin becomes questionable for an out-of-state visitor IMHO. But these 4 days have made our trip worthwhile from a ski perspective even if we have bad luck with the back end of the trip. And with a more normal late April base depth after these 2 storms, the odds of those areas being shut down within the next 10 days have been reduced.

EMSC":74eu1i7z said:
More interesting will be when Zuma shuts and when the rest of the steeps shut down due to threat of wet slides once we get into May.
Click to expand...

And with a more normal late April base depth after these 2 storms, the odds of those areas being shut down within the next 10 days have been reduced.
Click to expand...

That statement is patently false. Base depths have absolutely zero effect on the propensity for wet slides. Take that Avy 1 course already!

I was disappointed that we didn't revisit the foodfight from the 2014 Zermatt thread this season. Better late than never!