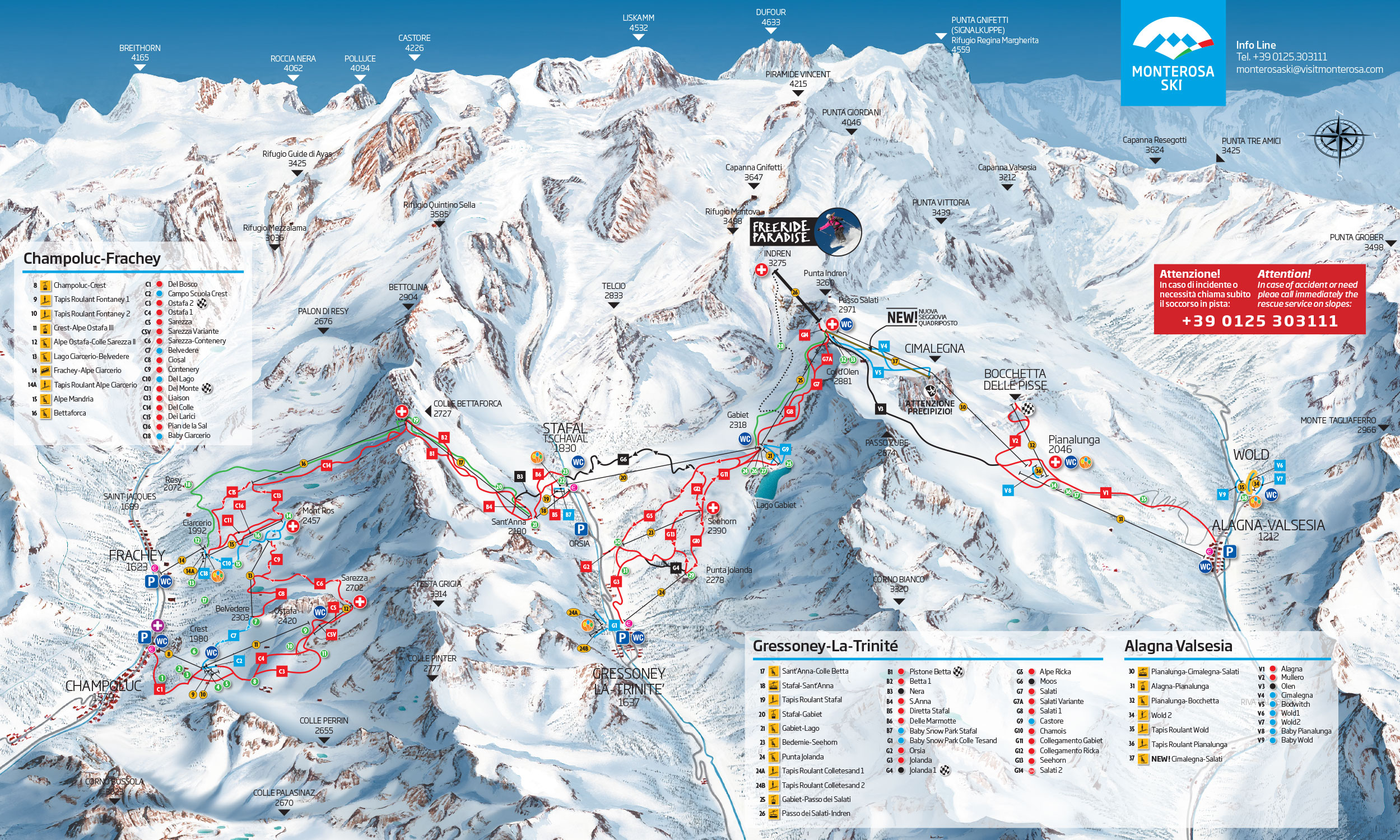 The morning was nearly as warm as the day before, so Liz and I started out with two of the runs our guide Stefan had showed us. On the traverse to the bowl above the V3 run, we can see the clouds above Alagna. 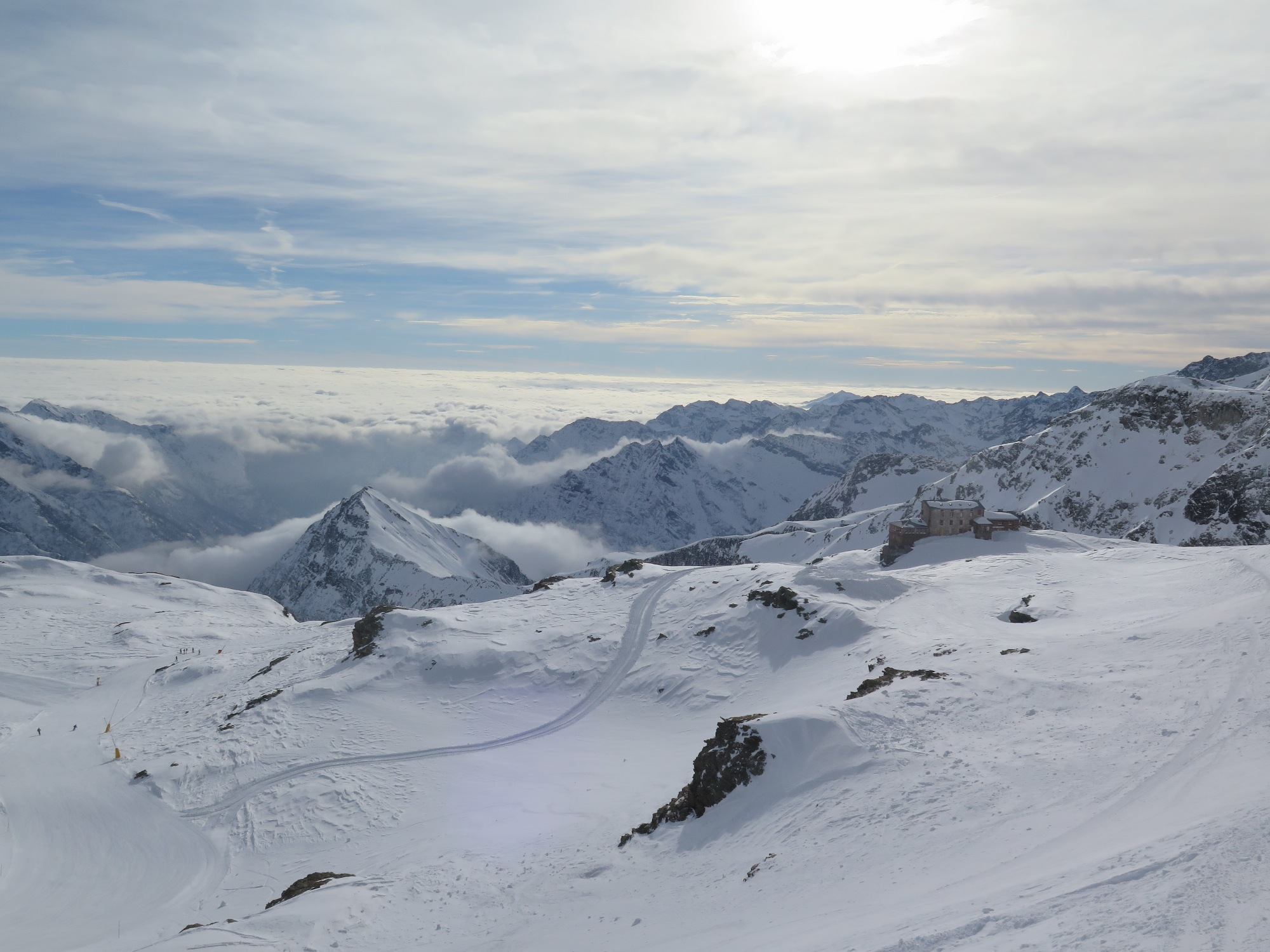 The V3 piste is in morning sun while the off piste remains shaded by mountains at left. 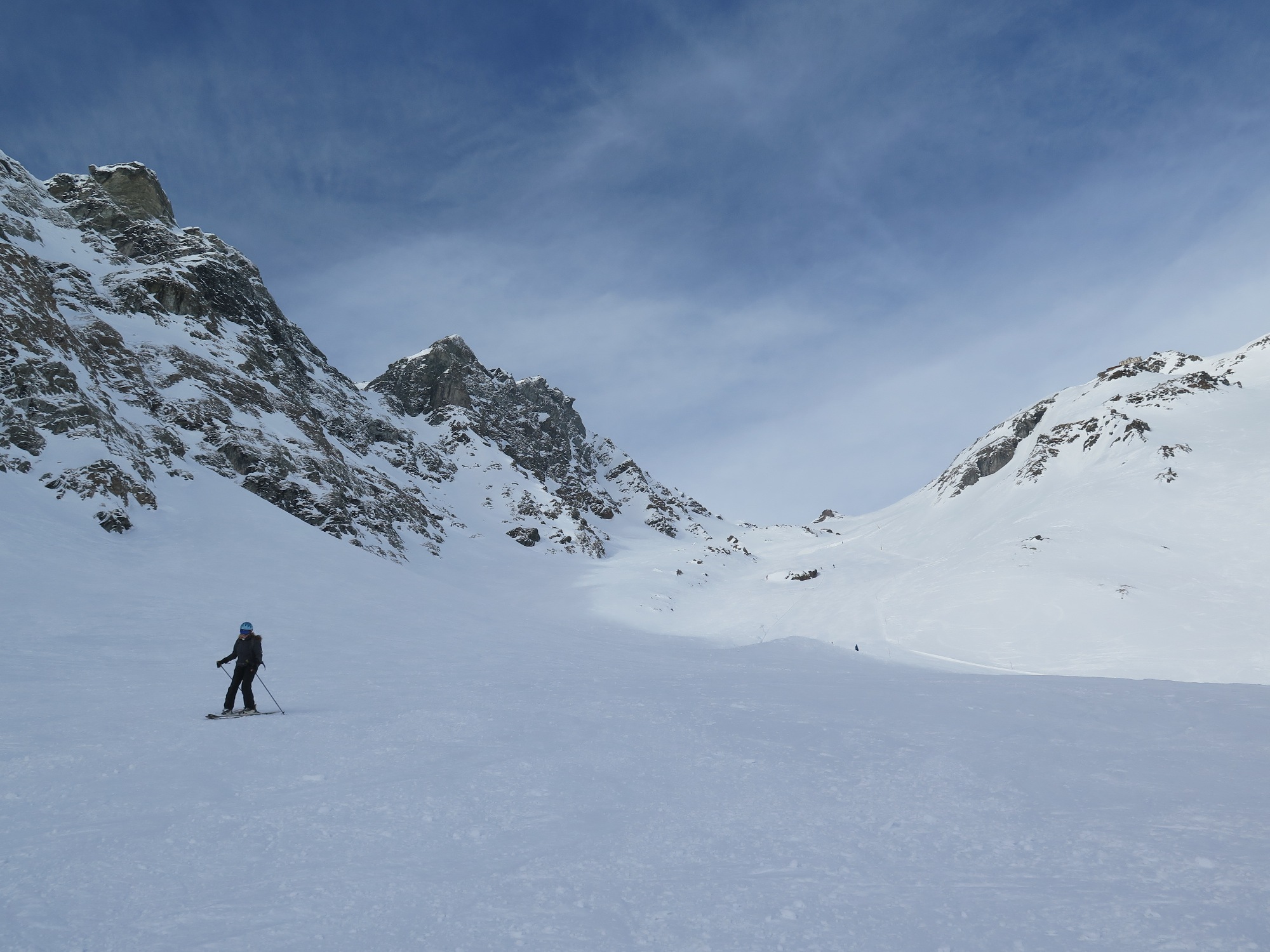 This time we bailed out to the piste at 7,200 feet, staying above the rain crust.

We rode Alagna’s upper tram and then Indren to 10,700 feet. Liz in upper bowl there: 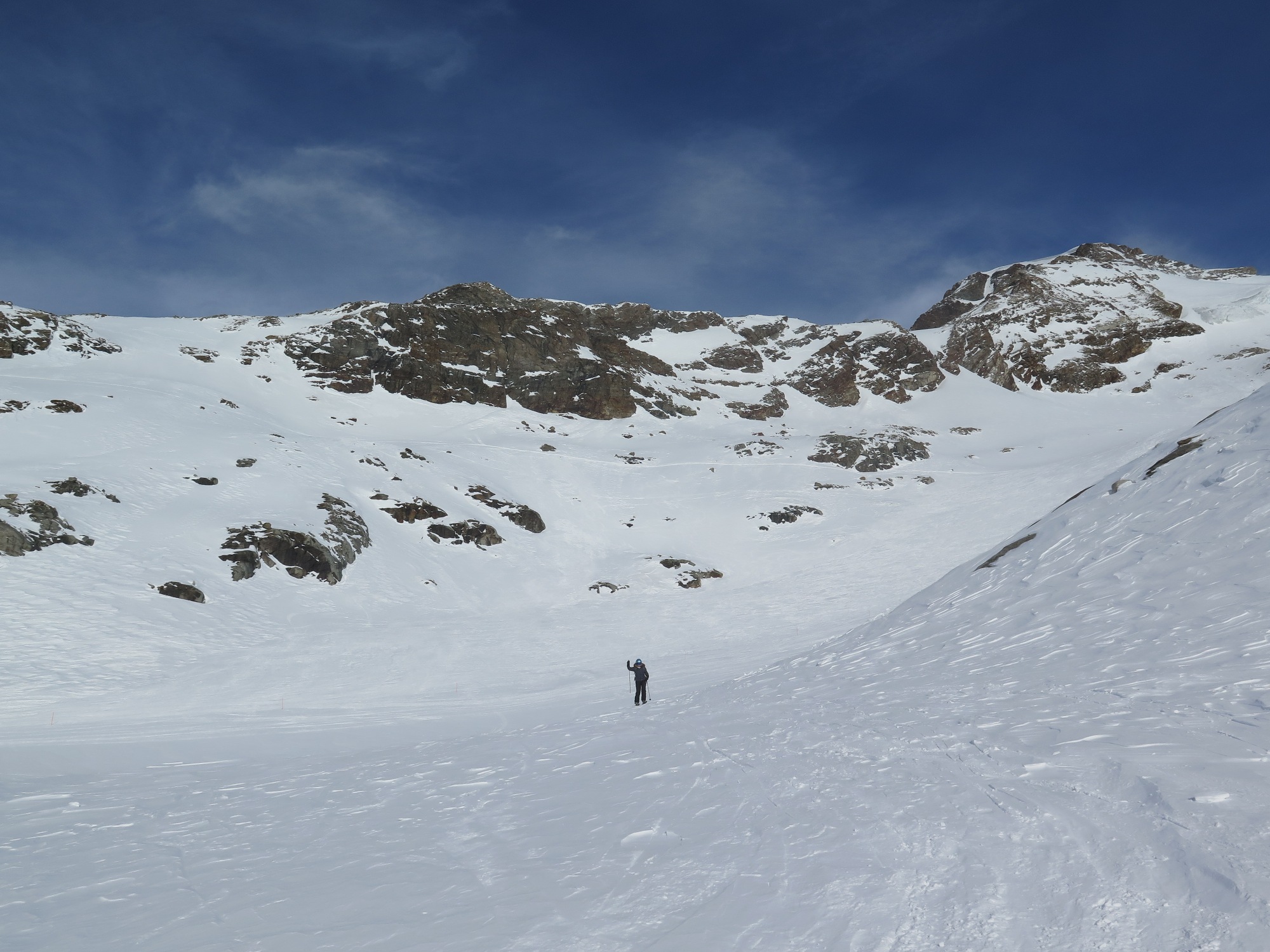 Red sticks show the way to the couloir if weather turns inclement. 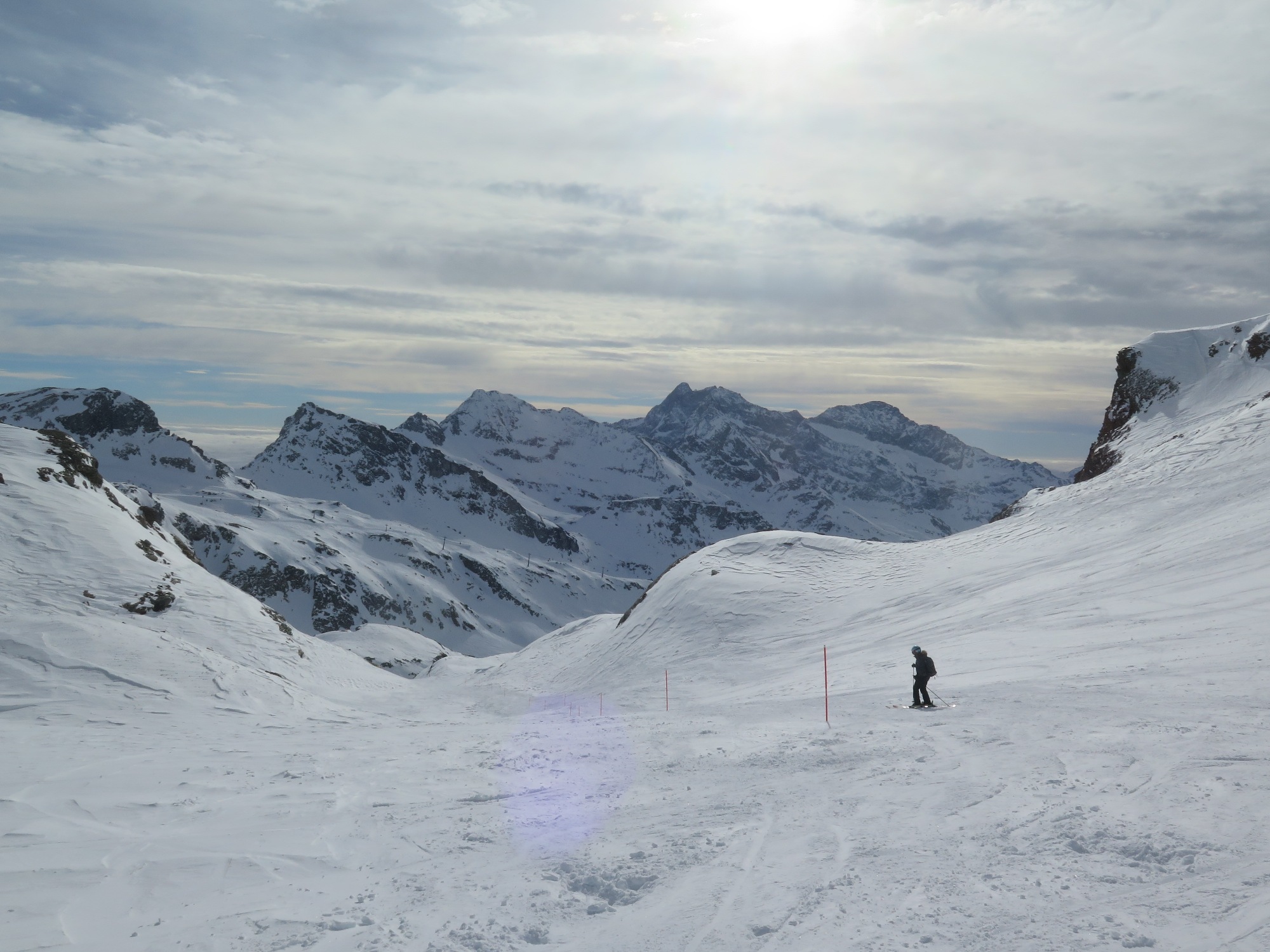 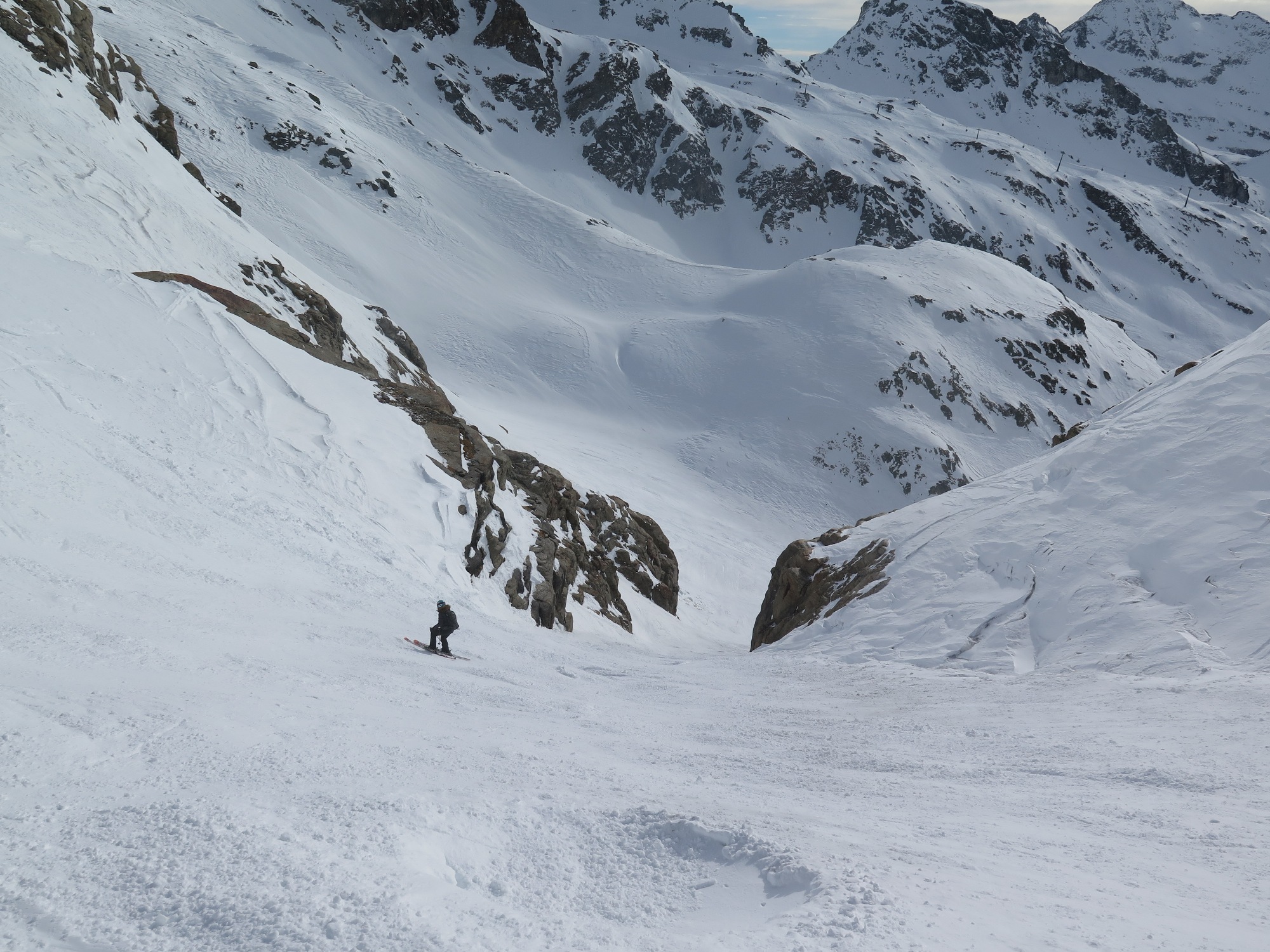 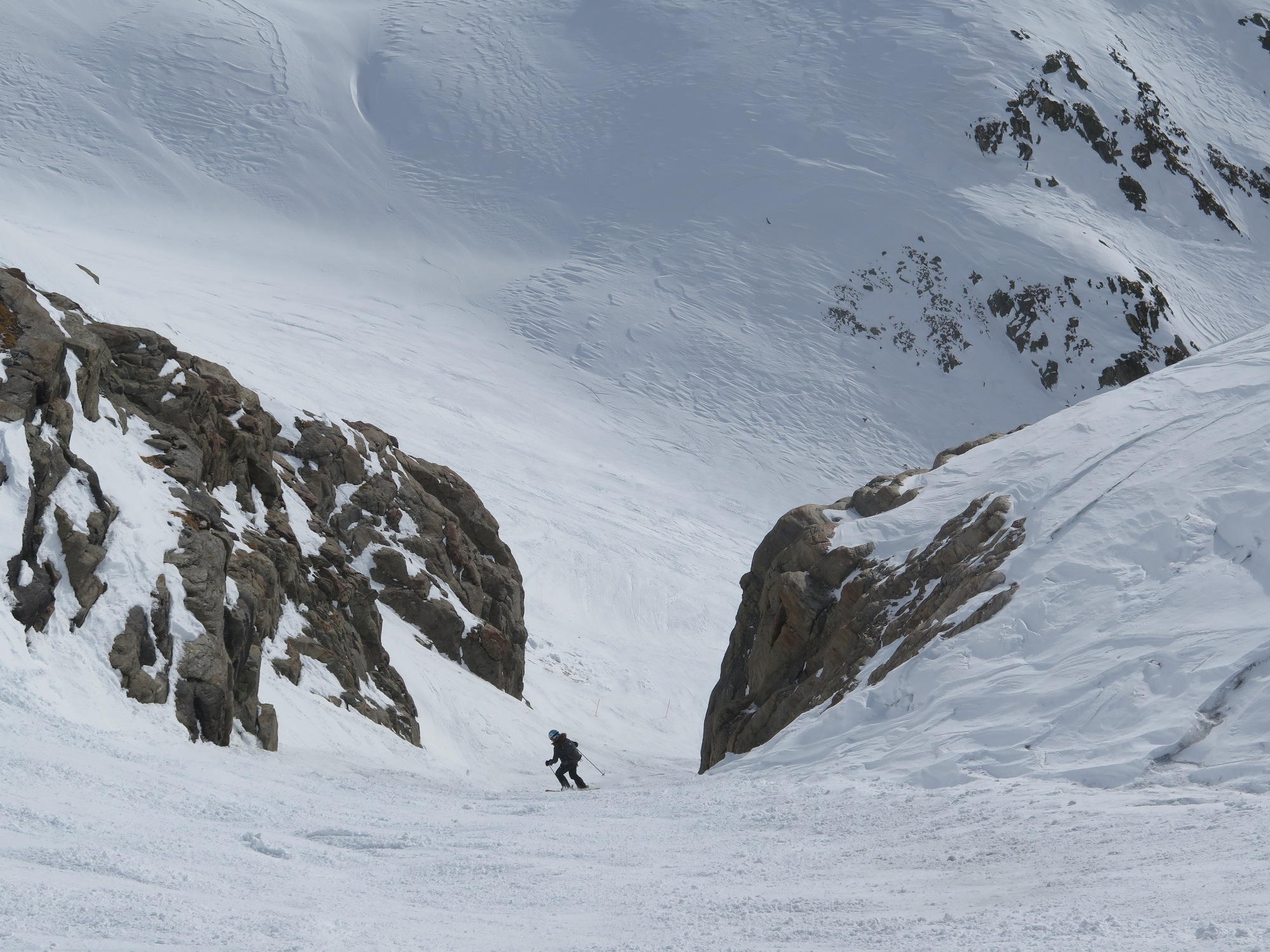 On the exit trail we saw a few people below approaching the Iscikette Couloir. 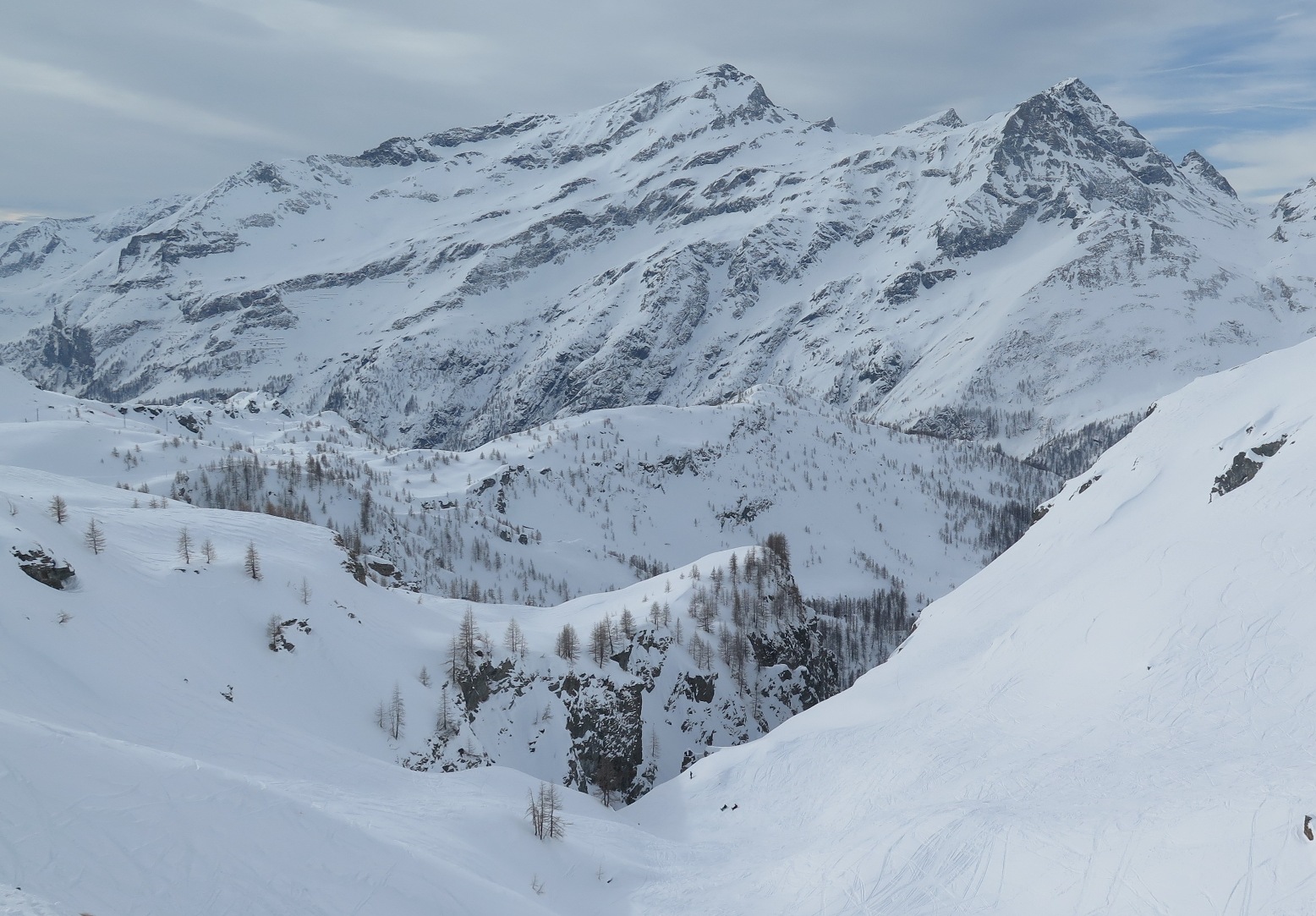 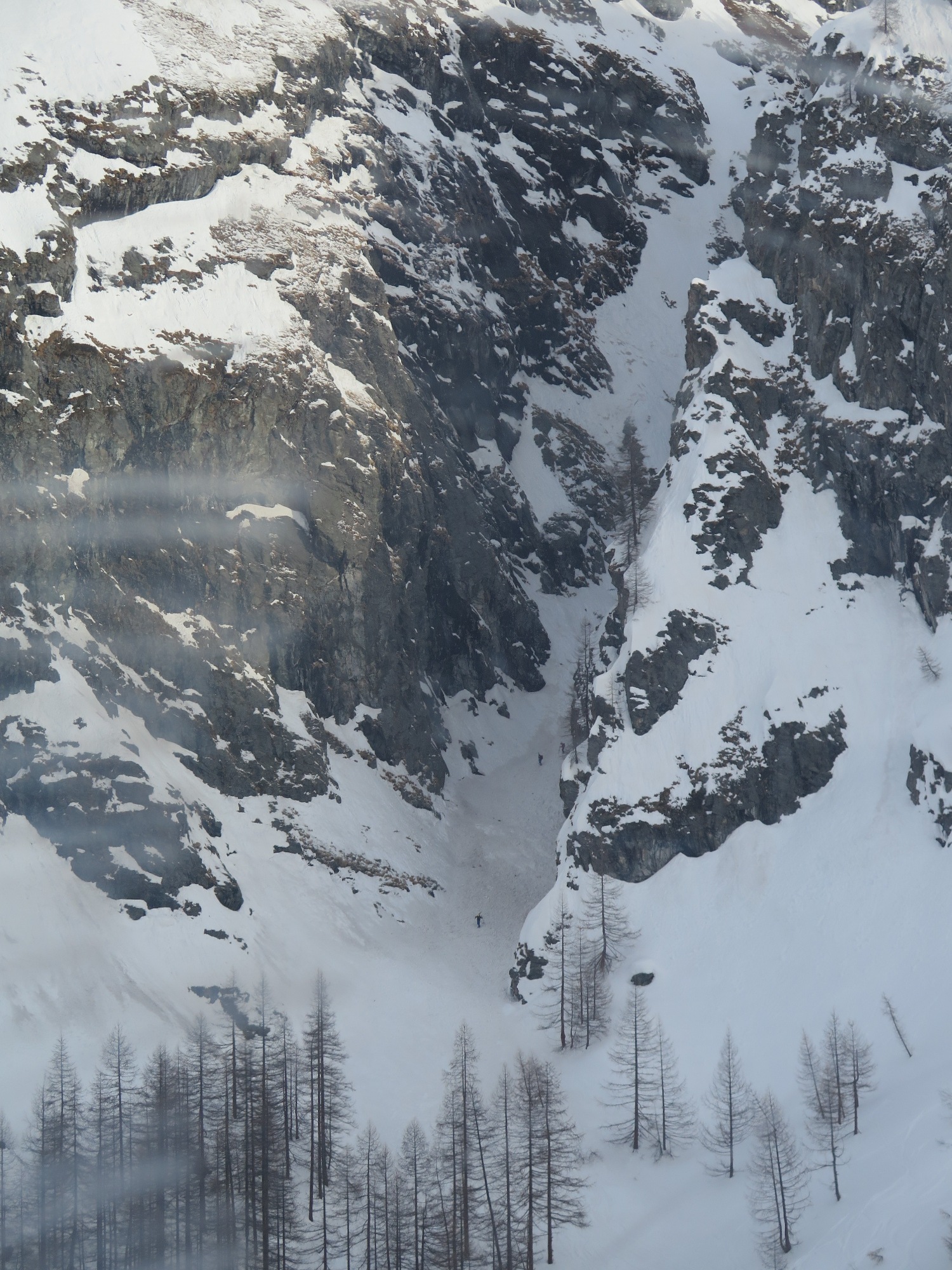 Stefan would have finished our Wednesday tour there except that avalanche debris had slid in there during the weekend wet storm. The snow was so nasty the skiers in the picture above are walking and carrying their skis.

We skied down to Grosseney, then rode two lifts to the 8,950 foot Col de Bettaforca to cross into Champoluc. The upper lift and an on mountain restaurant have a good view of the glacial ice below the 13,000+ foot peaks. 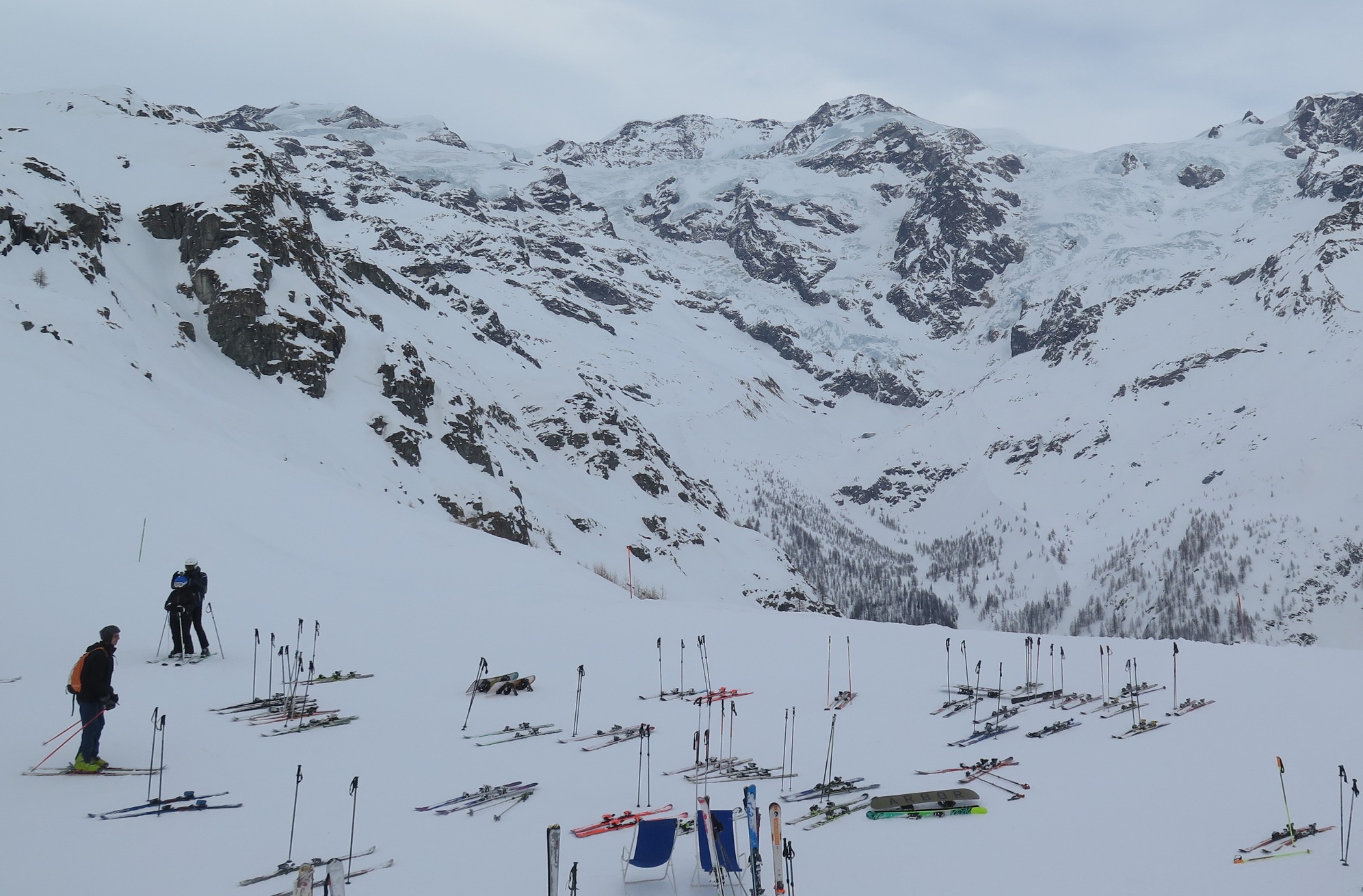 Here we descend the Champoluc side of Col de Bettaforca. 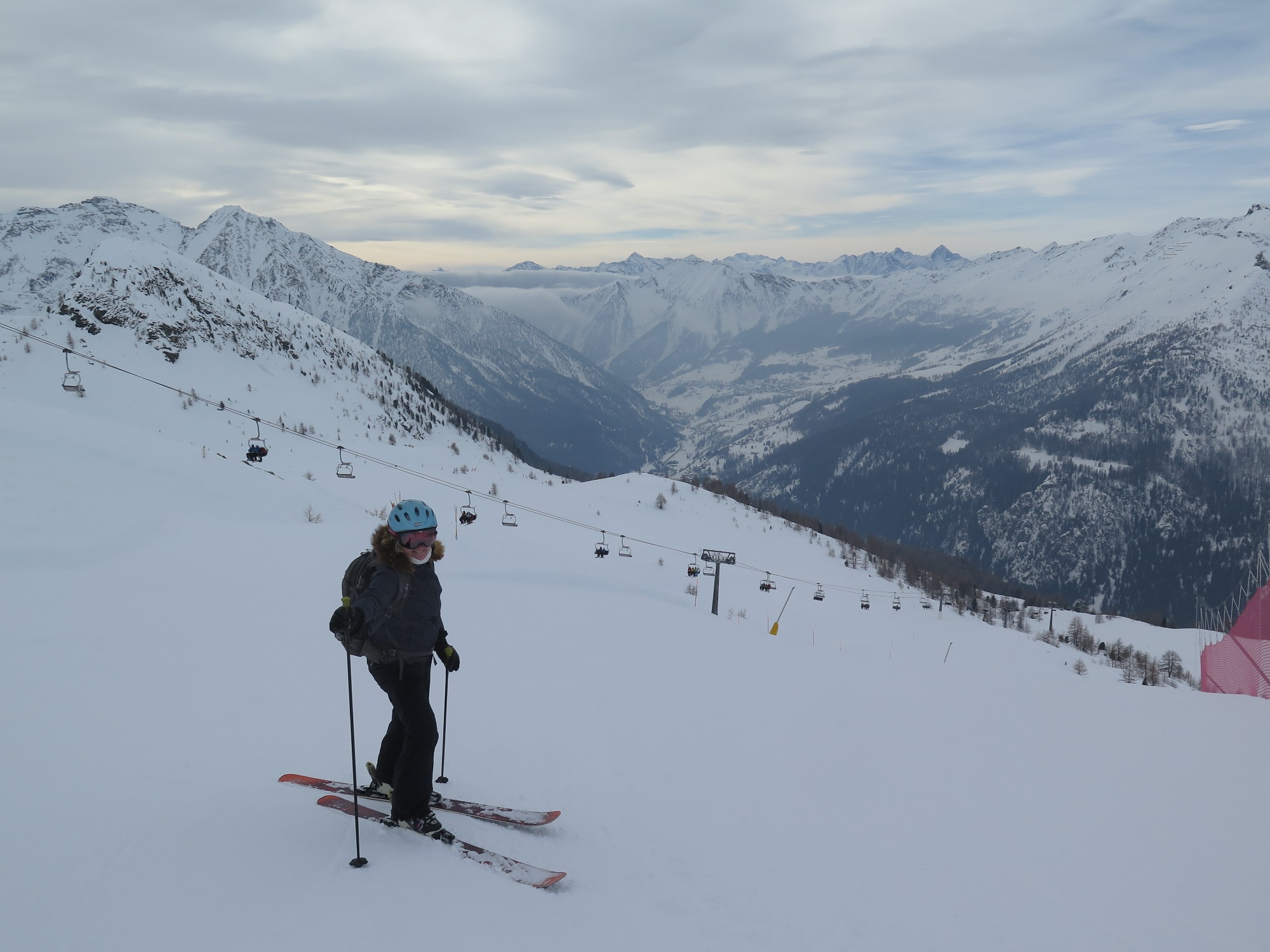 There was lightly tracked powder beside the pistes. 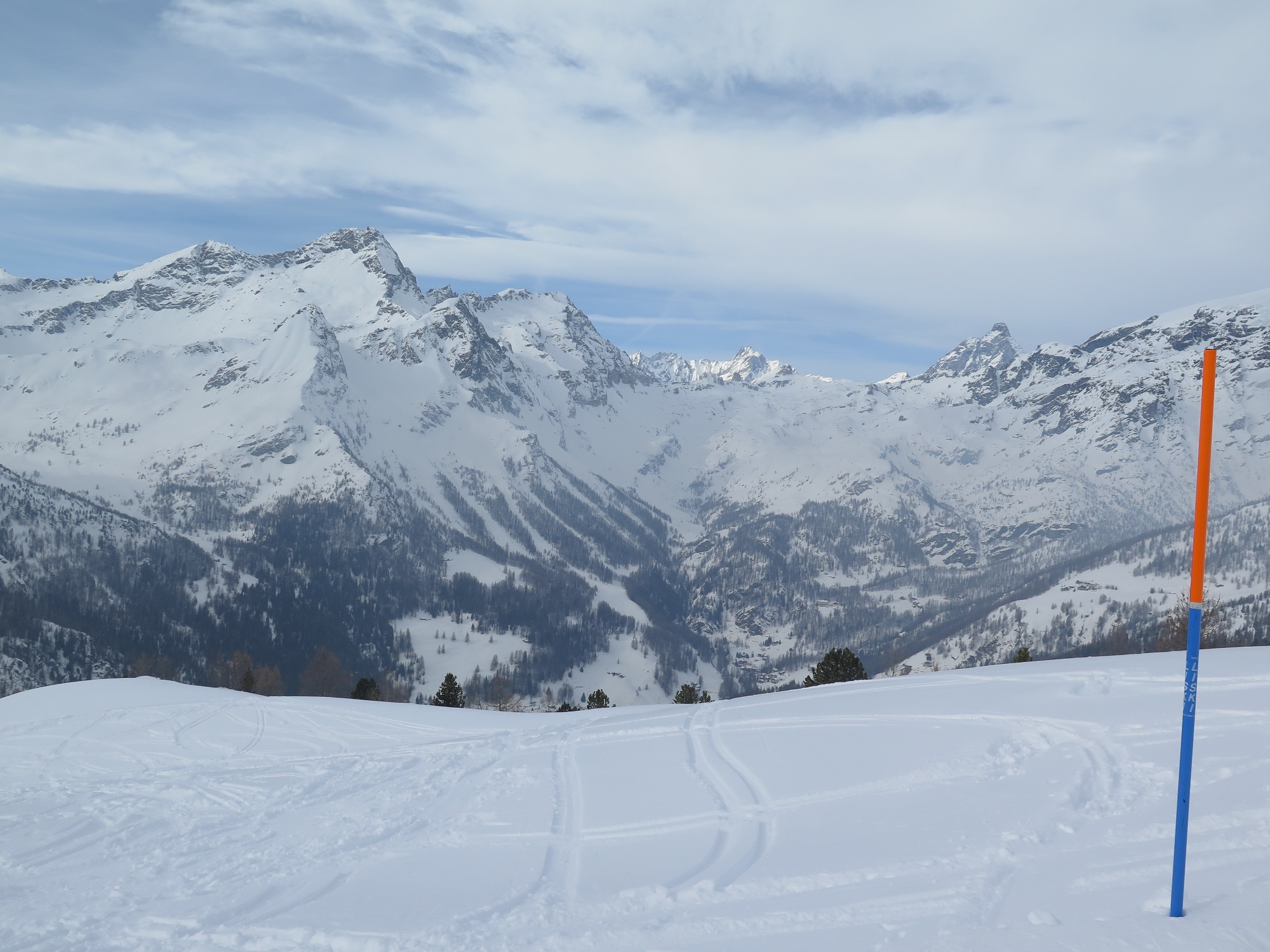 The catch was that exposure was southwest and the prior two days had been warm and sunny. Some flatter areas were soft, but once I hit a rollover and crashed when the slope became steeper and crusty.

We made our way to the 8,850 foot Serezza, the highest point directly above Champoluc, and skied a couple of runs there. The clouds are now approaching. 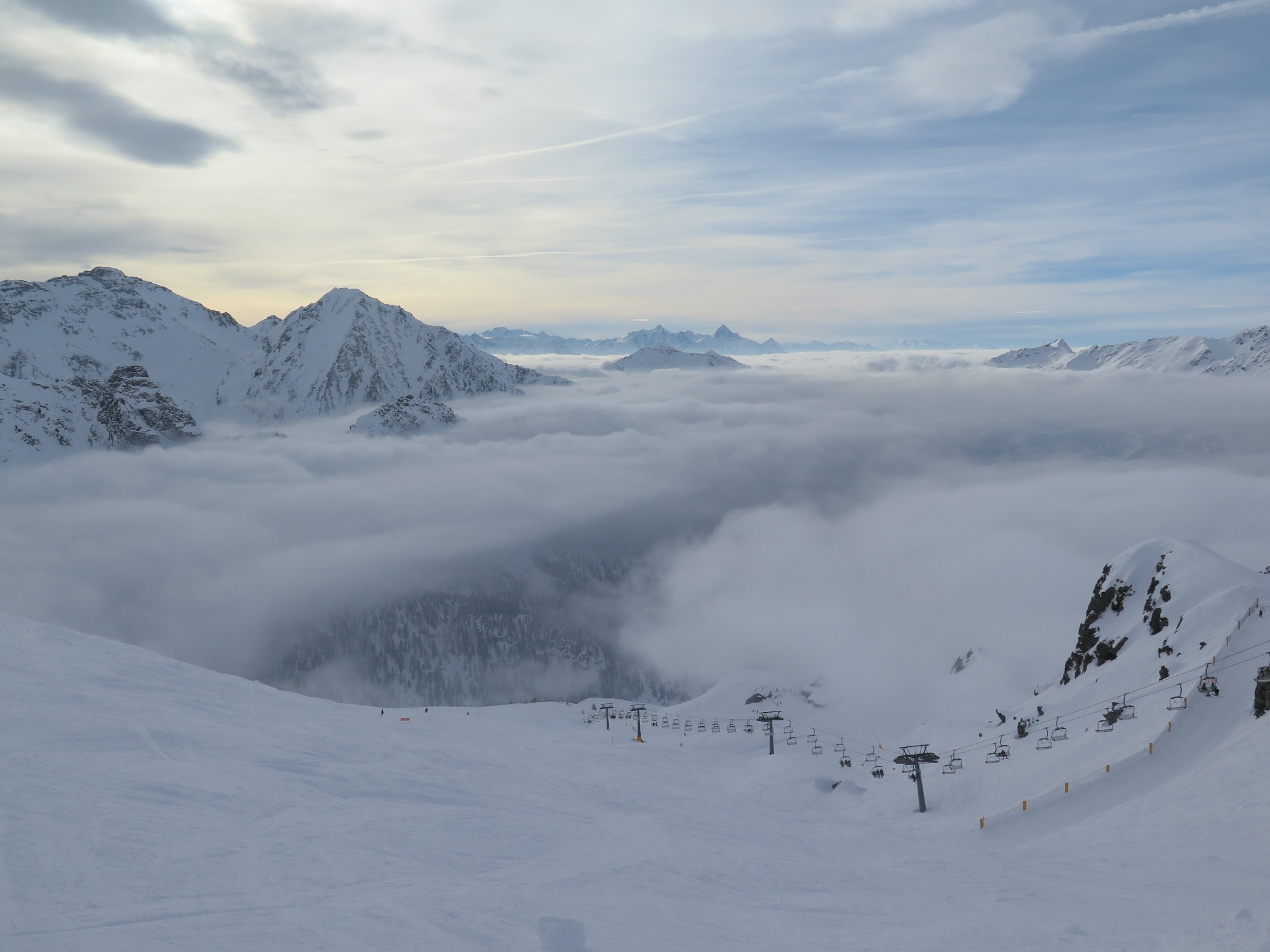 There is an ibex statue with view to the peaks and glaciers at Serezza. 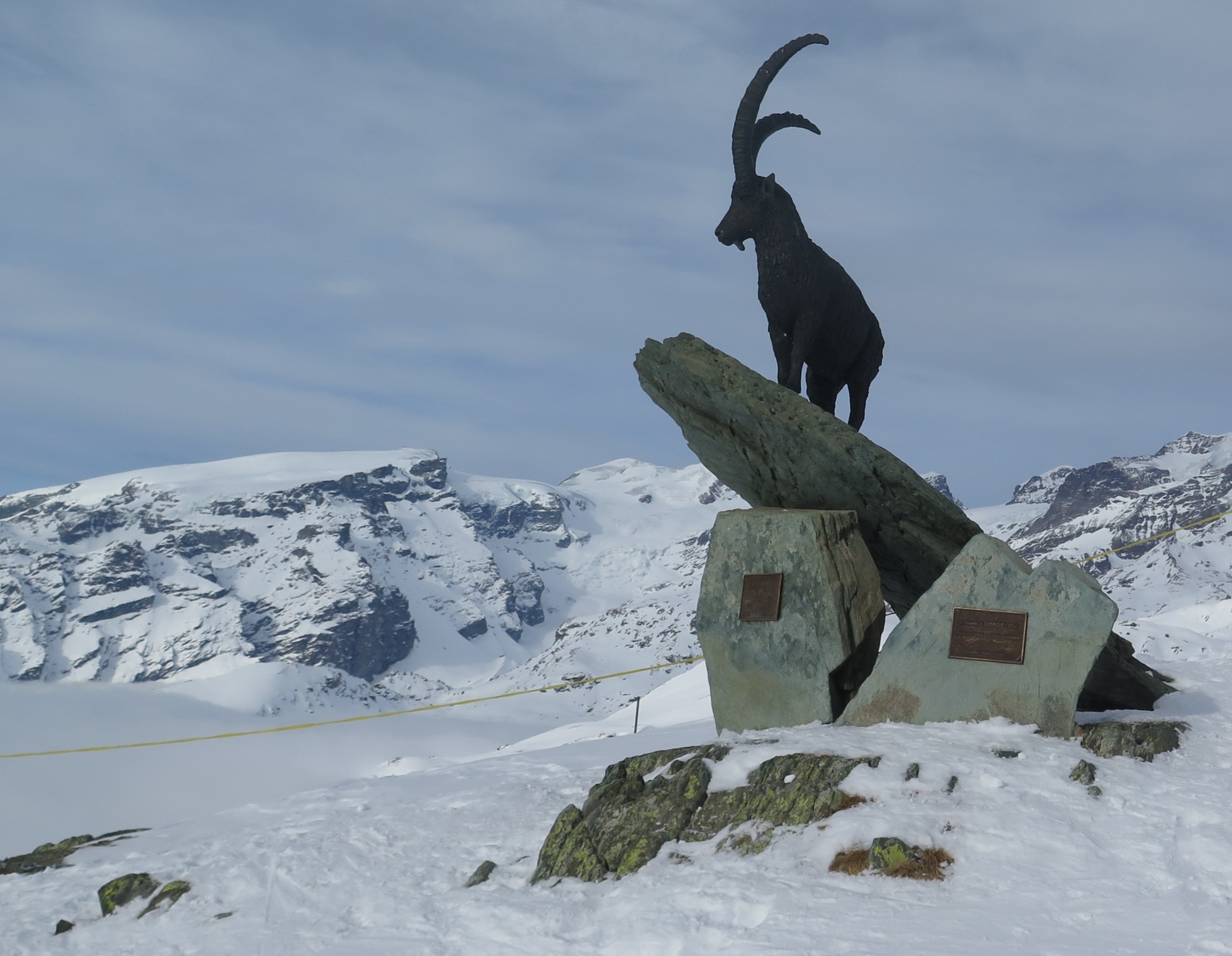 Zoom to the glaciers above the Champoluc Valley. 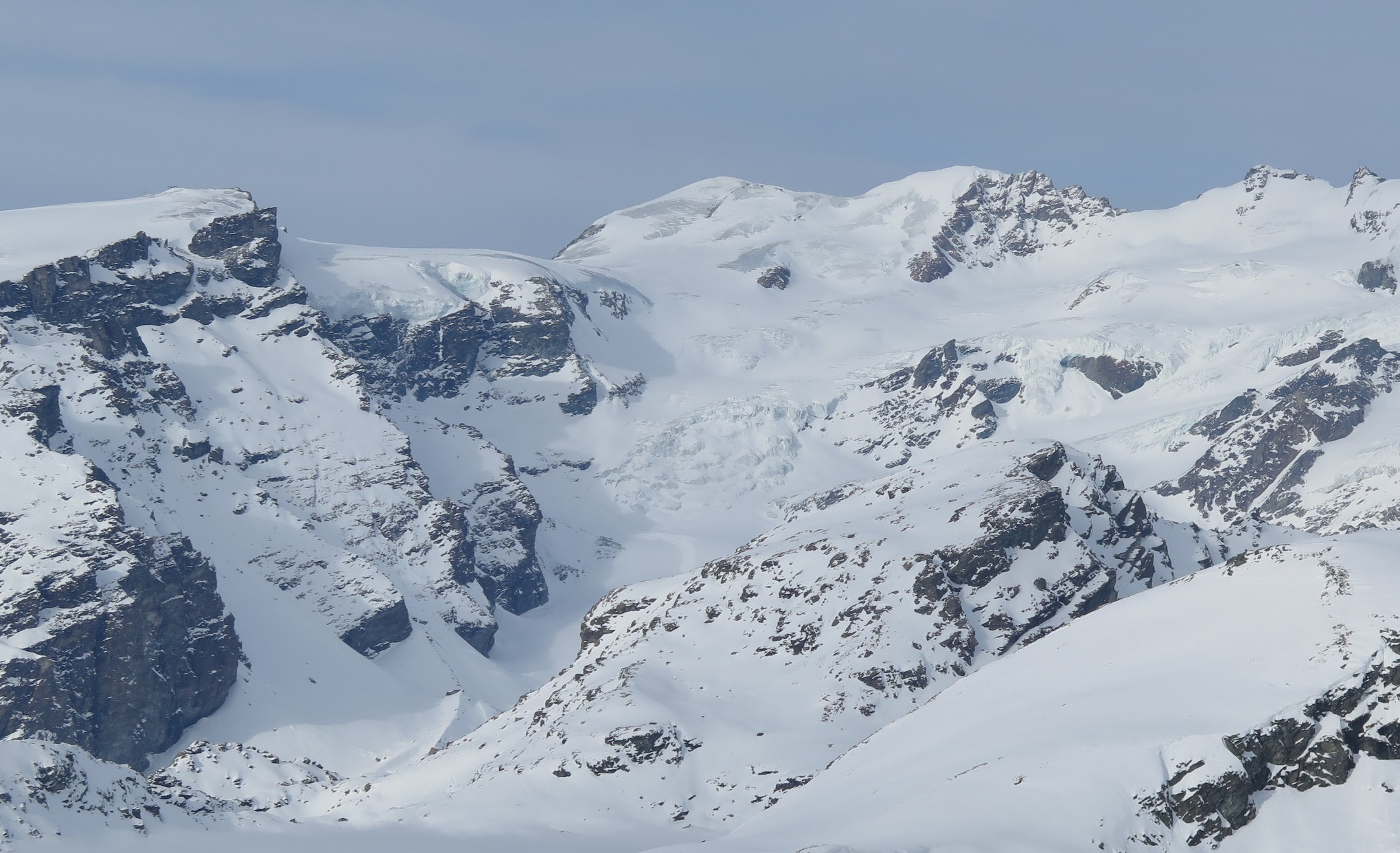 You can ski with a guide the 7,400 vertical descent from Zermatt’s Klein Matterhorn through those glaciers to Champoluc. That’s the afternoon run after a heli drop in the morning as high as 14,200 feet at Col de Lys and an 8,500 foot descent to Zermatt. I inquired and evidently the helicopter is not running at the moment. Also Zermatt is still digging out from the big storms so the sketchier glacier runs are probably off limits for awhile. 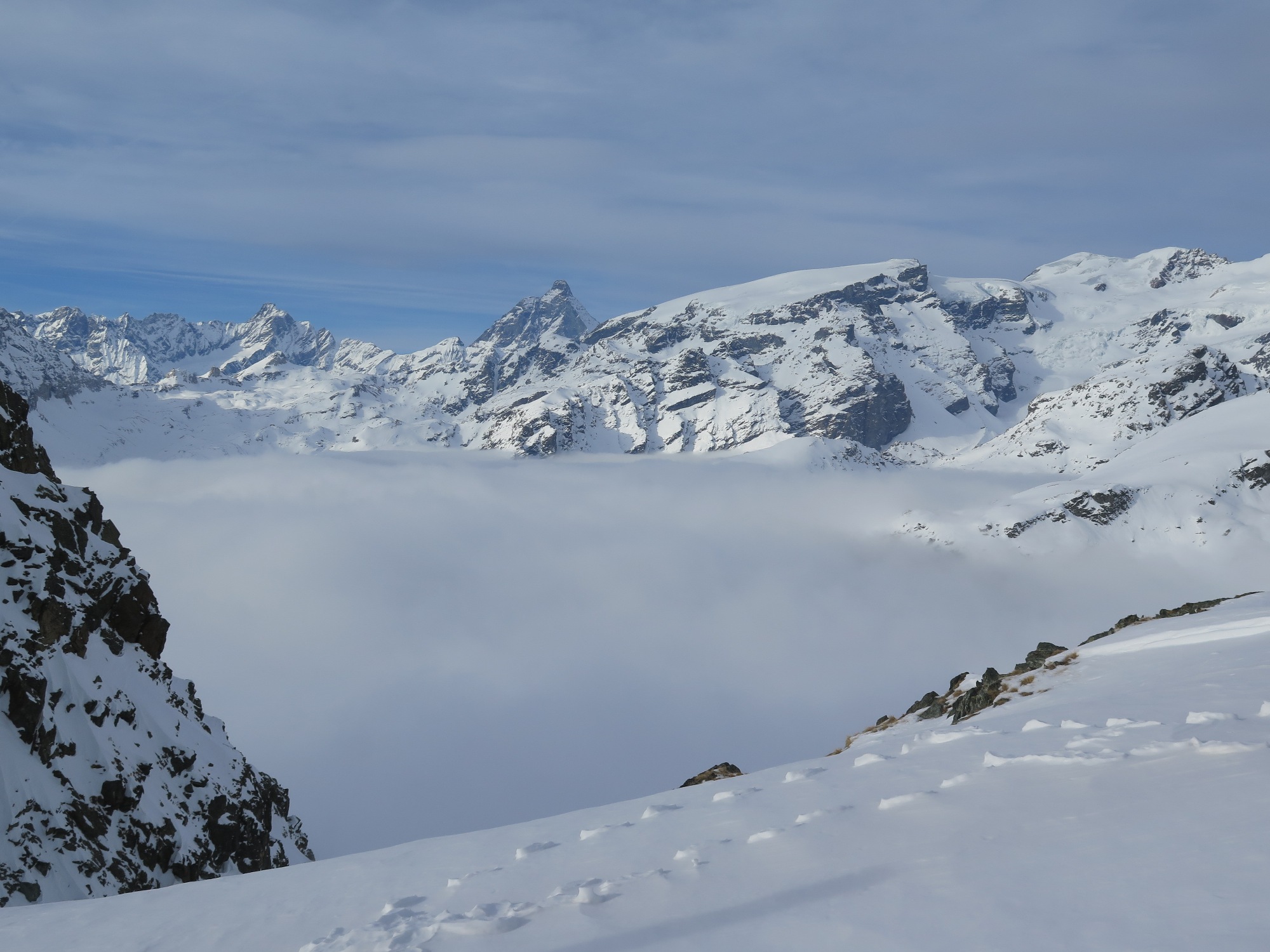 This was unfortunate because the C6 piste from Serazza is one of the few sustained north facing pitches in the Monte Rosa. From above and below the cloud band there appeared to be enticing off piste to skiers left. But off piste above tree line in the Alps is futile with bad visibility.

We made our way across 3 more lifts to Col de Bettaforca. Fortunately the cloud layer over Grosseney was much thinner so the 3,000+ foot descent to Grosseney was no problem. Liz was getting cold so she walked up a hill to get into the Ellex Hotel. I took the #20 gondola so I could ski to it. We skied 9,800 vertical on the Monterosa east of Grosseney and I skied 15,200 west of Grosseney.

Champuloc’s terrain to no surprise in the Alps skis much bigger than it looks on a map. The off piste there is more straightforwardly accessible without guides and generally at a mellower pitch than in Alagna. There are access lifts coming up from Champoluc and Frachey, but most of the pistes are in a reliable altitude range of 6,500 – 8,900 feet.

All 3 valleys have a lot of sunny exposures and might ski well timing the exposures for spring corn. With a lot of wind effect the high alpine Monterosa skiing reminded me some of Mammoth and even more of Las Lenas considering the scale and big vertical.
S

Great report Tony and great photos too.
On your trip please keep an eye out for suitable ski resorts in Europe that might suit my family of limited ability skiers. We intend on being there in January 2019.
Any details about your time in the Dolomites? It looks a stunning area - I'm sure you've got a few nice pics to post?

Given the heavy amount of south-facing terrain, when do you think the optimal time to ski Alagna/Monterosa is?

At some point, I'd like to put a trip together including a couple of days at Monterosa, La Grave (Skiers Lodge), and Alpe d'Huez. I am convinced the La Grave takes a while for snow to accumulate, so I'm opting for late season. But I am not sure what Alagna would look like?

ChrisC":3hzuybd8 said:
Given the heavy amount of south-facing terrain, when do you think the optimal time to ski Alagna/Monterosa is?
Click to expand...

Most of the terrain is east and west facing. But the point is well taken. Almost nothing is north facing in Alagna or Grosseney and just a modest amount in Champuloc.

Above timberline in the Alps has great corn snow potential. But you need a cooperative sequence of weather, which as for powder can't be planned far ahead. In April 2018 I expected corn in France and powder in Iceland and got the opposite. Guides are probably a good idea for off piste corn in the Alps because you not only need to be in the right place but be there at the right time of day. Hopefully we will find out due to the timing of our 2022 trip.

I would block out the time you want at La Grave and leave the rest flexible for conditions. There are a tremendous number of ski options within the 4 hour radius it would take to drive to the Monterosa from La Grave.

Tony Crocker said:
Zoom to the glaciers above the Champoluc Valley.
View attachment 24776 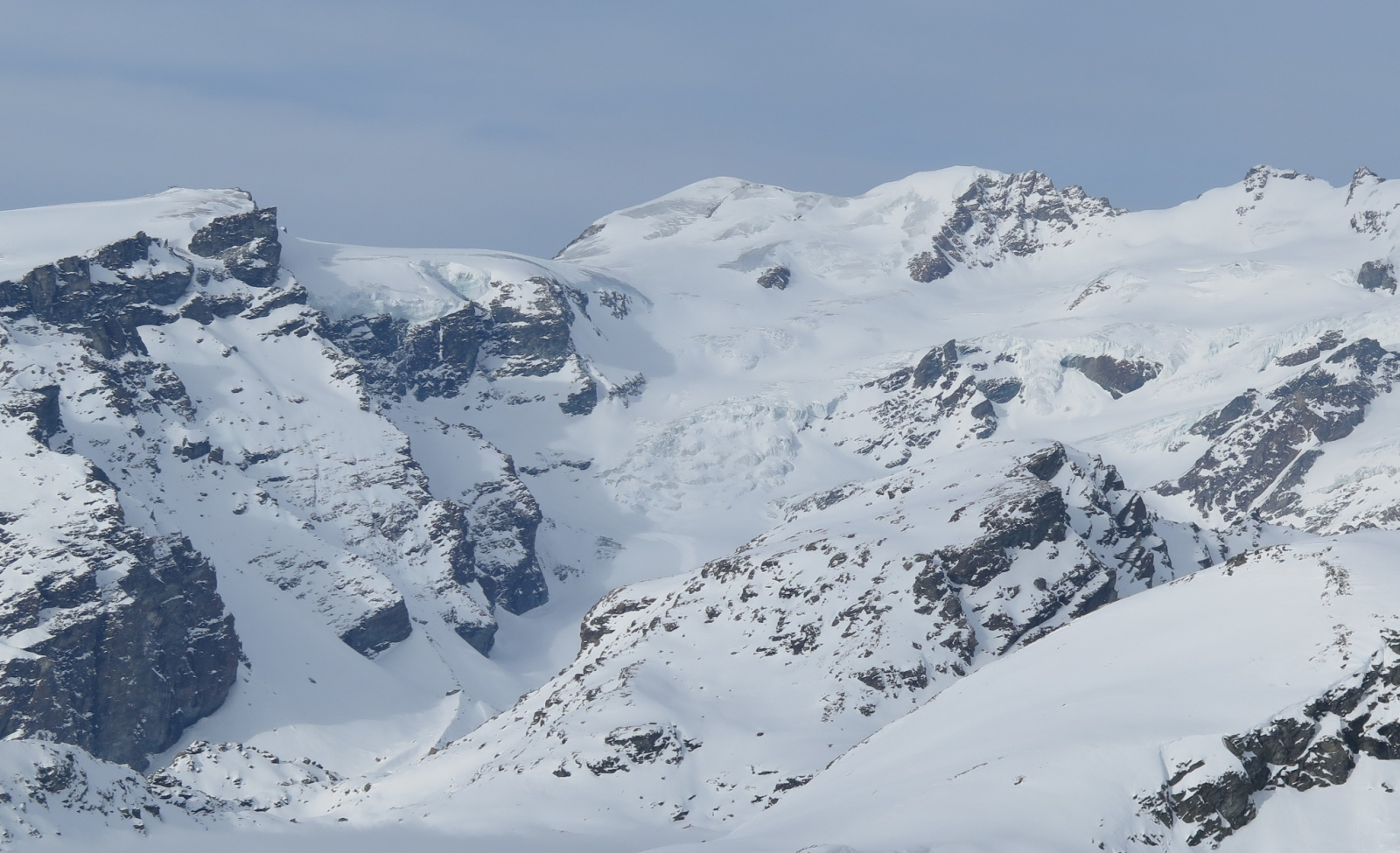 You can ski with a guide the 7,400 vertical descent from Zermatt’s Klein Matterhorn through those glaciers to Champoluc. That’s the afternoon run after a heli drop in the morning as high as 14,200 feet at Col de Lys and an 8,500 foot descent to Zermatt. I inquired and evidently the helicopter is not running at the moment. Also Zermatt is still digging out from the big storms so the sketchier glacier runs are probably off limits for awhile.
Click to expand...

Do you think the heli-drop to ski Zermatt's Schwarztor, and the return to Champoluc would be worthwhile? Of course, assuming clear weather and a decent snowpack.

Your experience back in February 2014 looks really interesting. Here. It's one of the reasons you ski the Alps.
Last edited: Jul 5, 2022