Staff member
A-Basin opened May 29, with tickets reservable two evenings before, similar to Mt. Bachelor. But they also sold 30 $99 day tickets per day, and the other 570 tickets for passholders included Ikon, so demand was far beyond Baldy, Timberline or Bachelor. A-Basin’s system crashed immediately at 7PM May 27, so they shifted to a lottery system.

I’m visiting Paul Kulas in Eagle Colorado on my way across the country, arriving Saturday and entering the lottery unsuccessfully for Sunday-Tuesday. Paul is an A-Basin passholder and for Sunday and later days, those passholders have a separate lottery from Ikon and other passes (advance 4-day, reciprocal arrangements with Taos and a few other areas). So Paul won the lottery for Monday, and since each lottery win can be for 2 tickets I got to ski too.

We arrived at A-Basin about 8:45AM. Paul showed the reservation to get into parking. View of Pali chair, which is now closed: 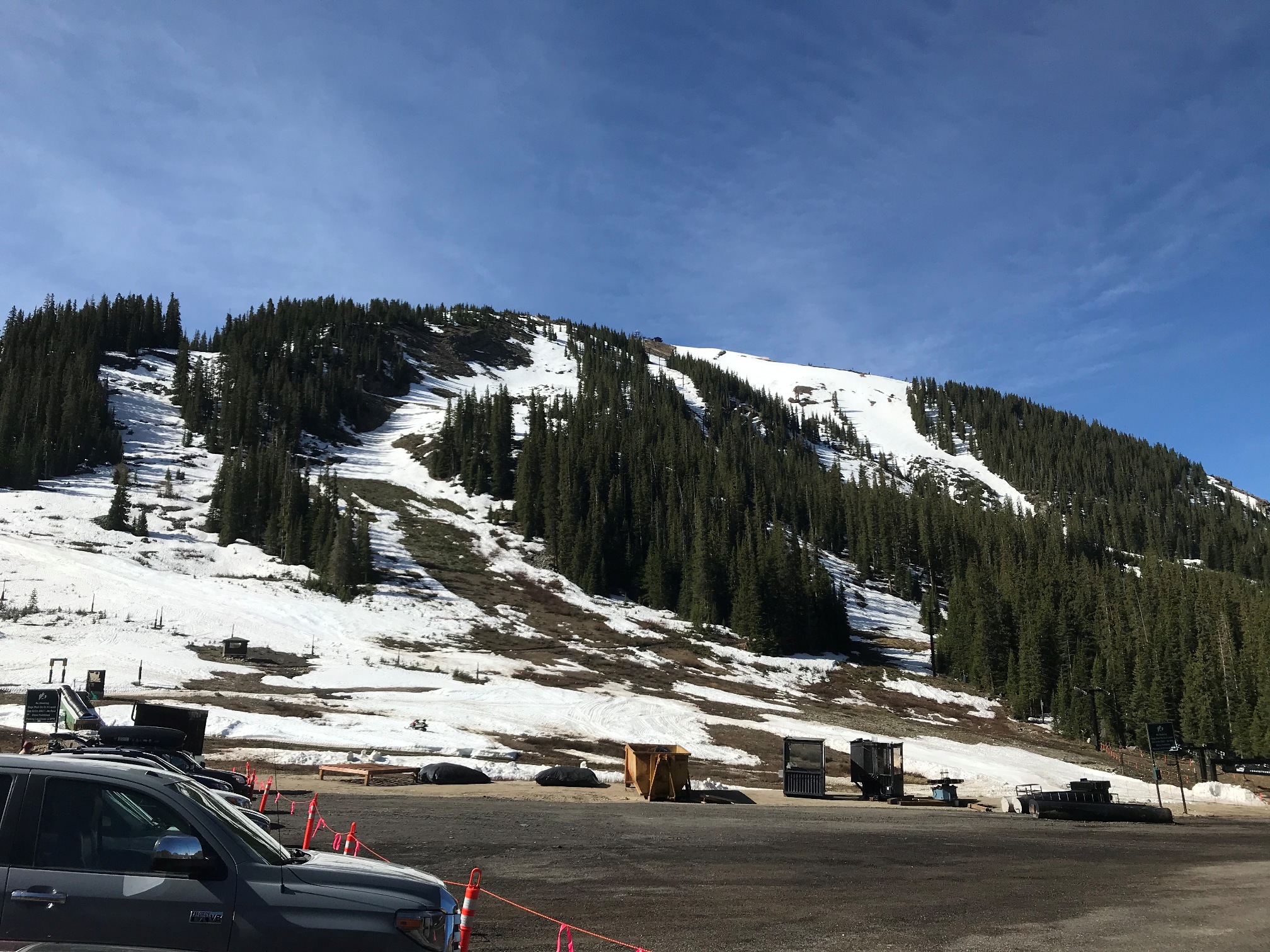 Pail’s terrain was never open due to the usual wet snow instability after mid-May, but the lift was open for the first few days of the reopening with skiing off the back to West Wall.

Between the base lodge and the snow was a checkpoint where we showed the reservation again and had our passes (A-Basin for Paul, Ikon for me) scanned. 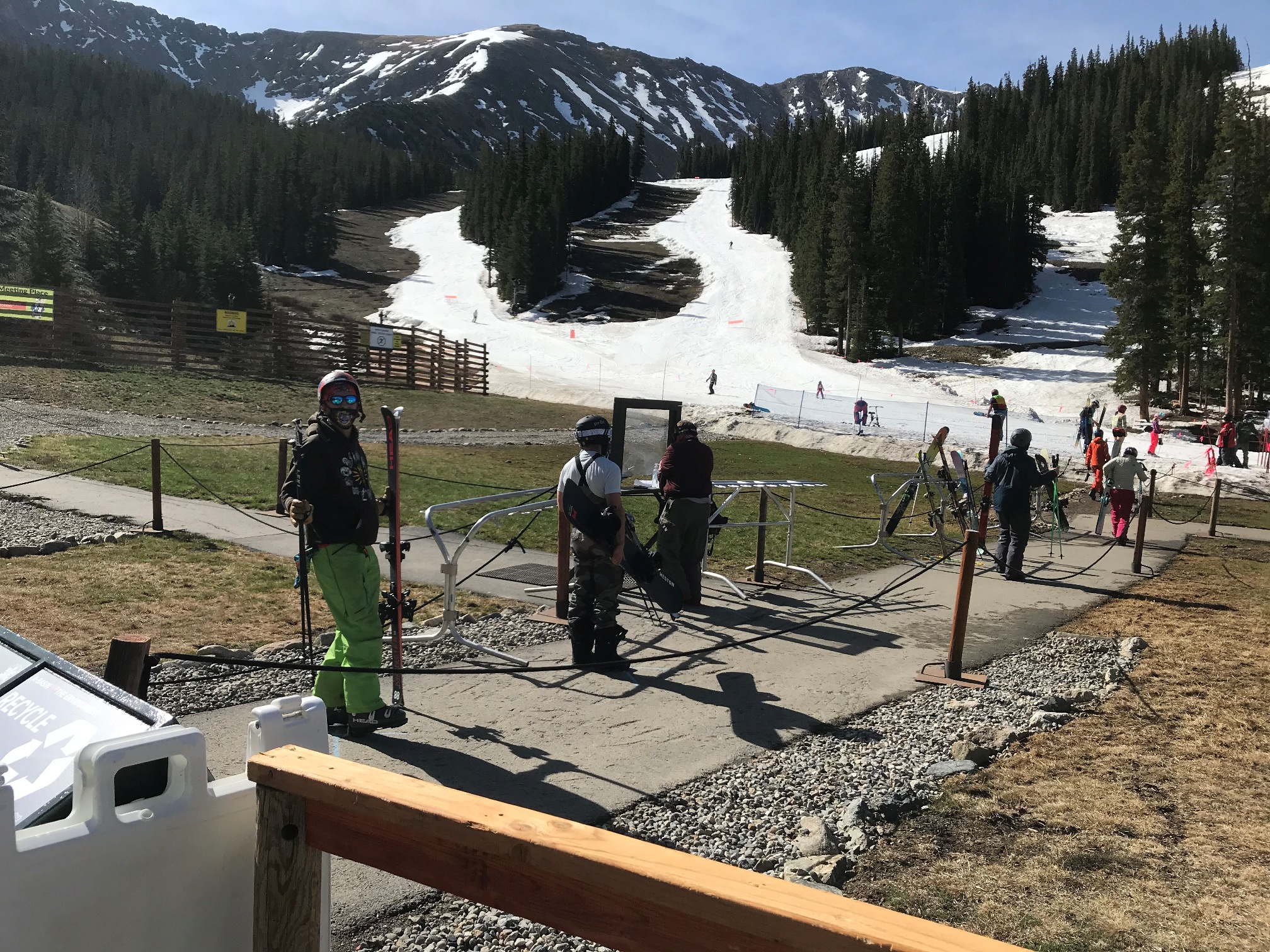 In the backgound are the two lower runs Sundance and High Noon.

Snow was soft immediately due to low temps of 42F. Our first run was top to bottom on Dercum’s Gulch and High Noon and I thought the snow was a little too good for 9:30AM, meaning that it might not hold up that well for several hours.

When riding the Lenawee lift these runs from Dragon to Jamie’s Face looked interesting, but they were roped off due thin coverage at their entries. 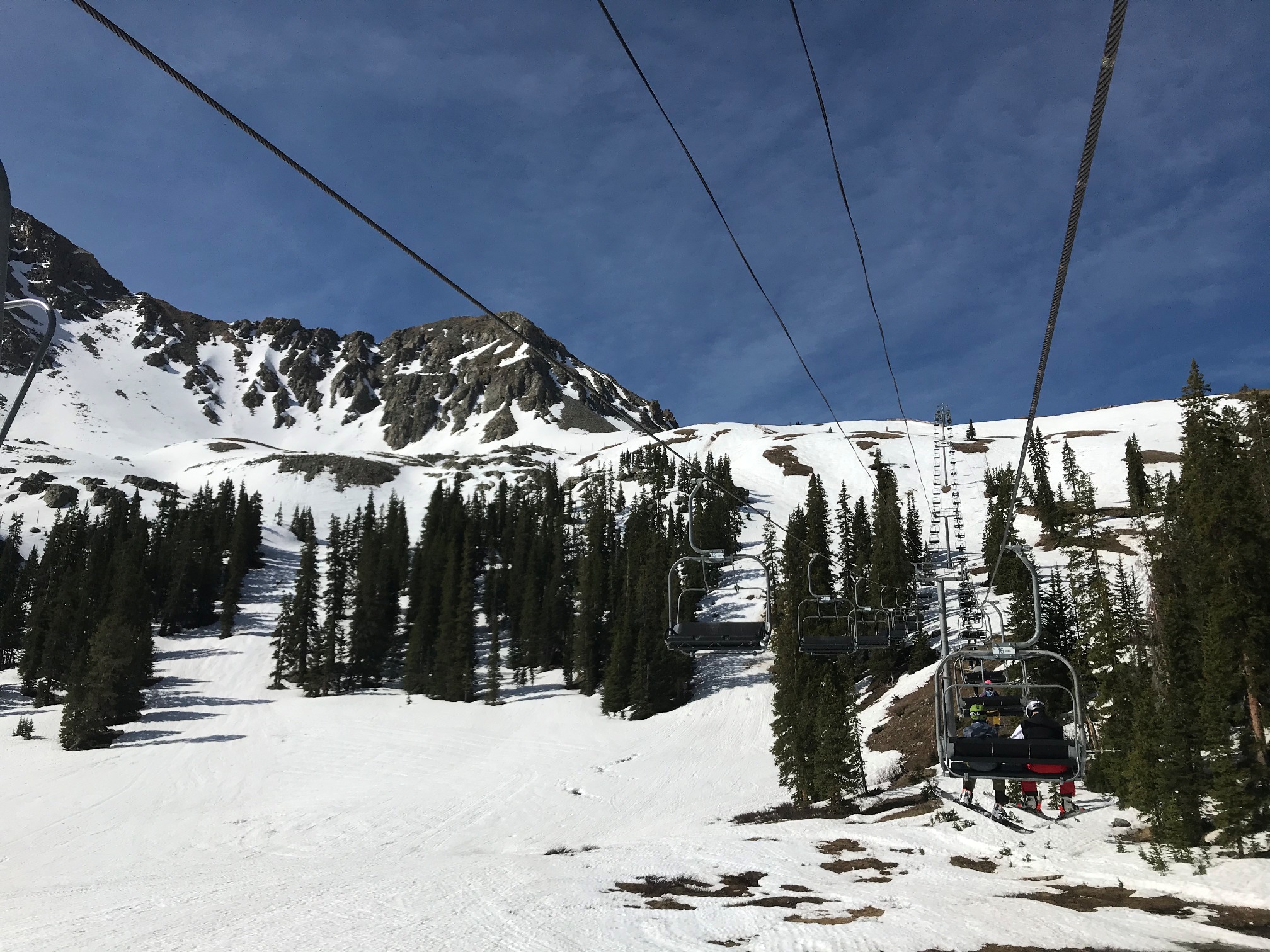 I skied much sketchier lines than this at Baldy a month ago.

The upper part of Lenawee was open to explore varied lines from Humbug through Norway. 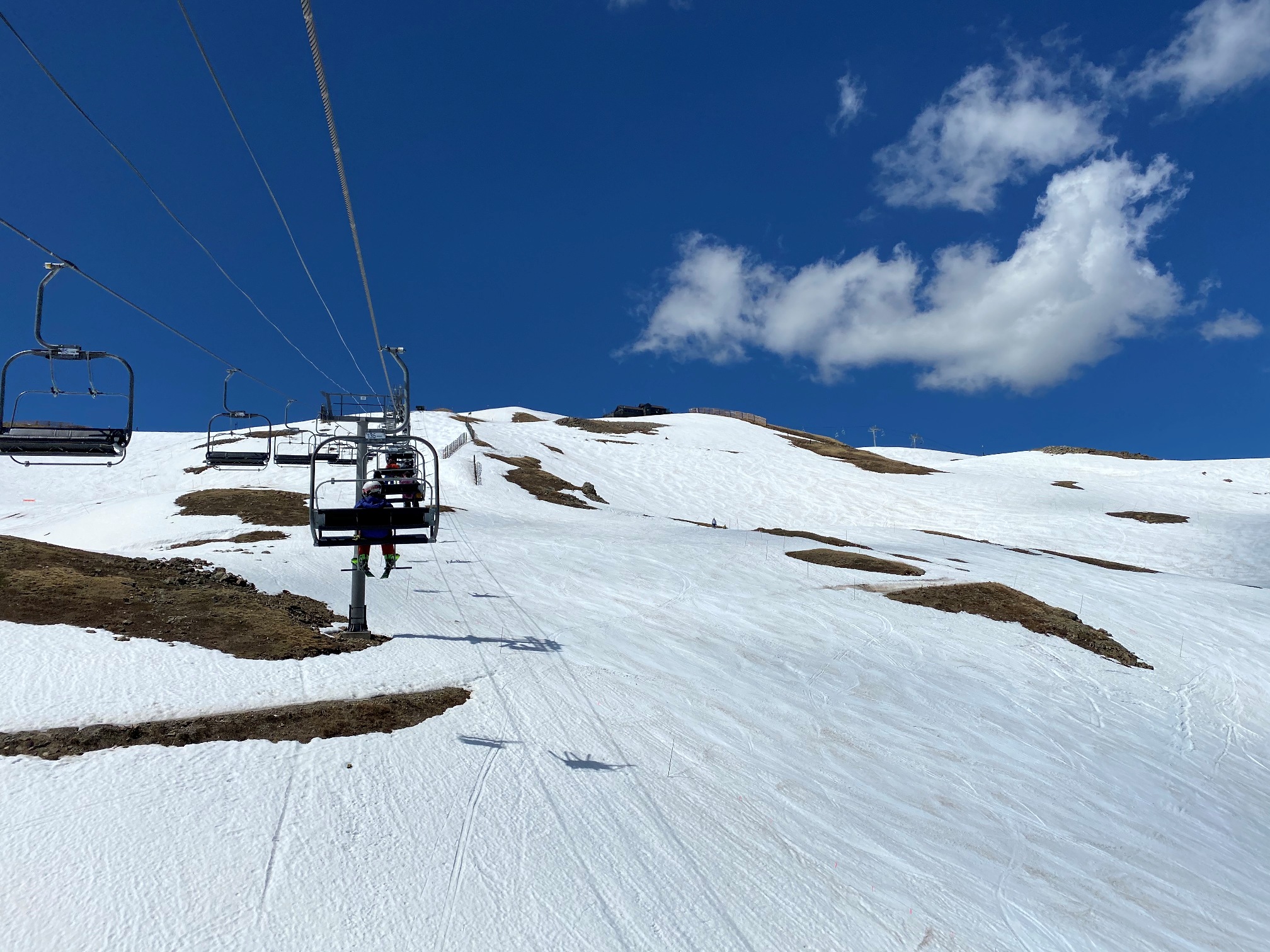 Later we skied nearly all of these. 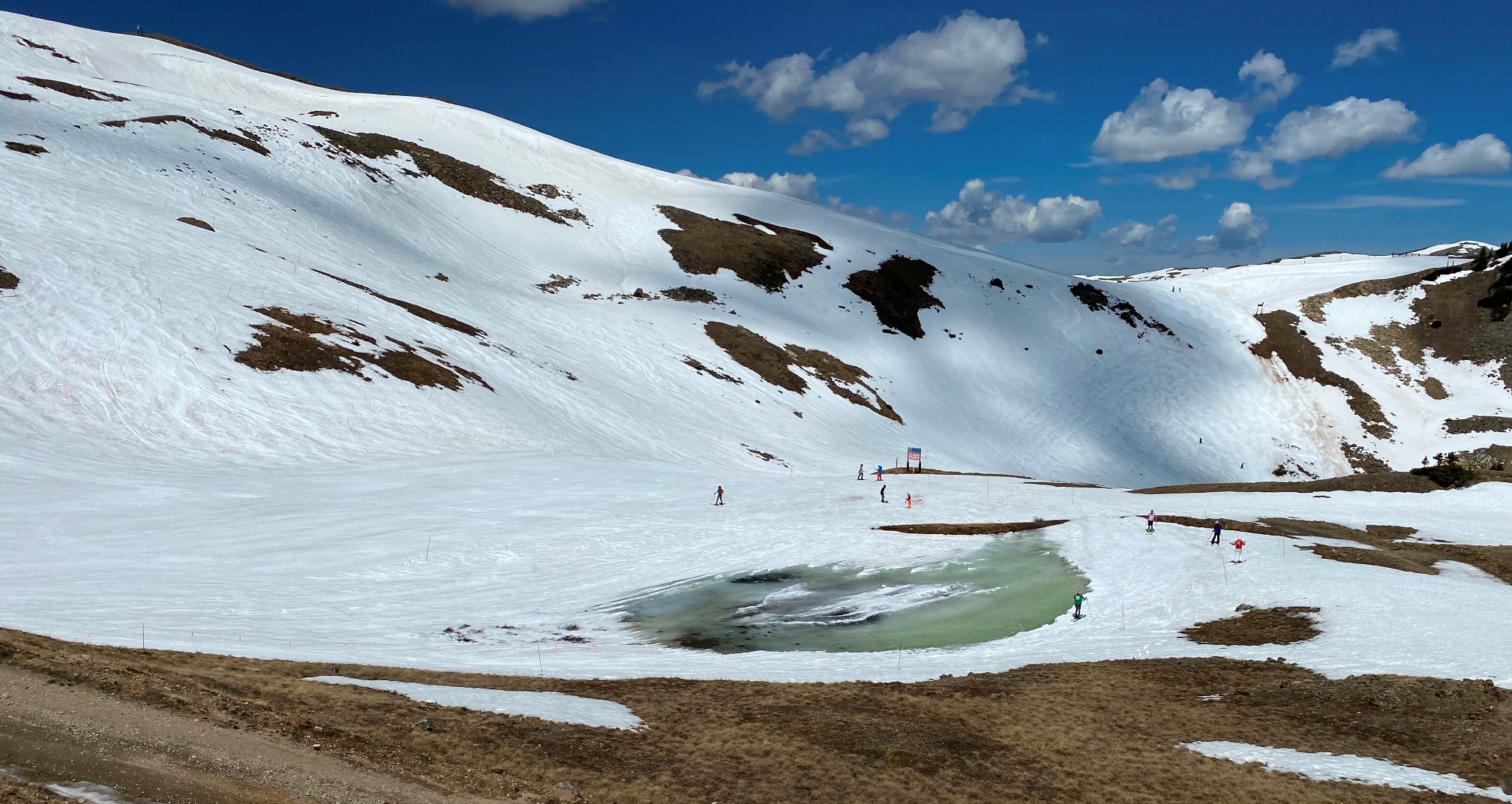 The approach is relatively flat so Paul wanted to skim the lake sooner rather than later when the snow might be slower. Paul did it twice because I screwed up the video the first time. I forgot my camera and had to use Paul’s phone. On the second run this snowboarder hit Lake Reveal in front of Paul. 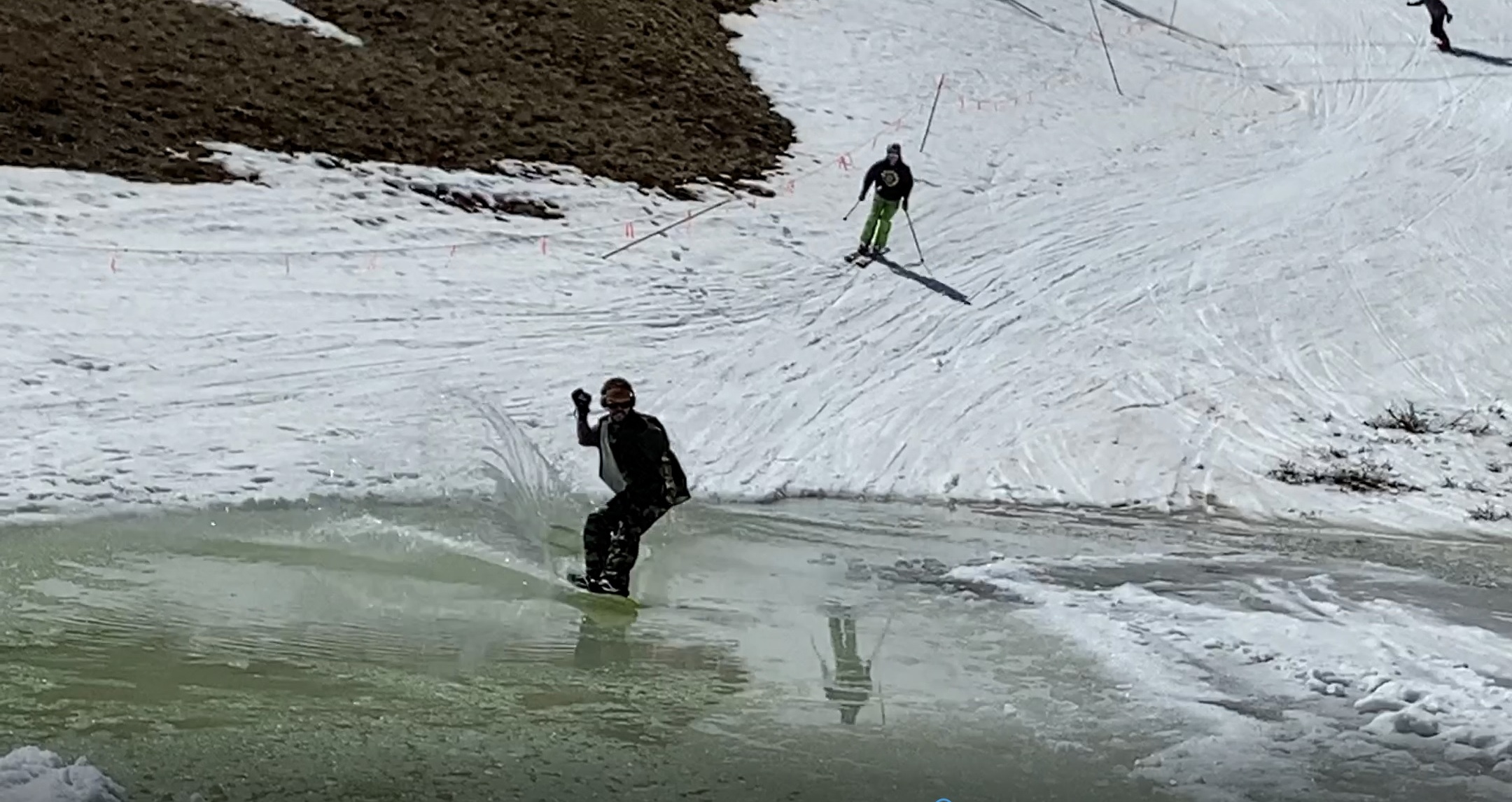 This boarder was not in Paul’s way, but a second snowboarder who did not skim the pond cut closer so Paul had to scrub some speed. So Paul took this line through skier’s right side of the pond. 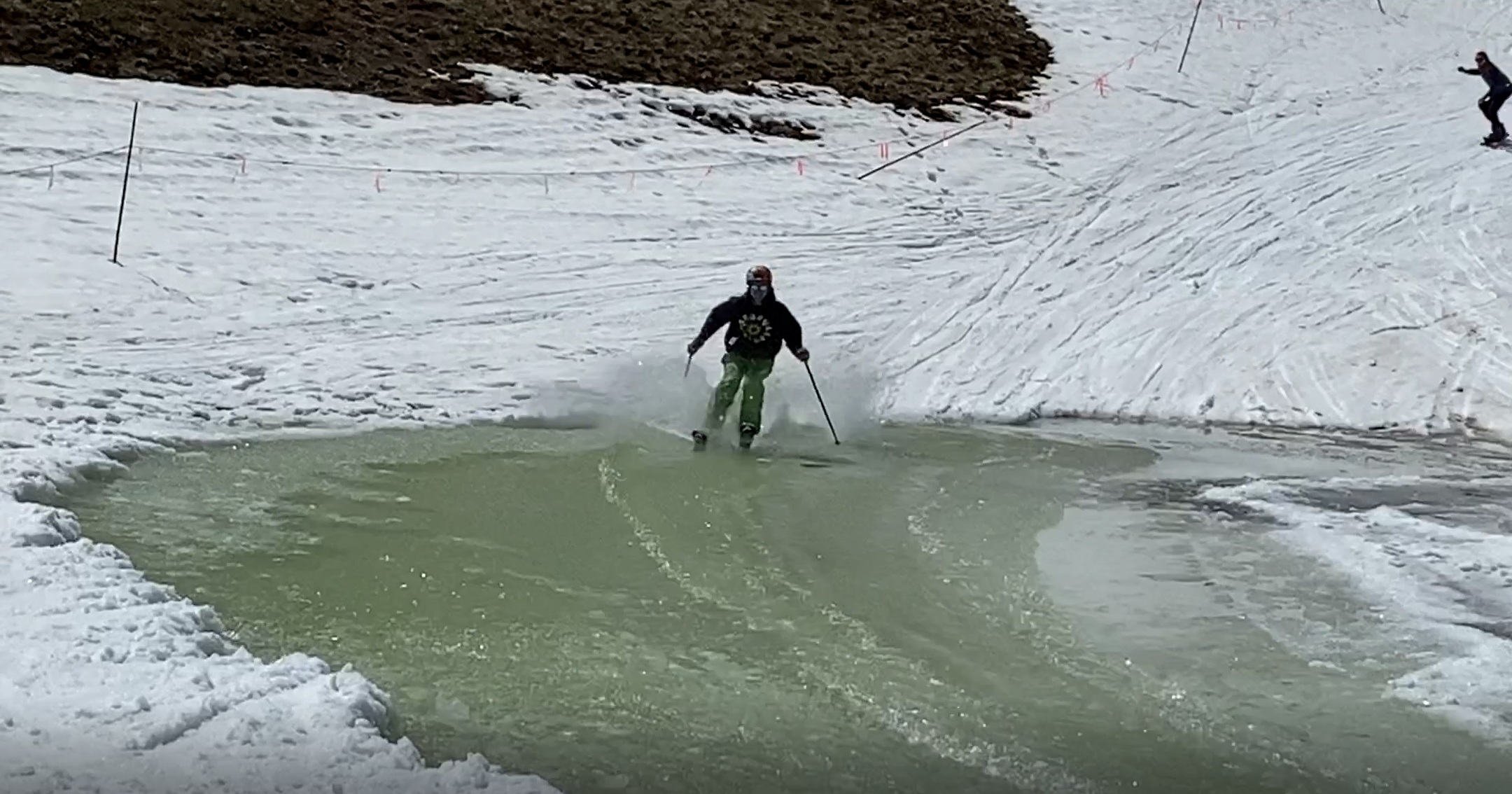 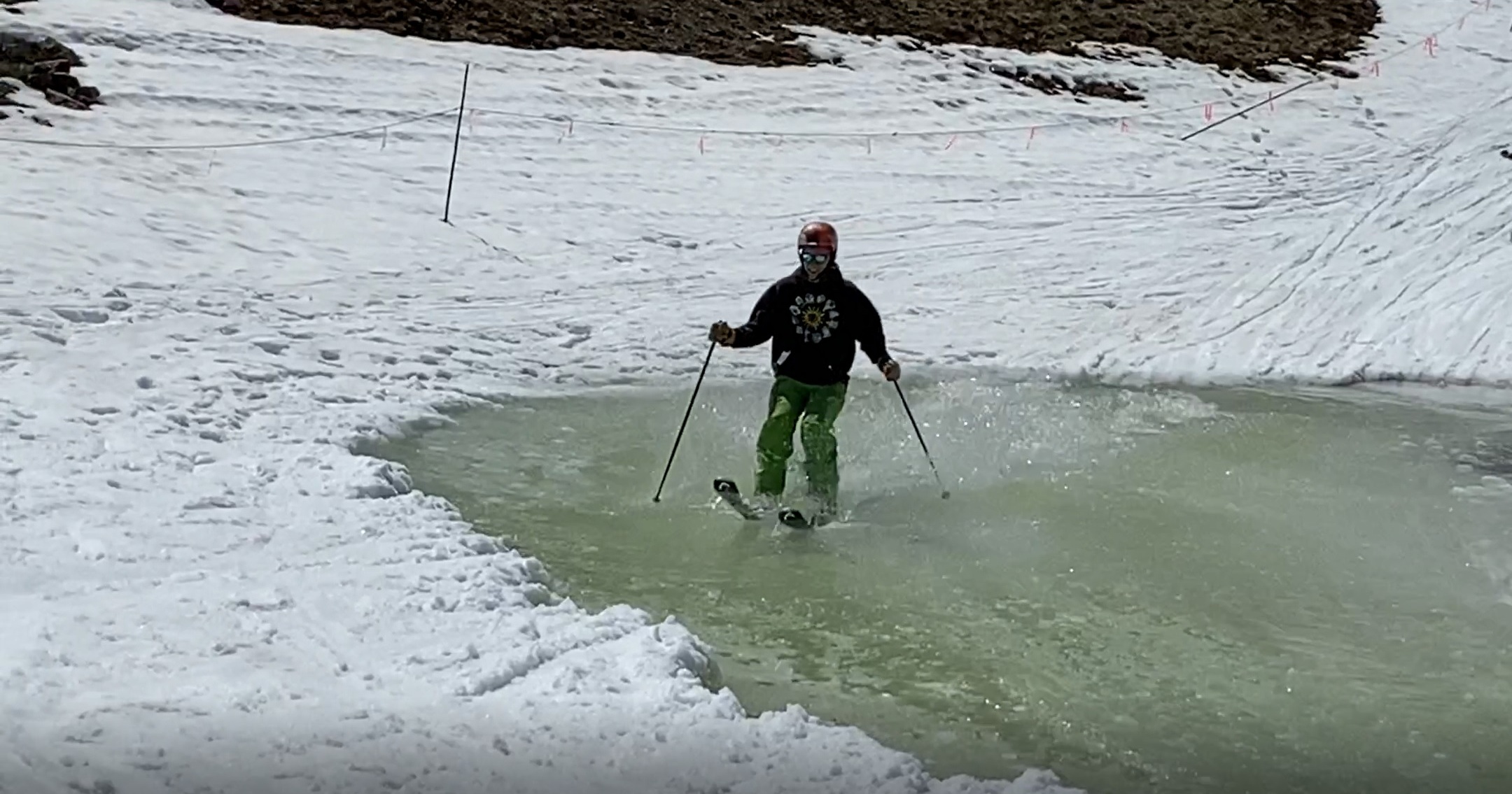 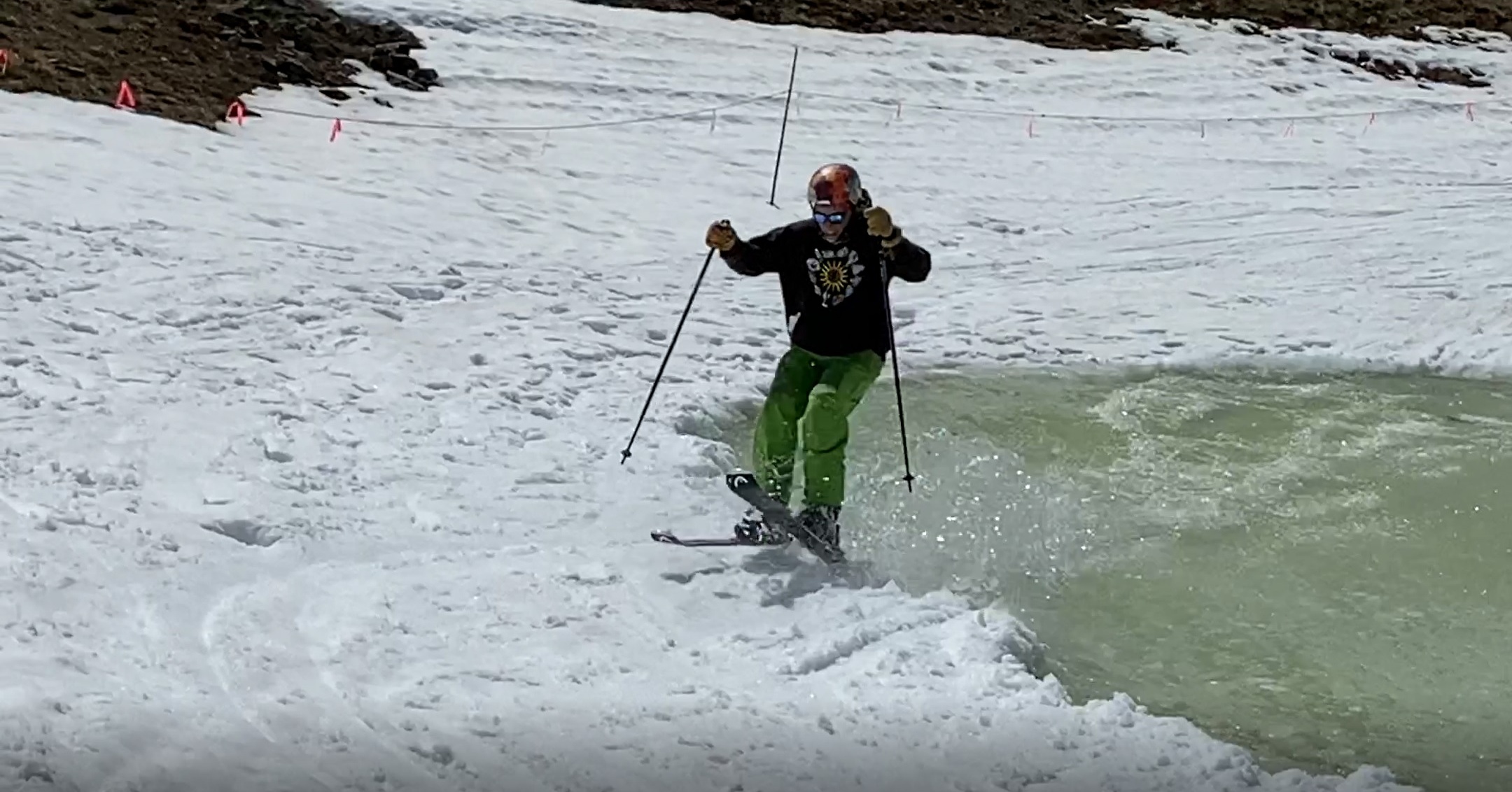 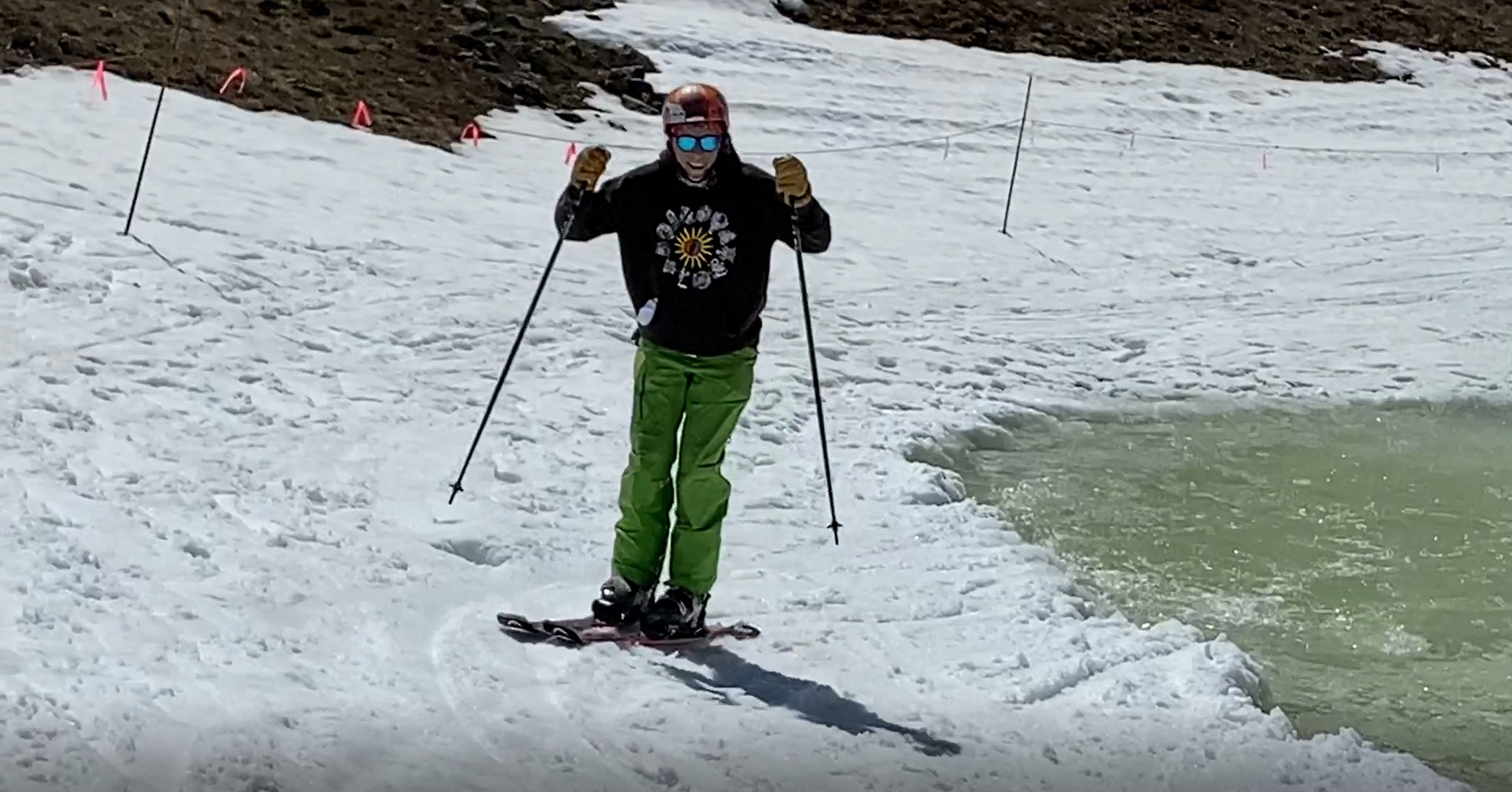 Early in the day we saw some mountain goats around the top of the Zuma lift. Later they move up this ridge. 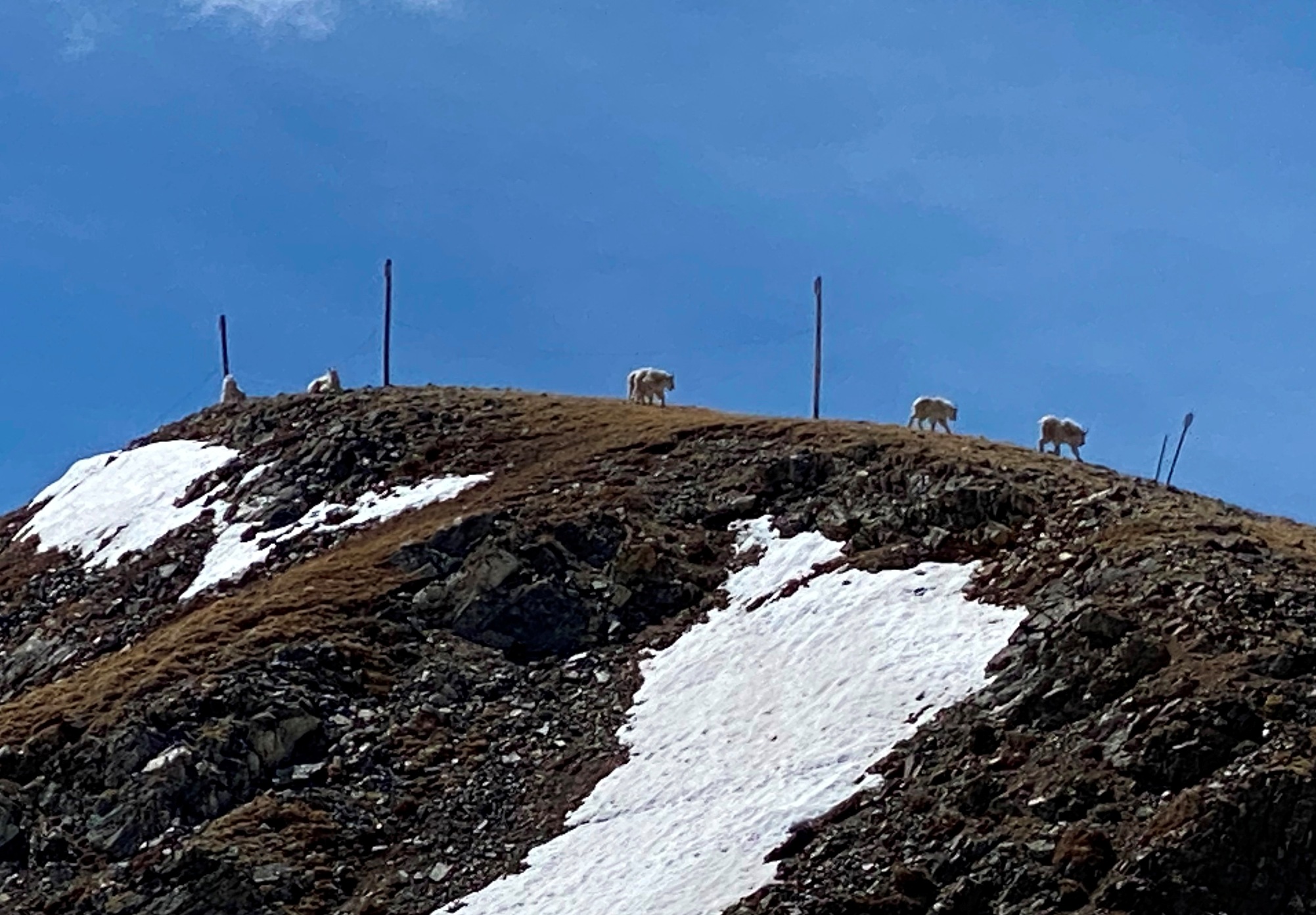 We skied Cornice run so I could look into the new Beavers terrain which I have never skied. 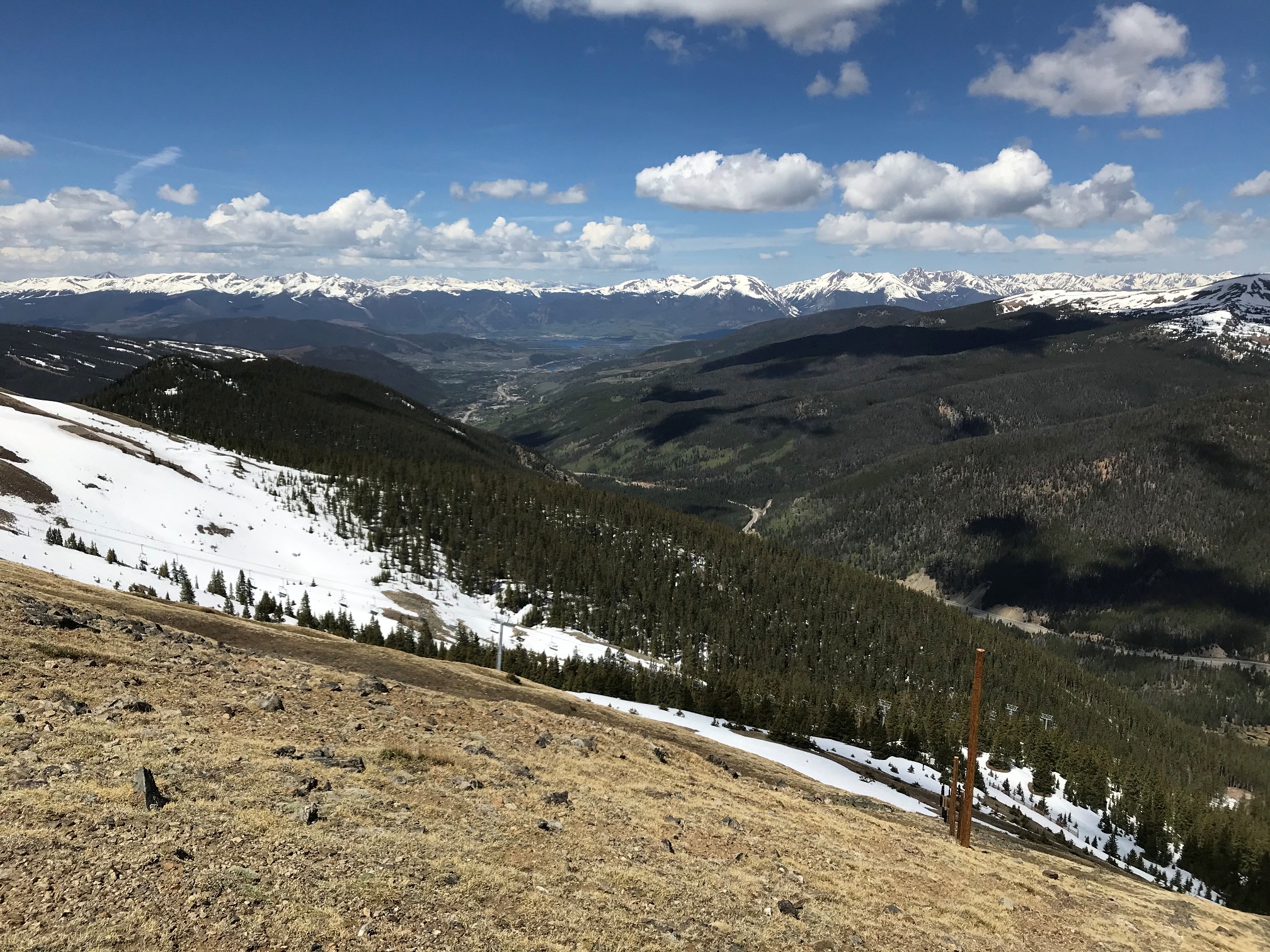 I’m on a viewpoint here with Keystone and Breckenridge in the background. 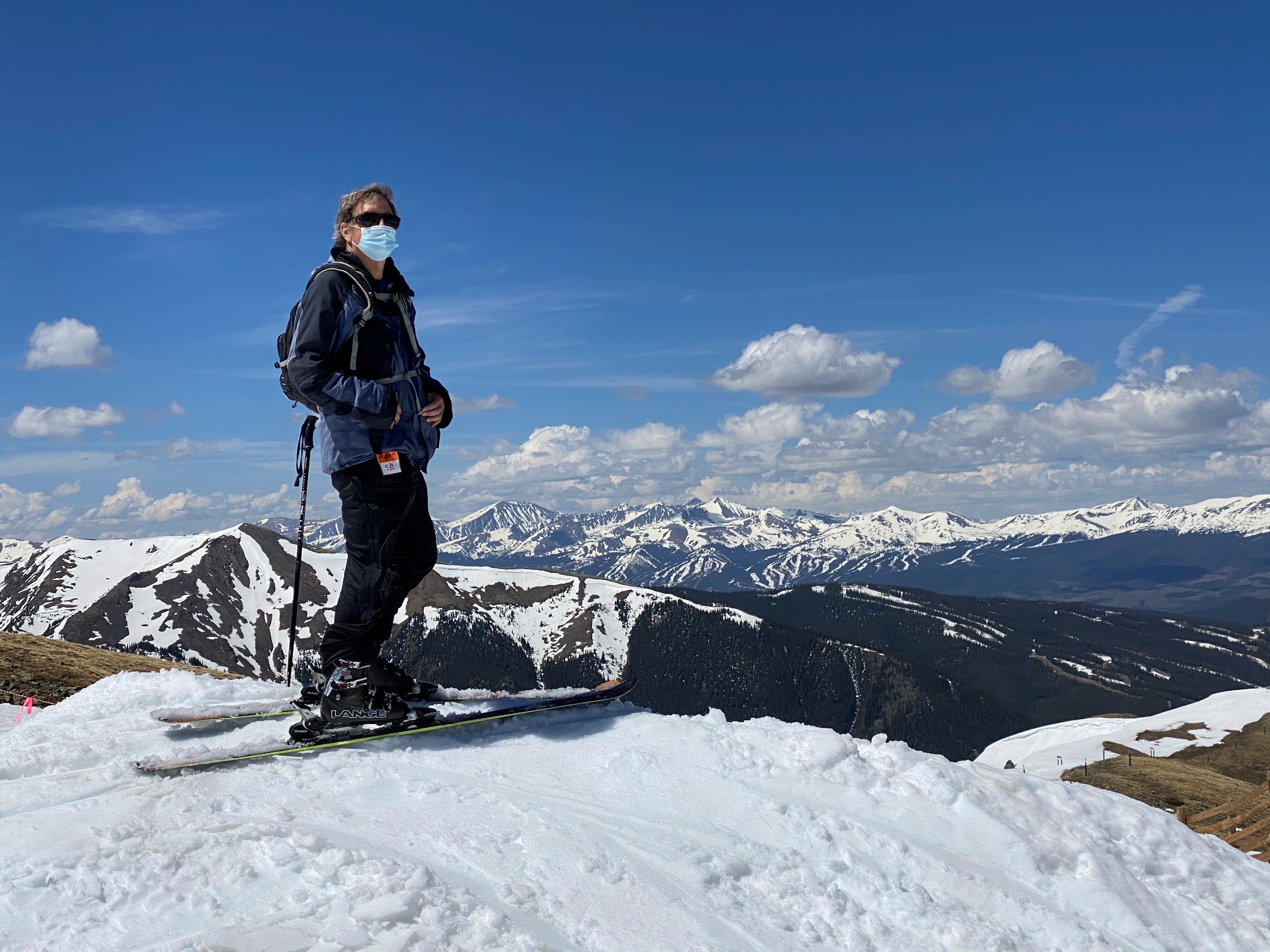 From Cornice we skied deep moguls on West Wall and returned for an encore later.
Lenawee’s liftline was no more than Thunder’s at Baldy today, but it is signed for social distancing. 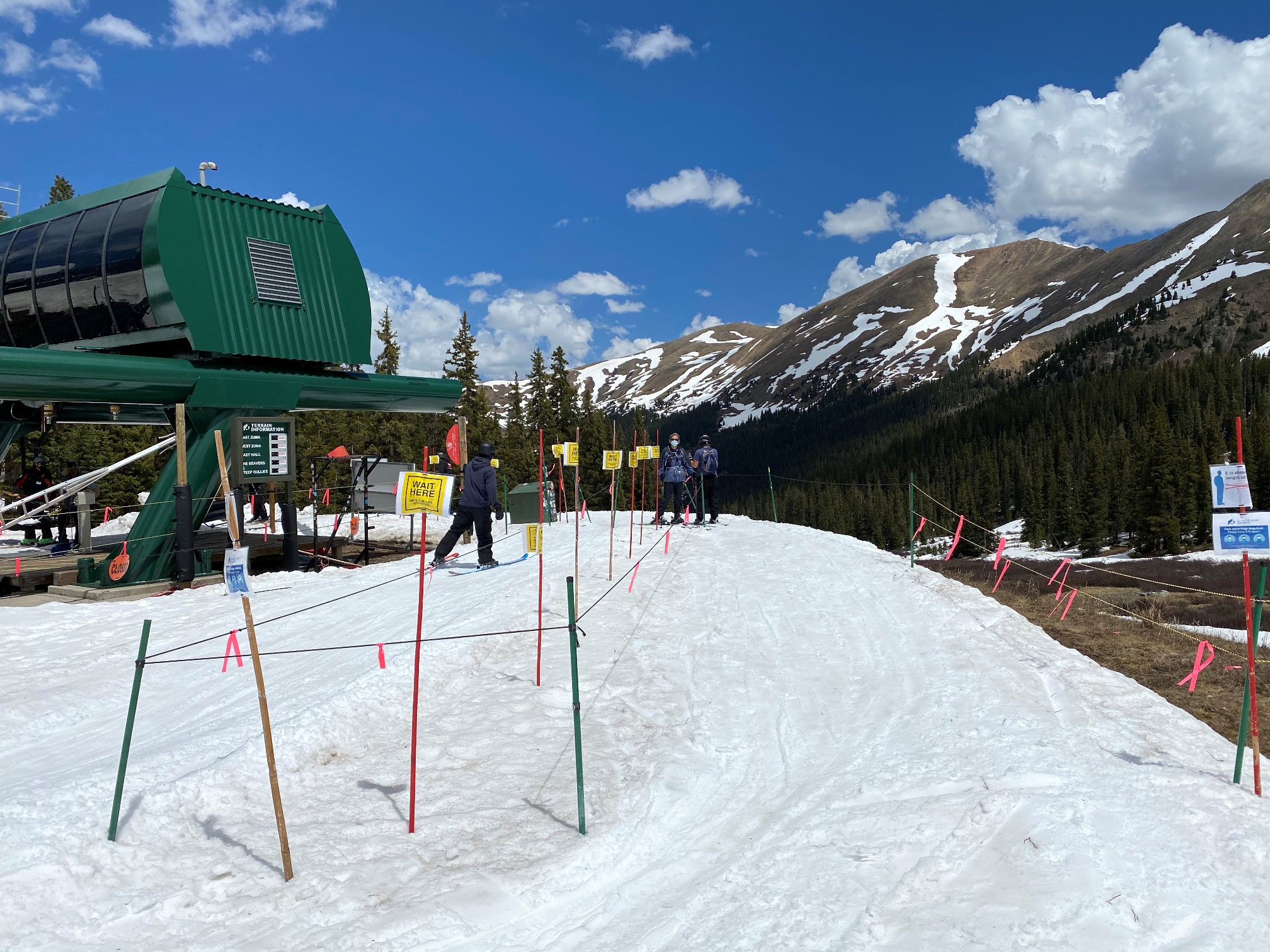 The Sundance run to the base has been farmed, stripping its right half to make the left half last longer. 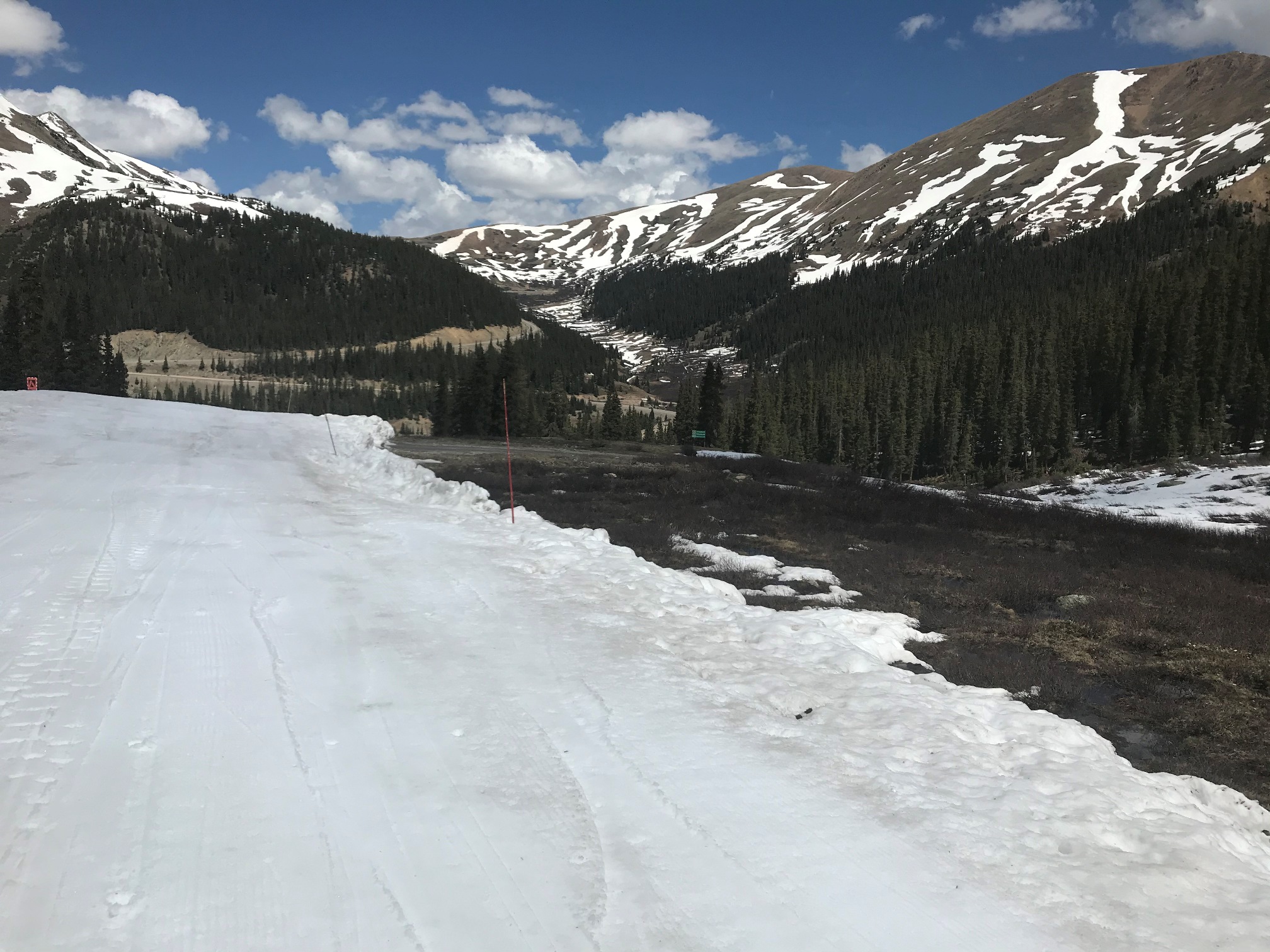 There were intermittent clouds after 11AM and combined with the 12,000 foot altitude snow never got sticky even on flat sections. So we skied to 1:30, when I got a pulled pork sandwich at Black Mountain Lodge’s outside grill. 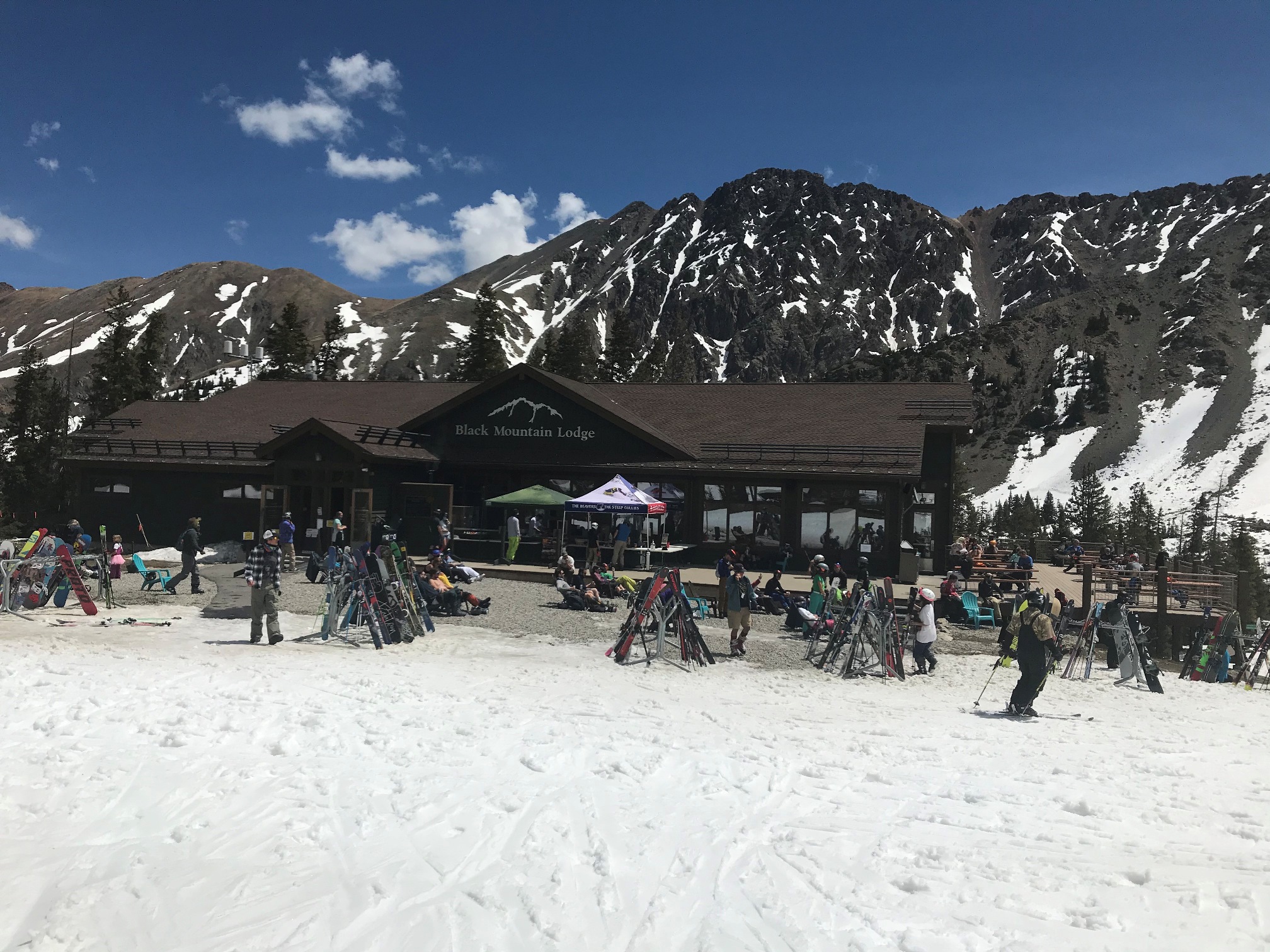 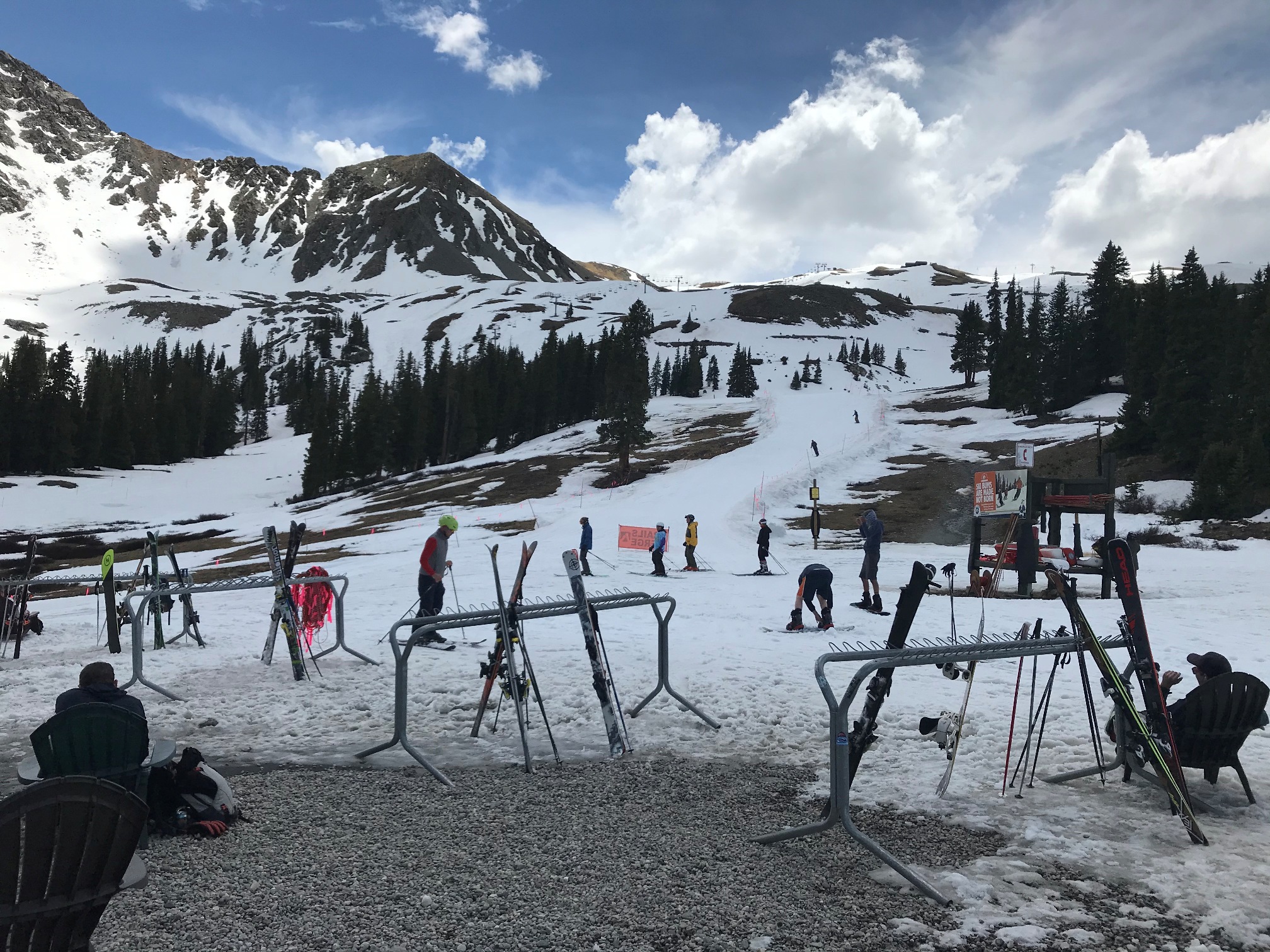 The photo of you in the mask will be one to look back on.
Nice report. It appears none of the terrain had been groomed? I guess this is typical in late spring and summer as the unfrozen snow would be too soft for a groomer?

Sbooker":1rmj71p9 said:
It appears none of the terrain had been groomed? I guess this is typical in late spring and summer as the unfrozen snow would be too soft for a groomer?
Click to expand...

That seems a good insight. Mammoth grooms to the bitter end. You can find links to my reports from there at later dates than this at the bottom of this page: http://www.bestsnow.net/vft_seas.htm

Mammoth's salting probably sets up the snow enough for grooming. Mammoth will also do a second round of salting/grooming mid-morning on the warmest days. The visual impression sbooker has was part of the reason I thought A-Basin's snow might be very mushy by noon. But 12,000 foot altitude is quite a virtue for snow preservation so that early pessimistic impression was incorrect.

Paul has been skiing A-Basin to its close nearly as long as I have been at Mammoth. He said snow conditions were typical for June but coverage was below average for June 1 and about the same as at the July 4 closing in 2019.

A-Basin will run daily to Sunday June 7 and will attempt weekends after that. Paul is skeptical as Lake Reveal normally appears about one week before closing. By June 13 he thinks the bottom will melt out and thus skiing could only be done on Lenawee with downloading on Black. The only time Paul saw that was the one year A-Basin made it to August. That was probably 1995, the first time that happened at Mammoth also.

A-Basin remains in high demand. I'm 0-for-4 in the "other passes" lottery. Paul is so far 1-for-8 in the A-Basin passholder lottery. FYI Larry Schick failed in his first attempt to get a reservation at Crystal.

Staff member
Paul won a second A-Basin day tomorrow Thursday. But I'm driving to Wichita tomorrow on my way to Liz in Florida.

Just so you're not waiting, there will be no ABasin TR's from me. I'm 2000 miles away dealing with family emergency.

That said, May was above normal temps this year (not by a ton, but...) and so the snow you saw is lower than average for this time of year, but probably not by too much - maybe a week or two melting ahead of schedule by the looks of it. I wish ABasin was a bit more liberal and would let you walk over to the top of all the good looking stuff under lower Lenawee lift instead of closing it off. It's pretty much a flat spot and would be a rather short hike for some fun turns.

Staff member
Yes EMSC’s observation was my only criticism of A-Basin’s operation. Just like Garry said about Baldy, Paul’s comment that A-Basin would not get past this upcoming Sunday turned out to be correct. If you want to know when a late season ski area will run out of snow, ask a local who has skied a lot of late seasons there. I predicted over a month in advance that Mammoth would not make its projected August closing in 2019.

Staff member
Some more detail about A-Basin from the NASJA Zoom meeting today:
In the first few days of the lottery there was a substantial no-show rate, perhaps 1/4 to 1/3. A-Basin then adjusted their reservations to a best estimate of 600 people actually showing up. I would guess there were fewer than 600 people on June 1 considering that lift lines never exceeded 3-5 people. I did see pics of lift lines on the weekend of May 30-31.
You must log in or register to reply here.
Share:
Facebook Twitter Reddit Pinterest Tumblr WhatsApp Email Share Link
Top