I did the 515 mile solo drive from San Jose to Sunriver in 9 hrs, arriving about 11 PM and spent the night in a quiet place in the back of my SUV. After an excellent two pancake, two egg and Italian sausage breakfast at Cafe Sintra, I got my free ticket, from attending TGR movie in SF and loaded Pine Marten lift before 9 am. I skied down to Sunrise chair which is too flat, then went up and completed my first lap down groomed Beverly Hills on Summit chair. The wind was probably 20-25 mph coming around the N side of Bachelor and depositing some snow. The groomer was excellent and nearly empty early although some racers were hitting it at very high speeds. My ski tracking app shows 8 laps on Summit by about 10:30 when I went further E and skied the current boundary line at Healy East. I followed a small group out there, but they all traversed back, probably all the way to groomer. I skied it and found some too firm and irregular surfaces and some good softening and wind-deposited snow. I ended up at Sunrise chair. View attachment 7 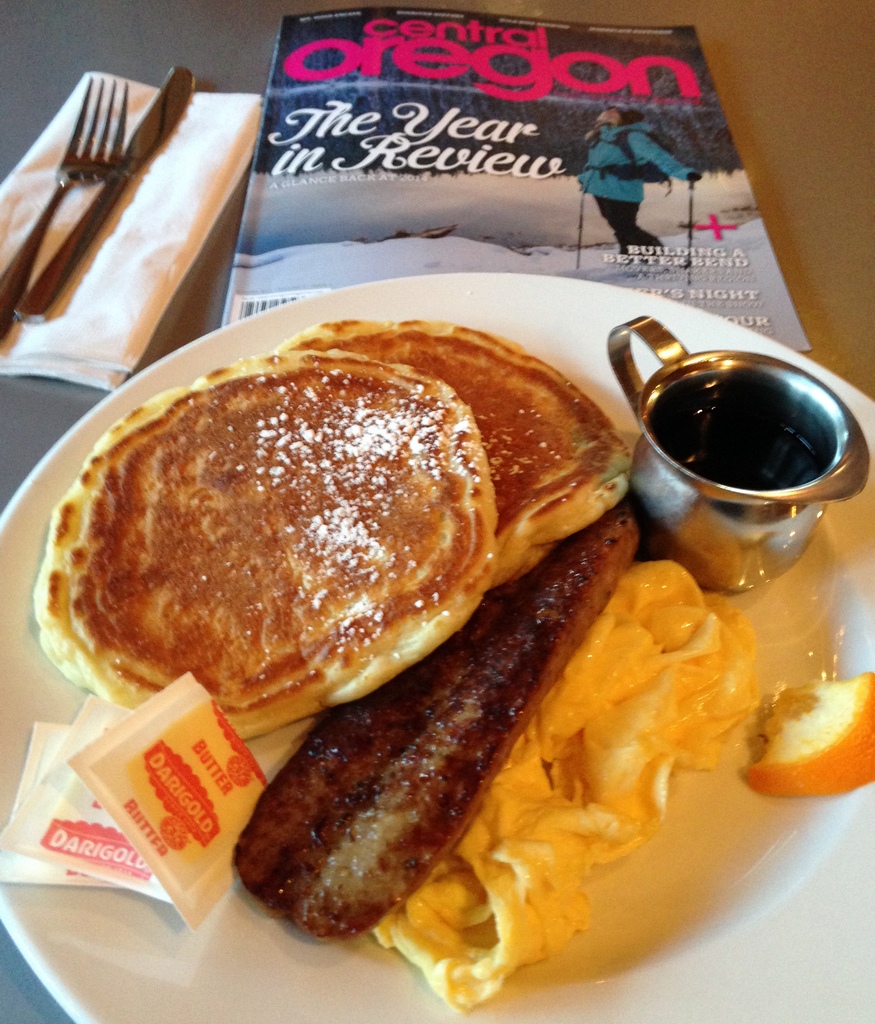 On a couple of early Summit runs I took a gravity traverse into The Cirque where snow was still winter-like. The exit is interesting as there is a huge moraine that you can easily go around to the E, but if you go around to the W you need to carry a lot of speed as there is almost a 100 foot rise to get out. Next time up Summit I hiked over the top of Bachelor to what I think is the West Wall. Snow was excellent at the top and there was many good places the rest of the way I came down, mostly going N all the way to base I rode up Pine Marten and skied to Outback chair (although both me and guy I rode with thought we were on Northwest until we got to the top). Snow was good with right, sunny side of runs starting to soften and left, tree-shaded side of many runs over here holding winter snow. Next run I pushed further and crossed one thin spot to get to Northwest. I skied down still a little firm Devil's Backbone, then went up and skied to base where huge vendor demo event was going on. I could not get anyone to give me any skis to try, but did get some swag including a Go-Pro t-shirt, wafer Power Bars and candy. I also was given a Coors light, re-filled my water bottle, had some veggies with dip and tried some slices of excellent Hood River pears brought by a rep who is a grower. I carefully wrapped one in my fleece helmet liner and it looks like it survived the afternoon.[/attachment] 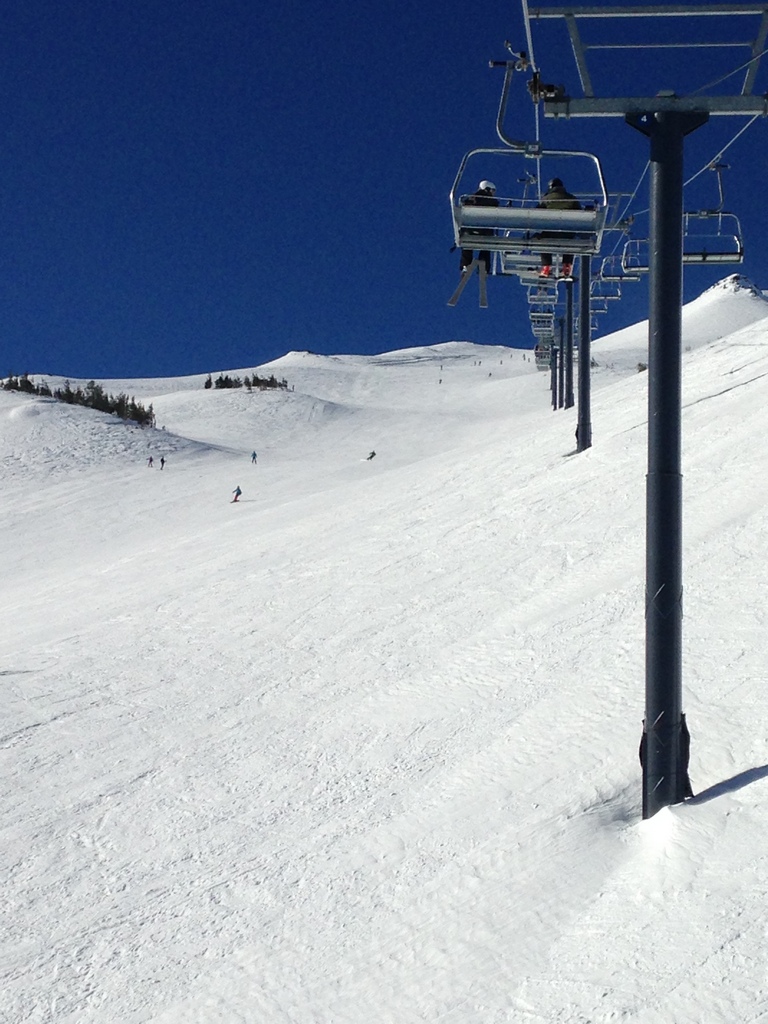 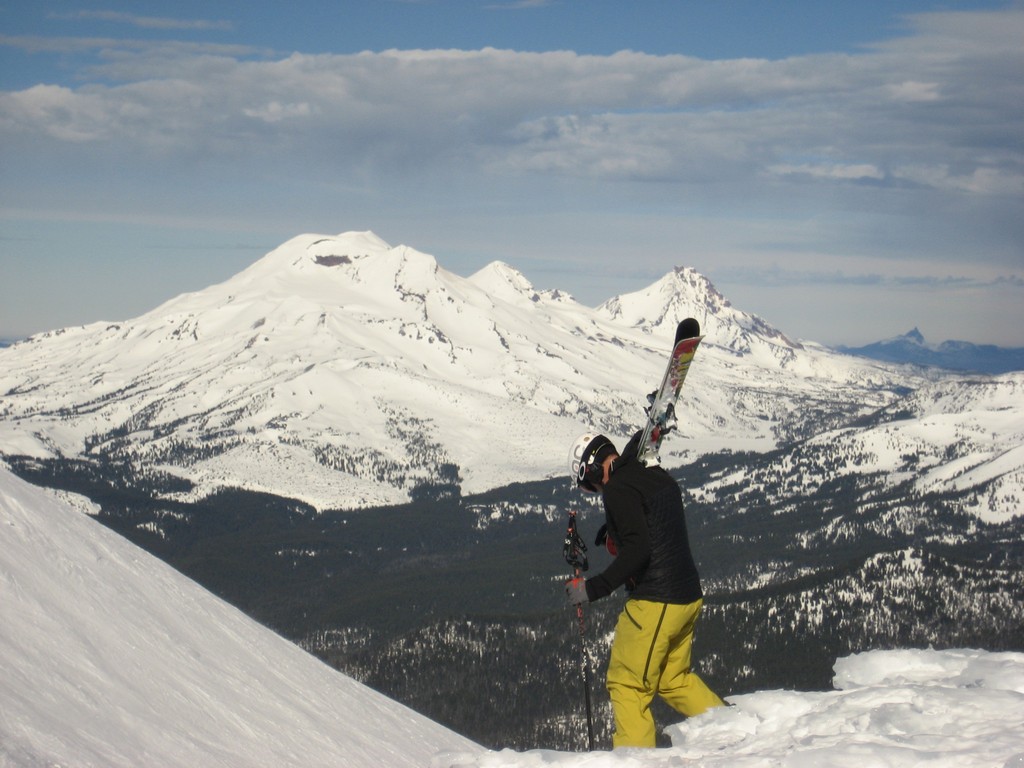 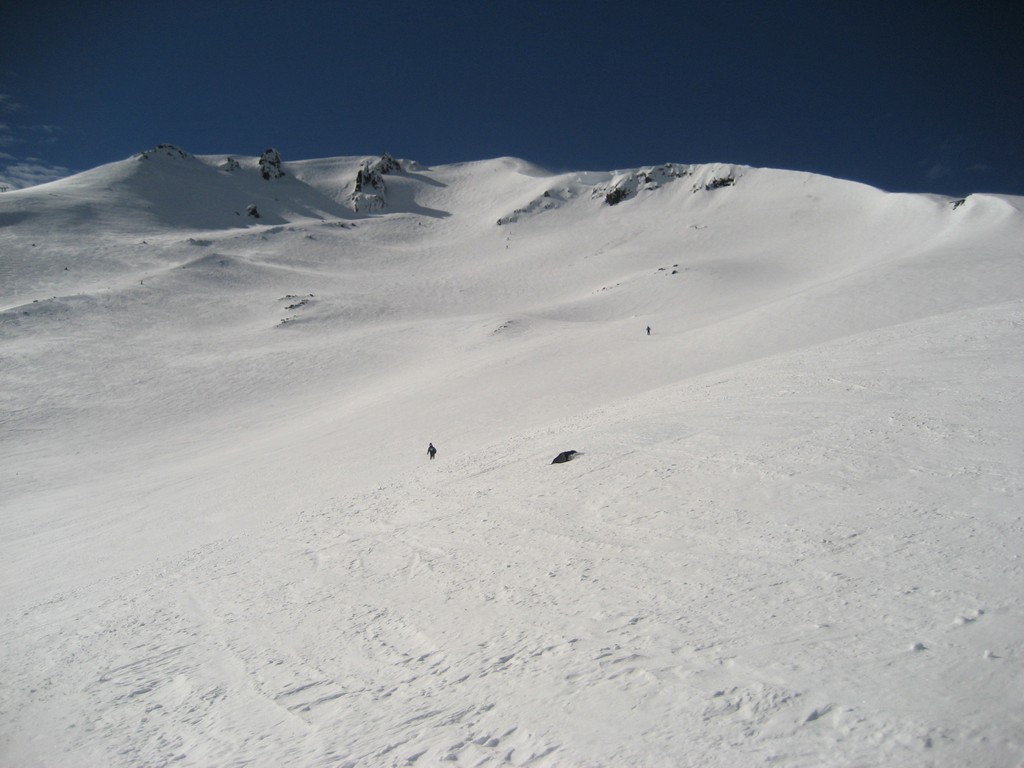 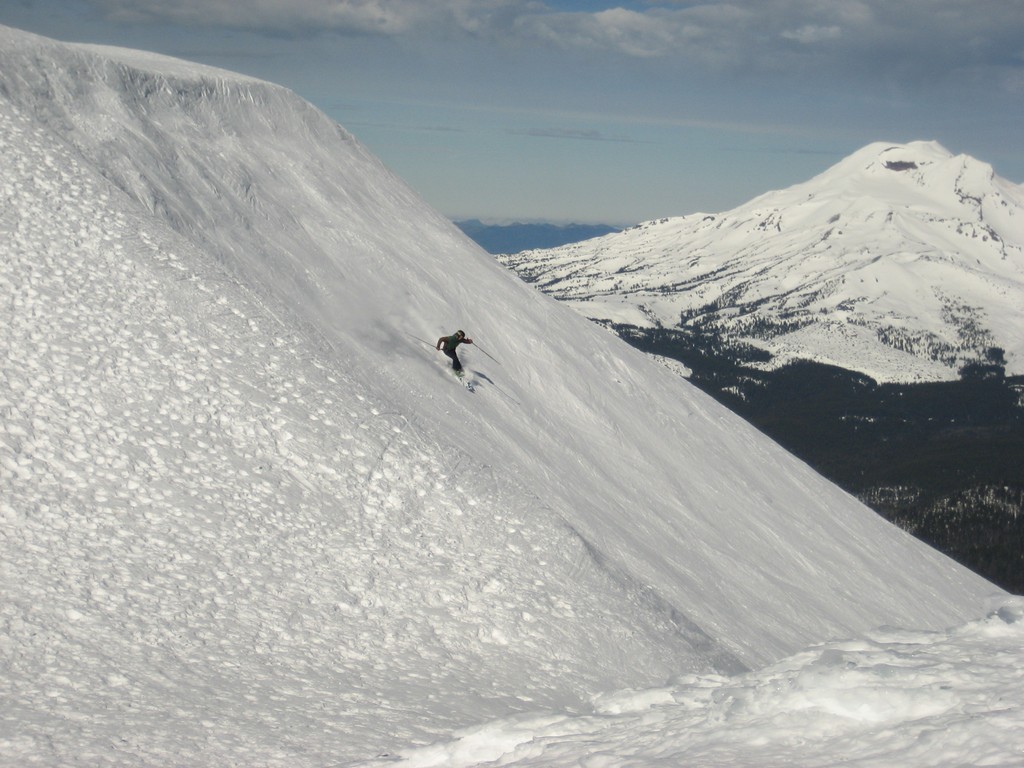 When I saw I had to ride slow Red chair to get out of there without a hike, I went back and got a free PBR for the ride. I returned to Summit and rode it four more times, first on now way more crowded groomer to warm up, then further E where I skied some corn and wind deposited (and some crappy) snow). I made another hike to the top of the West Wall with a telemarker who I lost on way down. Snow was still good, but light was already too flat. At about 2:30, I took my last ride on Summit and did gravity traverse towards Cirque, then an early face before a long traverse with a couple of short pitches to get on top of West Ridge. I was able to find very good snow that was mostly in the sun to the middle of Northwest Crossover where I skied Snapshot Alley. Runs on Northwest and Outback were good where in sun, but starting to firm where shaded and some thin spots were starting to develop near the bottom that were hard to avoid at high speeds I was traveling. I thought I had time for one more lap on Outback, but did not want to pass closed signs so I ended my day skiing Pine Marten twice including hitting fast and fun banked slalom on lower part. Ungroomed Grotto was very good when I quit about 3:45 with 45.6K vertical according to watch, my lifetime best. Even though snowfall so far this year at Bachelor is below average, the mid-mountain base is 90" which according onthesnow is only bettered in the West by Kelly Canyon, ID. (Sugar and Hunter Mountains in the East both report 108"). I will try to be back next year and hope to bring my wife, who skied here almost 30 years ago as a beginner and could handle Summit groomer, and my son.

Sorry, but pictures got a little out of order and I don't have time to fix as I have another 500+ miles drive today. Three more pictures.

46K vertical after sleeping in car ......a great start. Keep your reports coming,thanks.

tseeb":1gydsol7 said:
according onthesnow is only bettered in the West by Kelly Canyon, ID.
Click to expand...

Never trust suspicious "consolidator site" stats. Liz and I thought about trying Kelly Canyon on the way from Targhee to SLC in January. The numbers OnTheSnow shows for base depths are actually for snowfall. Kelly Canyon's elevation range is 5,600 - 6,600, so no way would base depths be very big now after the sustained warm weather.

It's nice to have someone else do the talking. Conditions here have been exceptional considering the lack of average snowfall. I've met people from all over the far west who are here to get in some snow time. I was hoping to meet up with tseeb but my son Carson was here with Ride Snowboards doing an on snow demo event.

I remember the disastrous winter of 76/77 when I was living in Mammoth. Good thing they have snowmaking now, it saved their asses so far this season. Locals here said they were hiking to the summit of Bachelor over Christmas vacation, on foot! There was no snow. We got lucky with some wet and warm storms earlier this season. The snow level was literally at the base of West Village. That's why tseeb found very thin snow cover a mere 300 vertical feet lower at the base of Outback. I went down NWX yesterday and it's scary thin. Yet the regular frontside and especially the upper Summit runs are skiing all time!
This season has had all the same analog characteristics of 76/77. My point here is that it started to snow in late Feb/ March that season, and I predict it will this spring as the stubborn blocking high finally breaks down and the westerlies return. Nothing lasts forever and Boston will soon be basking in early spring warmth and the west will get hammered. The other reason I'm making this point is that I'm leaving for Baja on March 7th for two weeks so there will be a huge storm cycle here for sure! Go figure.

schubwa":3jm0dn31 said:
This season has had all the same analog characteristics of 76/77. My point here is that it started to snow in late Feb/ March that season, and I predict it will this spring as the stubborn blocking high finally breaks down and the westerlies return. Nothing lasts forever and Boston will soon be basking in early spring warmth and the west will get hammered. The other reason I'm making this point is that I'm leaving for Baja on March 7th for two weeks so there will be a huge storm cycle here for sure! Go figure.
Click to expand...