Nevados de Chillan was a mixed bag. The worst wind I'd experienced. It snowed twice but the wind got at it. The visibility was poor many of the days. The new operator of the resort is very 'conservative' operating the lifts and shuts them down when only a few crazy Americans would be out there.

I experienced my first train wreck 20 km south of Santiago when the Terra Sur train I was on hit a truck hauling a load of grain bound for a pasta factory. The truck was totaled. The front of the train was a mess. One minor injury. A local train stopped next to us and brought us back to the central station in Santiago where an identical replacement train was waiting for us. Same seat. Only arrived in Chillan 90 minutes late.

Day 1 was sunny with high wind. The conditions midmountain were refrozen spring conditions. The roaring wind had pushed windblown from the top of the mountain down into all the gulleys so there was actually some pretty nice skiing off the surface lifts. 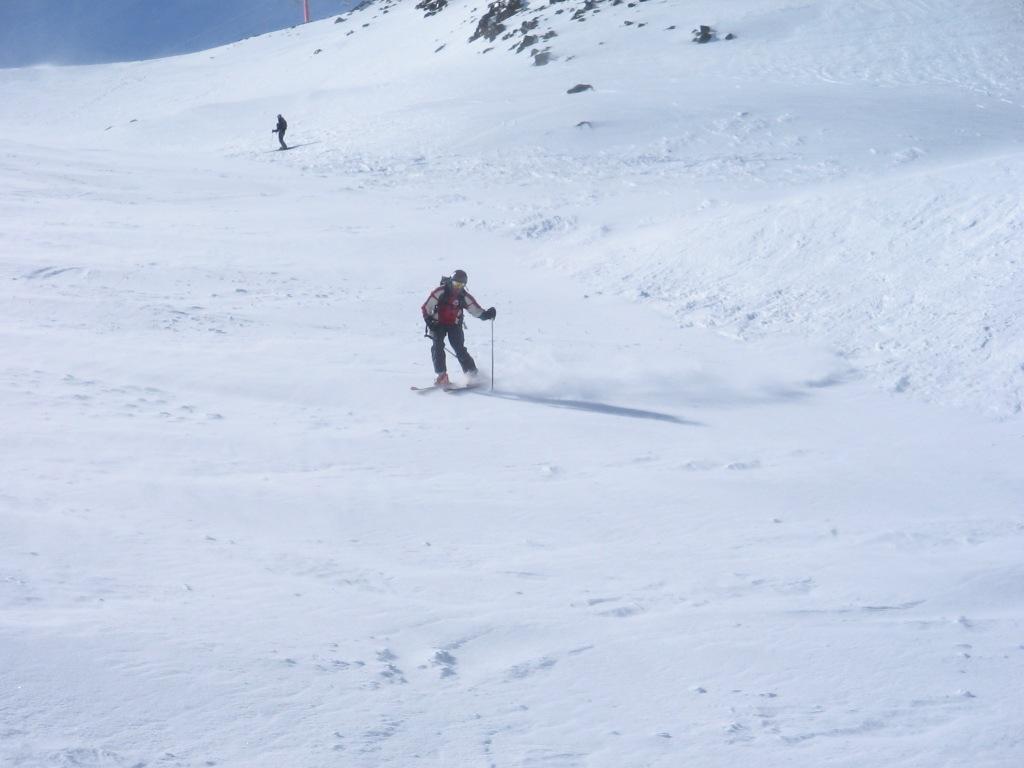 Day 2 was a disaster. Big winds and they only ran the lower mountain double chair which services really uninteresting terrain. I took a half-dozen runs through the trees at least trying to elevate my pulse a little.

Day 3 was a nice powder day with more than a foot on the ground midmountain but you couldn't get to the top. Some rain at the bottom that changed to snow later in the day. You could traverse over to the Don Otto midstation and access the terrain there. Really lousy visibility with some of the worst whiteout conditions I can remember. Day 4 had some sun but the high winds continued. Another day spent on the surface lifts skiing wind packed powder. Day 5, we finally saw the Don Otto after another foot of snow fell overnight. The sun broke through from time to time but the visibility degraded after around 1:30. The skiing was quite challenging because of the wind packing and you really had to stay focused to keep your tips from submarining. Lower down, it turned to Sierra Cement as it warmed up during the day.

Day 6, the wind turned back on and it was back to the surface lifts to get to anything. Midmountain softened up in the sun. You could find plenty of untracked windblown higher up. I left the resort at 4:00 to catch the 6pm train back to Santiago.

Day 7, a day trip from Santiago up to Valle Nevado. A bluebird sunny day. The skiing surface off piste was a little crispy other than the highest south-facing aspects of the mountain. The Tres Puntas platter lift was OK and under the high speed quad was OK. Everywhere else, it wasn't very soft when you left the groomed piste. I dropped off the back side and did a couple of laps riding the quad at the far side of La Parva. The snow wasn't anywhere near good enough to bother trying to ski the out of bounds from the back side of the el Colorado T-bar down to the Valle Nevado access road.

I'm bumping this because Geoff posted photos... along with skibum4ever's, they'll probably be the only SA pix I see this season.
:-"

jamesdeluxe":140ld12r said:
along with skibum4ever's, they'll probably be the only SA pix I see this season.
:-"
Click to expand...