For the final stop of this road trip, the Espace Diamant -- roughly translated as "the Diamond Region" or "Diamond Area" (it sounds better in French than in English) -- we left our hotel in Megève, where five inches had fallen overnight in the village, double that higher up. Here's our Peugeot halfway through the snow removal process:

As the crow flies, it's a very short distance to the Espace Diamant, but in a car you go up and over gorges, valleys, villages, etc., so maybe a 30-minute drive. According to reports, in the next five years they're possibly going to connect it with Megève and eventually neighboring Les Contamines, which would surpass the 3 Vallees in trail kilometers and result in the largest interconnected ski region in the world.

We pulled into our base for the next two days, the cute village of Crest-Voland, built around, what else, an old church:

While parking our car, we saw something that we hadn't run into in other villages: lots of children. The very first ski class that a small child takes anywhere in France is called "Piou-Piou" (pronounced PYOO PYOO), which means "baby chicken." Crest-Voland, along with a significant part of the Espace Diamant, is proudly family-oriented: everything from restaurants to ski terrain to activities:

We stopped for a quick coffee next to the lift:

Booted up and headed to mid-mountain for lunch:

... where I had roasted trout on a bed of leeks and reblochon cheese along with a cheesecake-y dessert topped by Belgian graham crackers:

Finally, it was time to ski.

They'd received the same 6-8 inch top-off that Megève did. Since I was with the wife, extensive forays into the off-piste weren't in the cards, so I bombed through soft chop alongside the trails:

... while she enjoyed the rolling groomers:

Albertville (1992 Olympics host city) is under the clouds in the distance:

A delightful local instructor, Françoise, showed us some of her favorite shots:

Even though all of our accommodations for the past week were pleasant, our favorite was here in Crest-Voland, the Hôtel Mont Charvin, which is ski-in/ski-out, has beautiful rustic décor throughout the rooms, restaurant, and bar, fantastic cuisine, and is run by a really friendly couple who go out of their way to welcome families, including their two American guests. There's something great about being in a full-service hotel where you also get to interact with the owners extensively.

Après-Ski Drinks at the Bar: 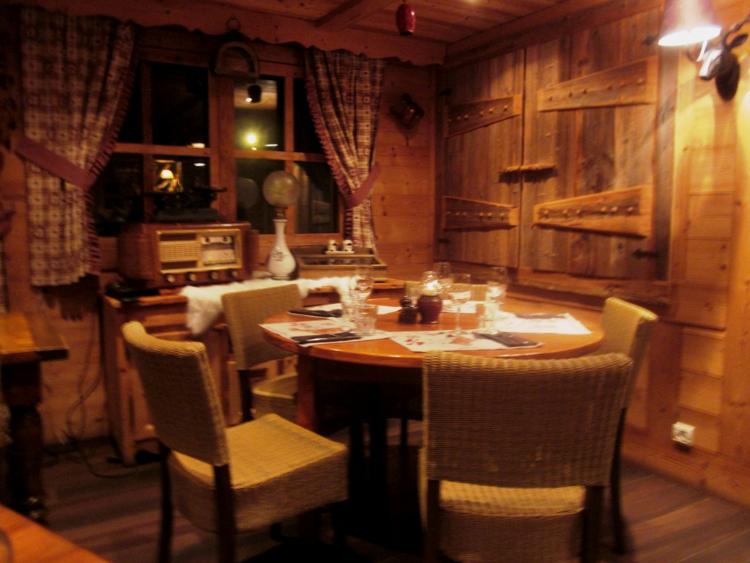 As usual, my wife makes friends with the family pooch:

Day 2
Saturday was our final outing and since we only managed to check out the skier's-right third of the Espace Diamant on Friday, it was important to get an early start to get an overview of the other two-thirds. The place is huge and on your first time there, you need to have decent navigating skills to move around efficiently. There are signs all over the place reminding you not to get stuck in a far-flung part of the region late in the day (to avoid paying a costly taxi ride to get back to your home base).

Here's a slightly closer shot of the map:

9 am at the Cernix lift right behind the hotel:

Tracked-Up Off the Douce Lift:

Like the other ski regions on this trip, they're not high-elevation for the Alps, but you'll find lots of above-treeline areas and loads of hidden nooks and crannies. Here's my wife taking advantage of low-angle powder in a vast meadow:

Heading down the Boulangère trail for lunch:

While the Espace Diamant has a sizable percentage of high-speed lifts, it’s also great to see many old drag lifts still in use to access the aforementioned nooks and crannies:

And of course, there are always lounge chairs to sit down in the sun and take it easy:

jamesdeluxe":20eah377 said:
Like the other ski regions on this trip, they're not high-elevation for the Alps, but you'll find lots of above-treeline areas and loads of hidden nooks and crannies.
Click to expand...

Which should make your week the optimal time frame in the long run. What is the local snow reputation vs. Portes-de-Soleil?

At any rate, James has provided enticing options for a flexible ski itinerary out of Geneva.

I chose these regions because they're some of the closest ones to Geneva with the obvious higher altitude options -- that reportedly avoided the previous Sunday's rain event, which locals said was an insane outlier for the end of January -- a bit further out.

Hometowners said that the Espace Diamant is in the same general snow league as La Clusaz/Grand Bornand; I'd like to get confirmation on that from Fraser. I also asked him to give his opinion to your earlier question about flying in and storm chasing for a two- to three-week period. He was in Zermatt while I was in France.

James - did you ever consider skiing Flaine/Grand Massif? Although Flaine proper is a typical 1960s French eyesore, but some of the satellite villages look quite nice (i.e. Samoens).

Also, it looks like it gets a ton of snow. Fraser thinks the top of the bowl gets 15 m??!!

Weather to ski - Blog: Why does Flaine have such a good snow record?

Fraser Wilkin explains why Flaine is such a good bet for snow...

Guide to snow reliability in Flaine (France), including ratings for snow cover, snow quality and powder.

ChrisC said:
James - did you ever consider skiing Flaine/Grand Massif?
Click to expand...

Yes, when I did that Haute Savoie road trip (Châtel, La Clusaz/Grand Bornand, Megève, Espace Diamant) in Feb 2016, Grand Massif was one of the circuits under consideration; however, the France Montagnes tourism people ultimately decided to send us to Espace Diamant, so that's where we went and it was great.

The following season, I flew into Geneva to ski the Valais region in western Switzerland and I haven't used that city as a gateway since. In any case, I agree; Grand Massif looks like an attractive circuit, hampered only by those hideous buildings in Flaine, as you mention. If they could knock them down and build something more attractive, it'd become a much more popular destination given that it's barely an hour from the airport. I'd love to create a road trip with half of the week there and the other half hitting nearby obscure areas like Praz de Lys. Maybe next year!

Looking at the pix above from the Espace Diamant region with North American eyes, it's hard to believe that its elevation is comparatively low, 1035-2070m, given all the above-treeline skiing.

ChrisC said:
James - did you ever consider skiing Flaine/Grand Massif? Although Flaine proper is a typical 1960s French eyesore, but some of the satellite villages look quite nice (i.e. Samoens).

Also, it looks like it gets a ton of snow. Fraser thinks the top of the bowl gets 15 m??!!

Weather to ski - Blog: Why does Flaine have such a good snow record?

Fraser Wilkin explains why Flaine is such a good bet for snow...

Guide to snow reliability in Flaine (France), including ratings for snow cover, snow quality and powder.

Flaine/Grand Massif is one of my favourite areas with extensive and highly varied terrain. The 60s Eastern block Bauhaus architecture is shocking for most first time visitors but can grow on you, and is considered quite trendy/cutting edge by some, especially now that the resort is making an effort to go much more upmarket. The main Flaine bowl does get a lot of snow, the 15m annual at the very top of the Grande Platiere is correct. I know is sounds implausible but bear in mind a couple of things: first, the figure is annual, whereas most European figures are November or December to April. At 2500m, quite a bit of snow can fall in May/June or September/October. Second, the Grande Platiere is very exposed to the north-west (direction from which most of the snow comes) yet right in front of the Massif de Mont Blanc with its macro-scale lifting effect.

Down in Flaine itself the November to April average is about 6m. So yes the Flaine bowl is snowy but don't assume this is some sort off-piste mecca. Actually the off-piste in the main bowl is very dangerous (unless you are with a local guide) as there are lots of rock bands and pot-holes. Only a few years back a 7 year old kid skied off the a run, got lost and went over a cliff just 50 yards or so from the marked piste. But don't be completely put off, there is some still some rewarding off-piste if you know where to find it + plenty of challenging marked terrain.

The main bowl is largely treeless but with some good punchy groomers of around 800m vertical. Outside the main bowl the terrain is much more varied with more trees BUT... is lower with more volatile snow conditions. When the snow is good though, some of my favourite pistes in the Alps are the long intermediate runs through the trees above Morillon 1100 and between Morillon 1100 and Saomens 1600.

So where to stay? Samoens is cute, a proper small French town with good links to the skiing but, depending on where you are staying, you are likely to need transport to get to the lifts. Les Carroz is also a proper french village, a bit higher than Samoens and perhaps slightly better placed overall. It's not quite as cute though and again it can be a bit of a trek to the lifts. Flaine, as discussed, is the most convenient of the main resorts and with more of a high mountain feel. Morillon is another option, a small village just along the valley from Samoens but nothing special. Or you could consider the satellite resort of Morillon 1100, tiny purpose built (but in sympathetic style) and at the bottom of one of those glorious aforementioned runs.

To finish cross-posting Fraser's coverage of Flaine/Grand Massif, here's his overview of the resort:

Weather to ski - Our blog: Is Flaine one of the most underrated ski resorts in France?

With extensive varied slopes, a snowy micro-climate, short transfers and ski-to-the-door lodgings - Flaine is perhaps one of the most underrated ski resorts in France...