Tony Crocker":lwi1iwjx said:
Hockey is not a cheap sport either.
Click to expand...

Correct, but less expensive than skiing back then and even if it wasn't actually the case, that was the widespread perception. When I moved to Boulder in the early 80s and friends would go on weekend or holiday ski trips, I naturally assumed that it was beyond my pay grade and never considered going along.

jamesdeluxe":1s1negyj said:
When I moved to Boulder in the early 80s and friends would go on weekend or holiday ski trips, I naturally assumed that it was beyond my pay grade and never considered going along.
Click to expand...

That reference also mentioned that in the 1970's 44% of skier visits were in the Northeast (now it's under 25%). What that tells me is that skiing was much more a local daytrip/weekend sport then. I know that was true when I started out because the financial commitment as a beginner to try skiing back then was quite modest if you weren't traveling and paying for hotels and restaurants. In those late 1970's seasons the proportion of my skiing that was local SoCal daytrip was 48% and the rest was at Mammoth aside from a couple of days at Tahoe. By contrast the SoCal proportion of my skiing from 2011-2019 was 3%. So no I don't think learning to ski living in Boulder in the early 80's was an expensive proposition. That's where and when Liz first skied while taking a year off during college.

Hey, guess where I am again this week? And where I'll be spending Thanksgiving?

You should post that pic on NY Ski Forum given the GP/Trax contingent there. Did you get a nonstop to Syracuse this time?

jamesdeluxe said:
You should post that pic on NY Ski Forum given the GP/Trax contingent there
Click to expand...

Possible, but realistically there was very, very few in Trax that night. They did have a wedding reception and some other 2nd large party going on so overall a busy night for Greek Peak.


jamesdeluxe said:
Did you get a nonstop to Syracuse this time?
Click to expand...

Both ways this time for my first combined out and back flight this year that was without any issues to deal with. I even got promoted to first class for the first time in a very long while given the fewer people that travel this time of year. Unfortunately in a couple weeks only the TO direction is on the direct flight...

Totally have to keep this thread going despite it no longer being summer.

Instead I can show how to NOT make early season snowmaking decisions!!

I spent Thanksgiving week back east and Greek Peak could totally have been opened by Friday or at least Saturday except that it's Greek Peak. The new-ish owner has spent quite a bit of money over recent years getting the snowmaking system out of the dark ages, but still either not quite there yet or far more likely operational incompetence (there is someone with the last name of Kryger still running things).

I showed up to 50F rain and this on the hill. Apparently a test run of the system a couple of days earlier on one random not-quite-really-cold night. Totally fine operationally speaking. 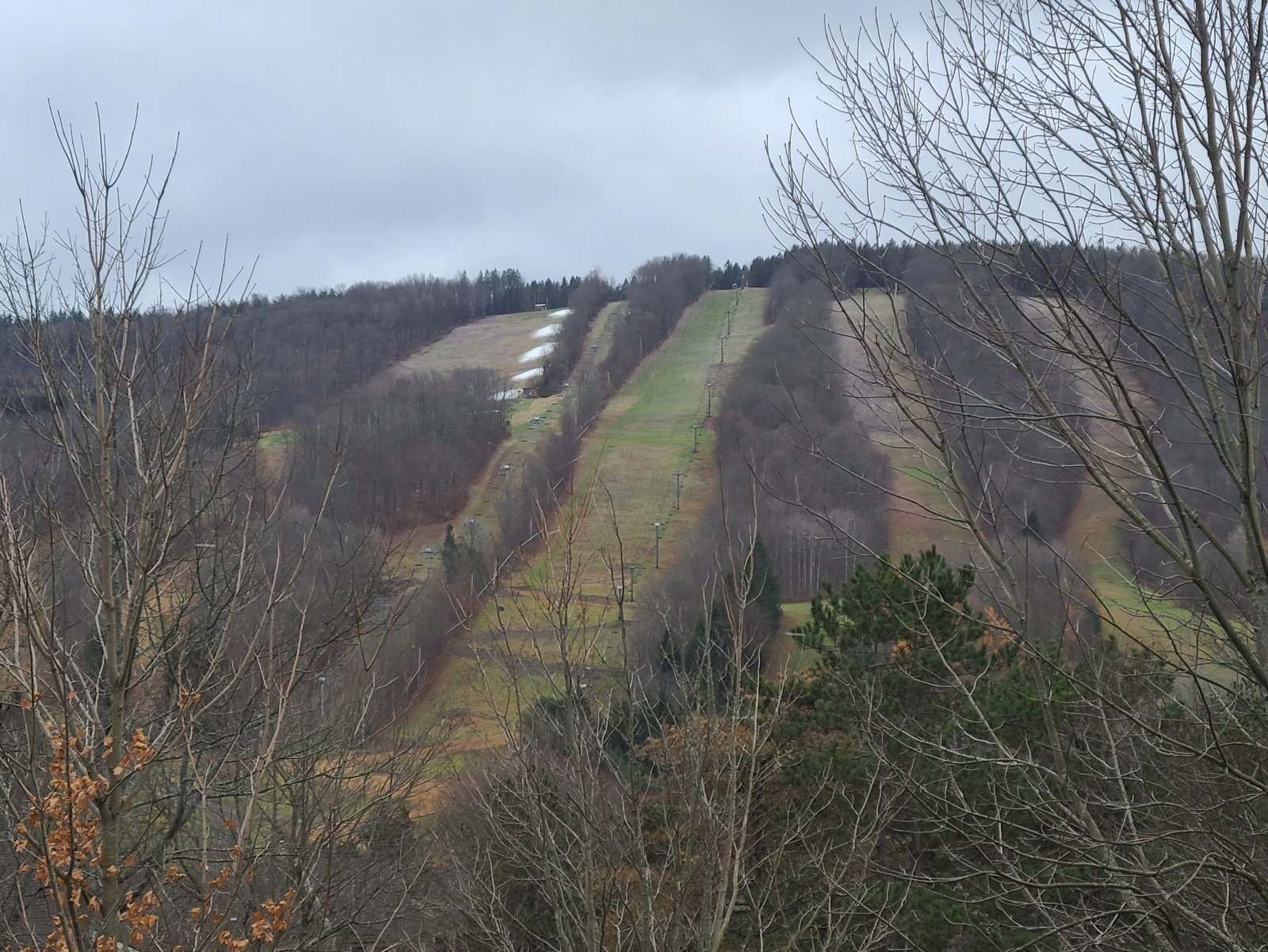 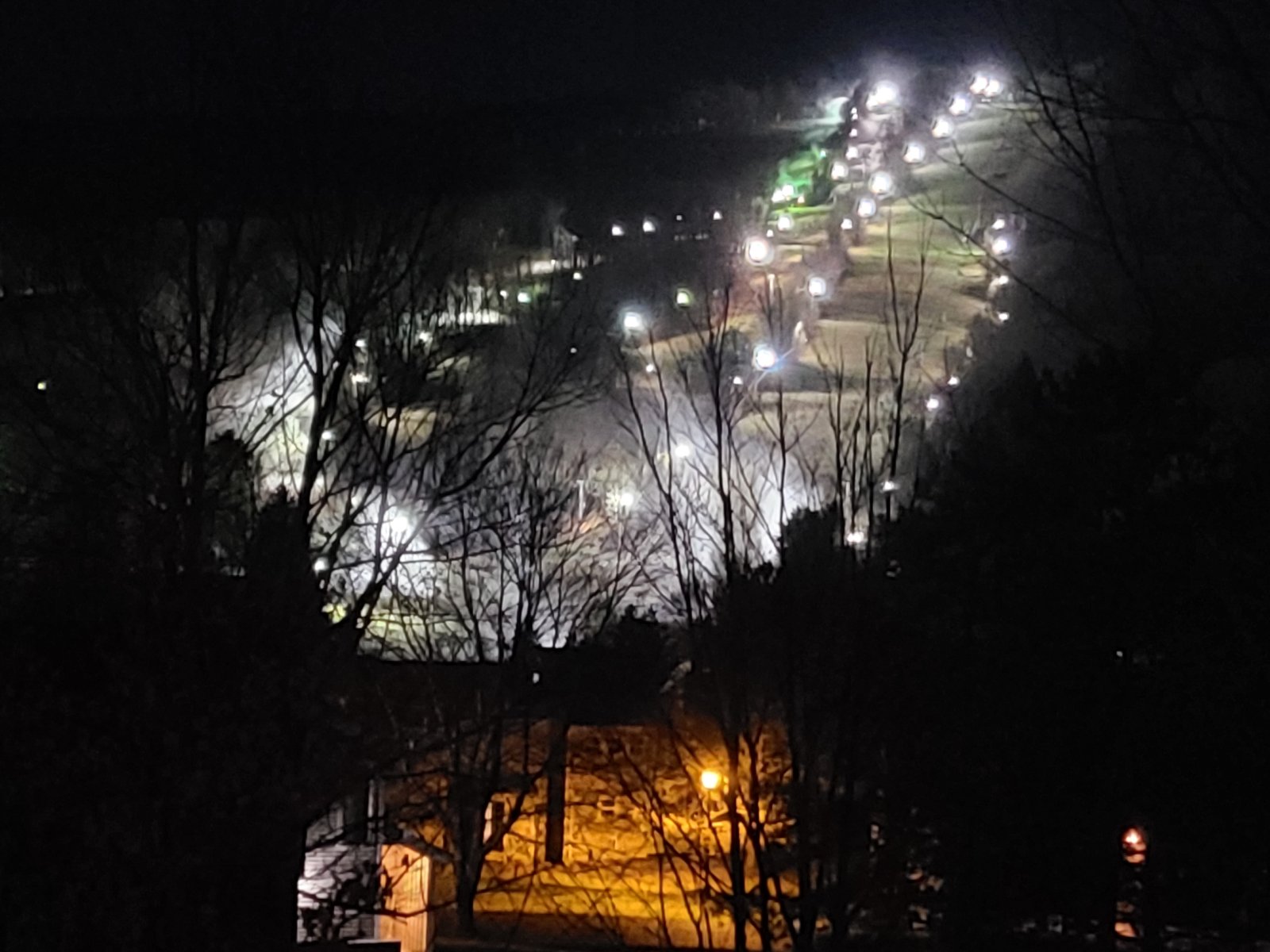 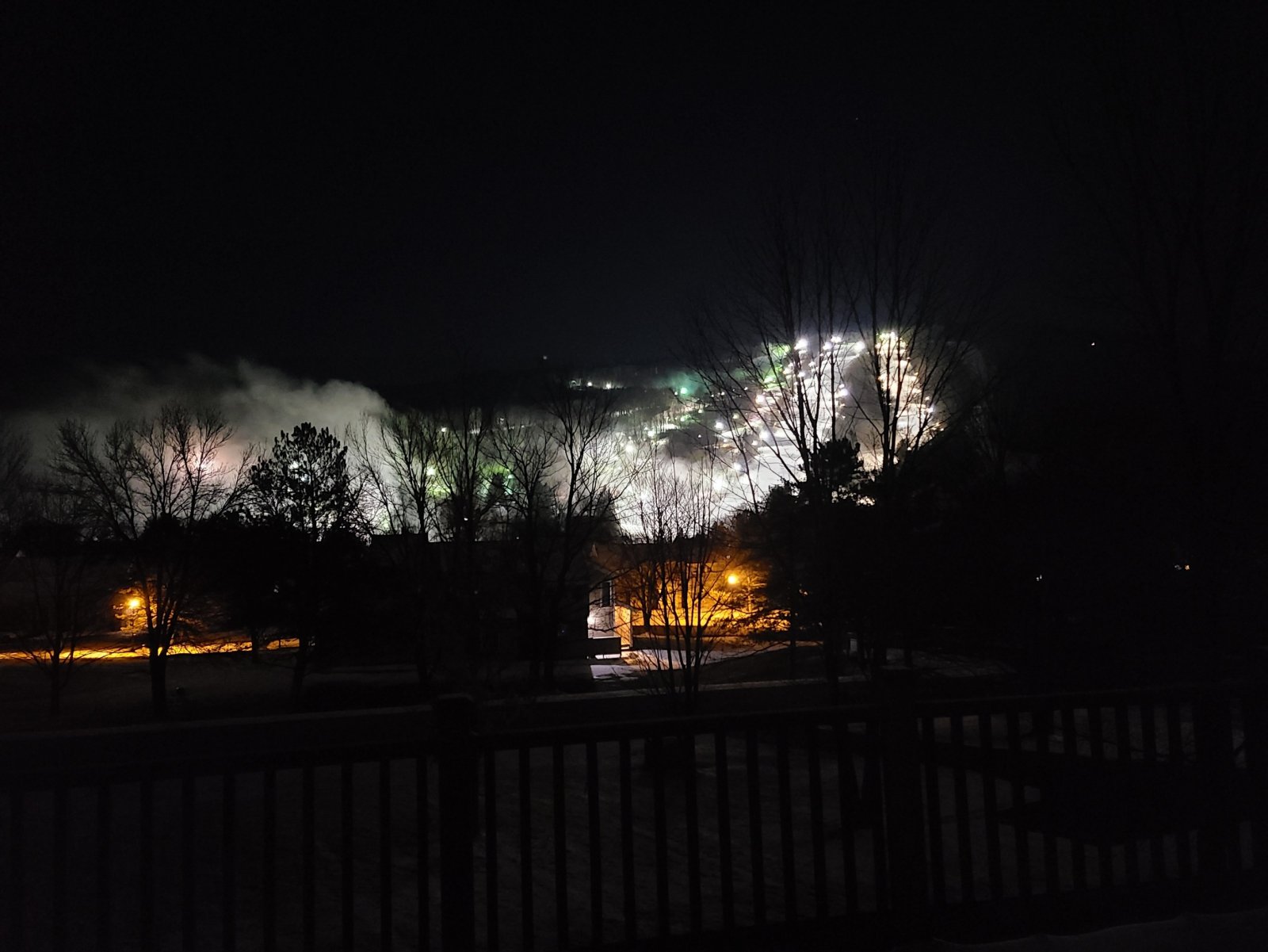 On every trail they left a couple of large gaps. Many snow piles were plenty high enough to be groomed out and open their own section of the trail, but not enough to be pushed around to cover the missing 100 foot gaps. 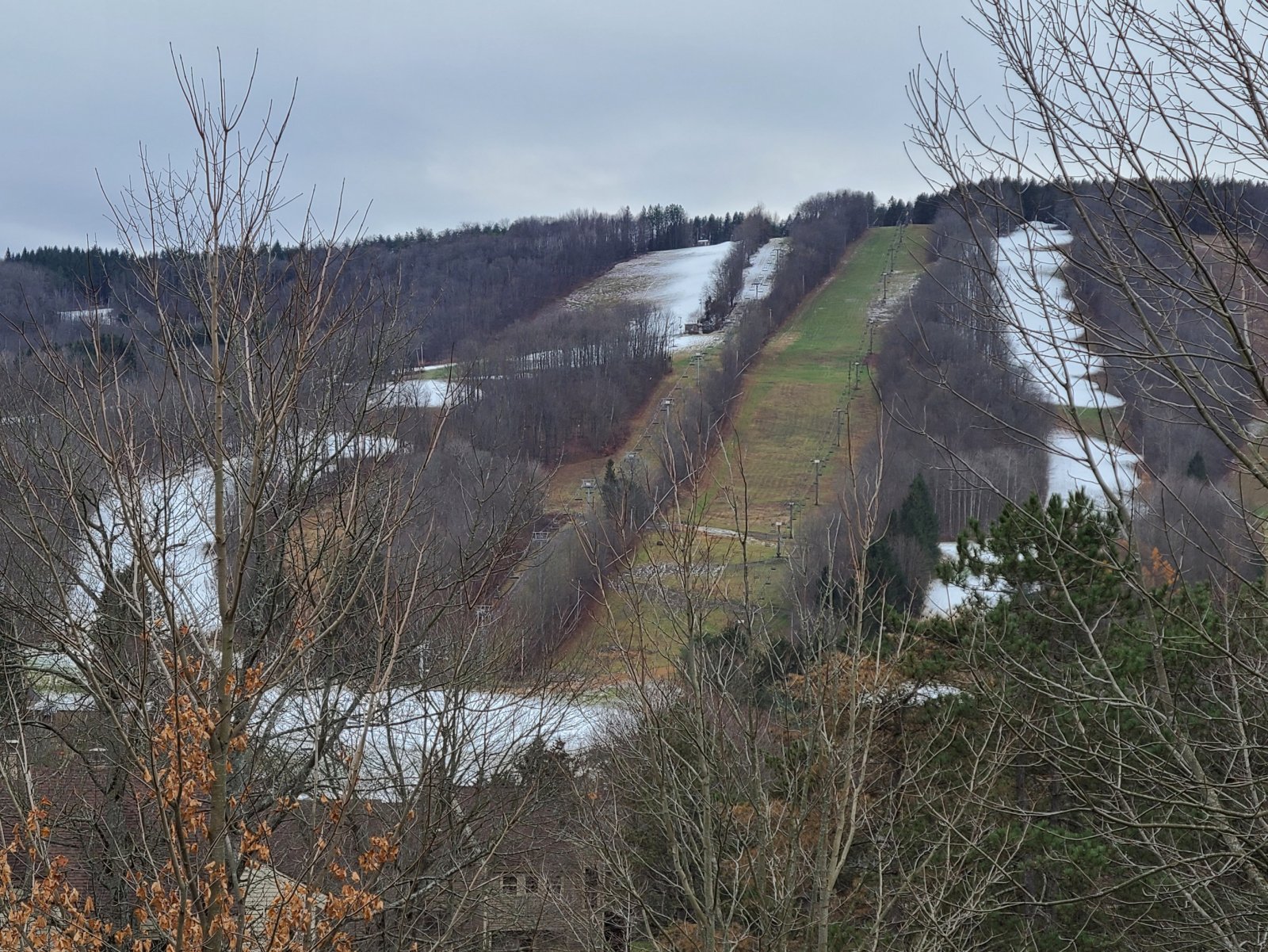 So instead of concentrating the firepower on ONE trail they have three almost, but definitively not ready trails. It's hard to make money when you are NOT open. And while people will complain about not enough being open, they will secretly be super happy that you are at least open. It almost felt like they had pre-set Dec 3 as the target opening months ago and they just weren't interested in even trying to beat that date. Kind of just dawdling with the effort since they had pre-set ideas of not opening. Instead they totally could have been one of only a couple ski areas in the entire state of NY that was open. And would have been the only one in Central or Western NY.

So much for buying 20 some odd new-to-them used snowguns from Killington this summer... Gear is important, but so is operations. 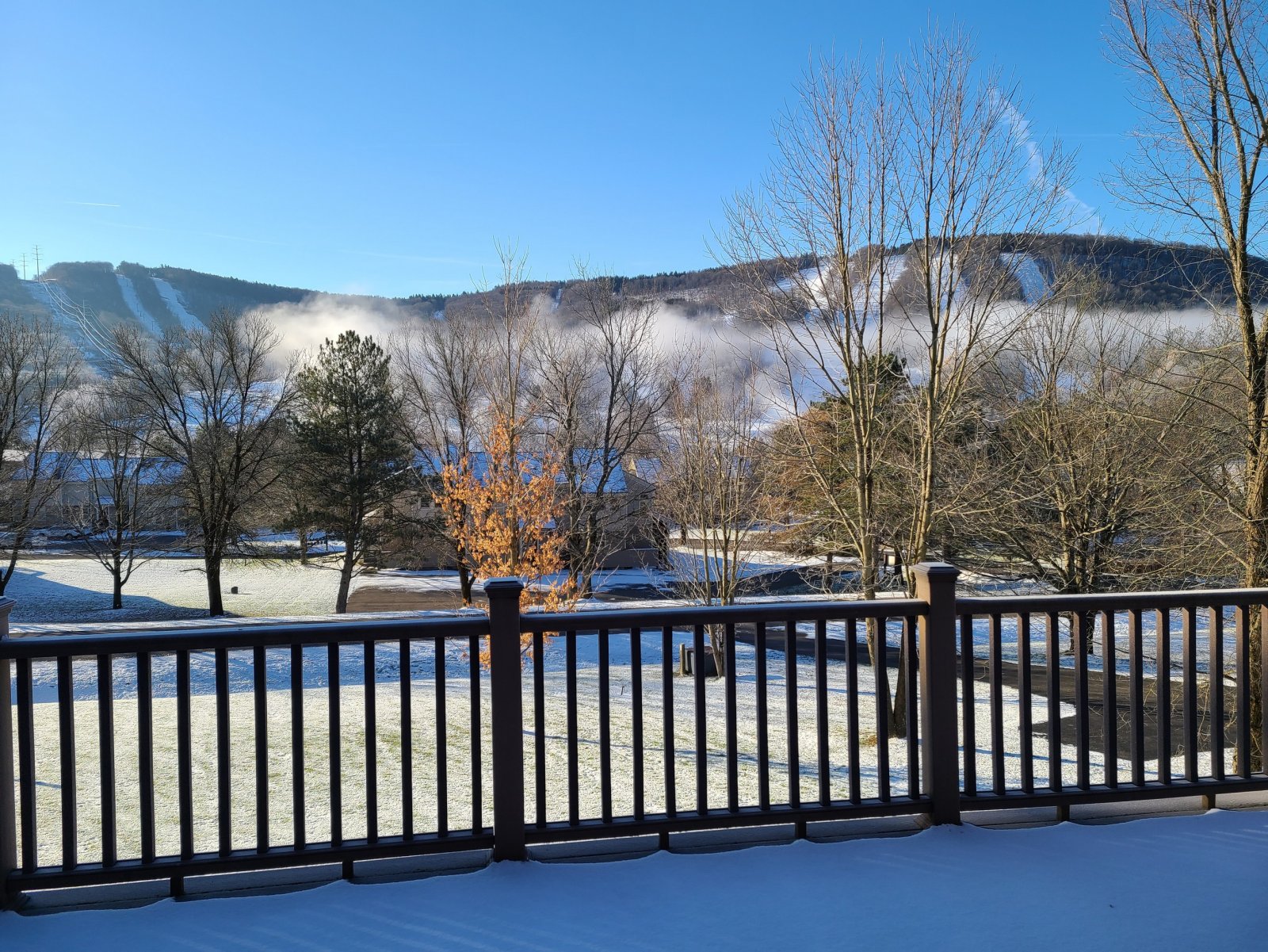 I cross-posted EMSC's latest rant on NY Ski Forum -- let's see what the GP faithful have to say.