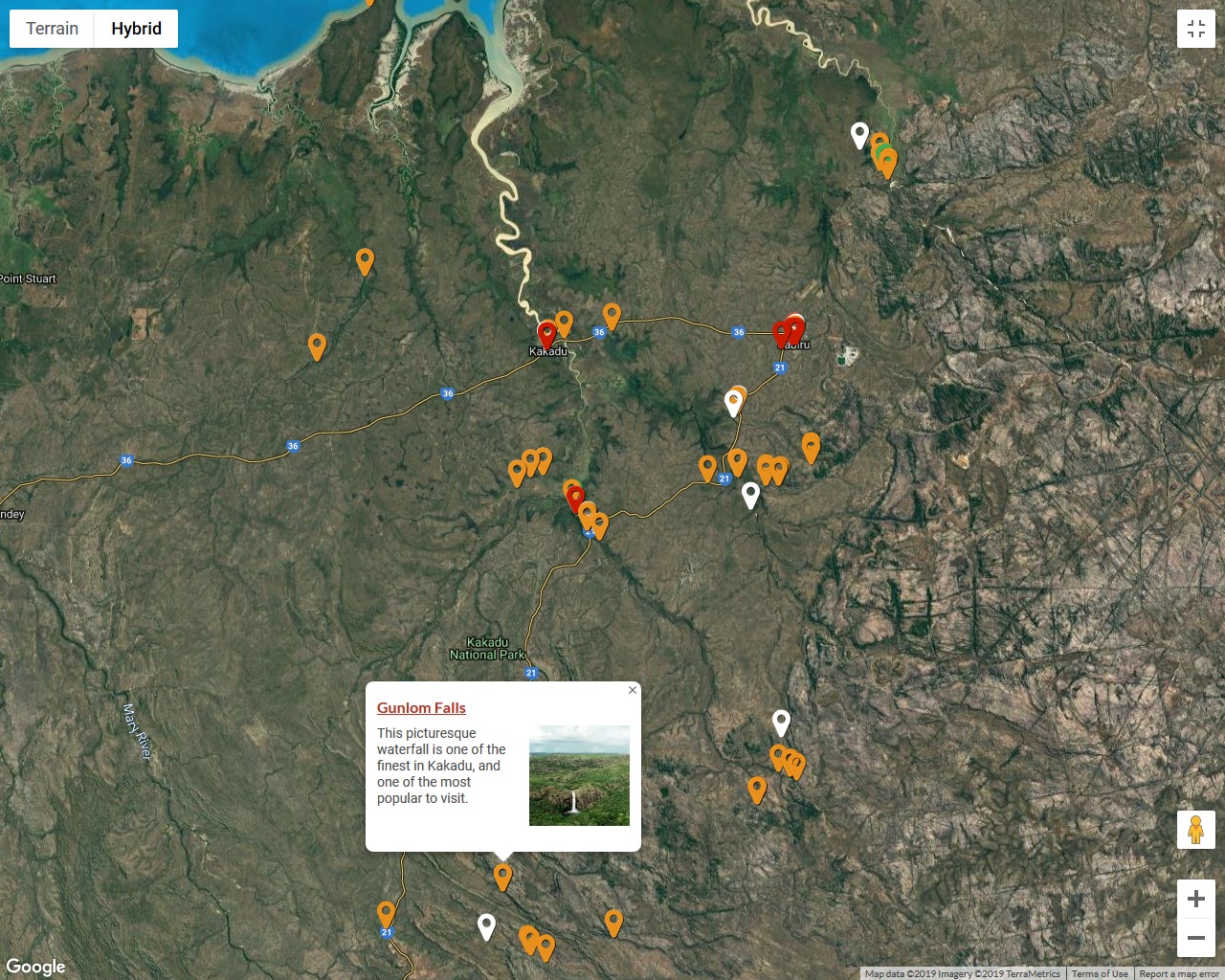 The red pins are lodging bases, with the largest one being a Jabiru on the right side at the main road intersection. We stayed at Cooinda to the southwest. On July 20 we toured the areas from Cooinda past Jabiru to the pins farthest northeast, which are near the East Alligator River boundary of the park.

Arnhem Land is the aboriginal reserve on the far side of the East Alligator river. We signed up for guided tour July 20, only to find when we met the bus at Jabiru that the Arnhem Land Art Center was closed Sundays. We changed our tour date to Monday and decided to check out Gunlom Falls Sunday.

Southwest of Jabiru we spotted two dingoes traveling with what looked like a rogue dog between them. Dingoes remind us some of the ubiquitous coyotes we have at home. Dingoes came to Australia ~4,000 years ago when there was a land connection to New Guinea. Supposedly the only pure descendants of those are on Fraser Island which we visited in 2012. Otherwise there has been varied interbreeding with domestic dogs since Europeans arrived.

We stopped for about half an hour at the cultural center near Cooinda. Here are the calendar seasons as seen by the local aborigines. 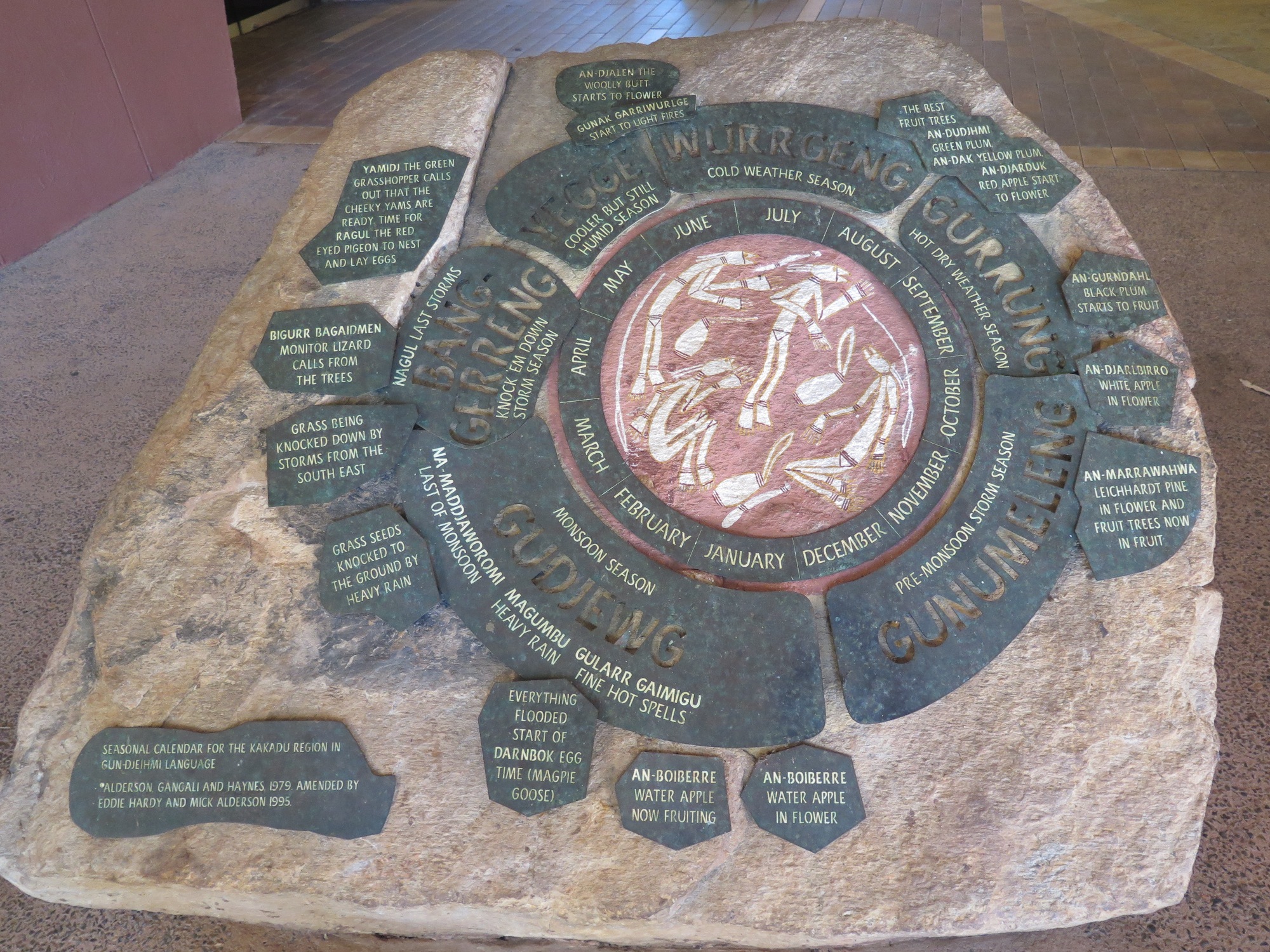 The Gunlom Falls trip consumed most of the day. It's a two hour drive from Jabiru past Cooinda, then an hour on dirt road that was in fairly good condition during the dry season. We arrived just after noon to begin the 1km hike to the top of the falls. 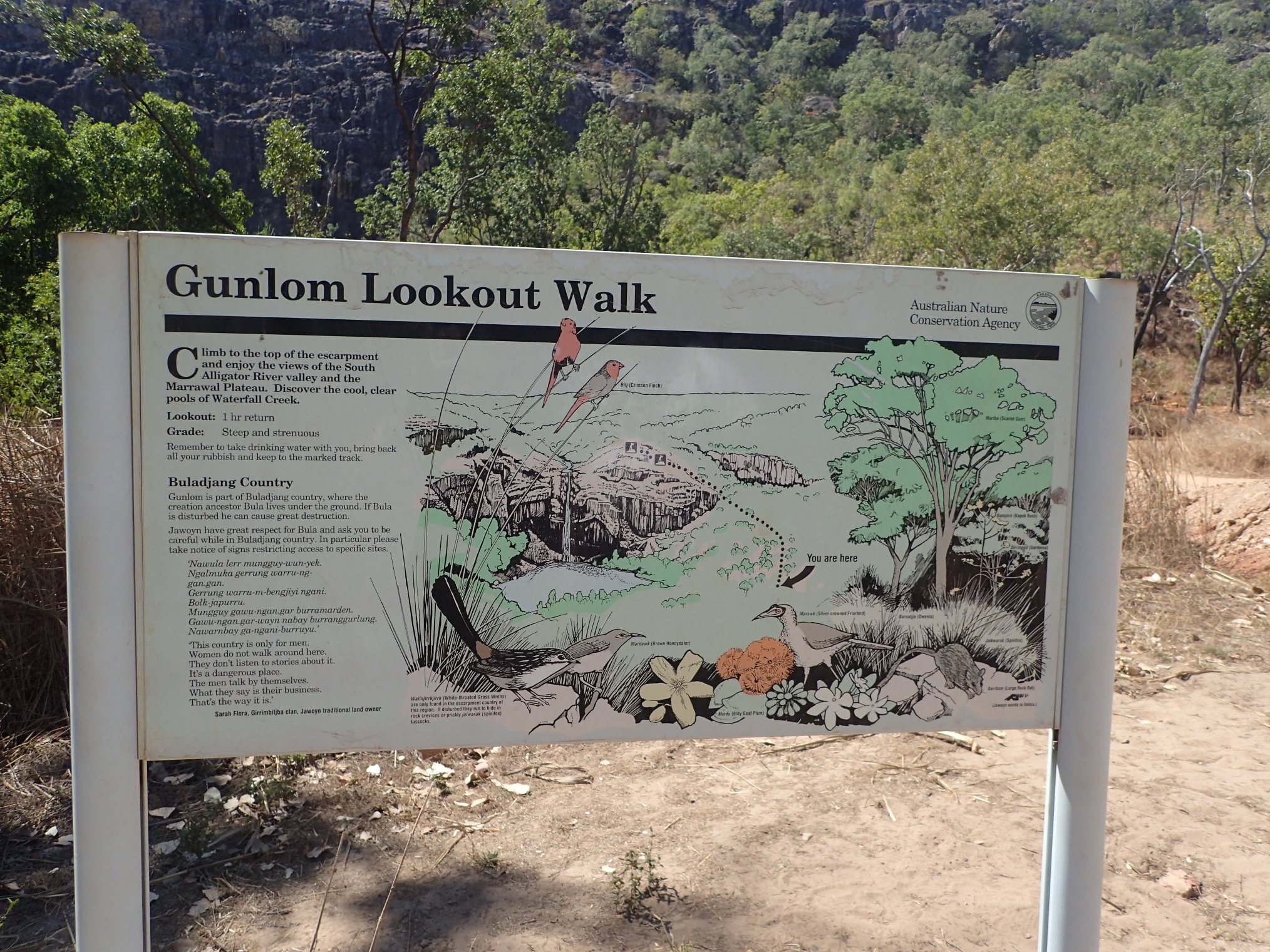 Stairs are under construction for the steepest part. But for now we climb around the construction over boulders. Here's our first view of the upper largest pool. First we descend to the smaller pools closer to the top of Gunlom Falls. 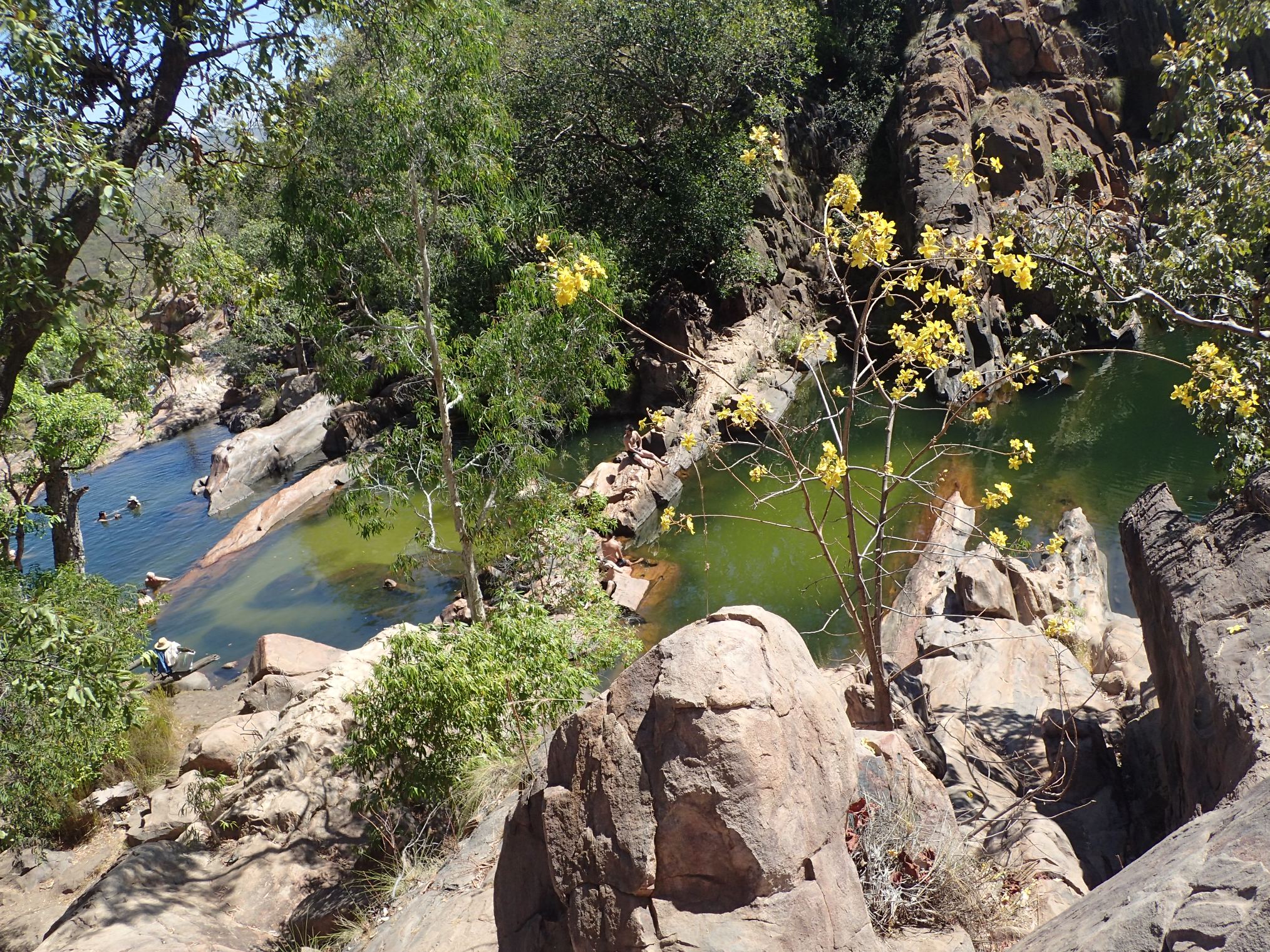 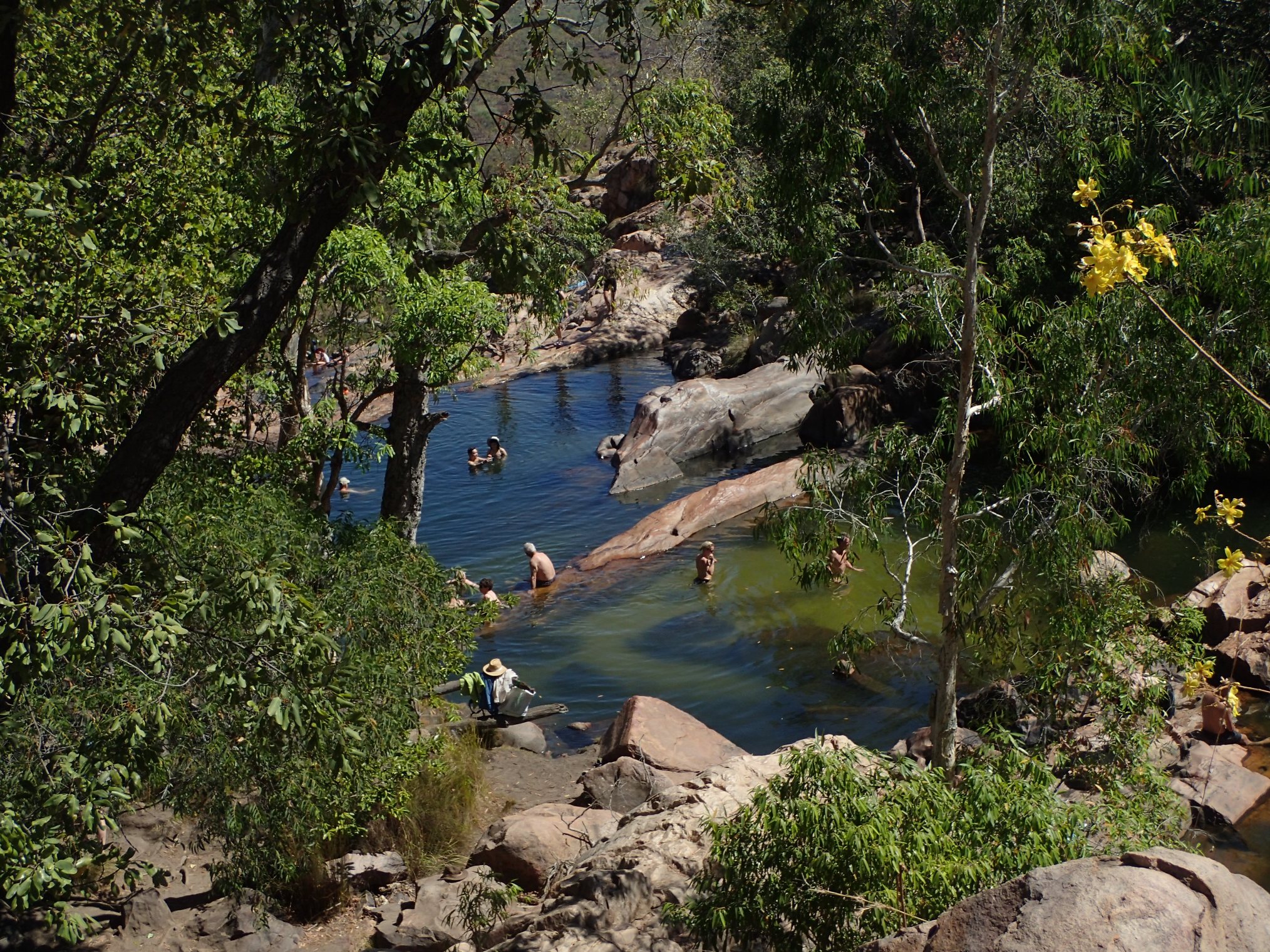 It's cool (?) dry season but still about 90F so we're eager to get in the water. We started with the highest of the small pools. 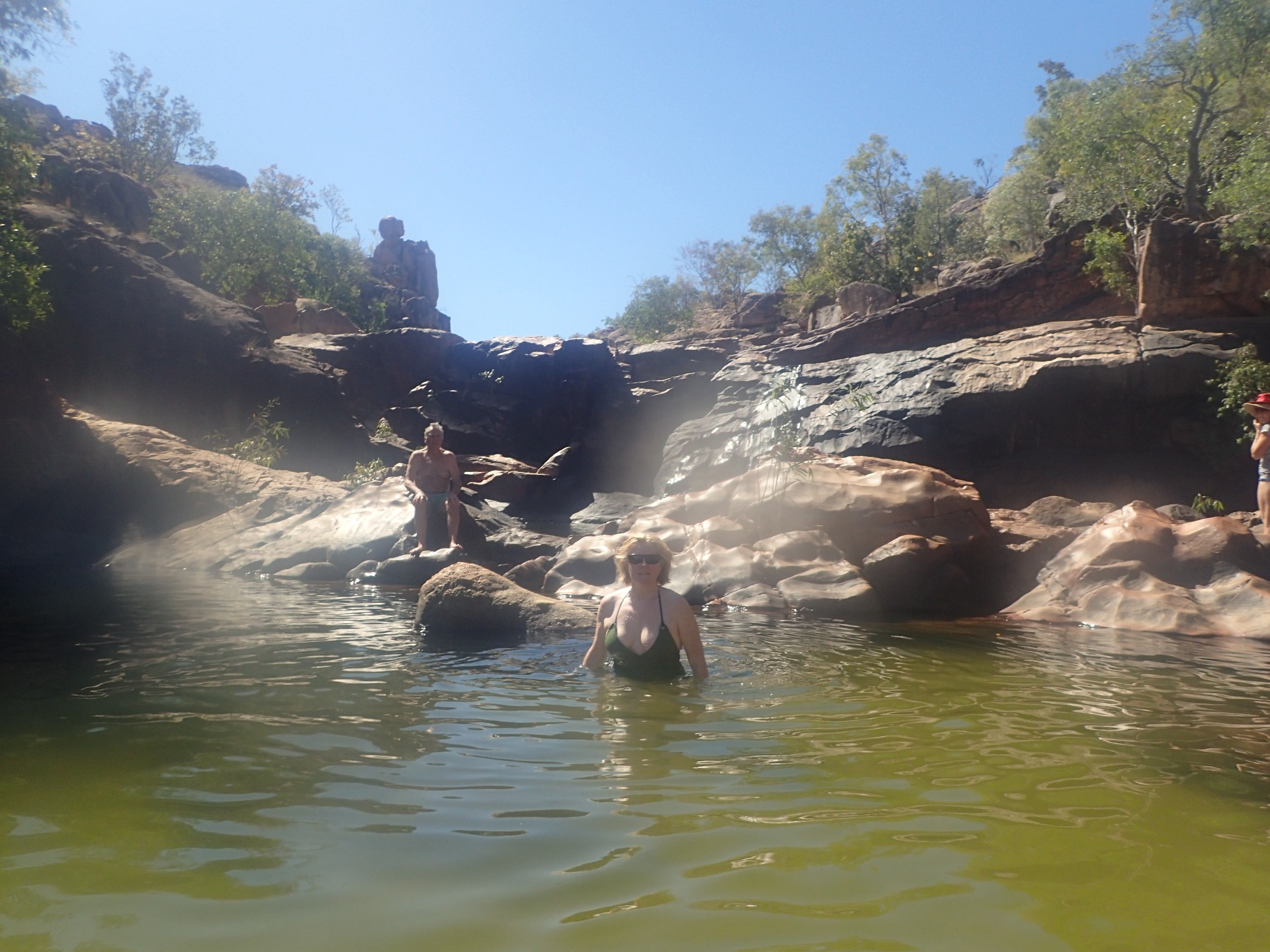 Next I moved to the Infinity Pool. Liz is at the same spot at the edge of the Infinity Pool while I'm lower down. Liz in the pool nearest top of Gunlom Falls. Here's the view over the top of Gunlom Falls to the large pool below at parking level. We climbed back over the rocks to reach the upper pool. This one is bigger and deeper so I jumped in. I swam looker's right in the picture above into a slot with a nice resting spot. Liz on her way to join me there: The pool continues a bit farther. 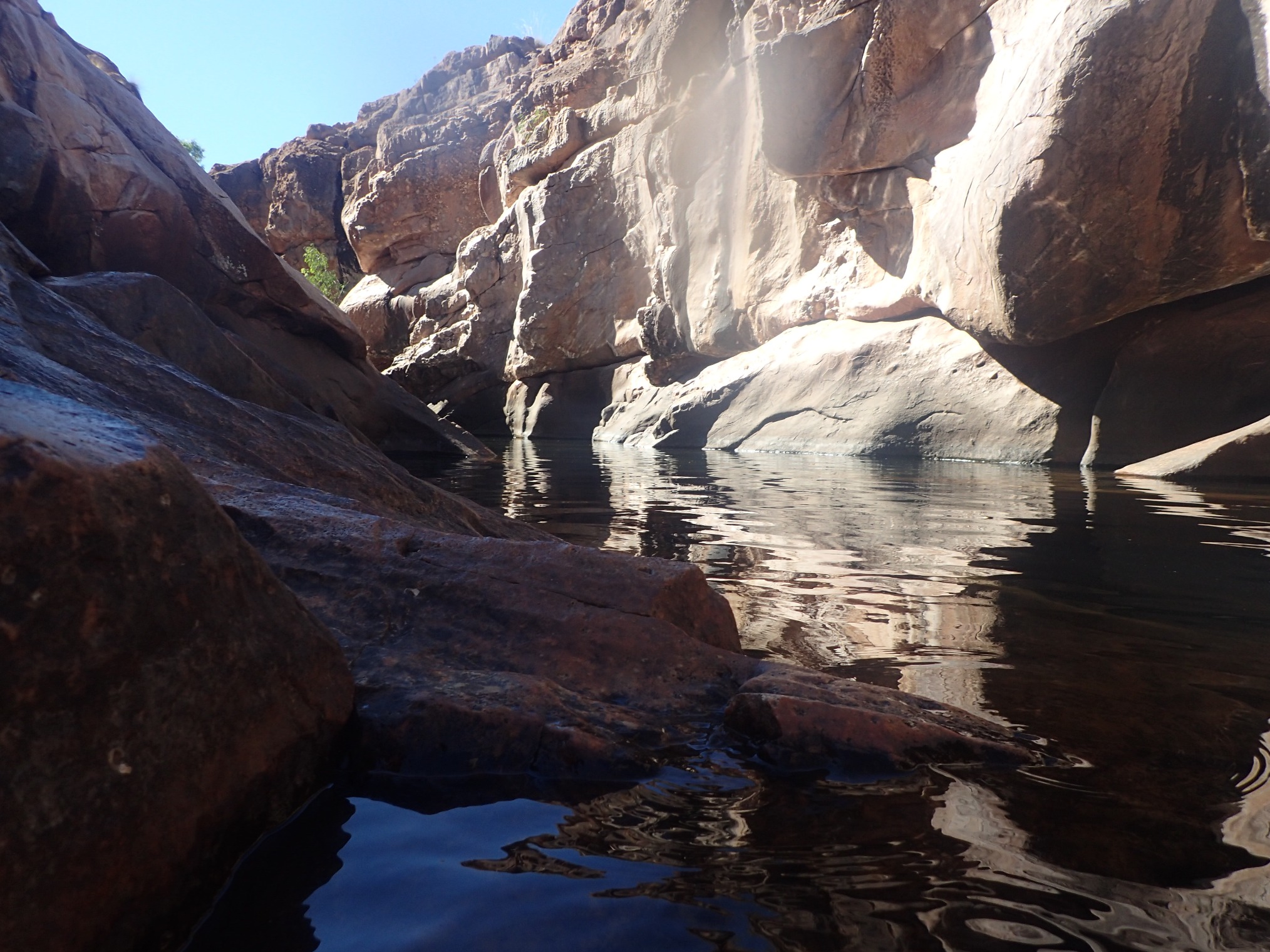 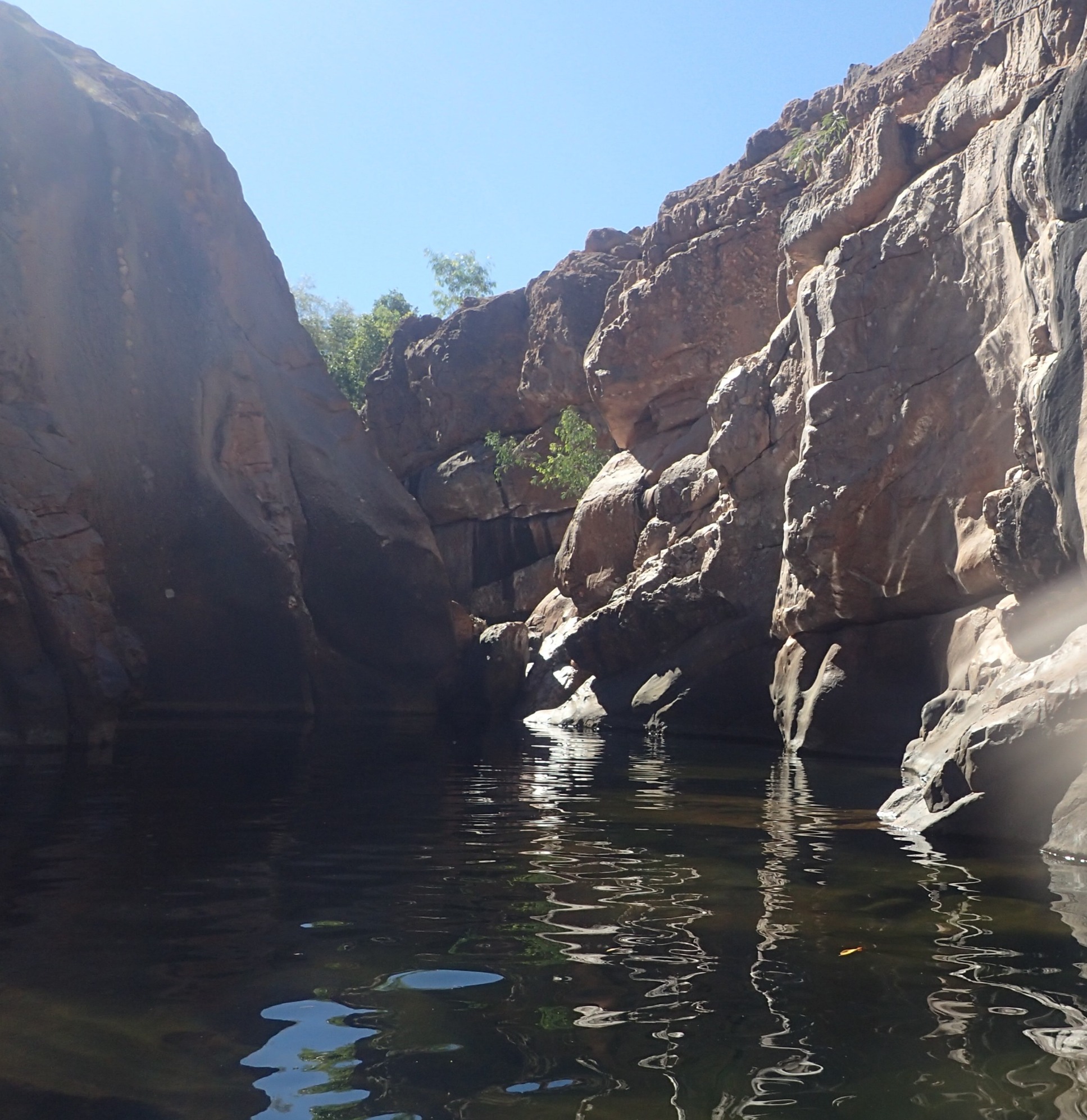 I swam to the end of the picture above. The water beyond was shallow and over boulders with a small waterfall. Unfortunately sun glare obscured further pictures.

Hiking back down we see an overview of the parking and picnic area. We took a quick dip in the big pool below the falls before departing. We saw two water buffalo while driving out the dirt road. These were brought in from Southeast Asia in the 19th century for farming and ranching. In large numbers they are destructive to Kakadu's environment so most were hunted but a few hundred remain.

As noted in other reports we don't see much freshwater swimming spots at home and we were certainly impressed by Gunlom Falls. There were people there, but it's in a remote area of the park so not nearly as busy as the Litchfield swimming holes closer to Darwin.
S

Nice reports Tony. Some good photos too.
For whatever reason my dad isn't a traveller but I'm showing him your reports. He's having a good time vicariously.

Excellent pix of waterholes and pools. That was the final straw for why I moved back east after living in Colorado and New Mexico: not enough proper waterholes.

jamesdeluxe":23edmozb said:
Excellent pix of waterholes and pools. That was the final straw for why I moved back east after living in Colorado and New Mexico: not enough proper waterholes.

jamesdeluxe":n6bnm1i6 said:
Excellent pix of waterholes and pools. That was the final straw for why I moved back east after living in Colorado and New Mexico: not enough proper waterholes.
Click to expand...

I knew I'd smoke you out with that line. Where's that stock pic of people throwing chum in the water for sharks?

Staff member
Liz didn't say you were crazy, but she was curious what eastern waterholes you were talking about, having lived in the East for 30+ years and not recalling much. Being in Manhattan without a car for a good part of that time would have limited her rural excursions though.
You must log in or register to reply here.
Share:
Facebook Twitter Reddit Pinterest Tumblr WhatsApp Email Share Link
Top