Heavenly claimed 15” new Thursday morning (vs. 13” at Kirkwood). I was in line for Gunbarrel chair 15 minutes before scheduled 9 AM opening, about 50 people back. Just before 9, a lift operator announced a 30 minute delay for grooming. WTF!!??? 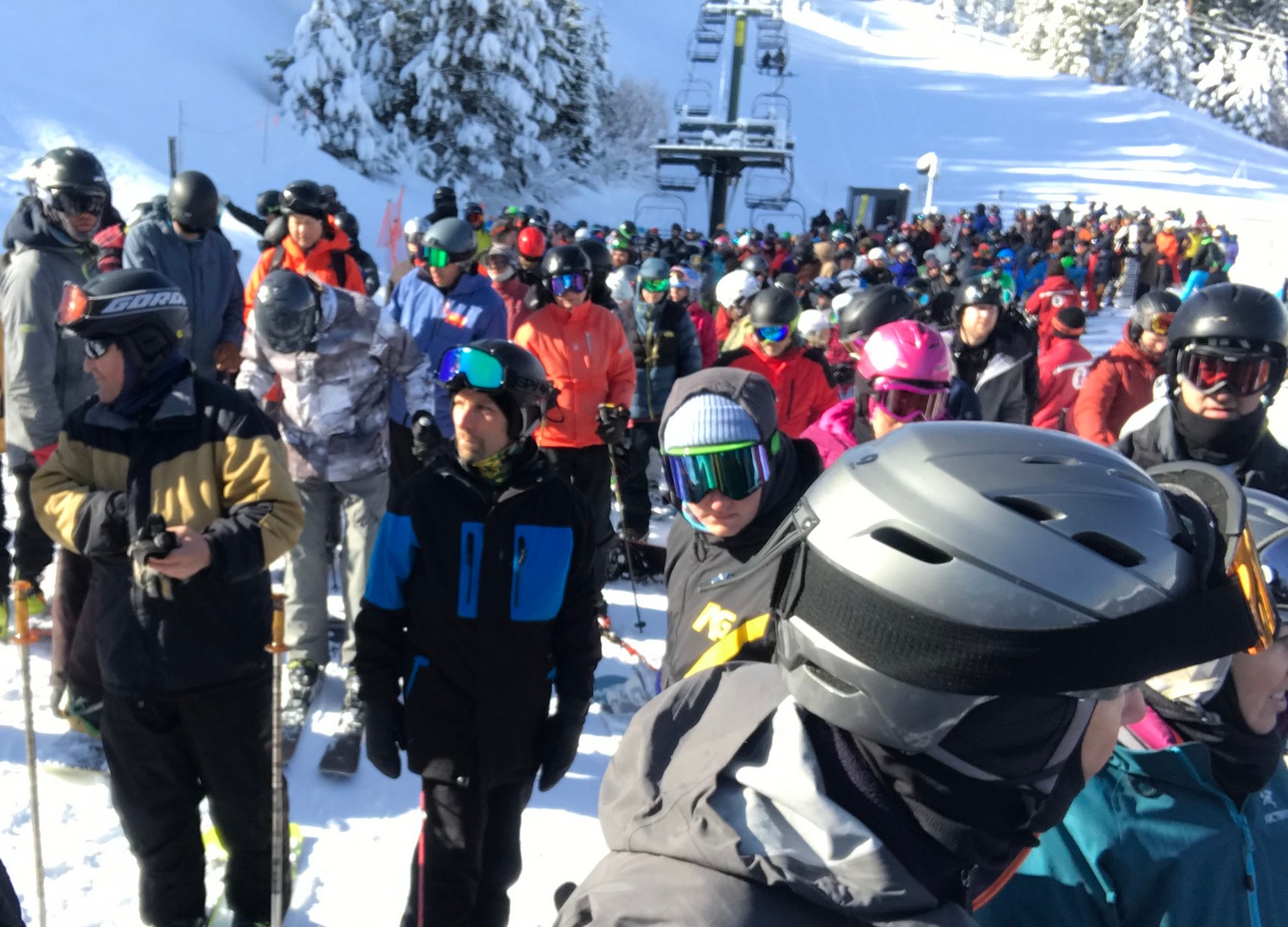 It turned out to be a little less than 20 minutes, but while we waited we watched lift board go green for Stagecoach and Boulder, then Oympic, then Gondola and Tamarack before we loaded. I passed up a Face lap as I was concerned there could still be a line and thought better snow was up high. I skied Sky three times, with my first lap being untracked between the chair and fence next to Ellie’s, then skiers left side of Ellies. I then skied trees to skiers right of Liz’s and Sky Canyon with my final lap being Pinnacles.

The signs at top of Sky and Dipper chairs said Mott and Killibrew gates were open, but after passing up some good powder on Milky Way Bowl, I found Killibrew gates were closed (for the first two times!). So I went into Mott and wrapped around Rocky Point for some steep and deep untracked my first lap, then went further out twice skiing what is probably Lower 40. 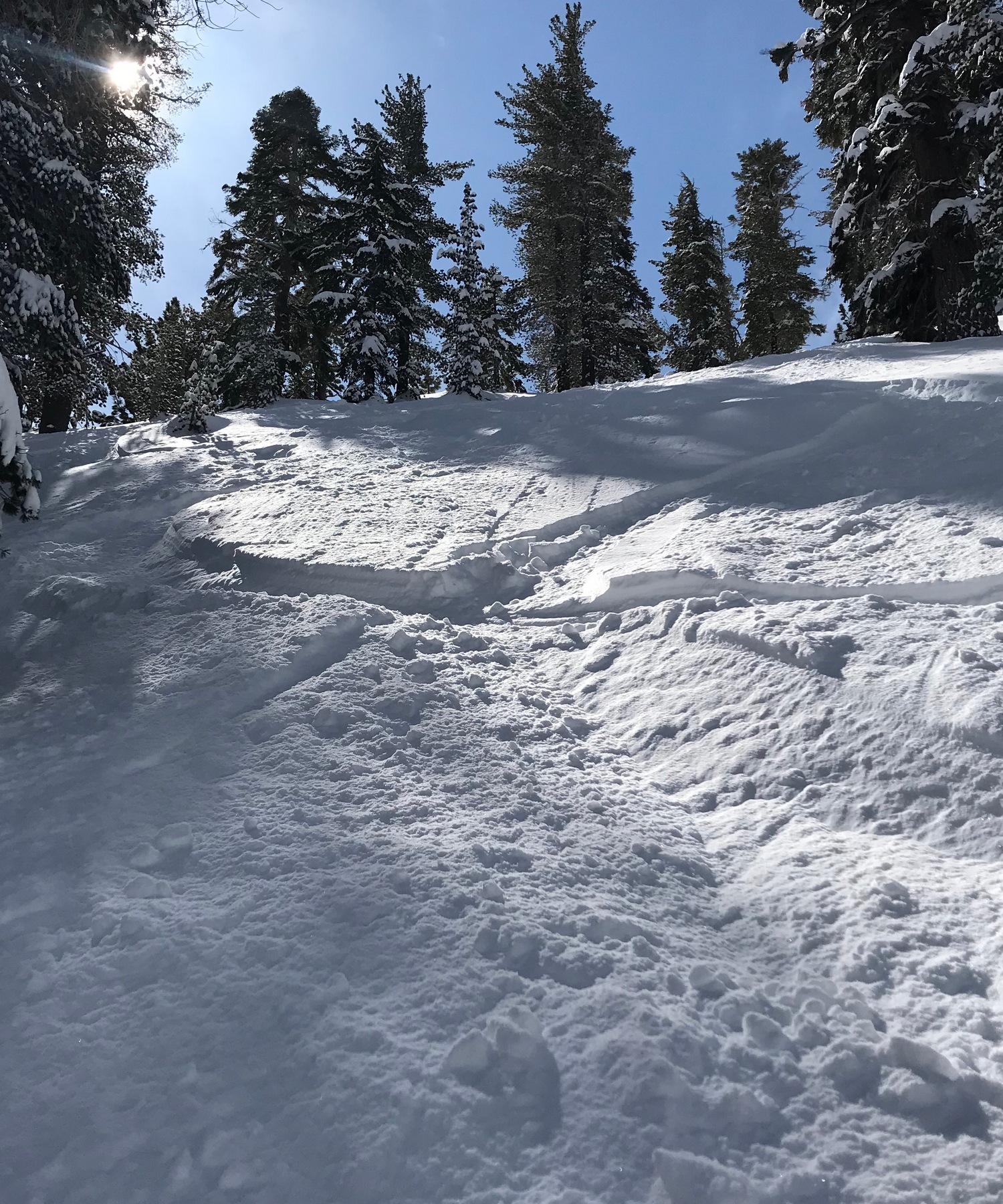 Killibrew finally opened and even though Outer Limits was getting sun-baked I had quite a few faceshots along untracked rope-line. Going through the gate, a guy with a European accent asked something about if this was the way. I saw him lower on the slope and told him not to get too low (which is not easy as there is a rope-line). Then I showed him the untracked, steep and deep Meadows/early Boundary Chutes which we exited high enough to get on good/higher traverse back to lift. Next lap, that included Dipper chair, we started in Outer Limits, but snow had been skied out and baked enough more that we cut across and got into Pipeline from the side after hiking up about 10 feet to avoid a big drop. The top and bottom were very good, especially on the edges, but center in the choke had slid. We were able to cut right at bottom and get further into Boundary Chutes. We started and ended further out and had to suffer the lower Killibrew exit which is flatter and had a couple of short climbs.

From the top of Mott, we skied to Stagecoach base and rode it, then skied a little powder to Olympic. We were going to ski North Bowl trees, but Roget, who was from France, but has lived in Las Vegas for 25 years was ready to ski Firebreak, the 3200’ vertical side-country that ends near Stateline gondola. It was great, very lightly tracked and deep snow in the well-spaced trees, probably 200 powder turns. We’d make 20 turns, stop and laugh at how good it was, then make 20 more and it went on like that for 15-20 minutes. 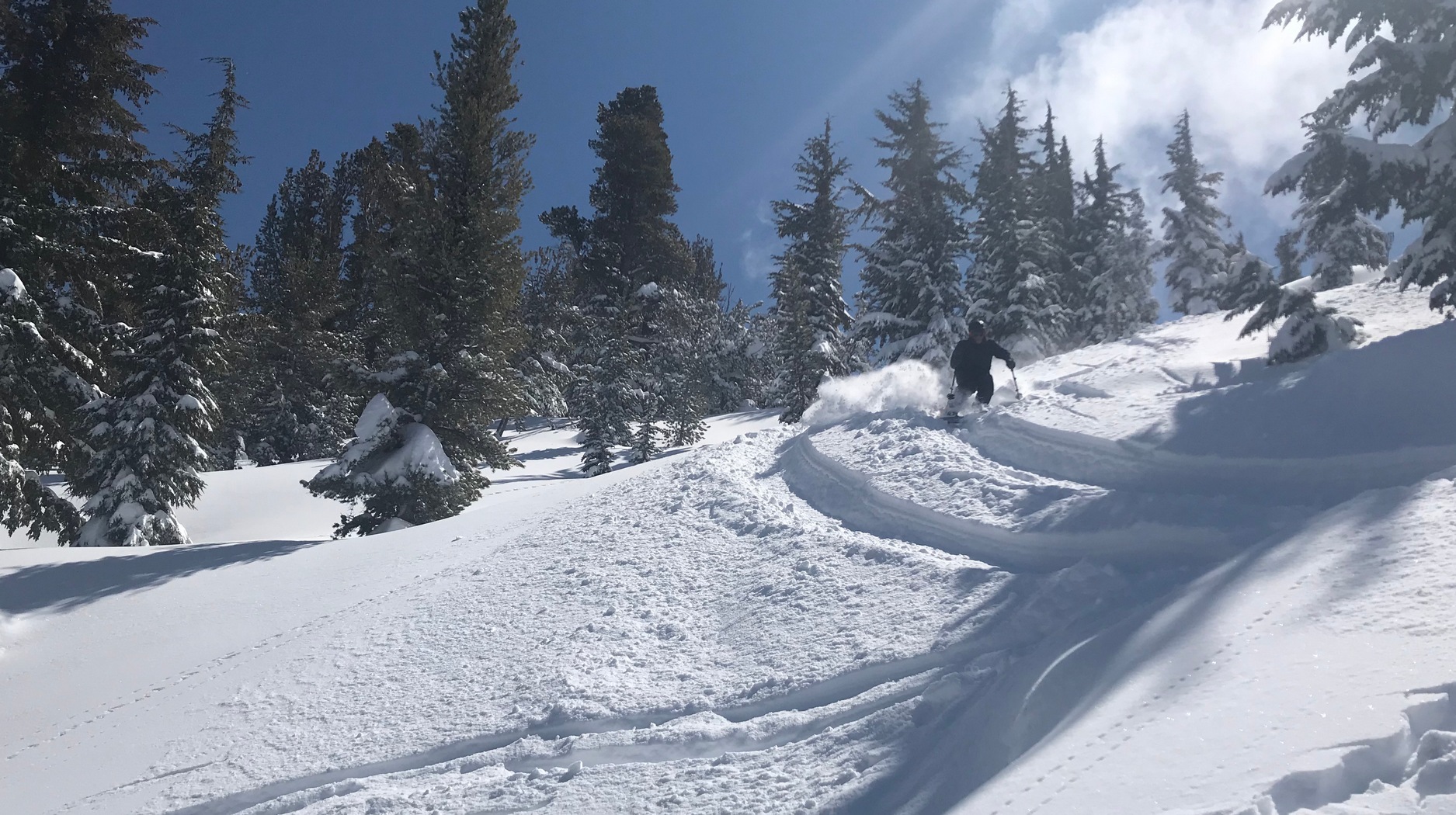 At a cafe at the base, he bought us some cold drinks and himself an apple. Going up the gondola I ate half the sandwich and chips I was carrying and drank a lot of water and juice.

We went up Tamarack and skied to and rode Olympic again. He said his back was not good enough to do more skiing so I did another Firebreak lap on my own, finding more great snow, but pushing it a little too far into NV. Even though I was following some tracks, I was concerned they would put me on the wrong side of the casinos so I crossed a creek on a log then had about a half-mile of slogging to get back to Van Sickle Bi-State Park and catch a barely downhill road back to the main Firebreak exit. 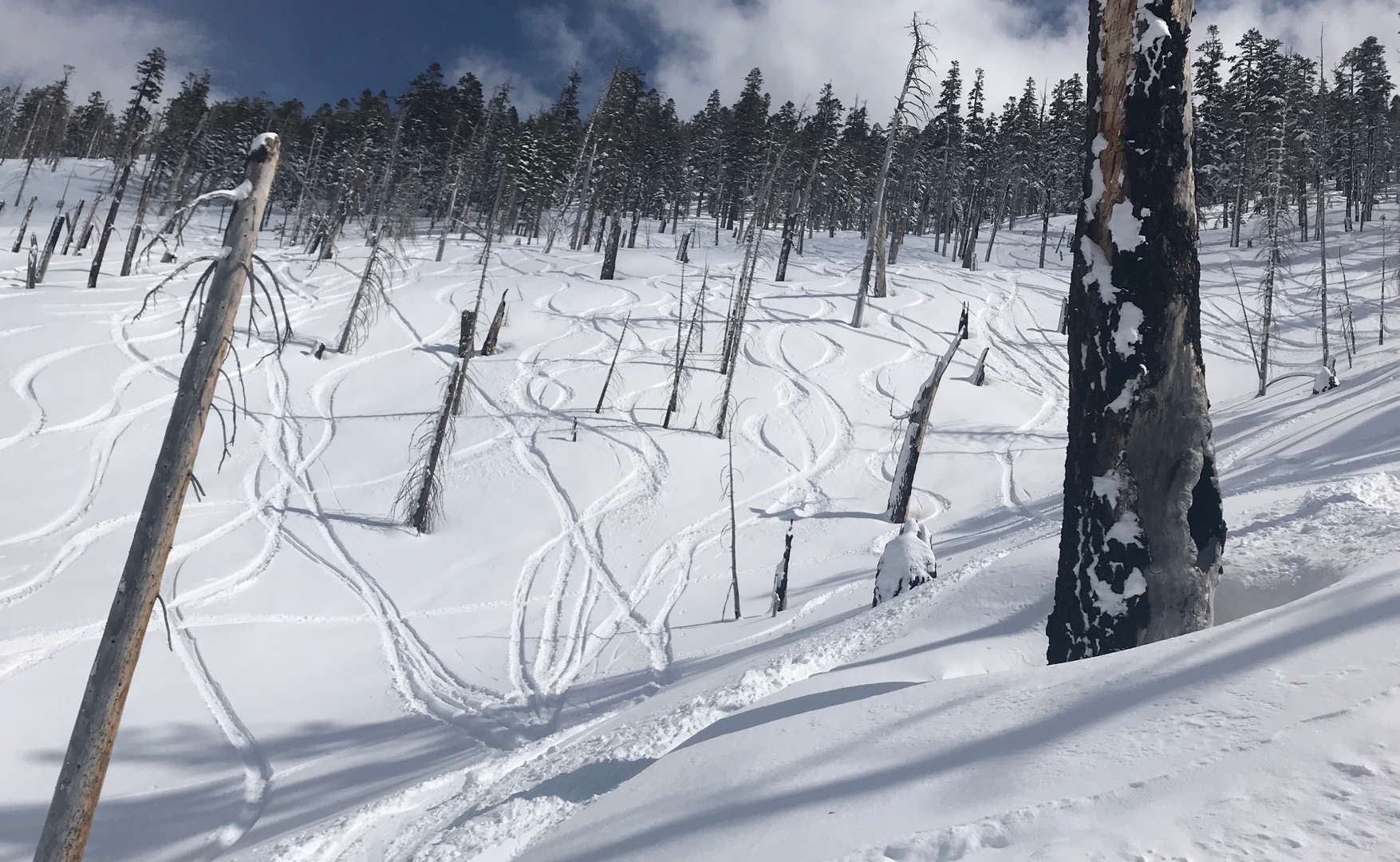 I finished my sandwich and had beer I’d been carrying on gondola ride. At the top, I went into Tamarack Lodge and ate the rest of my chips with some sauted mushrooms, onions and peppers and spicy barbecue sauce from the condiment bar. I was expecting Happy Hour to start at 3:30 with the Heavenly Angels, but instead heard last call from the bar. I went out to ride Tamarack to get back to CA to find it had gone on windhold, even though there were a couple of chairs of employees? downloading. So I had more slogging to get on CA trail. My arms really got a workout.

I was concerned that Sky and Canyon also went on windhold, but finally saw riders on them so I loaded Sky at a couple of minutes to 4. I skied Ridge, but cut across what used to be Bettys before re-joining Ridge where I saw I guy skiing an untracked roped off area under Canyon. Since nobody was coming up chair, I skied the next one. I also found more powder turns getting to Ridge Bowl and above and along the left side of Waterfall. I rode Groove and skied top of Upper Roundabout before carefully picking a path down edge of Hogsback to Roundabout. I cut off Roundabout and skied mostly packed down Pistol which was a workout on my powder skis. I got to my car after 4:30. My watch counted 20 runs and almost 27.6K vertical.

Friday 3/29 was surprisingly nearly as good and there was a lot less competition for powder. It had started snowing late on Thursday. While Heavenly only claimed 2” new, it seemed much deeper in a lot of places and was very dry and filled a lot of tracks from previous day. I was starting my skate towards Gunbarrel chair a little before 9 when a guy asked me where to get ticket as booth at tram (where it looked like more than a tram wait) was closed. I offered to share a Buddy ticket with him. It ended up costing me a 10-15 minute line as only one window was open for Buddy/Ski With A Friend tickets and people at the front took a long time and then we let others who didn’t realize there was a dedicated line and had been in line a long time alternate in. They opened another window, but it was too late to help us. Guy slipped me a $20 for my trouble and still saved $33 by avoiding $154 walk-up.

We rode the three chairs to top and skied Ellie’s then Liz’s and Sky Chute before I exited to NV. I skied Milky Way Bowl and the Y to Mott and repeated Mott going a little farther into the North 40 past Rocky Point. 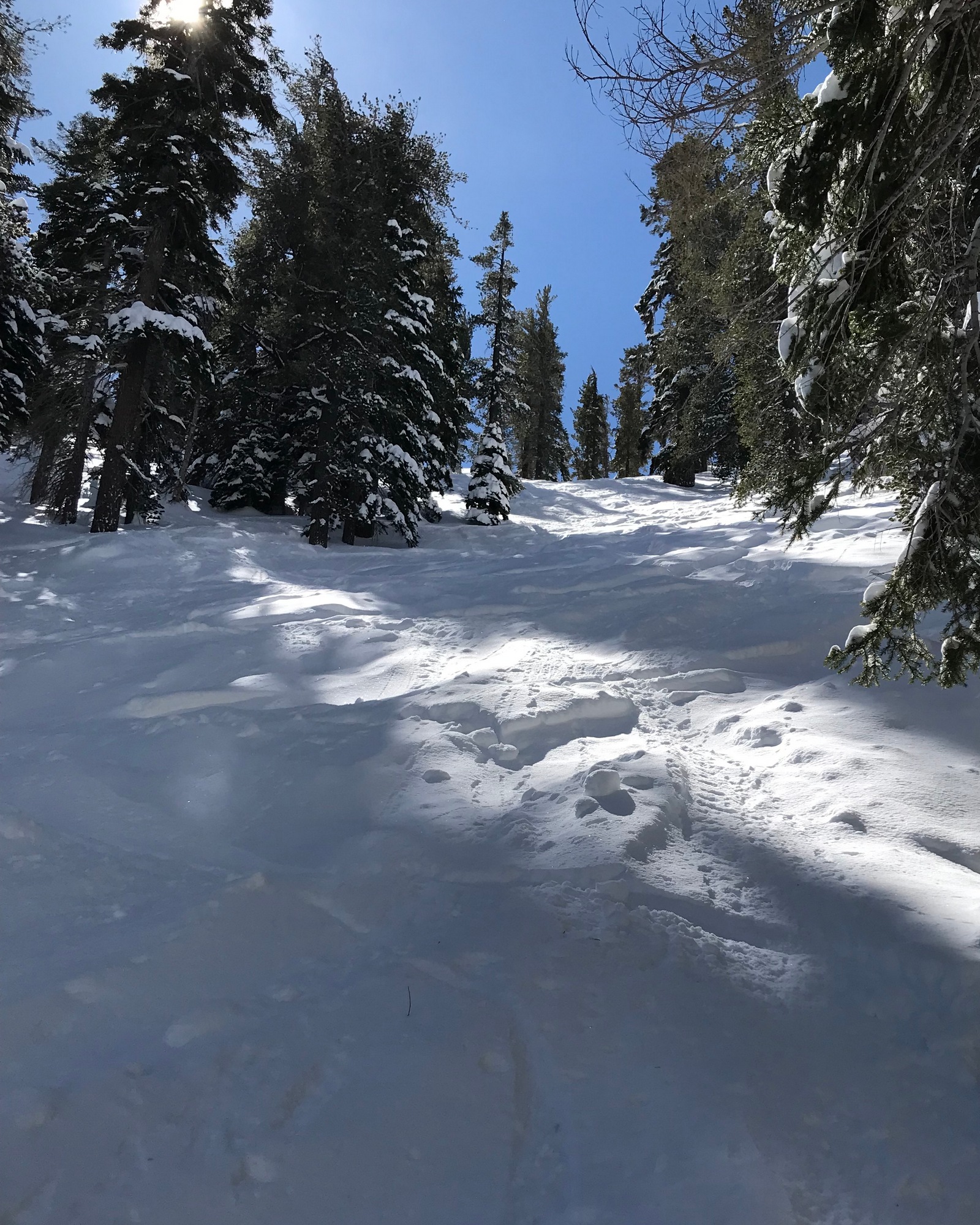 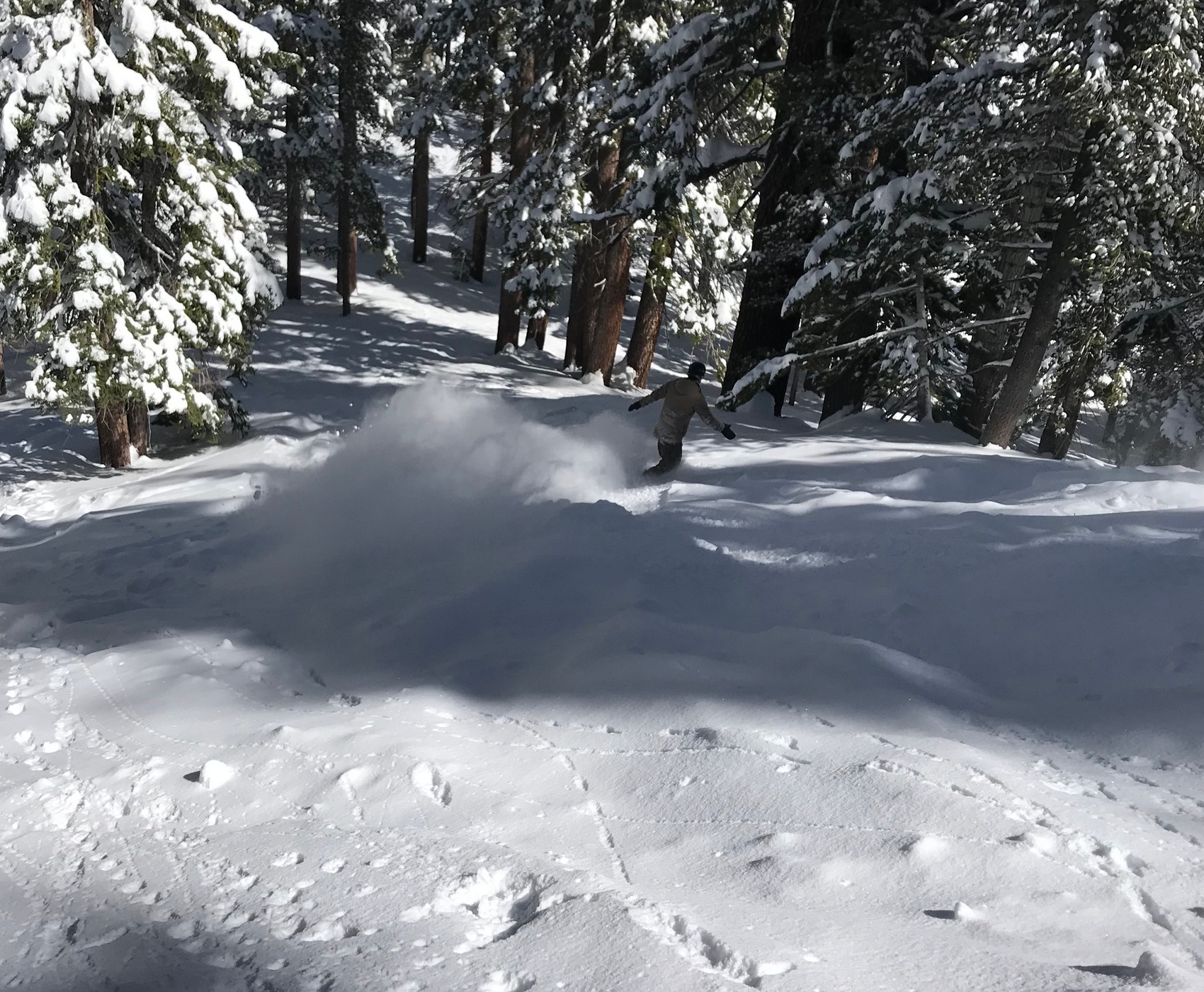 For the day, I also skied Killibrew three times, first taking an ill-advised early run down Under The Gun which had been baked and was mostly re-frozen. I did better in Killibrew later, getting into Pipeline and finding still good snow early enough in Boundary Chutes to get higher Killibrew exit. I took a Gondola run where I went further left at the top to get more N-facing that was very lightly tracked 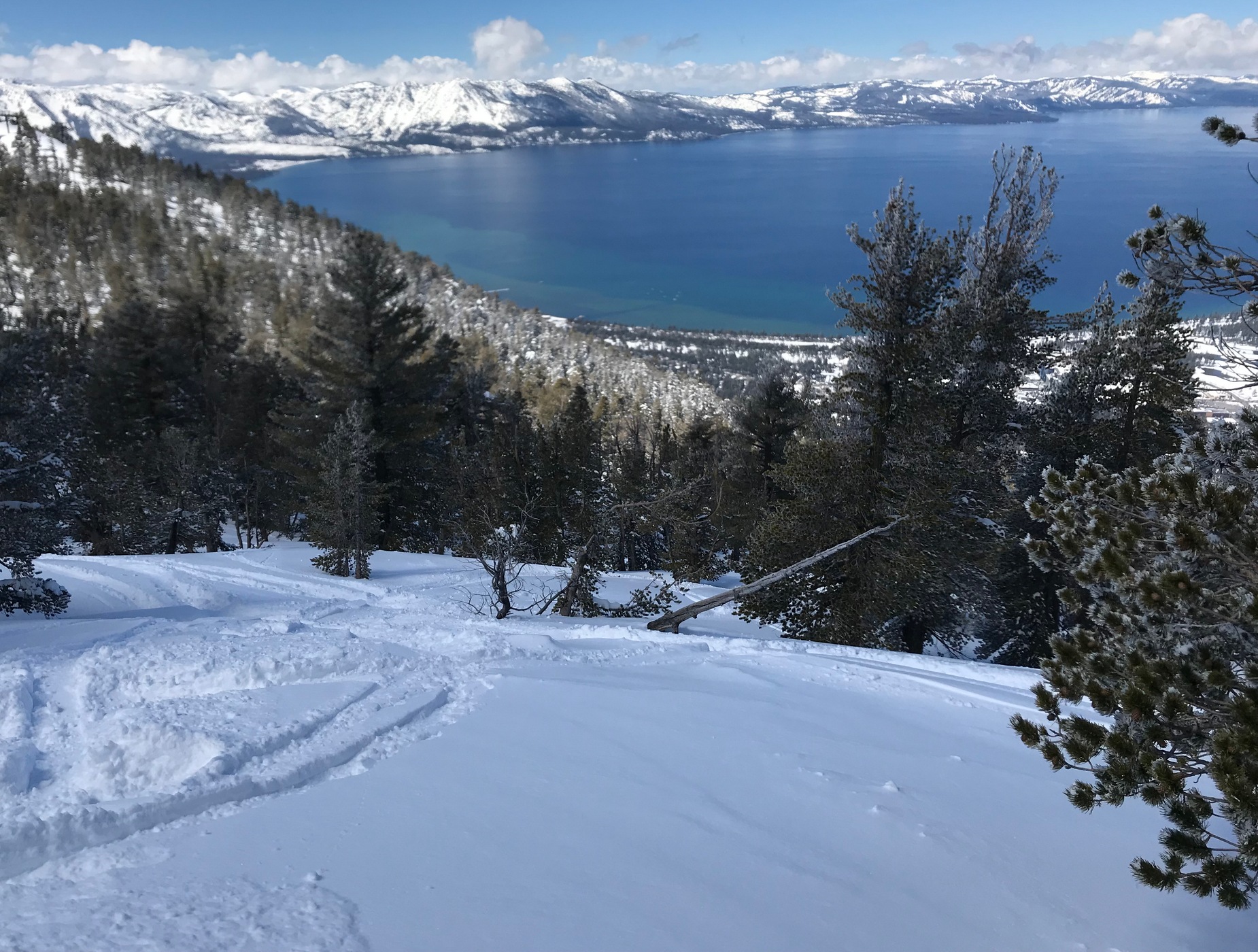 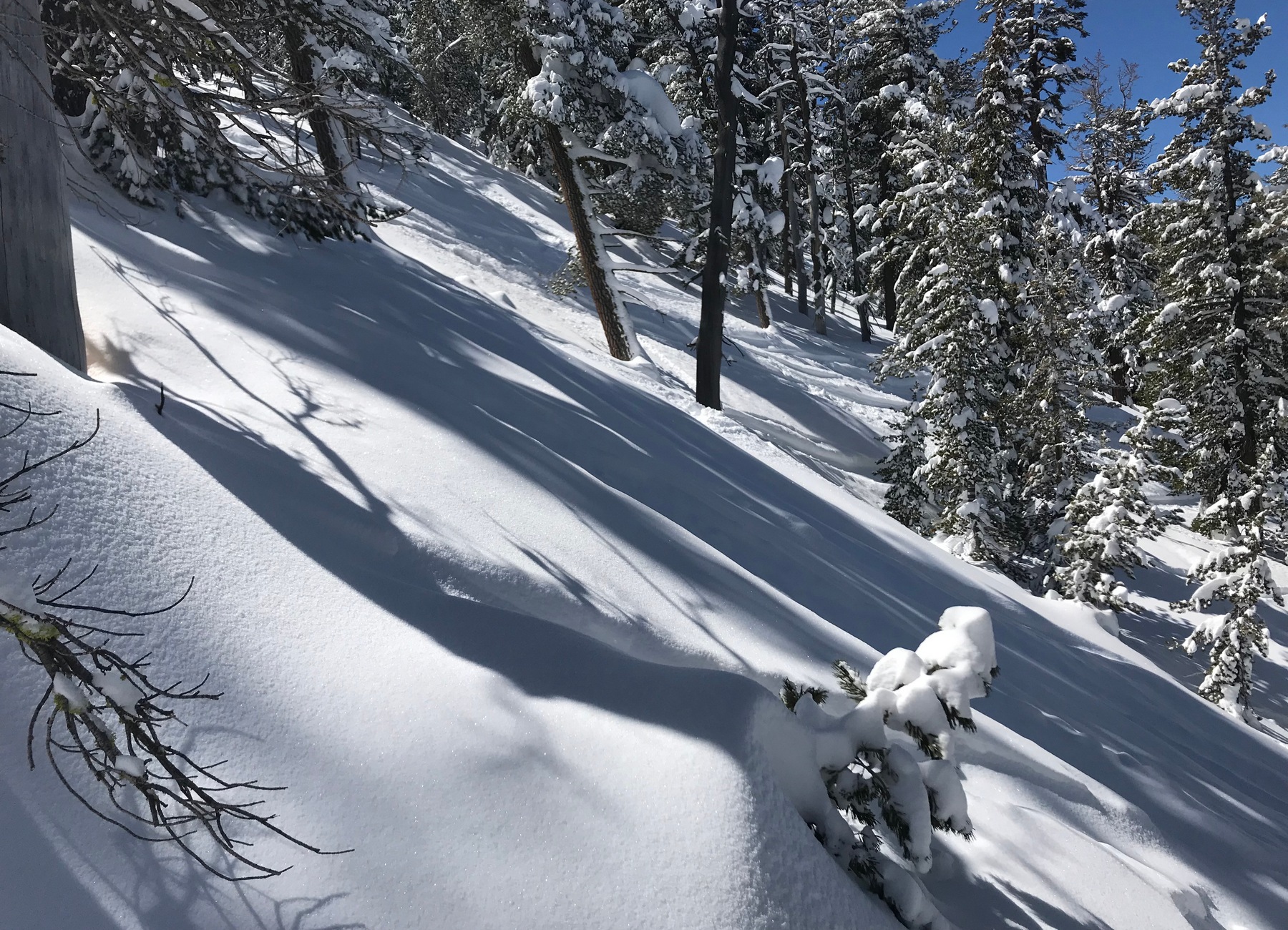 and missed the more open burnt tree face I was looking for and ended up skiing about 800 vertical of the gondola line which included a minute or two uphill. From the top of Mott, I twice did a little slogging to get to Orion, then a short hike to get some untracked on the way to Dipper. Picture was taken at almost noon.View attachment 2After riding gondola, Tamarack and Sky, with about a 15 minute hike I got higher on Monument Peak than ever before. I was probably less than 100 feet from the top and found great deep lightly tracked snow, then nailed top entrance to Stateline chute. I ended my day returning to CA via stunted trees left of California Trail that were too tight with a lot of wind-lips, then a little baked where it opened up, then took Maggies Canyon where there was still room for deep powder turns in shaded Gully. I skied to CA base about 3:30 via mostly ignored mid-entrance to Gunbarrel where there was untracked. The left side on Gunbarrel skied better than the Face which was too chopped up. My watch counted 22.7K. I quit a little early to check-out IPA event outside restaurant near gondola base that was connected to running race the next day. I got some Sierra Nevada swag, but when I asked rep what the deal was on beer, he said what they brought to pour was warm and to order one of their beers at the bar and put it on his tab. I was OK with that.


Running into picture limit so will add a few more in a reply.

A picture of what I skied from hike to just below Monument Peak. Lake and East Peak at top left. Carson Valley at top right. 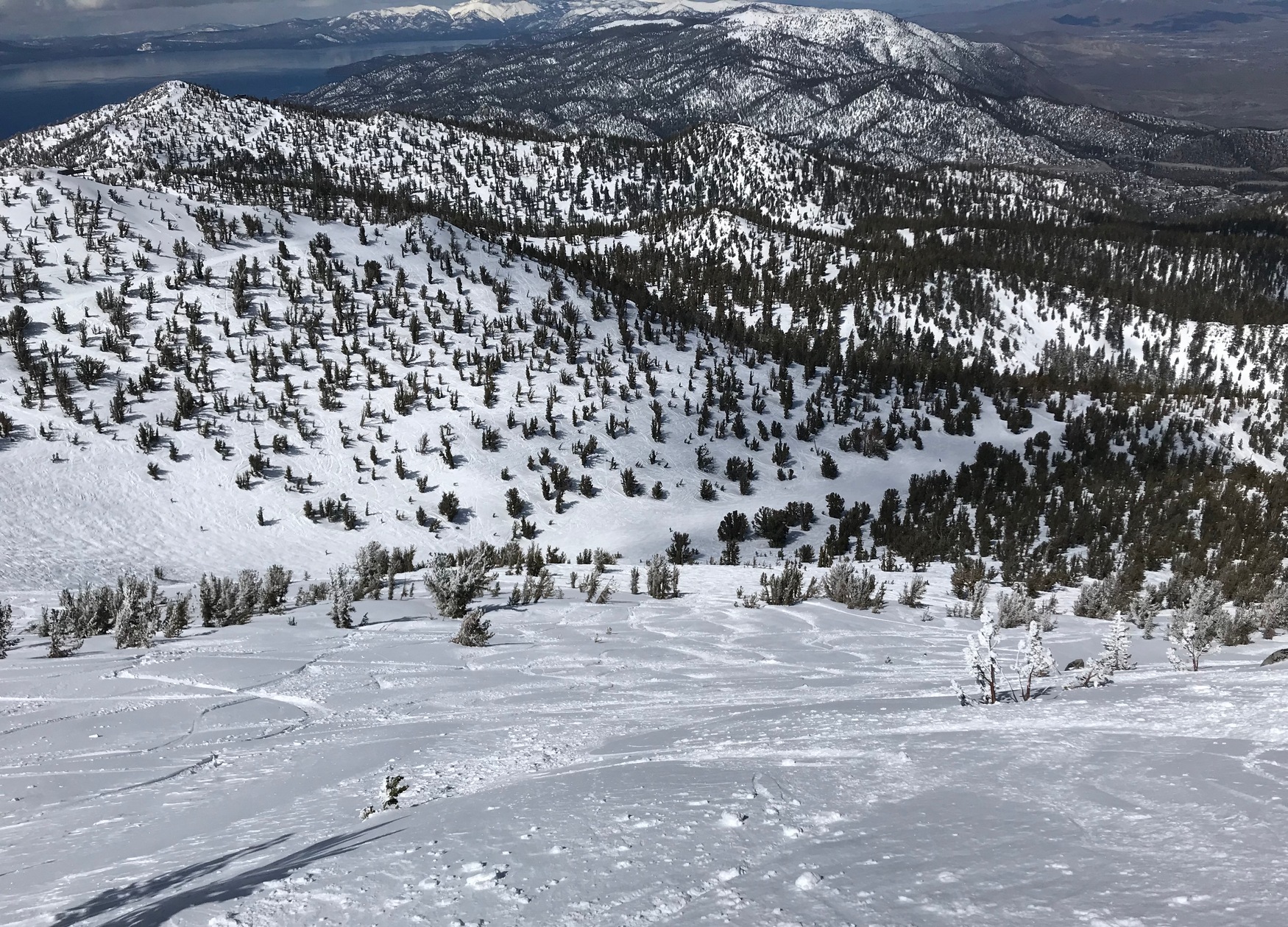 Next two pictures are Stateline Chute which I skied after skiing below Monument Peak.First is entrance (under cloud), where it looks like they have a bomb cable. 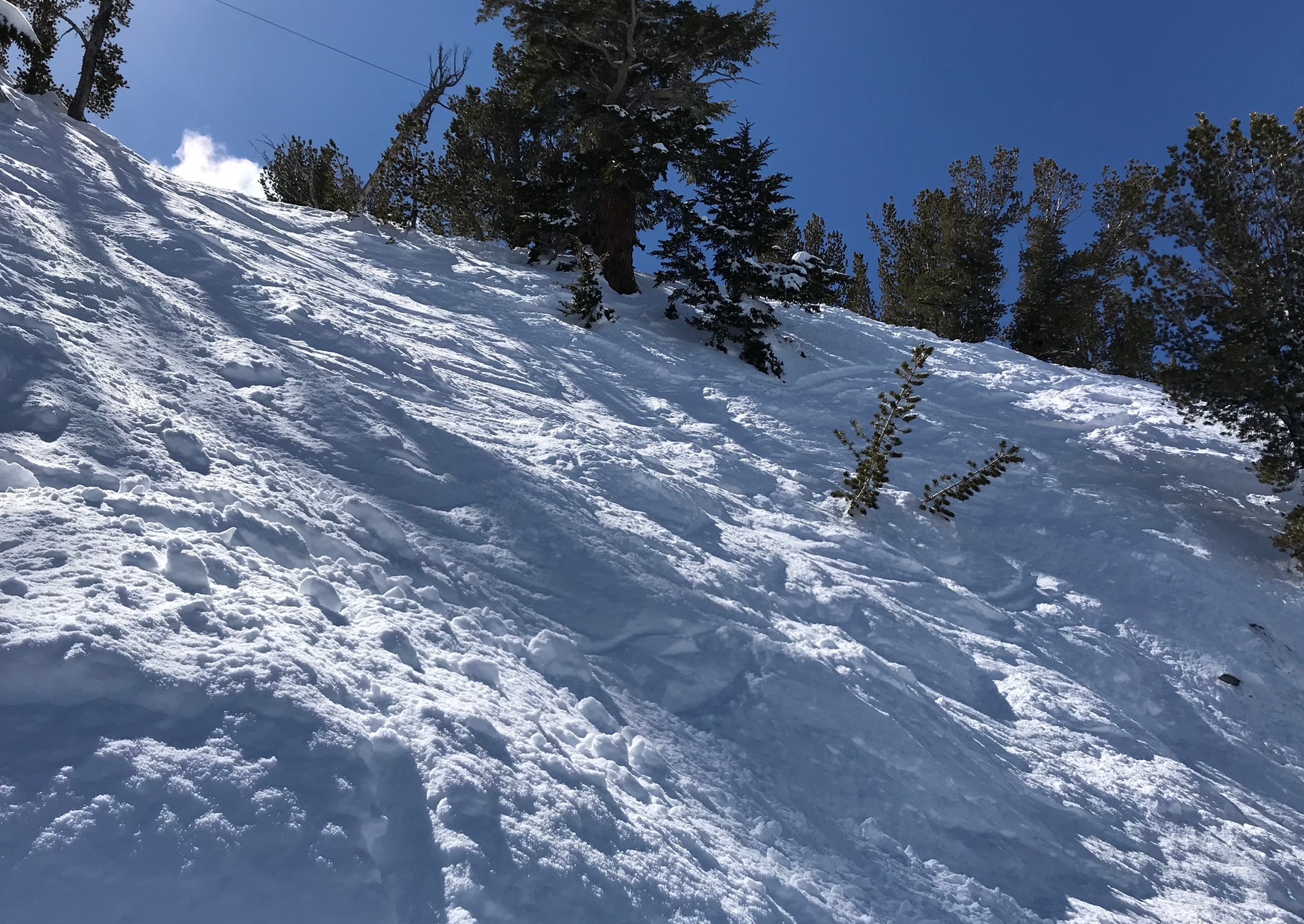 Entrance is at very top, right. Snow was excellent in chute and still deep on sides. 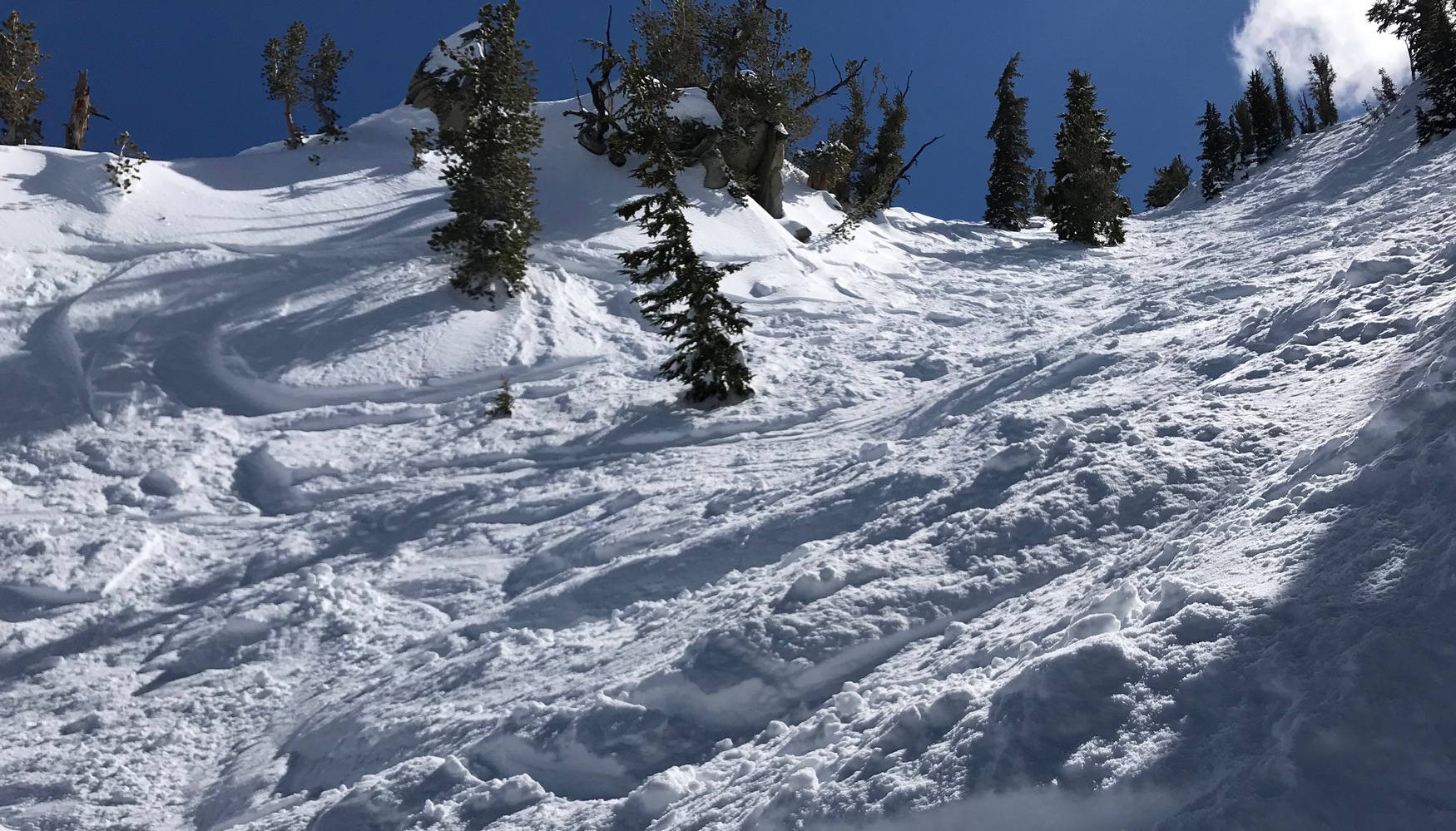 Not sure you need to encourage people to drink while skiing. They have Happy Hour starting at 3:30 PM on Fri, Sat and Sun at Tamarack Lodge to spread out crowd downloading gondola to Stateline. 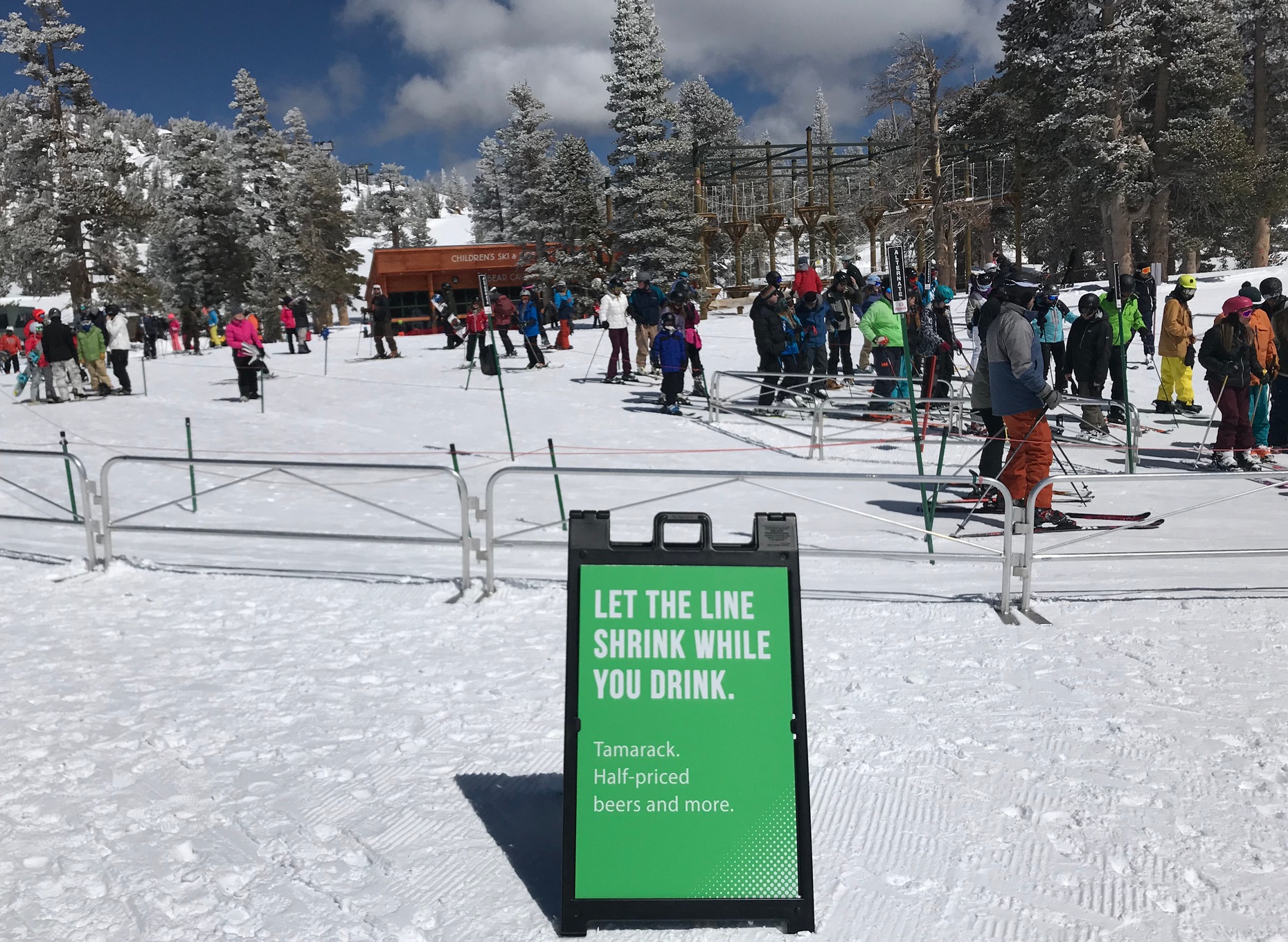 It's a lot cheaper and you don't waste any of your ski day if you bring your own. 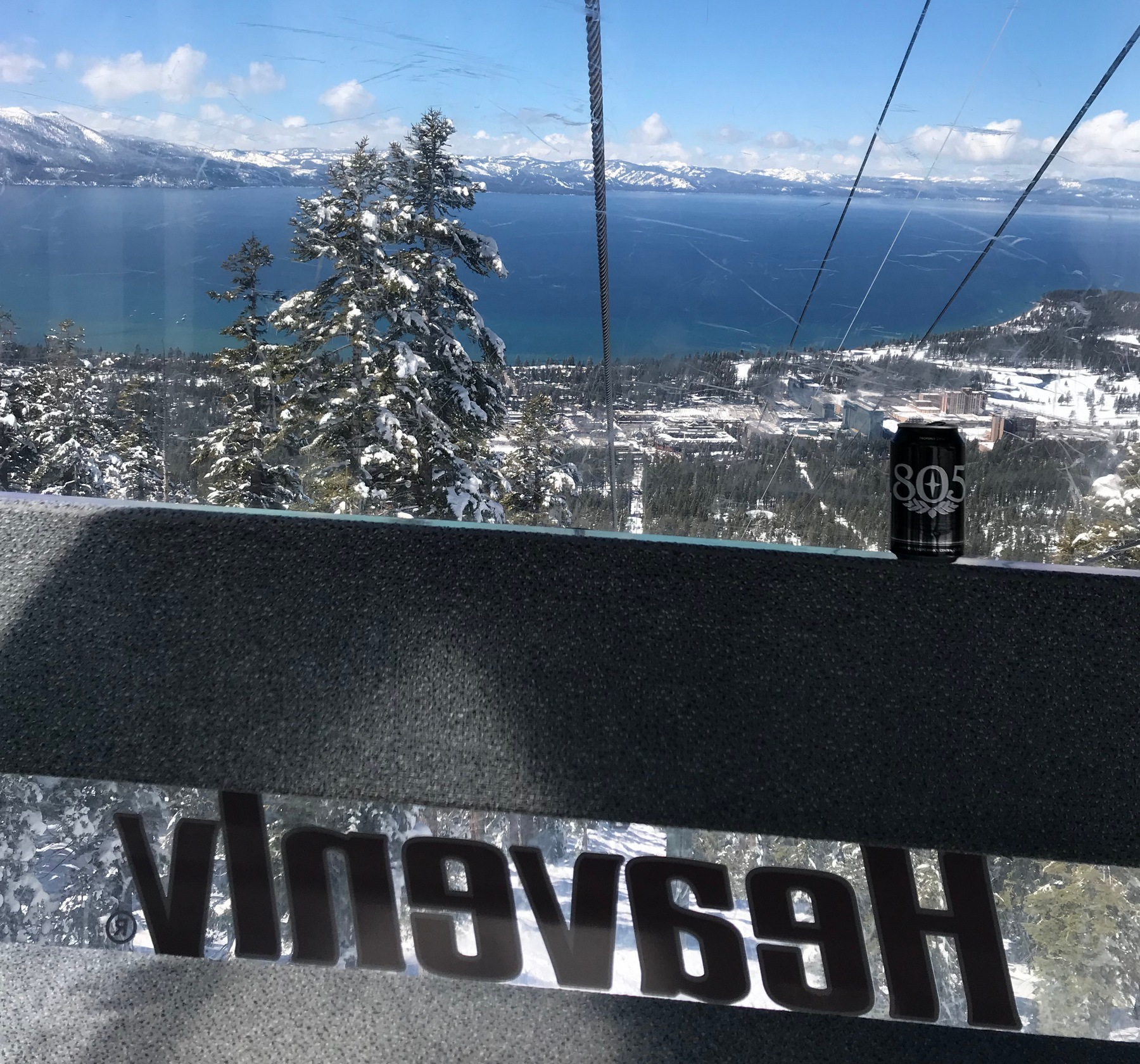 Next picture was taken from Lakeside Casino at about 6 PM. It shows 9,591' East Peak (left of center) where Firebreak gate is located. Firebreak area is on both sides of ridge that ends above gas station and building. Gondola goes up just to left of peak right of center. You don't want to go too far to lookers left as I did on 2nd run on Thursday.

Nice pics; looks like you scored some decent late winter powder. I agree with your point about not wasting ski time by stopping to eat and/or drink. Since a lot of areas are open from 9-4 (only 7 hours), it's best to maximize the time spent actually skiing, especially considering how much time and money is spent on passes, transportation, lodging, etc. to be there.

This TR is just about as good a two day stretch of skiing at heavenly as is possible. Esp with the great side-country laps in prime condition. =D>