Staff member
Independence Pass is at 12,095 feet between Leadville and Aspen and typically opens just before Memorial Day but in 2020 was delayed to June 1. From Eagle I exited I-70 at Minturn and followed the Eagle River south on Hwy 24. The Eagle River goes through a deep canyon at Red Cliff. 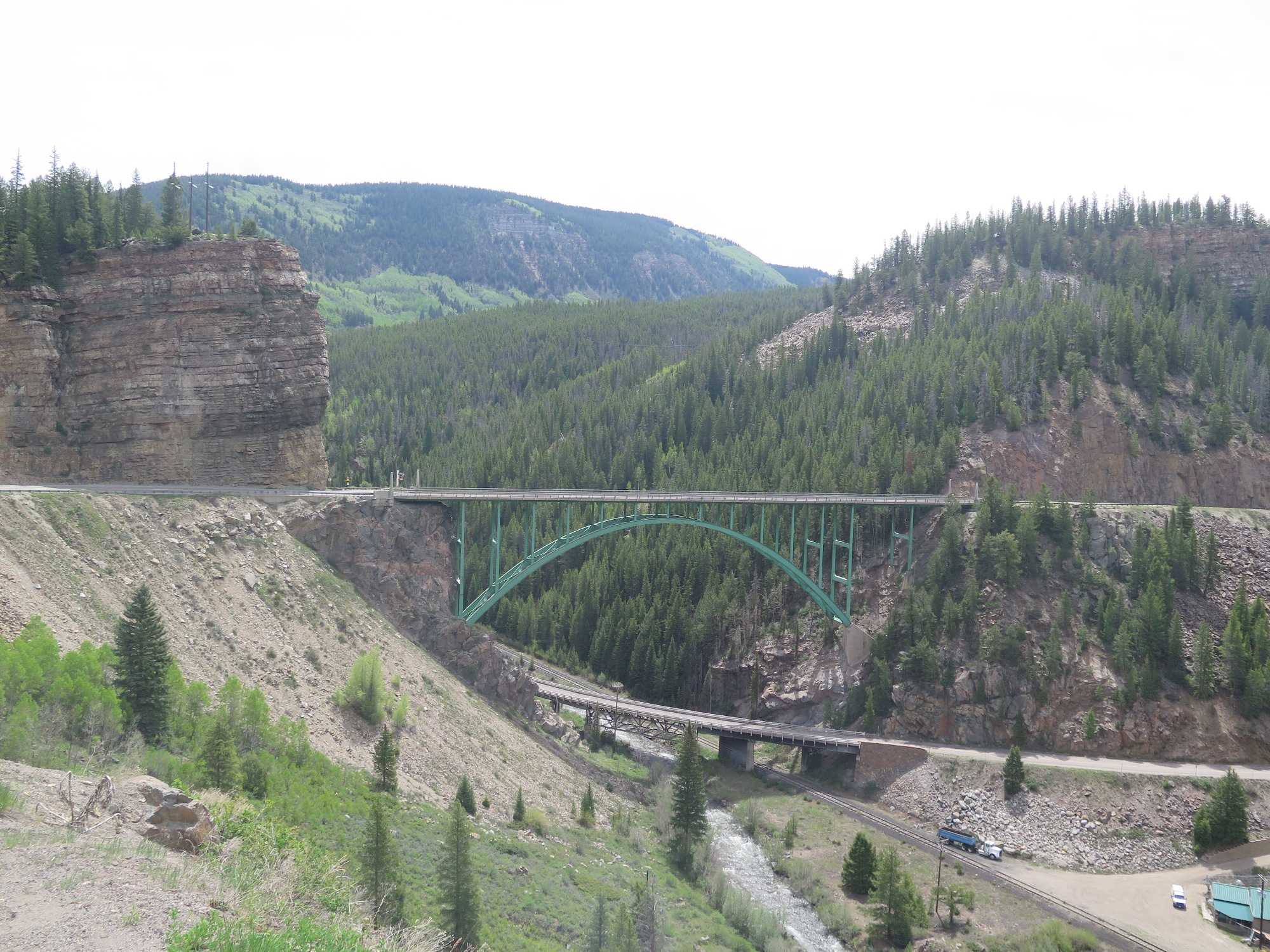 I turned into this pullout for a few pictures. 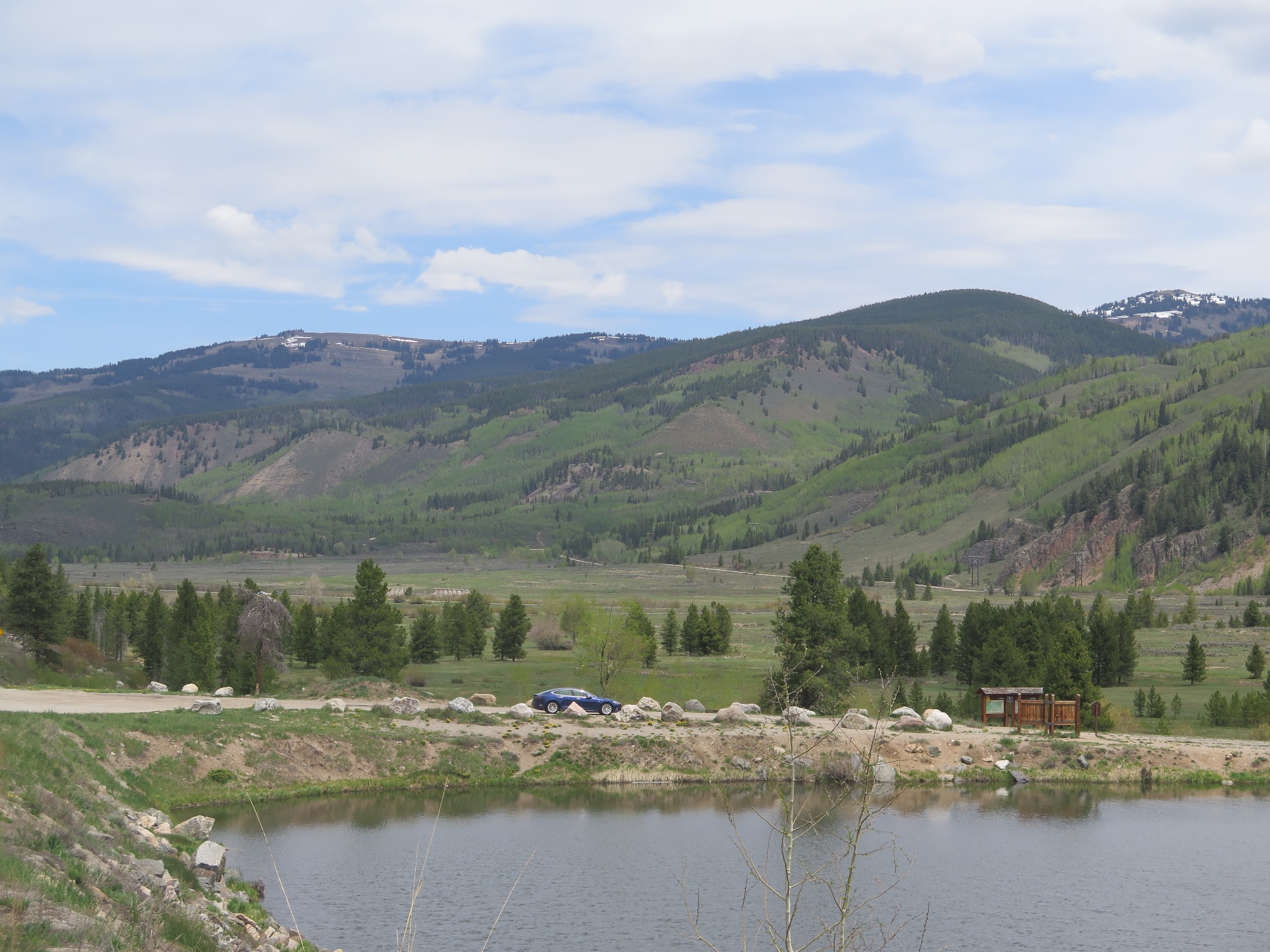 But I was intrigued by this map saying I was at/near Camp Hale. 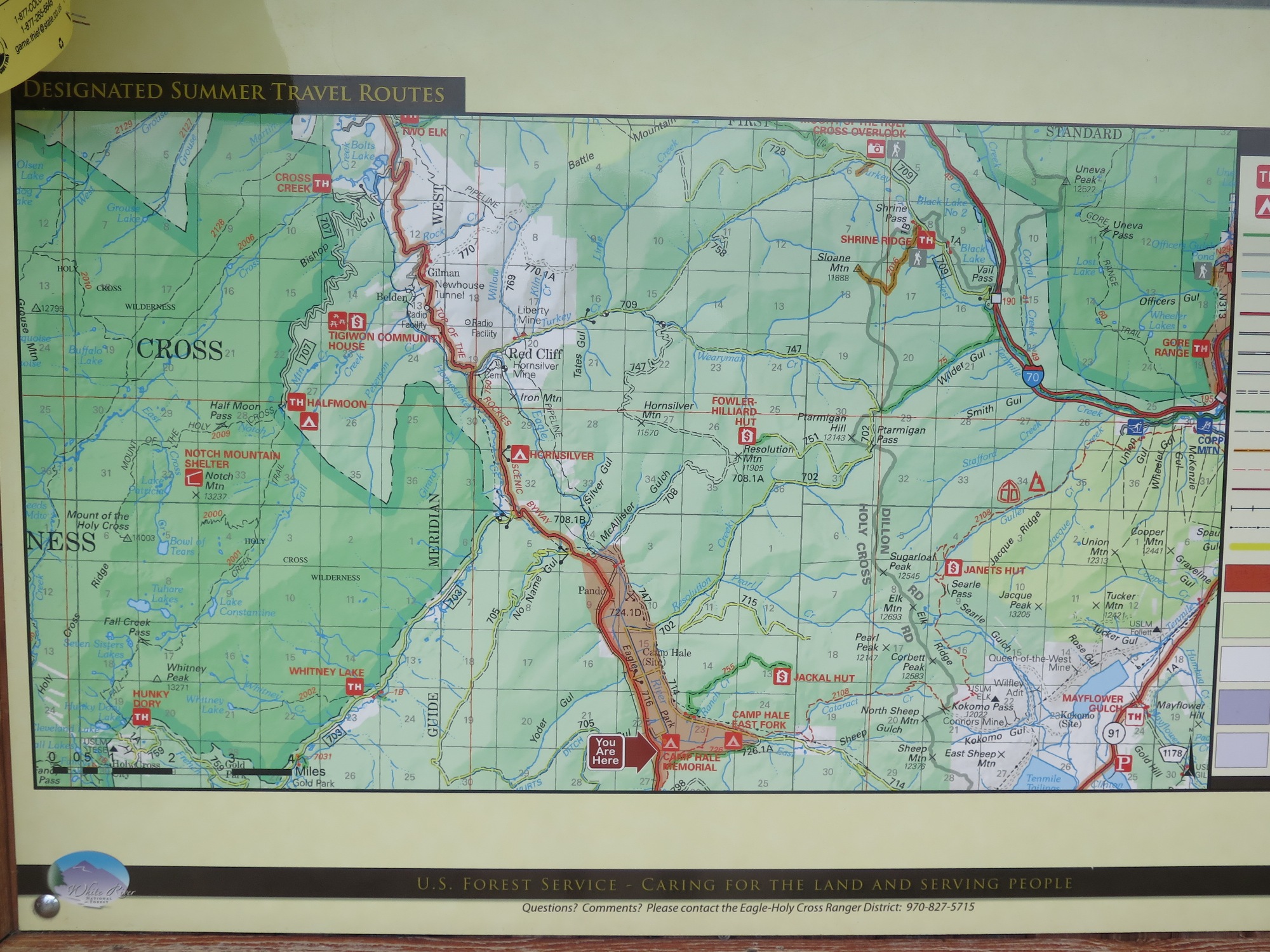 Winter touring huts are on the map too. I saw no evidence of the WWII training camp and so wandered farther into the meadow. These look like trail signs for winter backcountry skiers. 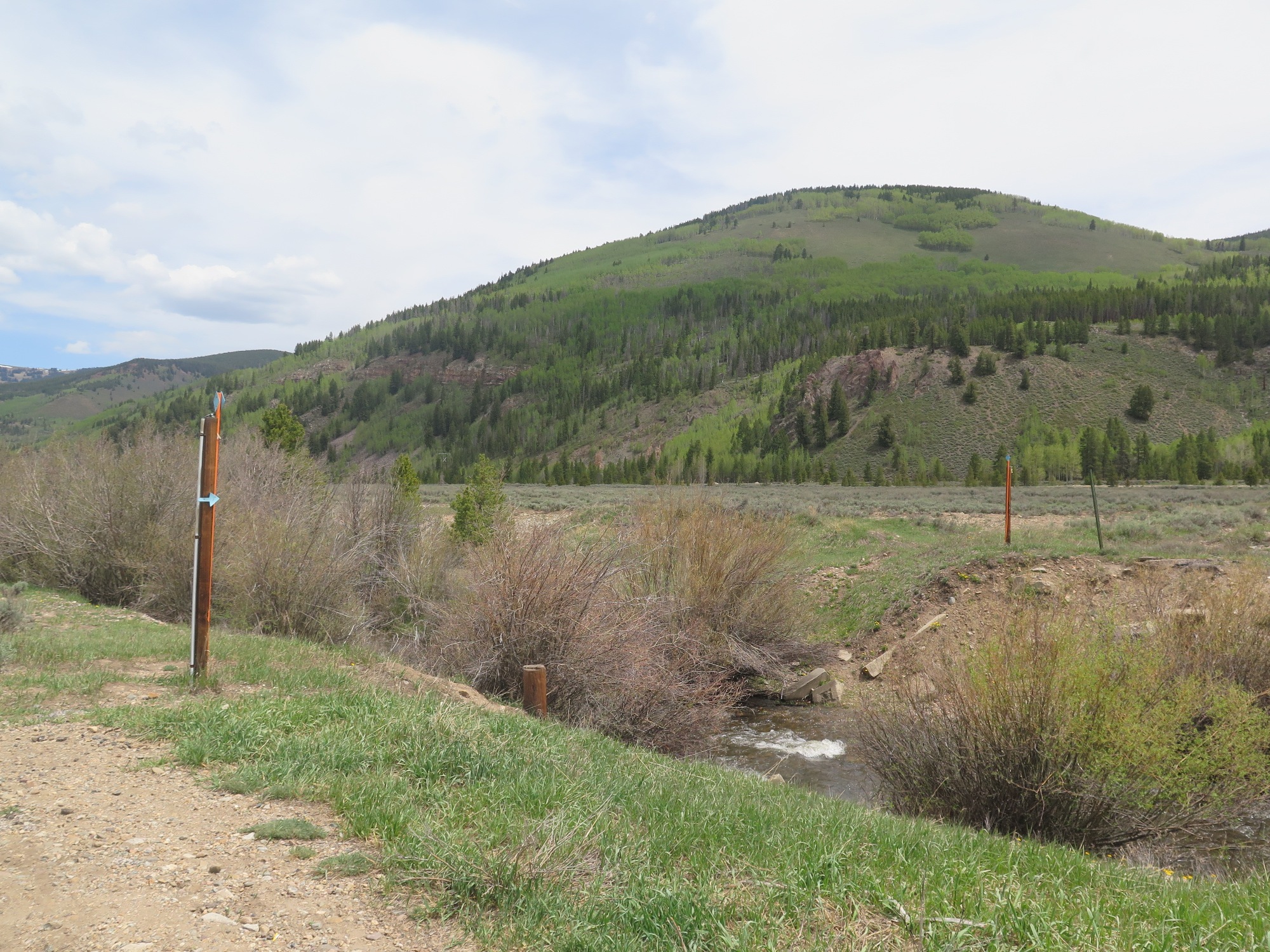 I looked south and was curious about the white dot at the end of this paved road. 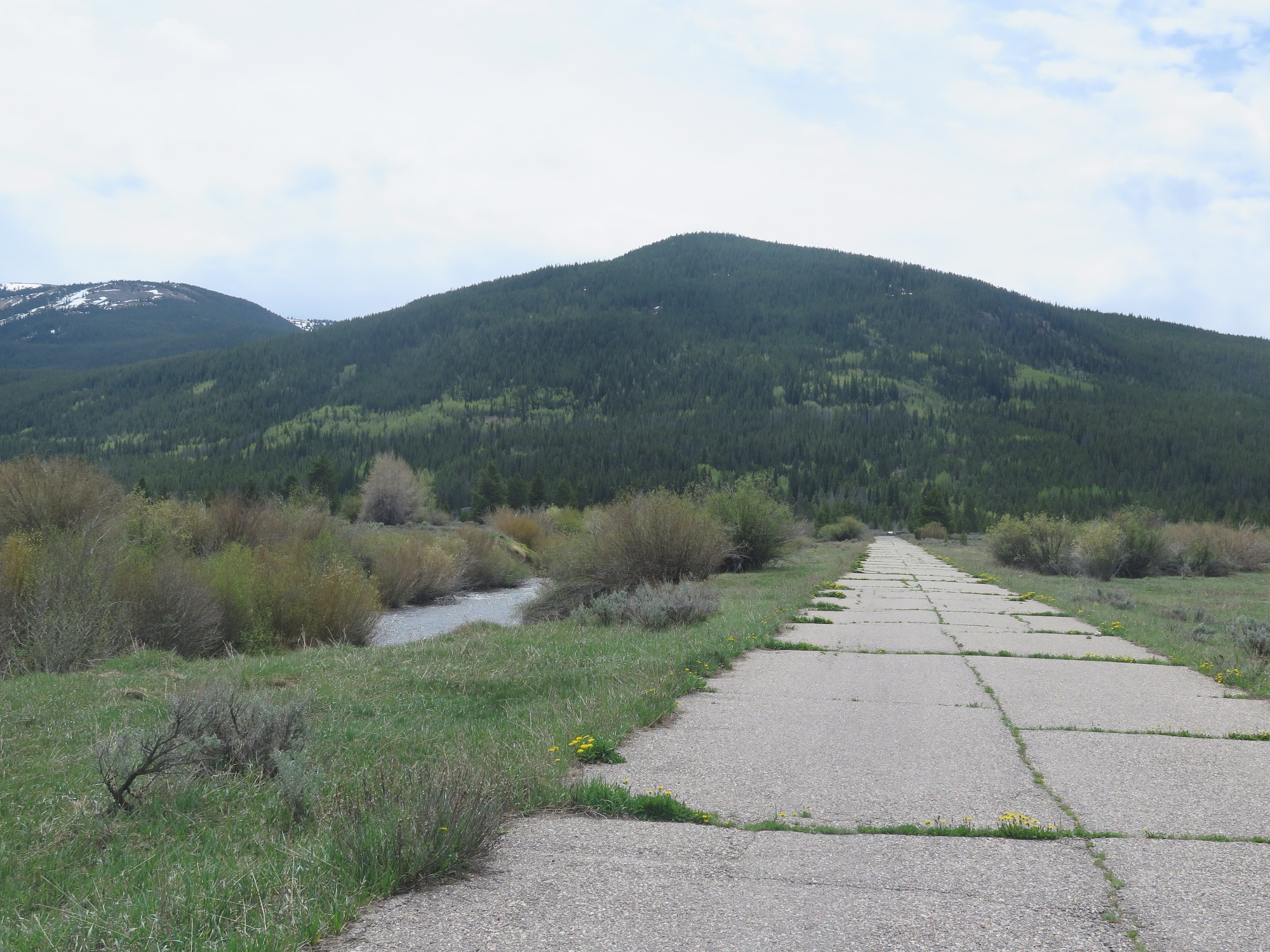 That dot was what I had hoped it would be. 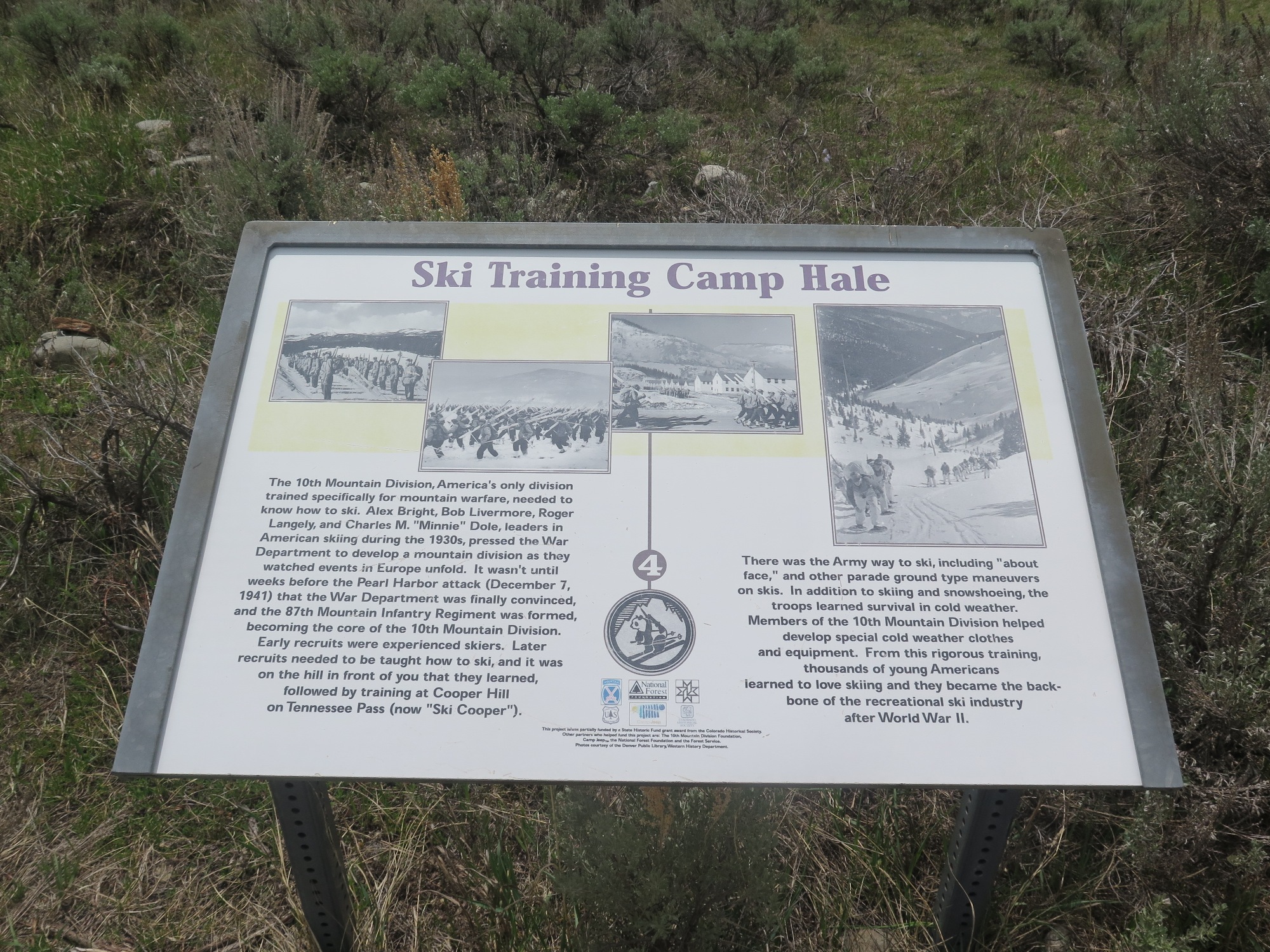 The primary monument to the 10th Mountain Division is at the top of 10,300 foot Tennessee Pass, which is also the entrance to Ski Cooper. 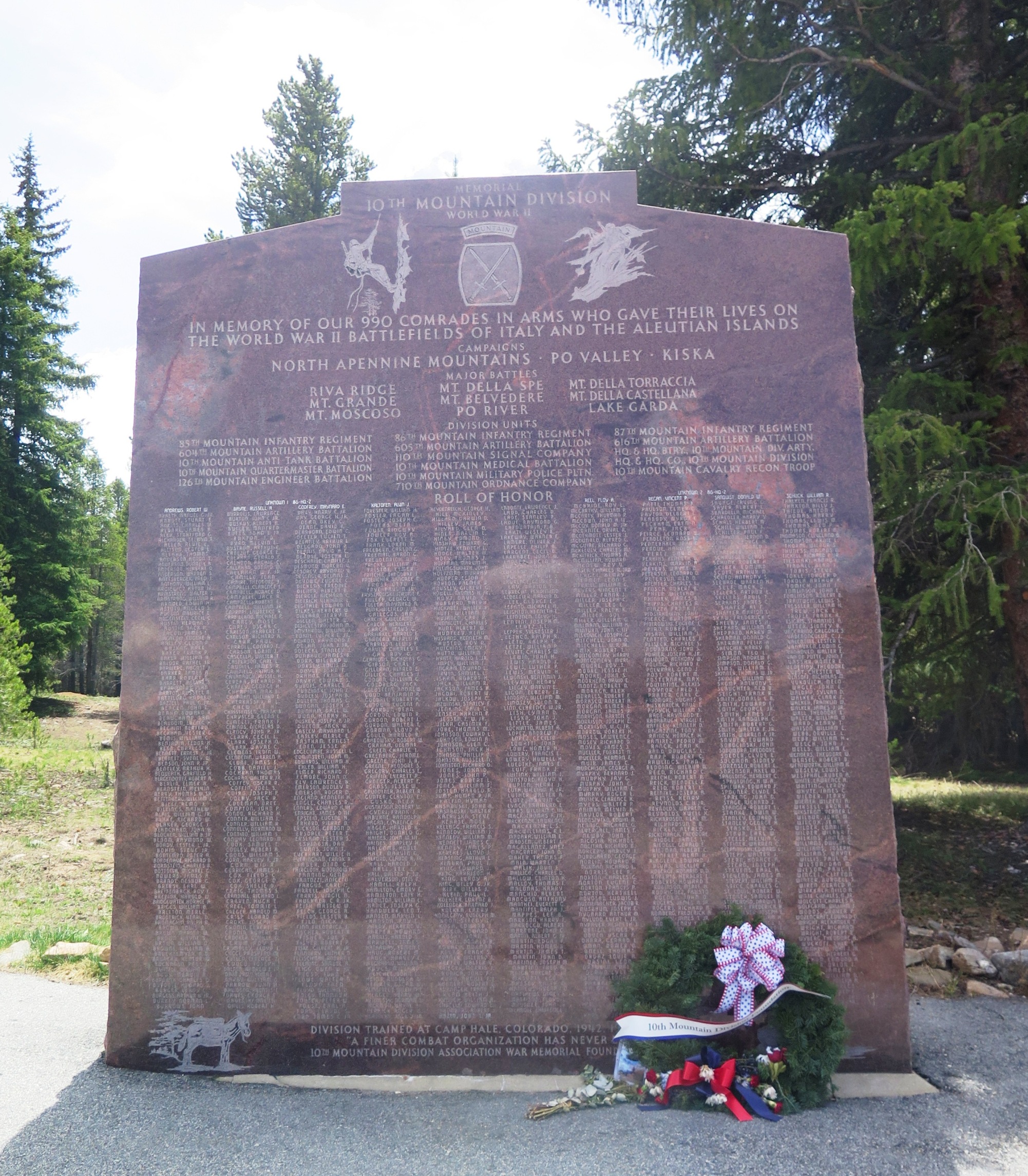 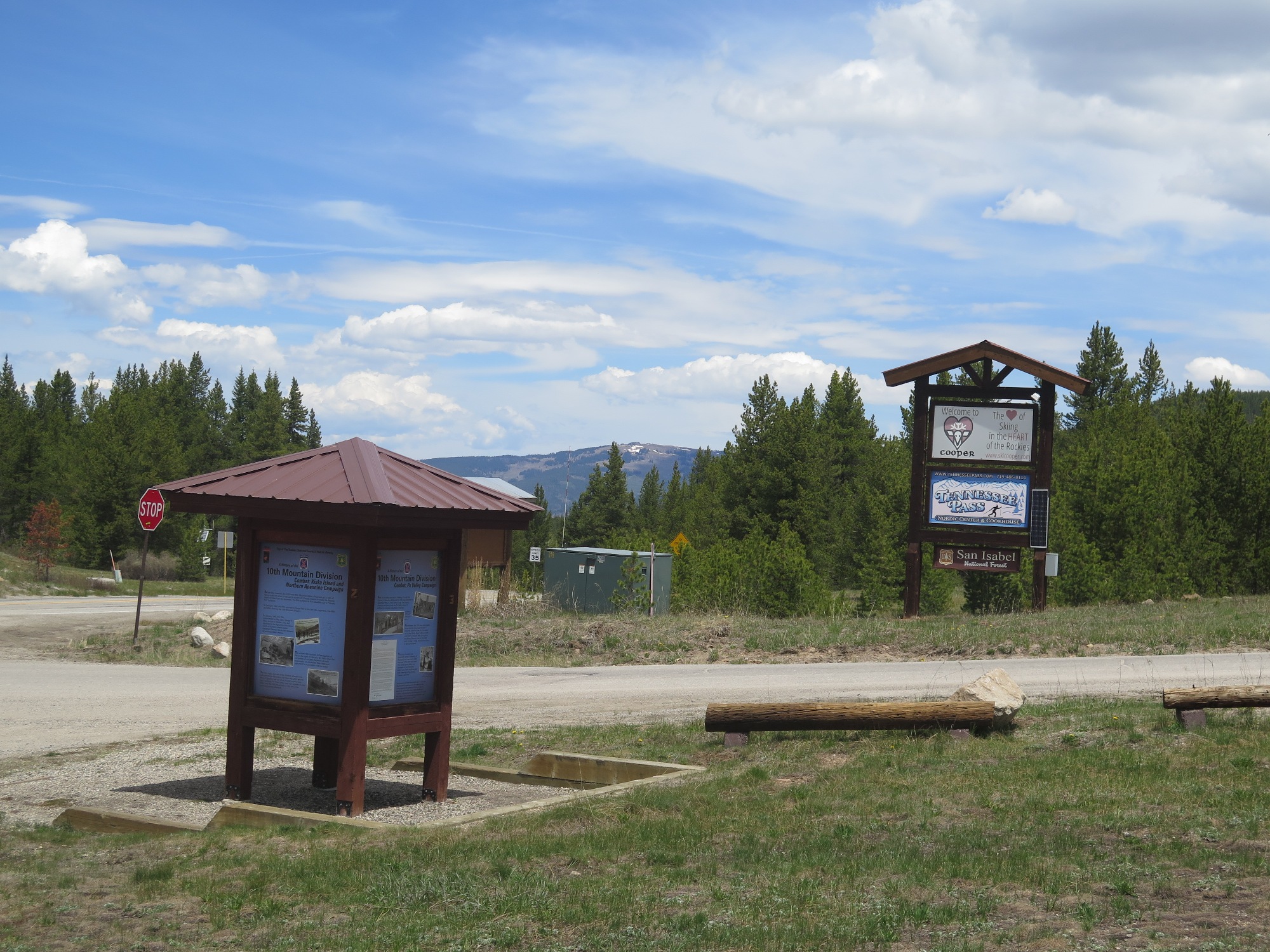 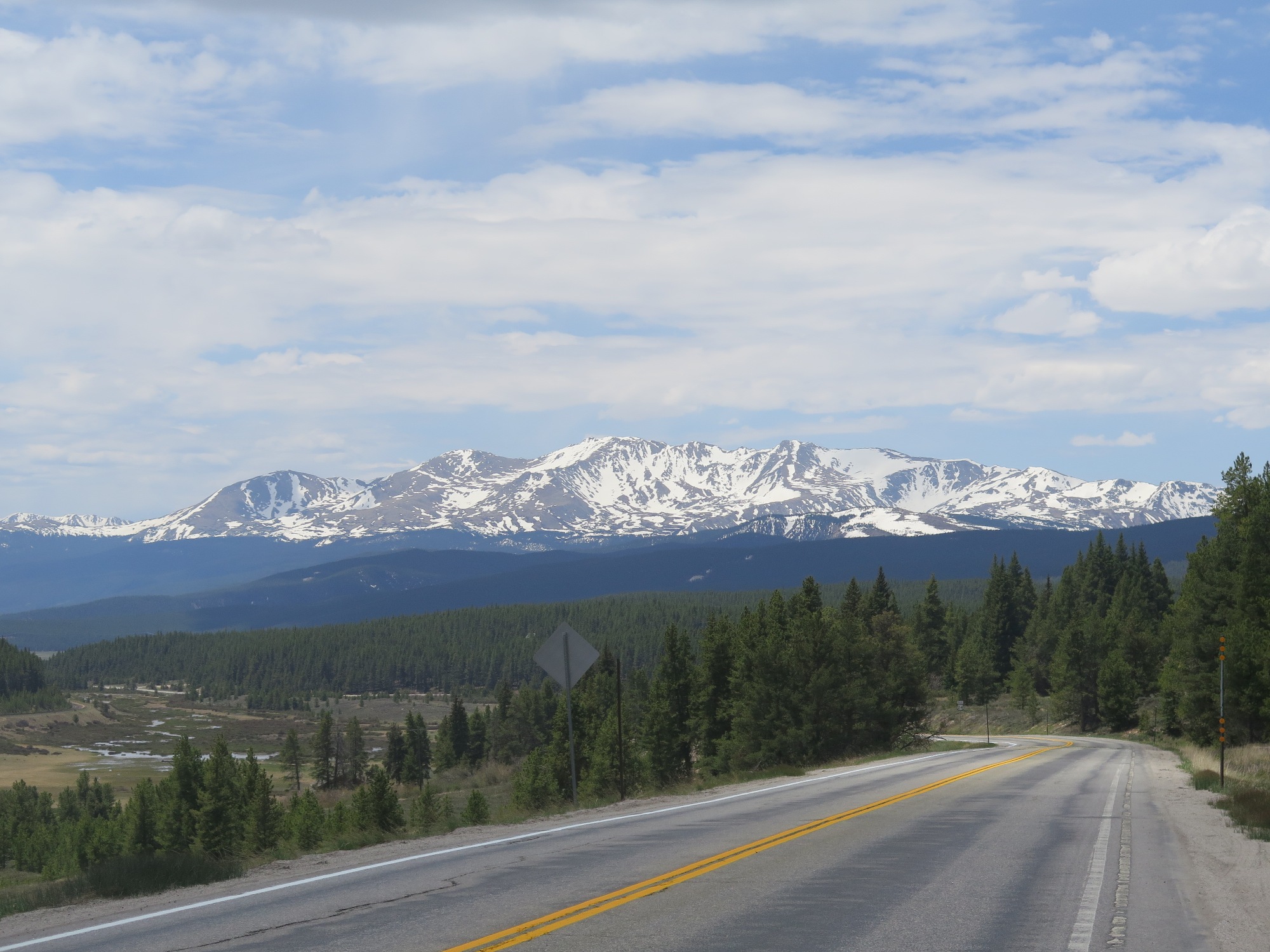 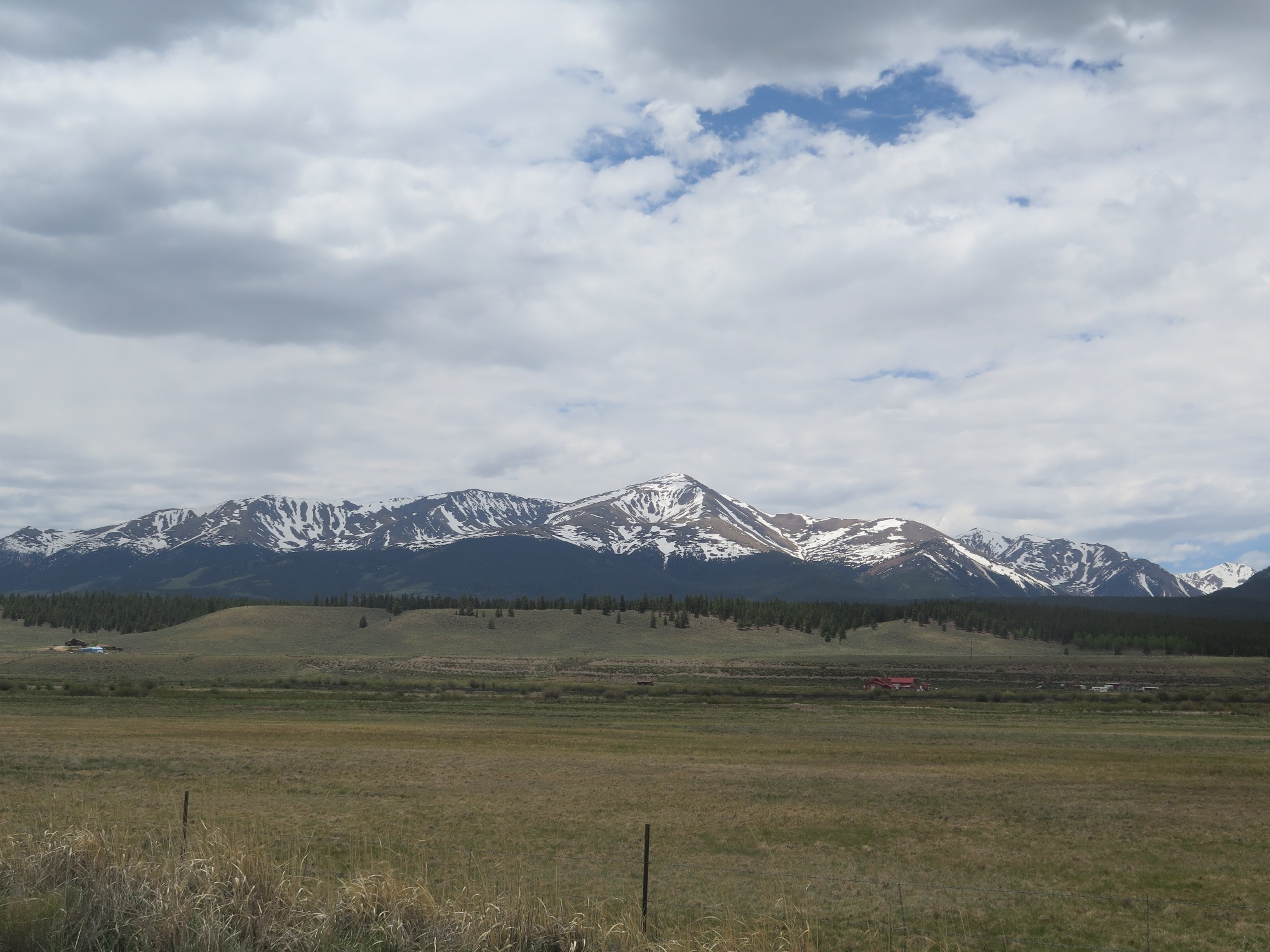 I soon reached newly opened Hwy 82 and headed west. One of the Mt. Elbert trailheads is off this road north of Twin Lakes.

Here’s a fresh avalanche path not far past Twin Lakes. 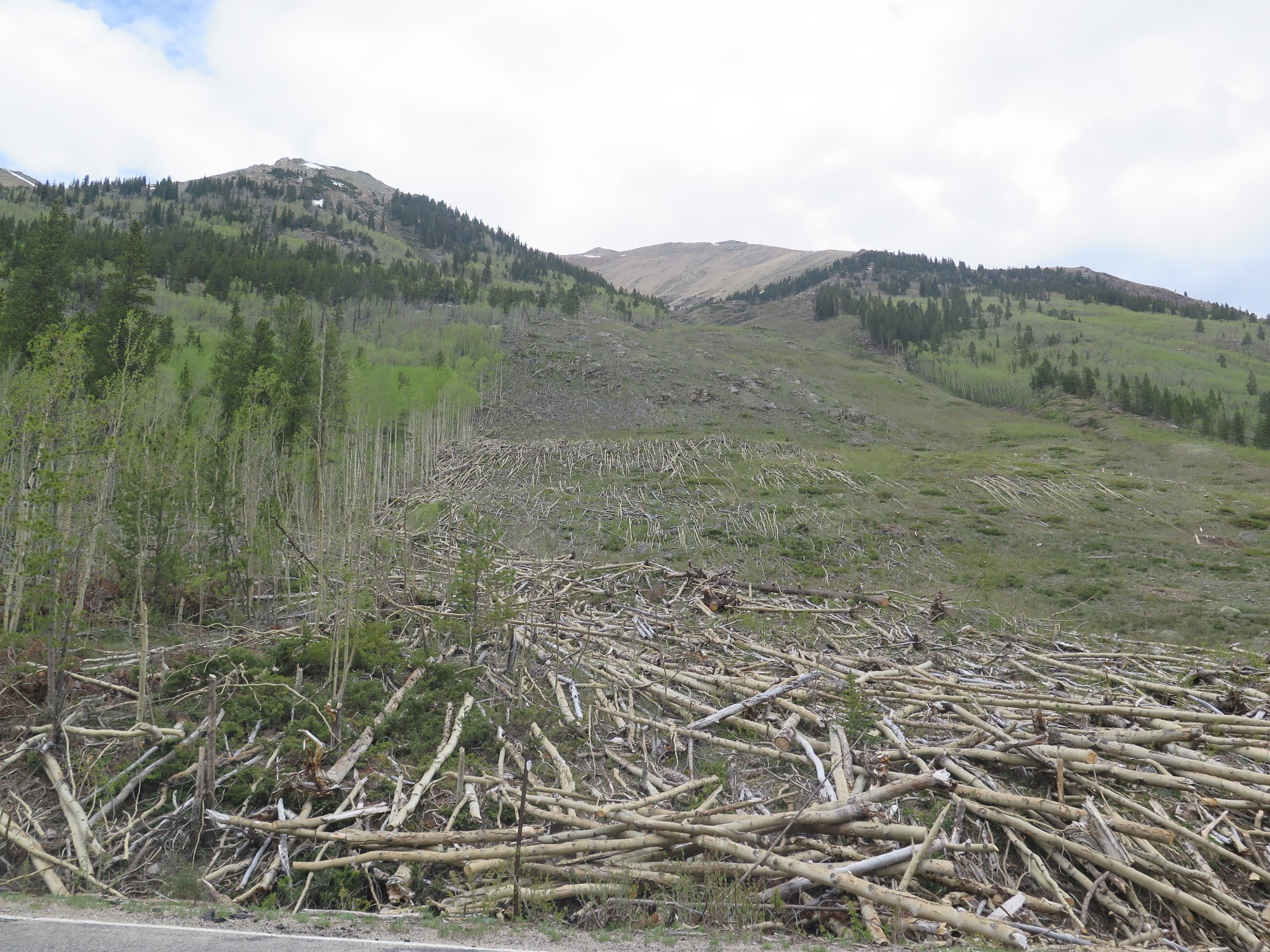 There was another avalanche between Aspen and Independence Pass which crossed the Roaring Fork and flattened trees up to 100 feet above the road on the other side. 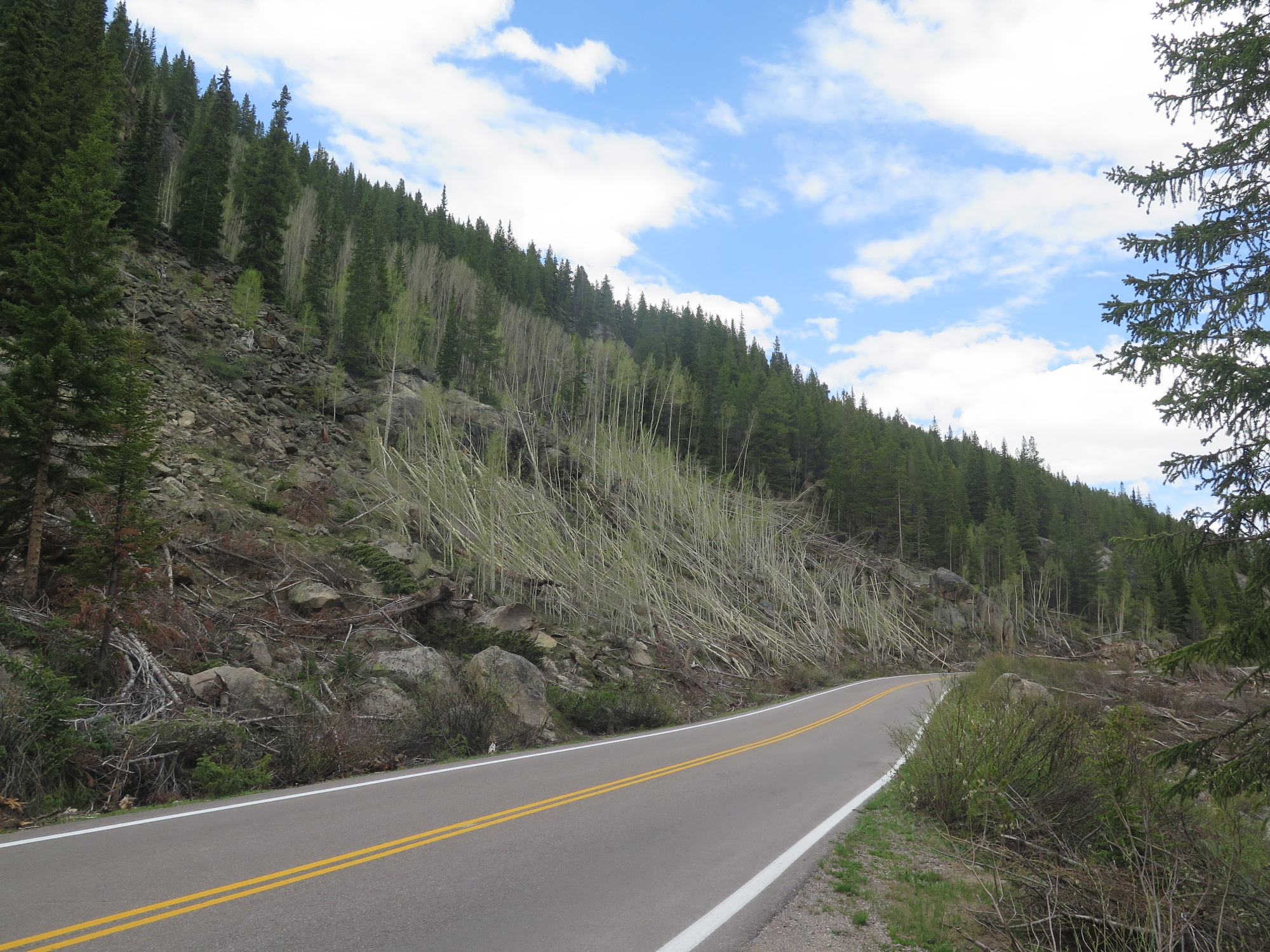 This mountain goat was near the switchbacks on the east side of Independence Pass. 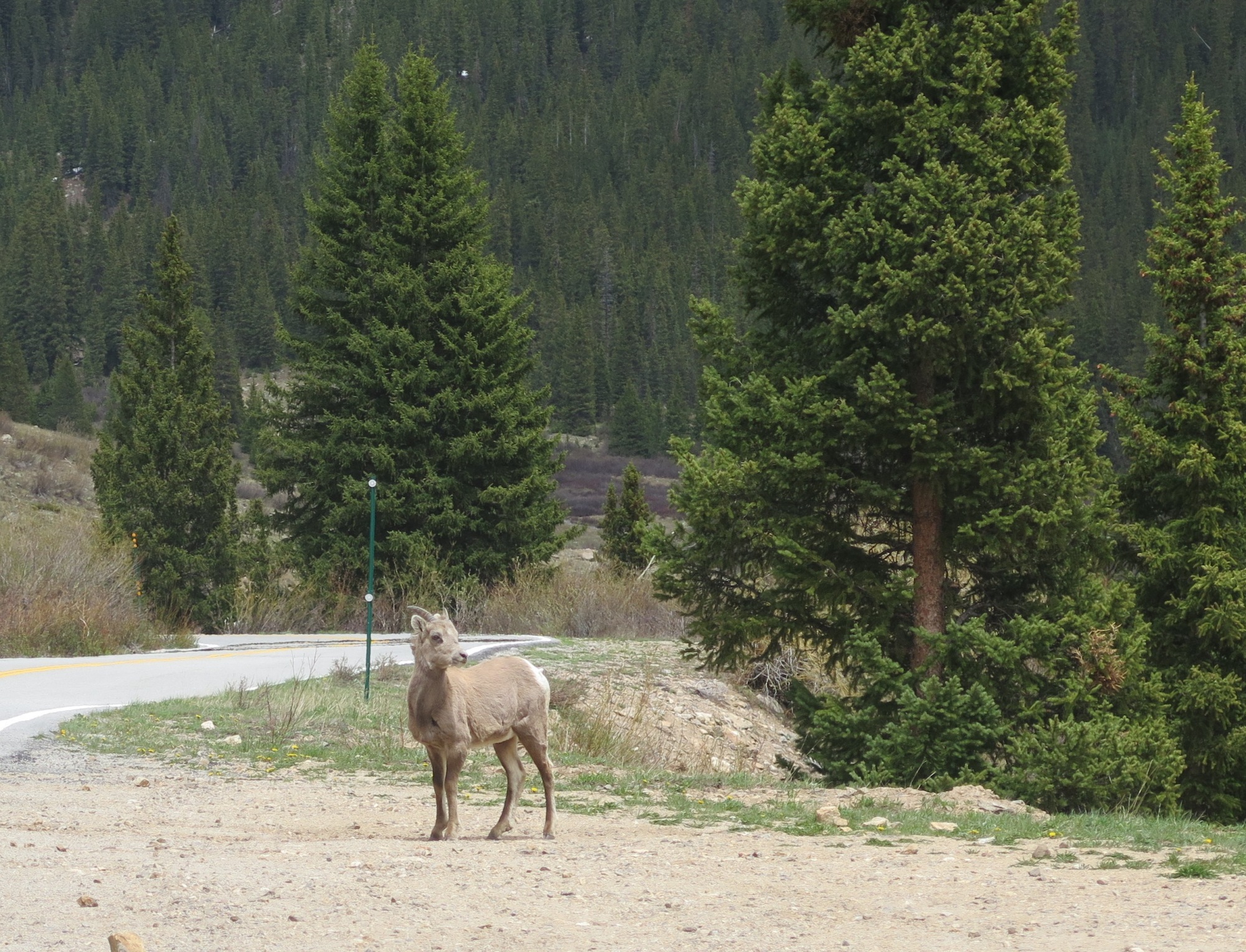 This was my first view of potential ski terrain. 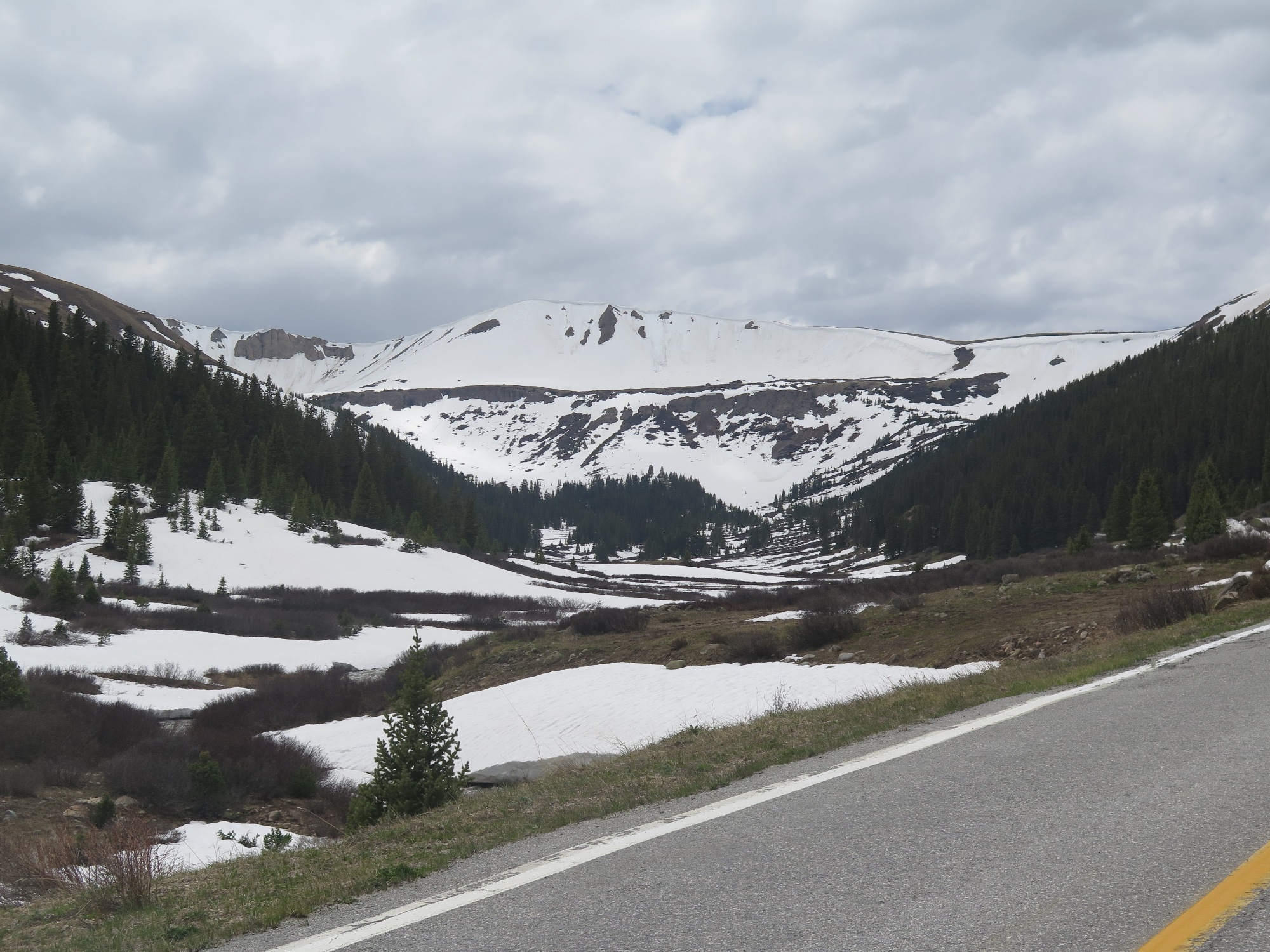 That looks like a swampy exit and from Google maps I knew that the NW slopes on the opposite side of the ridge above had better ski potential.

I’m finally at the top of the pass about 2PM. 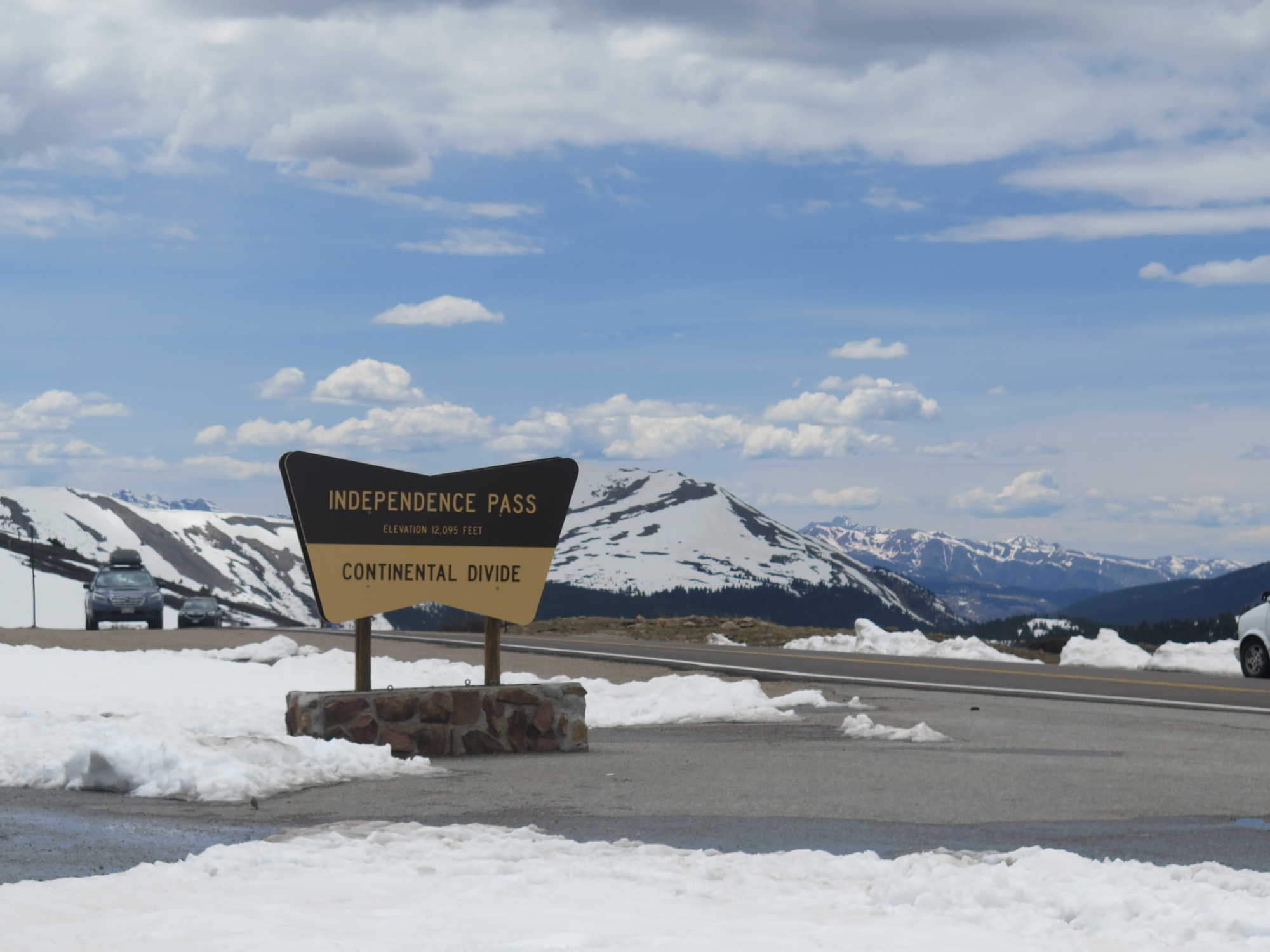 There is a paved walkway on the south side of the pass so I took that to this overlook east to the road I had just driven. 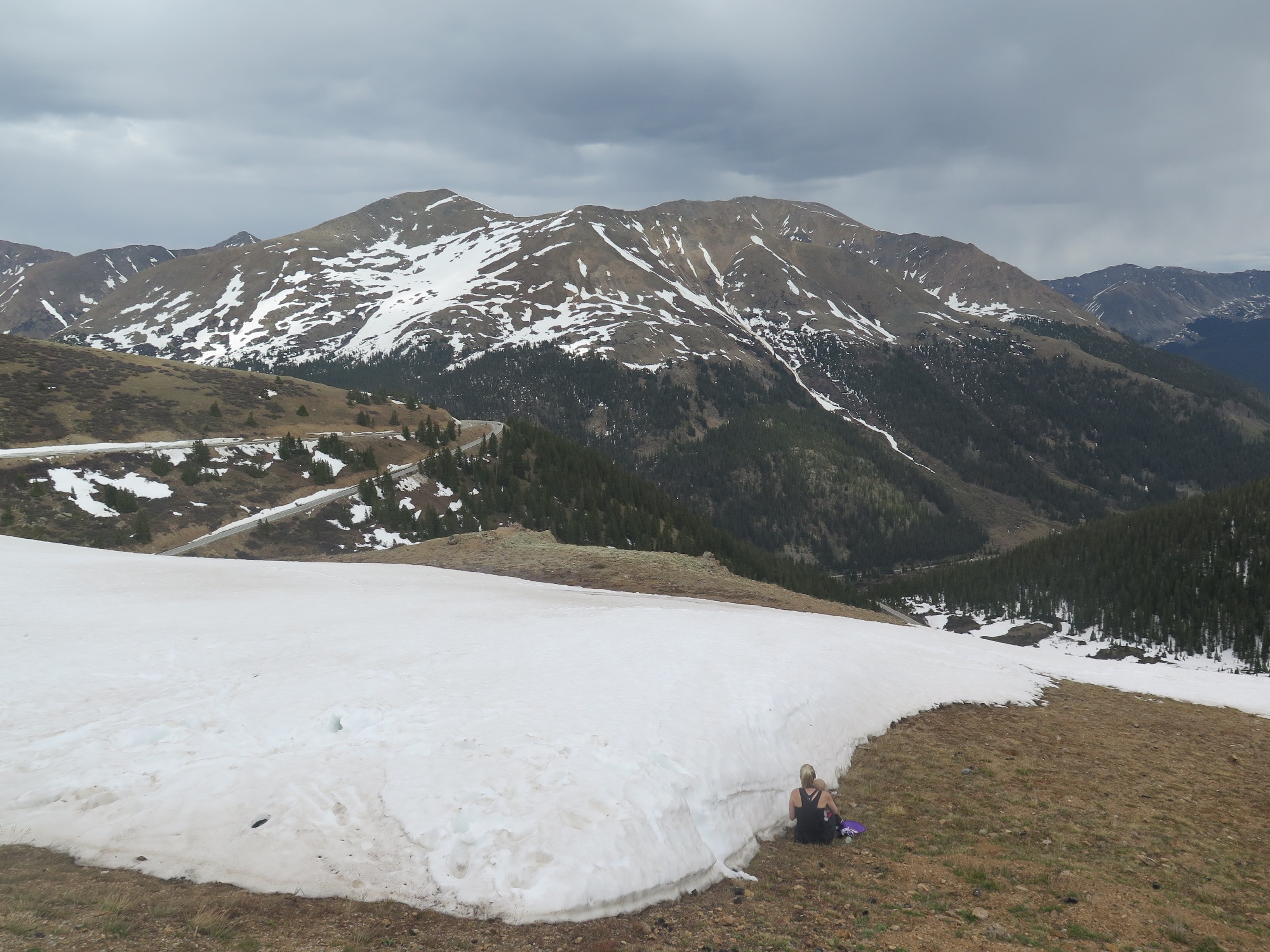 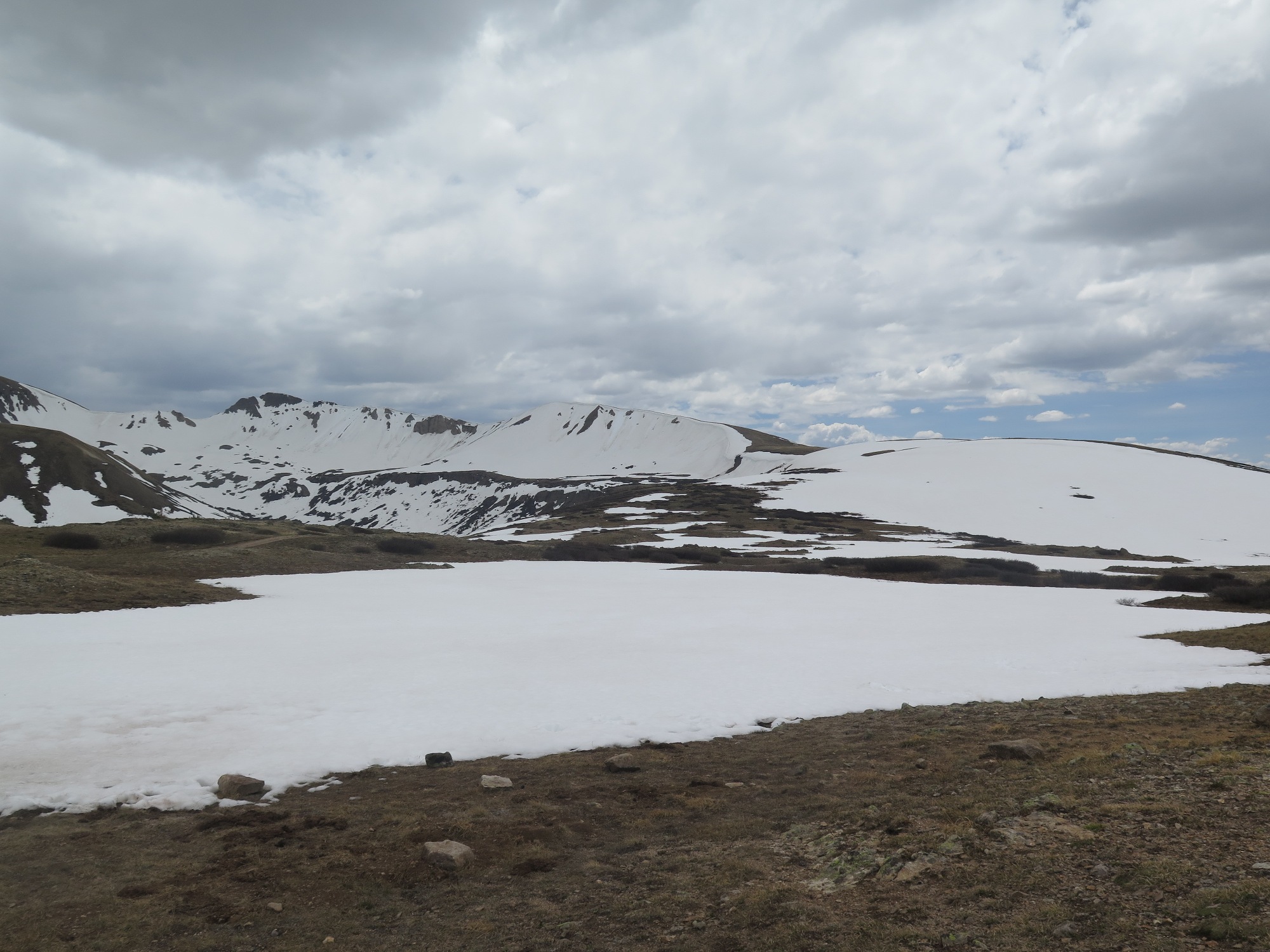 You need to walk along that ridge for maybe 1.5 miles to reach the NW facing ski terrain.

But the 300 vertical foot drop from the walkway to the eastern road is easily skiable. Paul was concerned there might not be a shoulder to park for ski shuttles, but I drove back down there and found this spot. 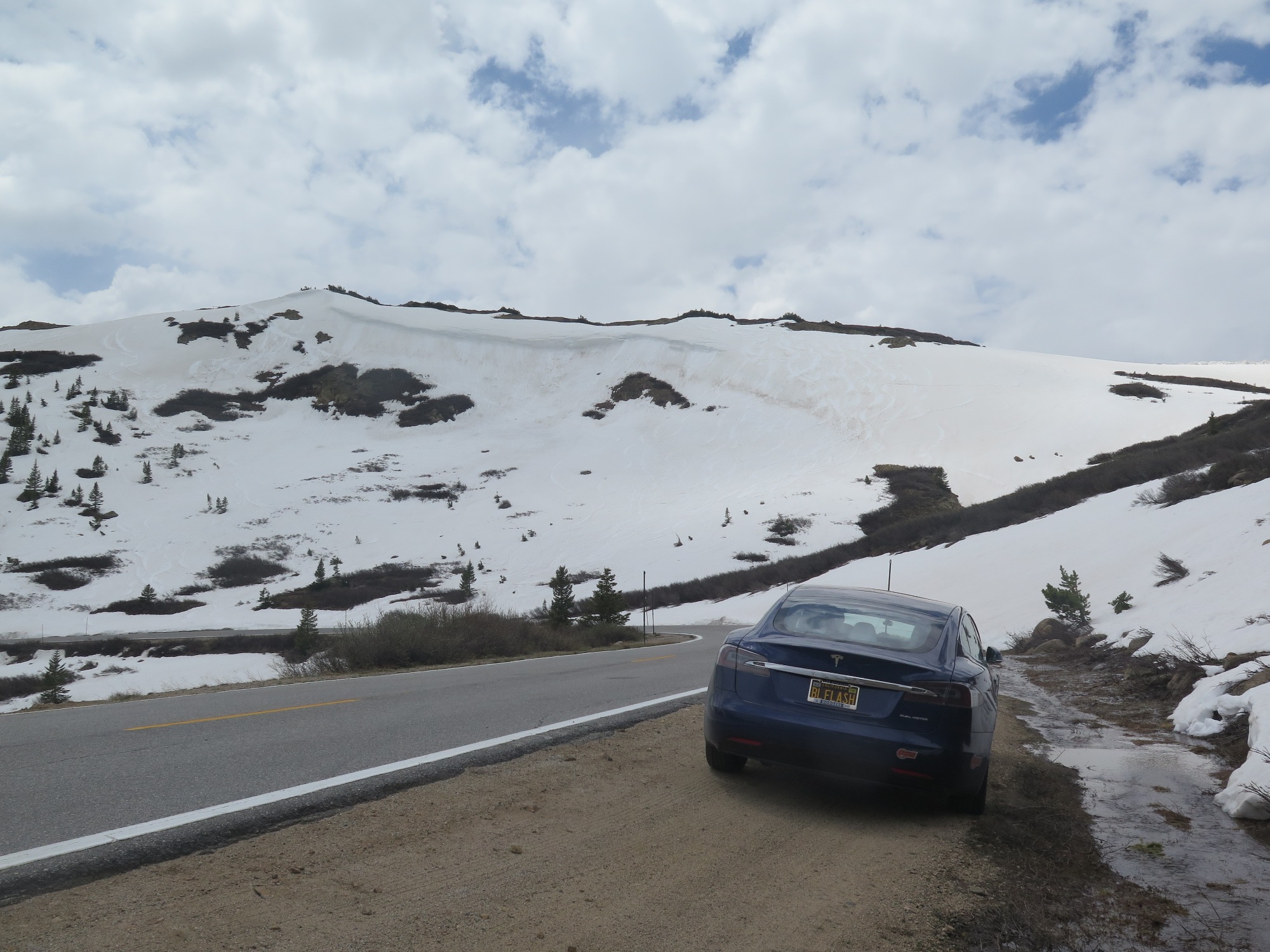 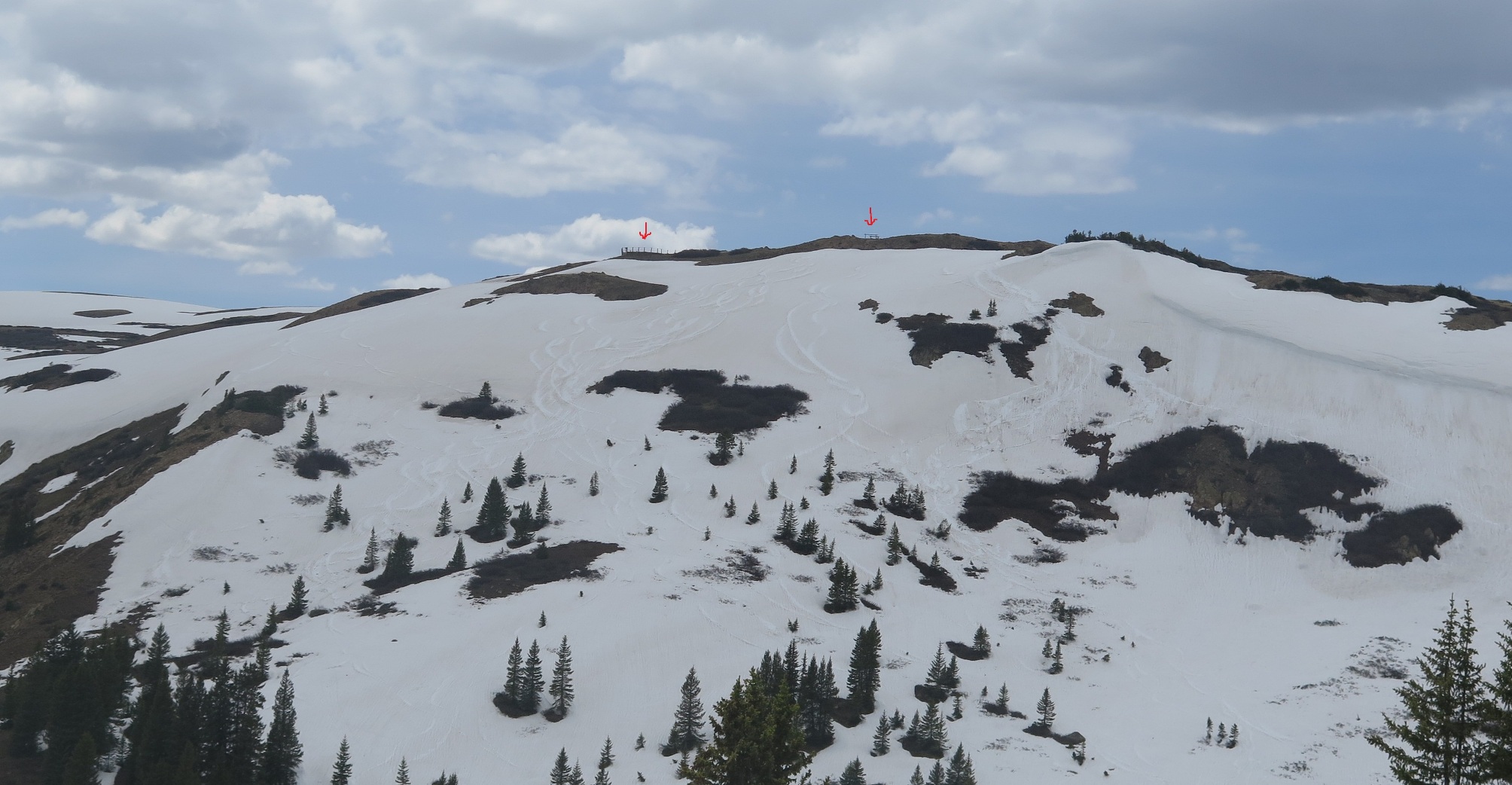 No wonder since the arrows show the overlooks from the paved walkway.

While on the walkway I noticed this mellow snowfield with a few skiers including this kite skier. 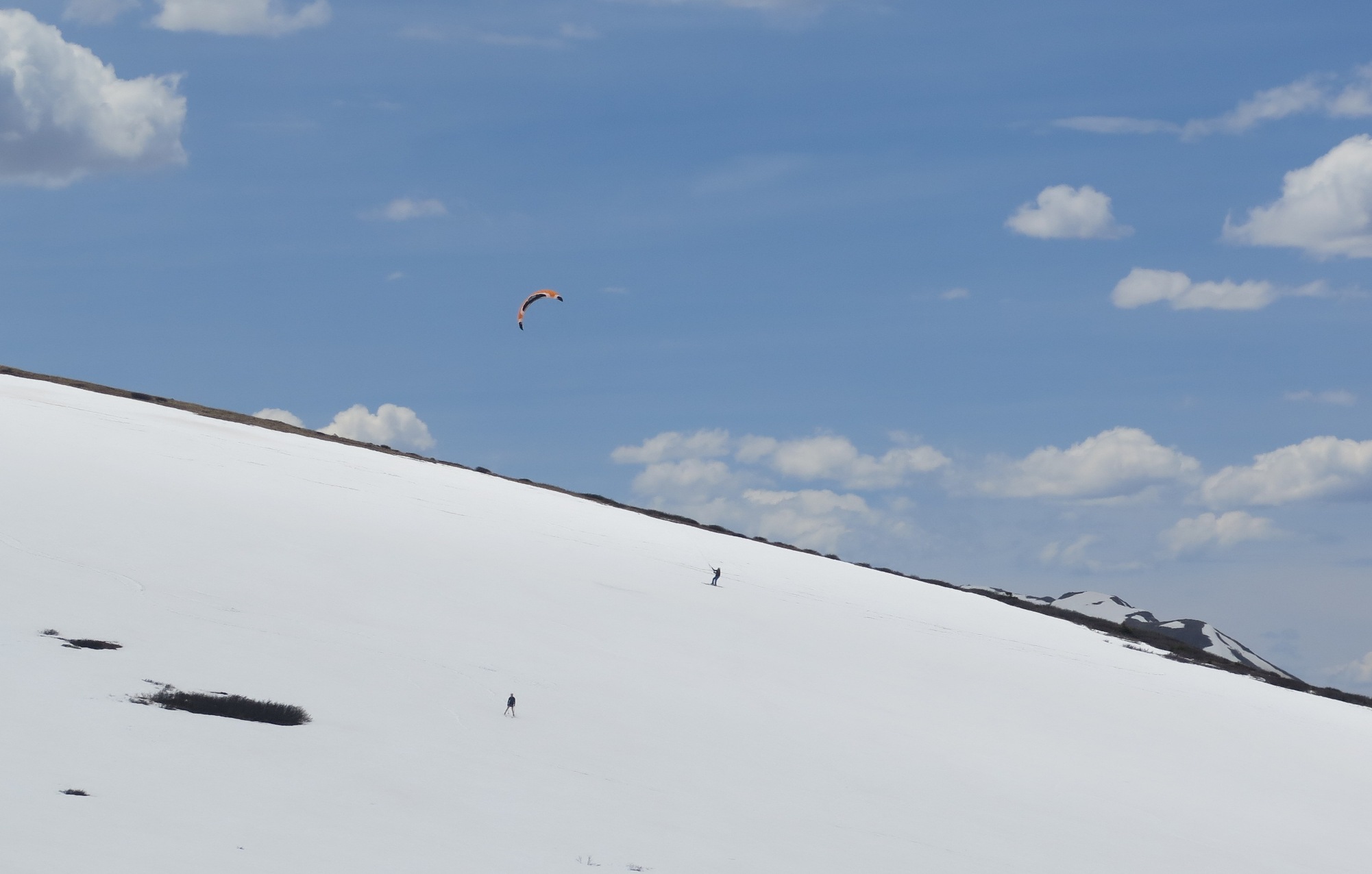 Shortly after this the wind picked up so he could ascend at nearly the rate he was skiing down. I shot a 3-minute video of two descents and one ascent. The snowfield comes down to the road a few hundred feet west of the pass summit. 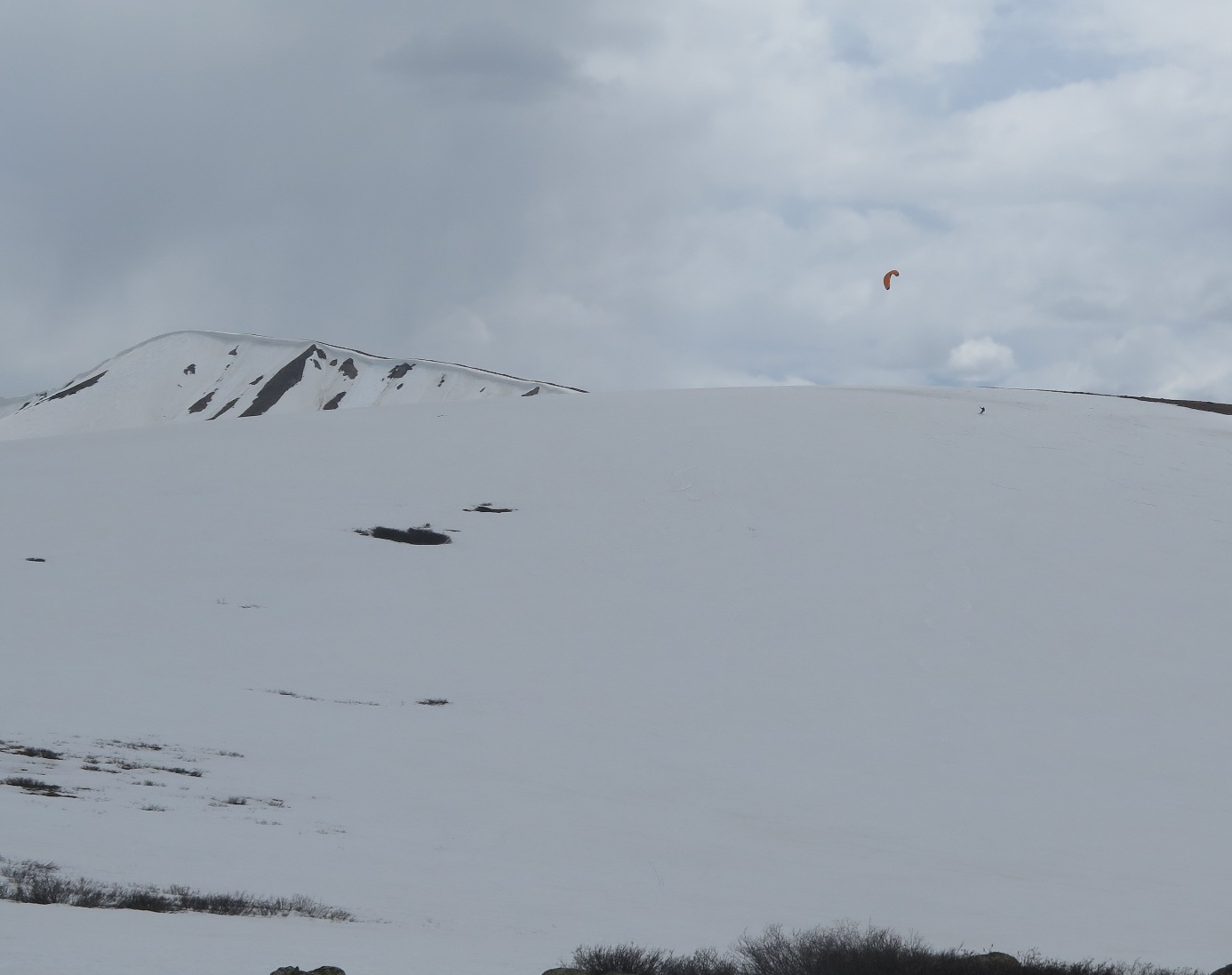 I descended the west side down to 11,000 feet and found a parking spot there too. 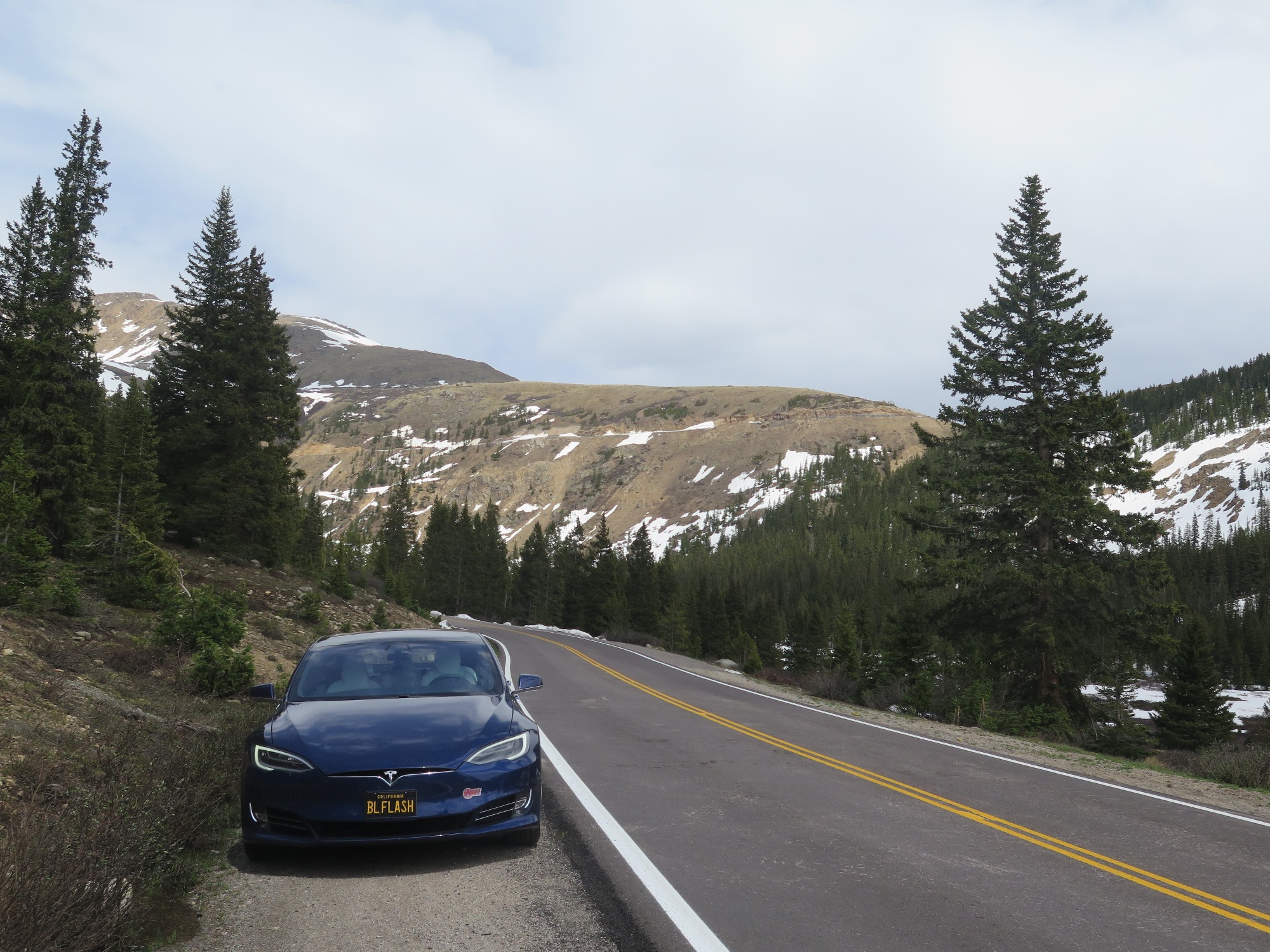 Trees obscured the complete view from that parking spot but a bit farther along I got these views of potential ski runs of about 1,400 vertical. 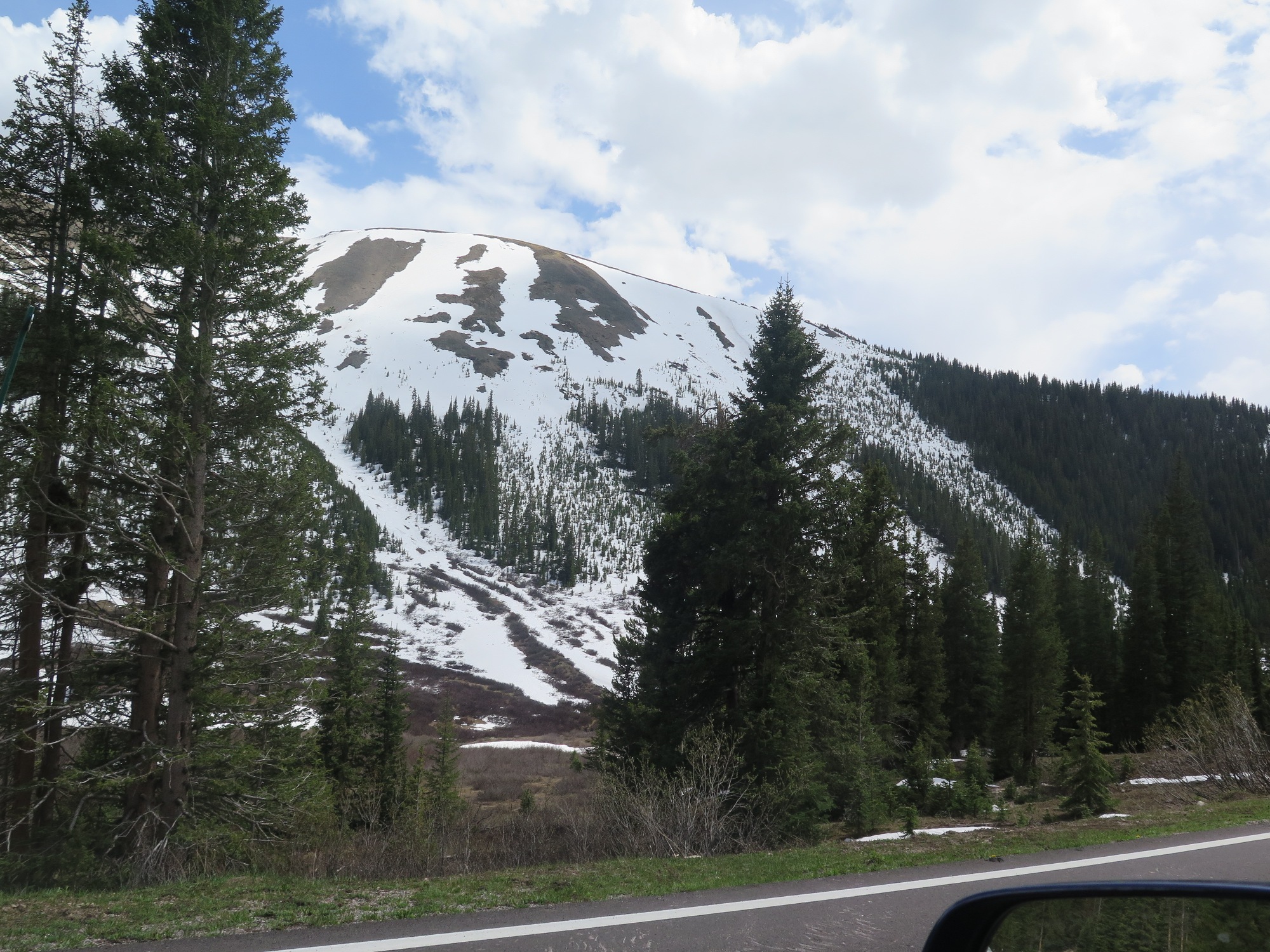 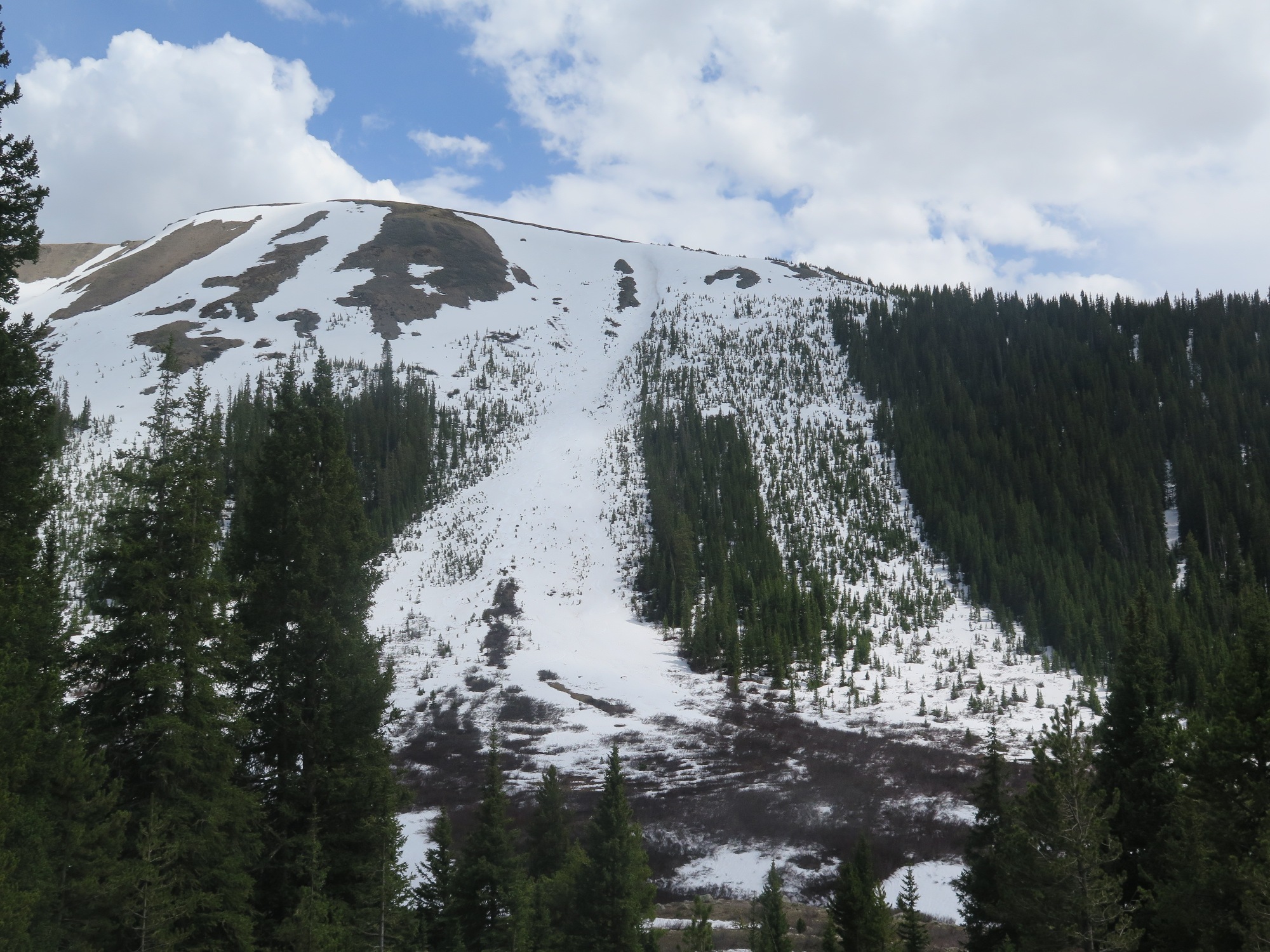 Besides the approach along the Divide from the pass, the other catch is that you have to cross the Roaring Fork to get to the lower road pickup. 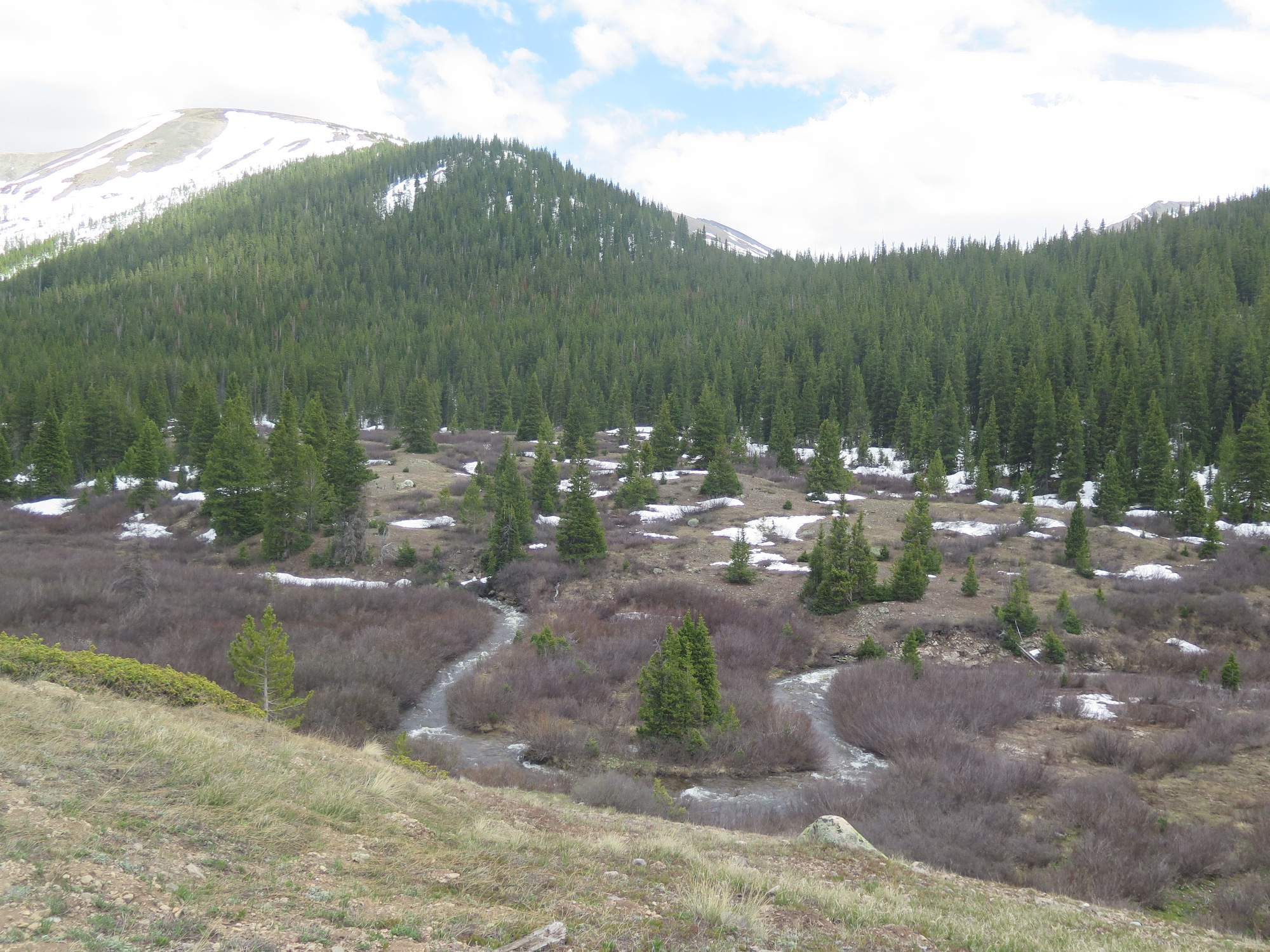 The ghost town of Independence was just a bit farther down the road.

Profile of those ski runs is at left.

I stopped in Aspen to get a takeout sandwich. 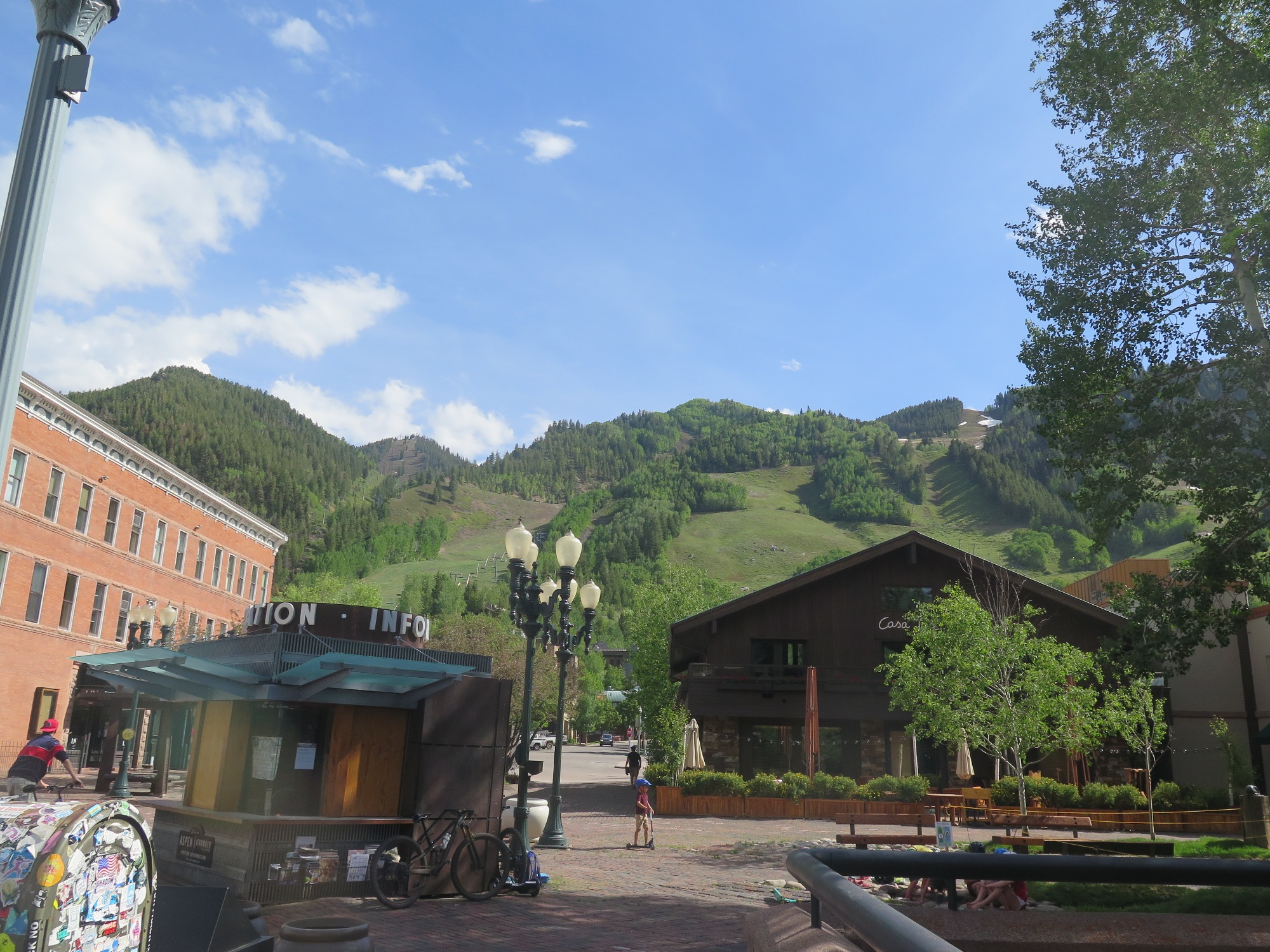 I took the takeout sandwich to the Aspen supercharger, which is in a hotel parking lot near the base of Buttermilk. 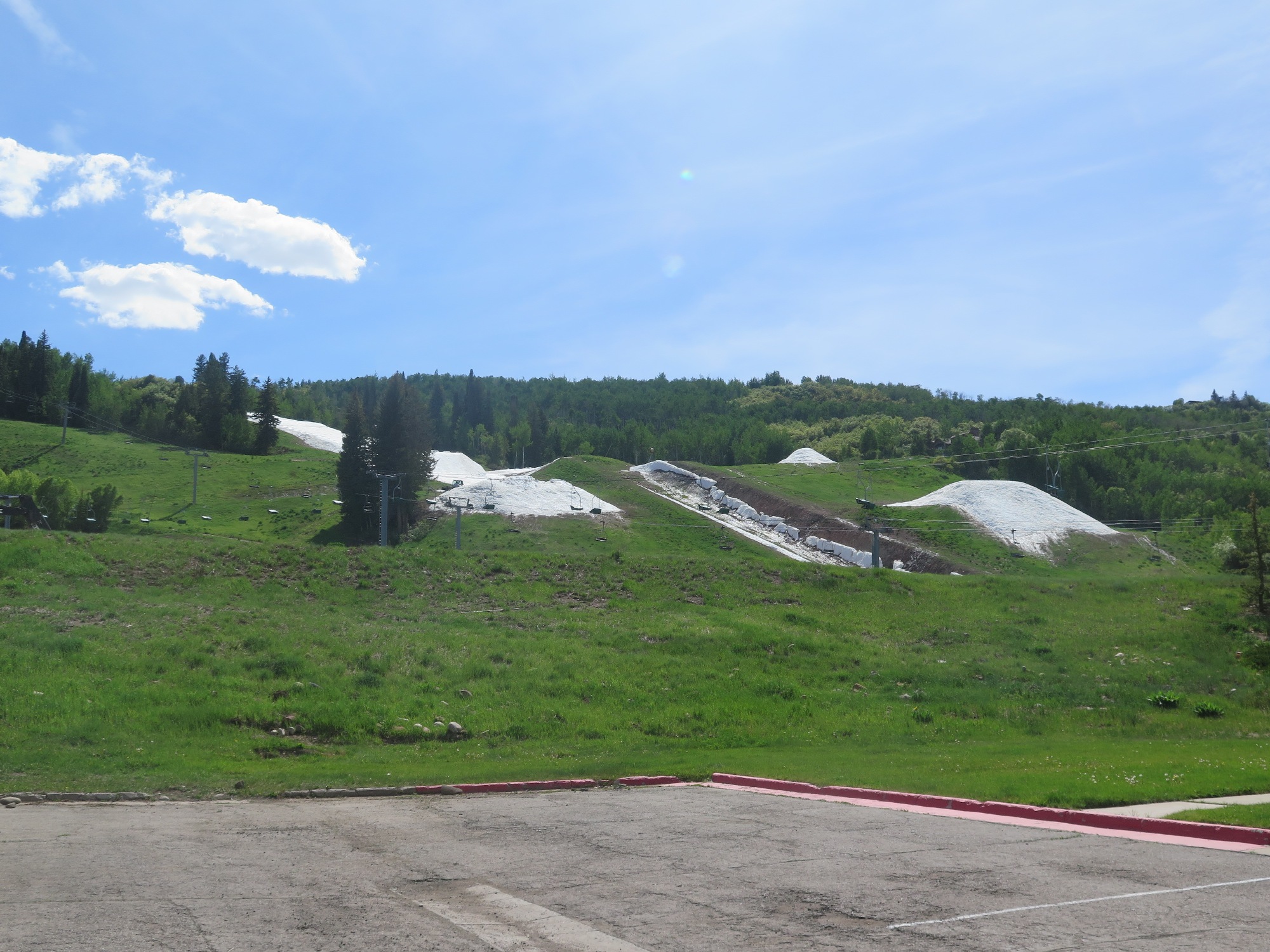 Some of the manmade snow stockpile from the X Games is still there. This explains how Patrick is still finding snow in Quebec in early June.

I got my first shingles vaccine in January with instructions to get the second one between 2 and 6 months later. But California pharmacies were refusing to give vaccines during the lockdown. I brought the paperwork with me and Walgreens in Glenwood Springs was willing to give me that second shot. If Colorado hadn’t allowed it, I’m sure Kansas or Missouri would have in view of the more business-as-usual ambience I observed in those states.

Thanks for the very interesting report..
I assume you drove the Tesla from Cali to Fla.. How did that go? Any range anxiety?