Lake Tahoe 2/19- 2/26 2011
Weather: 100” before we got there, 5 days of sun and 25 degrees, 1 day of wind and no skiing and 4 hours of knee deep before they closed the mountain.
If anyone has ever been to Heavenly, they know it is huge. 4800 acres. We crisscrossed the resort everyday beginning in Nevada at the Stage Coach. We were able to ski to the lift or take the shuttle. Of course I skied down every day. Some days the family joined me. At the end of the day, I would lap the shuttle a couple of times just to get some more powder turns in. We always made it to California, Gunbarrel and back . In between were trees, moguls, groomers, gomers and lots of trees.

All our tracks except the sledders.

They talk about the views at Heavenly, they are awesome:

They talk about the bumps on Gunbarrel and Comet: 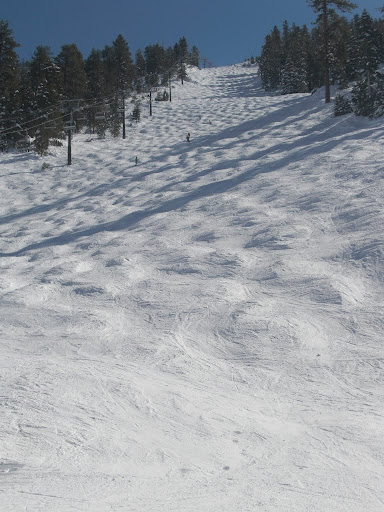 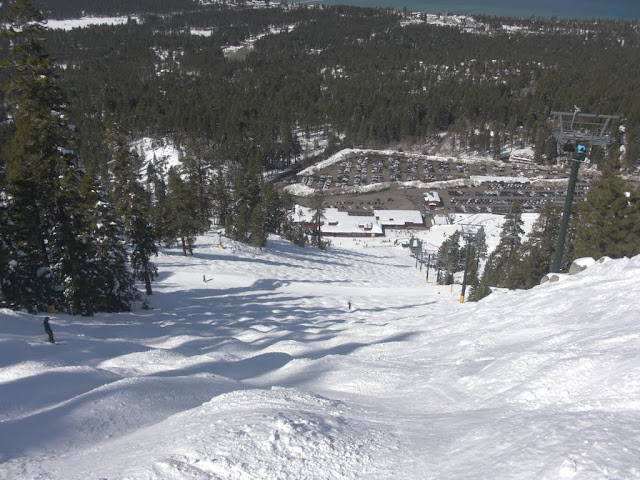 They talk about Mott and Killibrew Canyons 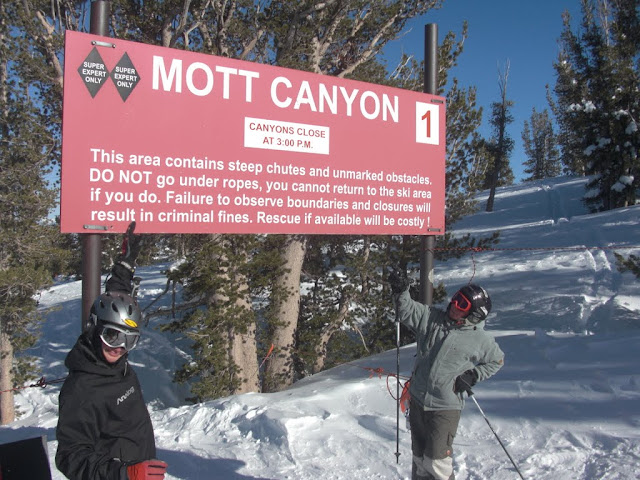 But they don’t mention powder. We were fortunate to hit the storm cycle right. Dry snow for 7 days ending with a bang.

They also had some nice parks:
Shea 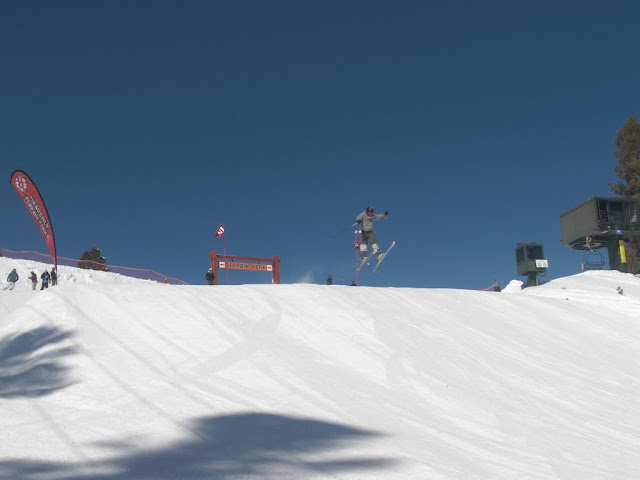 South Lake Tahoe is also great for night life, gambling and food. Its pretty commercial, but the supermarkets were very convenient. We won a little and the kids loved the arcade at Harvey s Casino. We also enjoyed our last night at the Grand Sierra Casino in Reno. $100 for a large room with 2 queens. We gambled and the kids went to the arcade. We won again and had a big dinner only 10 minutes from the airport. On a sad note, our bags were pilfered on the way home and they stole my wife's jewelry satchel.


My wife took an unexpected trip to the bottom of the Nevada side. She "accidently" skied beyond the boundary ropes in Killibrew Canyon and eventually landed in Gardnerville with my 11 year old. Read her story below.


Today we all decided to ski the peak of Heavenly and headed for the Killibrew Canyon. The skiing is AMAZING! This has been a banner week for snow fall. After no snow for 7 week totals of 104" inches have accumulated in the past few days. Needless to say the condition have exceeded our expectations. Knee deep and ROCKING. We all skied the boundary line which had very little skier traffic. The rope clearly marked the permitted terrain. We paired off - Shea and Alan, Spencer and me to be safe and make sure we kept account of each other.

There is an old saying..."The mountains are as cold and as dangerous today, as they 200 years ago".

Spencer and I hugged the boundary sign/rope, but gave in to temptation and ducked underneath. We creamed in delight as the snow shot up and hit our faces through the tress. WOW! AMAZING! In about 200 feet, we realized that we had lost Alan and Shea, but felt little worries...we would continue down and sooner or later we would hit a trail. Sooner or later...Sooner or later...we made it to another ridge - wow. There weren't anymore ski tracks...we were alone. I felt somewhat comforted because I could see a power line. We made it to canyon which involved a hike over rock. I began to worry because if one of a lost a ski, we would be in serious trouble and possible the stars of some E channel/History channel TV show. We scaled some ridges, made it over so rocky cravasse and came to yet another bowl. All the while we made beautiful turns in knee deep snow thinking that if we were going to freeze/die at least it would be good on the way out.

Mercifully, we stumbled across 2 skiers! These 2 young guys had no idea where they were and had made the same mistake as us. The 4 of followed a run out for about 2 miles and made it to a highway. The only thing here were some beautiful homes that must have been owned by gazillionaires or movie stars. One of the guys called his wife who said she would pick them up - which didn't mean much because we had no idea where we were. He then told Spencer and I he didn't think we would fit in his car. OMG! Could you image - we would not fit in their car!

I put my thumb up on the highway for about 10 minutes and realized that no one was going to stop for us with our skis. I looked at the million dollar homes and realized that they were protected by a barb wire fence and a gate. I really had no choice...I climbed the 4 foot gate (in my ski boots!) In my sight I saw a young beautiful blonde woman. I was hoping she would give me the name of a cab company. After the schlog though the yards I found the woman. I asked her the name of a cab company. She was AMAZING! She laughed and told us there was no such thing, and that the walk back to Heavenly was about 15 miles. She got her infant, grabbed a couple bottles of water, and drove us back in her Lexus. I made sure to wave and smile to the guys in the road (who are probably still there!)

A miracle! What a start to a vacation. I'm sorry that Alan and Shea were not there to share this adventure with us. When I'm an old woman and Spencer is a grown up, we will still be laughing and smiling about this story.

What an incredible story! That's such a bummer to get stranded in the middle of nowhere in Tahoe. How strange that they wouldn't help you. At least the snow sounded like it was great and like you said, you'll remember this forever. Heavenly is definitely an awesome place to ski with some of the greatest views in America. If you ever go back to Heavenly, I would check out http://snow.to/p4C2G which has a ton of great stories on the resort like yours.
You must log in or register to reply here.
Share:
Facebook Twitter Reddit Pinterest Tumblr WhatsApp Email Share Link
Top