Staff member
The Onion River is perhaps the best known around Lutsen for canyoneering. From the trailhead it's about half a mile walk to the river. Though overcast it was in the 30's and everyone dumped clothing layers before we got to the river. We passed a winter campsite where Susan Staples ducked into the snow cave the campers built. 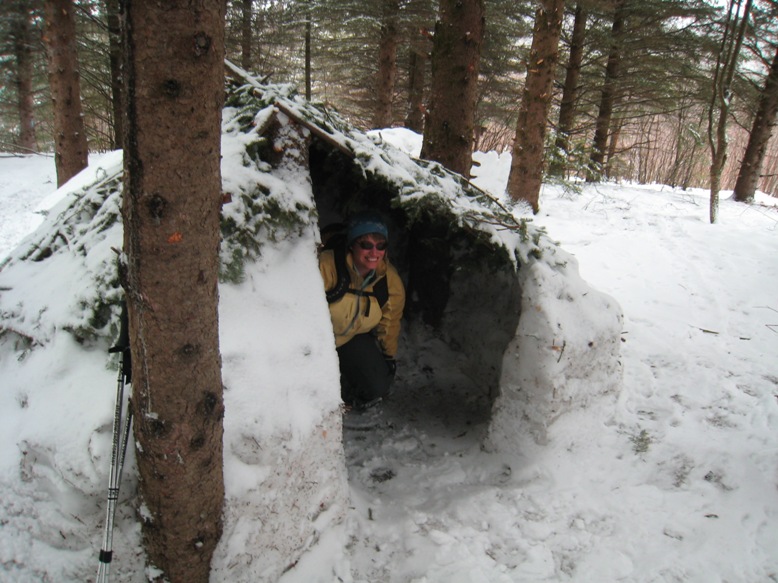 Walking around the holes in the upper part of the Onion River. The river is usually shallow, so if you break through it tends to be knee deep or so. If it's too deep to step out they tell you to dip your arms in the water, then put them over the edge where they will now stick to the snow or ice. Then the guides will use ropes to get you out. On the NASJA officers' scout trips a couple of them did fall in waist deep sections. 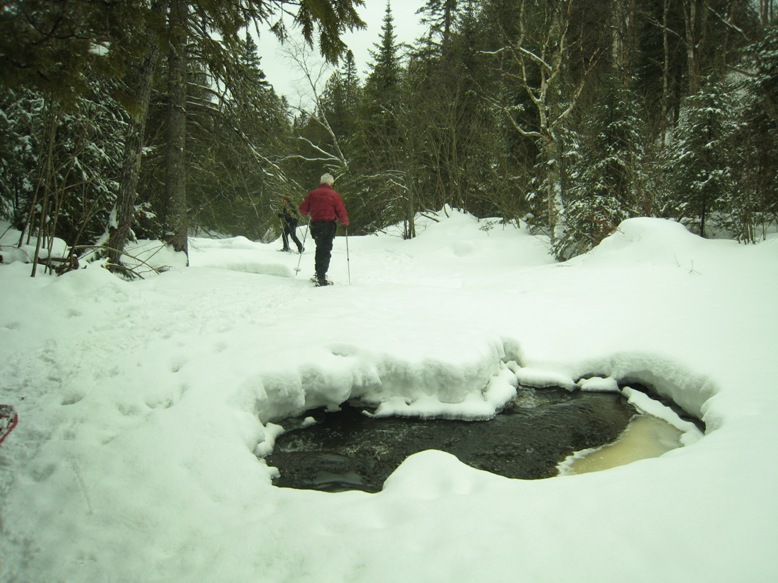 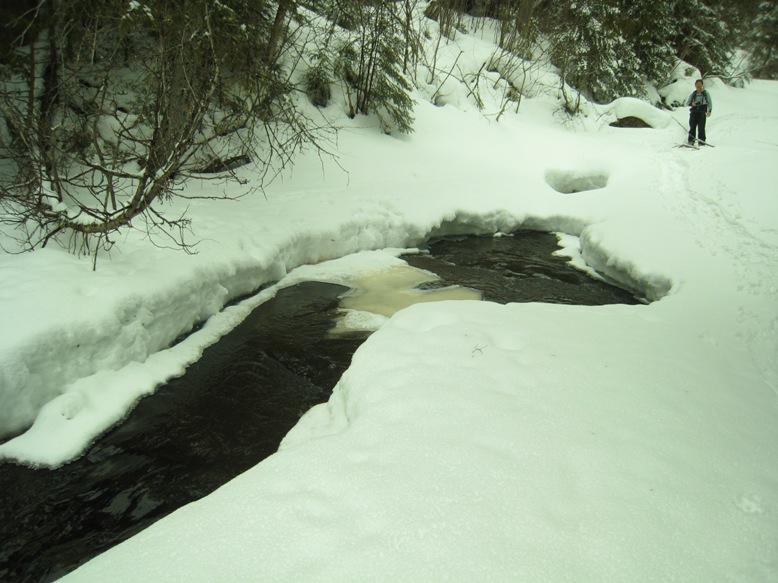 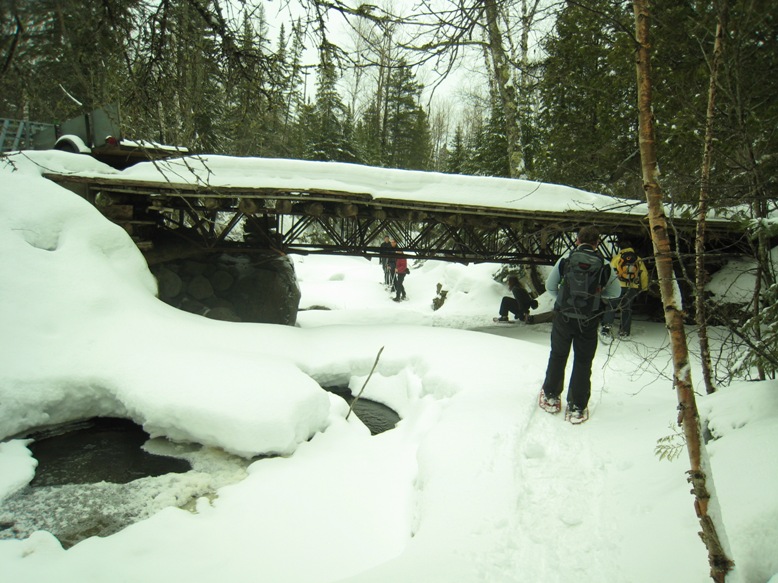 In narrow areas or near holes we observed safety protocol by walking past potential weak spots one at a time. Sort of like skiing the Birthday Chutes. 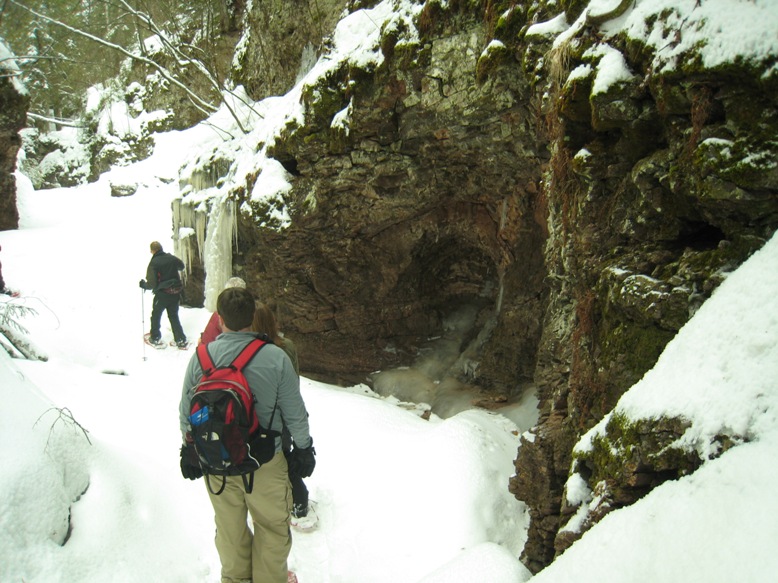 I took a long stride over a depressed spot here and broke this hole into the river. My momentum carried me across without even getting a foot wet, but Susan and Scott Staples had to hug the wall to get around the hole I opened. 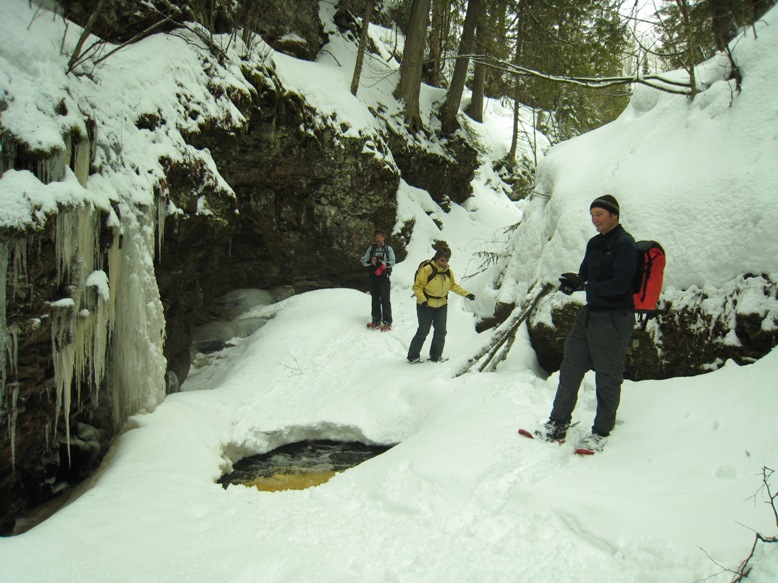 Entering a narrow part of the Onion River canyon 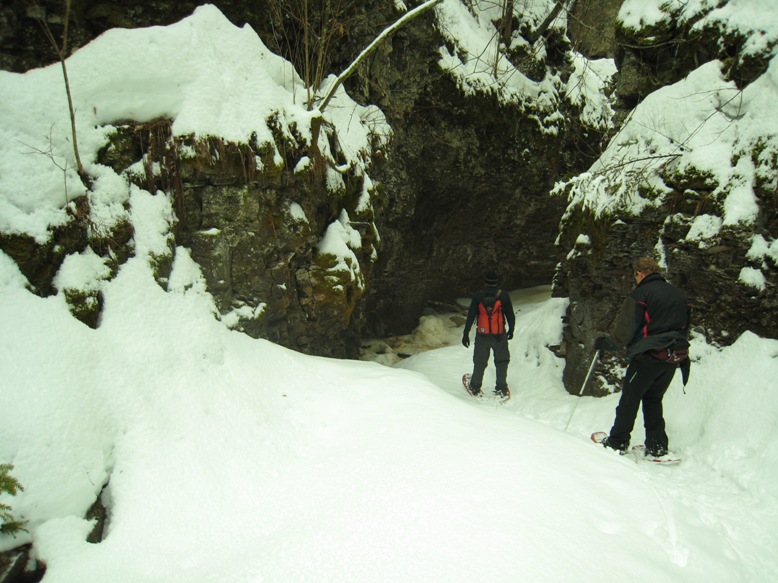 Here we had to step on a rock in the river. Fortunately the snowshoe crampons grip the slick rock much better than bare feet or river shoes during summer river crossings. 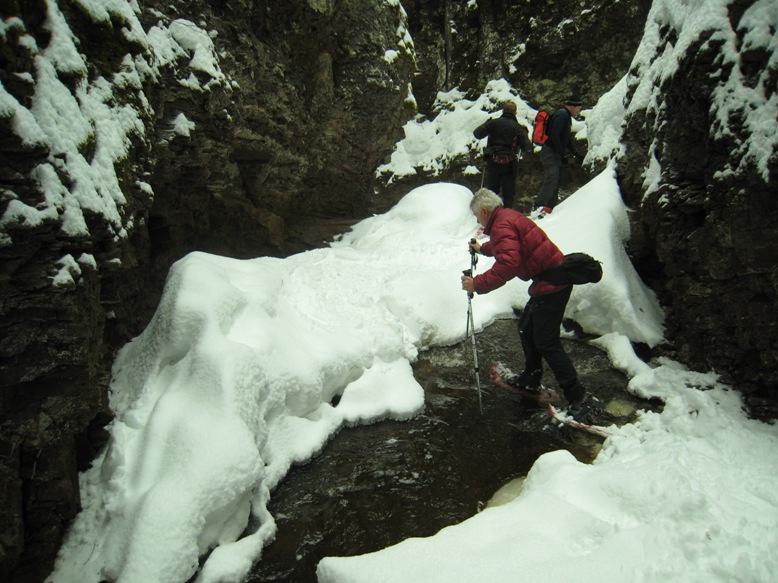 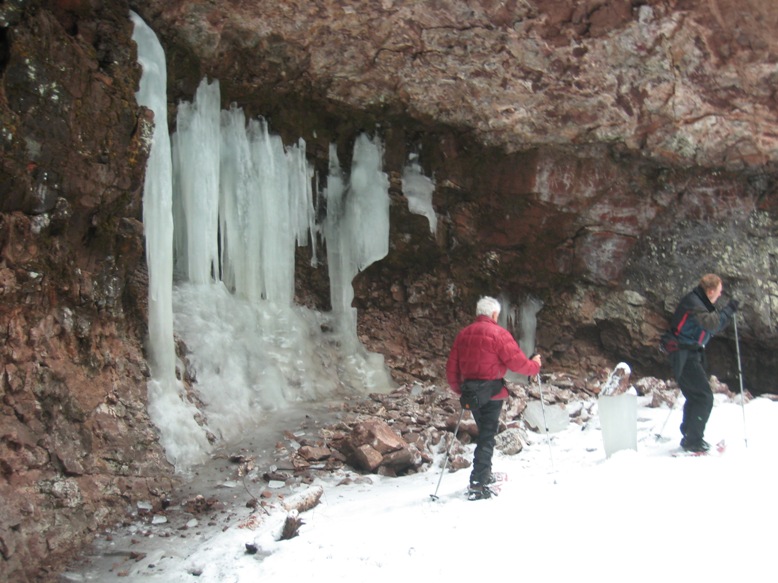 Lower down the canyon opens up again 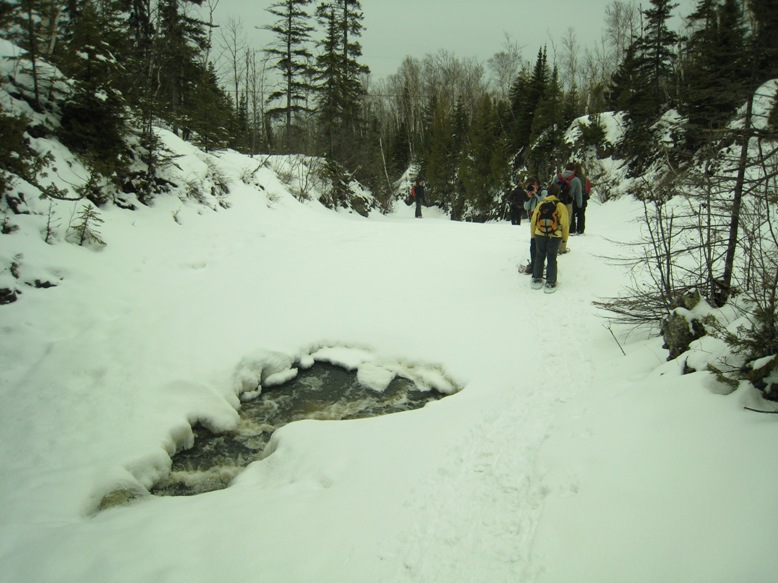 Finally Lake Superior comes into view. There's a dropoff below the second pool which is a cascading waterfall in summer, so we exited here and hiked along the rim for a while. 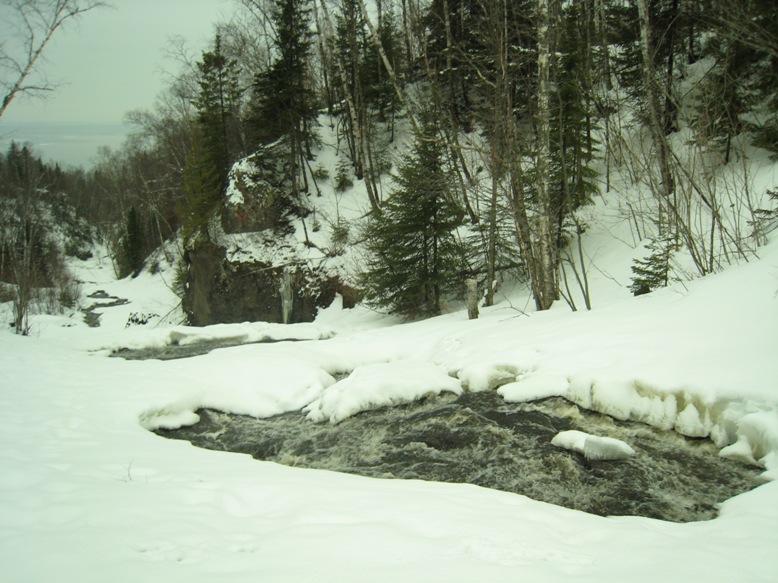 Back in the canyon, the Onion River is funneled under the road. Solid ice walking through the tunnel. 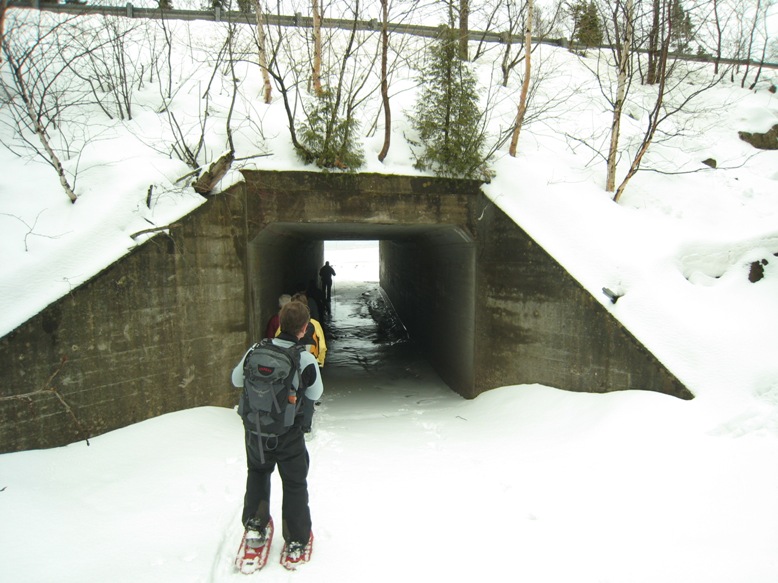 End of the Onion River at Lake Superior shoreline 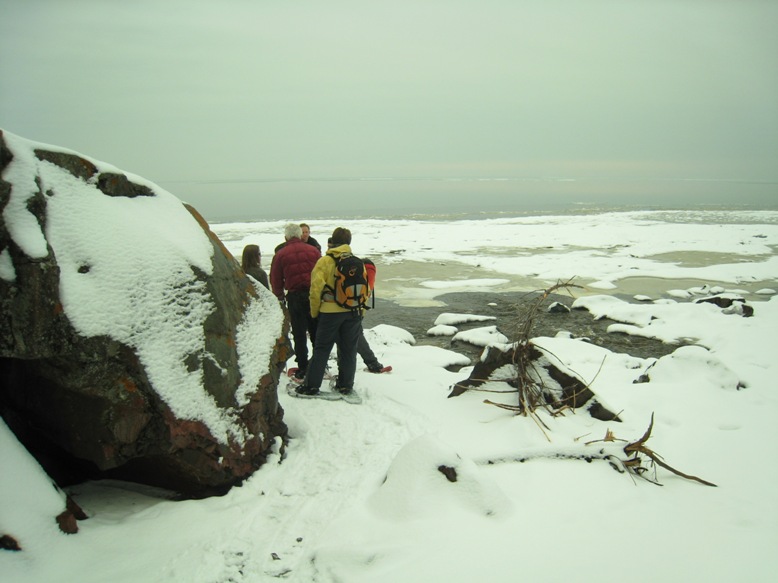