Staff member
We returned to Mammoth during a stretch of unsettled weather that worked out far better than two weeks ago. The current series of small storms, while not light and dry, do not have high snow levels and mixed precipitation at Mammoth. The first storm was only 3.5 inches at the patrol site, but there were some rave reviews about Saturday’s skiing. The next wave came with 1.5 inches reported Monday morning. Rainbow Jenny reported a “dust-on-crust” start but improving conditions as it snowed through the day Monday.

We drove Monday afternoon inn high winds nearly all the way and by the time we got to Mammoth it was cloudy but not snowing there.

Tuesday dawned calm and sunny and we got on the hill at 8:45. We were pleased to see winter snow on the groomers right to the base of Stump. 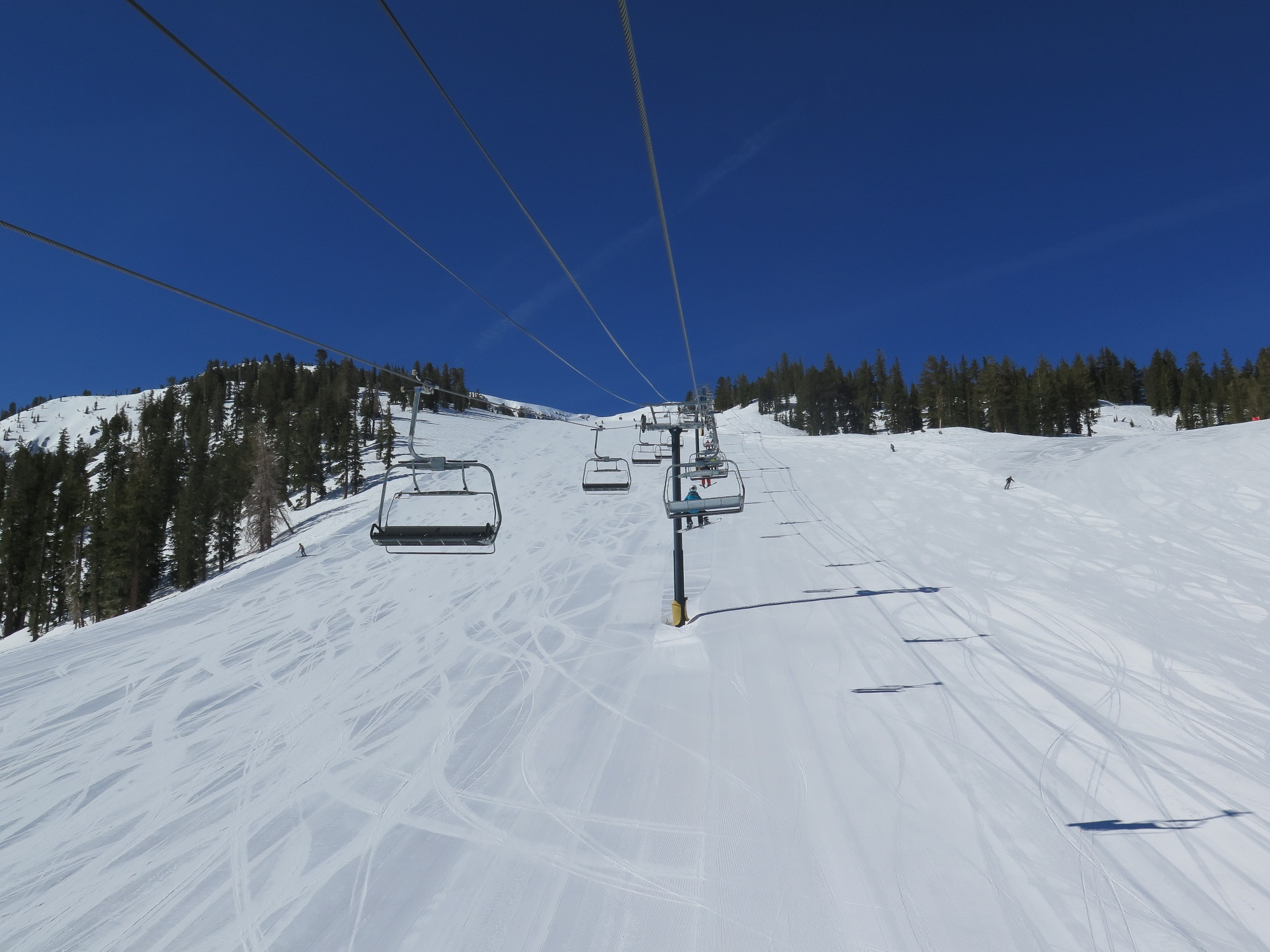 I wanted to get up top but the upper gondola was stopping a lot despite no wind. We ran a couple of laps off the back of 3 toward chair 5, first in Dry Creek. 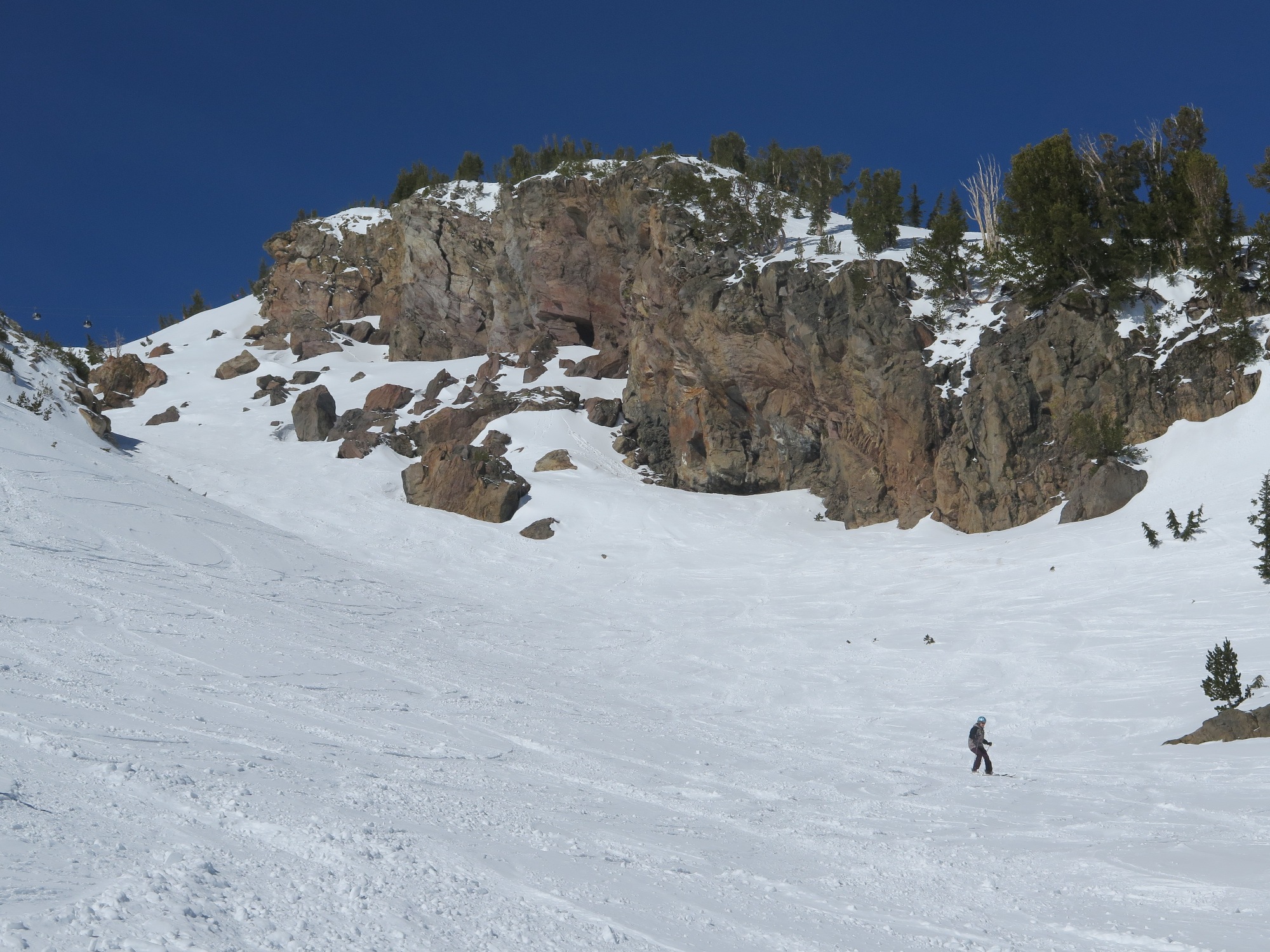 Next time we pushed farther east toward Sanctuary. 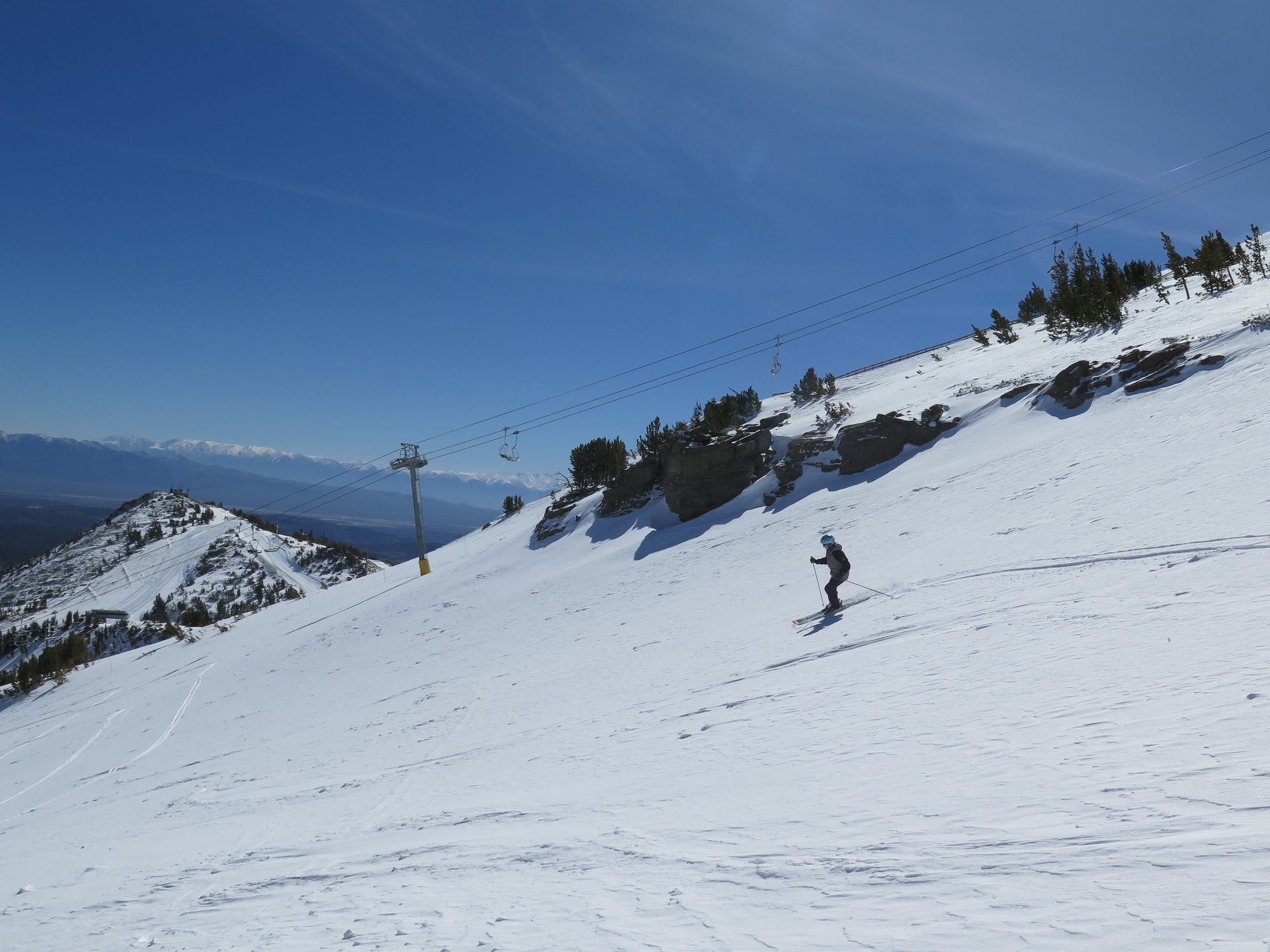 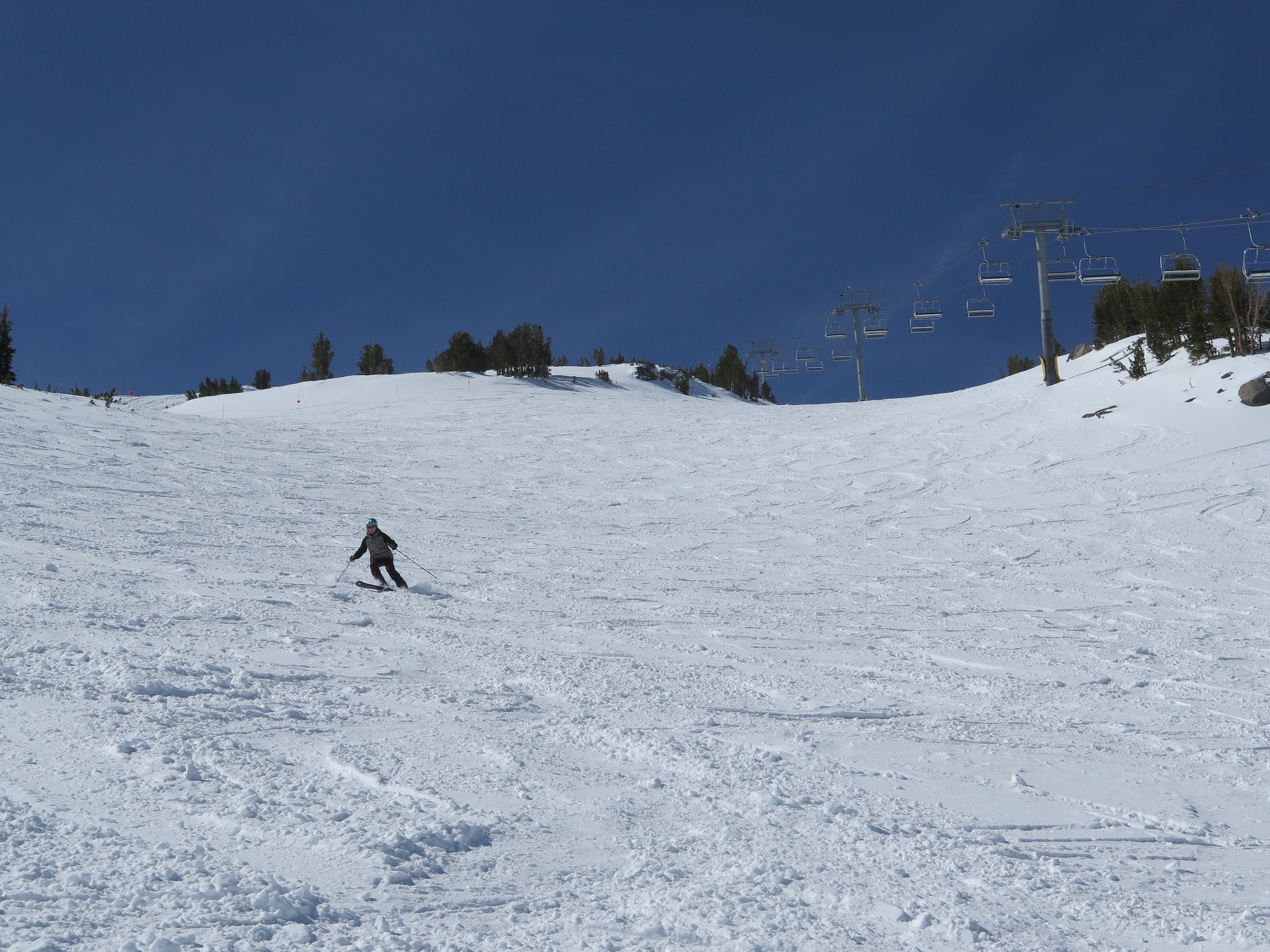 It was roped off beyond that as huge jumps are being built for an upcoming competition/photo shoot: more about that Wednesday. Lower ungroomed snow still had a variable subsurface, but you could find quite a few spots on the faces of 3 and 5 that were mostly new snow.

Our first top run was Dave’s. New snow was deeper but wind deposition was uneven so maybe 1/3 of turns hit the subsurface. Next run on Climax was all good, almost no contact with old snow. 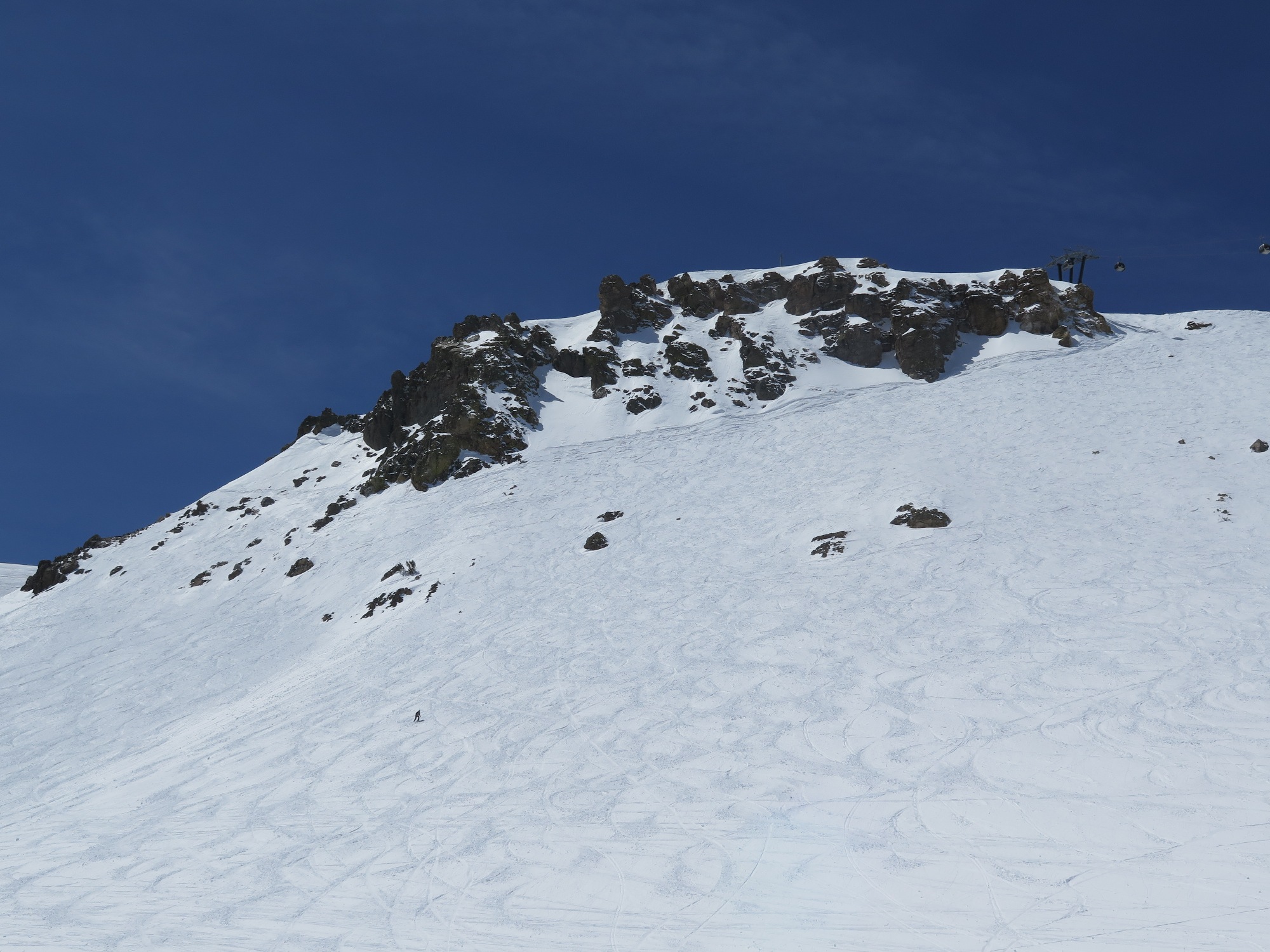 It’s hard to call it powder as the skis only sank an inch or so into the new snow, but it was soft and easy to ski fluidly top to bottom. Riding the gondola I saw someone in Hangman’s so I gave that a try. 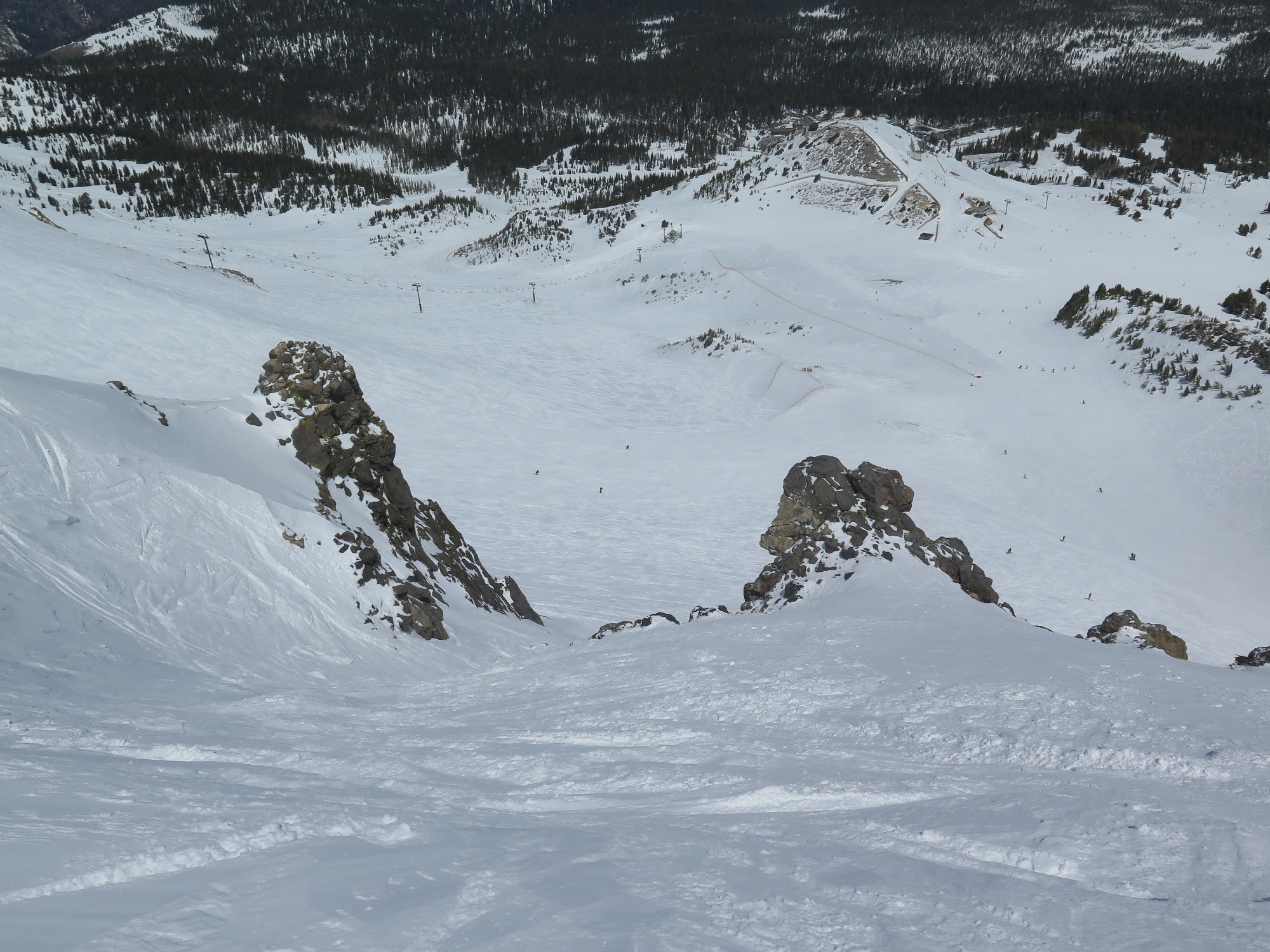 There was a line of small rocks blocking the throat two weeks ago but most were covered now. I sideslipped to the one remaining and turned around it into excellent snow on the apron below. 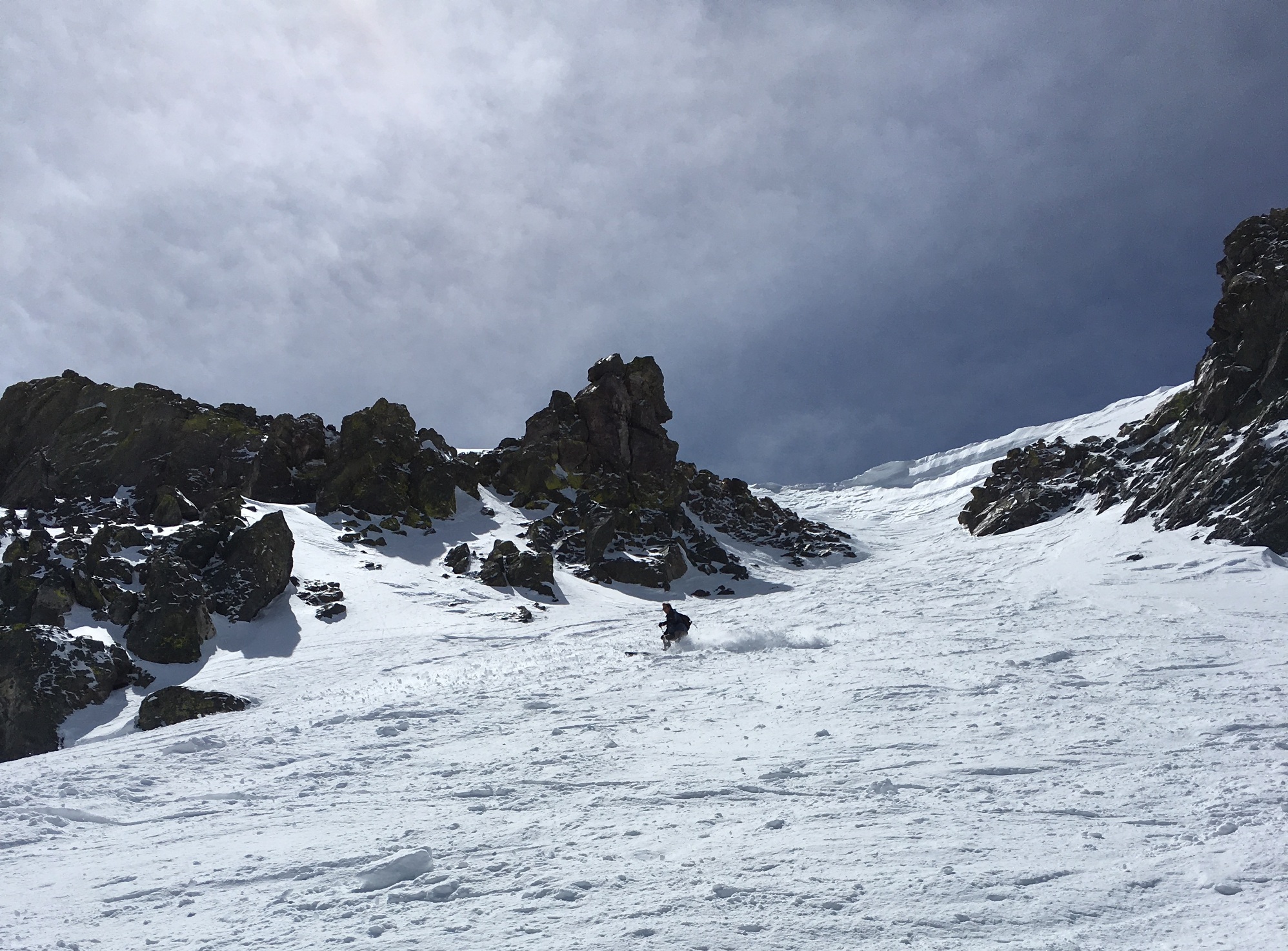 After an encore on Climax and down through 5 we took Roadrunner around toward Scotty’s. Midweek, chair 23 does not run, nor do 4 and 12. So in some cases it can be better to ski late season at Mammoth on weekends. But with the new snow we were probably better off being there on Tuesday and a couple of the locals said it was better than Saturday. While Liz skied Scotty’s, I carried momentum to get up towards the Paranoids. The top entries were a bit variable and windstripped, but once a few turns into P2 it was all soft like Climax. 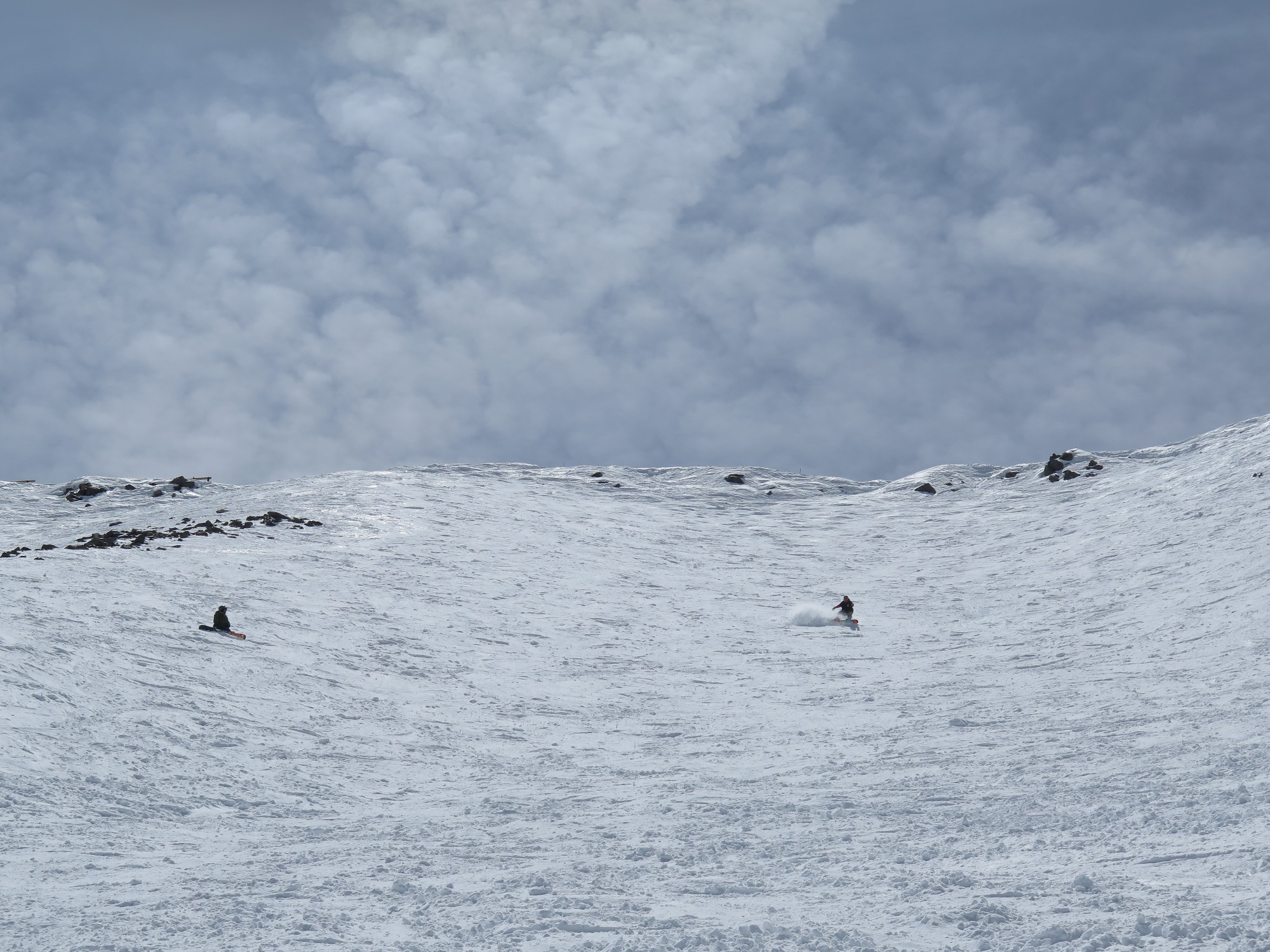 I observed a group of snowboarders poking their way into firm and sketchy entries to P3 & P4. 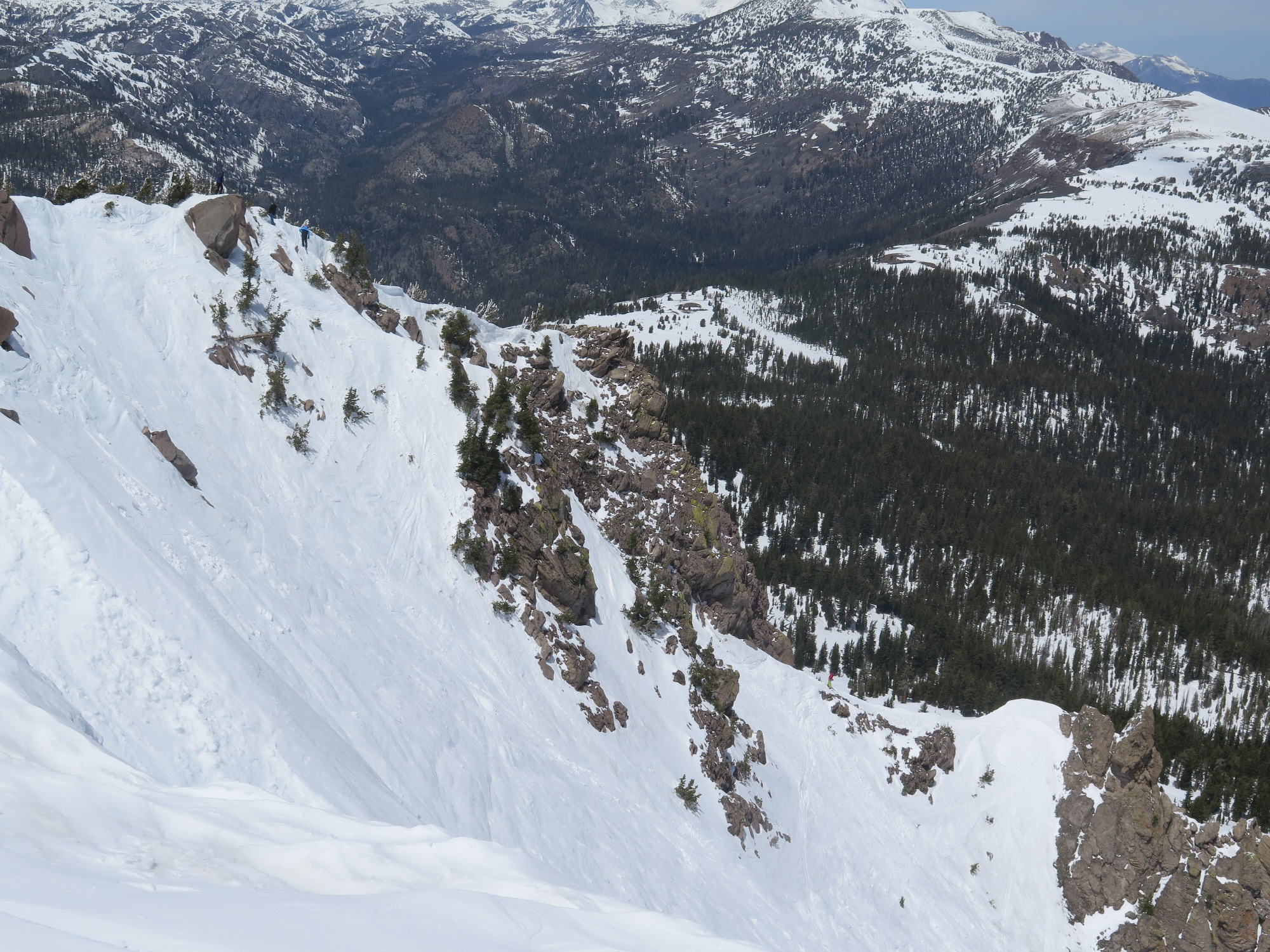 Lower down, looking back through the rocks between P2 and P3 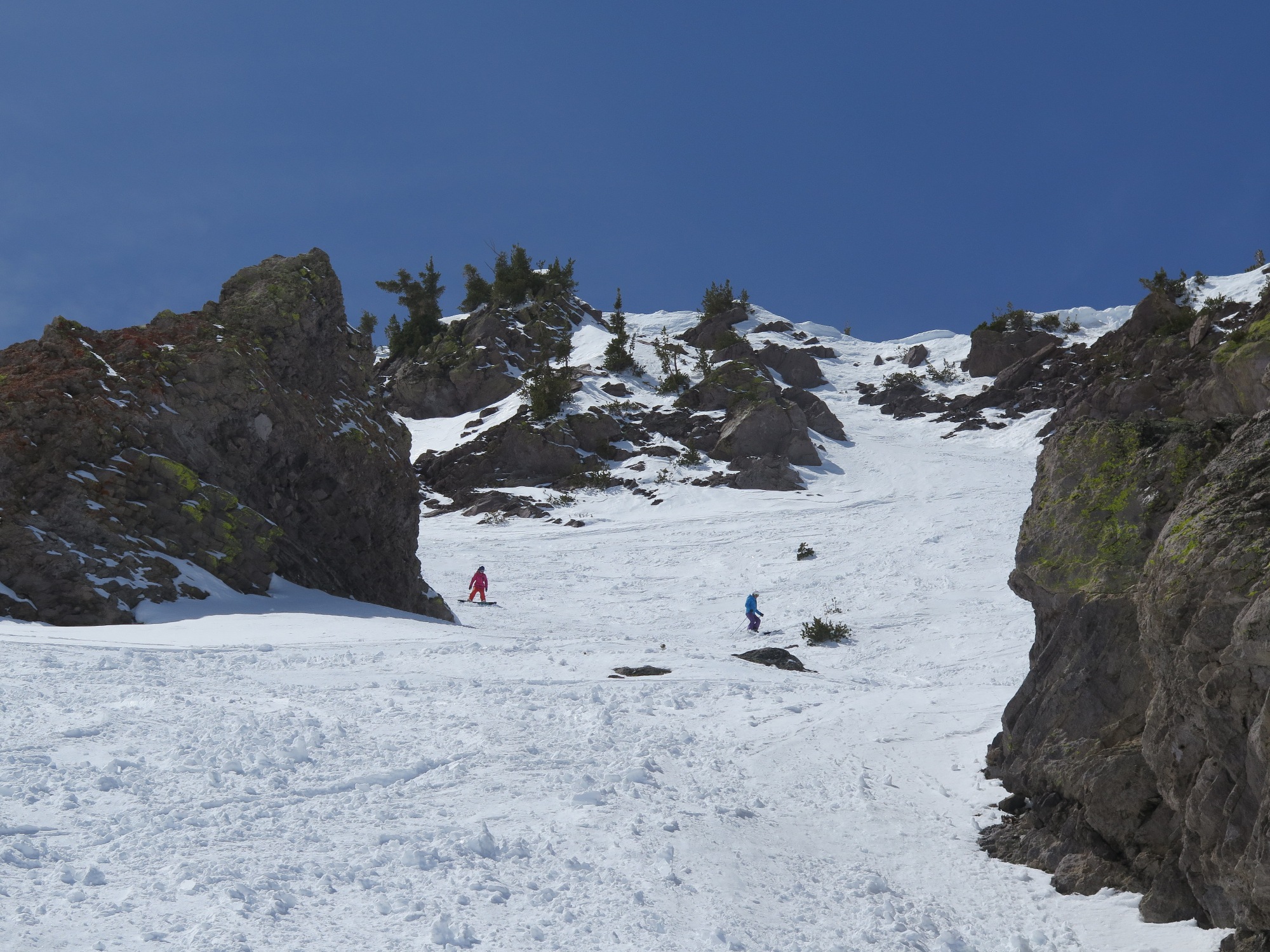 As usual I was looking for the best snow, which it turned out was yet to come. Once I cleared the rocks below P3 I followed a well defined traverse left past Philippe’s. This led to White Bark Bowl, which held very lightly tracked powder. 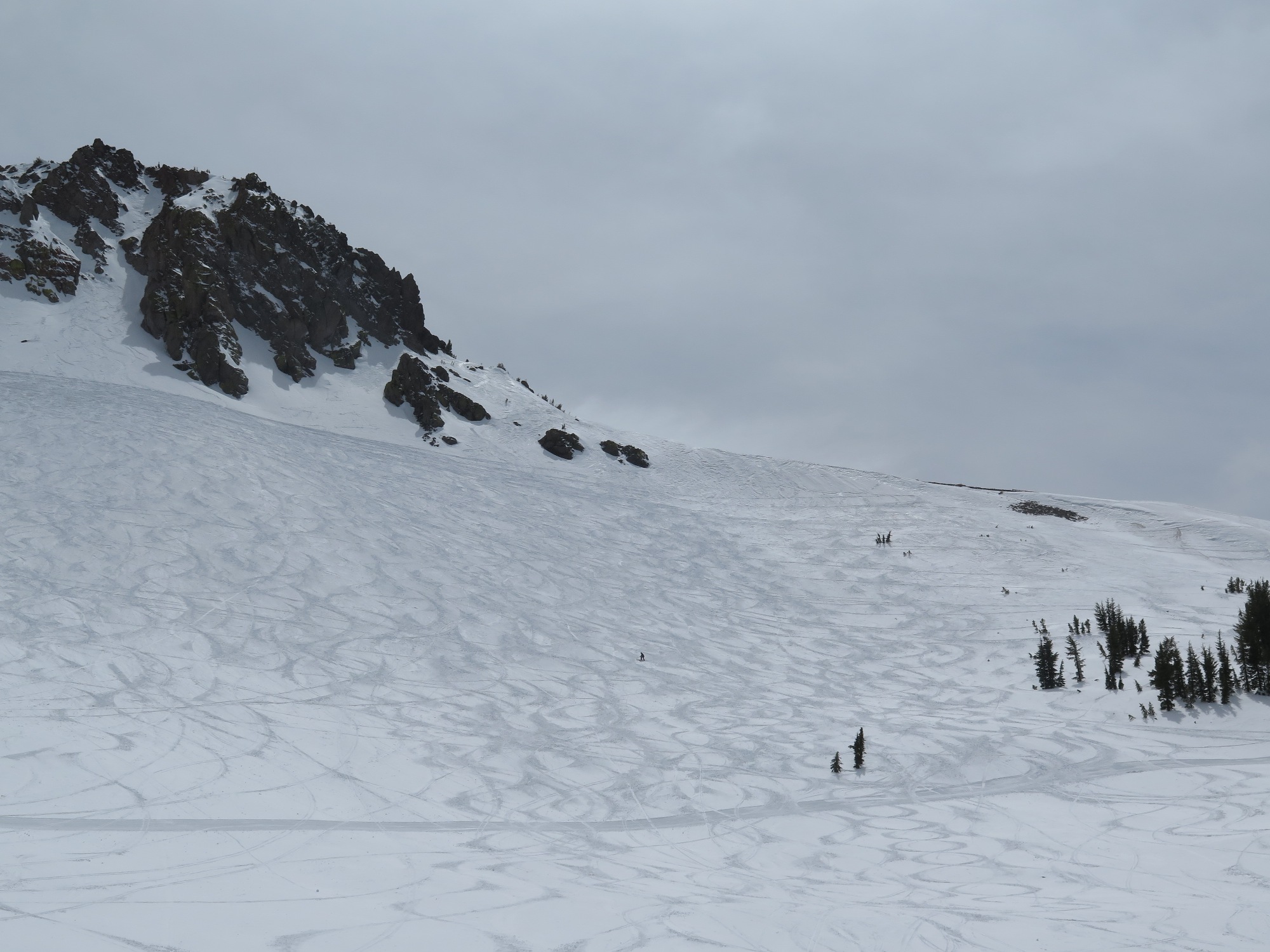 Liz and I regrouped at the bottom gondola, returned to the top. It was now 1:30 and I thought worth a run off the backside. Snow was a cream cheese consistency with not much crusty subsurface after several hours of sun. 14 was closed so we followed lower Roadrunner around past 12 to Main and another gondola lap of Monument/Scotty’s. 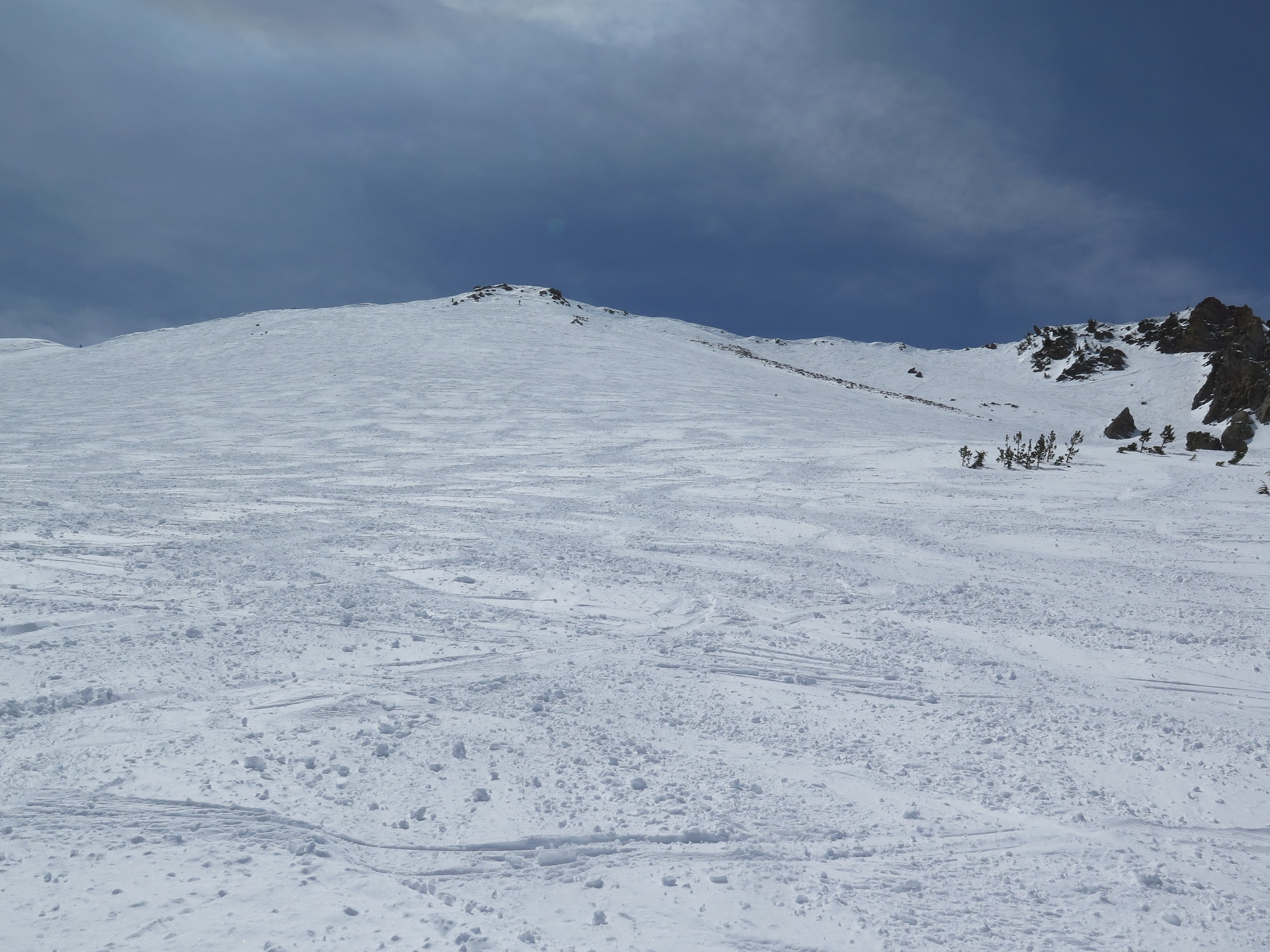 The next time up top I coaxed Liz into a firm traverse across the firm upper Monument to P1. 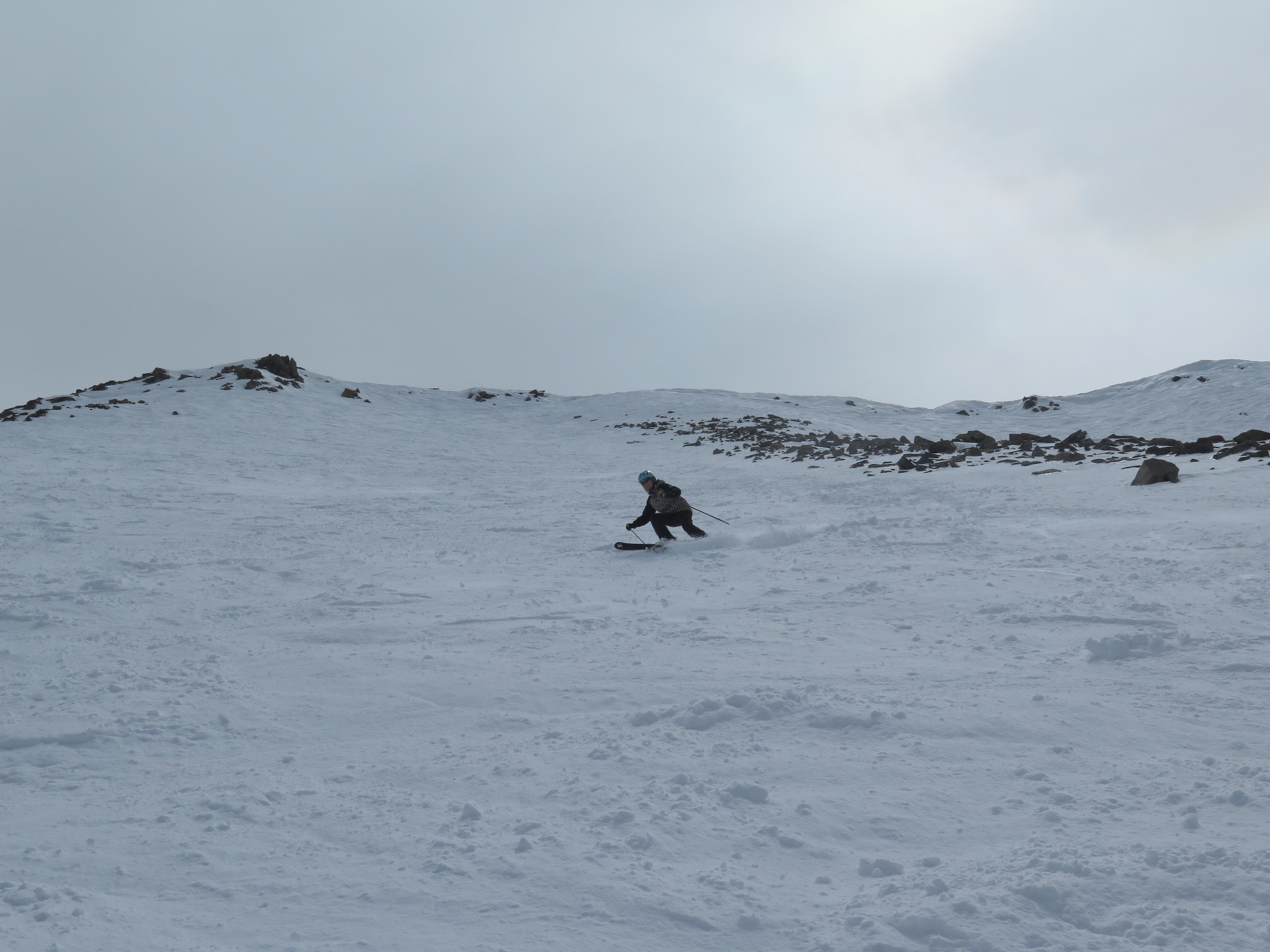 She was glad I did especially after another traverse out to White Bark Bowl. 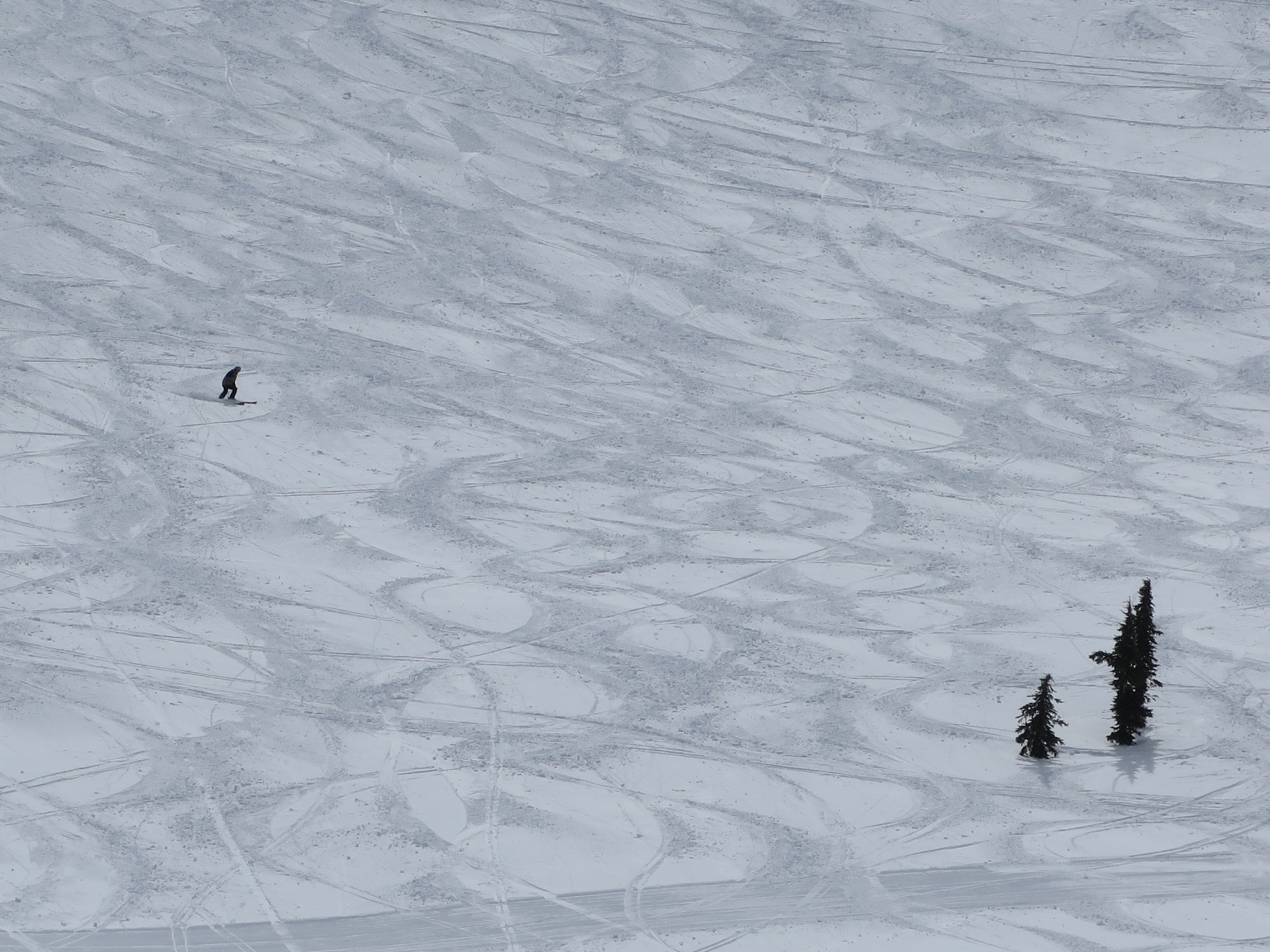 Finally after 2PM there was some wind and high cloud.

It was now almost 2:30 so Liz skied to the Mill for Tuesday tacos as we had skipped lunch due the stellar conditions. I went back up top, found a soft line down skier’s right of P3 and a last shot at White Bark Bowl. For my final lap on top I skied past Cornice across another firm traverse to the face under Drop Out 3. This area had smooth windbuff rather than the softer snow of Climax and the Paranoids.

With the clear and calm morning, snow on the lower mountain and non-north exposures had softened. Afternoon runouts on St. Anton were smooth corn as were the race course runs which I skied after 3PM. Gravy Chute was the last refuge of winter snow on the lower mountain. For my last run I rode 3 to ski Coyote down to the Mill and get some tacos Liz had saved for me. Some snow at the top of 3 had refrozen by 3:30 but Coyote itself was still corn. I finished with 31,500, overall best Mammoth day of 2015-16 for me in both quantity and quality.

Liz skied 24K and for the first time this season had no ankle pain from her boots. Corti Lawrence’s numerous tweaks at Footloose at the may have turned the corner for Liz’ boot comfort. Admin will be pleased to hear that Corti removed a rivet from the back of Liz’ boots, which reduces flex from 110 to 100.

The next weather system was predicted to come in Wednesday/Thursday with perhaps 4-7 inches more snow. We had low expectations for Wednesday as winter snow remained on perhaps on 20% of Mammoth at the end of Tuesday, and that terrain might not be accessible if weather were too severe. But again we got lucky with the day’s weather developments. We got on the hill just before 9AM with a stiff wind in our faces on chair 2 and Stump Alley solidly frozen beneath us. So we took our warmups on face and back of 3 where snow was firm but much better than lower down.

It was mostly cloudy and some of the clouds were on the upper mountain. Riding the gondola a patroller told us about the upcoming construction activity past the ropes on chair 5. Five park building companies have been invited to build features for a competition to be held over the next week at Mammoth. I figured we could get out there for a closer look, but unfortunately the cloud was embedded on that side of the mountain. I could also see that wind had reloaded some snow on Climax below me so I tried that. The windsift snow was good but not quite deep enough so I had to control speed turning in the stiffened subsurface from the prior day. Meanwhile Liz skied Cornice with a rave review of windsift over grooming, so we both did that next.

Next time up the cloud had lifted some but still remained over Dave’s Run, so I ventured into Hangman’s again. The windsift was deep there so I made turns above and through the throat this time. I got a bit of a thrill as the snow started sluffing right in the throat and I felt the small buried rock that I had turned around the day before. Below the throat was great windsift skiing though I stopped a couple of times to avoid turning into my sluff.

Finally the cloud lifted high so we headed over towards Dave’s. Per the patroller’s advice we passed Dave’s and skied the mellower Roma’s to far skier’s right where the windsift was deeper. We ducked the rope at the top of Gold Hill and took pics of the impressive park construction. 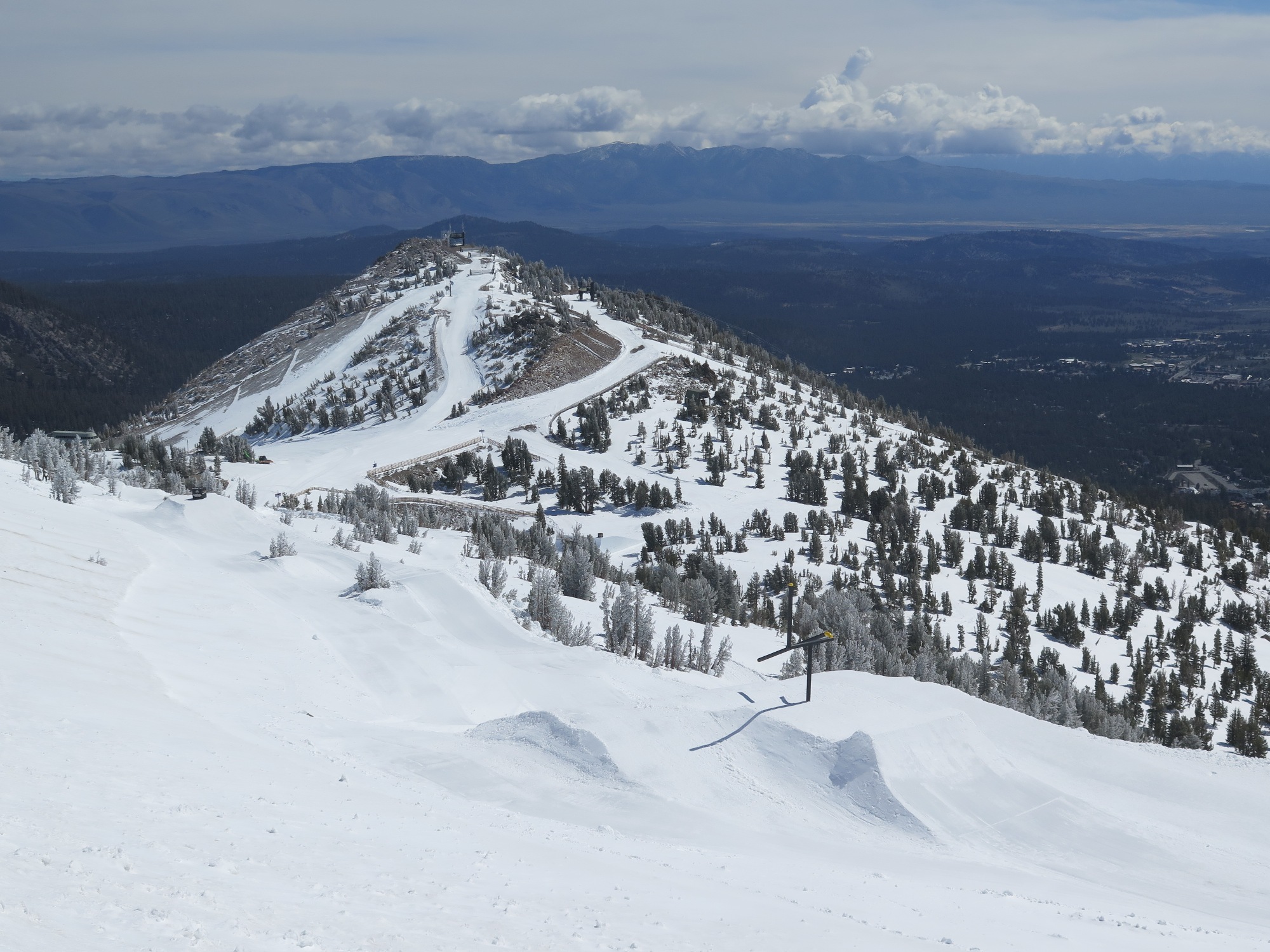 The cat driver yelled at us to no surprise so we quickly took the cat road into the middle of Solitude for the next round of pics. 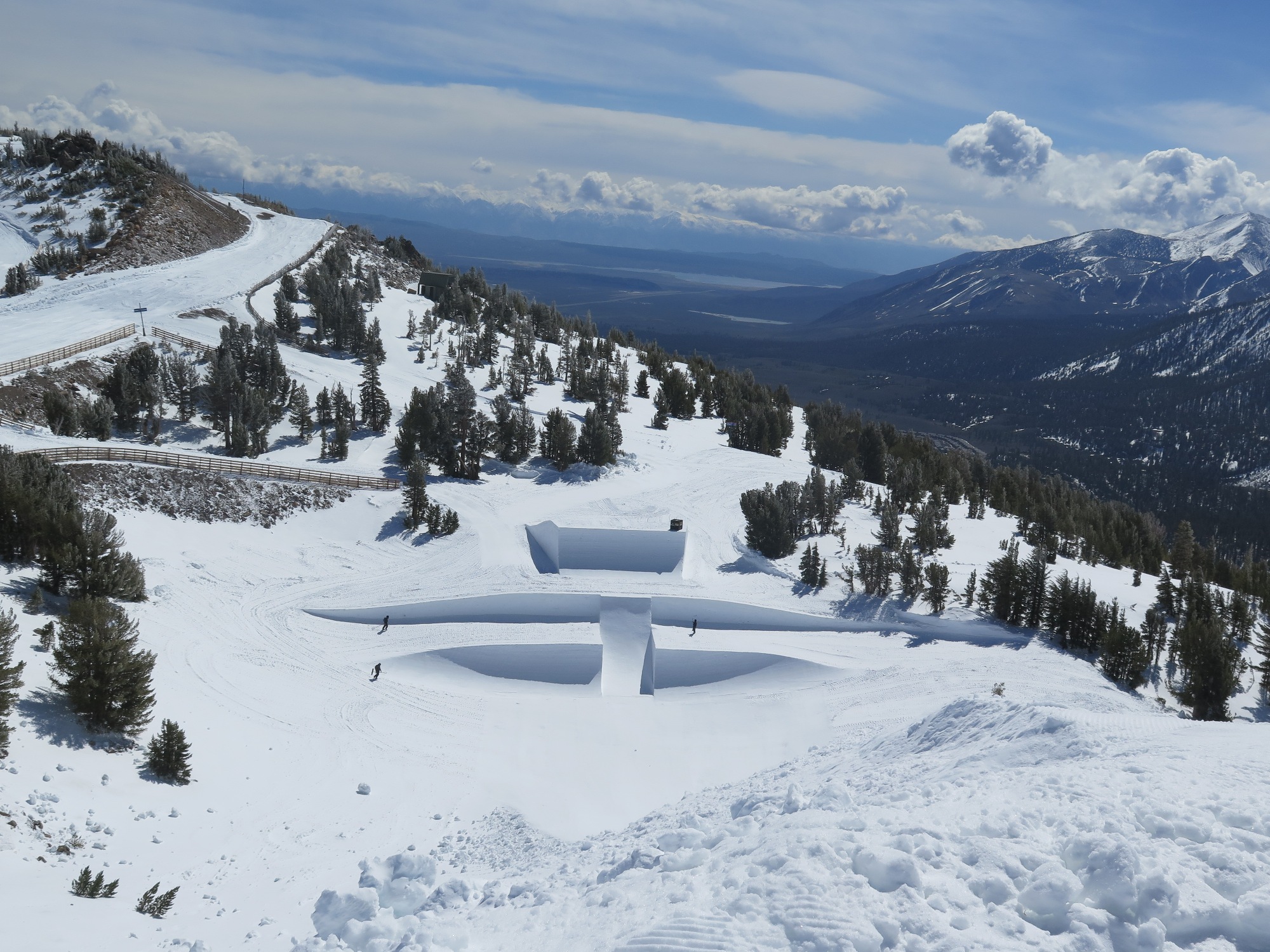 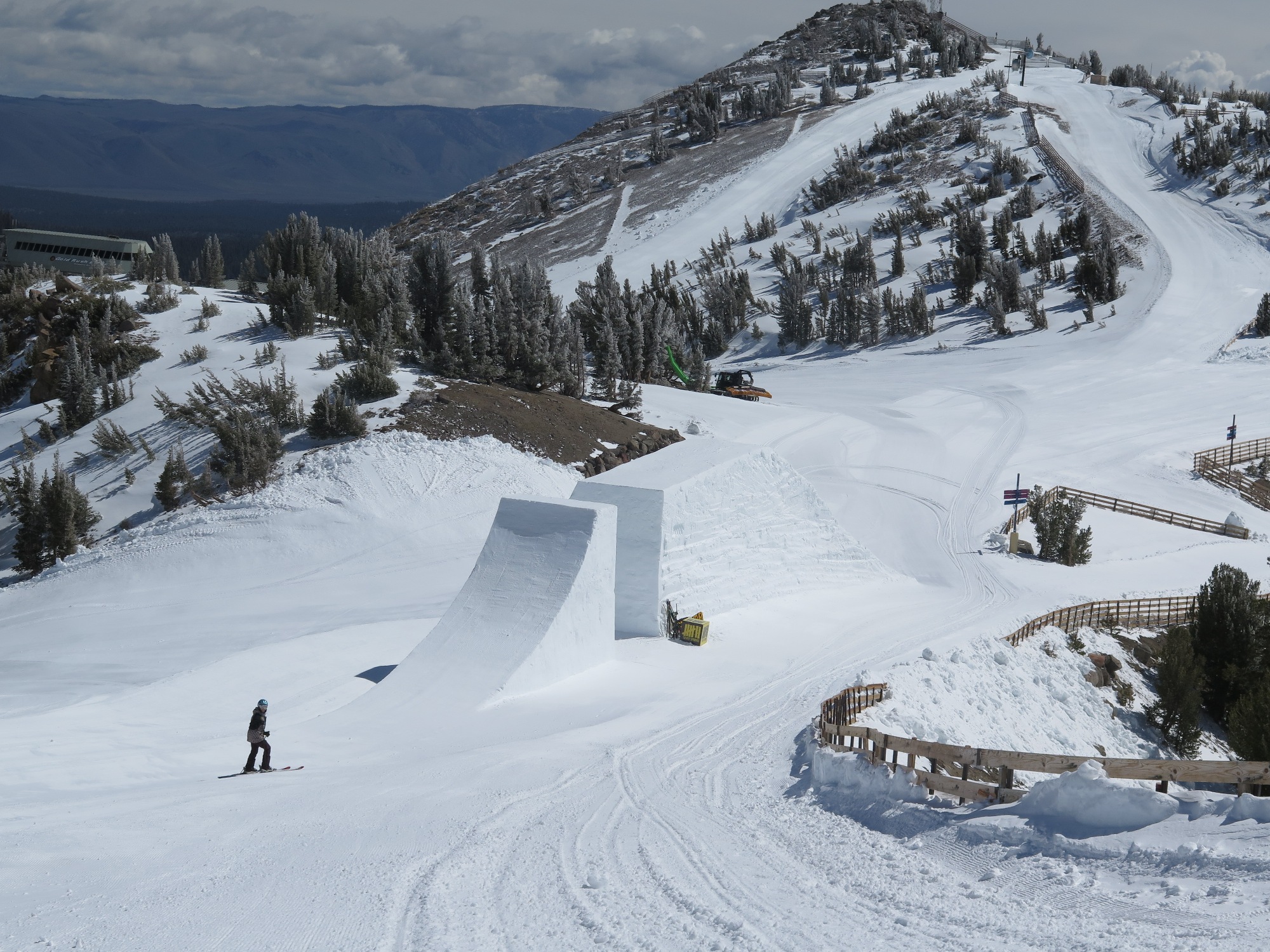 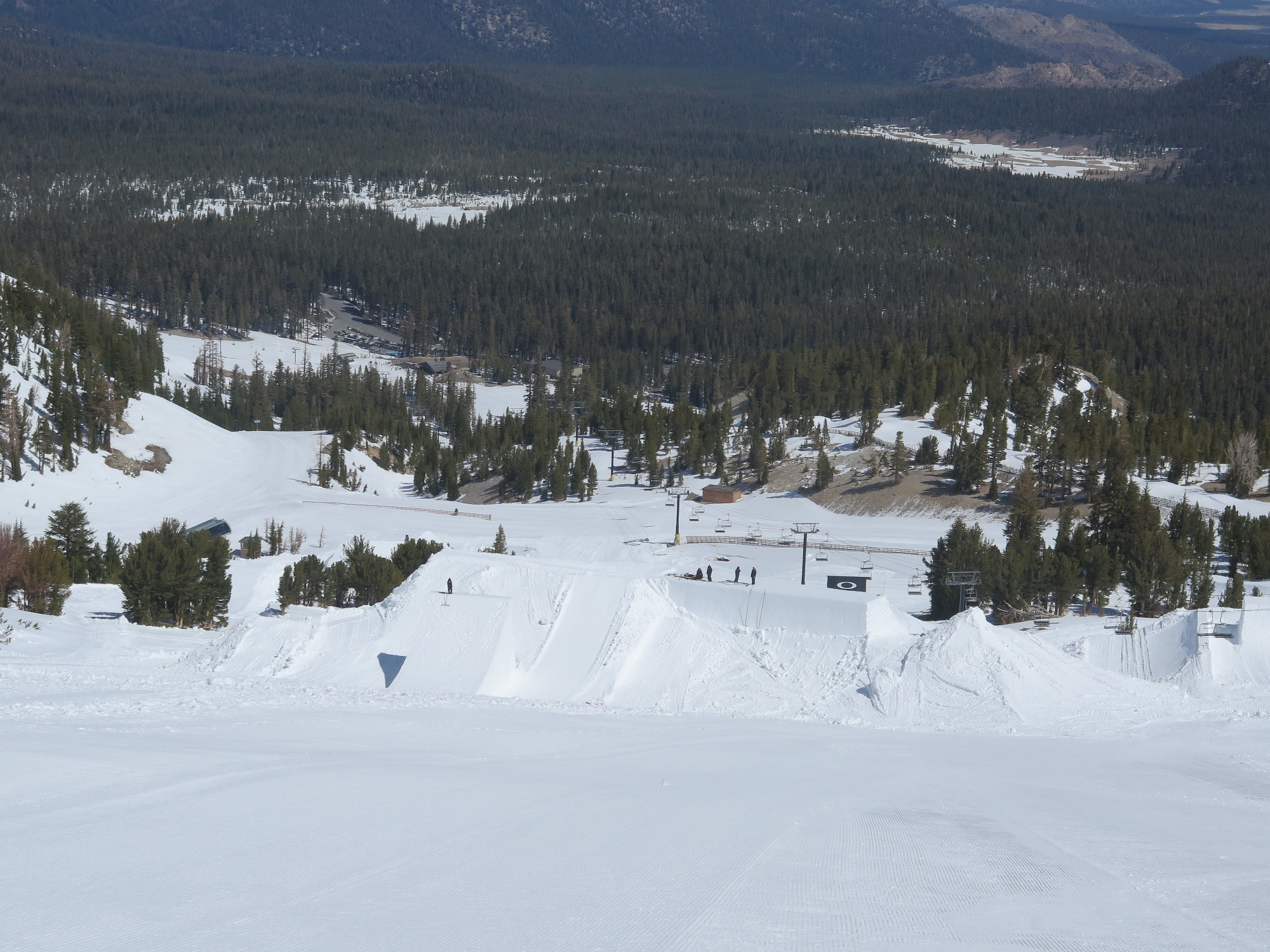 The most extensive construction was on Face of 5 and lower Solitude in front of us, so I knew we had to go around hard right to the top of Roller Coaster. We returned to the Mill base via Wall Street, which it turned out also had park construction. 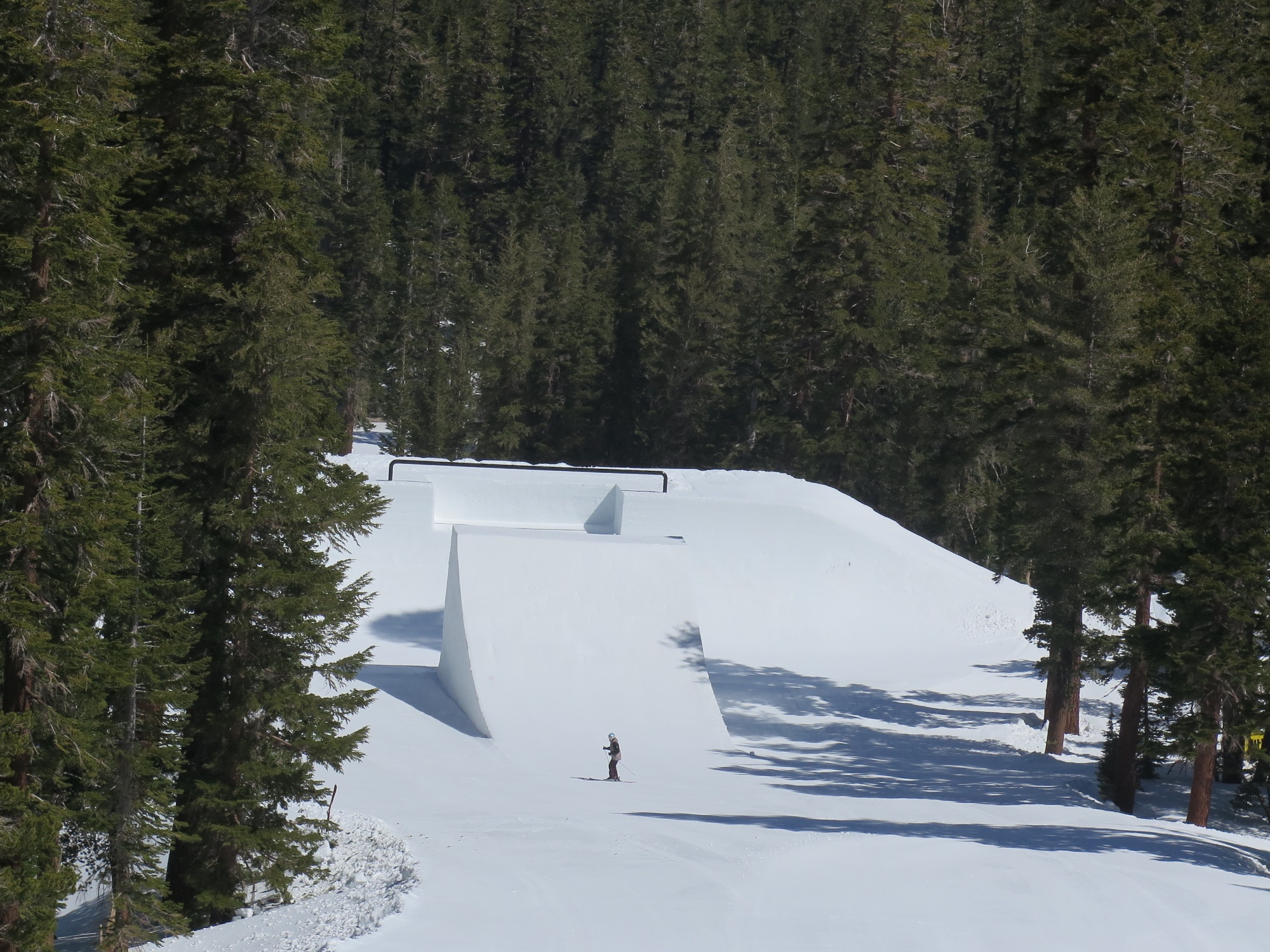 We went back up top at 11:30 and took Roadrunner around to Scotty’s. I traversed right into the Hump, where I could see good windsift. This was a nice run all the way down, with lower Scotty’s packed powder transitioning into corn on St. Anton with no hard snow in between. The lower mountain had by now seen enough warmth to soften so we took a well timed run on Stump Alley.

While riding 2 the weather started to come in so we could see we were done with the top for the day. We rode 3 with it now snowing so I put goggles on at the top of 3. We traversed into 5 but did not find as much blown in snow as I expected. Liz was cold and took a break at the Mill, suspecting she was done. I took another lap through 5 this time being pelted with graupel as I was riding lifts. Dry Creek had much more blown-in snow than the prior run.

At 1PM I picked up Liz at the Mill and rode 2 up to check out the race course runs she had inquired about earlier. I told her they would be the last to soften so we should wait on them, which turned out to be the right call for the wrong reason. After an hour of graupel the snow was creamy smooth as we exited chair 2 and we could see a couple of defined tracks going down Terry’s so we skied that. Despite the blustery weather the surface was now hero snow so we skied 3 race course runs. We finished by taking 3 to another Dry Creek run, also greatly improved by the intense flurry of graupel.

With the nice resurfacing Thursday’s skiing should be good even if it’s storming and the top is closed. Friday looks to me to be a likely replay of Tuesday, so anyone headed up there this weekend should think about going a day early.
R

So glad to know visit to Corti was worthwhile for Liz, Chemist will be happy to hear about it too.

Thanks for the report, those Superpark features look nuts!

See how in your photo there's a traverse track heading East? There's no need for that track except for skiers who rode up Chairs 12 and 13 and don't really know how easy it is to get back to 1 or G1. We can see that for the folks who started way high from a summit lift, by far most of them were making nice powder turns but then thought they had to traverse east too.

That's simply not true, there appears to be a "hole" (not pictured) but it's an optical illusion. Tony probably knows this but like the powder tracks indicate, most do not. Everybody would have a much better run if they continued their line kinda toward the last E in BRISTLECONE. Then just ski Bristlecone past the last trees above the CO in COMIN' THRU. You go thru the other way (East). Lower St. Anton is right there.

Staff member
I skied into upper Bristlecone, then took a hard right through the trees and dropped into St. Anton. That eastward "traverse track" was actually plowed, and sure enough Liz followed it as that was the first time she had been there and did not notice that I had skied lower.
You must log in or register to reply here.
Share:
Facebook Twitter Reddit Pinterest Tumblr WhatsApp Email Share Link
Top