Tuesday 11/30/21
I wanted to get to So. Tahoe Mon eve with an hour of daylight to checkout cabin and rake some pine needles that are always falling, but things my 91 year-old Mom needed help with before I left piled up so I didn’t leave her house until 1:30. It was almost dark when I stopped at Silver Lake near Kirkwood. (I took that route to avoid Sac traffic and it is shorter.) Continuing toward Carson Pass, I could barely see some of the burnt trees from Caldor Fire before and after Kirkwood. I left So. Tahoe the next morning before 6 and was on chair 2 about 9.

It was mostly clear so sunrise was not that great. I stopped to take this about 10 minutes before sunrise over Topaz Lake. 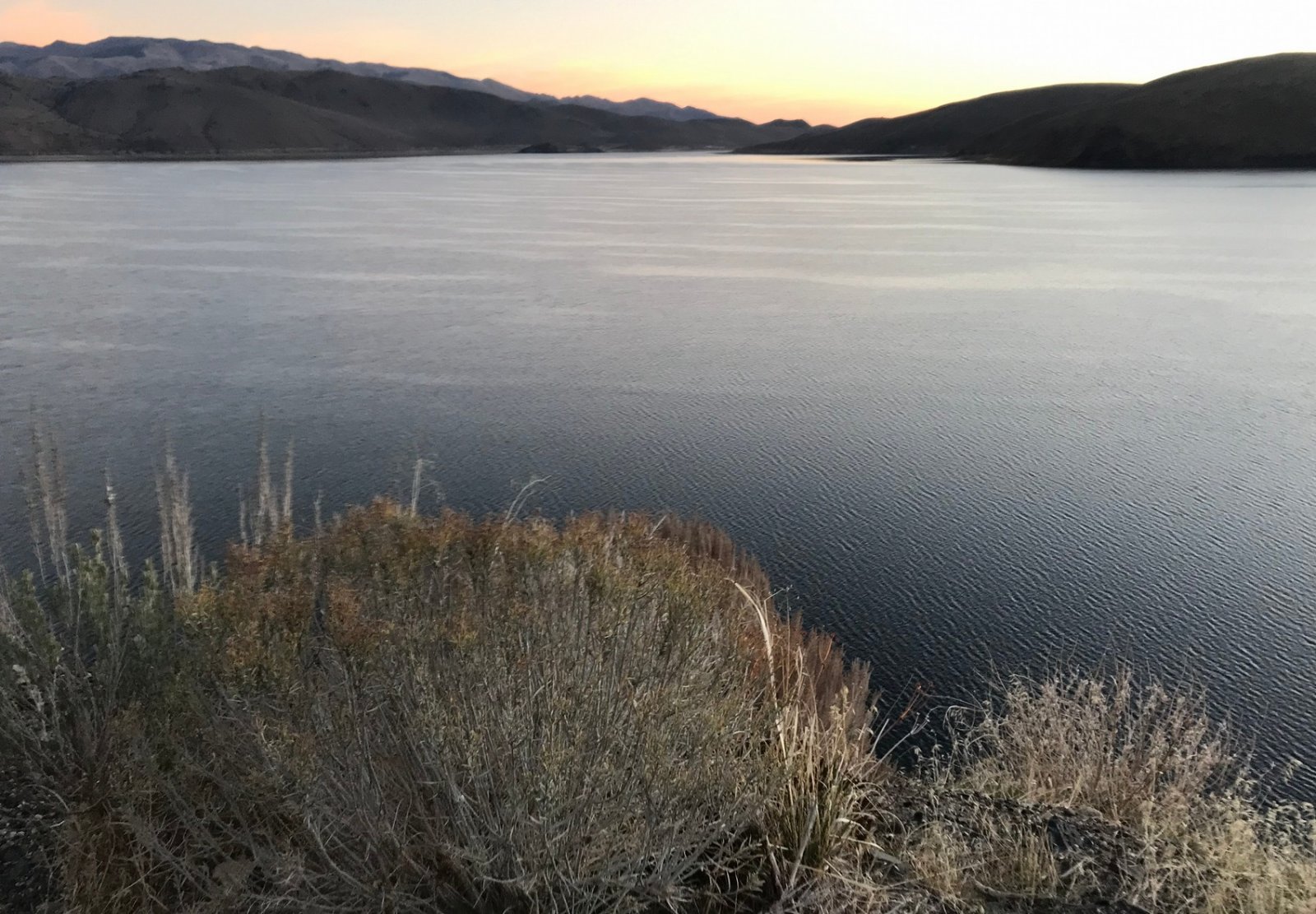 It was nice to be able to park at the Mill and take lift from and ski back to within 30 steps of parking, and to be able to ski and ride (mostly man-made) groomers on chairs 4 and 10. Chair 5 was not running as it was many previous days including (I heard) Monday. Mid/upper Solitude that I used to return from Dave’s was thin as was lower Solitude by end of day. Man-made surface was generally good, but as day went on more gravel/floaters appeared on the snow. Cornice was good on my 3 early laps, then scary firm for the first few turns on my one late lap. I skied Dave’s four times including 2 after my lunch break. It was not as good and more challenging than earlier in Nov, but it was nice to not have to exit past the fumaroles. I never tried Wipe Outs, Drop Outs or Climax. This guy braved Drop Out under the chair from the top at 1015. 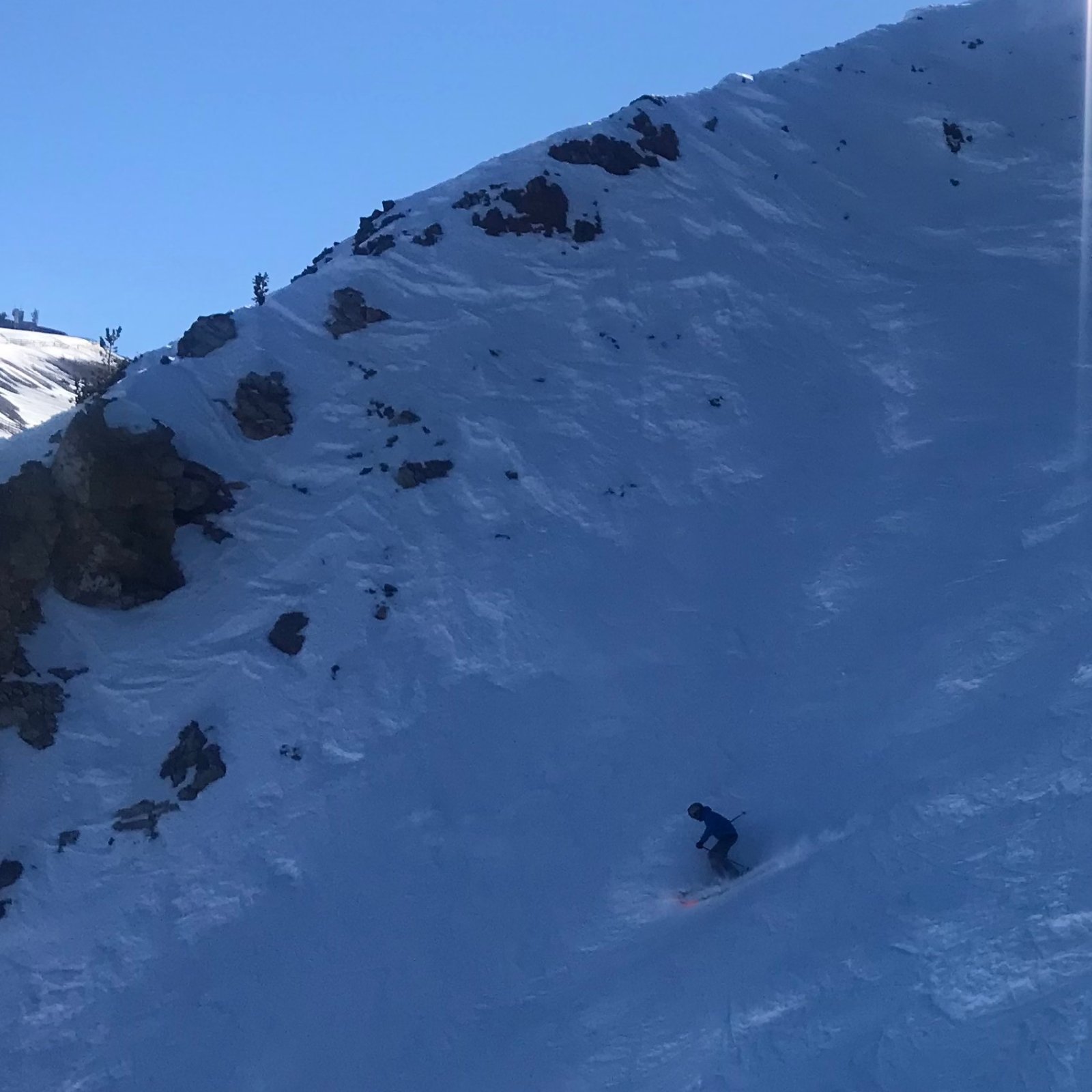 I said hello and shared a beer with Kurt (@mountainmonster from SkiTalk) on my return from lunch. Not sure where I skied all afternoon (other than Dave’s and one Cornice lap), but ended my day with 28K by skiing and riding chairs 4, 2, 1 (where Andy’s was good all day) and 3 (Saddle Bowl). Last picture shows Roma’s and Dave’s at upper left and upper Solitude at center. 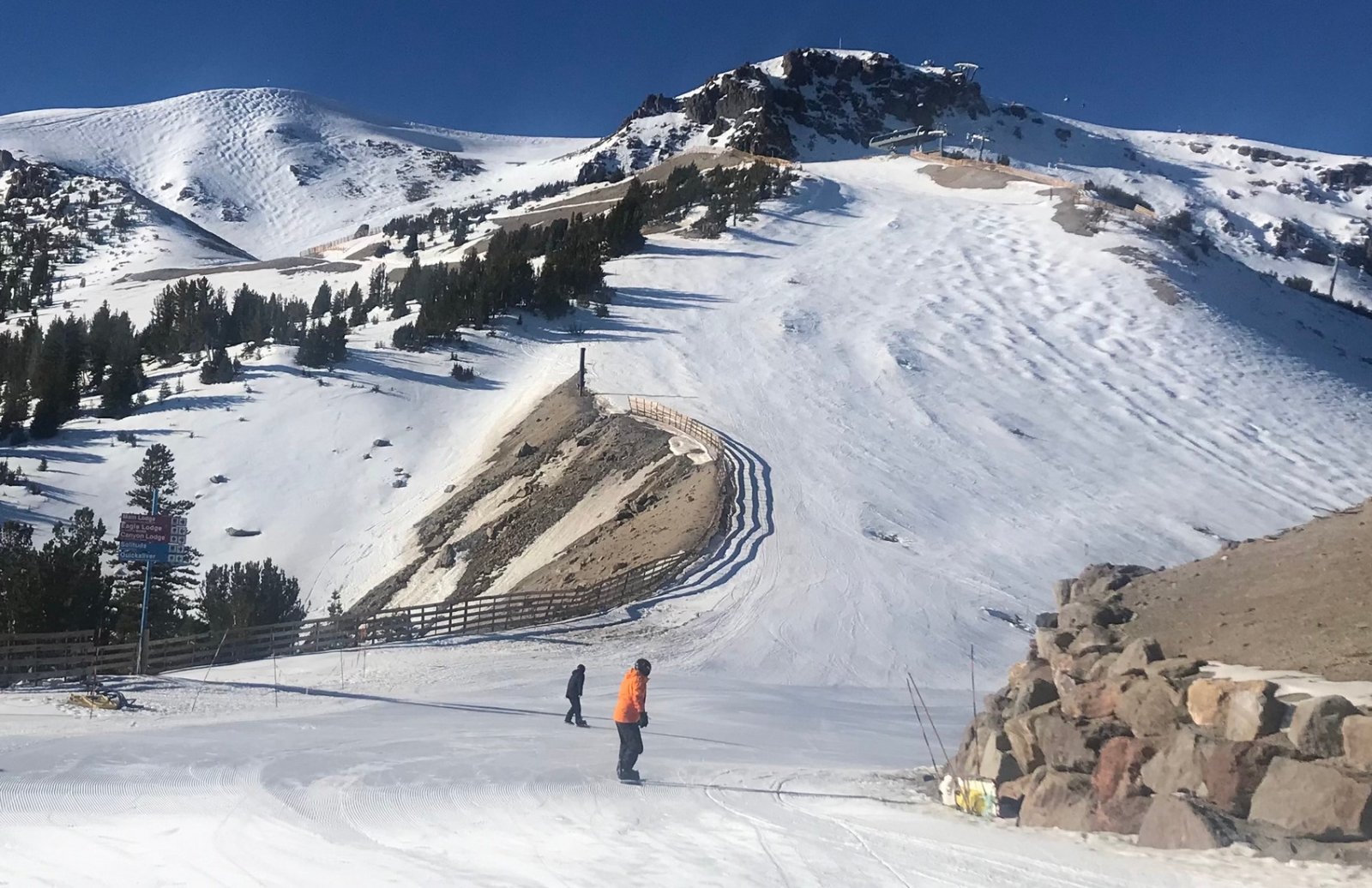 Wednesday 12/1/21
I skied 830-2 without taking a lunch break, then did the long drive (273 miles with maybe 100 miles of four-lane or freeway) home via 9600+’ Sonora Pass that includes a few turns posted at 10-15 mph and some over 25% grades. My watched counted 25.2K. Groomers early were very good, but more gravel and a few thin spots appeared as day went on. Cornice was scary firm for the first few turns all day.

No crowds and they removed most of the lift mazes and a barrier that made you slow down well before chair 4. I skied Scotty’s before 10:30 and found good snow on both it and Skyline getting there, but should have returned to chair 23 as St. Anton was shiny and very firm. 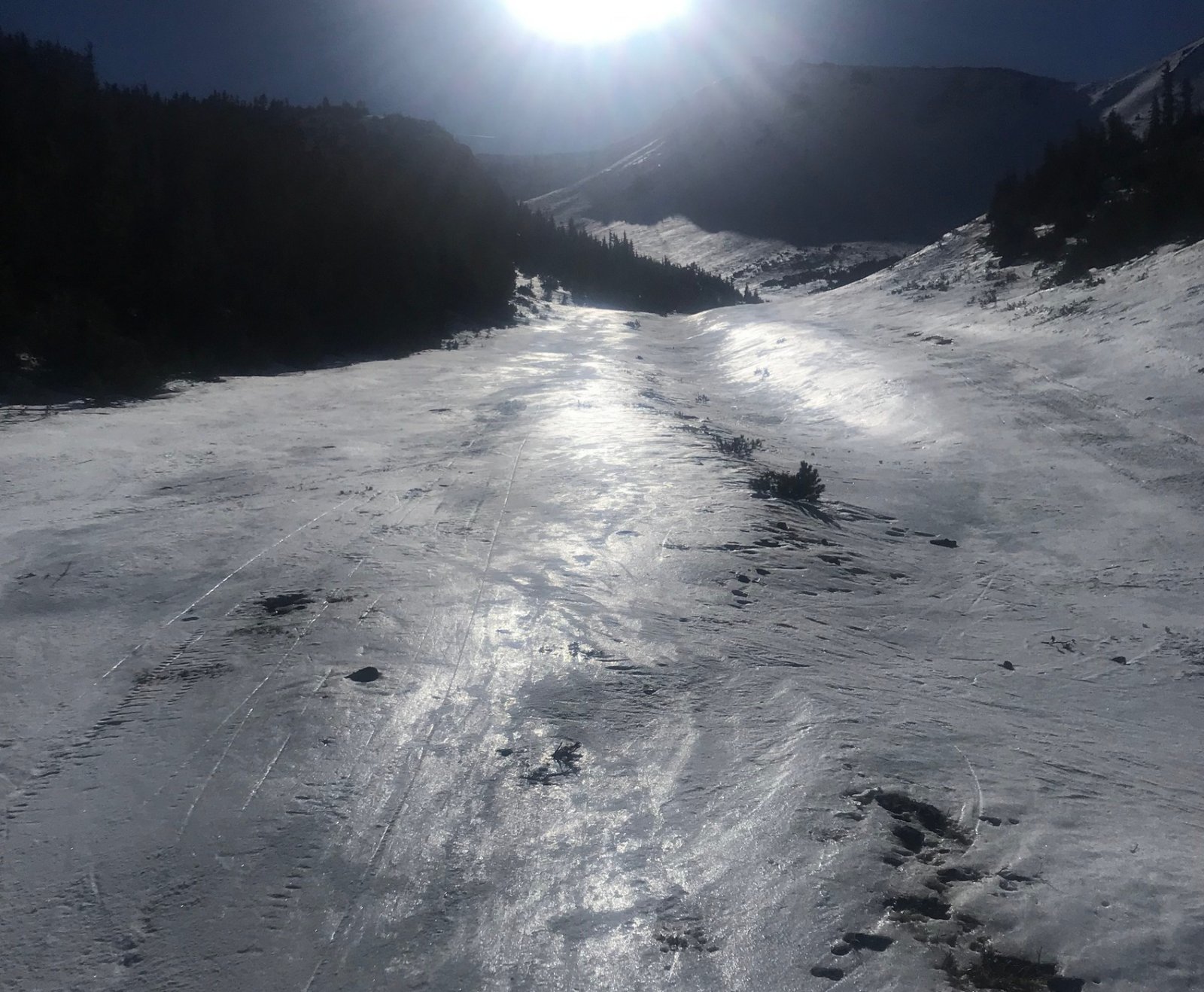 I swapped to shorter radius skis about 1130, then after a warmup on Andy's which was very good, skied Drop Outs where I found best snow on the mountain and did it five times. I braved the rocky moguls to get into Drop Outs a few times. I ended my day with a bottom to top gondola ride with a beer, then skied getting firmer Dave's to Solitude to the Mill. On my second ride up chair 23, I had a longer than 5 minute lift stoppage in a place where chair is about 100 feet off the ground. 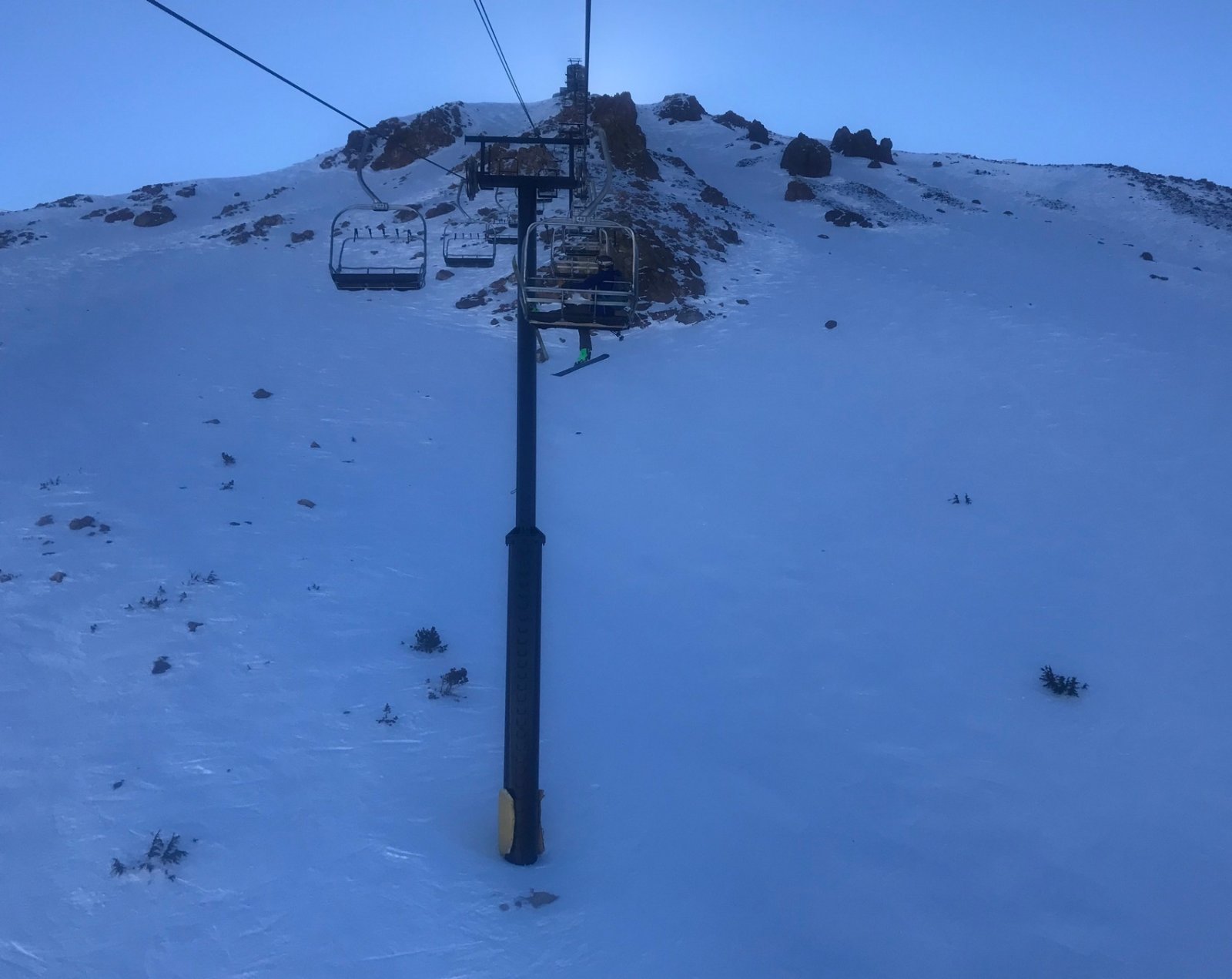 After a few minutes of stoppage, I started talking to guy in chair ahead on me and we ended up sharing lifts and runs for longer than we both had planned. Ray is a musician from Chicago who spent 17 winters playing in a hotel and skiing in Chamonix where he says the powder only lasts a couple of hours even though place is huge compared to Mammoth and most US ski areas. 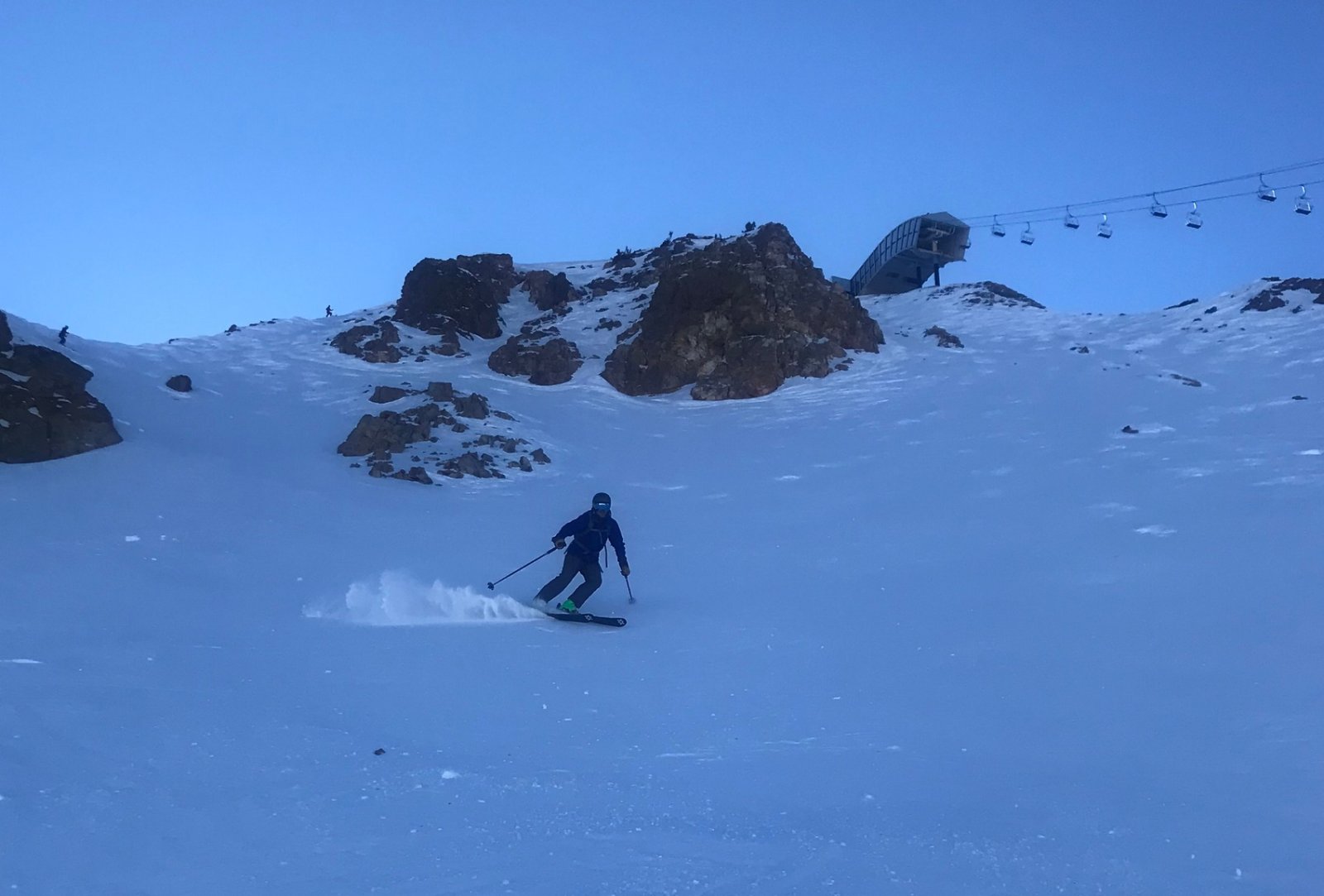 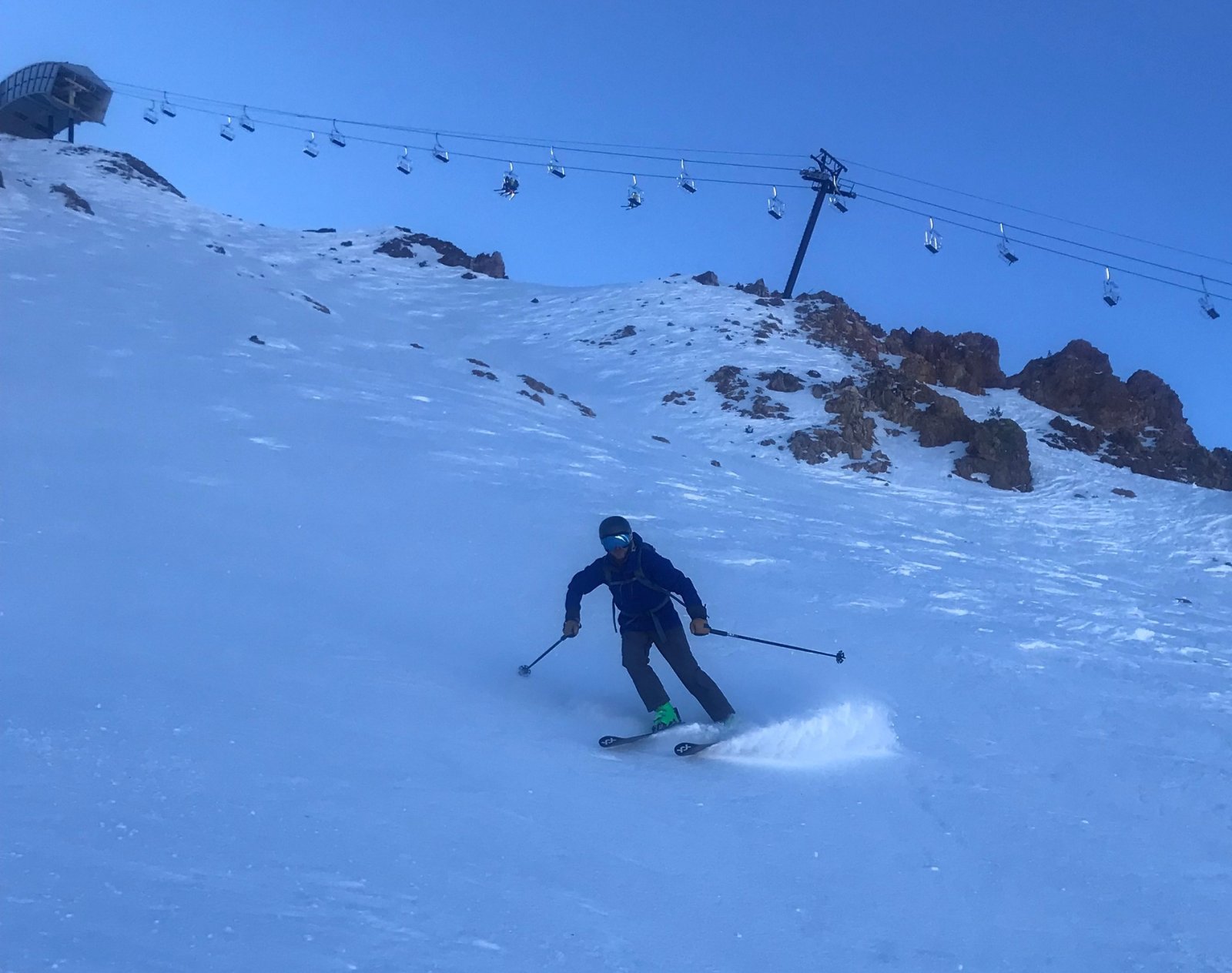 I'd carried this beer from 1130-130 & opened it on my last gondola without much spray. It's Chasing Freshies. I like Deschutes Fresh Haze and Fresh Squeezed more. If I have to go back to Mammoth in Jan to find good skiing, I will bring camper and ski more than two days, 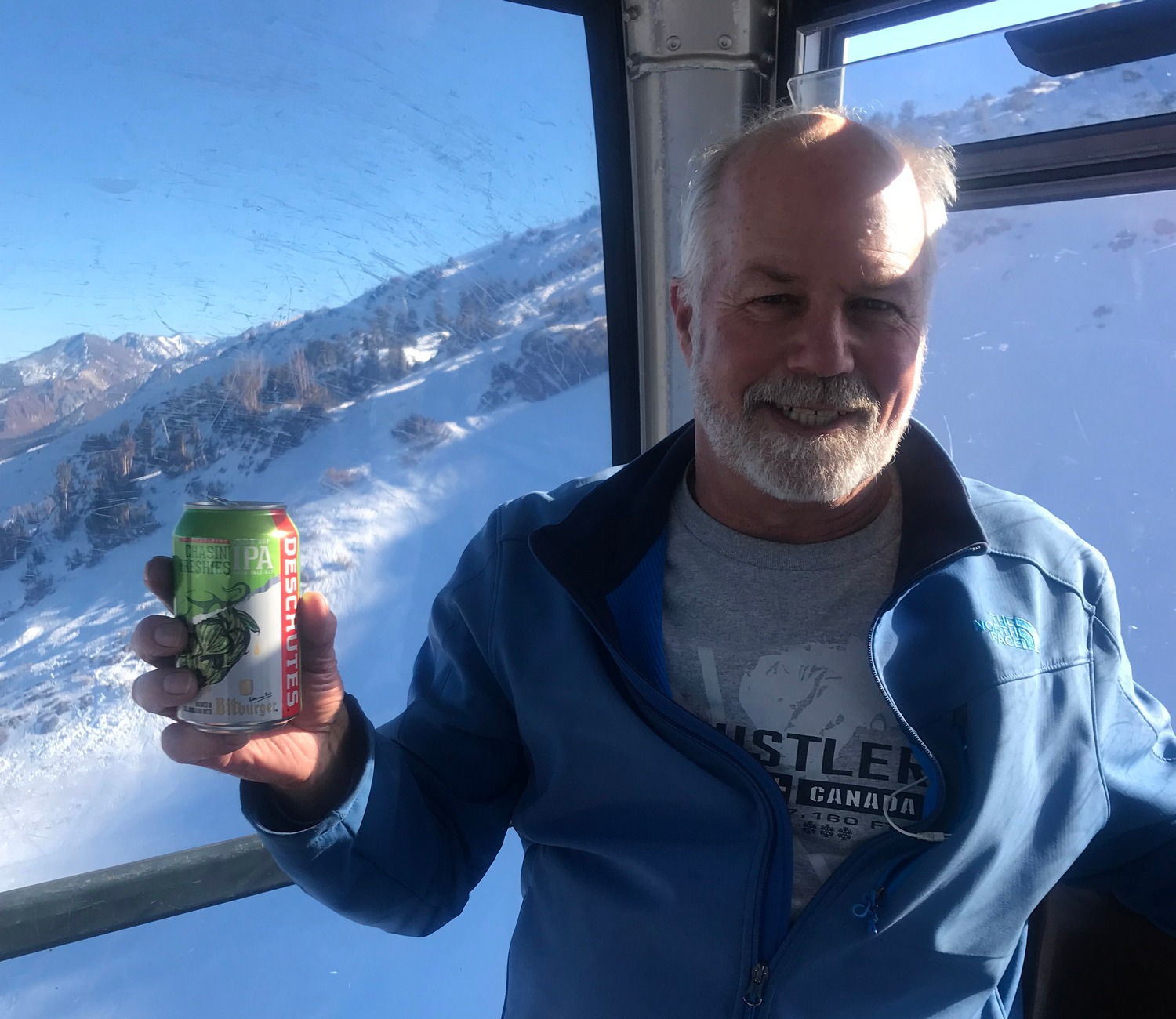