Staff member
I almost never go to Mt. High unless East is open. But this year I turned 70, which gets me a free pass, for which I signed up at Ski Dazzle in December.

Garry is on his second year with this freebie and has been up there quite a bit as his 45 minute drive is half the time of mine. He reported favorably yesterday morning, though Mt. High's website only showed 2/3 of the runs open at West.

Last Sunday it rained all morning but turned to snow in the afternoon. Through Monday it snowed at least a foot at the top of the local ski areas though there was some more mixed precipitation lower down.

Since then it has been clear but cool. I arrived at 9AM and for the next hour most of the snow guns along the Blue Ridge Express chair were on. 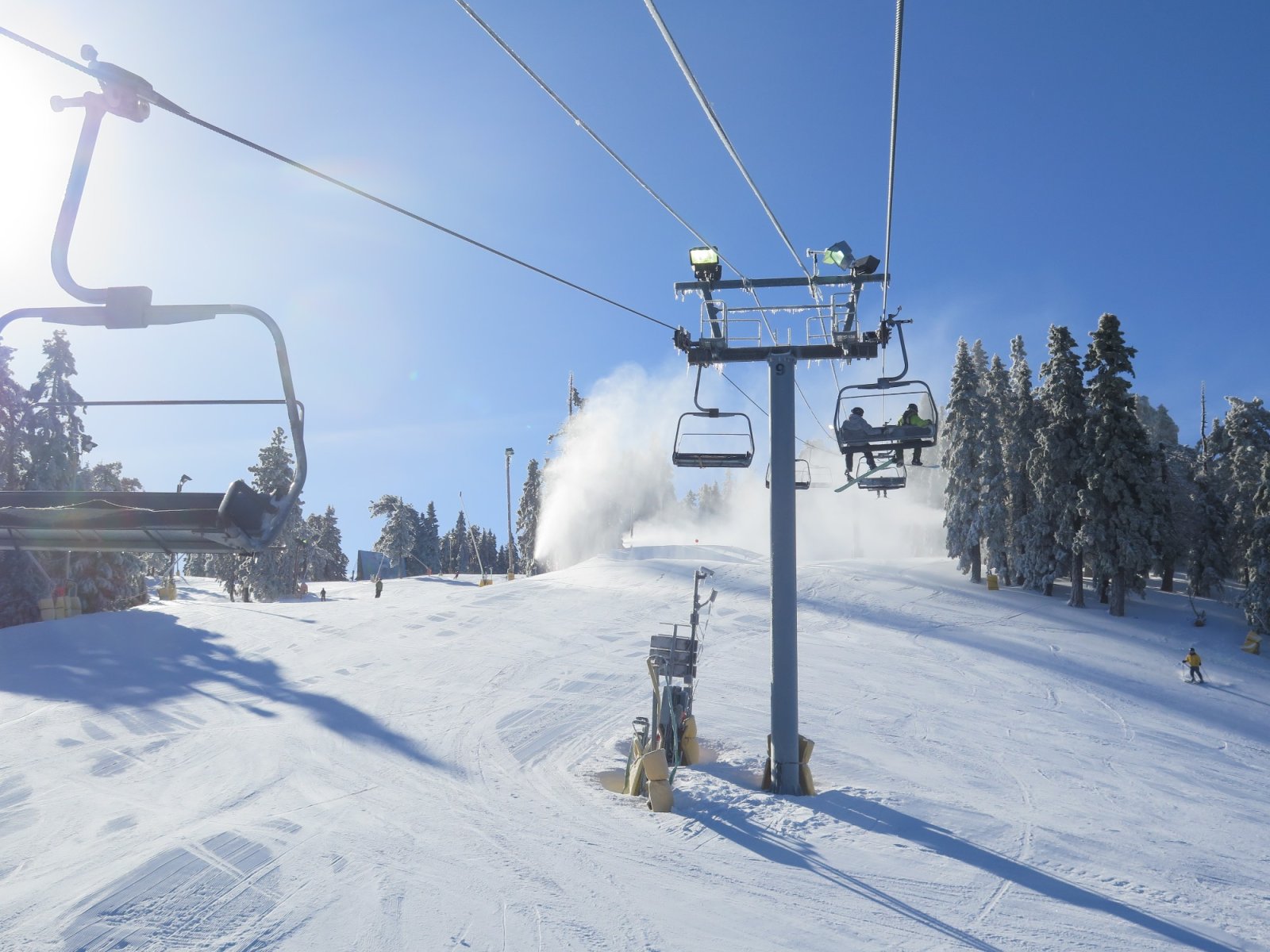 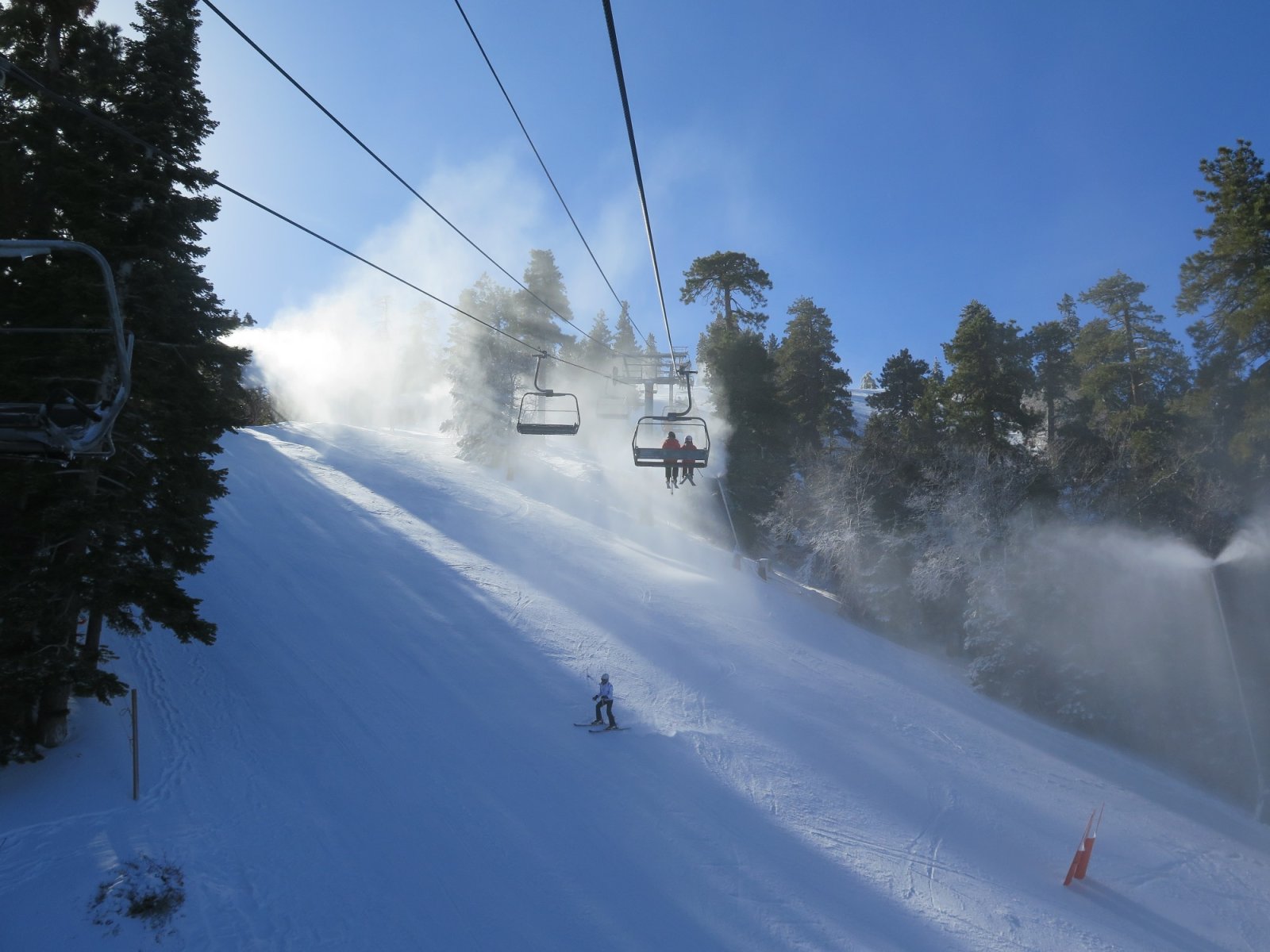 I don't think it got out of the 30's all day. I was wearing my usual lighter clothing for SoCal, but my jacket was zipped and hat on all day, unlike Big Bear 4 weeks ago.

From the top is a view NW across the high desert to the Tehachapis and the southern Sierra. 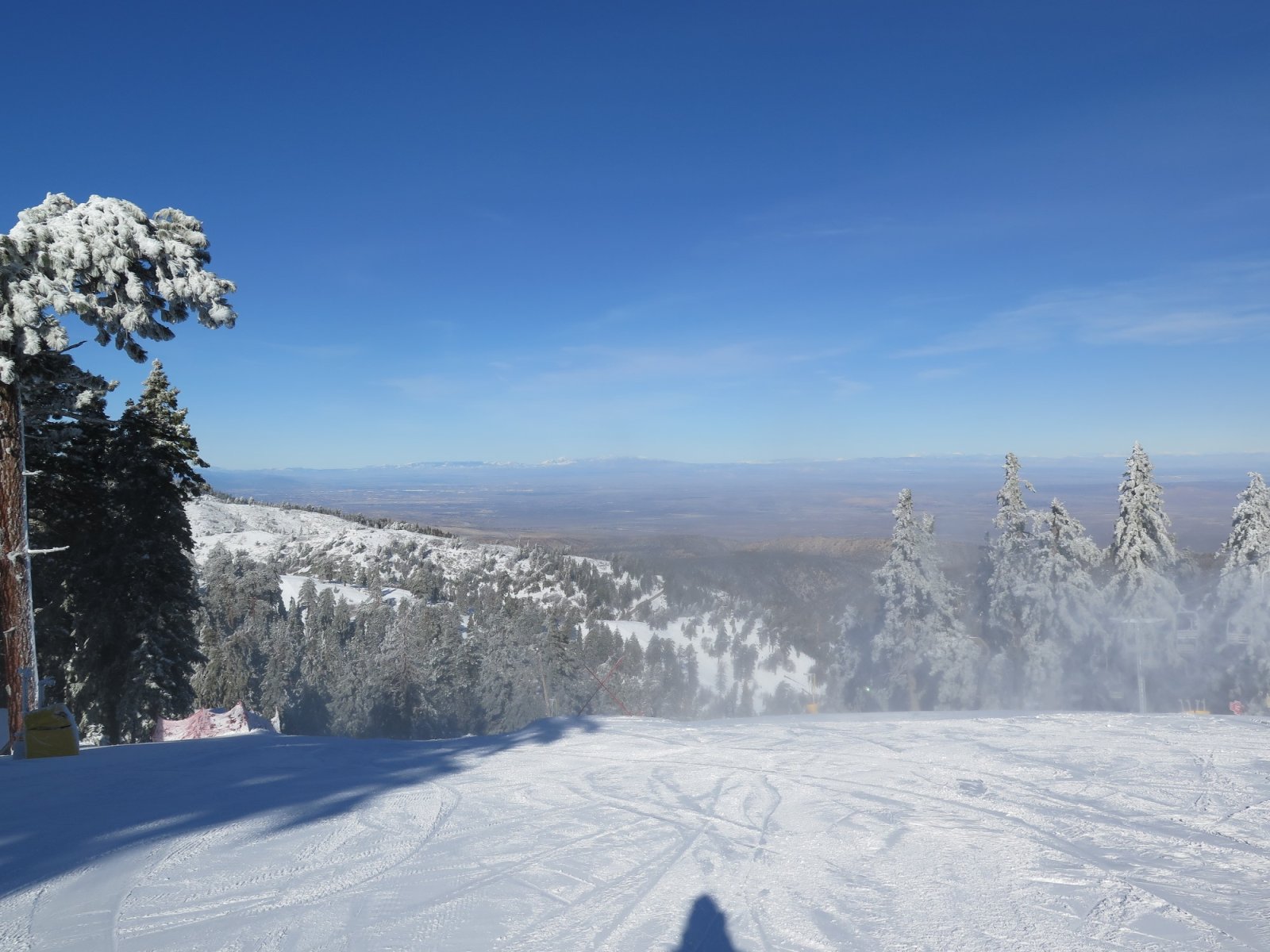 I was pleasantly surprised by most of the snow conditions. Wide open blue runs were mostly packed powder. Every marked trail was groomed including those dropping from Inferno Ridge. 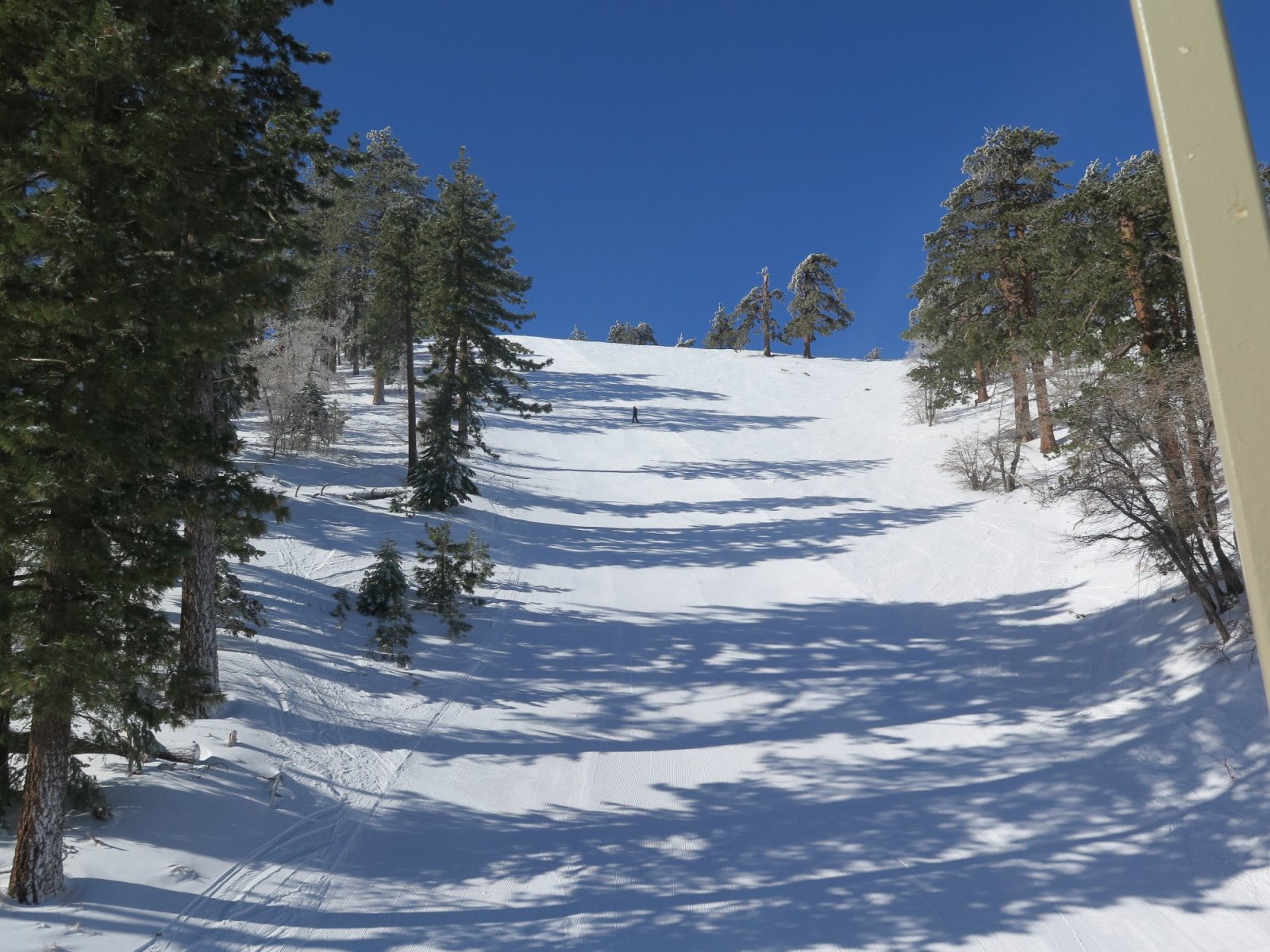 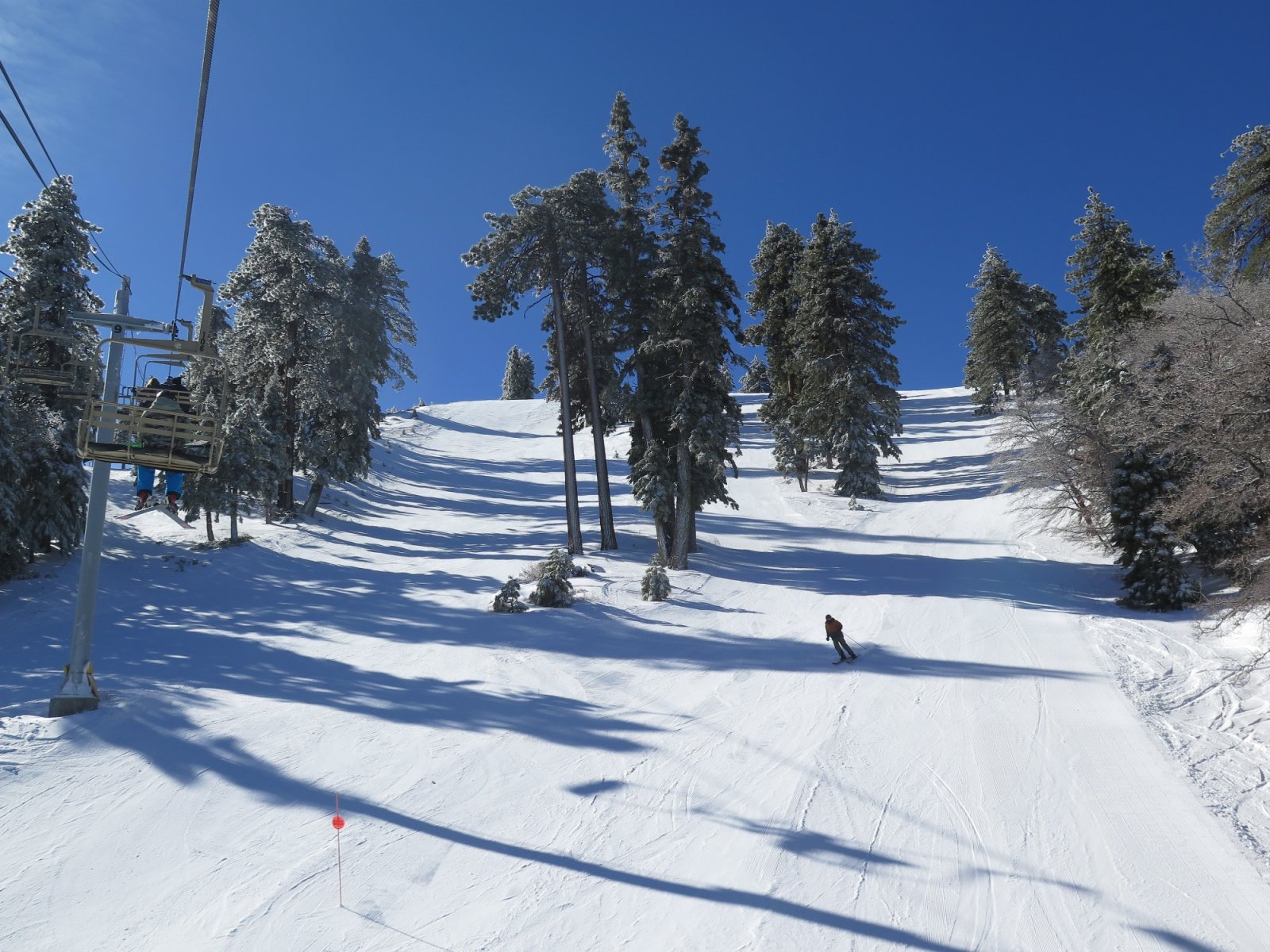 Those runs do not have snowmaking. They were hardpacked but easy to hold an edge. The steepest runs on the other side, Silver Spur, Calamity and Vertigo, do have snowmaking and were somewhat firmer. Gunslinger, north facing and sheltered by trees without snowmaking, had the best snow of the black runs.

Only the beginner area had high skier density today. 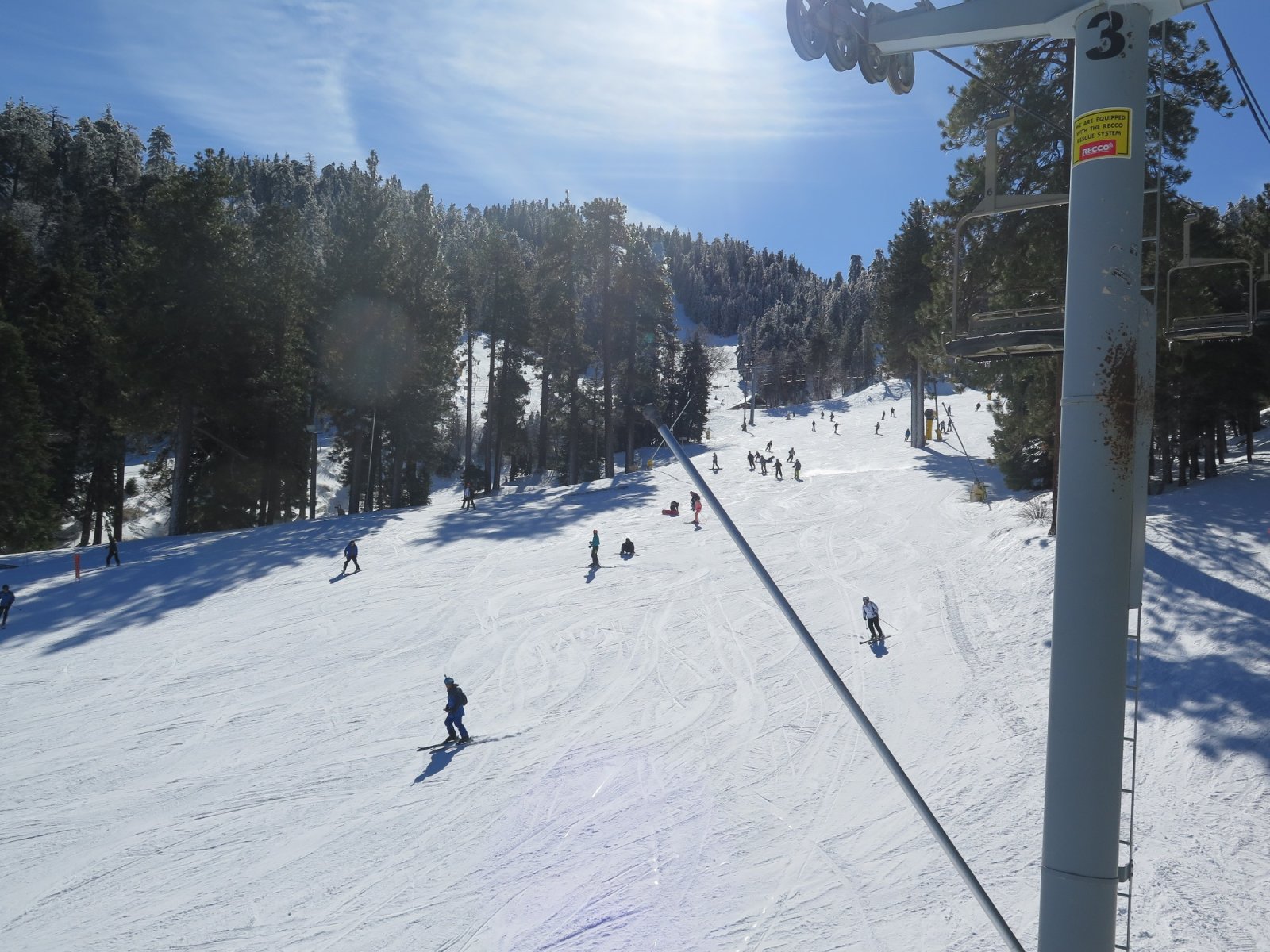 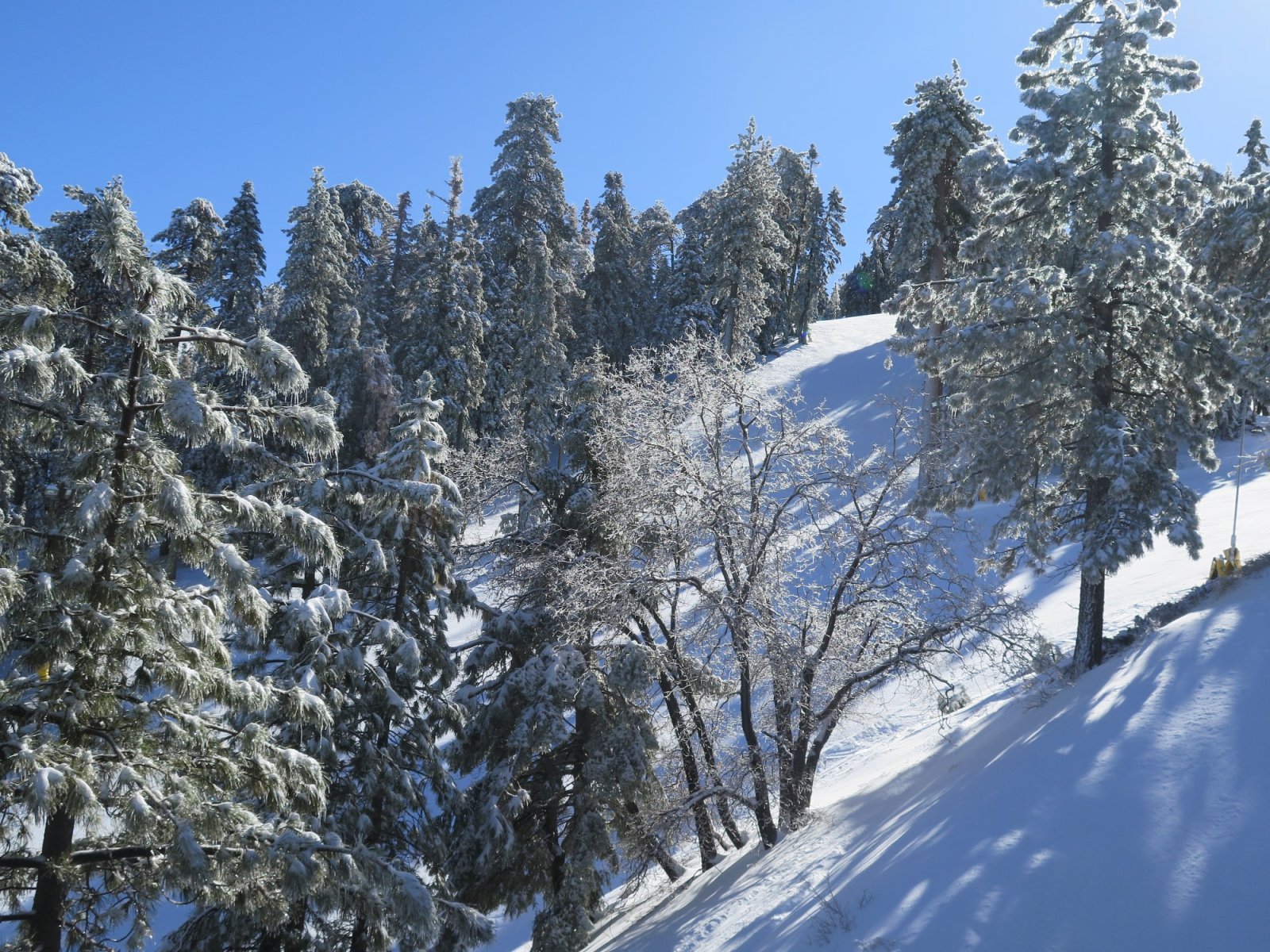 At the top of Conquest lift there are rimed trees with Mt. Baden Powell (9,300) in the background. 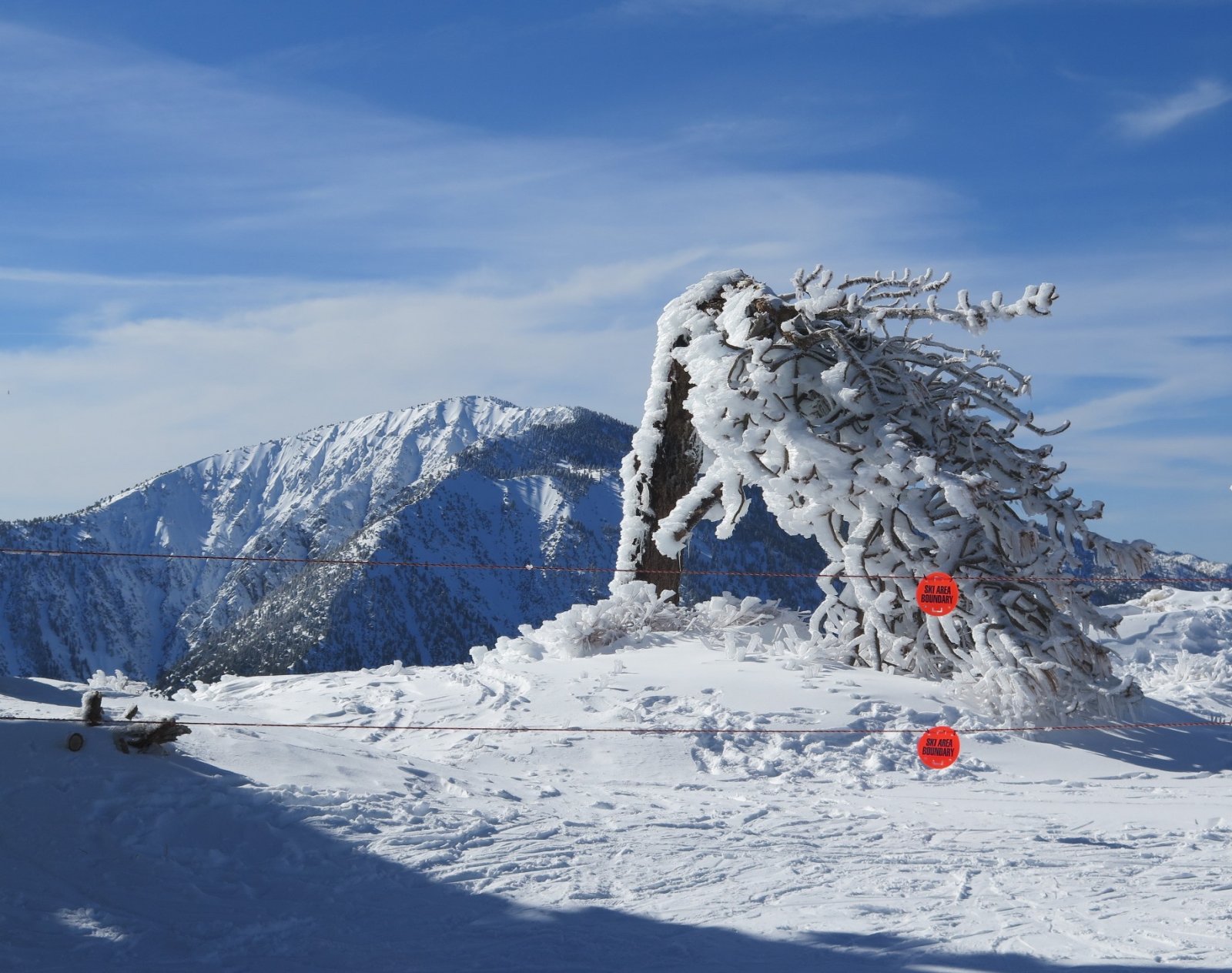 The other reason for me to ski today is that I've lost 3 Vertech watches this year so probably won't have one in the Alps. So I got the SkiTracks app that ChrisC uses and gave it a test. 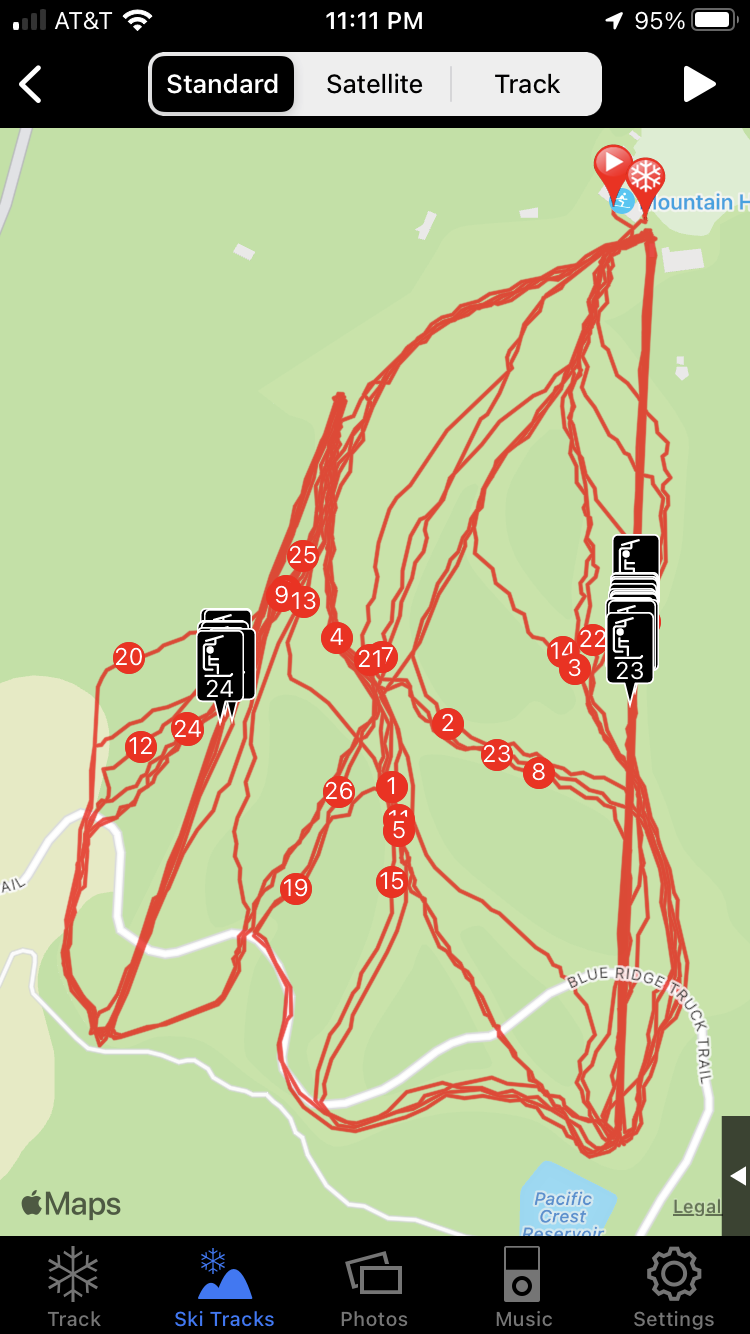 I left by 2PM but stopped by the bottom of East on the way out. 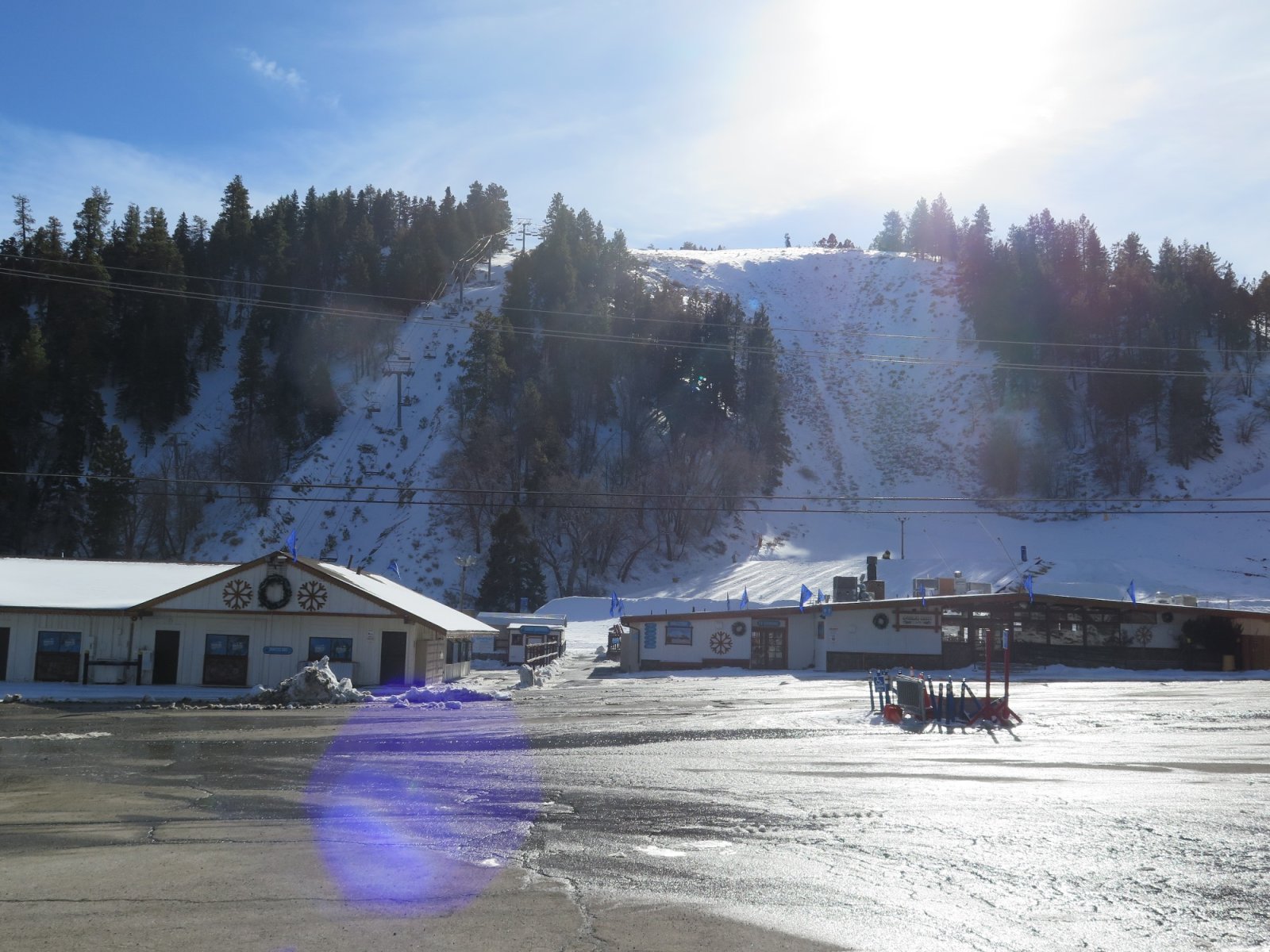 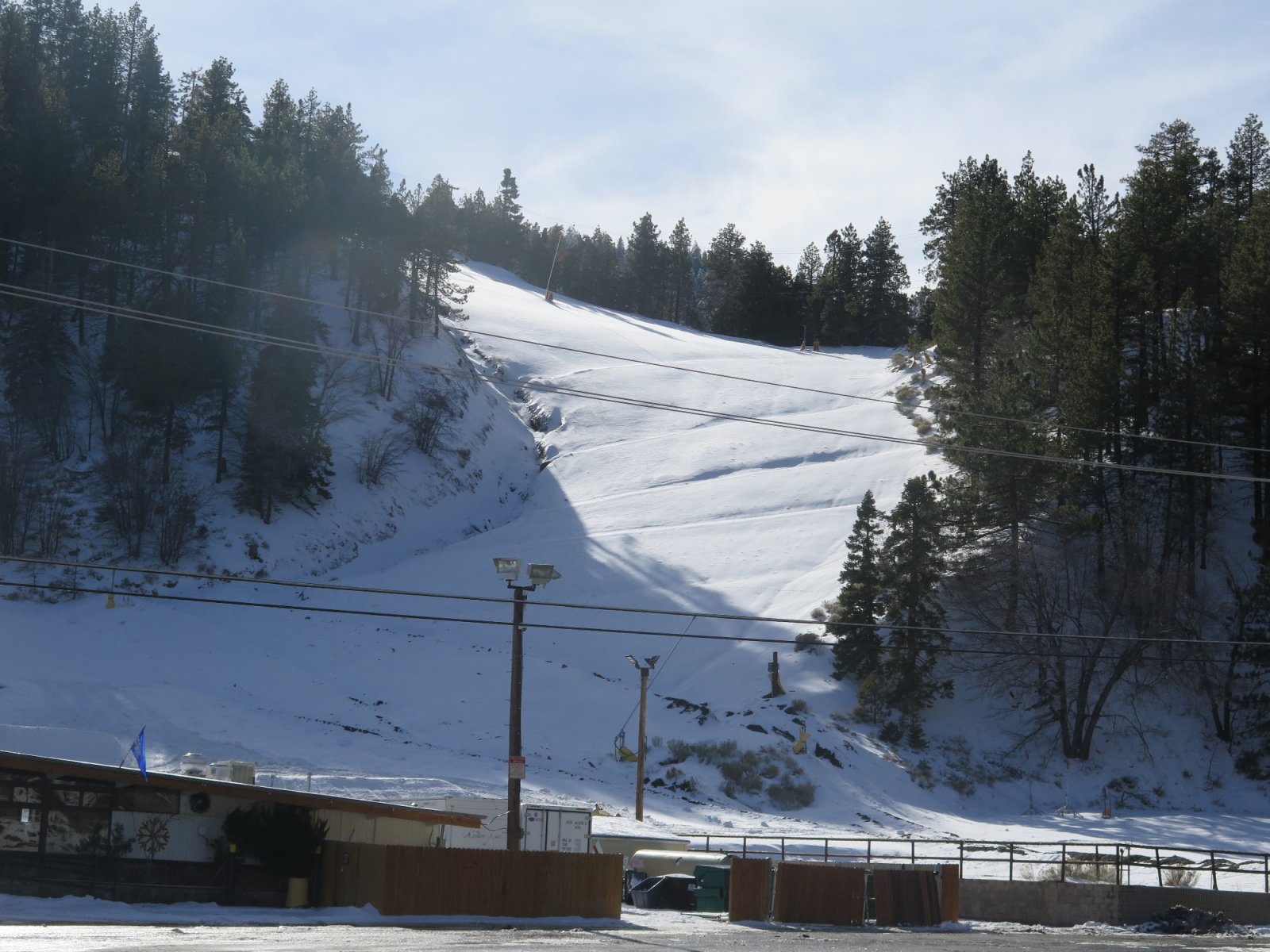 In the first pic you can see they have built a tubing park between the lodge and the bottom of Olympic Bowl. The second pic is the bottom of the main run Goldrush. There has been no attempt to pack its snow. The parking attendant also confirmed that no snow has been made at East. So it will take a dump of at least 2 feet IMHO for East to open.

The bad news at Mt. High is that the lot at West is $20 paid parking every day. Big Bear only charges on weekends and holidays.

They looked in real bad shape after all those rain events.

Interesting that lot is paid only now, but not surprised. Are there any free parking lots for them now, or do people still park along the highway like they used to?

Any idea what happened to Mt. High North? Does it still operate if there is enough natural snow? Not much listed on their homepage about it other than a map. I used to enjoy going up to that lodge and hanging out by the firepit. Only got to ride it a handful of times in my years living there. Fun-ish treed terrain, albeit short and not steep.

Sucks that East still gets so little attention, but I realize they just don't have the water capacity to blow over other than supplemental.

Staff member
There is a free lot at the bottom of West's driveway by the Big Pines junction.

hmmm... interesting, because North used to be where the tubing area was when I worked up there. I was under the impression they moved it because it would become such a shit show on weekend up there, and getting up to Table Mtn (North) was a challenge due to traffic, and ocassionaly weather. East logistically was better choice, supposedly.

Yes, I forgot about the lower lot down on the highway, although it's not a very big lot. I know they also used to park people at east and do a shuttle to west, but not sure they did that if east was not open.
You must log in or register to reply here.
Share:
Facebook Twitter Reddit Pinterest Tumblr WhatsApp Email Share Link
Top