And I get the second post of 2022-23? Vista is really only lift worth skiing at Northstar. Arrow is also running, but not sure why you would ride it unless you wanted quickest route to Comstock where new 6-pack is not yet running and I heard still needs to be certified. They could have been running slow Rendezvous which is reachable from Vista and gets you to the top of East Ridge.

The only groomed runs are (Intermediate) Pinball and (Beginner) Skid Trail to Lumberjack to Main Street (and The Gulch which I never skied). Coverage was much better than Heavenly. You had to download Gondola although they were making snow in AM from bottom of Vista to bottom of Gondola so they may allow skiing to Village by the weekend if not sooner.

I skied Skid Trail route twice. First time was my first run and second time was when one friend from Truckee joined me and it was his first run of the season. I think I skied Pinball 9x. Snow was good, especially along right edge where there was a little new man-made. Pinball got firmer in PM as it was scraped off. I also skied ungroomed Moonshine and Sidewinder 2x each and Lower Chute and Forerunner 1x each. Ungroomed snow was also good and obstacles were minimal especially compared to previous day at Heavenly. Not sure I would want to ski any Tahoe resorts with current coverage/limited operation on Friday or Sunday, let alone Saturday, but I'm retired and not a weekend warrior. 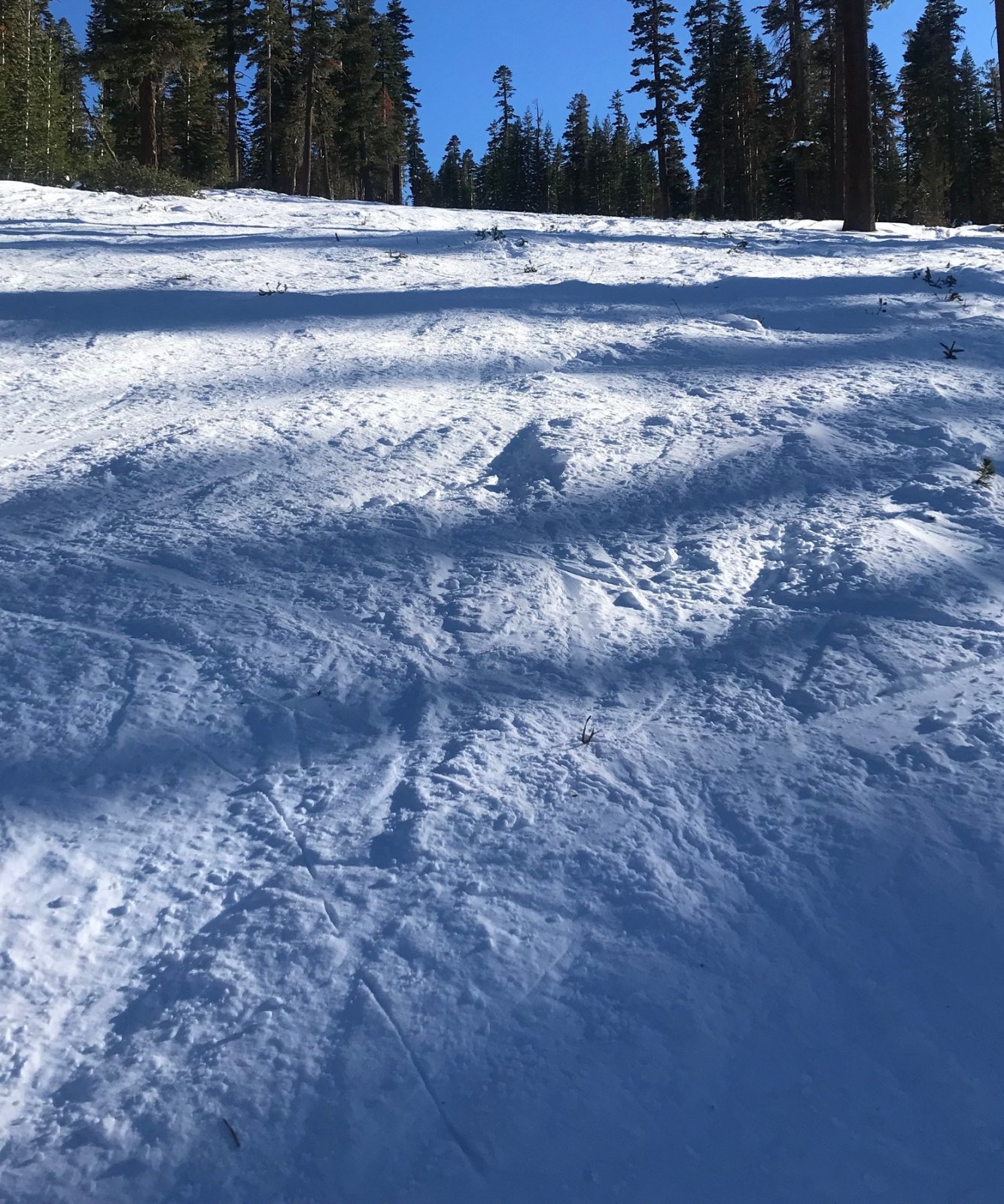 Looking down Sidewinder. There is an exit road to Pinball that avoids some obstacles on lower Sidewinder. 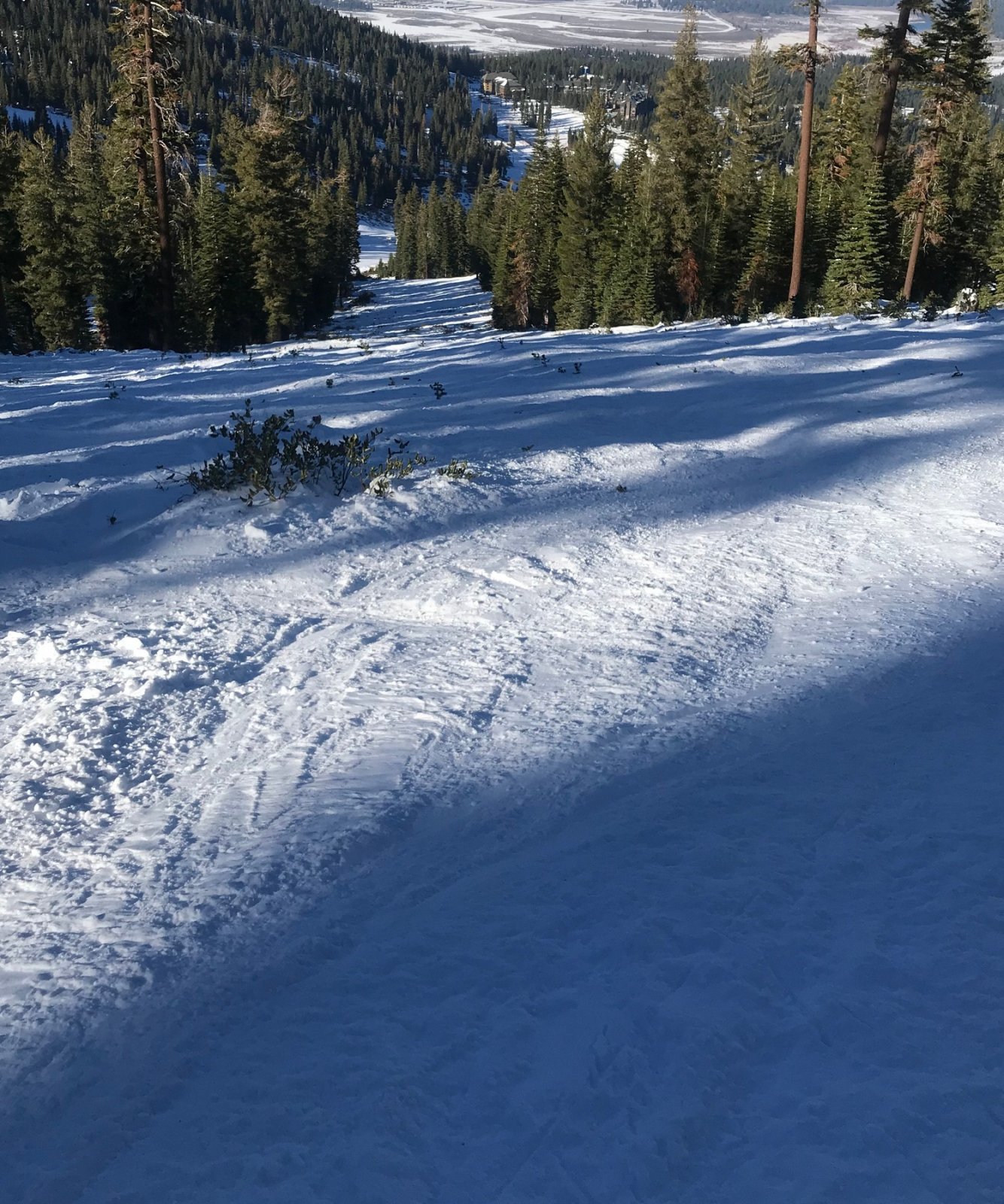 Even though I started at 10 and was back at SUV after downloading gondola and long walk, I got within spitting distance of 20K today. My Kirkwood/Heavenly vertical from yesterday is inflated by 1650' vertical tram than I, and everyone, downloaded. 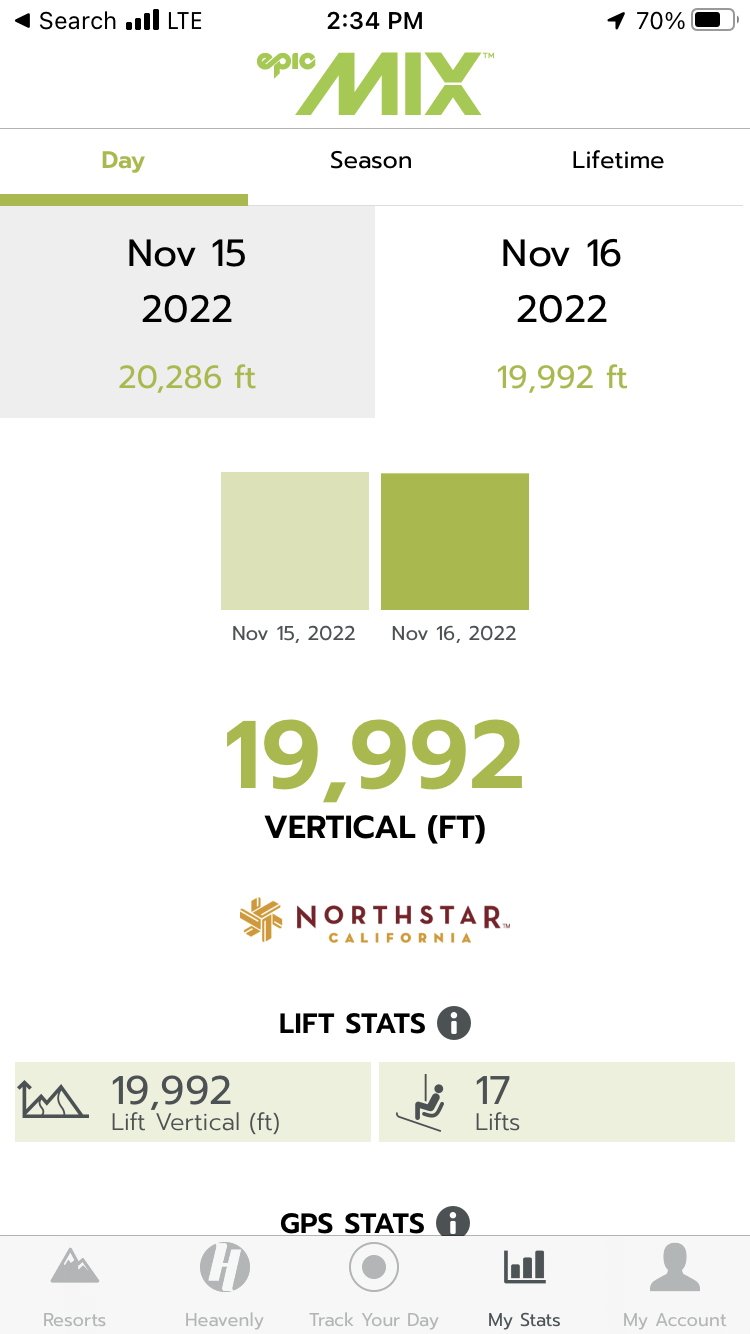 Looks definitively like a couple days of exercise and getting back into ski shape as opposed to the skiing itself being much worth it. You probably won't see a TR from me for a few weeks yet...

We will get to Mammoth next week. As I've said many times, any worthwhile skiing in November is icing on the cake. I wouldn't travel for what tseeb is getting this week (Big Bear seems comparable), but he's more like a local with his place at Tahoe.
Last edited: Nov 18, 2022

While I would not want to be at any Tahoe resort Fri or Sun with current limited lifts and runs, let alone on Sat, what I skied was enough for getting back on snow in mid-Nov. After skiing the one lift open at Kirkwood on Tues (due to wind), I was glad I moved to Heavenly in PM as I suspected there was not enough open with decent coverage for a whole day on Wed as I originally planned. I could have returned to Kirkwood on Wed, but getting to Northstar without crowds (I parked within 100' of not running until Nov. 18 Highlands gondola and walked mostly on snow to Village gondola, avoiding boot destroying walk through Village that not yet running shuttles get you) and skiing with a couple of Truckee friends made it worth the 39 mile each way drive.

Mammoth is 138 miles from SLT cabin and would make a long and not very relaxing daytrip (I'd commited to being home early evening on Thurs). And gas in Minden and Carson City is no longer $1 less/gal than least expensive CA gas. When I checked on Nov. 16, Costco in San Jose was lower than Carson City. The extra driving to Northstar vs. Heavenly meant I had to buy some gas on way home. For those interested there was a recent contest in my local paper to predict average CA gas price on Nov. 15 which was $5.42. I paid $4.59 in Stockton on way to Sierra and $4.68 after bigger than usual (21 cent/gal) GasBuddy discount in Lockeford.

tseeb said:
Mammoth is 138 miles from SLT cabin and would make a long and not very relaxing daytrip
Click to expand...

Child's play compared to most of your road trips to Canada.