Staff member
With all the brouhaha about Confederate monuments this summer, we had to check out the most grandiose one on the way north from Florida before the Taliban takes the artillery to it.

We arrived at the Stone Mountain Inn about 9:30PM Friday. After 3 months of southern weather I knew I wanted to climb that mountain early in the morning. We caught a break with the weather as it was thick overcast. 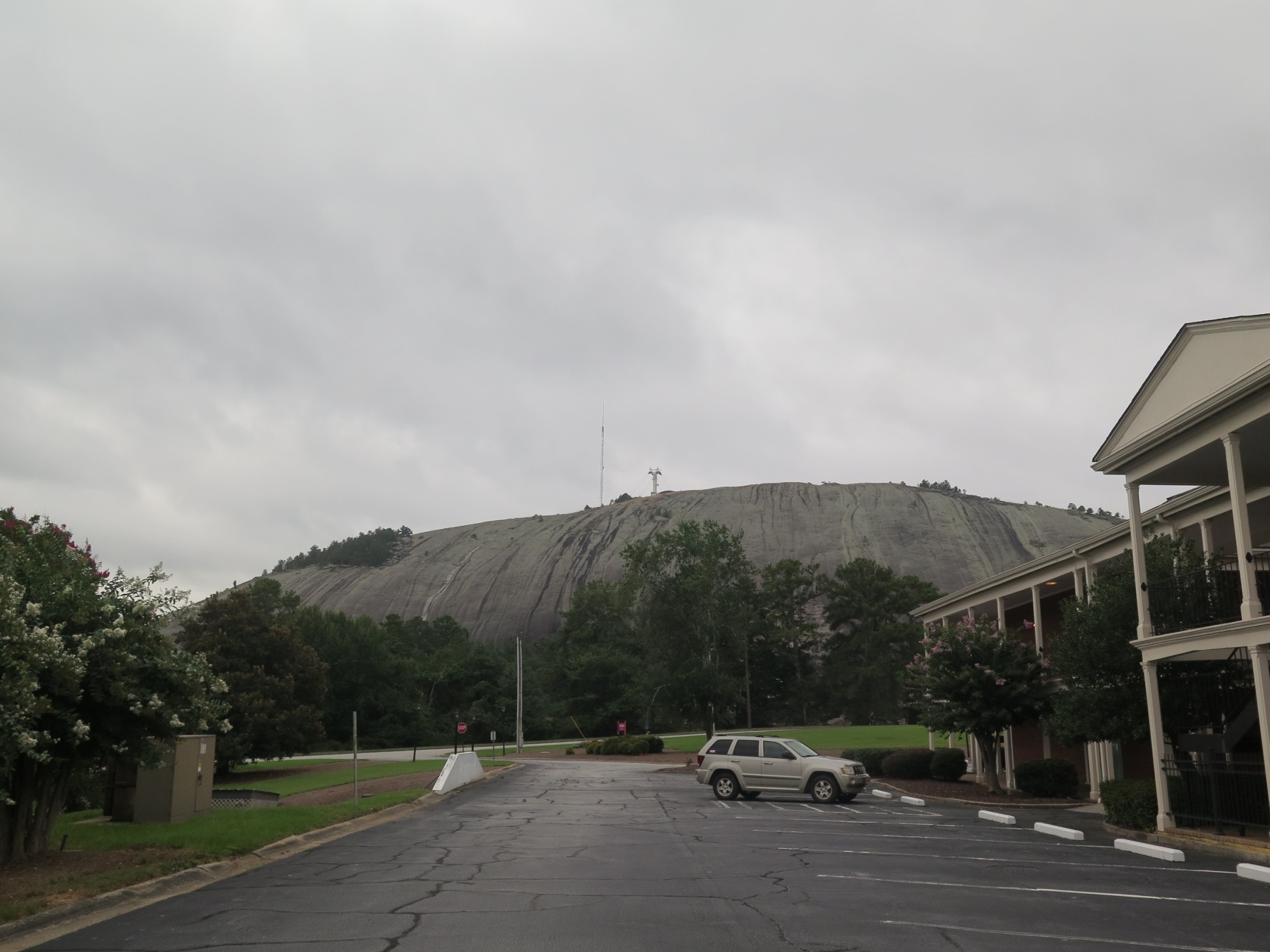 Both of us were struck in this initial view to the resemblance to Uluru which we climbed last year. Stone Mt. is granite (most common for monoliths, Uluru sandstone is unusual), and in the lush southern climate only that sheer north face of Stone Mt. is bare of vegetation.

We drove to the trailhead on the western side, and the Confederate flag display soon came into view. The breeze also made the climb more comfortable. 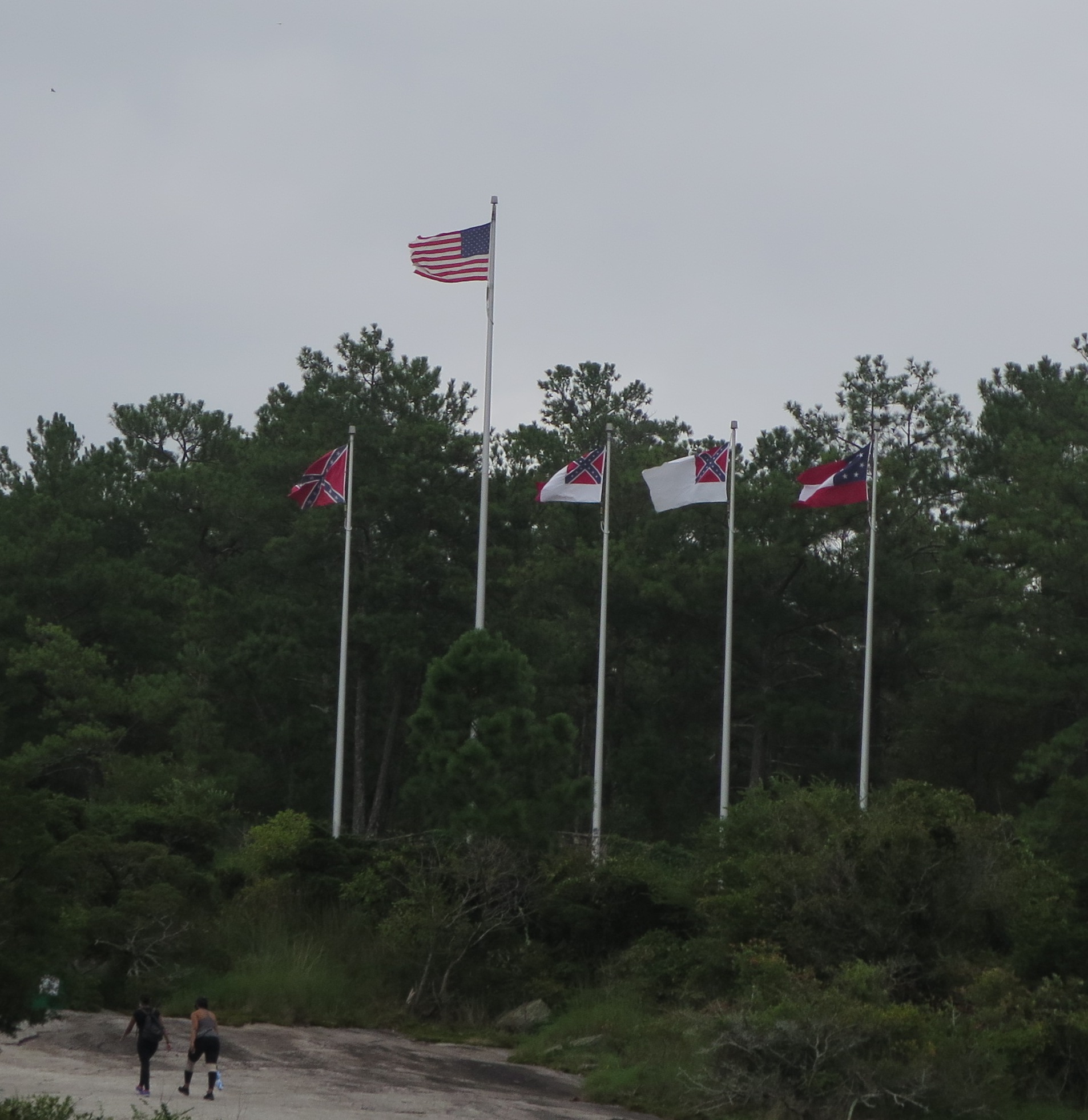 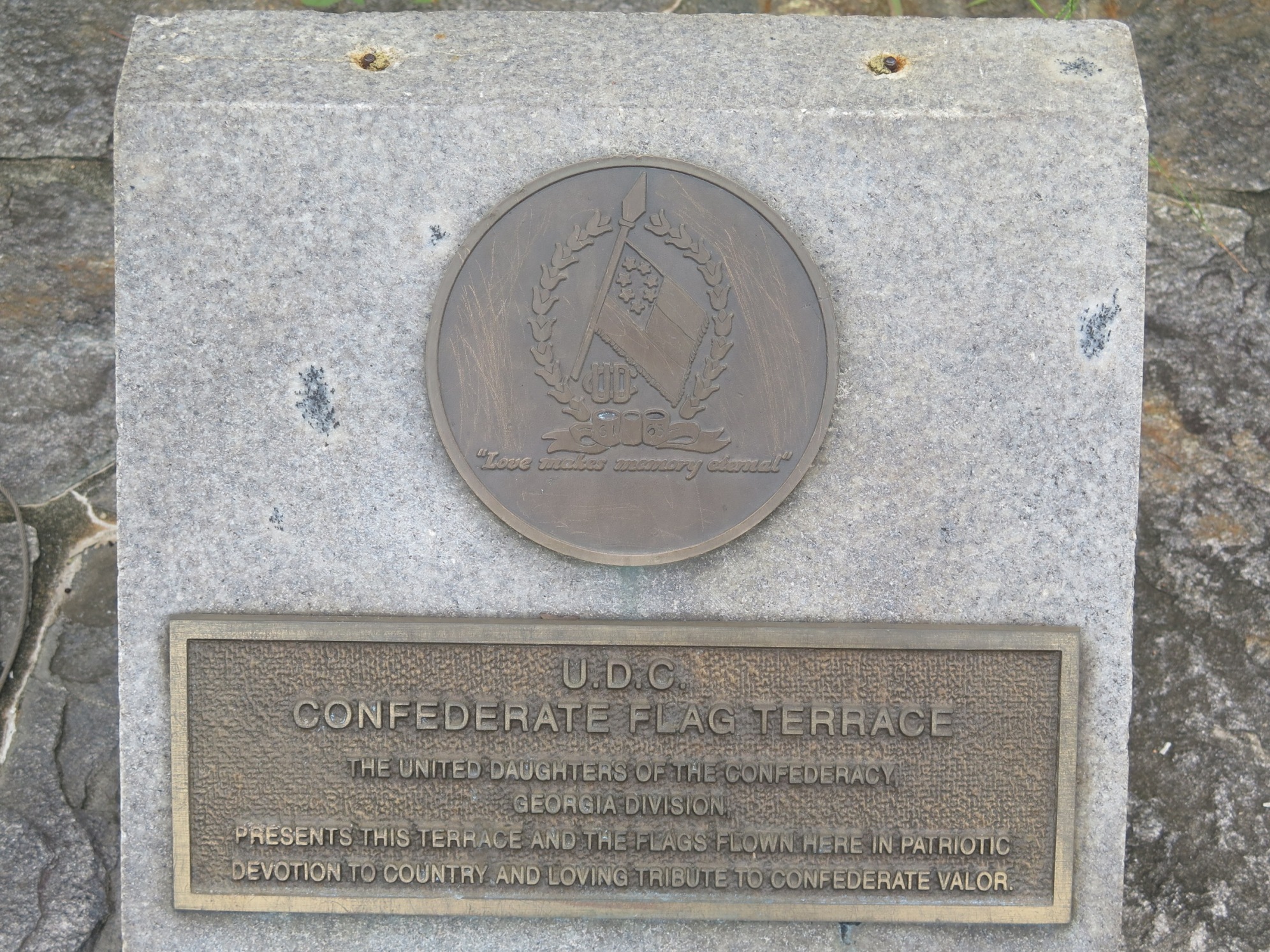 From right to left are first the 3 national flags of the Confederacy. The Stars and Bars at far right (7 stars for the states that seceded before Ft. Sumter) was considered too similar to the Union flag and was replaced in 1863 by the second one. When the second flag was limp, it could appear all white like a truce signal and was so replaced late in the war by the third flag with the vertical red stripe. The familiar battle flag is at far left.

Century old graffiti on the climb up: 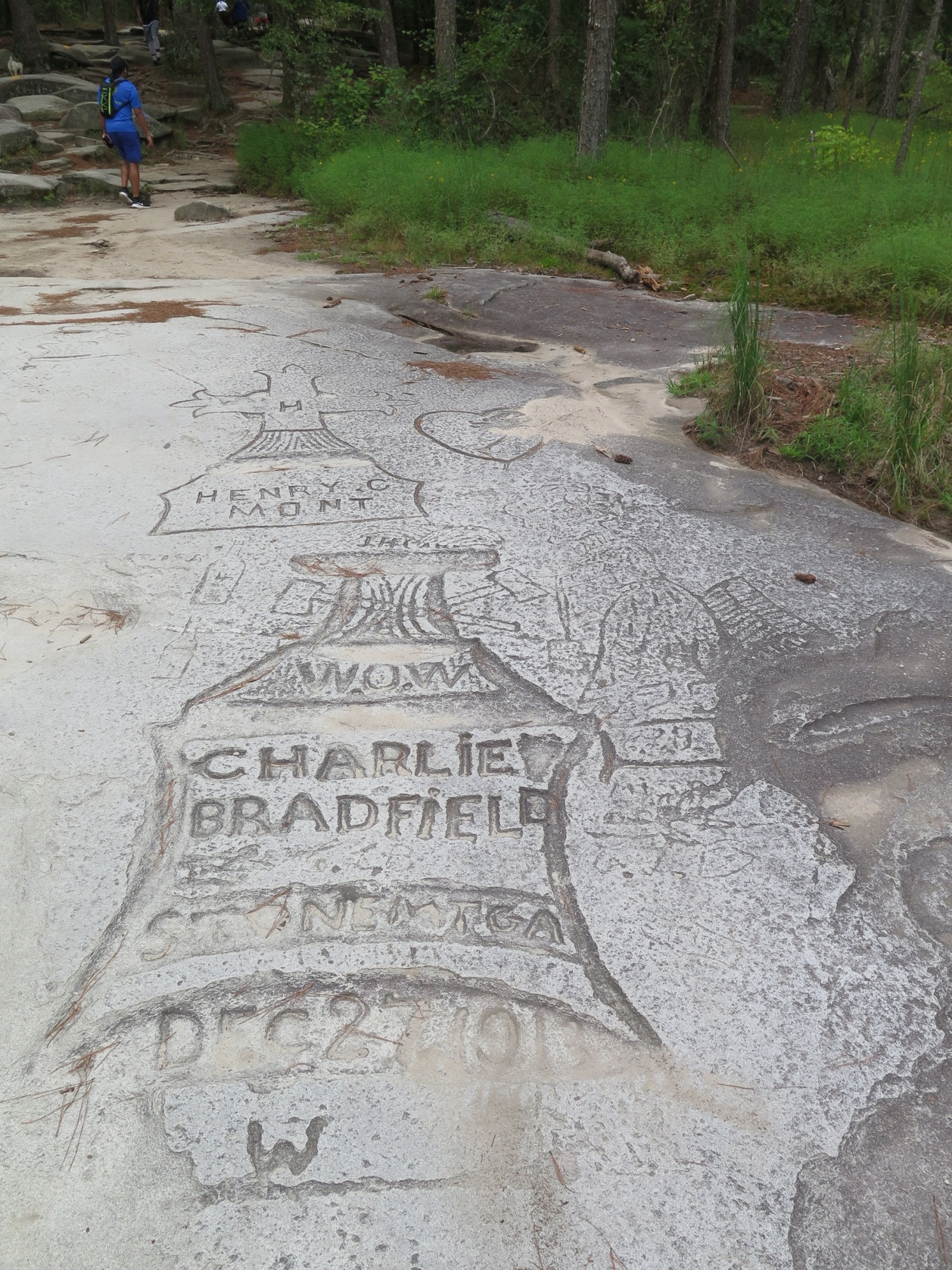 We chose the steeper route looker's left to climb as it was less congested. 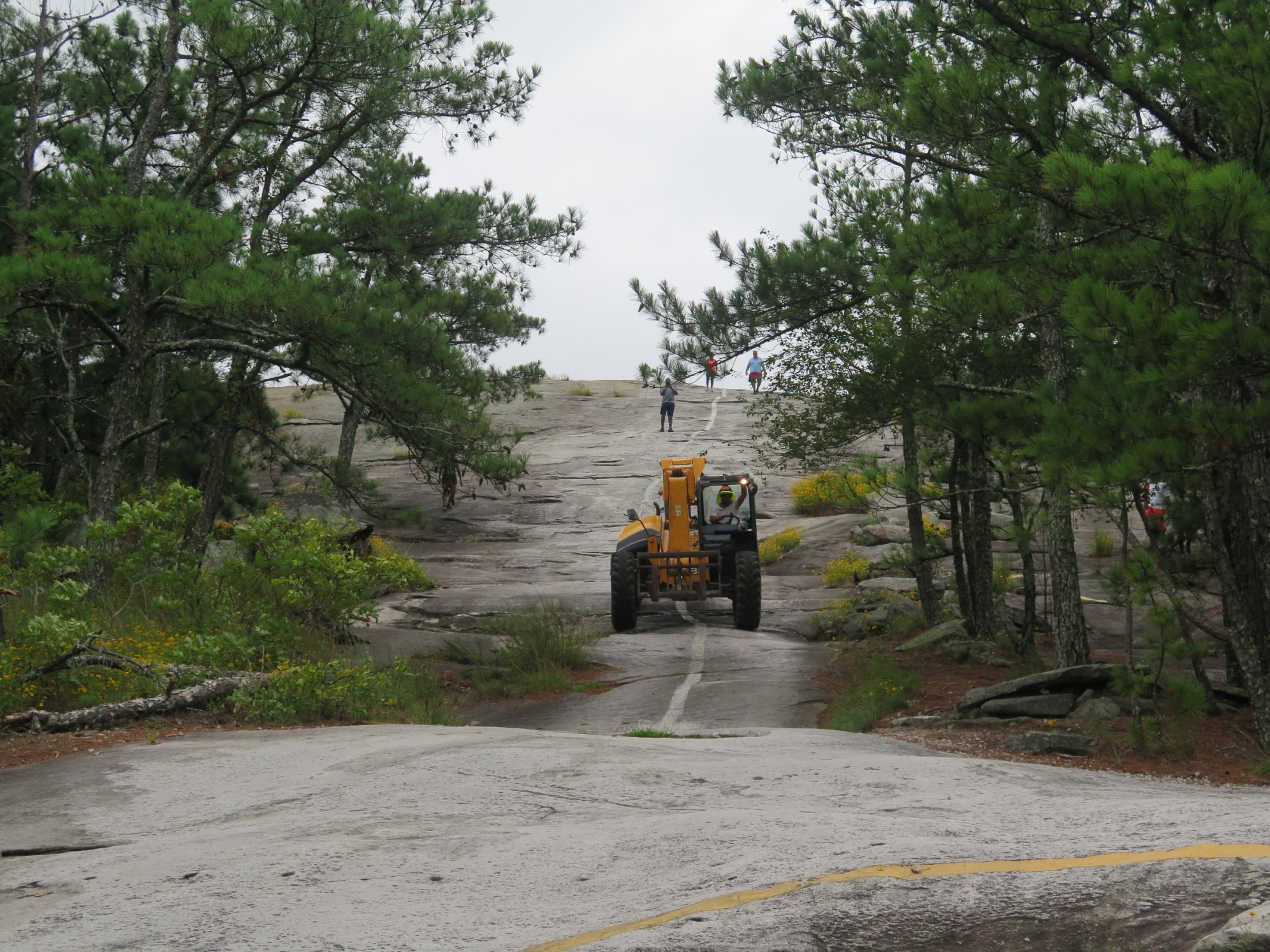 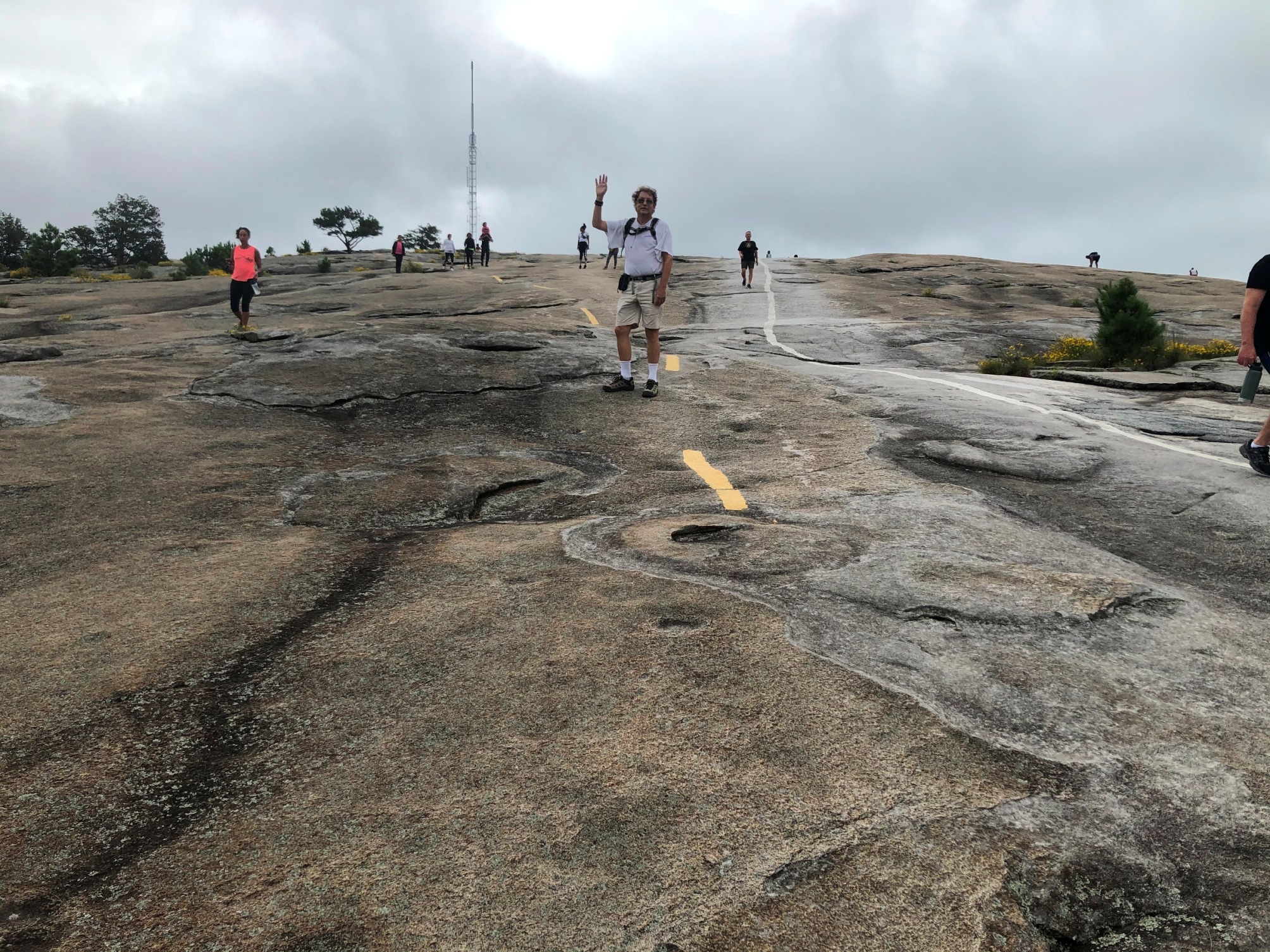 The view west to Atlanta was hazy. 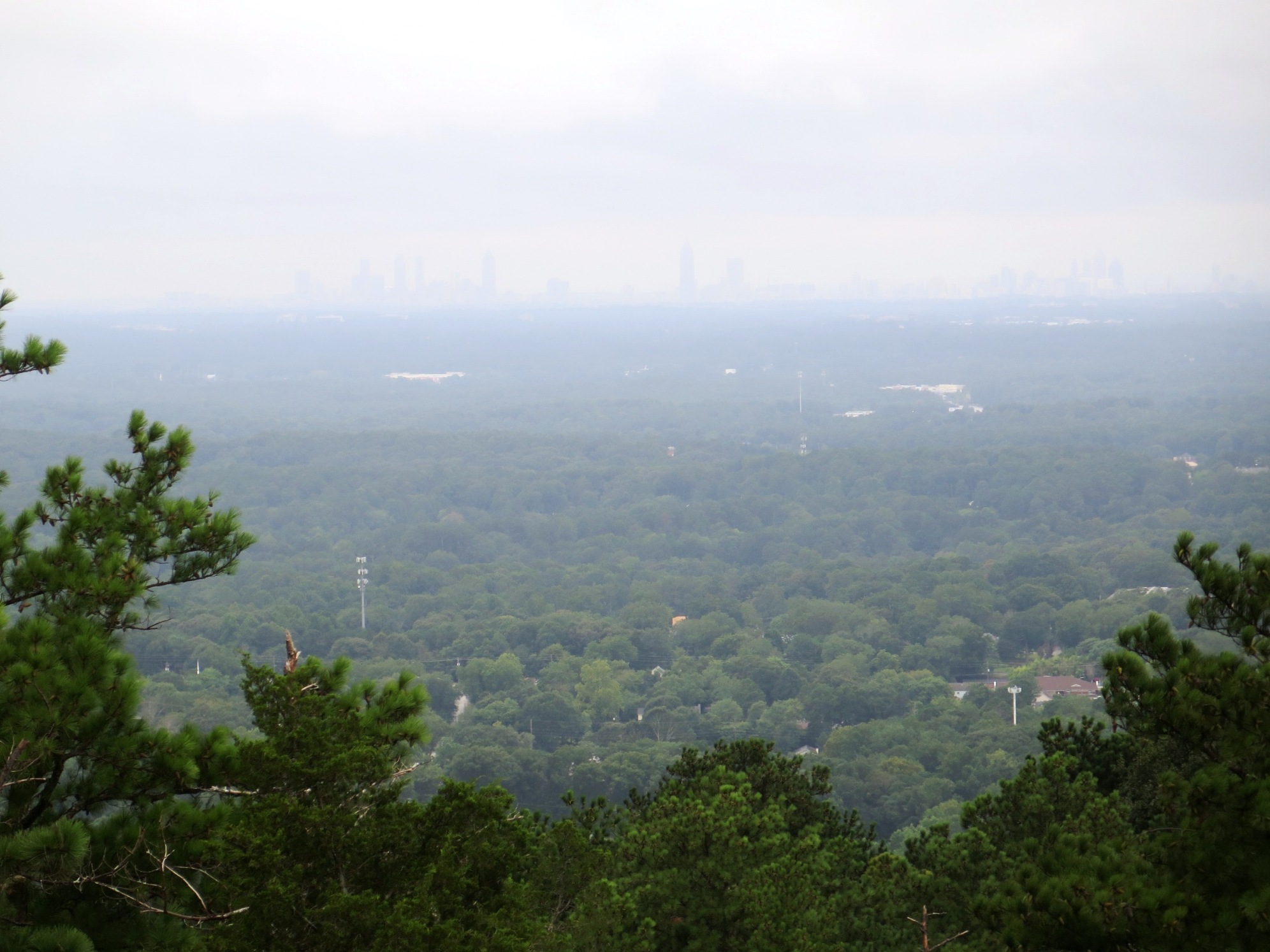 Top of the mountain tram station and Stone Mt. daisies. 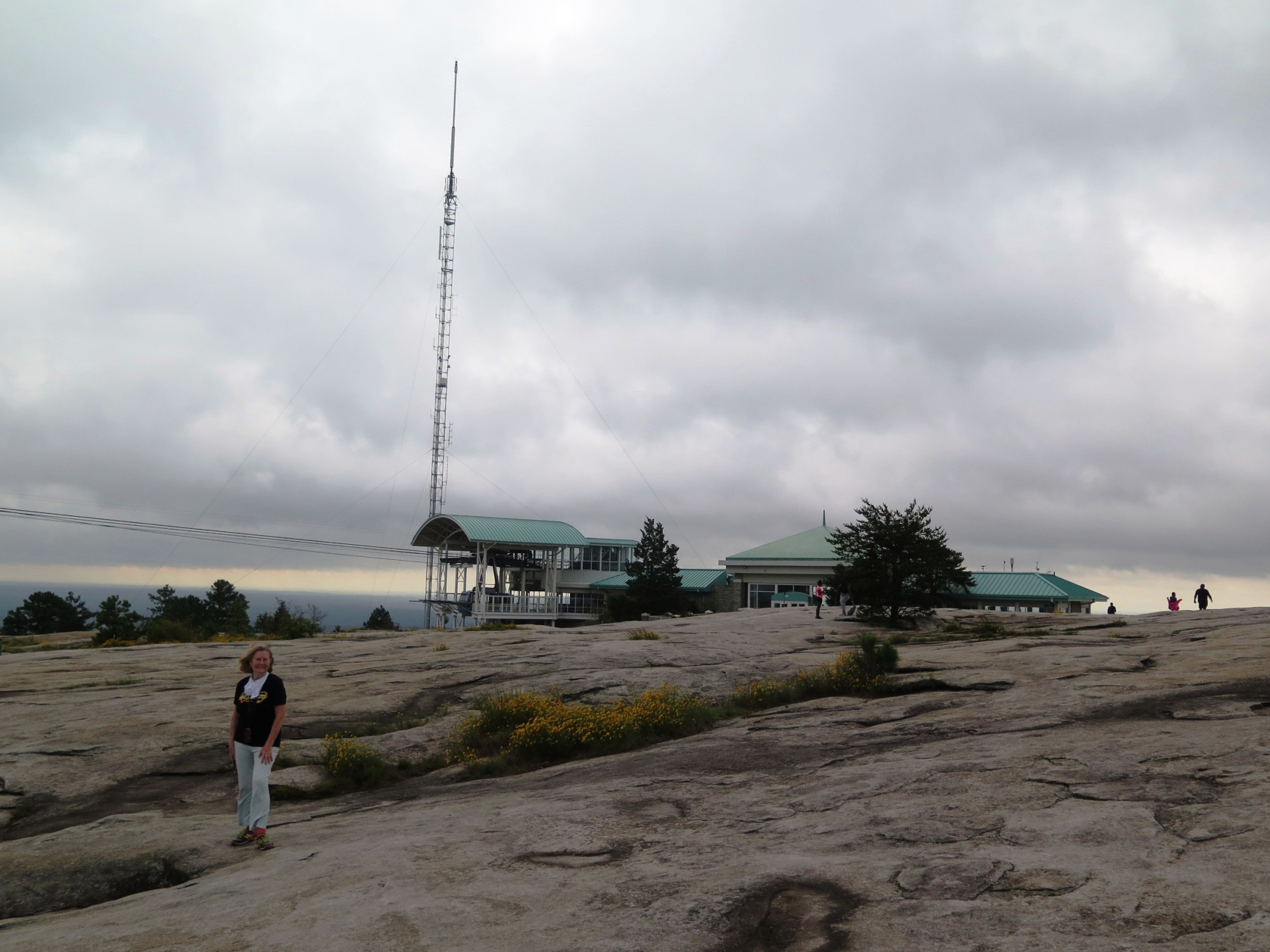 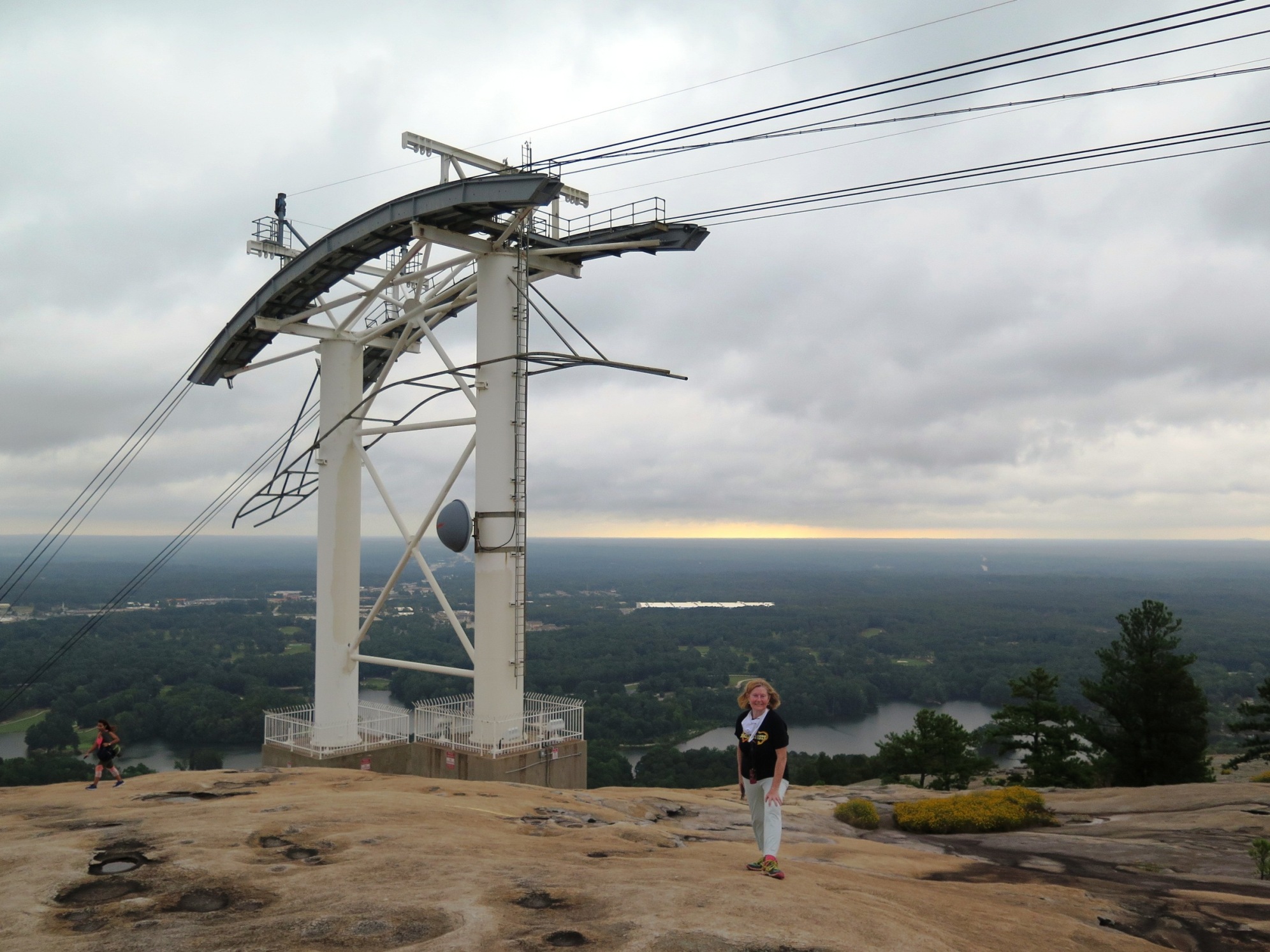 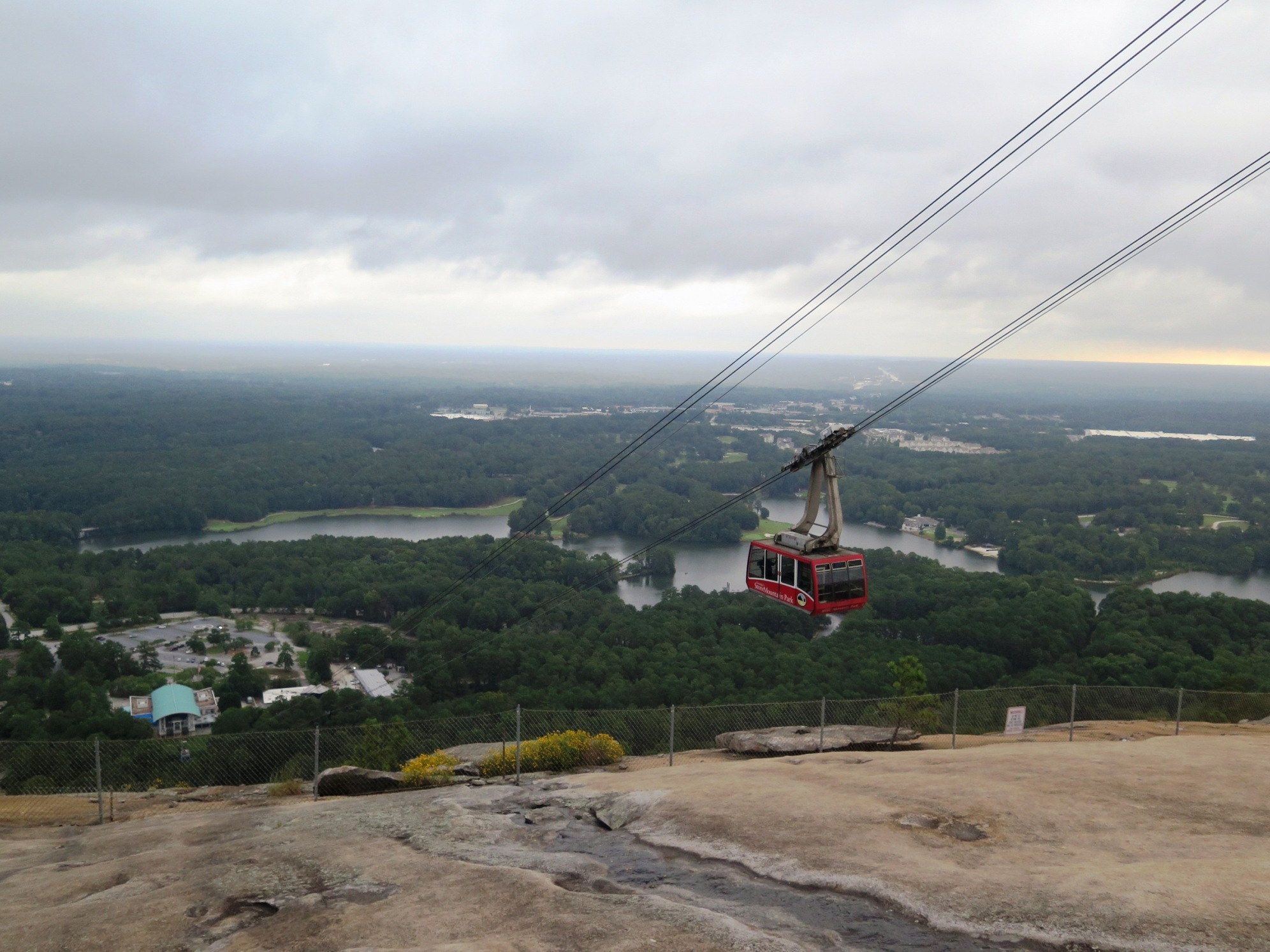 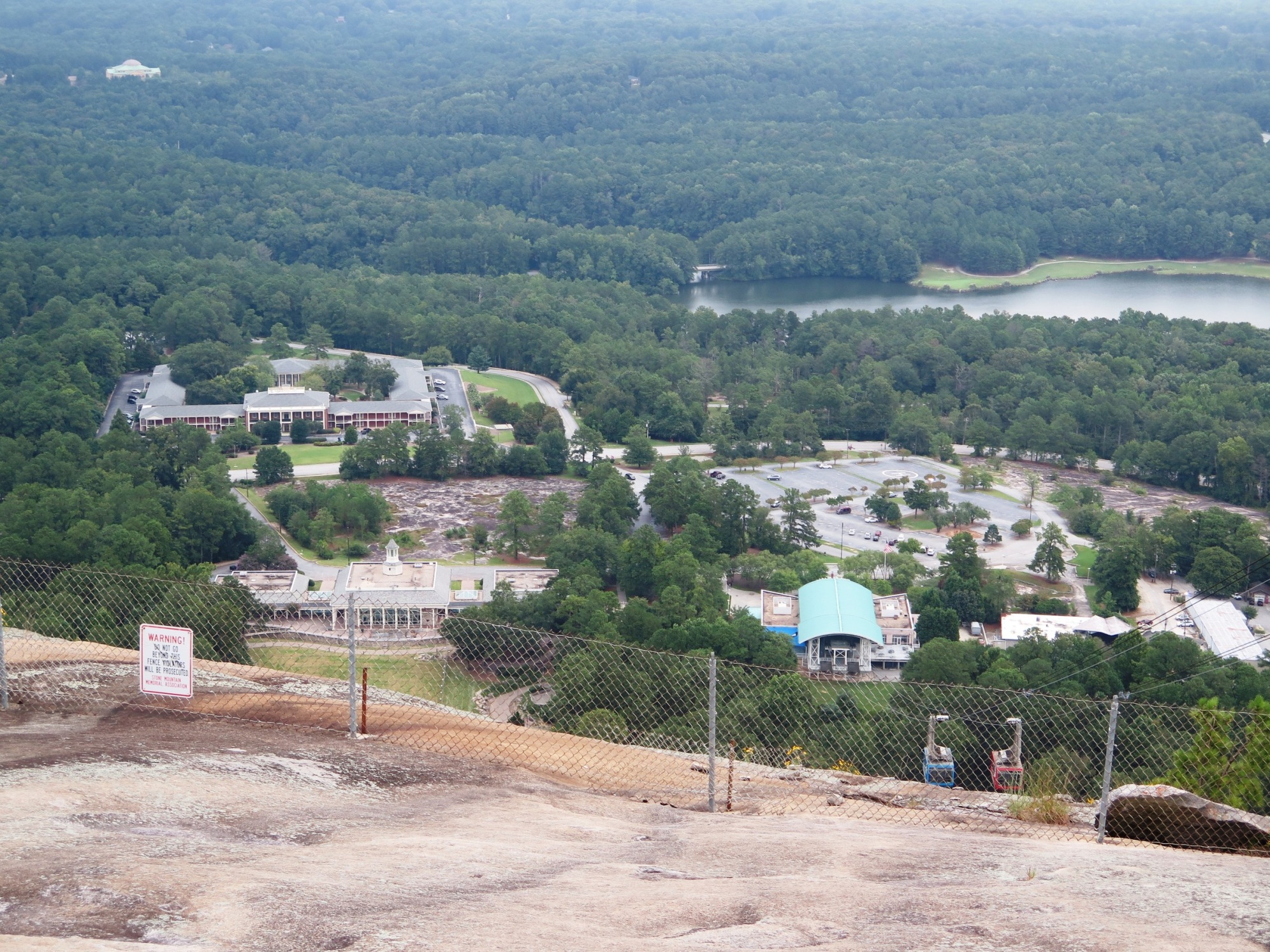 Stone Mt. Inn where we stayed is at left.

This was the largest pond on top of the mountain. 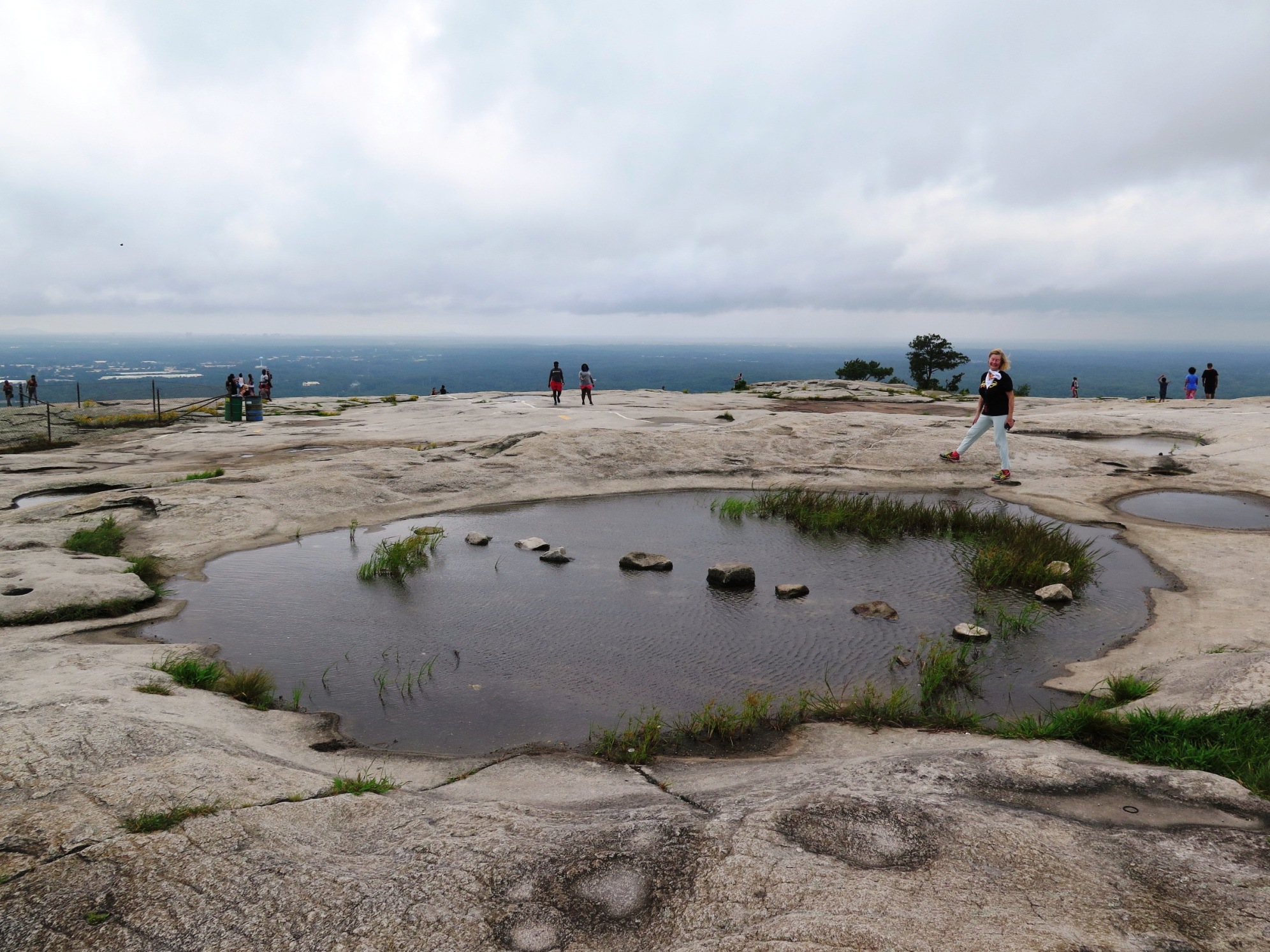 We descended the more gradual route that was much more popular. 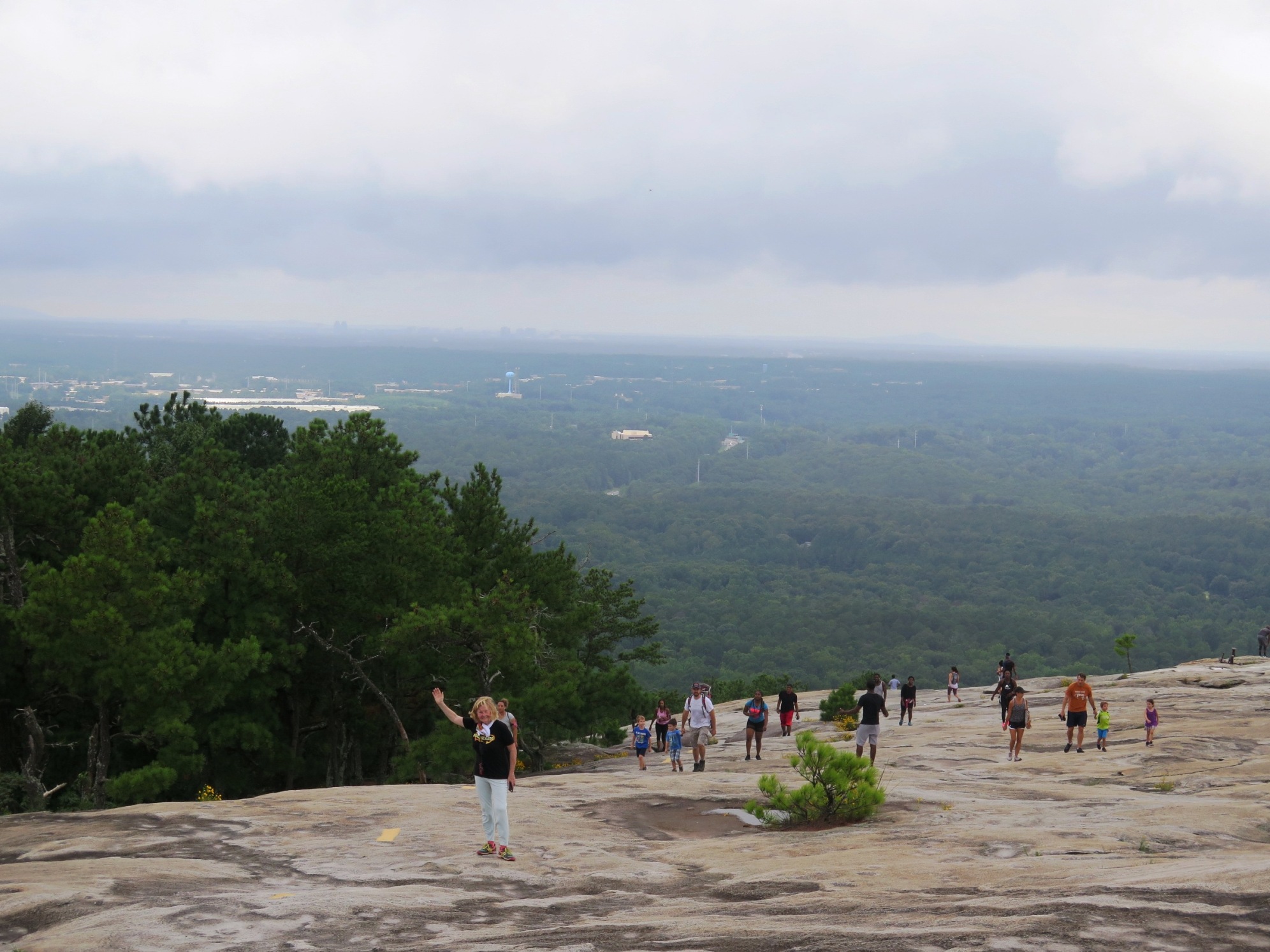 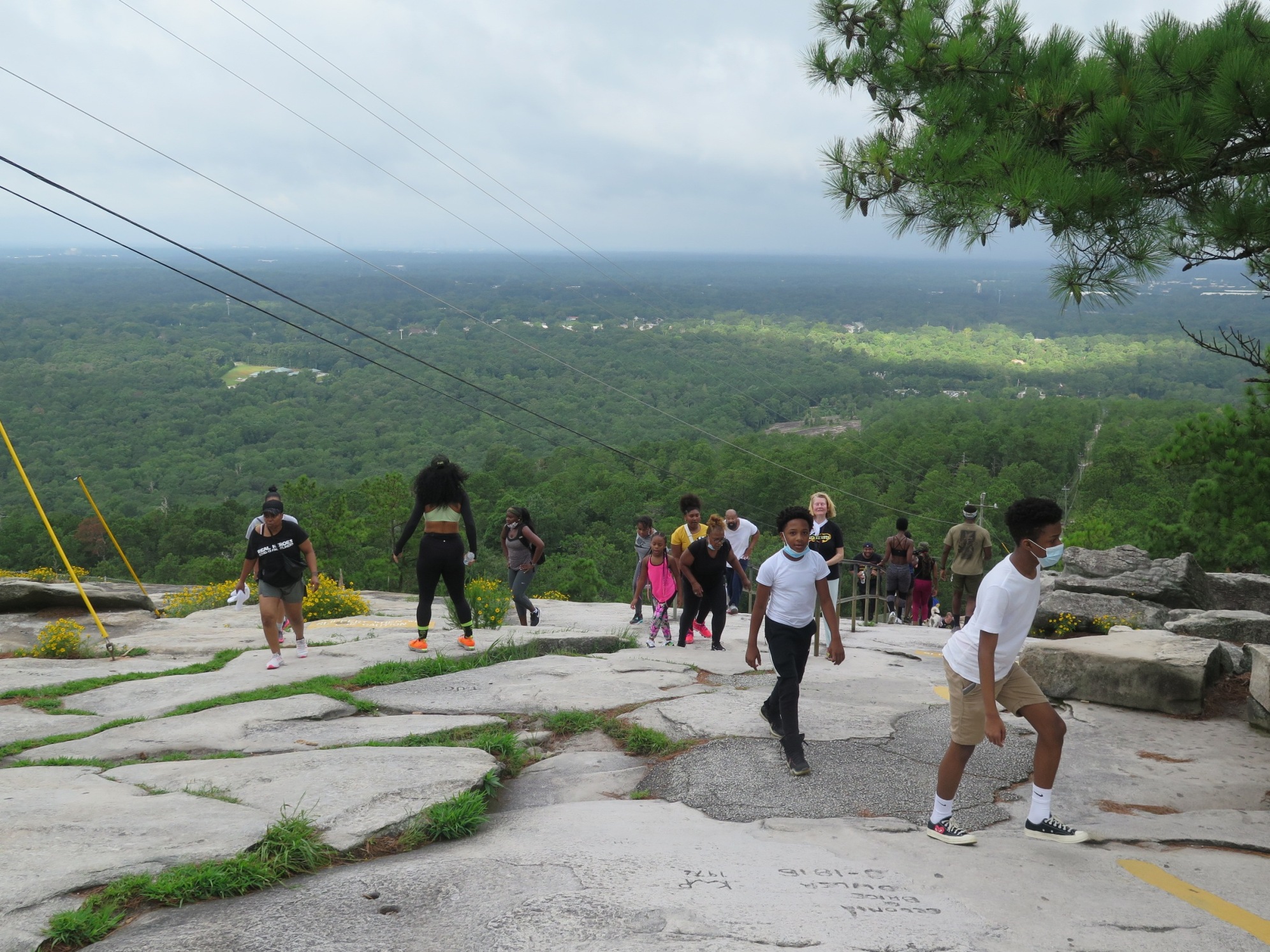 One of the locals told us there hadn't been a Saturday morning more comfortable in over two months.

We moved to the north side. Parking was at a small kiddie amusement park. 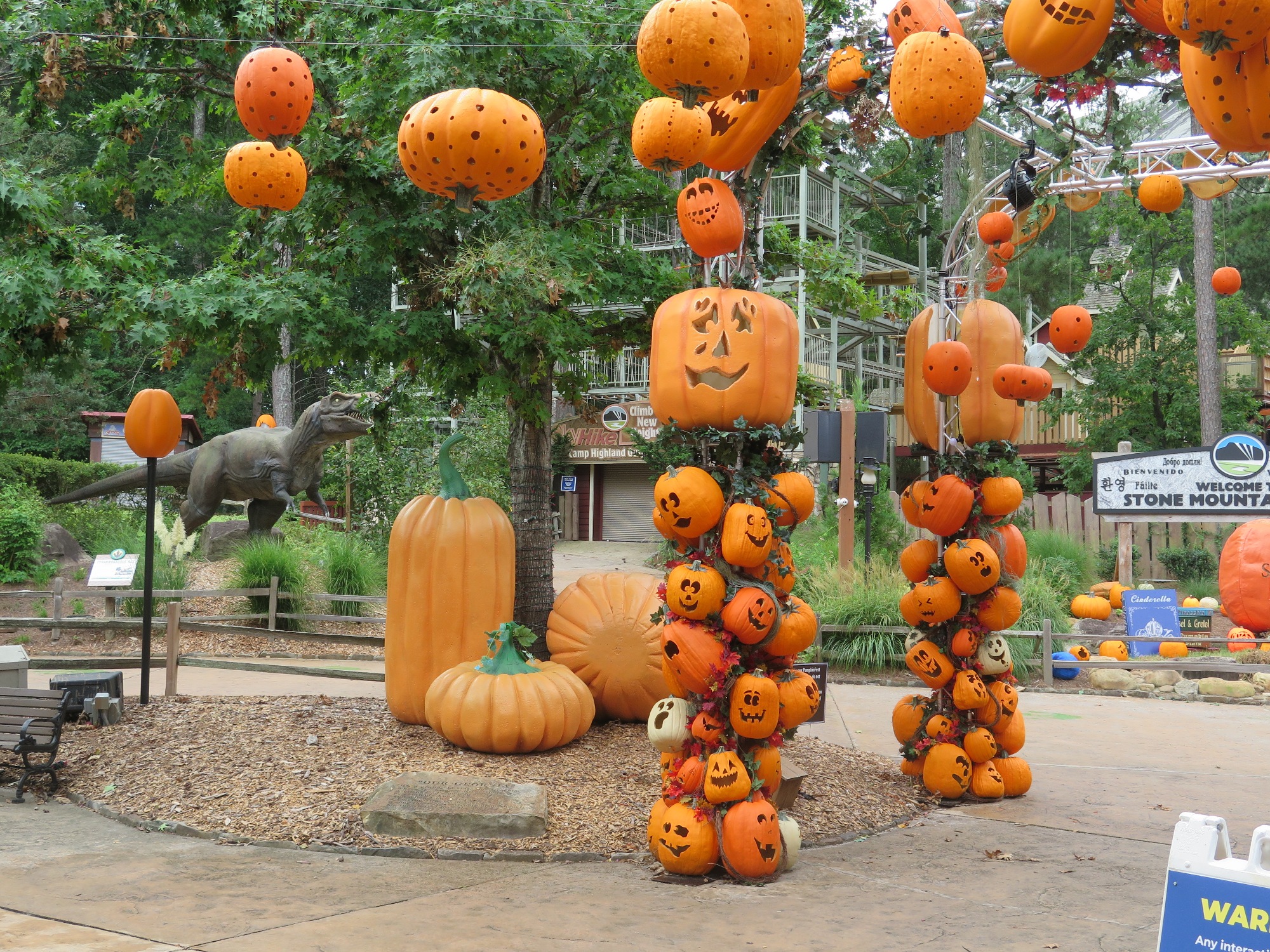 We crossed over to the Confederate memorial. 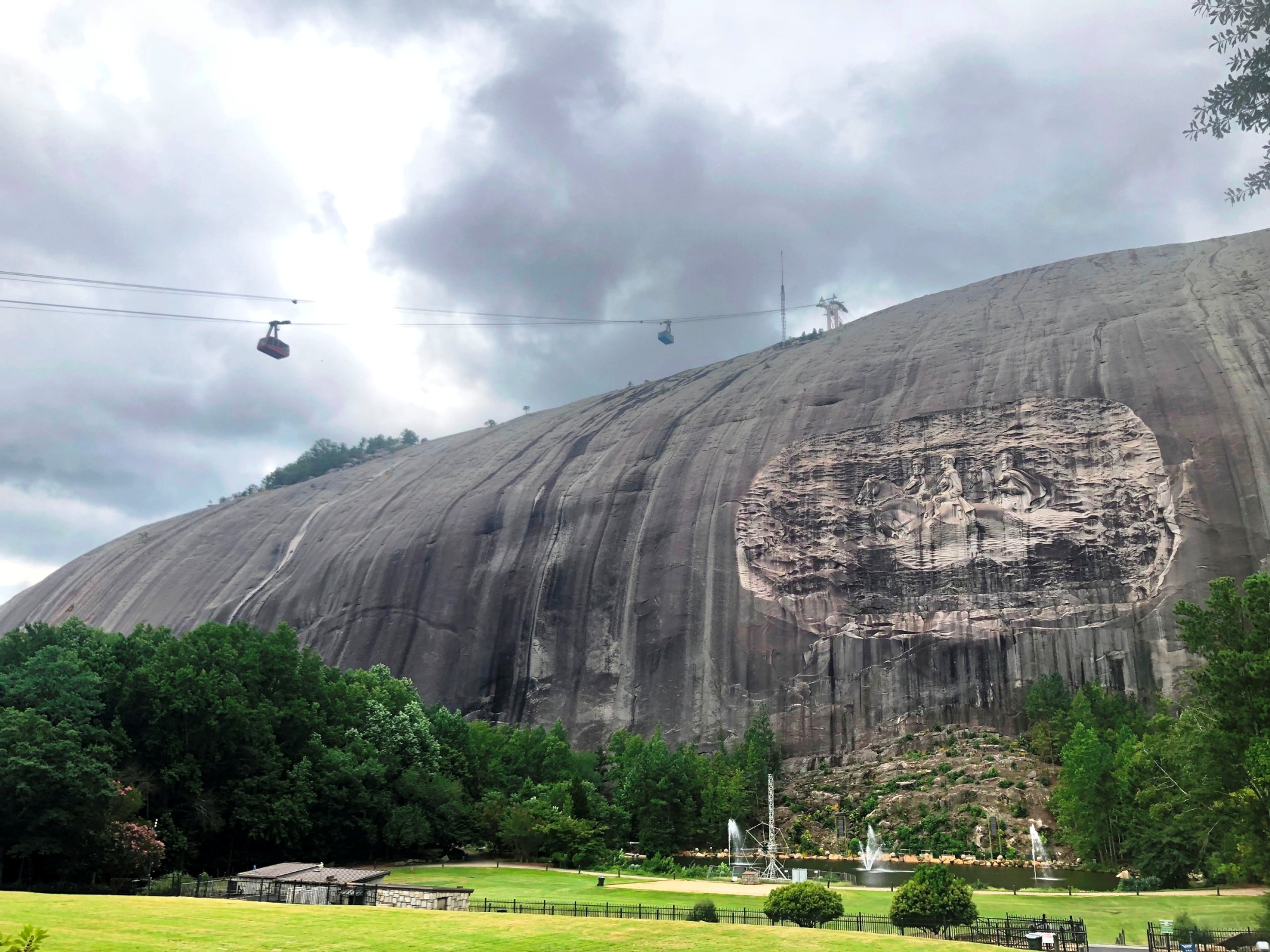 Each side of the lawn is lined with displays for each Confederate state. 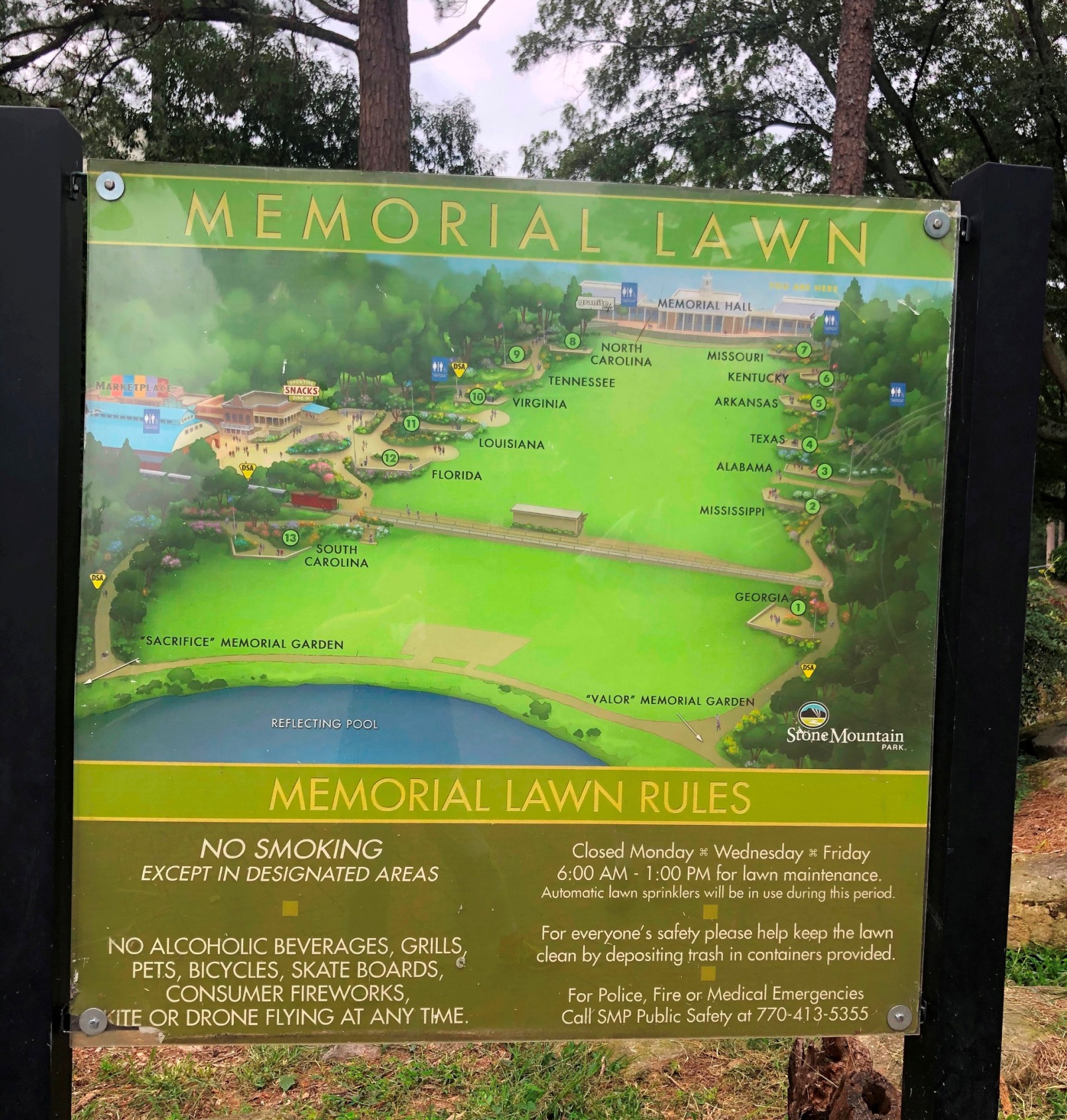 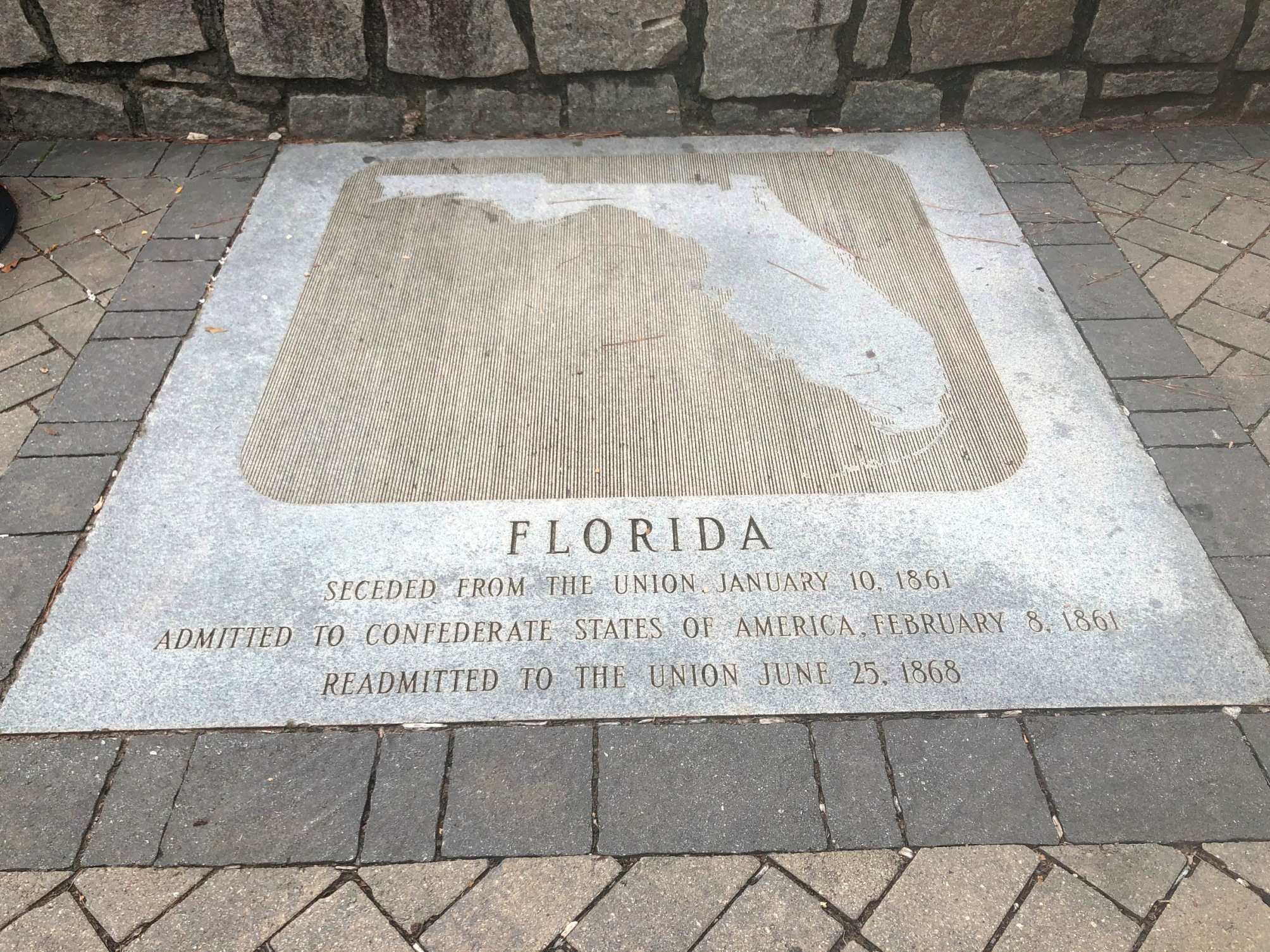 There were plaques with more info. Tennessee seceded only by referendum. The other states seceded by lopsided vote of the state legislatures, though many also had ratifying referenda. Virginia's 88-55 vote was the closest. There were enough dissidents in Missouri and Kentucky for those states to have displays here. 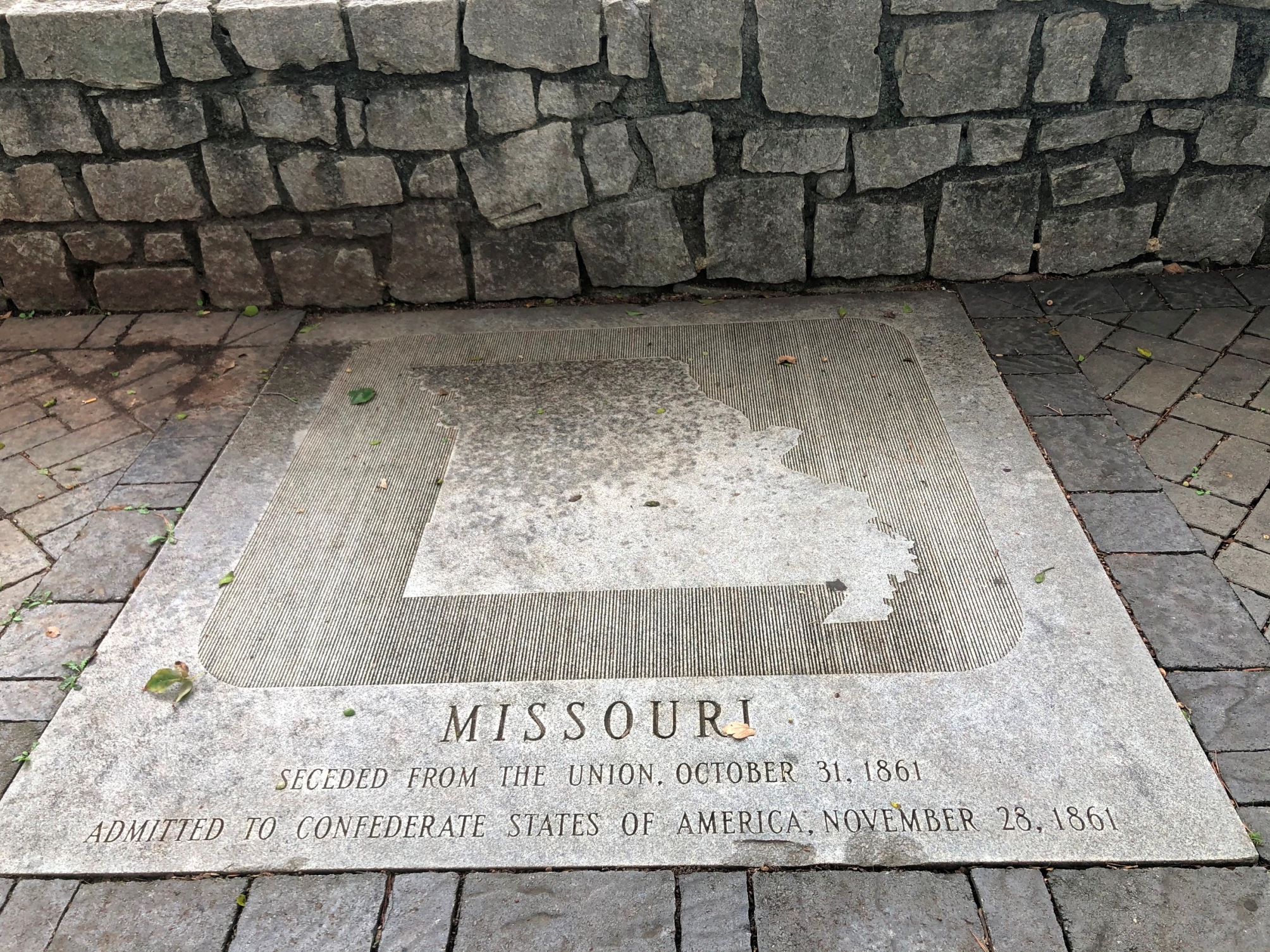 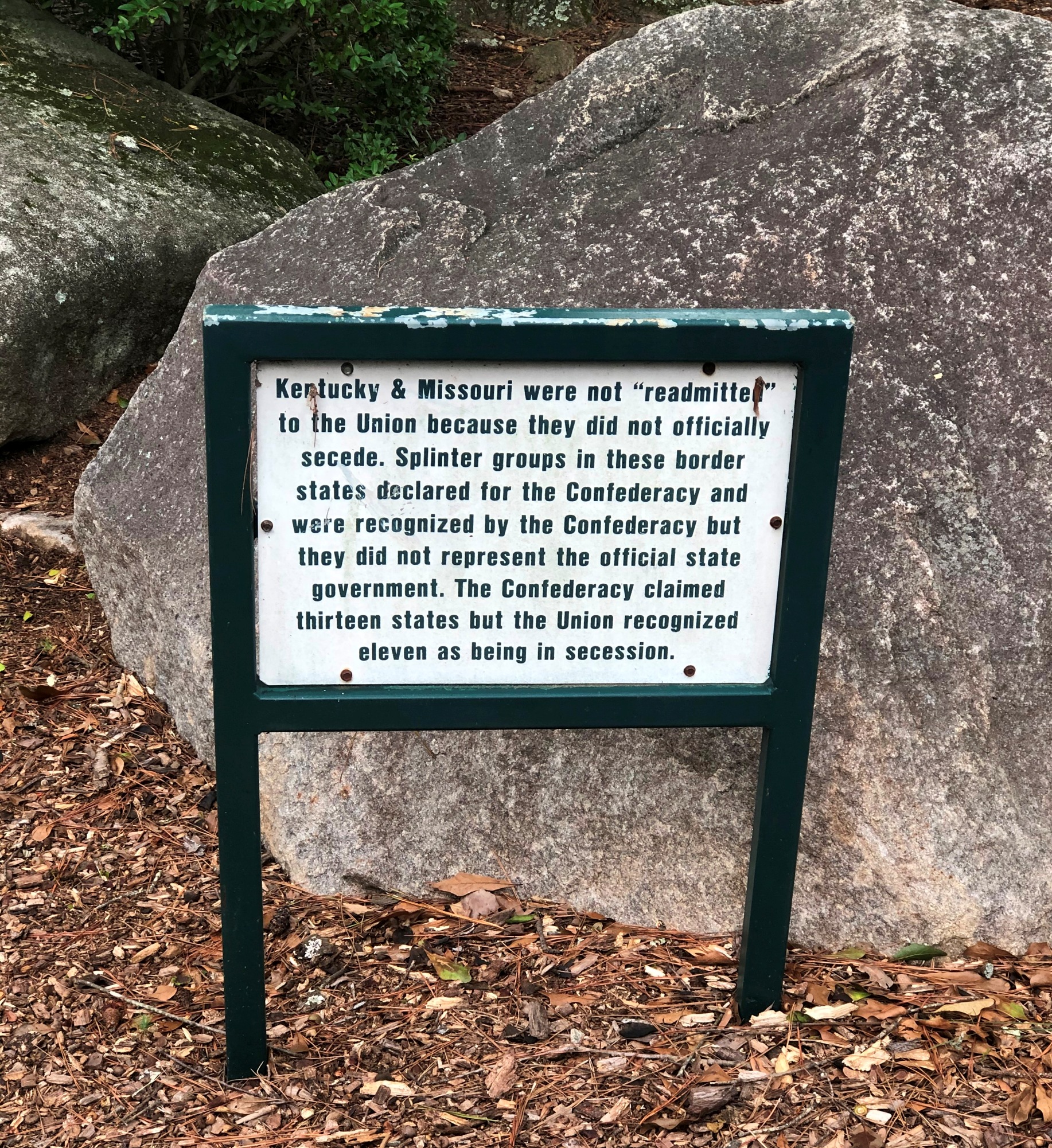 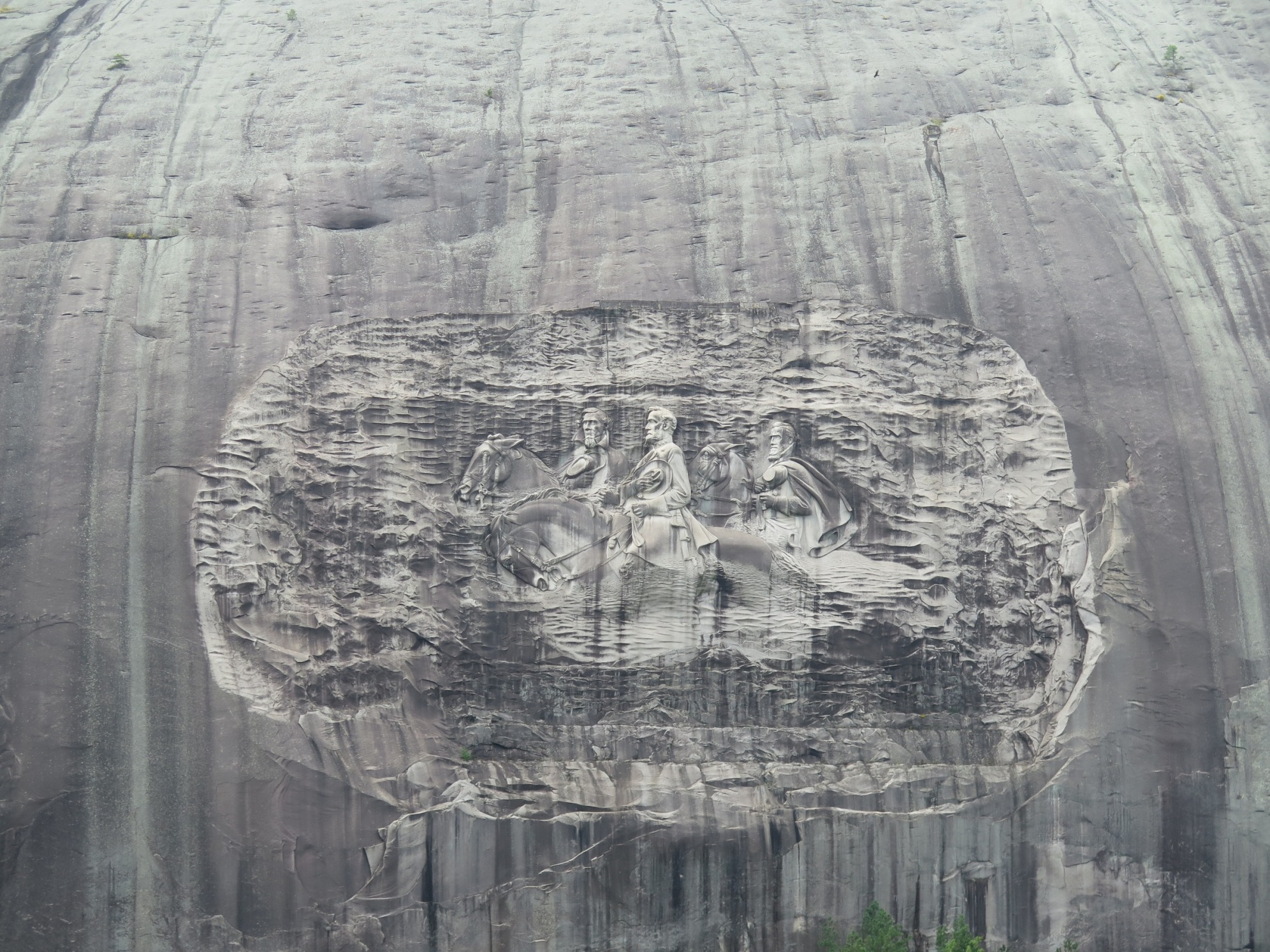 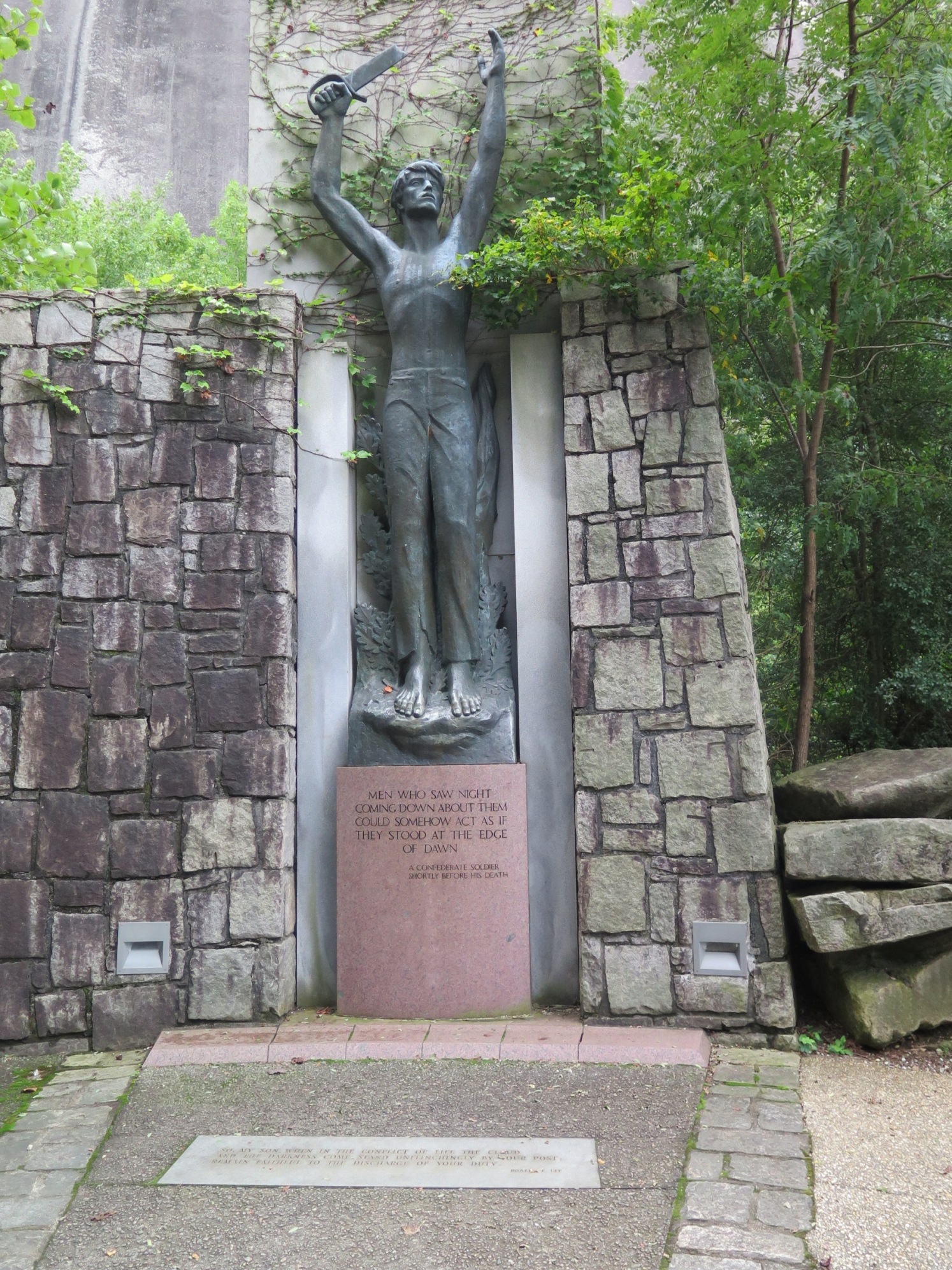 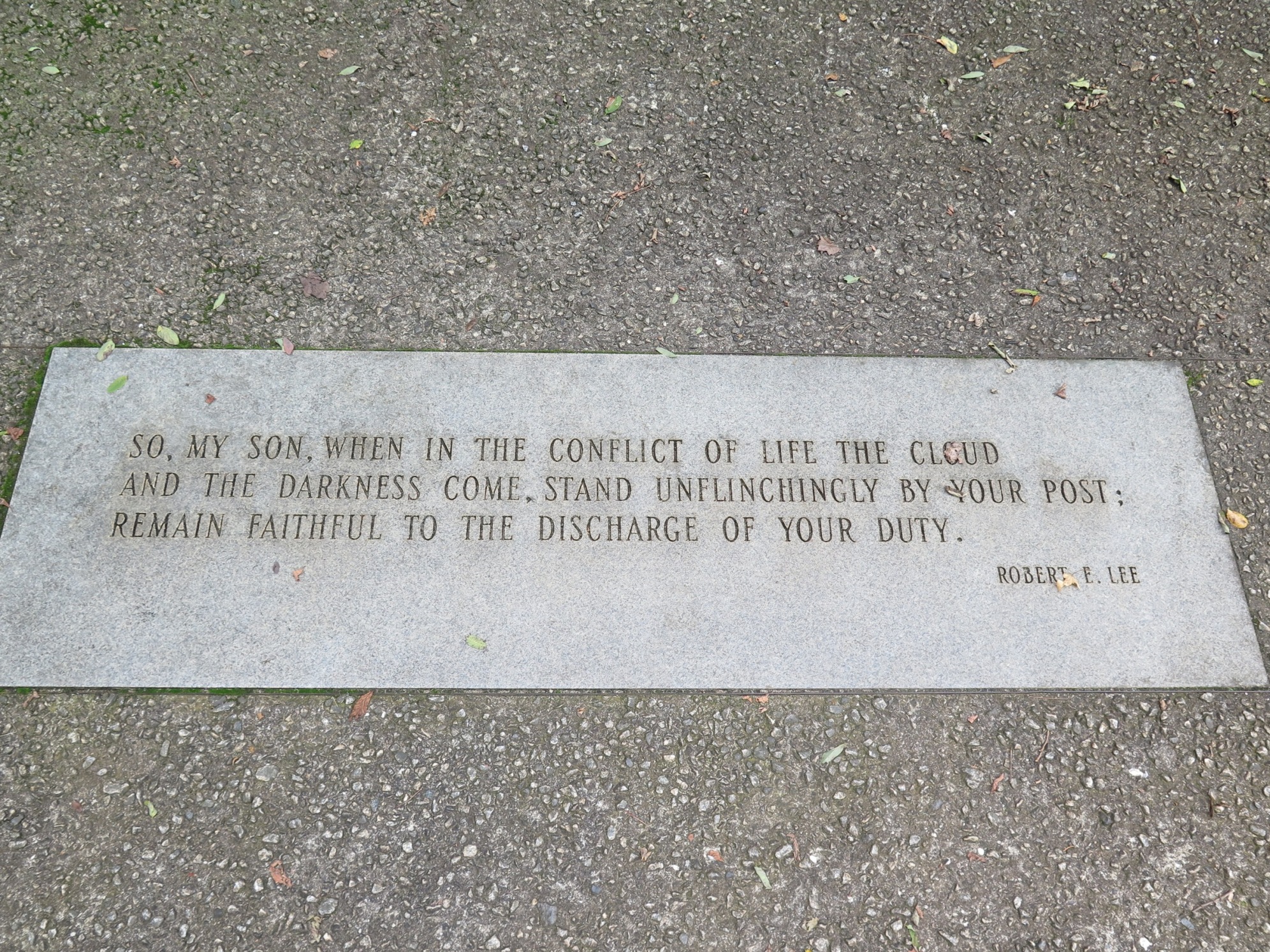 There were other engravings. I found this one ironic. 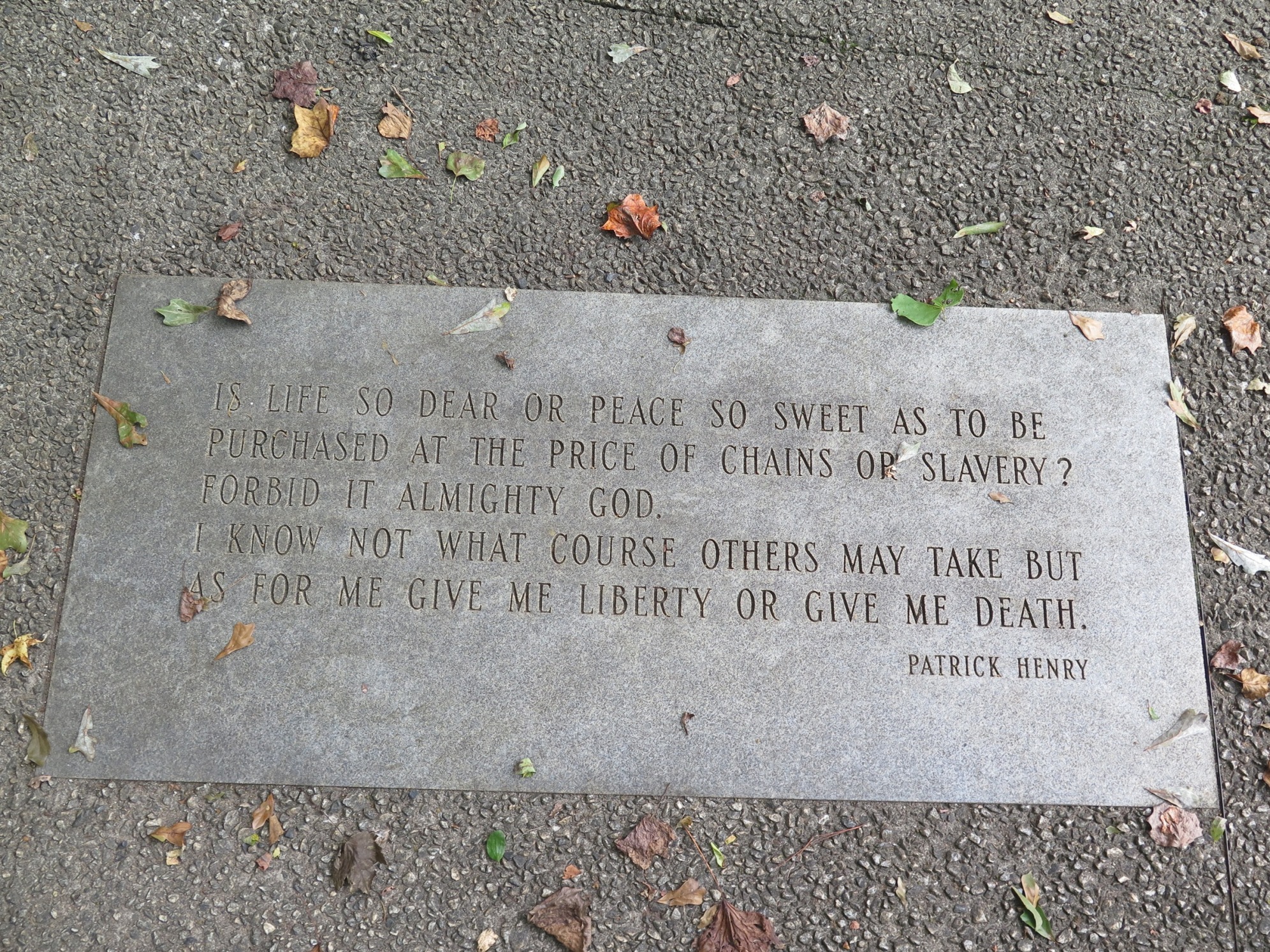 I'm not in favor of sandblasting, as suggested by Stacey Abrams. But a few additional plaques describing the historical contest of Stone Mt. would be illuminating to visitors.

1) The second revival of the Ku Klux Klan was kicked off by a cross burning on the top of Stone Mt. on Thanksgiving 1915. The KKK then had annual Labor Day cross burnings there for 50 years.
2) The carving was designed by the same sculptor as Rushmore but only Lee's head was carved before funding dried up with the Depression and WWII.
3) Interest revived in the 1950's with resistance to the Civil Rights movement and school integration. Georgia's state flag: 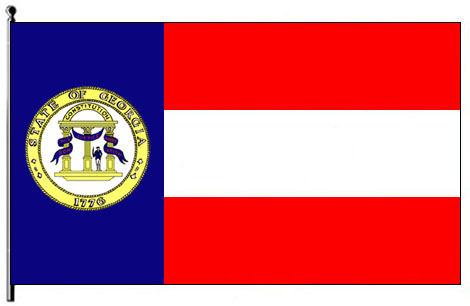 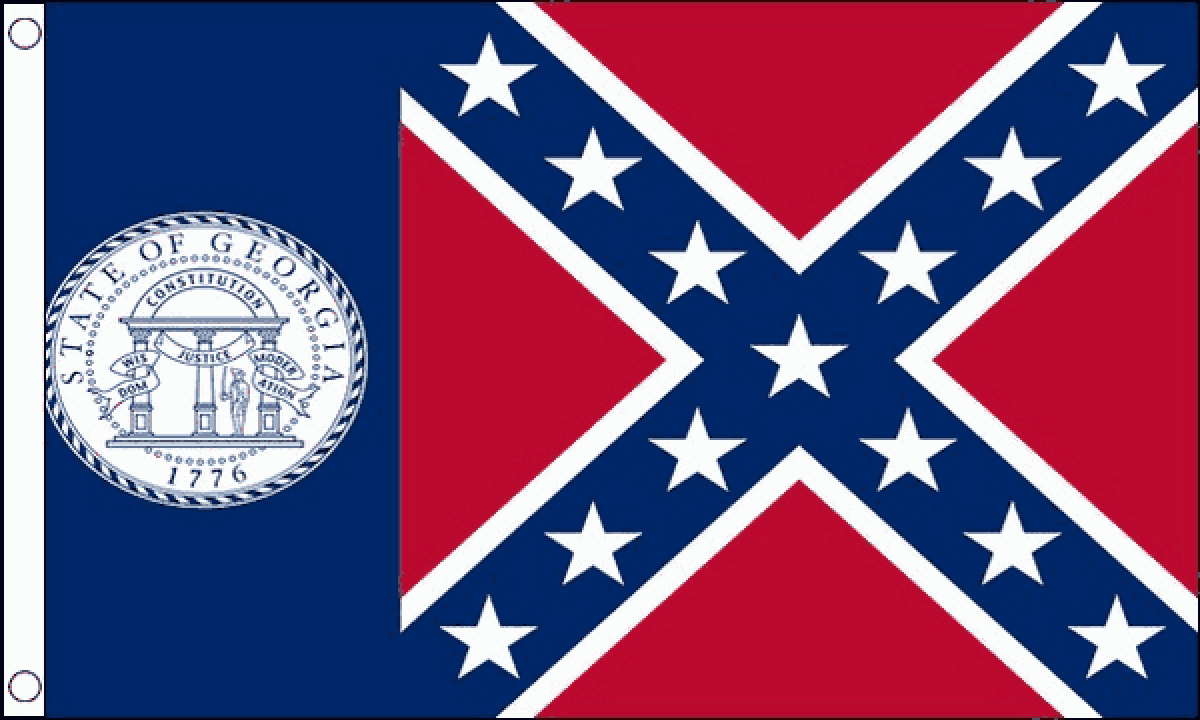 In 1958 the Georgia government bought the mountain and developed the park. The carving was funded privately and completed in 1970.
4) Georgia dedicated the park on April 14, 1965, the 100th anniversary of Lincoln's assassination!!!

Georgia's flag was changed again in 2003. The voters approved this design, which has passing similarities to another flag. :lol: 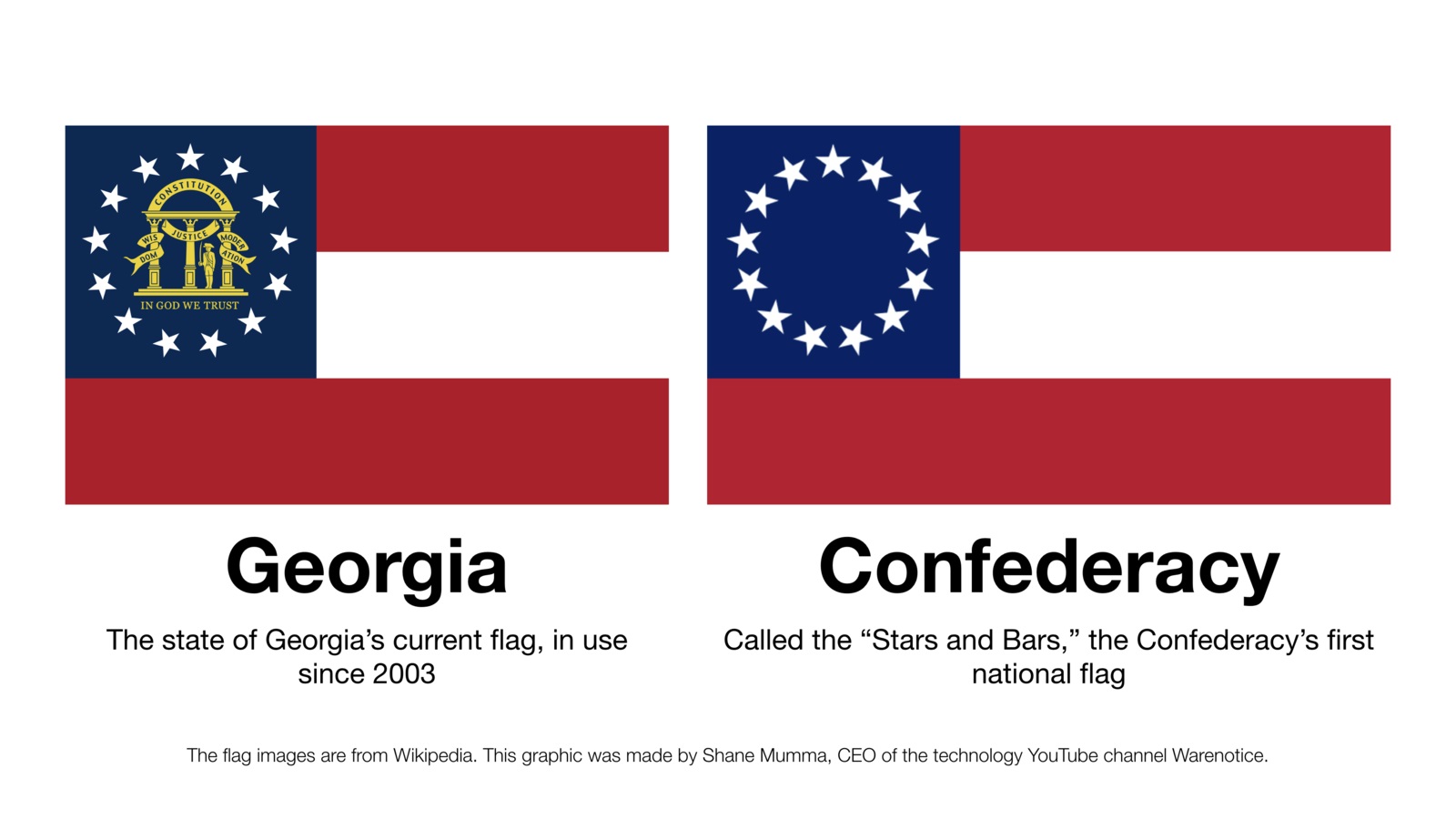 In July admin was camping not far from here in Gatlinburg, Tennessee and Cloudland Canyon, Georgia. How could he have missed this?

I had a fun & interesting first date climbing up Stone Mtn once upon a time when I lived in Hotlanta for 3 years (mid-90's time frame). Never understood so many people in the deep south clinging to the civil war the way they still do. Don't get me wrong, lots of very good people live there (most actually), but the random pockets of overt racism in the deep south was surprising to a small town 'kid' from up north.

Anyway, the actual engraving looks way worse for wear from when I lived down there. It was essentially pristine looking with none of the exterior streaking. They also had a decent part of that whole face streak-free as it was used for laser shows and as a movie projection screen at night. The actual geography of the area is of course enjoyable & fascinating with the monolith and nearby lake, etc...

EMSC":3ptto05z said:
Don't get me wrong, lots of very good people live there (most actually), but the random pockets of overt racism in the deep south was surprising to a small town 'kid' from up north.
Click to expand...

Notice the ethnicity of the majority of locals climbing the mountain in the last picture of Liz descending. It's 825 feet high, about the same as my common exercise hike in the Verdugo Mountains half a block from home.


EMSC":3ptto05z said:
Anyway, the actual engraving looks way worse for wear from when I lived down there. It was essentially pristine looking with none of the exterior streaking. They also had a decent part of that whole face streak-free as it was used for laser shows and as a movie projection screen at night.
Click to expand...

Per wikipedia, the laser shows are the most popular event at Stone Mt. However they have been cancelled during the pandemic. Even Uluru has vertical streaking from rain runoff paths. And Stone Mt. gets over 4x as much rain.
You must log in or register to reply here.
Share:
Facebook Twitter Reddit Pinterest Tumblr WhatsApp Email Share Link
Top