Staff member
Climbing Uluru is controversial. The aborigines of Australia were treated at least as badly as Native Americans through the 1960's. One of the changes made since then was to return Uluru - Kata Tjuda National Park to aboriginal ownership on October 26, 1985. Since 75% of tourists prior to 1985 climbed Uluru, the agreement with the Australian government specified that climbing would remain an option in order to not discourage tourism. The policy could be reviewed if the percentage of climbers fell below 20%.

30 years of not promoting climbing plus alternative tourist options succeeded in dropping the climbing percentage to 16% by 2015. So in 2017 the announcement was made that the Uluru climbing will be closed permanently October 26, 2019. To no surprise this has made the climb much more popular in 2019. We were there during peak tourist season, plus it was a school holiday week so there were a lot of kids on the rock, some as young as 6 years old.

Liz and I are not big on political correctness and seized this opportunity before permanent closure. To most North Americans the danger in official announcements seems exaggerated. The total vertical is 1,142 feet with a peak elevation of 2,831 feet. The steepest part is at the bottom and has a heavy chain cable for climbers to use. I saw this as an analogy to the cables and 4x4 steps at the top of Half Dome, which I climbed in 1981. However you have to climb 4,000 vertical before you get to Half Dome's cables, which I'm sure weeds out nearly everyone not capable. There is more potential for unprepared people to get in trouble on Uluru.

On July 15 we checked out the base of the climb on the NW side about 5:40PM, half an hour before sunset. 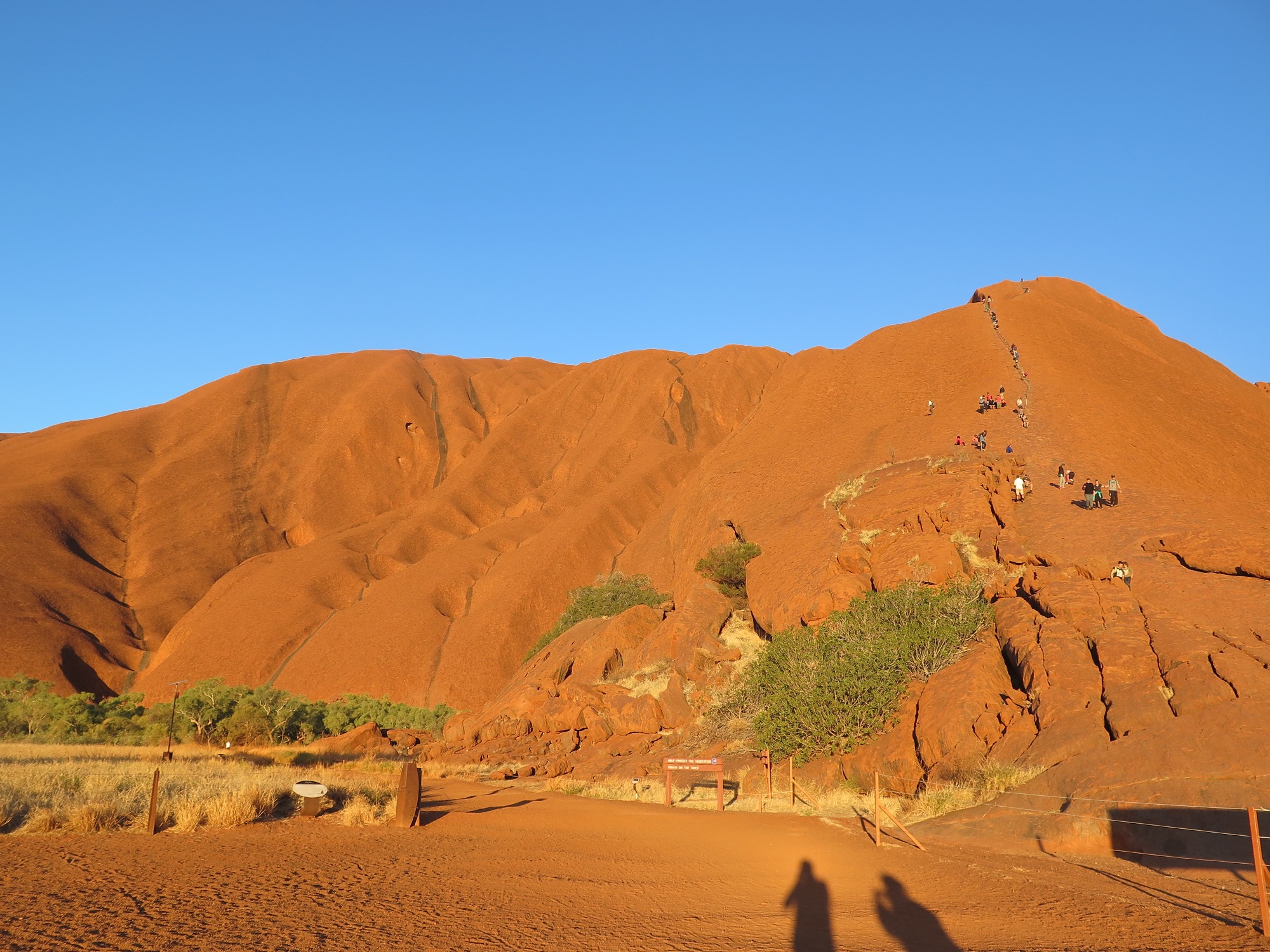 The gate is closed at 4PM, but many people stay on the rock until close to sunset.

The gate opens (weather permitting) at sunrise, which we were viewing on the opposite side. We parked about 8:30, with early climbers silhouetted. 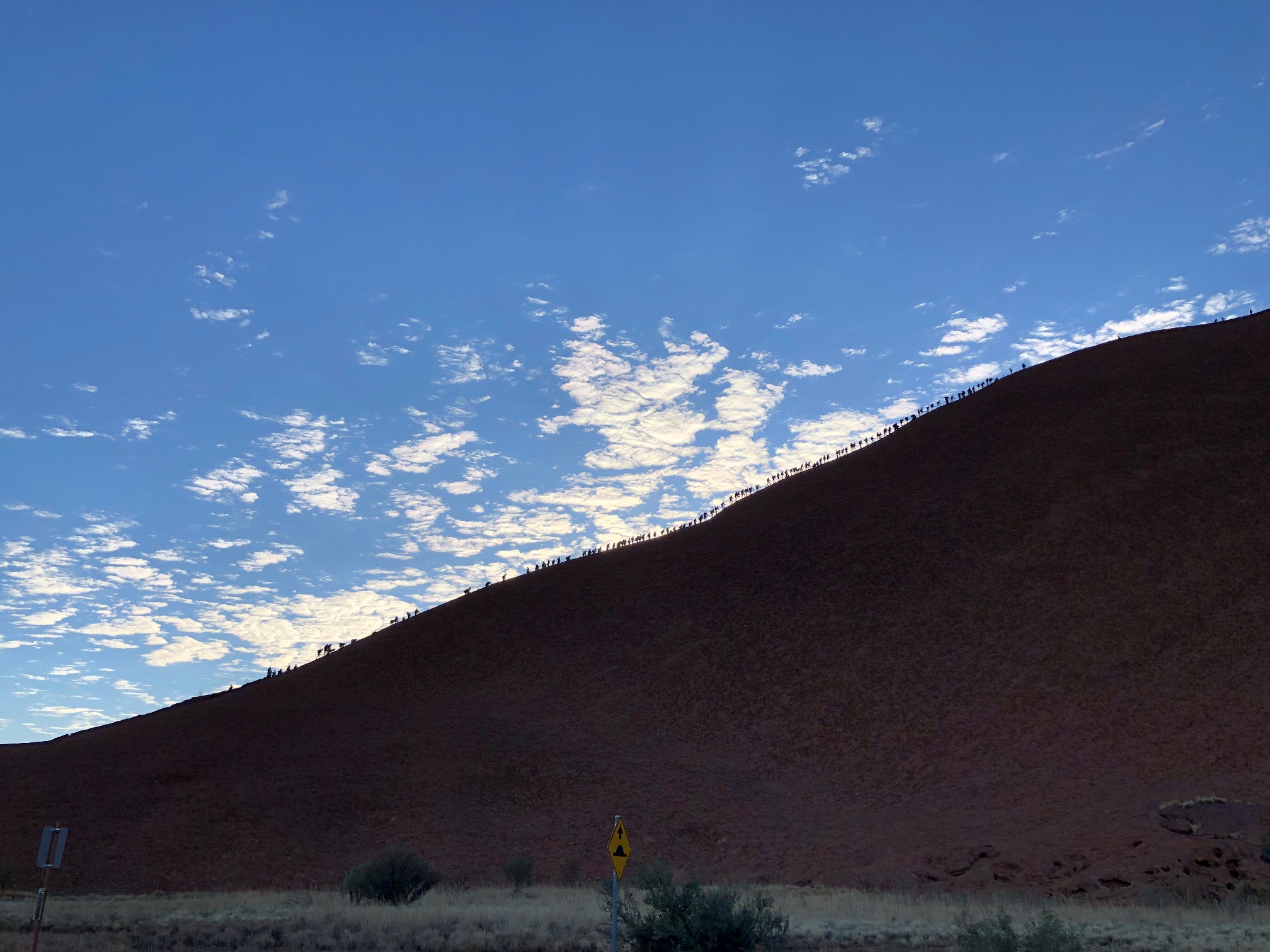 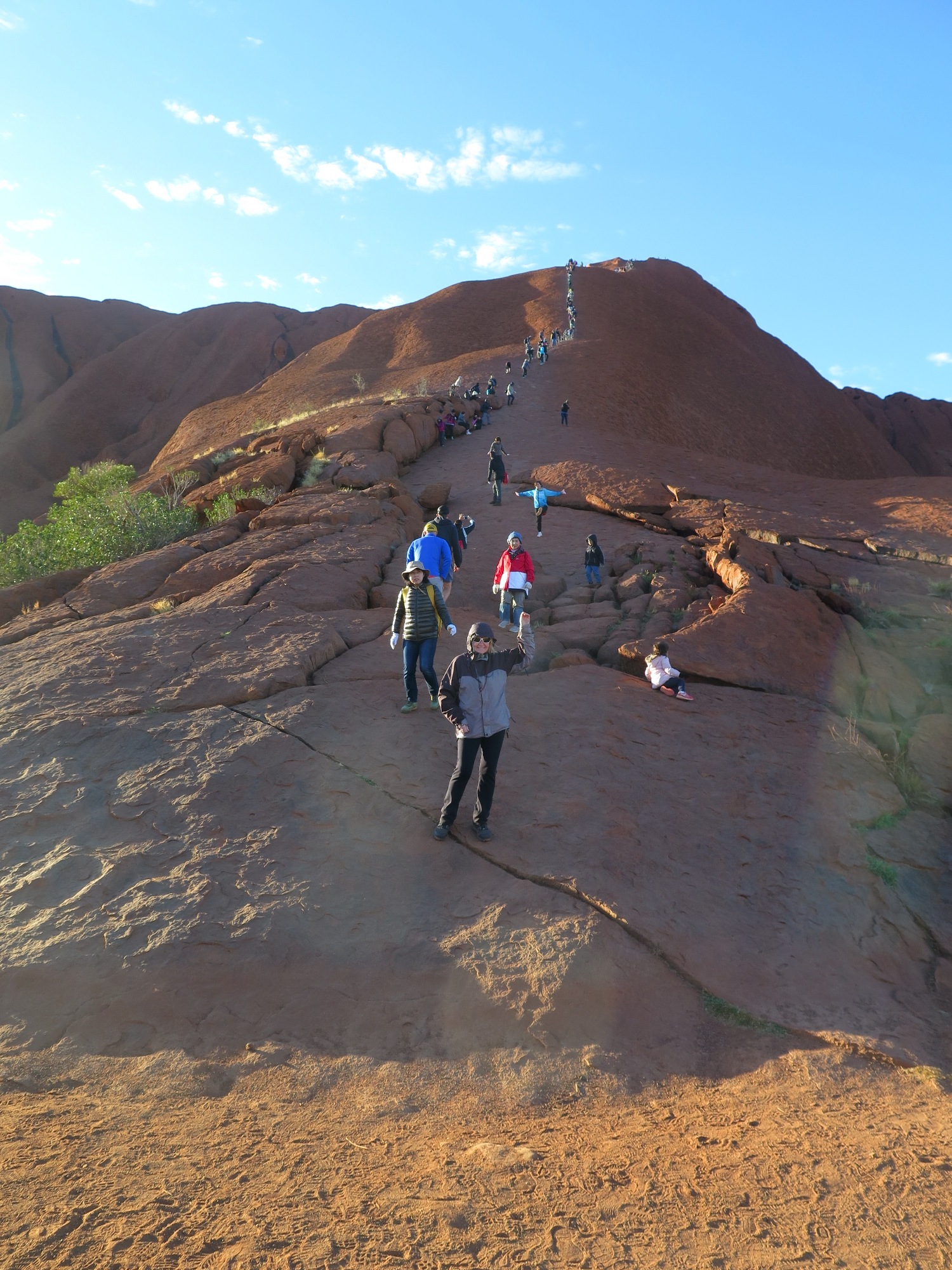 You have to climb 5-10 minutes to the bottom of the chain. 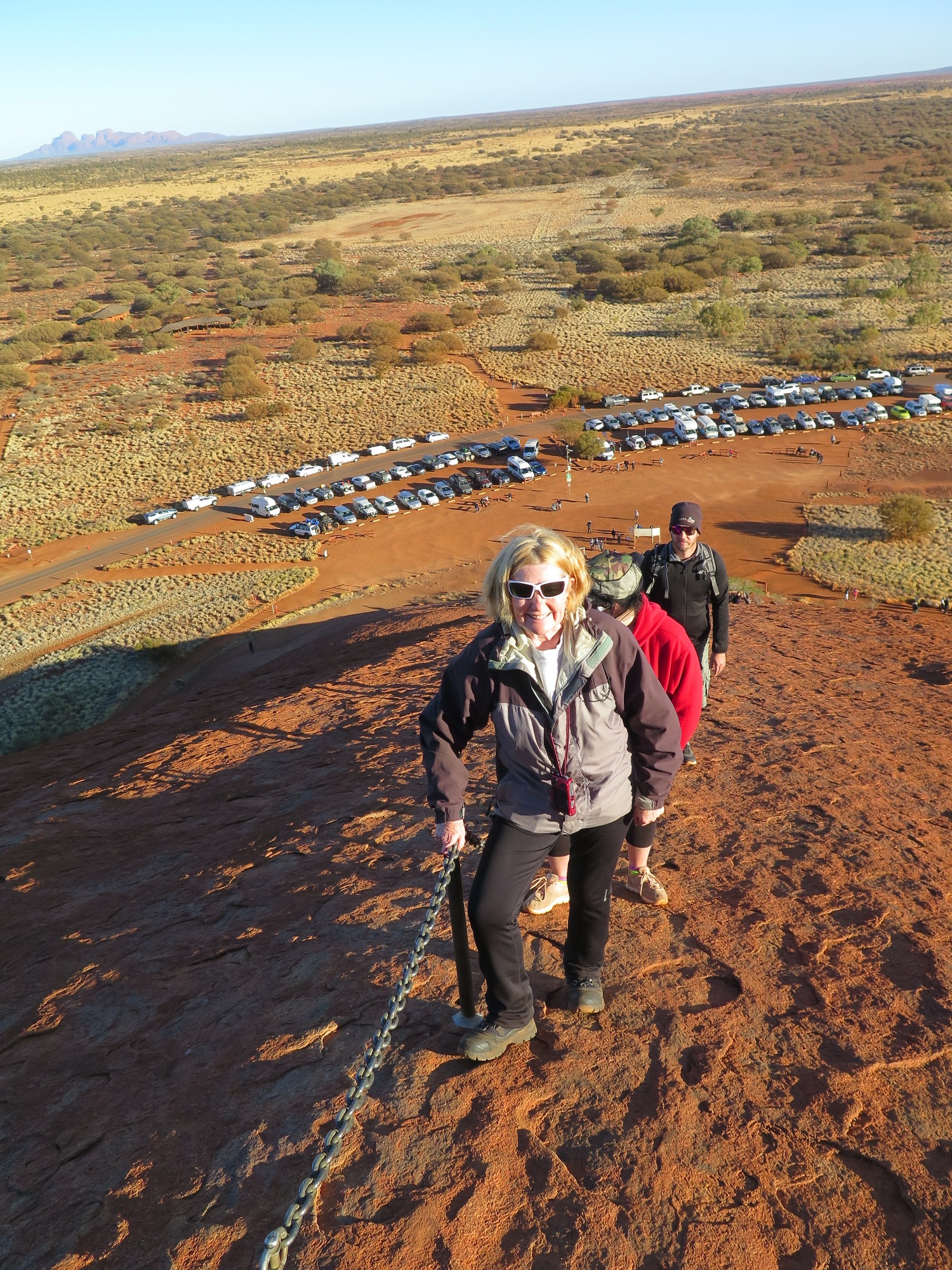 I'm on the chain here. 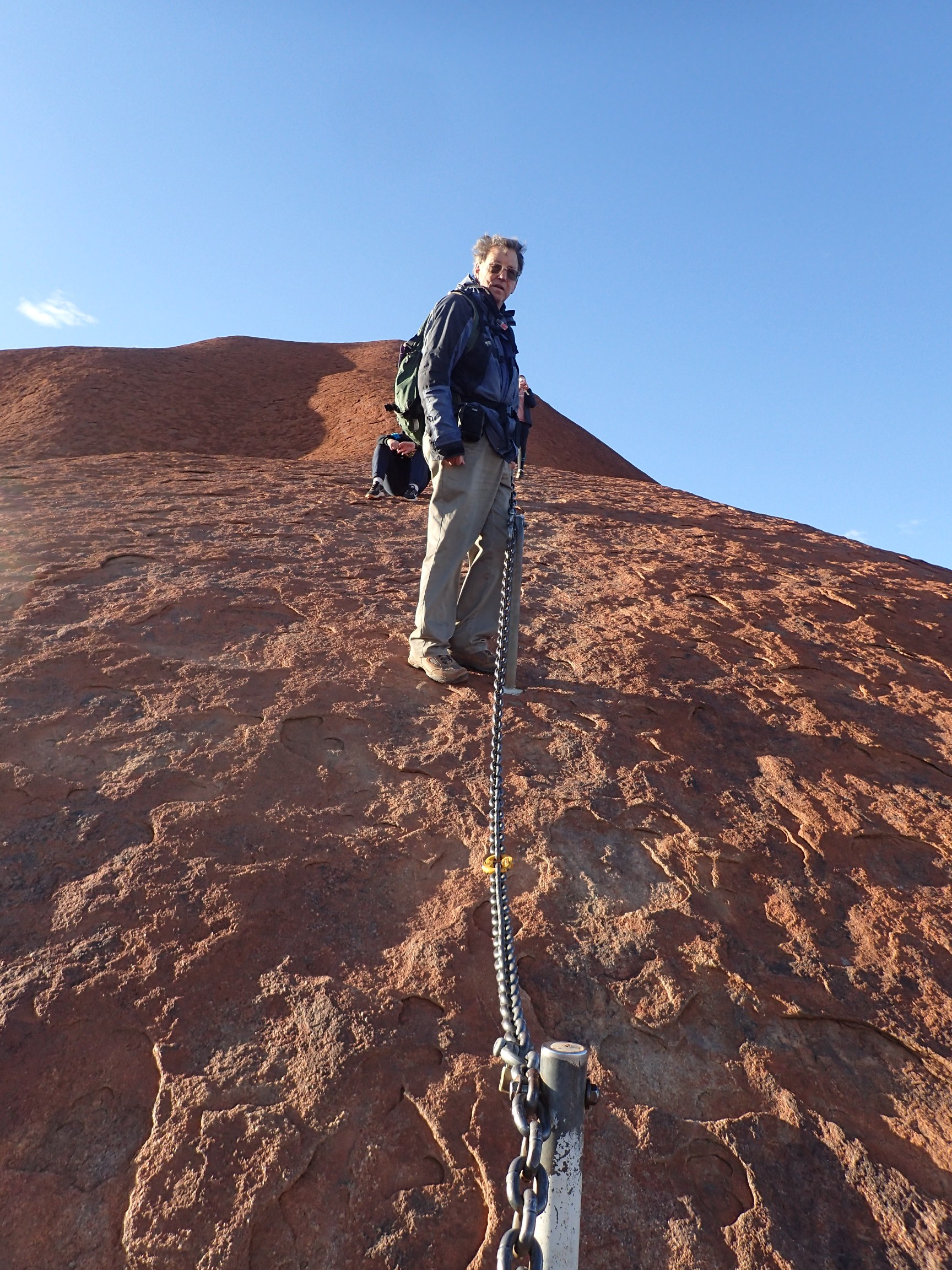 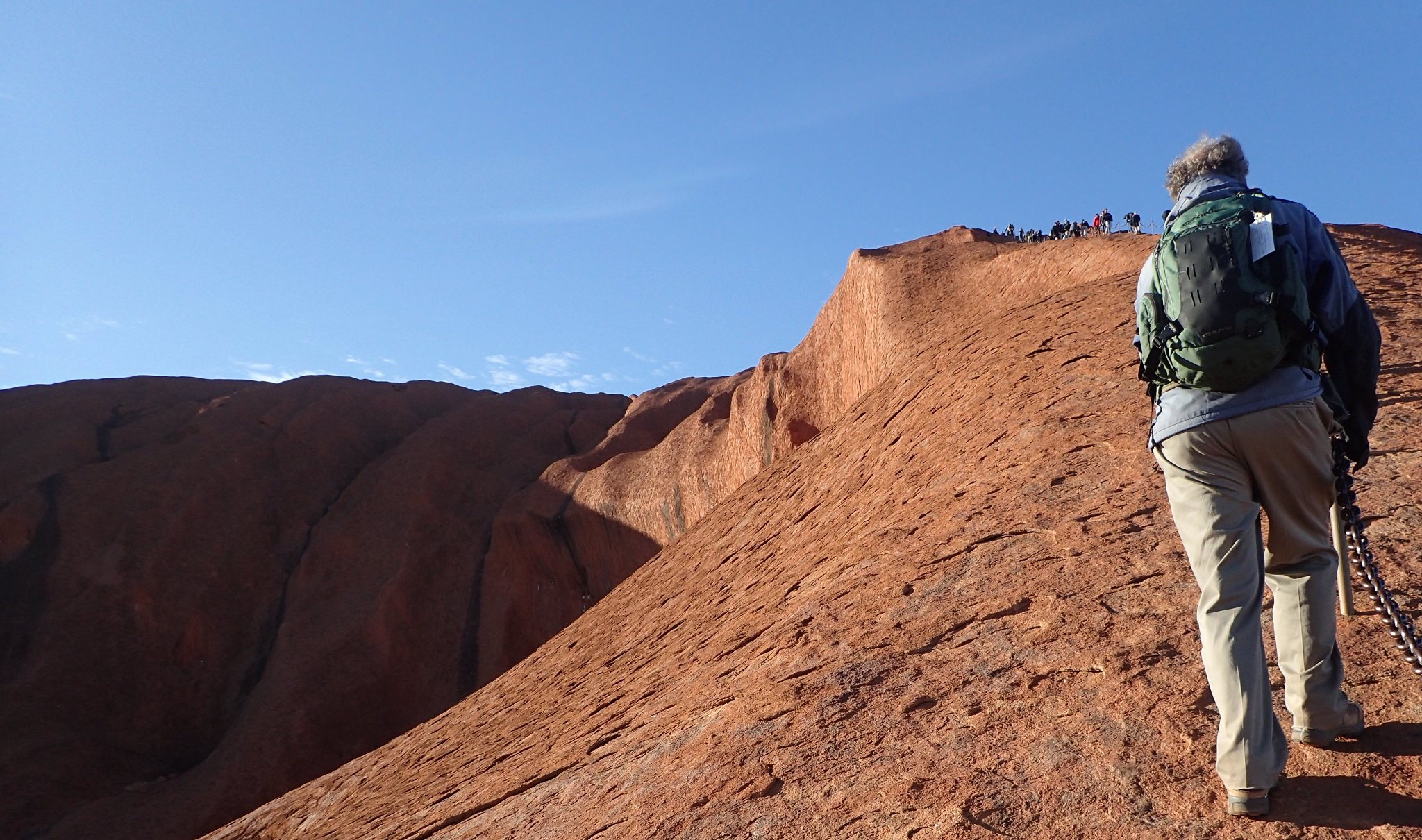 The chain is heavy so if you're above a certain height you have to lean over to grab it. On solid rock the instinct is to be conservative and always hold on, but my back was fatigued at the top so I needed to stretch before continuing. 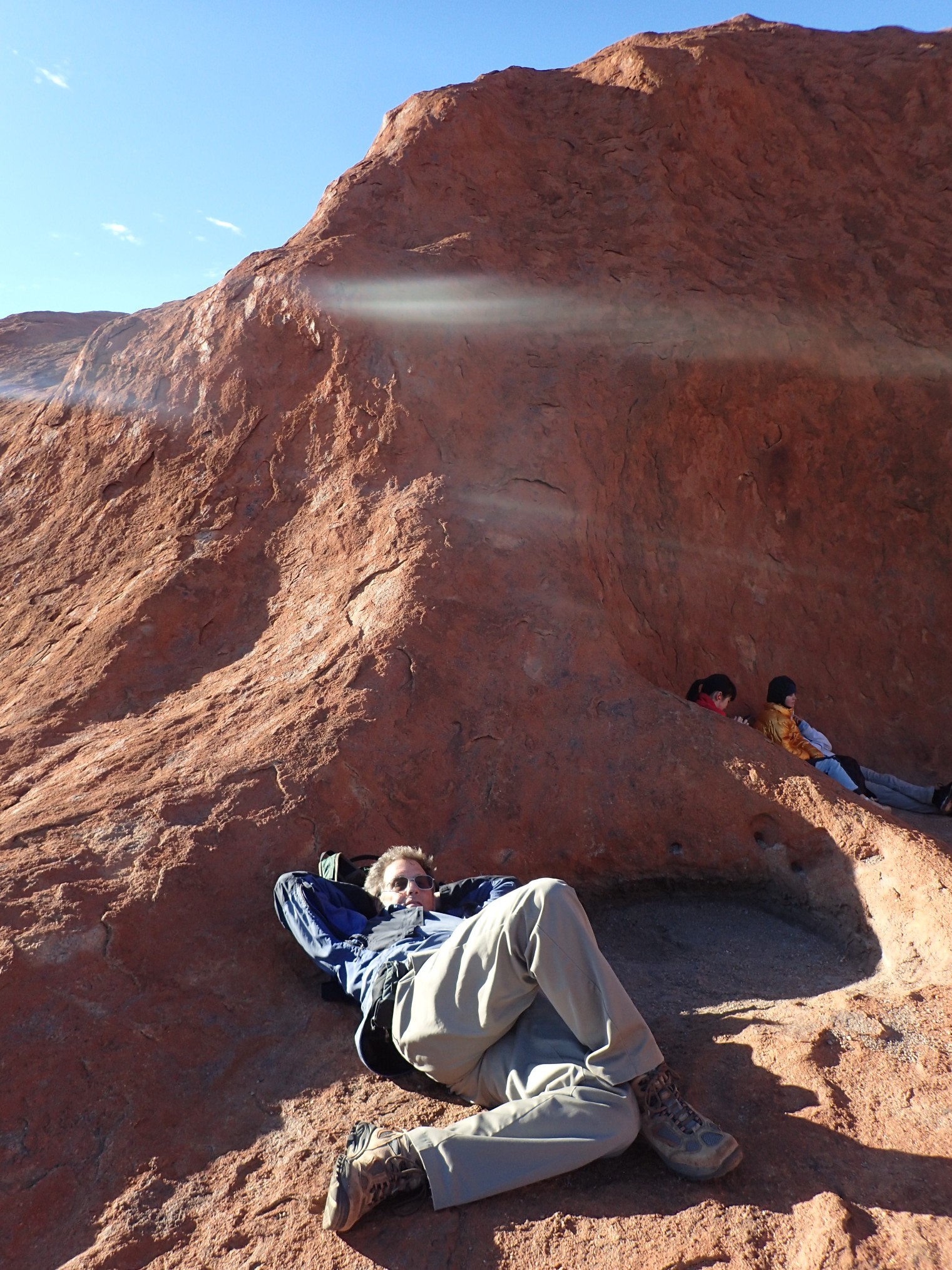 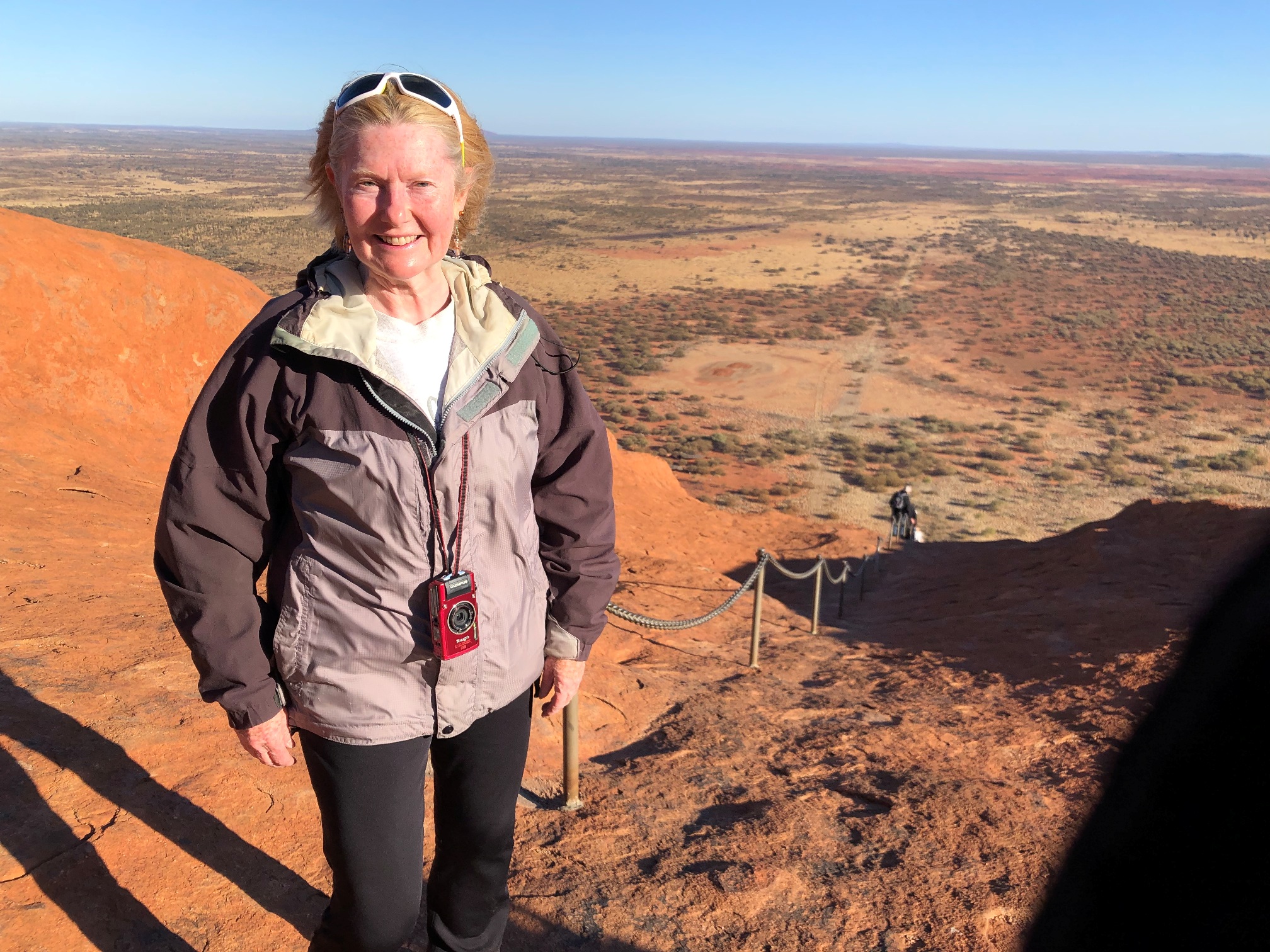 The next part of the climb is mostly a moderate and consistent pitch. 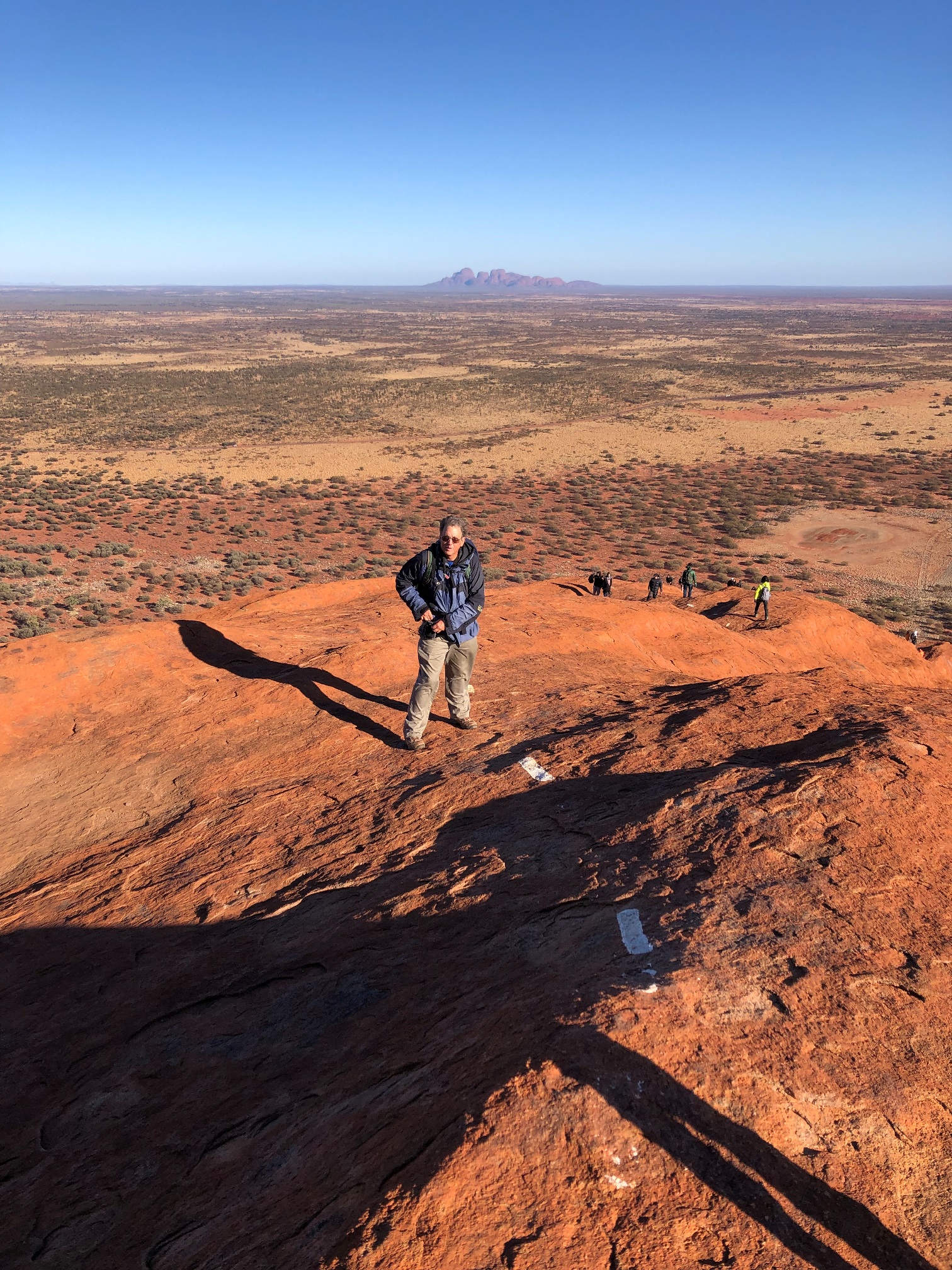 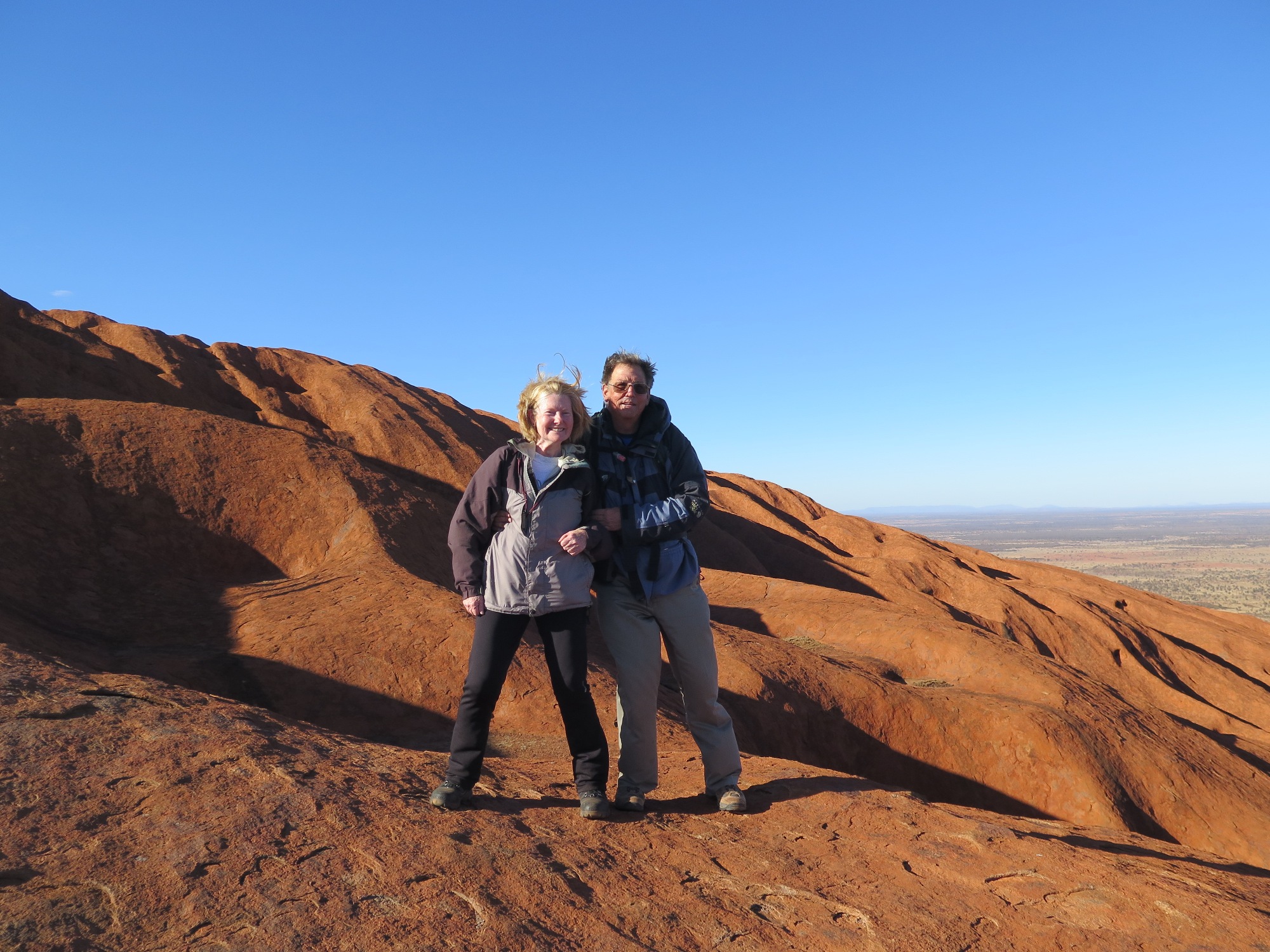 The top of Uluru appears flat from a distance but in reality it is not. 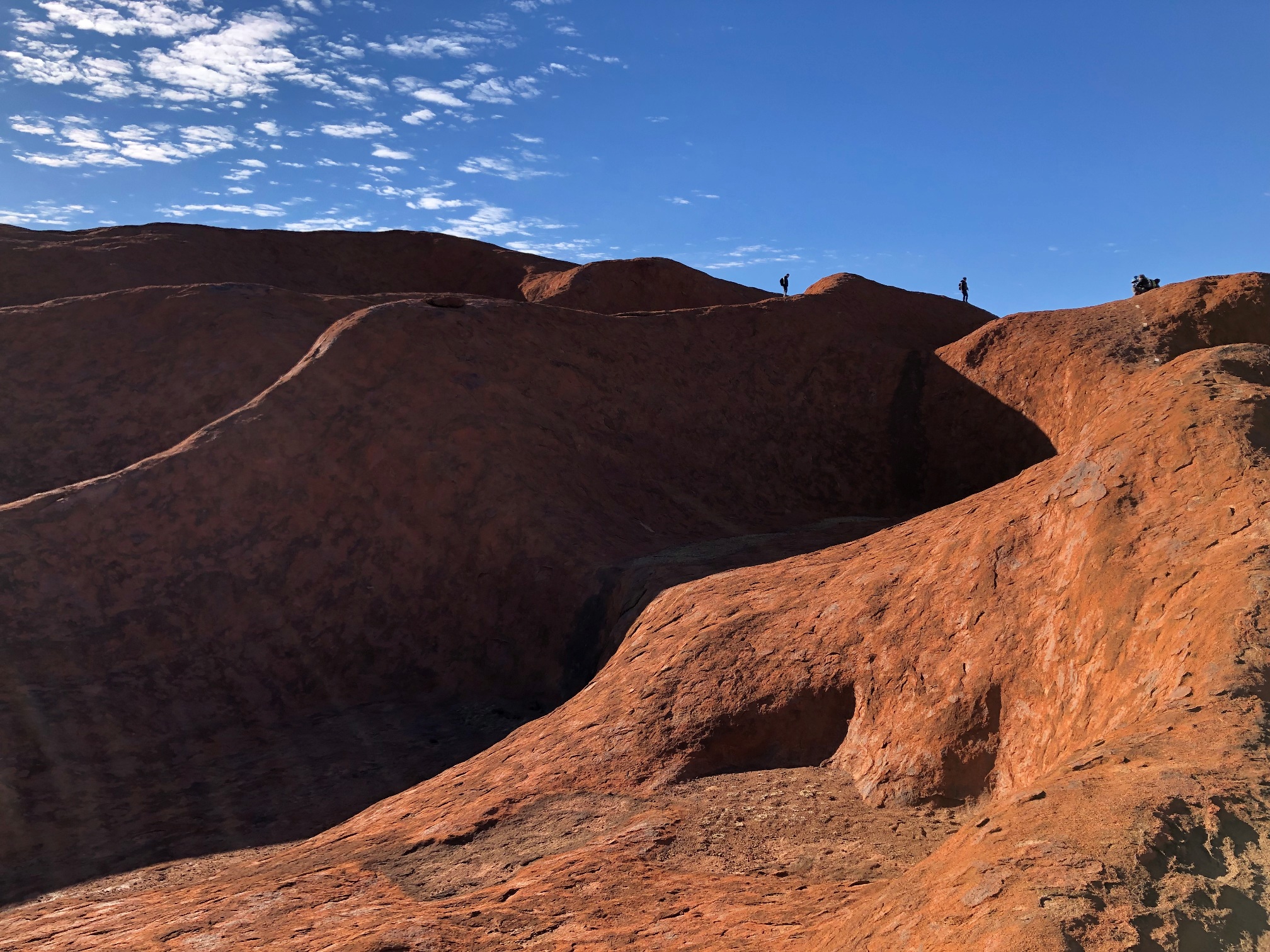 Thus there are sometimes steep up and down sections, the usually safest paths marked by white dotted lines. 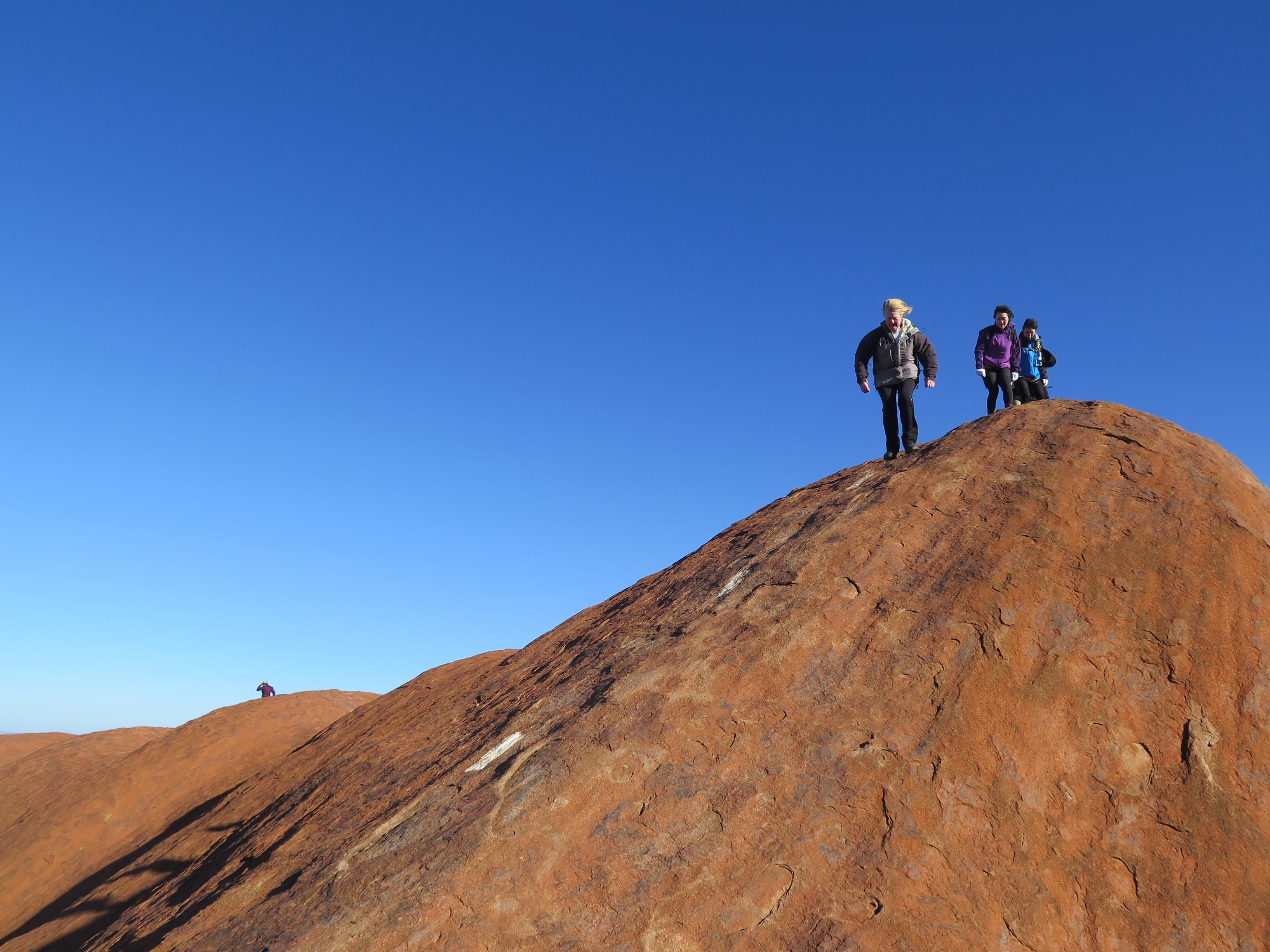 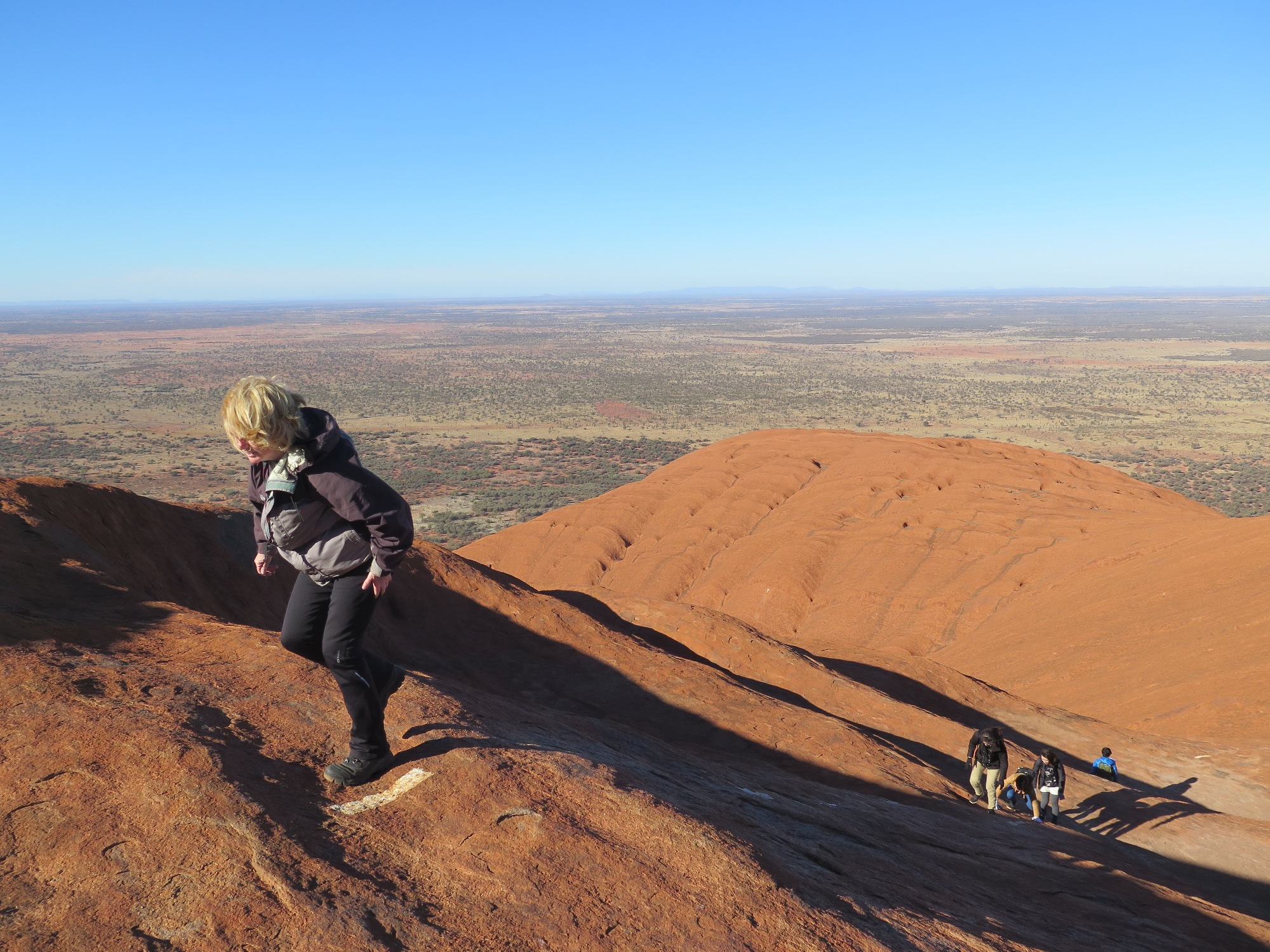 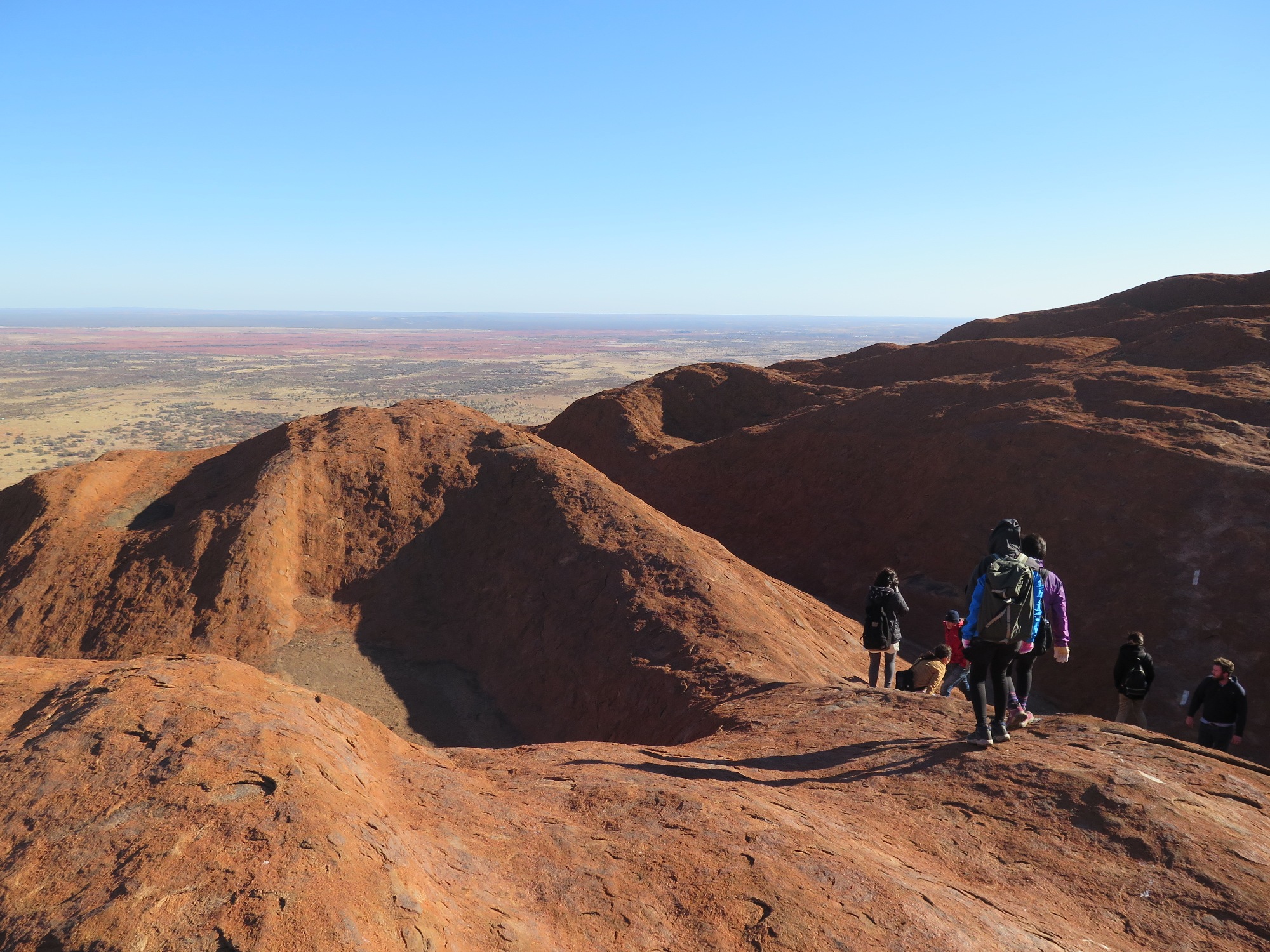 On top there was steady breeze from the south and it funneled particularly strong here. 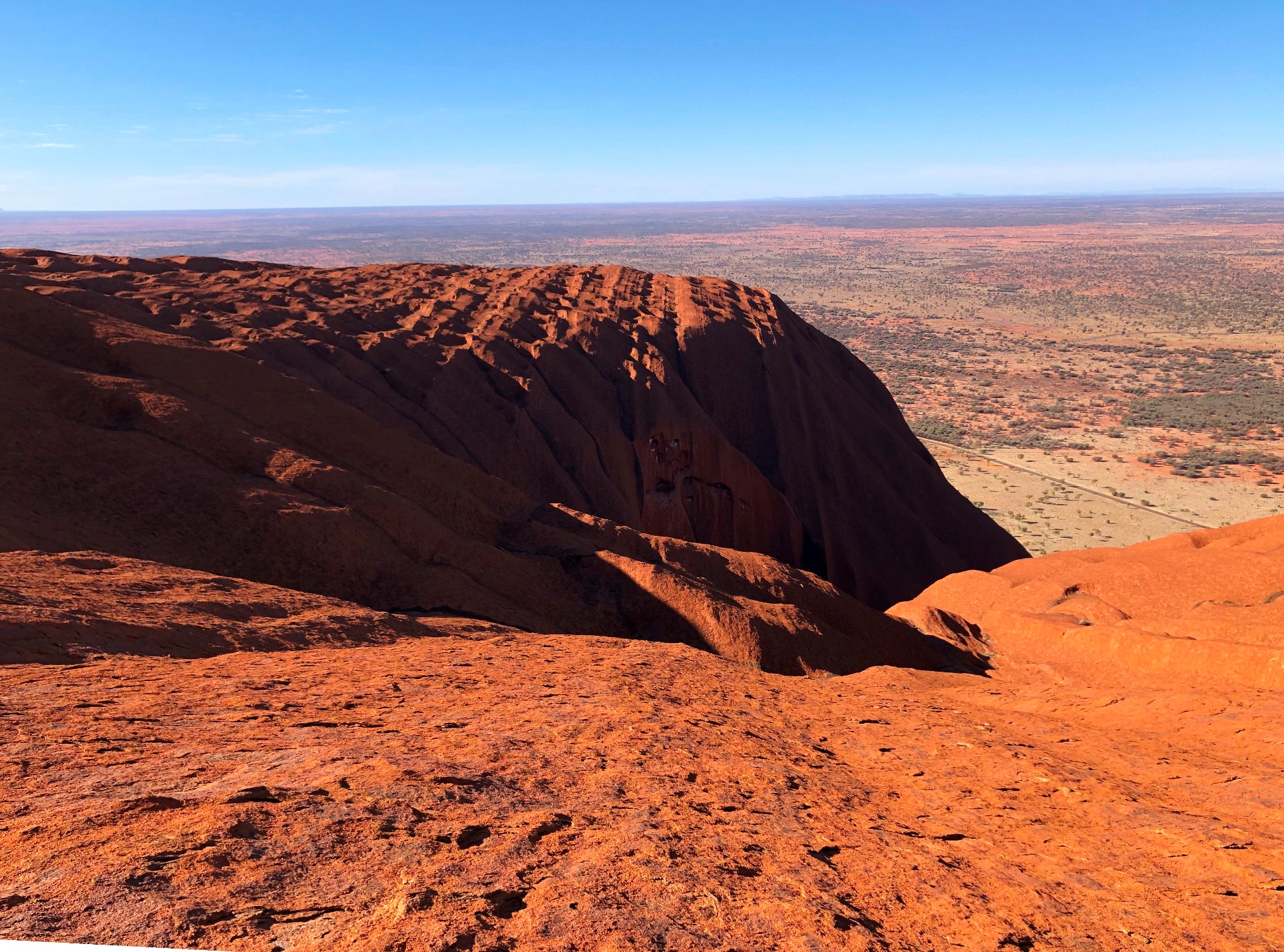 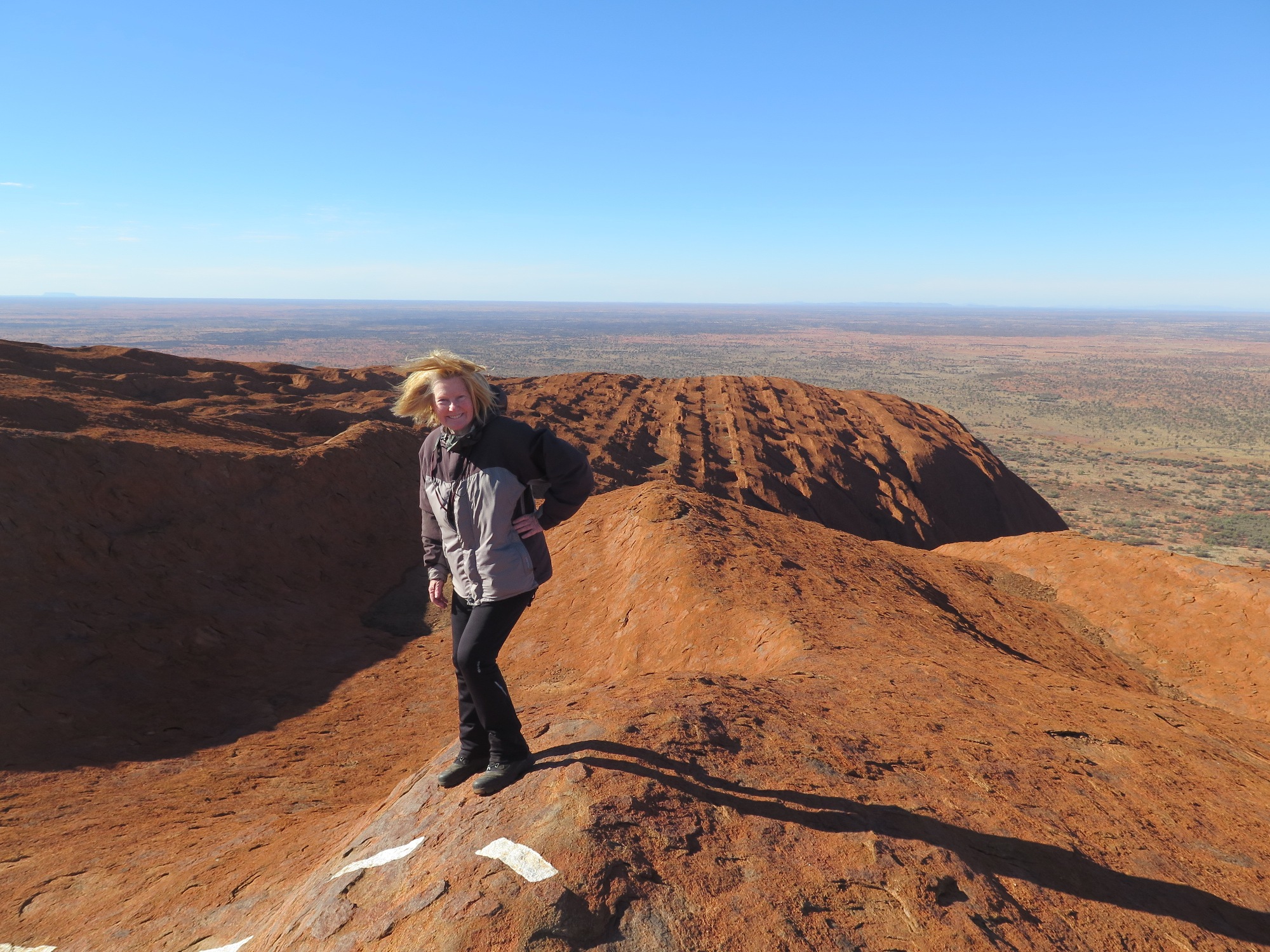 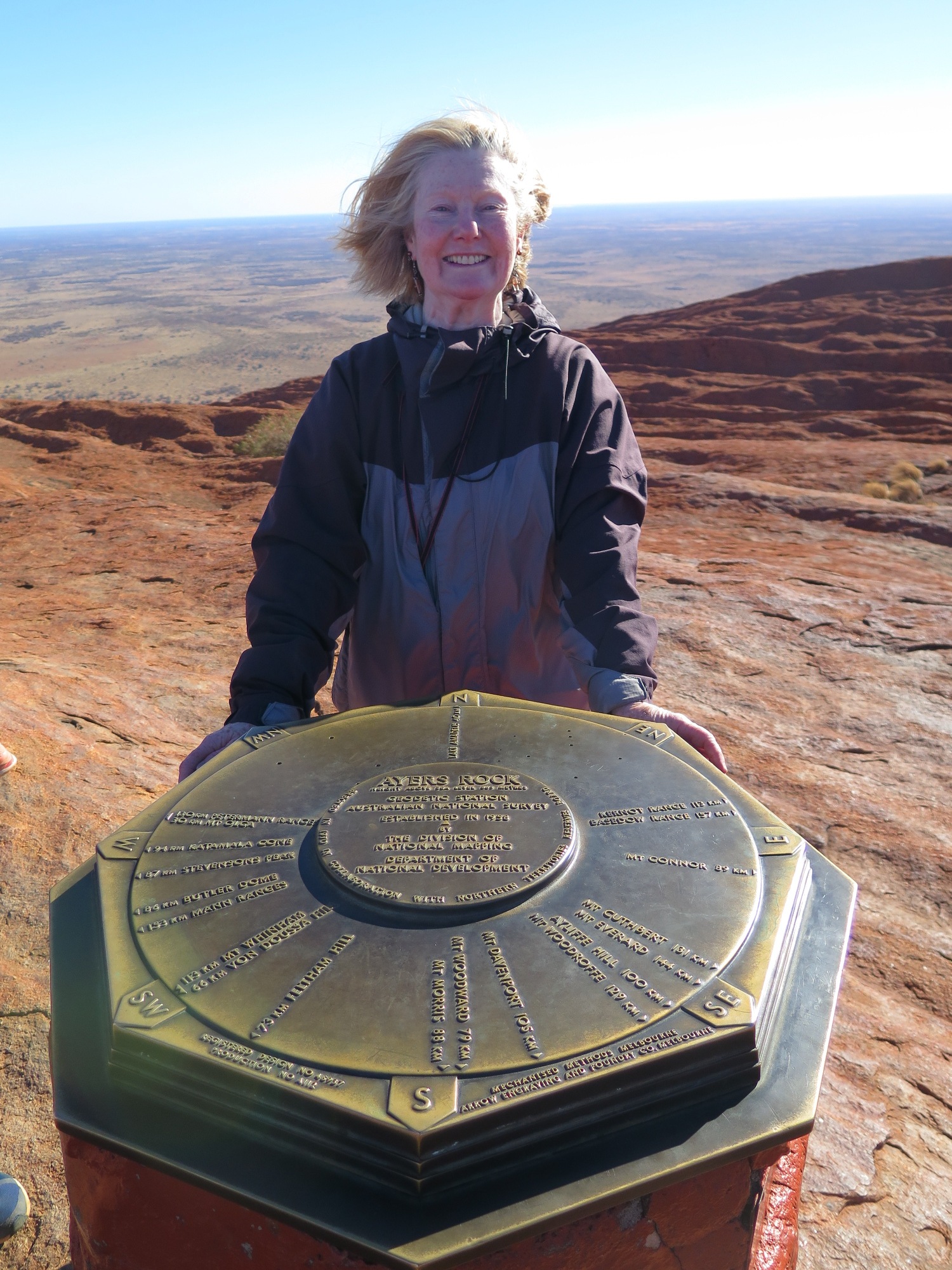 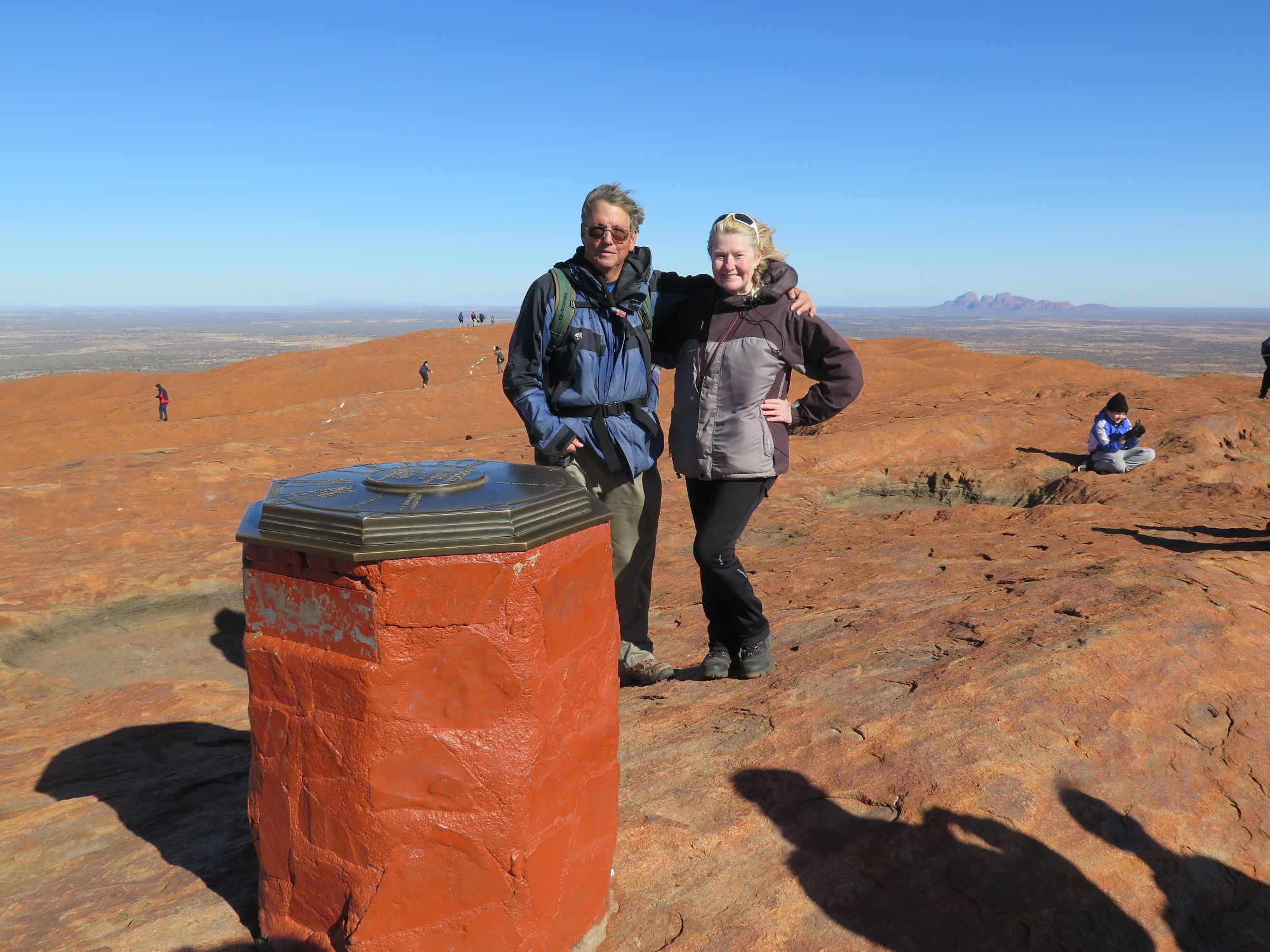 I explored farther east toward the line of stacked rocks. 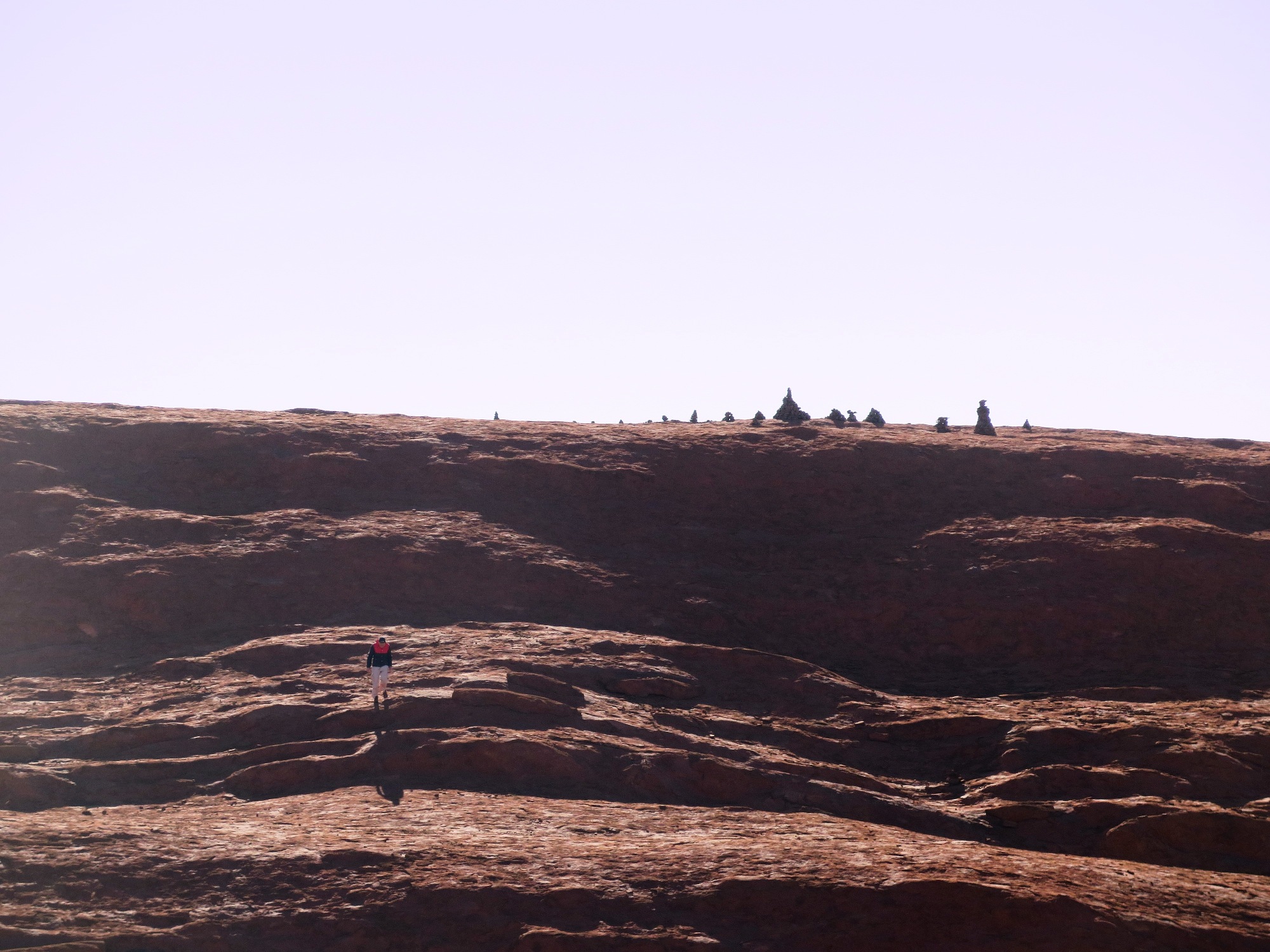 Crossing the ridges and gullies with no path markings is harder than it looks. I met this guy and showed him the easiest crossing of a gully he had presumably crossed in the other direction half an hour earlier. So I decided to turn around after 15 minutes. 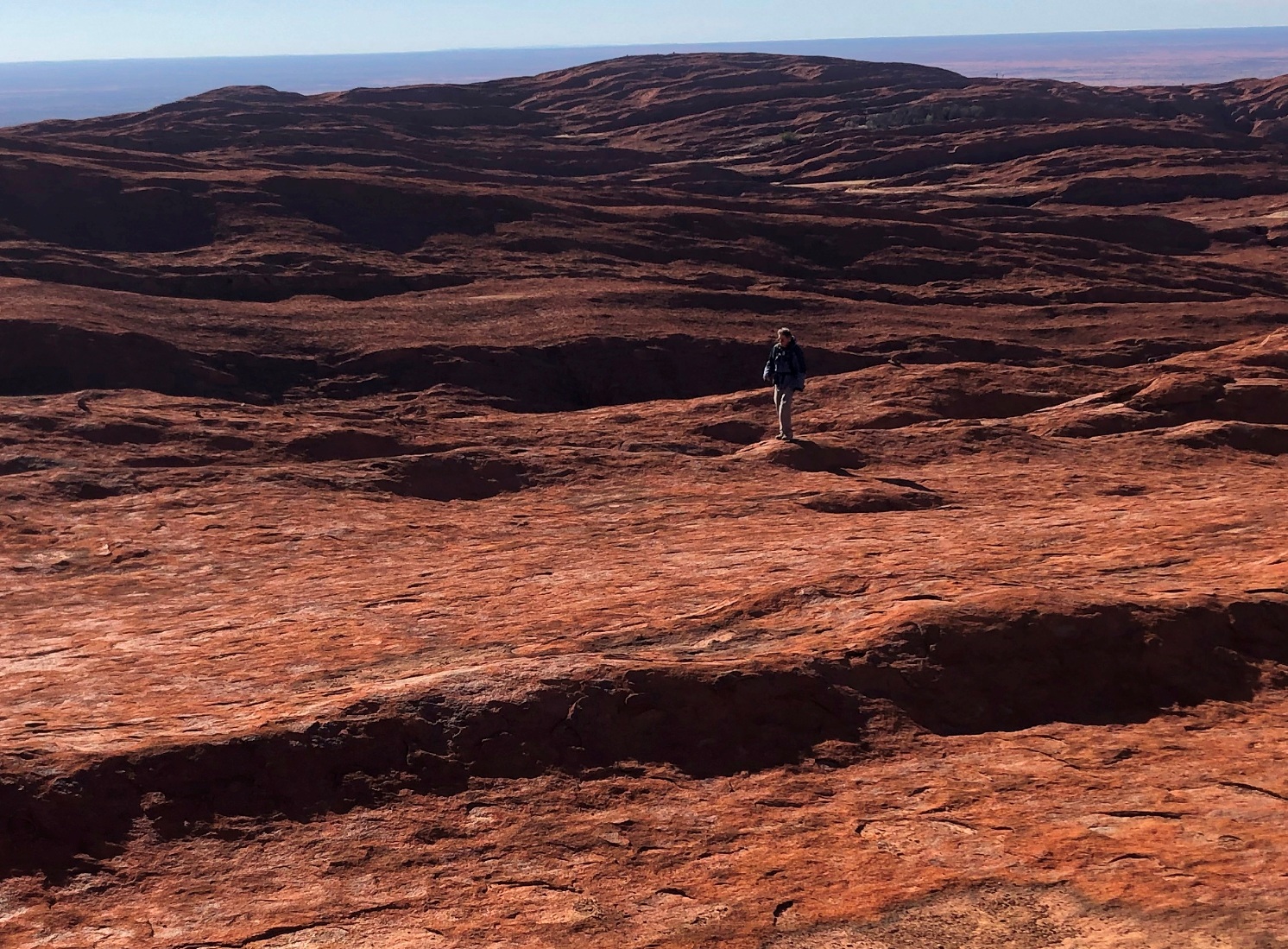 Liz stayed at the marker. 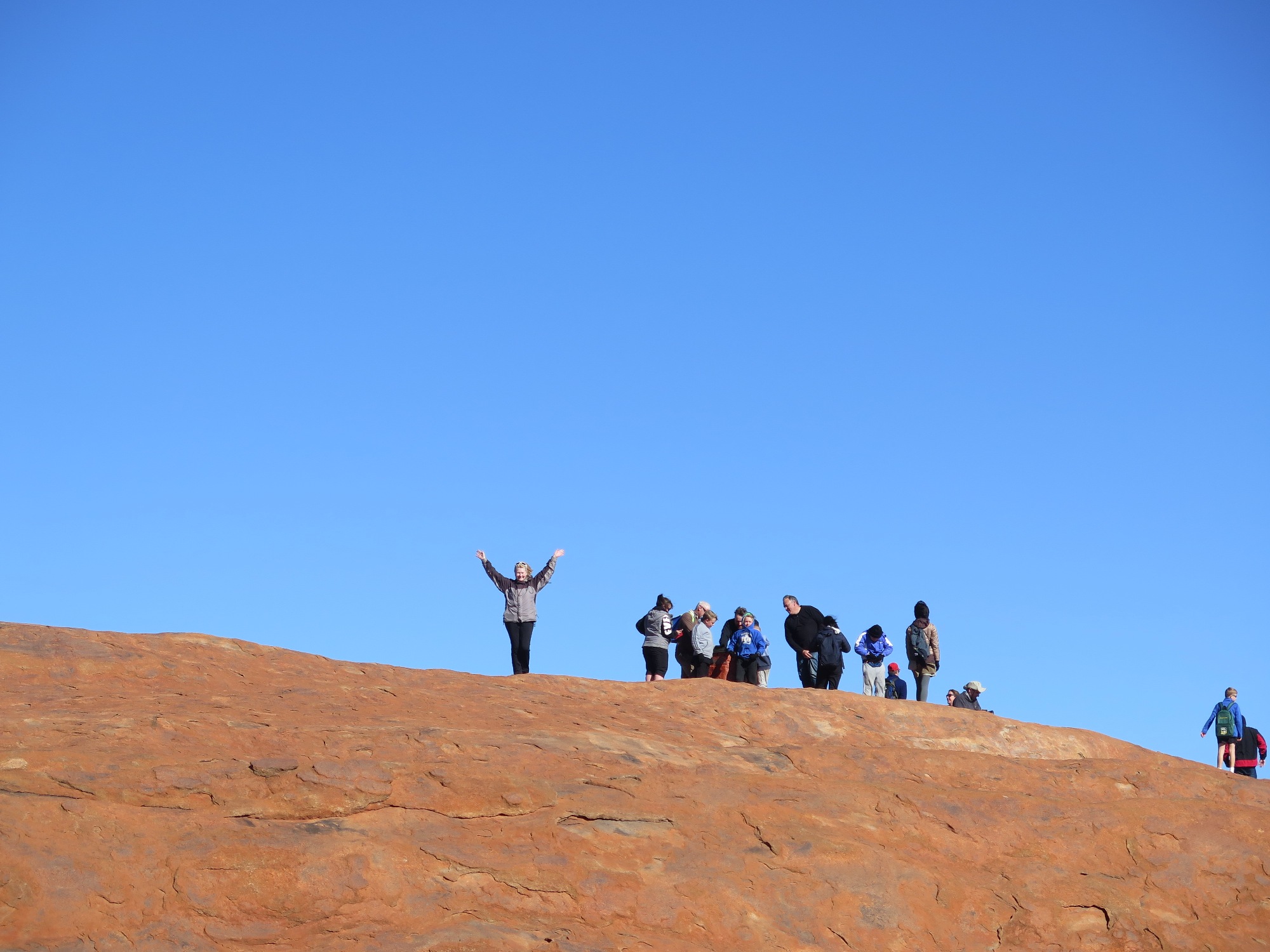 Zoom view of Kata Tjuda from top of Uluru: 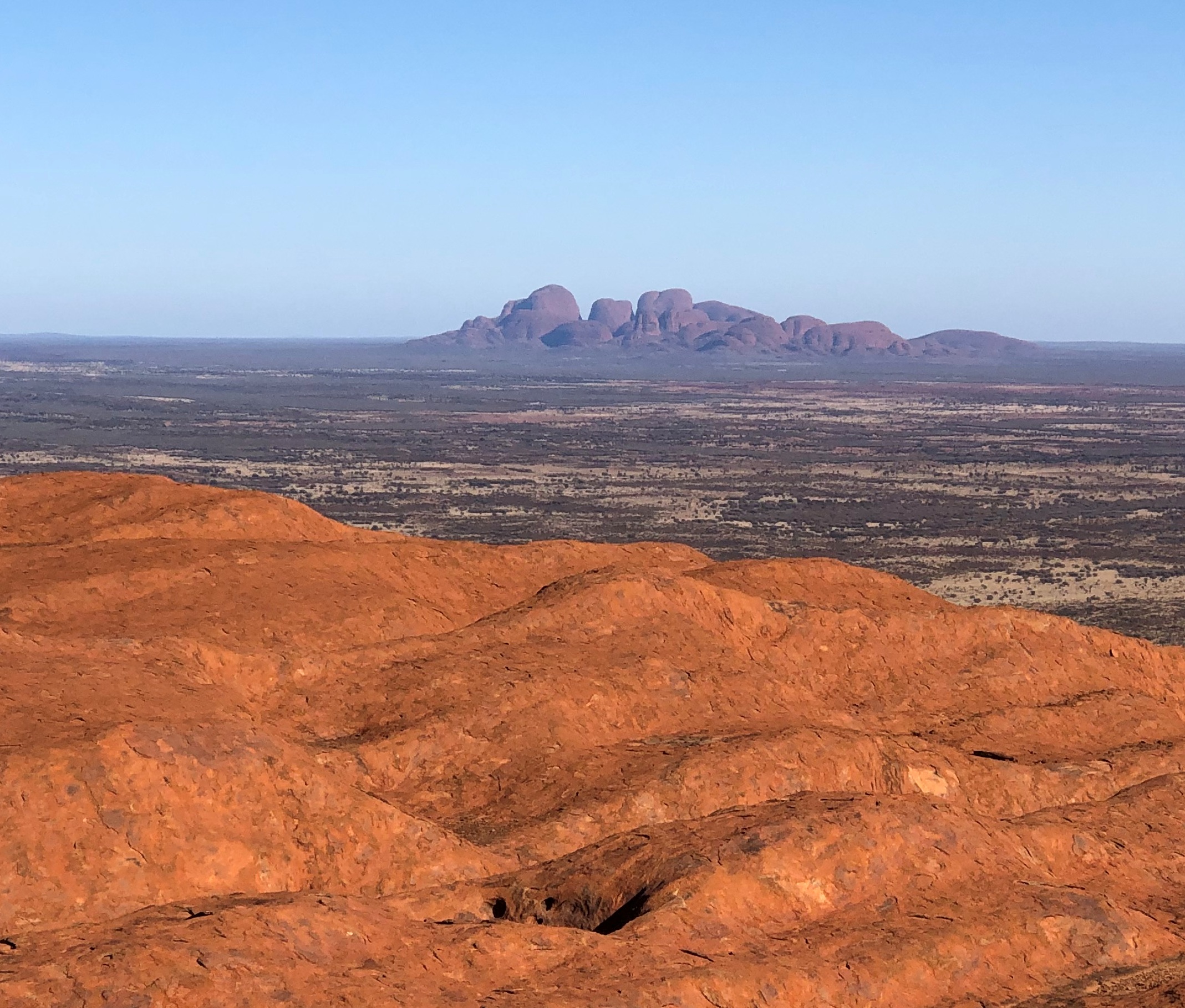 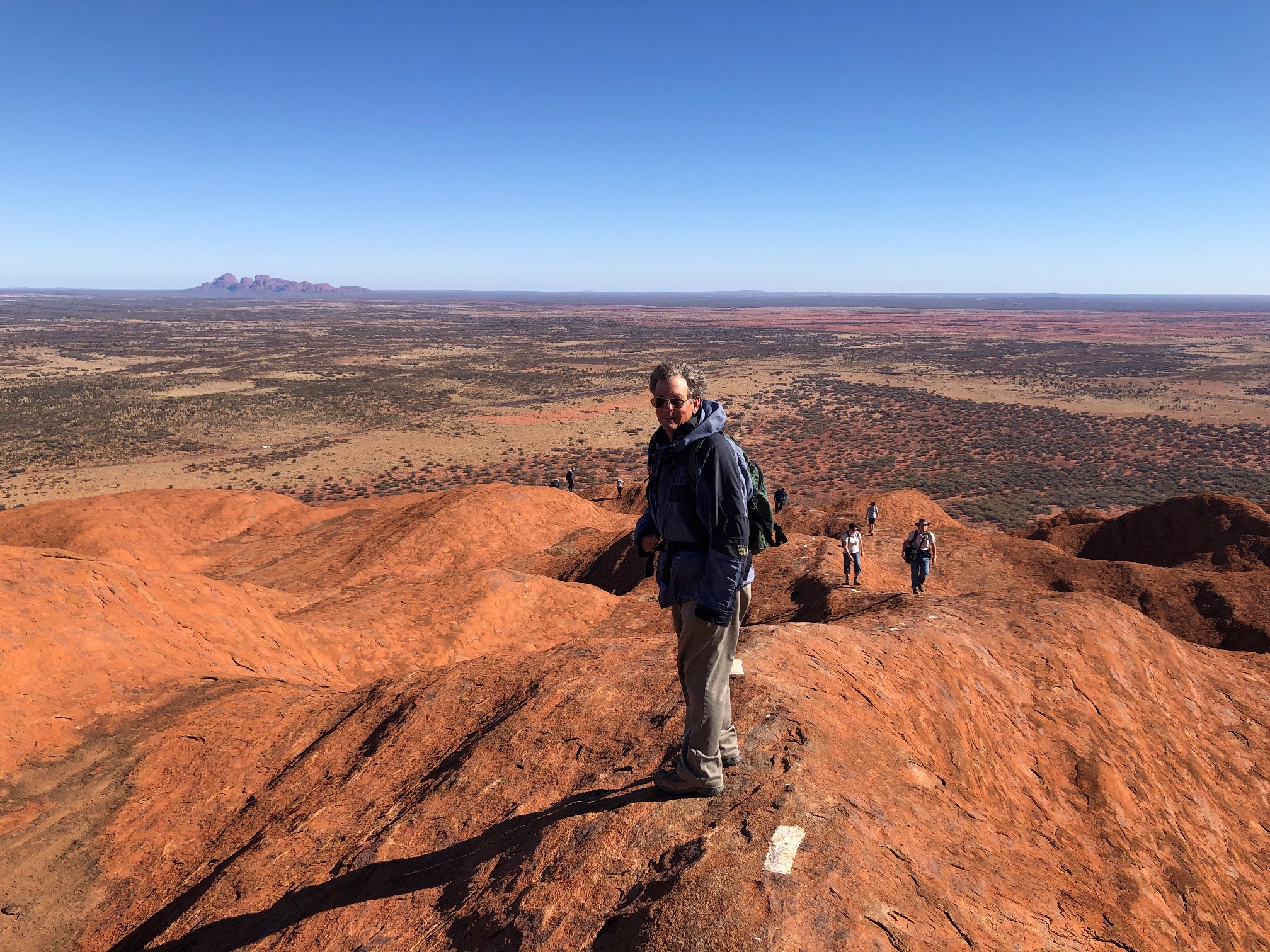 Here we have a view across Kantju Gorge. 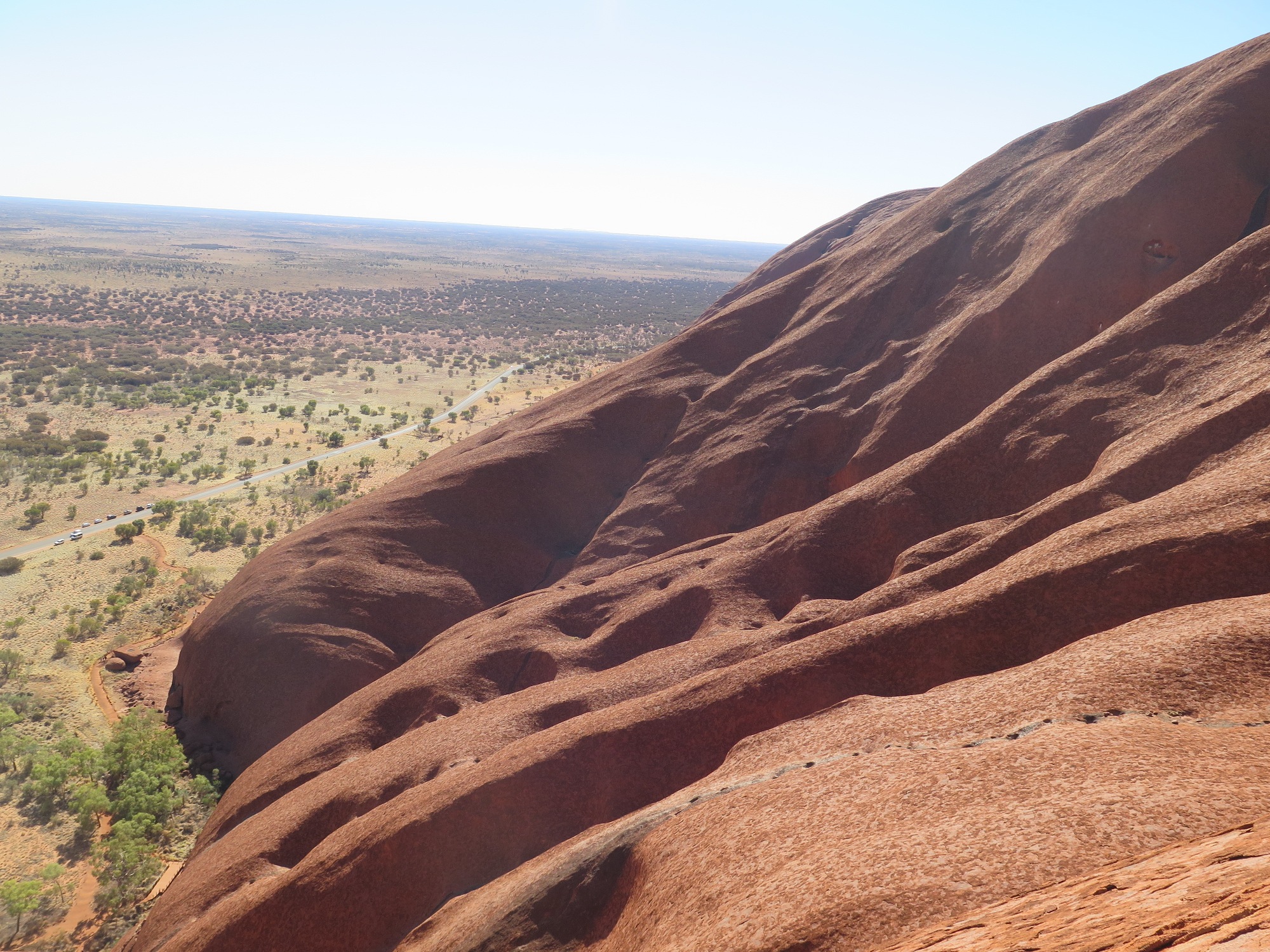 Later we will walk to the waterhole at its base.

I'm descending the chain, only holding it on the steepest parts. 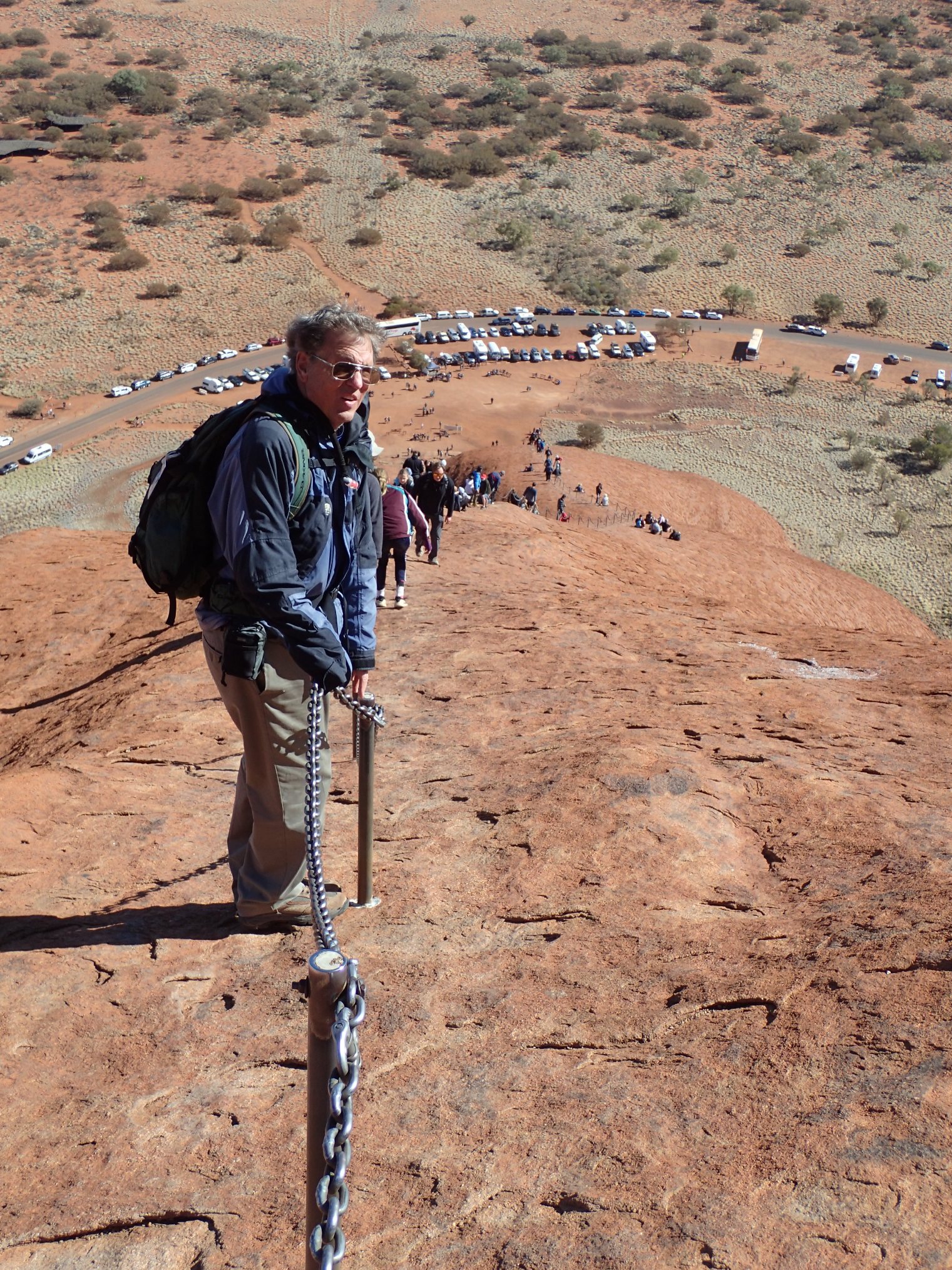 Liz on the final rock below the chain: 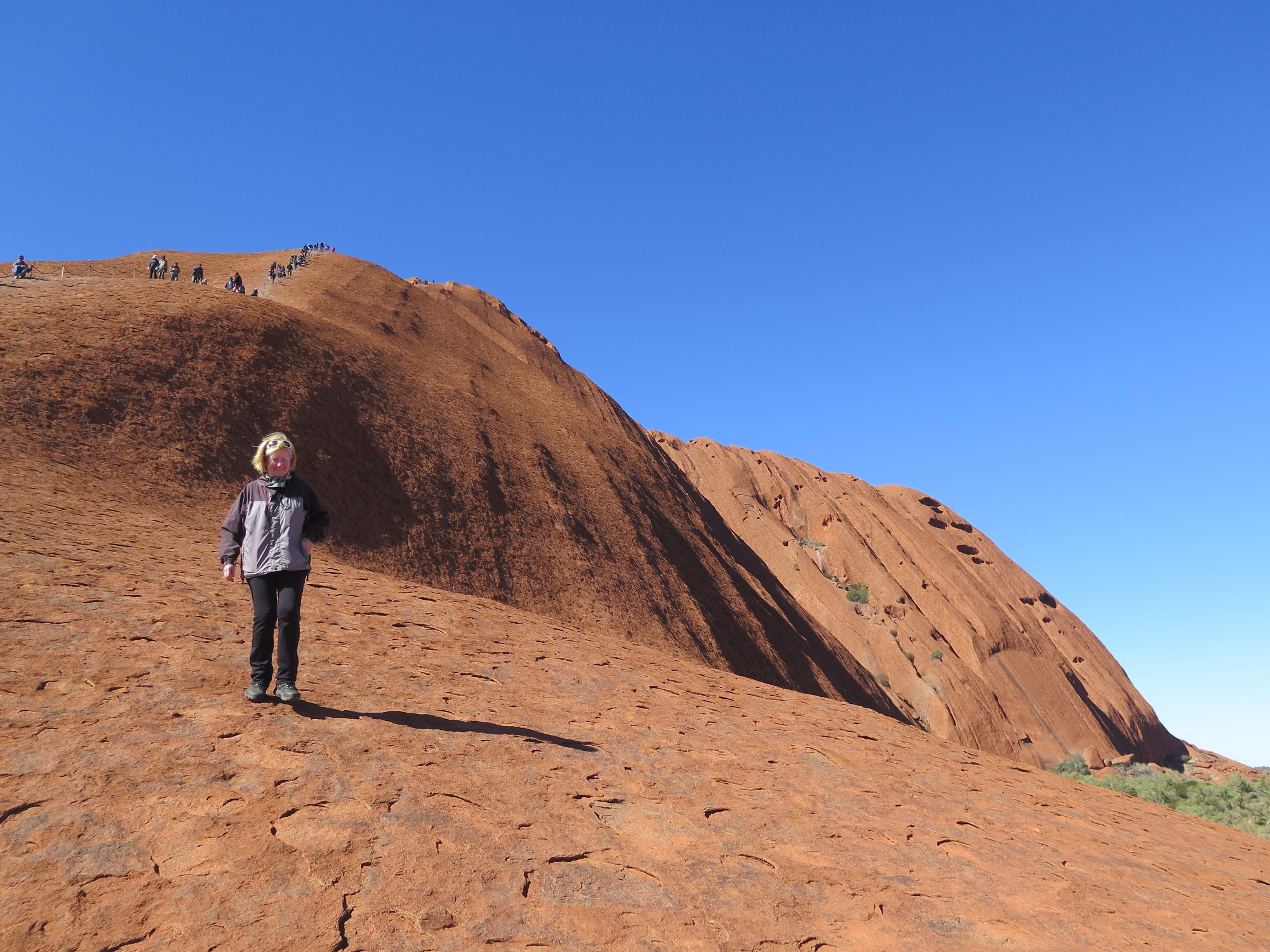 We got down just before noon, so had time for walks and the cultural center near the base in the afternoon. There will be another TR for the ground based activities which will be the only ones available after October 26.

Kata Tjuda looks at least as interesting as Uluru among the desert landscape. Wonder why the huge international preference for one over the other as a sight worthy of trekking to at all.

Staff member
We spent about 4 hours July 17 doing the 7.4km Valley of the Winds hike at Kata Tjuda.

What makes Uluru more popular?
1) Uluru is less than 10km from the Ayers Rock Resort lodging while Kata Tjuda is 50km.
2) Historically Uluru could be climbed, though that's coming to an end Oct. 26.
3) For those who want less effort, walks at the base of Uluru are completely flat.
3) Uluru has the two waterholes. There may be natural water in Kata Tjuda but visitors are restricted to two trails where none is visible, at least during dry season
4) Uluru has two interpretive trails with a daily free guided tour on one of them. Kata Tjuda is even more sacred to the Anangu people. So much so that unlike Uluru the Kata Tjuda legends/mythology are secret to outsiders. There are no signs/explanations of any kind in Kata Tjuda other than direction arrows.

I agree from a distance Kata Tjuda looks more interesting than Uluru, but up close I thought the opposite.