I've been working on this list since 2006. The first one always takes the most time:

Need to get stuff done, I'm going skiing for a few days.

To borrow from another motto... "Ski It While You Can"

Update, April 17, 2:00pm: Wash out Easter Weekend. Ski areas are looking at all the rain in the forecast and wondering about the weekend plans. Regardless of the huge amount of snow, some decided that they will not open for one last weekend at Easter.


Other decided to reopen today Wednesday on the last sunny spring day prior to wet Easter weekend. Miller moved it closing date to today, while Mad and Smokey haven't made a call on this weekend.
Miller
Mad River Glen
Smokey
Click to expand...

Staff member
Yes that's an ugly forecast but not an uncommon one for the Northeast in spring. The Mt. Mansfield Stake averages 5 days of rain in April.

IIRC one of the great features of the big 2001 season in the Northeast was that April was relatively dry. Therefore the spring corn skiing was more like we usually get in the West. And the natural snowpack must have been deep after the big March.

SoCal's season comes to an end this weekend at Snow Summit, Snow Valley and Mt. Baldy. Our current spring weather is not so uncommon either: 80+F in LA and 60+F in the mountains.

Tony Crocker":1kinw9o0 said:
Yes that's an ugly forecast but not an uncommon one for the Northeast in spring. The Mt. Mansfield Stake averages 5 days of rain in April.
Click to expand...

There is rain, and then there is RAIN.

I don't recall having rain affect most of the East over an entire long weekend. Alerts are given with the high risk of flooding across good parts of Ontario, Quebec to Vermont (and I presume some other states).

I decided to add an extra post due to the deluge of closures and skip one weekend approach.

Okay, how bad is it?

Staff member
Patrick posted a UVM website graph of recent years at the Mansfield Stake. Here are the top years: 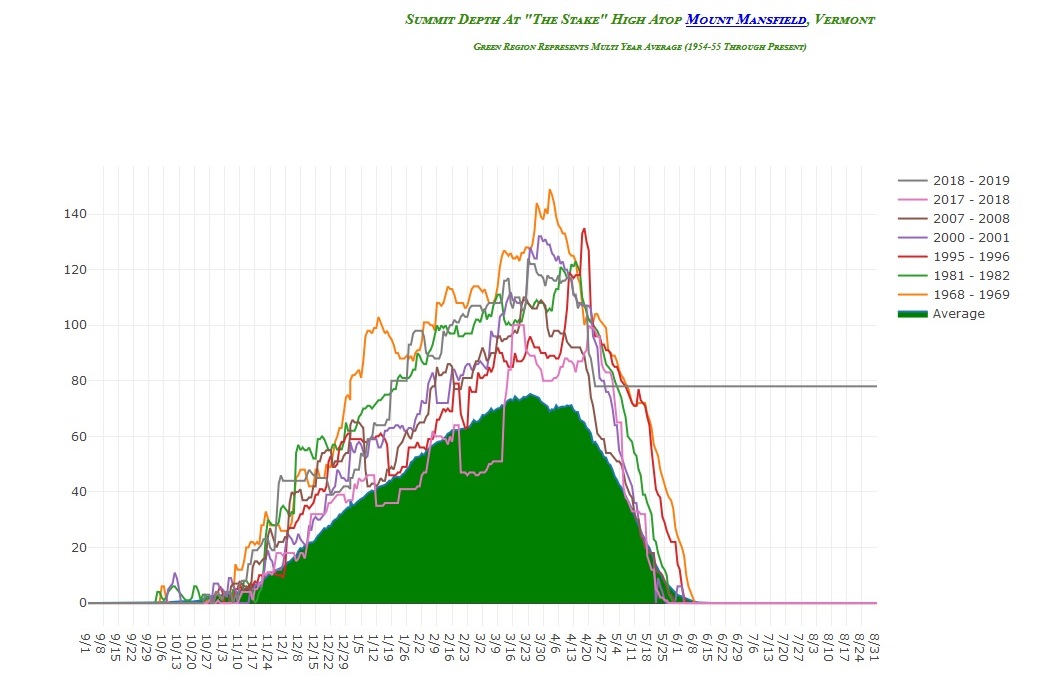 If you create that graph yourself at https://waw.w3.uvm.edu/skivt-l/?Page=.% ... l.php&dir= you can put the mouse over the graph and see the exact values ranked for any date.

Scott Braaten has been touting the Mansfield Stake snow depths for some time this season. Overall northern Vermont snowfall is in the 120% range, good but less than 1995-96 and much less than 2000-01. The big November of 2018 must carry disproportionate importance in creating and maintaining the deep snowpack as long as the rest of the season is decent.

Update: Thursday evening:
Another April weekend, another terrible forecast weekend. From my point of view, flood levels are the highest in a generation, the rivers are rising and the call is still for a few days of rain. You know there is an issue when you have to look if the highways are still open if you want to go skiing.

A few things have come into focus the last few hours, rain and impact on the snowpack.
A few ski areas which generally don’t have much issues with lack of snow late in season are calling it a season due to the unfavourable forecast again this weekend are throwing in the towel like Massif du Sud, Mont Comi and Mont Sutton. Mont Orford decided not to try to reopen after not opening Easter weekend.
Others are warning that they might not open on certains days as planed or at all this weekend due to the same forecast: Ste-Anne and Vallée Bleue.

Other like Jay, Sugarloaf, without mentioning Sutton, have dialled back hopes to spinning beyond May 5. It looks like again this season, that the last spinning lifts will be at MSS and Kmart.

Still 6 spinning at least one day in May. The week of daily operations, only Loaf and Kmart. Only MSS and K are looking to go beyond the first weekend in May.

The torrential rain during the Easter Long weekend had a huge impact on a human activities; some regions are seeing significant amount of flooding with the quantities of rain, huge snowpack and above normal temperatures.

The impact on skiing and skiing operations are also important, but it’s just a sport, not people lives. In one week, the snow depth at the top of Mount Mansfield has dropped over 2 feet. Although the snowpack went from 108″ to 83″, the amount of snow left is still well above the average for April 23rd and is similar to the amounts found at this time in 2007, 2009 and 2011 (81″-84″). It’s only trailing the 2017-18 season (99″) which got hit by a late season storms and found itself almost deeper as it had been all that season.
W

wah that good keep it up brothers

One more weekend of ski spring ahead; one more blog post.

good result keep it up

MSS changed their announced closing date from May 20 to TBD. Confirming next weekend May 26-27 and tentatively June 1-2.

Last post of the season for spinning Eastern lifts.

MSS and K open this weekend for one last time this season.