Staff member
We arrived at Killington at 11AM to overcast and 16F. Killington has RFID and our Ikon passes are direct to lift. We rode the K-1 gondola to the top, where it was 11F. Upper Great Northern leading towards North Ridge had a blast of wind in the face, convincing me to wear goggles the rest of the day. Fortunately this was the only part of the mountain which had wind while skiing.

After two North Ridge runs we met Rob Schrader. Liz met him via the Diamond Dogs NYC ski club, but Rob now lives in western MA and also has a condo at Killington’s Bear Mt. He was a PSIA instructor there but now instructs closer to home. Rob was in Utah in March 2017, when we showed him around Alta and Snowbird on Monday and Tuesday of Iron Blosam week.

We skied East Fall down to the gondola base. Returning to the top all of the Canyon black runs like Cascade and Downdraft were roped off after the rain though coverage is excellent. So we continued on Great Northern and stopped here during a brief sunny break. Rob and Liz: 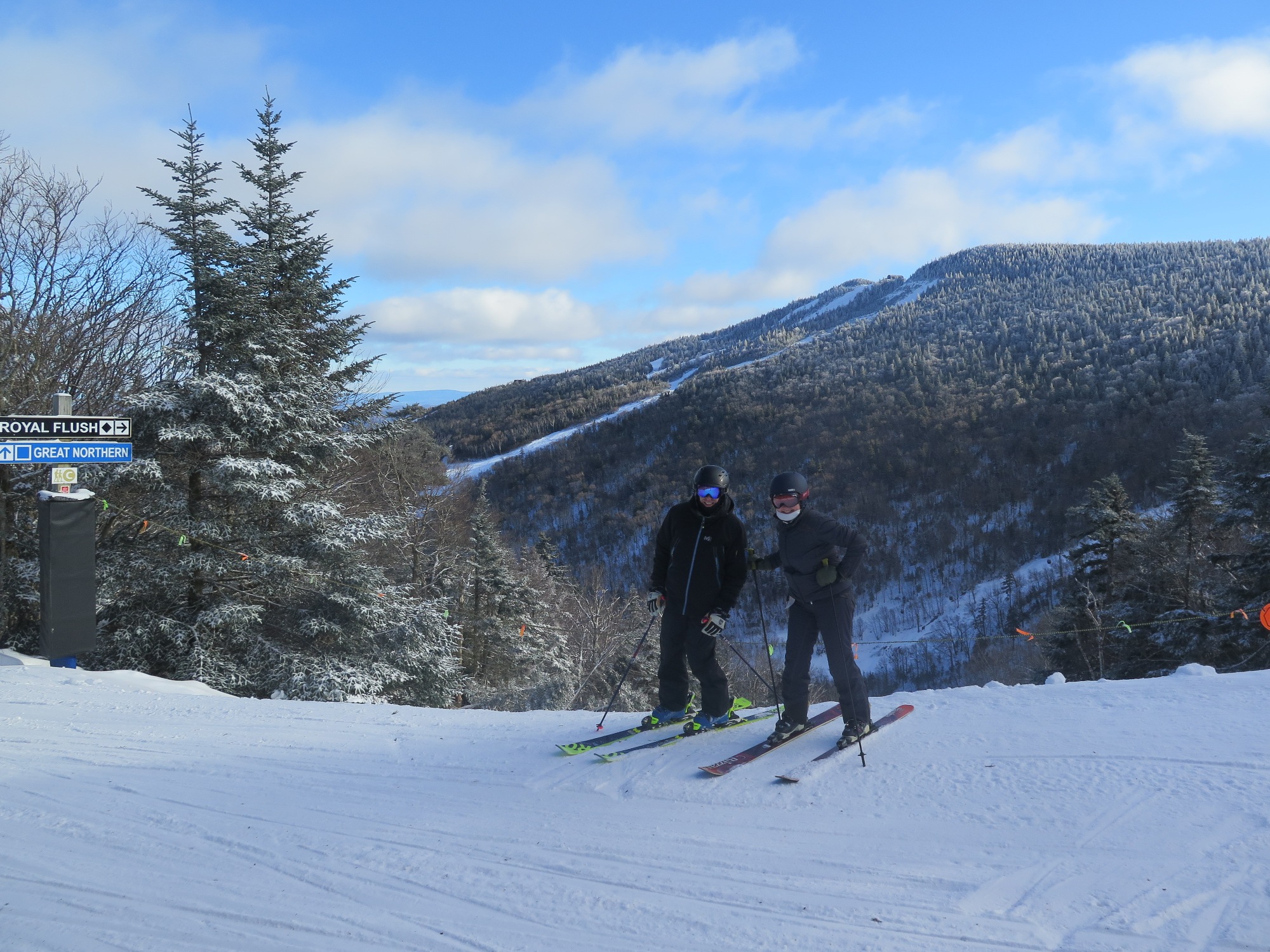 Royal Flush is a natural snow runs that Liz likes, and when she saw it was open a week ago, she knew what a great November this was for the Northeast. A closer view over the closure rope shows the good coverage with a thin layer of new snow over what must be bulletproof moguls. 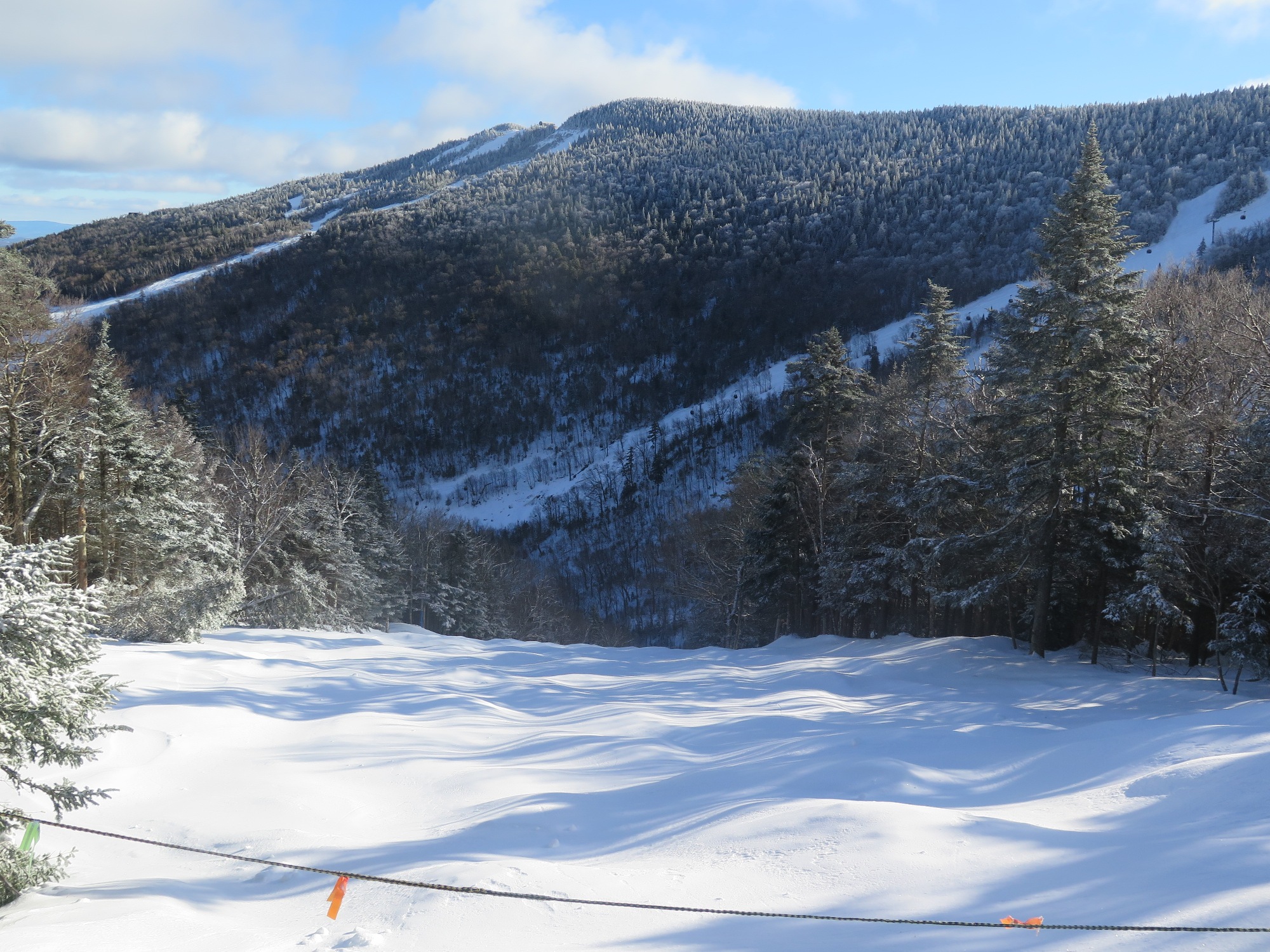 We skied Highline down to the Snowdon triple, a slow and cold ride. We skied Chute to lower Bunny Buster. All runs skier’s left of that were closed for the testing of the new high speed six that should open this weekend. We returned to the gondola for repeat runs on East Fall and Highline. Partway down Highline is a good view of the Superstar sector. 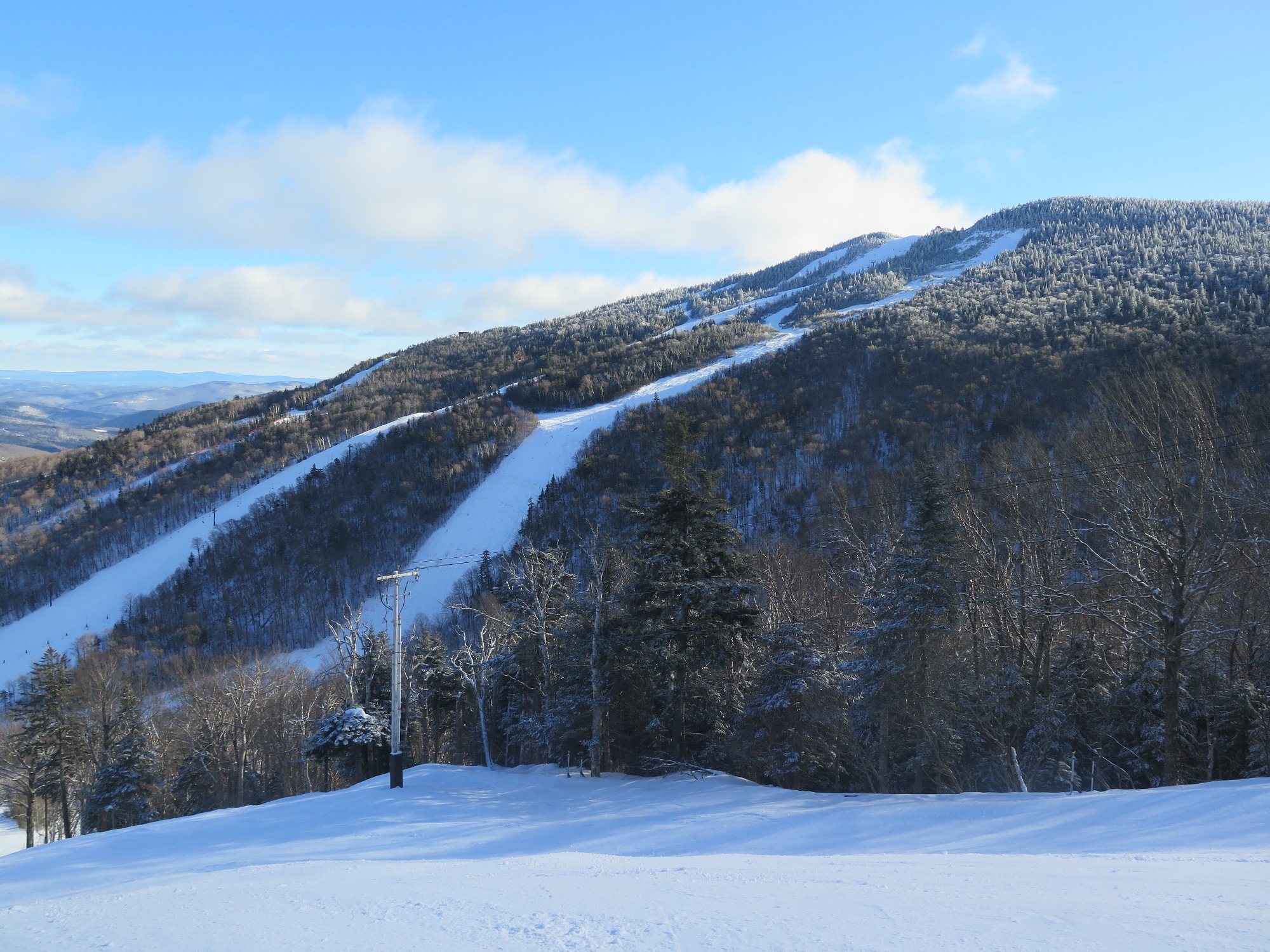 The covered but closed Ovation run is closest in the pic above.

As a Killington veteran, Liz explained that what we were skiing was indeed “Killington packed powder.” This is far from a criticism because one’s expectations at 11F when it rained all day two days earlier are not high. Grooming was excellent, leaving a uniform cm or so of loose packed powder on the surface. On an early December Tuesday there was rarely enough traffic to scrape that surface down to frozen granular. East Fall and Highline had a few exposed spots where you needed to aim for patches of loose snow to make turns, but that was more the exception than the rule.

We moved on to the Superstar chair and skied Superstar, Skye Lark and Bittersweet. In April 1990 and November 1993 I skied multiple runs on Superstar, all in moguls. This was the first time I’ve seen it groomed, and aside from a few slick spots on the top Headwall, it was uniformly easy to turn anywhere.

In groomed condition, that upper Headwall strikes me as a clone of the Wall at Snow Summit, same pitch and man made snow. Of course at Summit the run is almost over after that pitch with a runout to chair 6, but on Superstar there’s another 1,000 vertical to go.

It was now about 2PM, cloudy and shady so we took a hot chocolate break. We finished up with a Skye Lark/Bittersweet variation and two more Superstar runs, total 16,000 vertical.

I’ve been tracking Northeast trail count for a bit over a decade and have often observed them collapse after a rain event. Our target areas of Killington and Sugarbush were both 65% open Dec. 1 before the rain and about 30% on Dec. 4. 30% on Dec. 4 is probably above average but obviously a letdown from the record open terrain a few days before.

I have read somewhere that nowhere is the difference between weekend and midweek skiing greater than in the Northeast. I suspect Superstar would not ski so well at 3:30PM on a weekend as it did today.

Wow..small world. I was at Kmart from Dec 6-9 for coaching duties.

Harv posted a report from yesterday at Killington:
https://nyskiblog.com/fall-skiing-at-killington/

Staff member
When did Killington open?

Tony Crocker":2c1aeuql said:
When did Killington open?
Click to expand...

Tony Crocker":3ss1ol2y said:
When did Killington open?
Click to expand...

Sunday November 3rd at 11am.

Cataloochee sneaked in at 8:30am.

Staff member
Nice to see Patrick is on this. Do you have historical record of early openings as you do for late closings in the East?

Tony Crocker":3ocx9xox said:
Nice to see Patrick is on this. Do you have historical record of early openings as you do for late closings in the East?
Click to expand...

Never really tracked down opening days because it’s harder to trackdown. Sometimes you can have an area open out of left field like Cataloochee. Closing is more gradual and you can focus on only the areas that are still open and then tracked them until no one is left.

PS. Actually I’ve only tracked down Killington’s season as I have season records for over 50 years.
G