Staff member
We thought the final two months of Liz’ 12 month season would be easy. We are in Norway and the ski area Galdhøpiggen is on a glacier on Scandinavia’s highest peak between 6,070 and 7,200 feet and normally open May-October. But we found that it closed Aug. 14. This was not due to the scorching summer that closed all but Hintertux among the Alps’ summer areas. Most of Norway’s summer was cool and rainy, but it was a sparse winter so last year’s snow melted down to the glacial ice, which even the racers deemed unsuitable at both Galdhøpiggen and Fonna, another ski area near Bergen.

Not only was there no lift served skiing open, it was hard to find anyone who would rent us skis. After much research we found Ice Troll, a company that runs guided glacier walks on the well known Nigard Glacier and the higher and more remote Austdal Glacier. Both of these are fingers flowing out of the Jostedal Glacier, the largest in Continental Europe. Austdal is accessible only via a 6km boat ride across Styggevatnet, a lake which was frozen over until July 8. 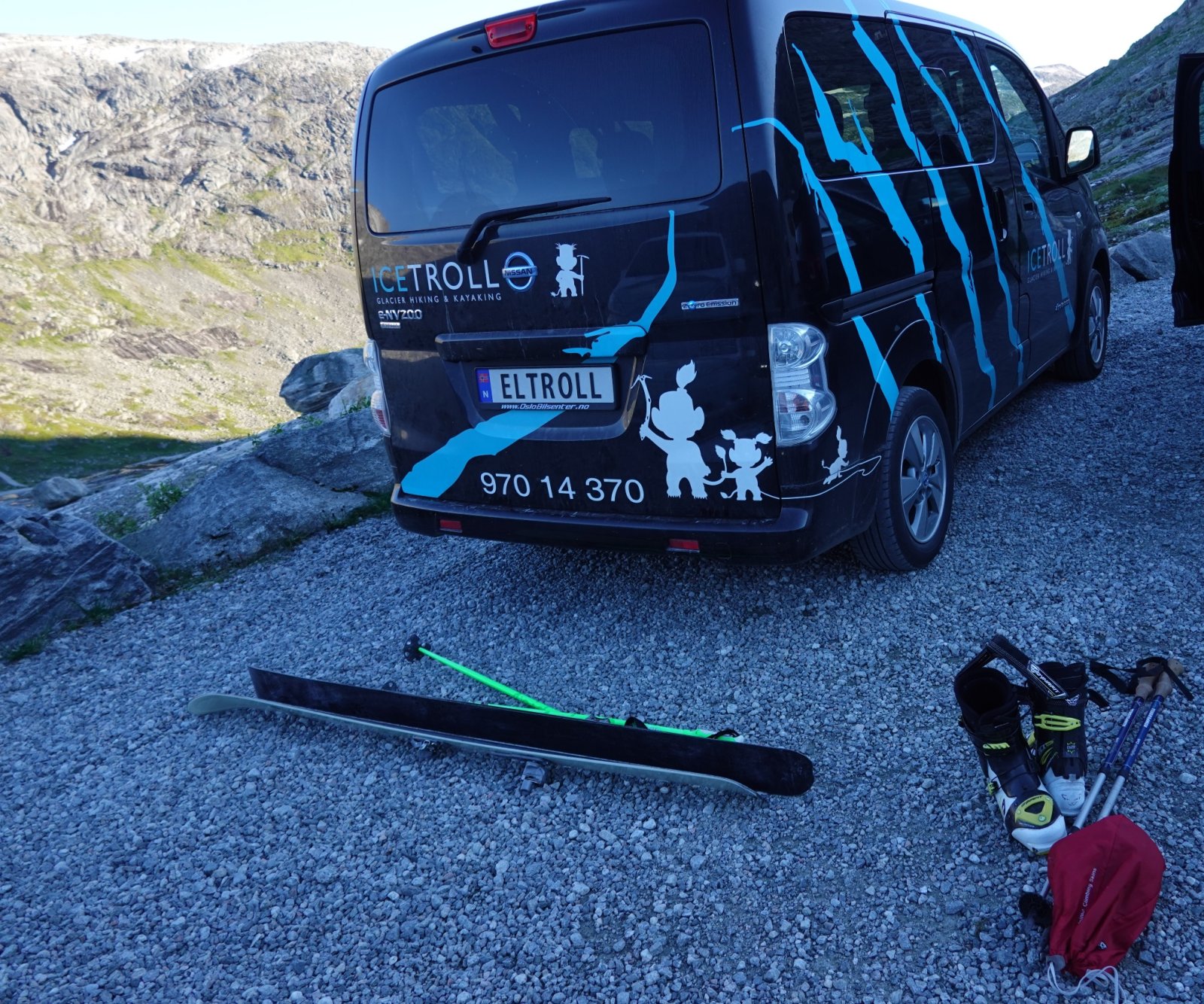 The “EL” is not Spanish. All electric vehicles in Norway have E as the first letter in the license plate. As of now that’s about a quarter of cars on the road and 86% of new car sales.

Ice Troll took us across the lake with the morning tour group and left us there to do our skiing until they came back with the afternoon tour that we joined.

Here’s where the boat dropped us off. 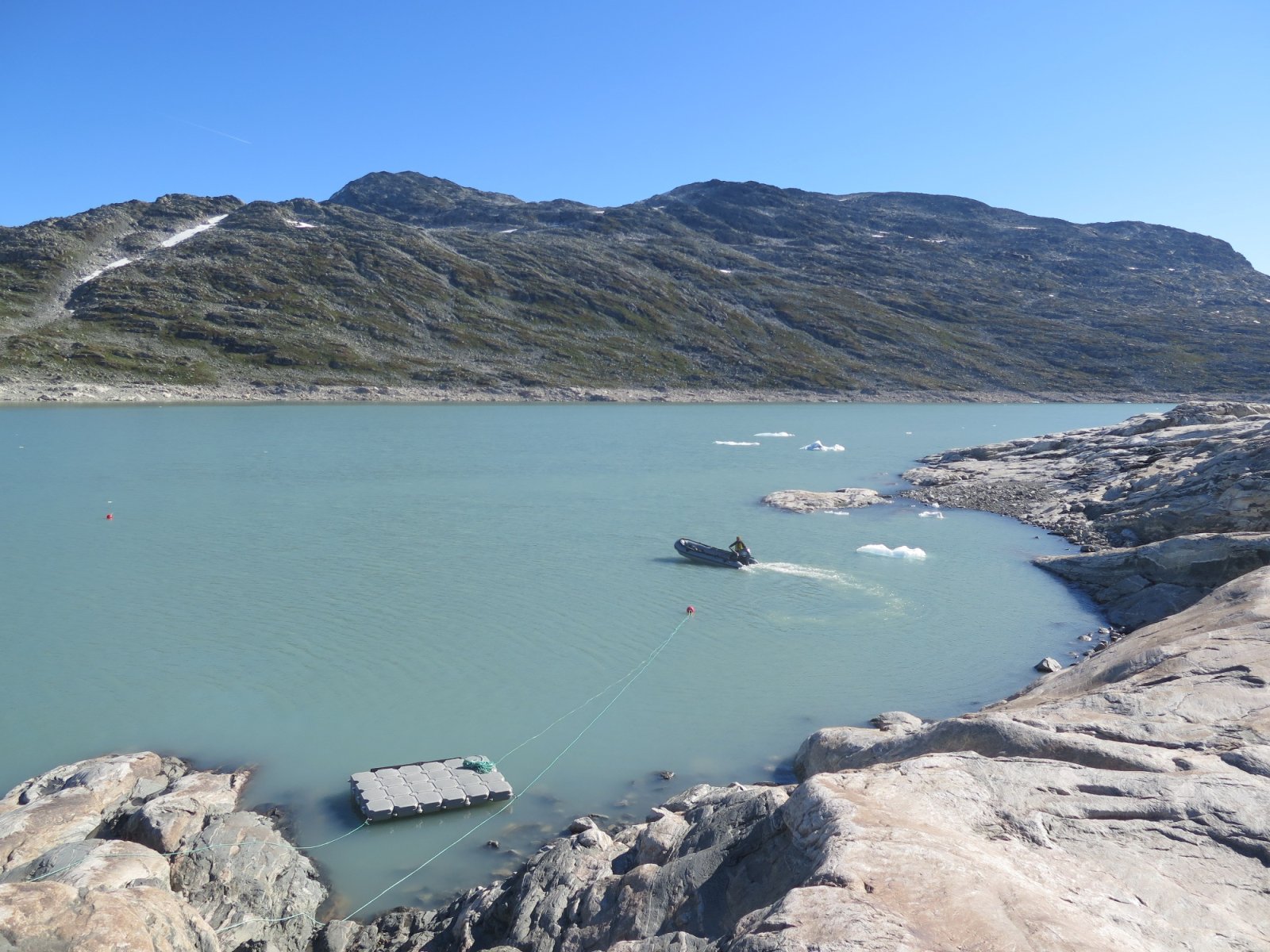 Here the Austdal Glacier meets the lake, leaving some ice caves and occasionally calving icebergs off that 100 foot wall. 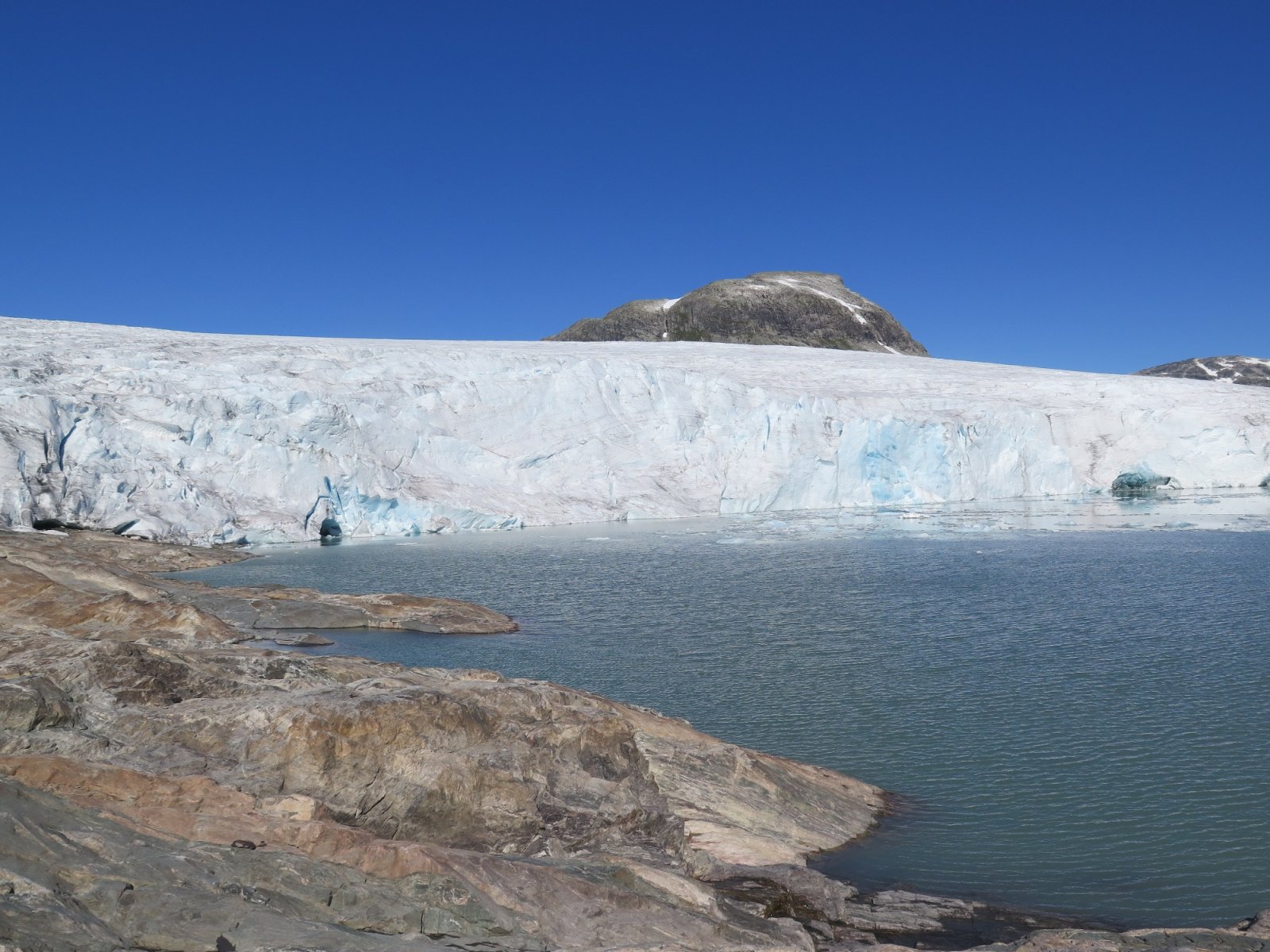 I’m hiking up from the boat landing with a few of those icebergs in the background. 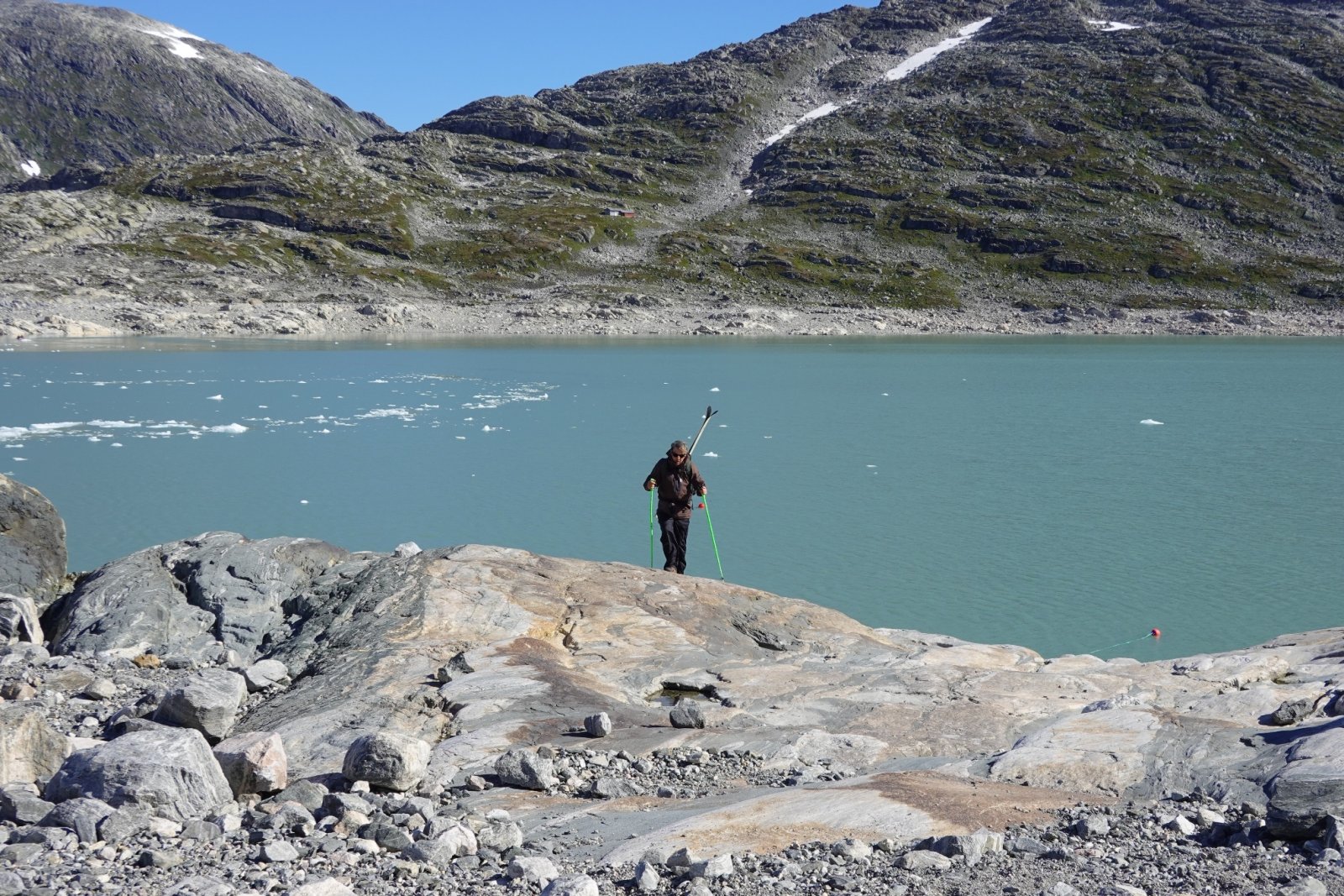 Liz and I are suited up and ready to start our hike. 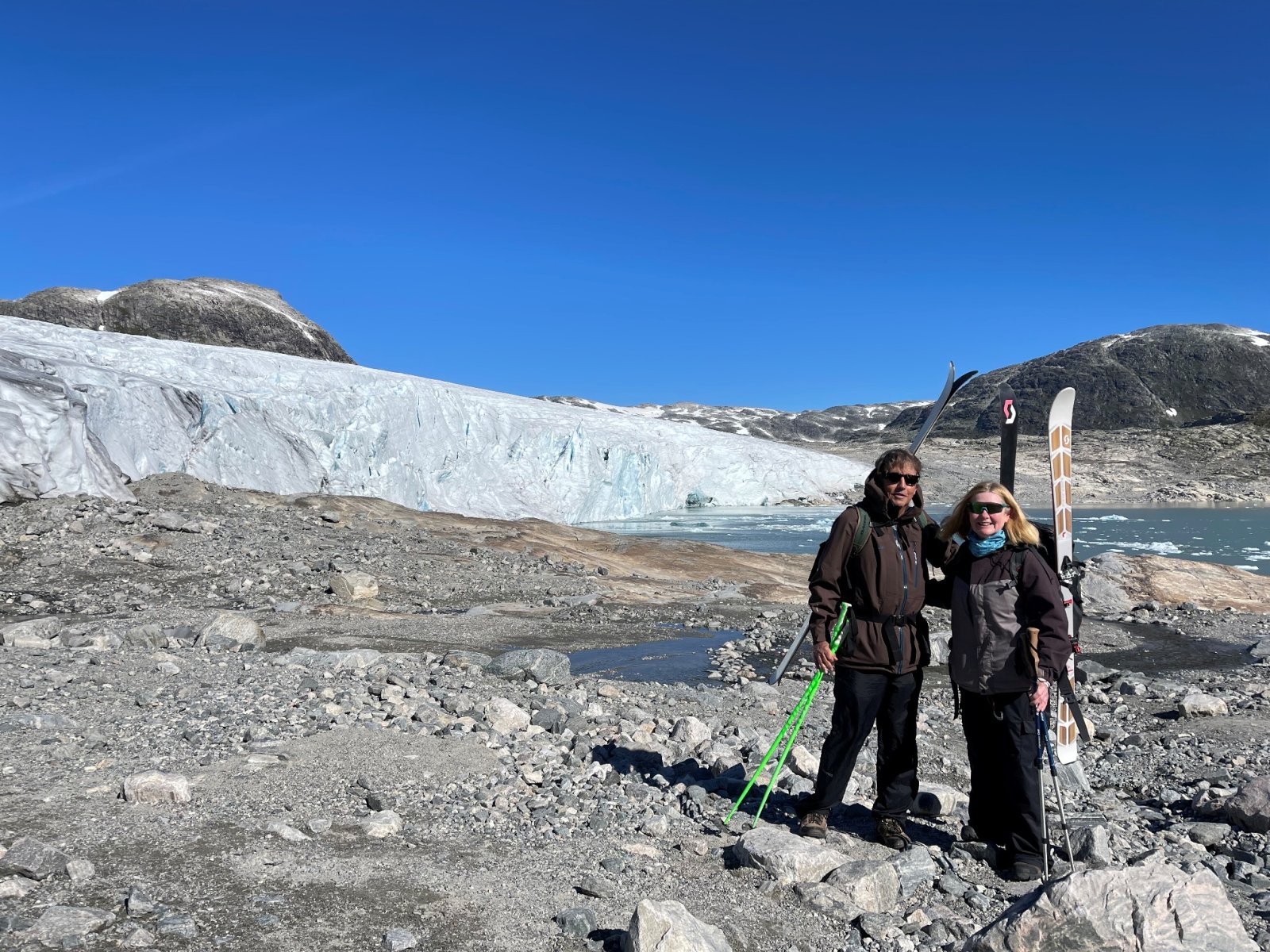 We hiked up along the looker’s far left edge of the glacier. 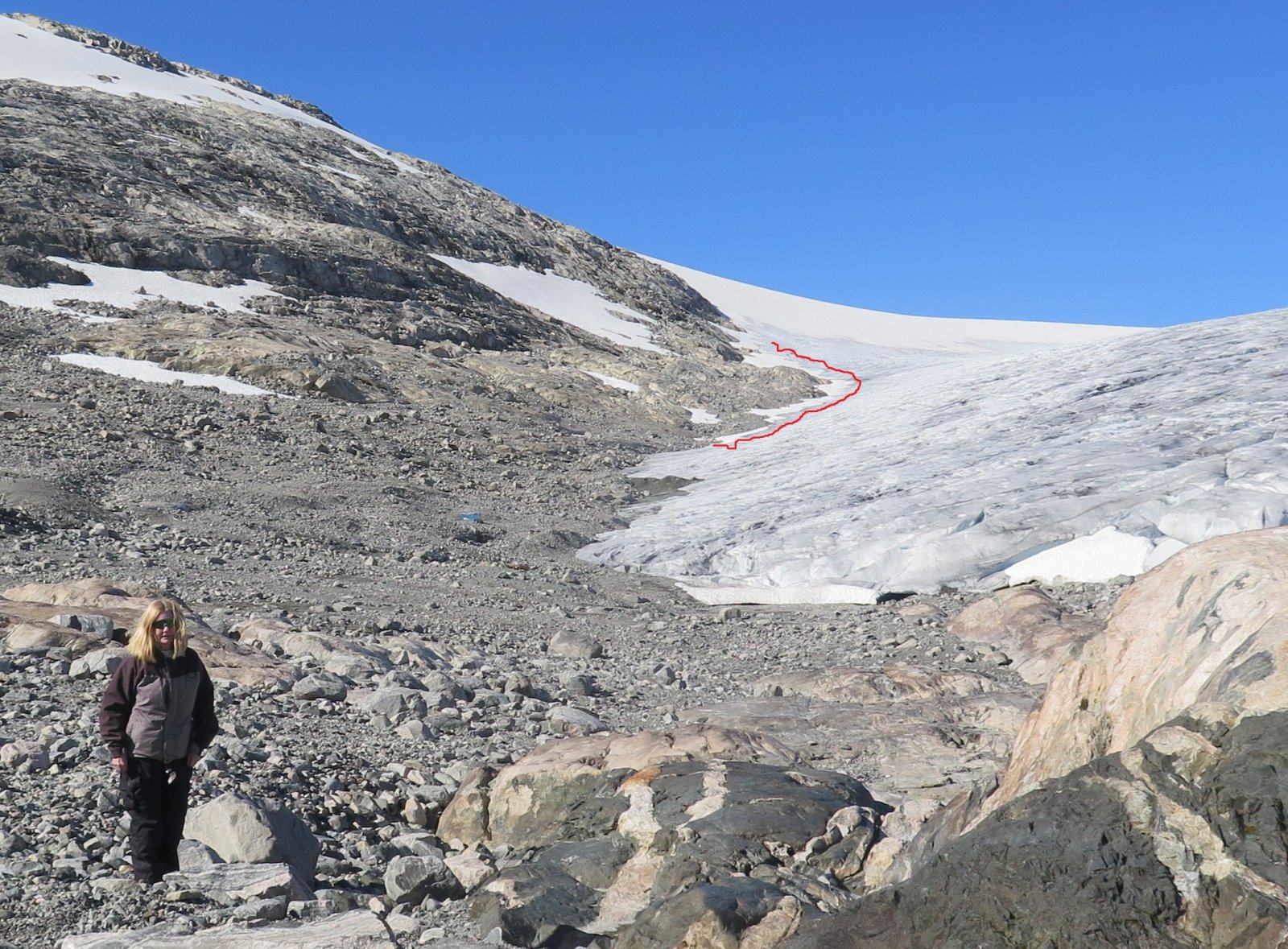 The red line follows the boundary between remaining snow along the edge and the glacial ice. Yes there’s a wide line of snow higher up but it was heavily suncupped and there was crevassed ice between that and what we skied.

We have to start hiking on gravel because the boundary ice looks too thin near the bottom. 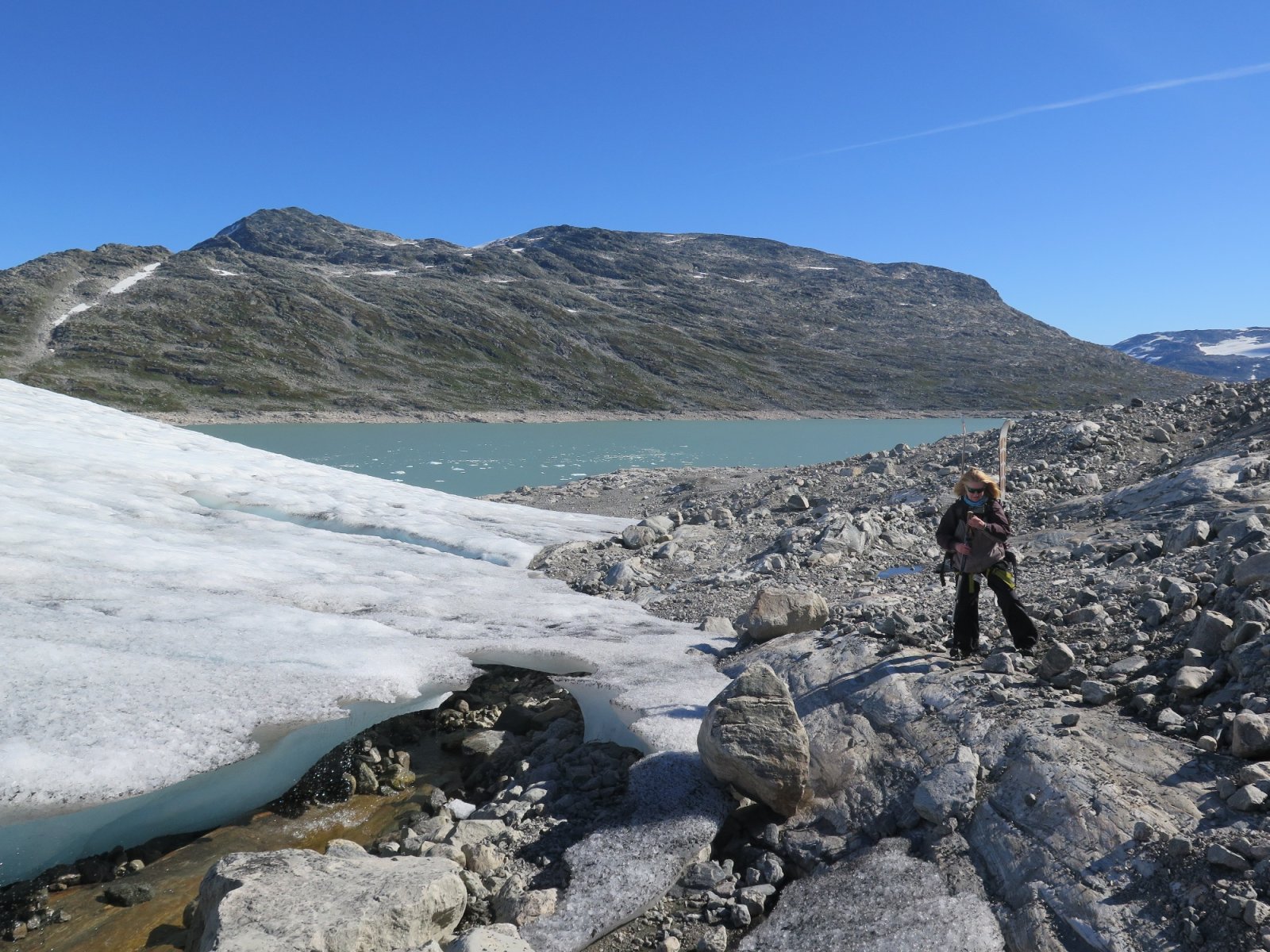 There were a couple of sections where the ice was still adhering to the rock so it was easier to hike on the ice with the crampons supplied by Ice Troll.

Finally we can start hiking in snow. 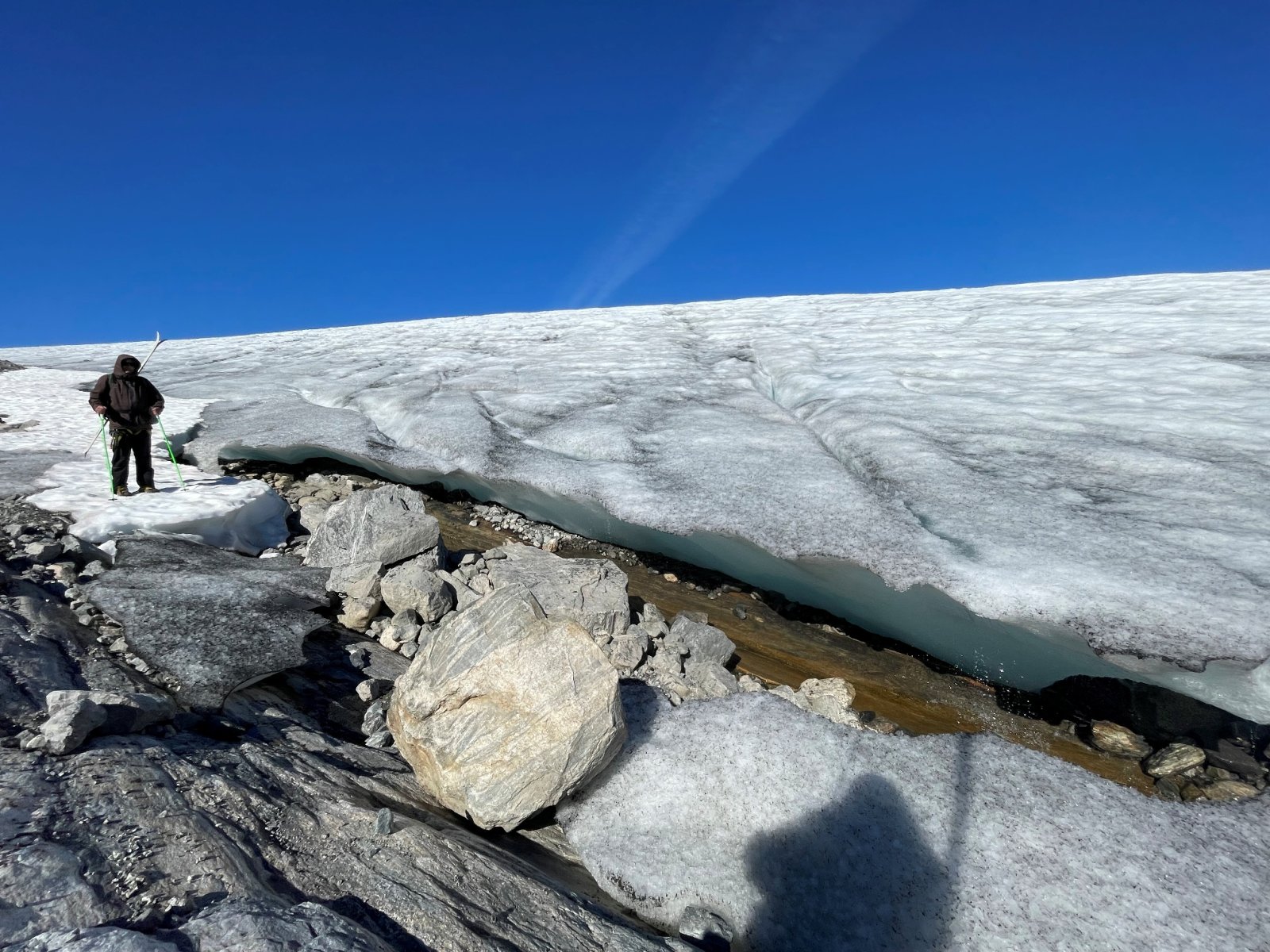 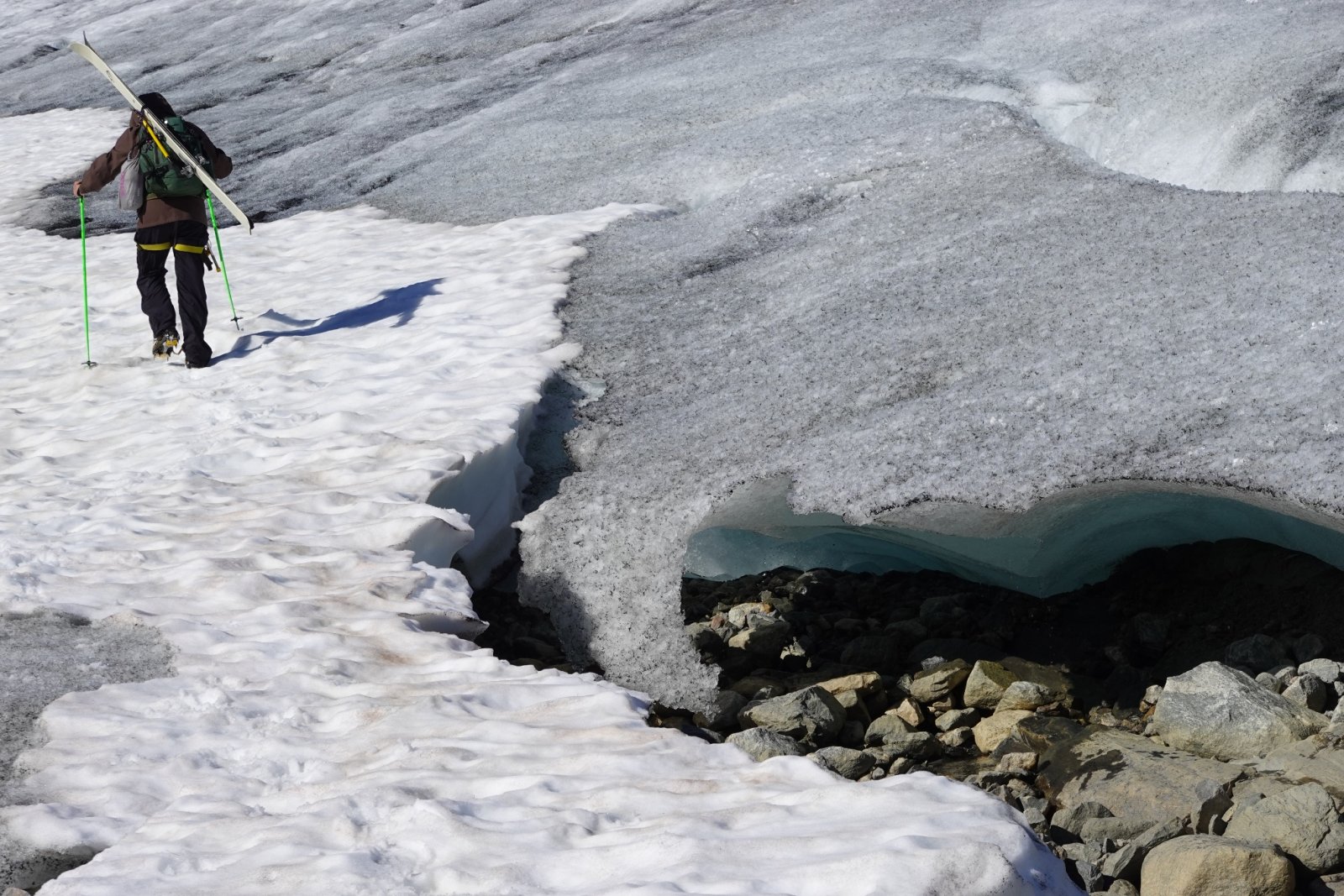 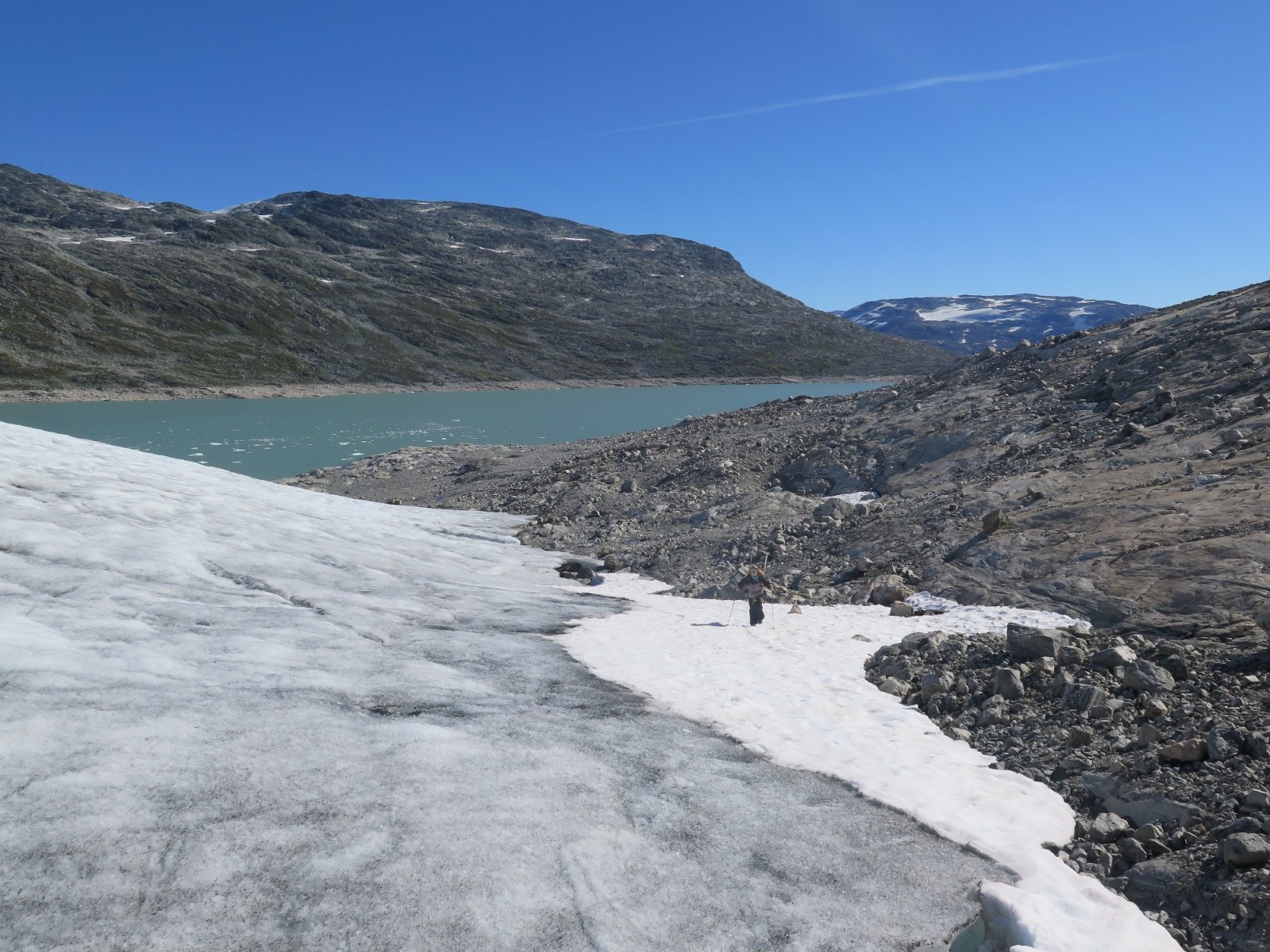 Higher up the snow widens considerably. 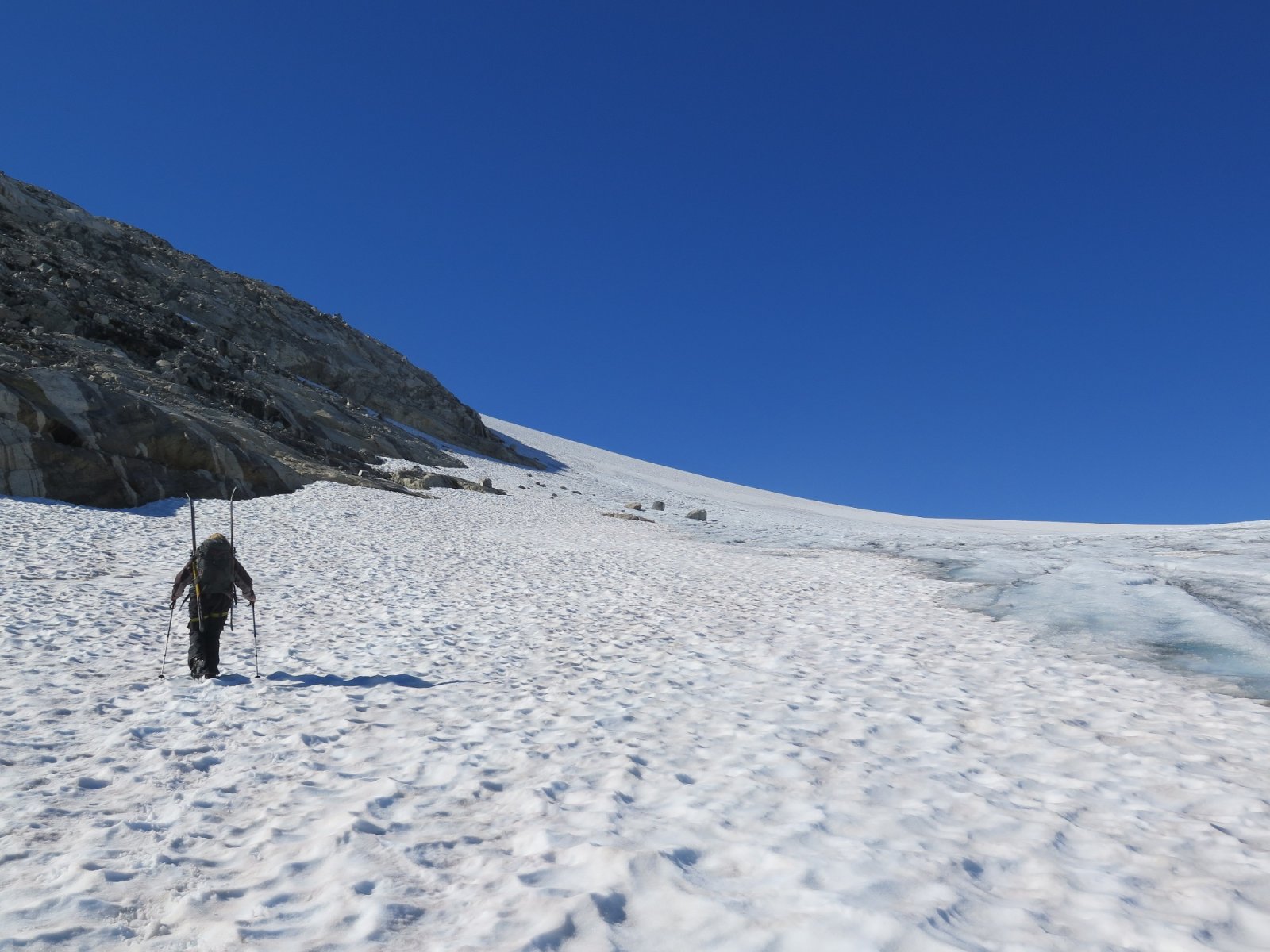 Liz settled on this rock to switch to ski mode while I went a little higher to a larger rock that had a boulder for me to sit on as well. 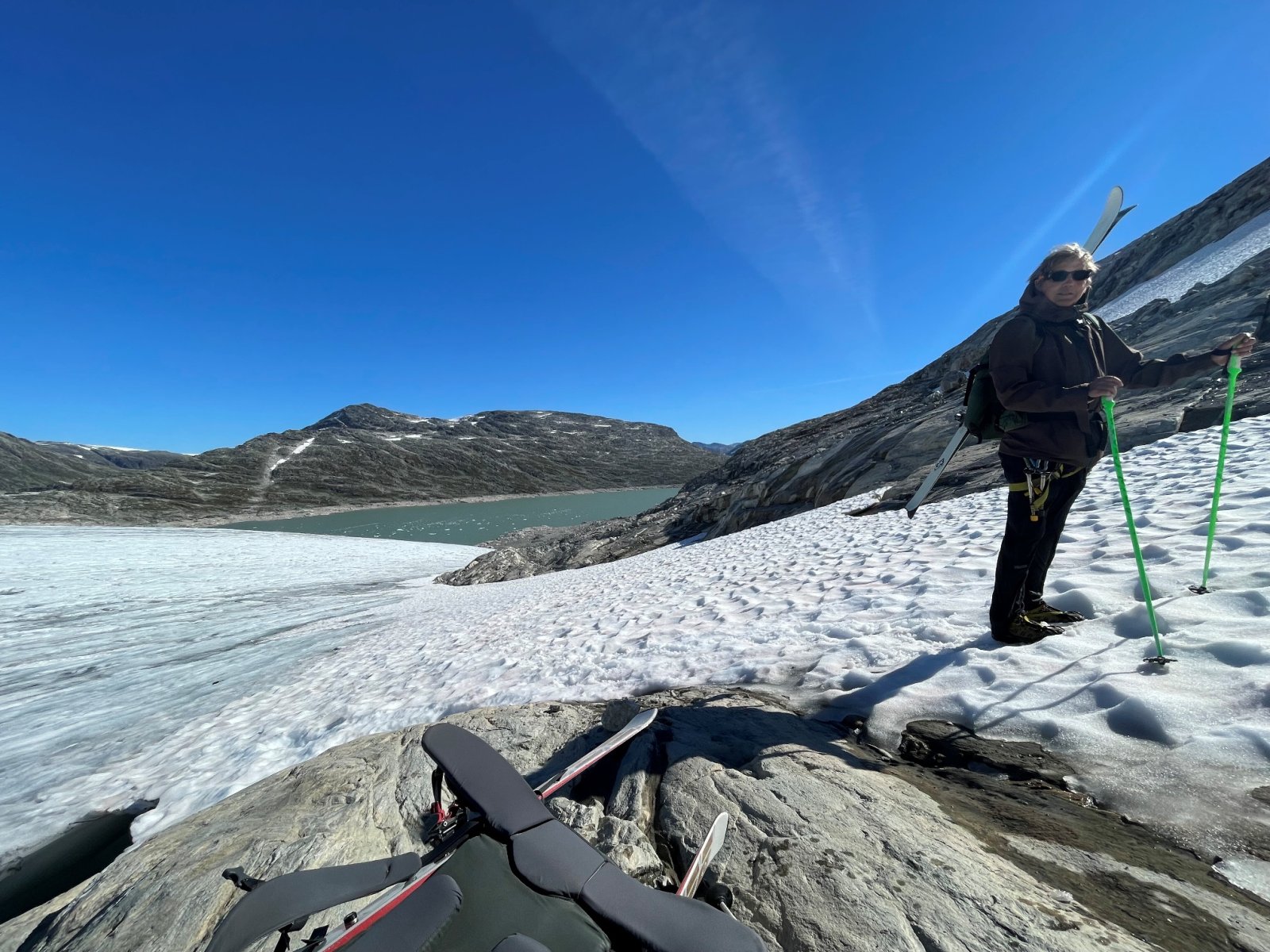 It took about an hour to get here, and it’s now 1:45PM. The snow consistency was good, soft but supportable. The suncups were the main impediment but they were not too deep and I have skied much worse. 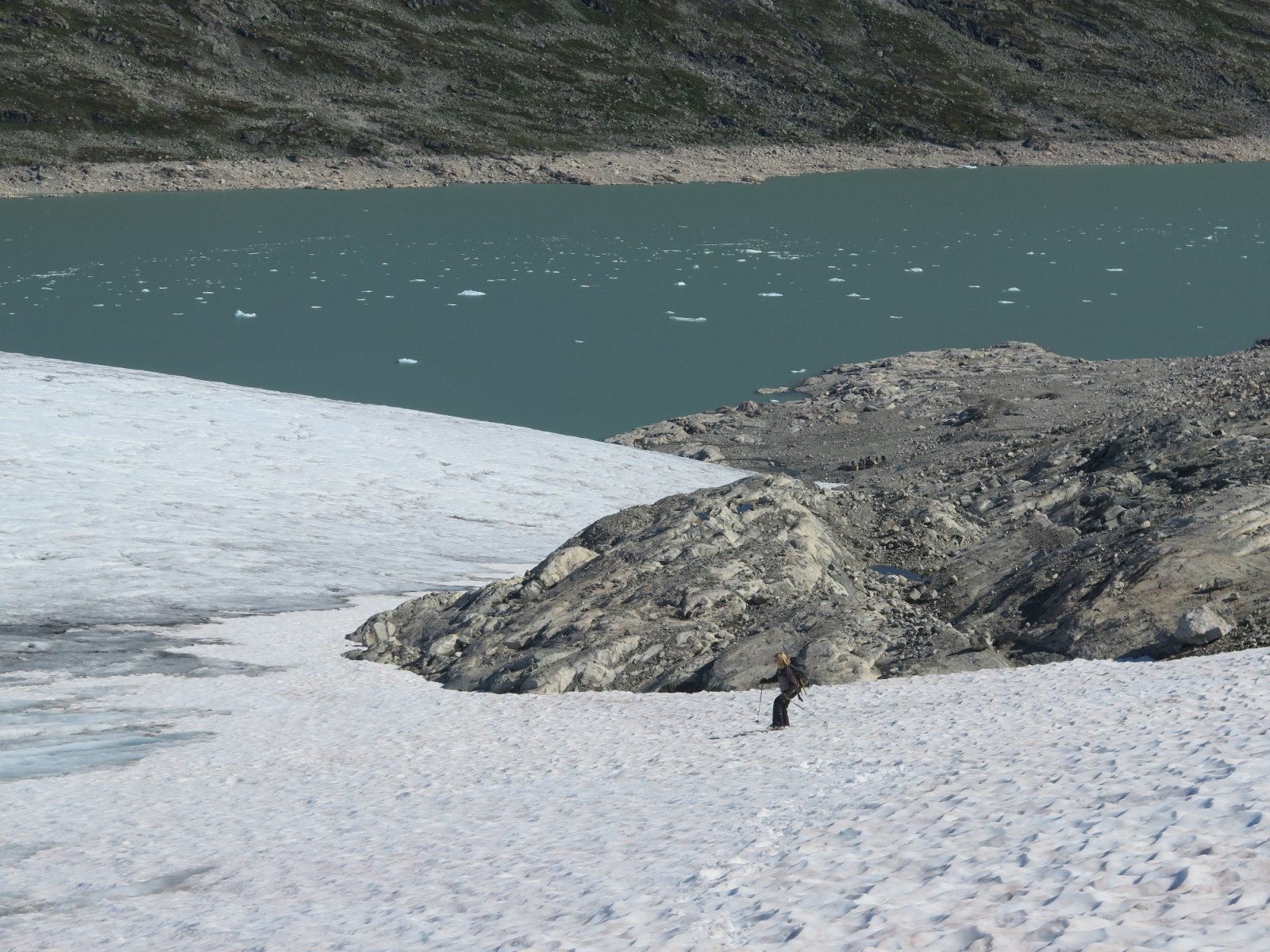 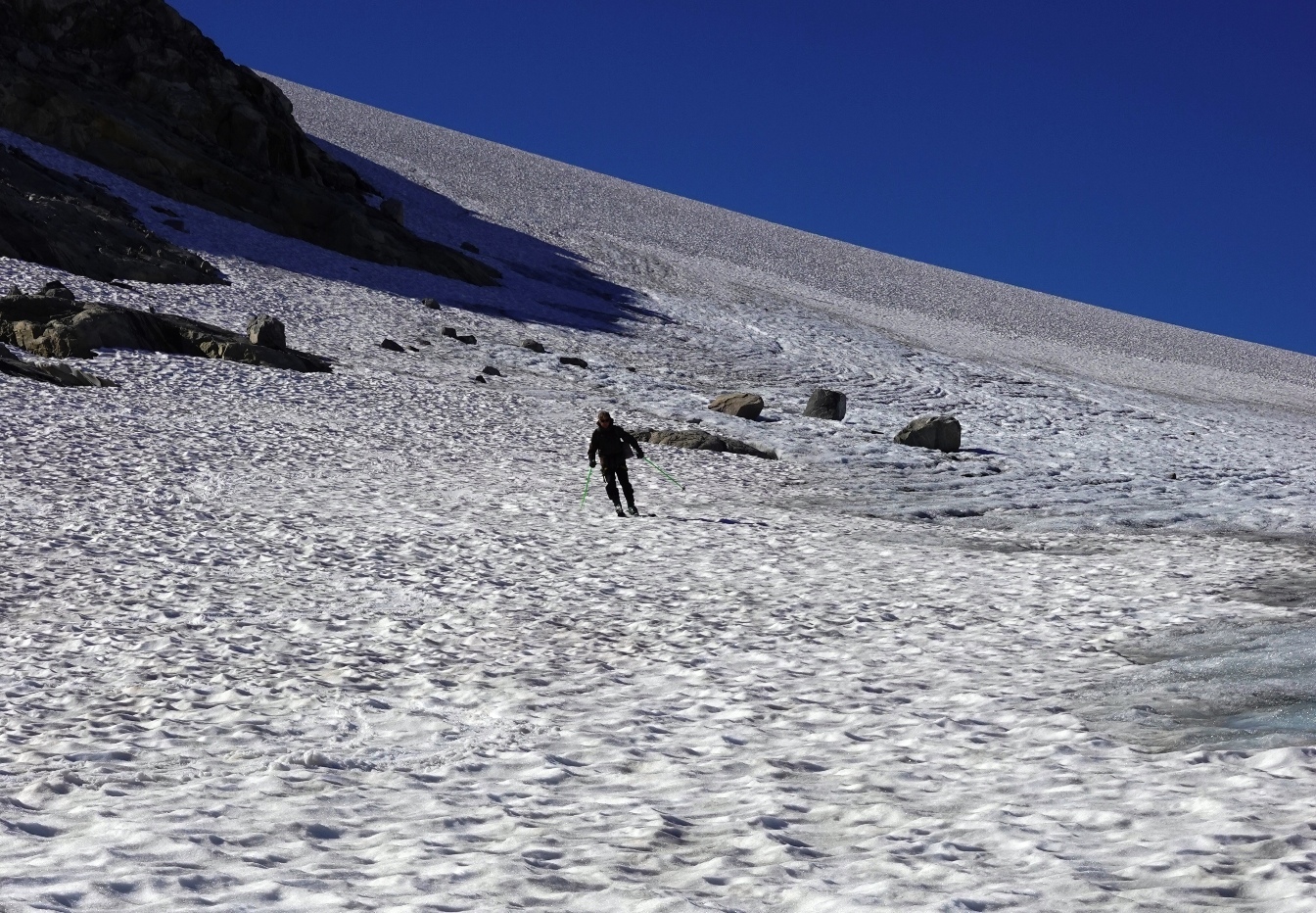 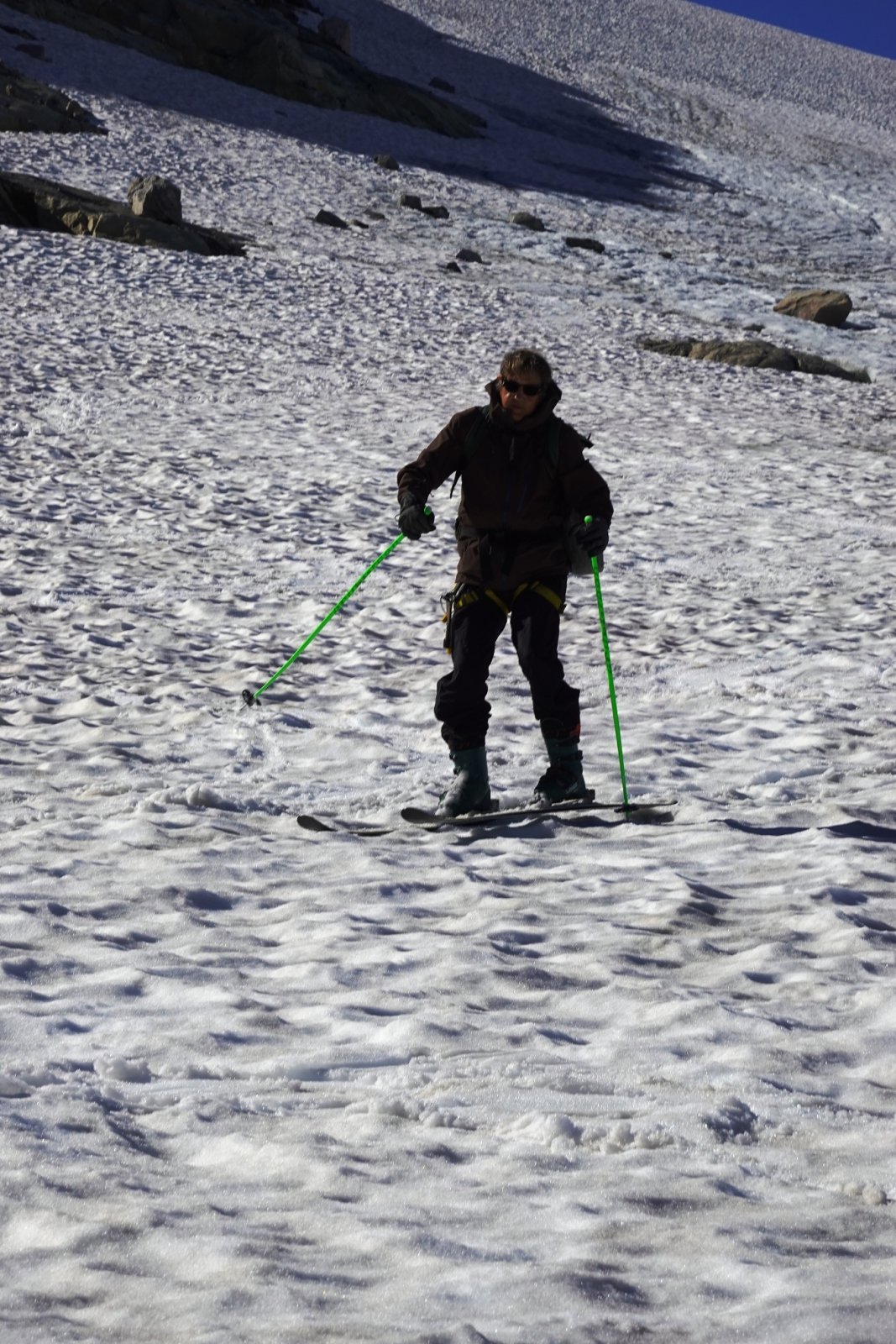 Liz’ changing rock is behind me in the first pic above and mine is off to the left from there.

We then skied the narrower lower section. 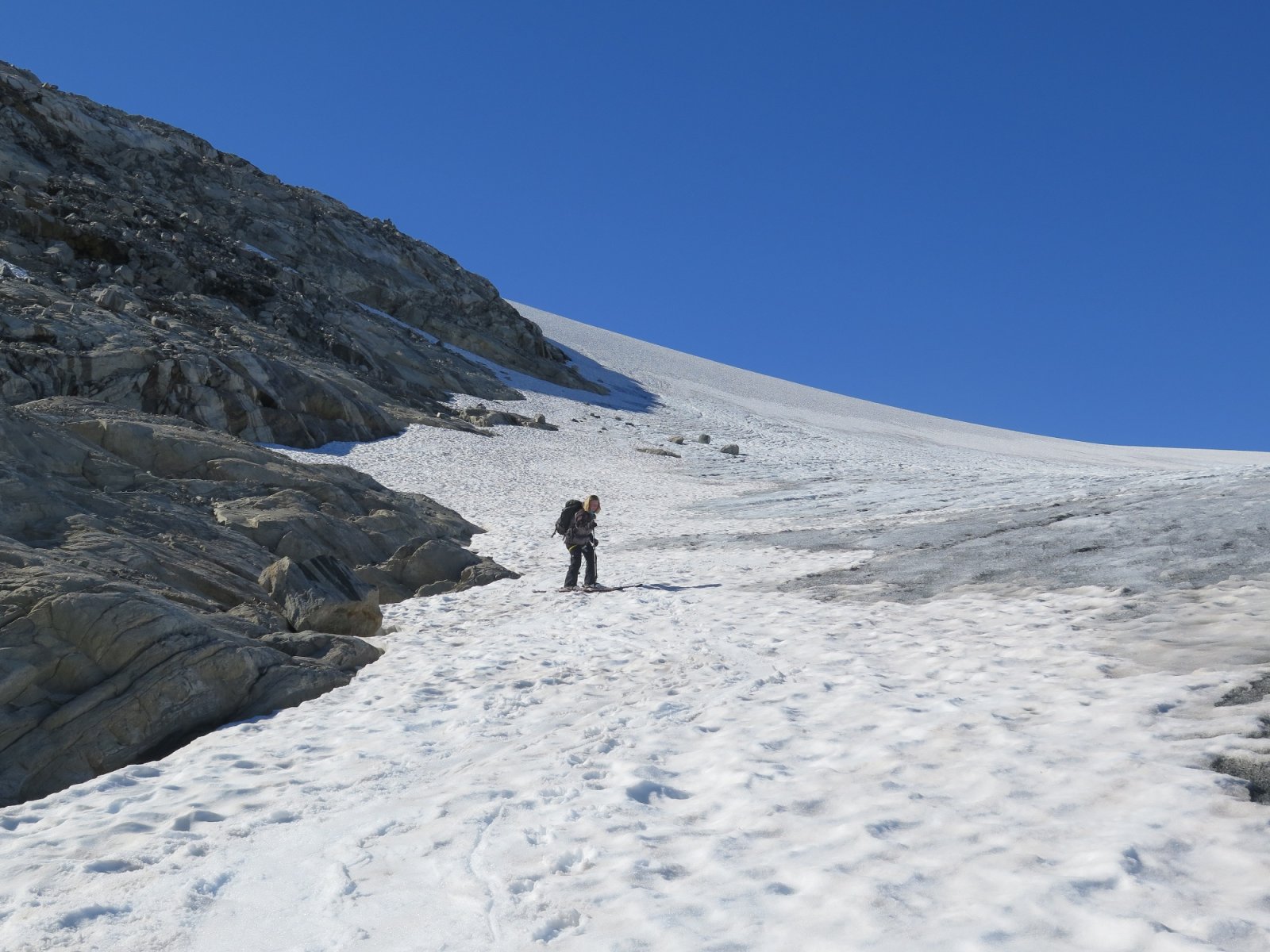 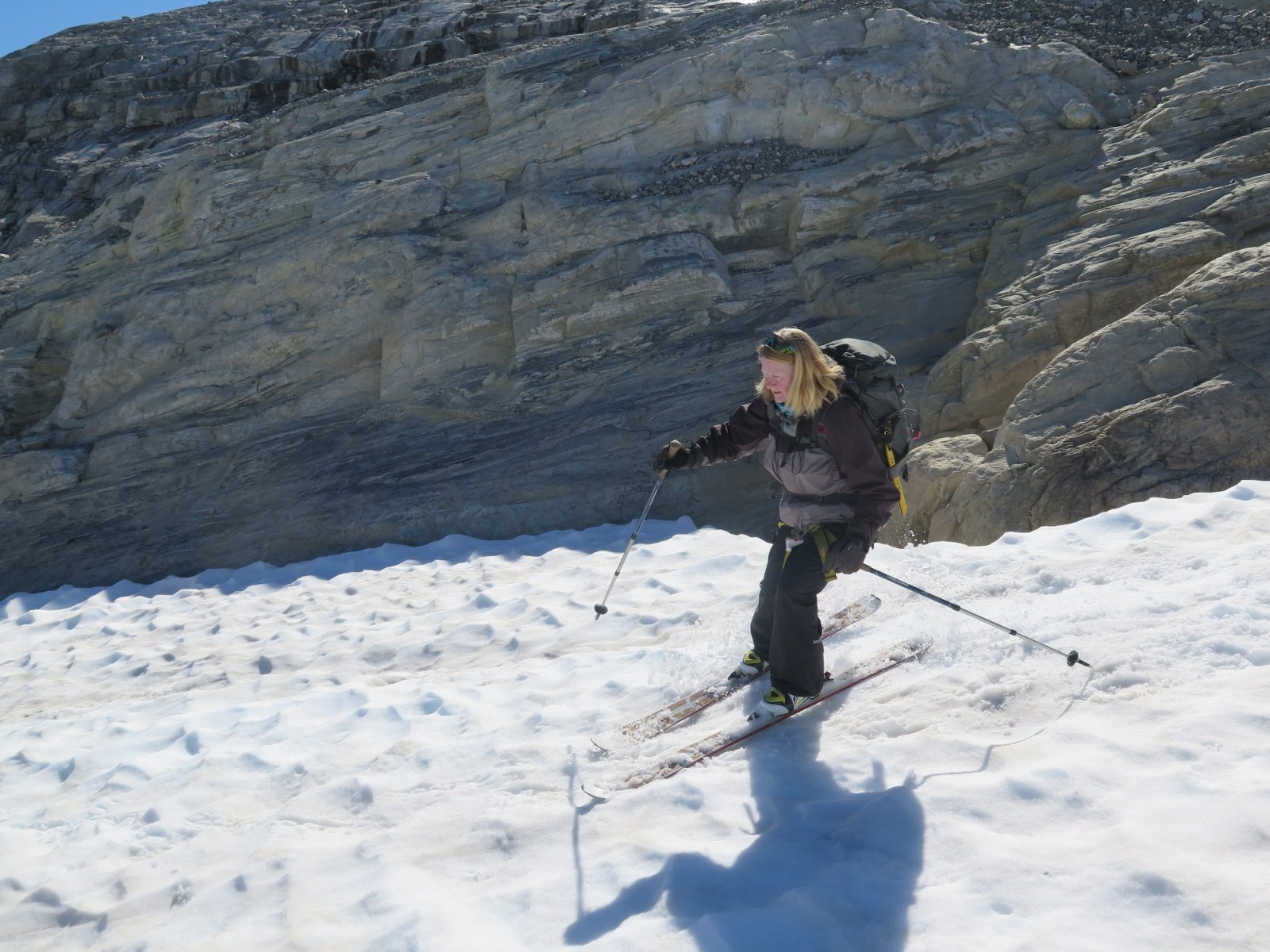 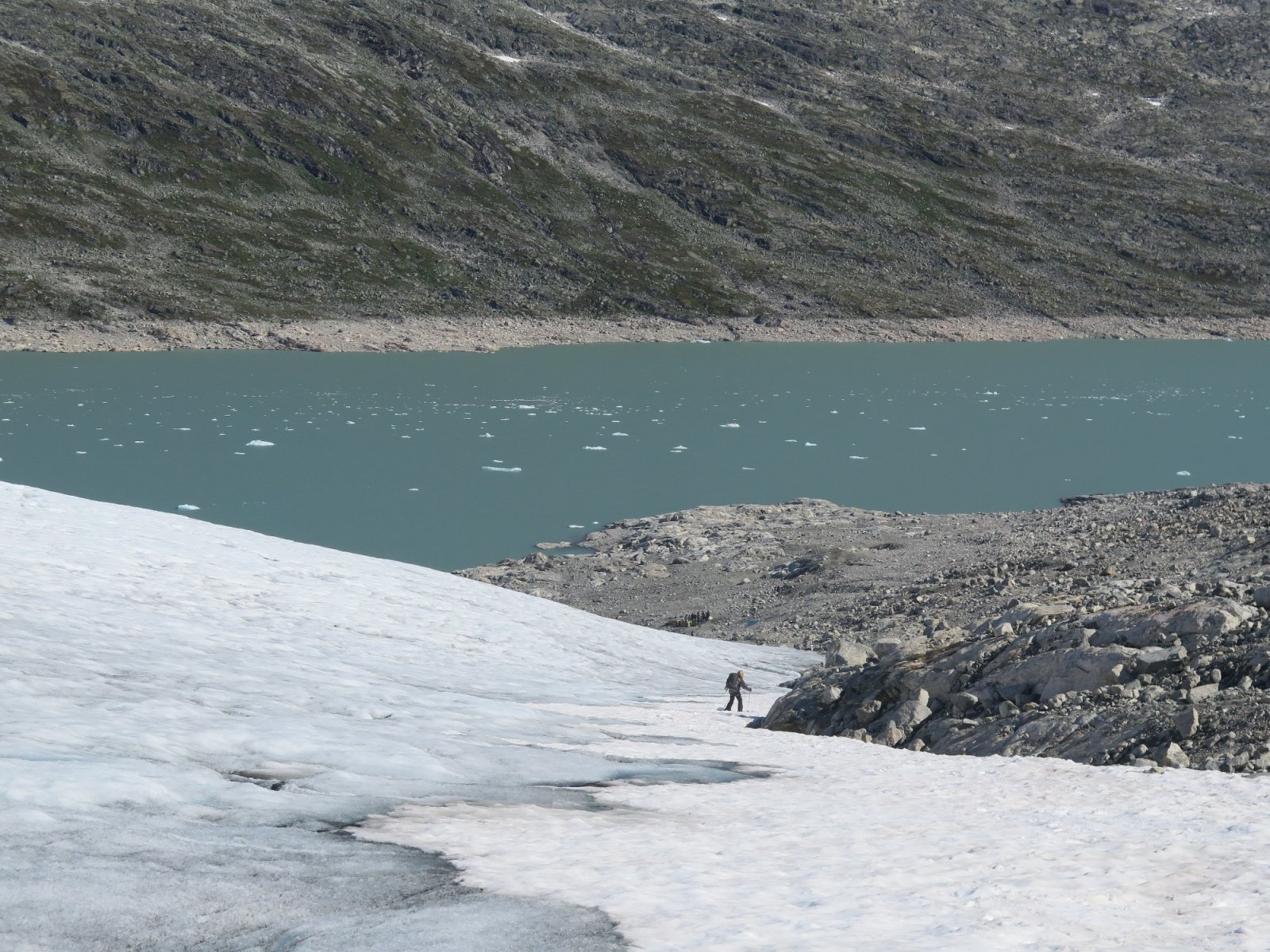 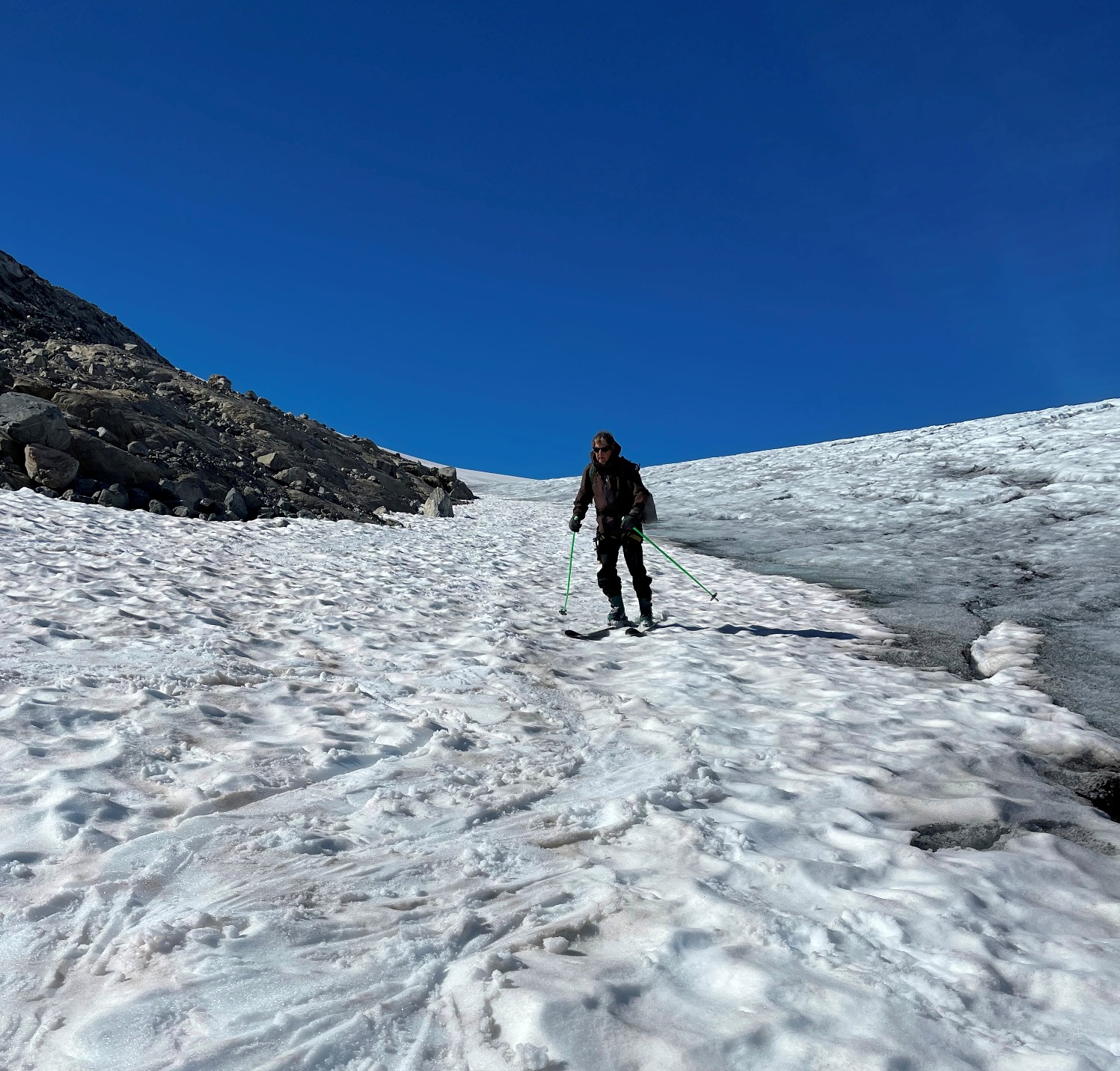 Liz skied 190 vertical feet. There was a short snow patch lower down but I had to go out onto the glacial ice for a couple of turns to get to it. That bought me up to 250 vertical. The gravel and boulder downclimb from there in AT boots was tedious. In retrospect it would have been easier to ski about half that distance on the ice. However Liz wanted no part of that and I didn’t want us to get too separated.

We got down about 2:45PM safely and with mission accomplished. We had some snacks and waited for the afternoon tour group that arrived at 3:30PM.
Last edited: Sep 3, 2022

Fascinating to watch Tony and Liz continuing their inexorable move into Patrick's World™. I'm impressed by the physical effort, time, planning, and expense that were involved in skiing 200 verts of suncups. Similar to indoor skiing, this is "different strokes" territory -- I would've gone mountain biking.

Staff member
The difference between Liz and Patrick is that she had never done this before. We both consider it nutty to do it every year, unless you live within daytrip distance of year round snow like most of the PNW guys on TurnsAllYear.com. This year’s experiences for us only reinforced that opinion.

We were in Scandinavia for a month for many reasons, so the streak consumed two days and a few hundred bucks extra. We might have done the guided glacier walk anyway.

The streak dedicated trip was the one to Timberline. Liz and I think that’s one of skiing’s experiences worth checking out, and it’s much better quality to do it for June/July than for August/September.

The odds are essentially zero that this streak will continue, particularly since I’m having a bunion removed next week. Liz had this done in October 2017 and it was two months before she could fit in a ski boot.
Last edited: Sep 3, 2022
S

Bravo for Liz. Oh to have the time.

As stated: Worth it once, but definitely tail wags dog territory.

EMSC said:
As stated: Worth it once, but definitely tail wags dog territory.
Click to expand...

Yes, though it was useful recon too. If you come to Norway during midnight sun season in June, it's worth bringing ski boots for the 3 lift served outdoor areas. The ski areas are not where the midnight sun is though. The taller mountains and heavier winter snowfall for a summer snowpack are in the southern third of Norway.

I can't wait to hear from you guys if I go skiing in South Africa one summer?

Staff member
I may get to southern Africa skiing before Patrick does. We are probably signing up for a custom tour of Namibia that ends July 1, 2024. We would definitely spend a week in South Africa after that.
Last edited: Sep 19, 2022

Patrick said:
I can't wait to hear from you guys if I go skiing in South Africa one summer?

I assume you mean Lesotho?

Potentially "real trip"; it's really the many repeat performances using significant resources to keep going back to the same places for tiny strips of bad, at best, snow that we're calling out as only occurring to keep The Streak alive. And really I'm just saying you can be up front that many of your trips are about The Streak as much as they are to do/see any other things. It's fine if that makes a lot of decisions for your trips; it's a really unique thing that you've been able to pull off for so long, considering where you live and the obstacles overcome, especially of the last couple of years.

Staff member
There are two ski areas, Afriski in Lesotho and Tiffendal in South Africa. Tiffendal has been closed since the pandemic. Afriski is closer to Johannesburg, the major population base of the region and presumably the one we would try to visit. Jimmy Petterson has skied both and he says Tiffendal's road access is very difficult.

EMSC said:
significant resources to keep going back to the same places for tiny strips of bad
Click to expand...

Same places? Not really.
I've skied 136 different areas since I started my ski streak. Just in the first 1.5yr of the pandemic was I severely limited in travel to other provinces/regions without mentioning countries.


Tony Crocker said:
There are two ski areas, Afriski in Lesotho and Tiffendal in South Africa. Tiffendal has been closed since the pandemic. Afriski is closer to Johannesburg, the major population base of the region and presumably the one we would try to visit. Jimmy Petterson has skied both and he says Tiffendal's road access is very difficult.
Click to expand...

There is a third one near Capetown, but it's a private club that might have a rope-tow.

Patrick said:
There is a third one near Capetown, but it's a private club that might have a rope-tow.
Click to expand...

Now that would be interesting. What is the clubs name (just curious to see if I could look it up online)? Certainly mountainous terrain around Cape Town, but unaware that anything in that area got high enough in altitude to get snow (at all yet enough to ski occasionally).

EMSC said:
Now that would be interesting. What is the clubs name (just curious to see if I could look it up online)? Certainly mountainous terrain around Cape Town, but unaware that anything in that area got high enough in altitude to get snow (at all yet enough to ski occasionally).
Click to expand...

I found the info and seen pictures, there is a website. Rope tow is run by the South Africa Ski Club (name?). Club and skiing started in the 1930s.

Very interesting, not too far really; though it appears maybe 2-2.5hours drive to where the skiing would be. Almost like going to Vail from when I am for a day trip. Long, but totally possible.

Staff member
Cape Town temperatures and precipitation patterns are similar to L.A. Matroosberg is the highest peak in the region at 7,200 feet. That's about the same as the base elevation of the Big Bear areas. The video on that website shows hikers in patchy snow on very rocky terrain. There will rarely be enough snow for skiing, and the odds of some visitor from halfway around the world being there at the right time is miniscule.

FYI from 2016-2018 Cape Town had a quite scary water crisis. Some of the reservoirs are downstream from Matroosberg.
Last edited: Sep 14, 2022

I think this report is great!

Just a small amount of ski time added onto glacier touring. I would love to ski tour on some Norwegian Glaciers.

What surprises me is that they just left you off to ski a glacier without a guide. I'm sure they gave you recommendations, but....it's Europe. Do what you want......Ski what you want, free to fall in the crevasse, but I want my rental equipment back.

ChrisC said:
What surprises me is that they just left you off to ski a glacier without a guide.
Click to expand...

I'm surprised that @Weathertoski didn't have something to say about that!

ChrisC said:
What surprises me is that they just left you off to ski a glacier without a guide. I'm sure they gave you recommendations, but....it's Europe. Do what you want......Ski what you want, free to fall in the crevasse, but I want my rental equipment back.
Click to expand...

The guy who owns the operation set us up and had one of his people bring the rental gear and meet the day before. The guide on the morning was not a skier and made a point of not giving us specific advice. He did insist on giving us harness, crampons, ice axe, ice screws and a rope though.

Some of our pics show the ice vs. snow boundary quite clearly. Yes Norway is the land of ski touring, as evidenced that they only had AT and not alpine skis to rent. But the best time to do it is April - June, similar to Iceland.

Staff member
If ChrisC wants to do ski touring in Norway, Lyngen Lodge is the place to do it.