Tony, where are you driving for tomorrow's lunar eclipse?

Staff member
I would rarely drive anywhere for a lunar eclipse. But tomorrow is another Selenelion opportunity in the Pacific time zone. Unfortunately neither Adam in Encinitas nor Richard in San Clemente are home, so I'm not motivated to drive 7 hours round trip to Mt. Laguna east of San Diego as in 2015. I think we will drive up to Mt. Wilson and possibly climb San Gabriel Peak, which is the high point on the front side of the mountains overlooking L.A. But both horizons have other mountains at long distance so I doubt we'll get the view we had at Mt. Laguna.

Staff member
We had rather precision timing for this excursion, not much time to spare. We left home after 6PM, started hiking from the Eaton Saddle trailhead at 6:43 and reached the top of 6,164 foot San Gabriel Peak 50 minutes later vs. the 20 I had estimated. Here's the view over Mt. Wilson's broadcast and astronomy facilities at 7:36. 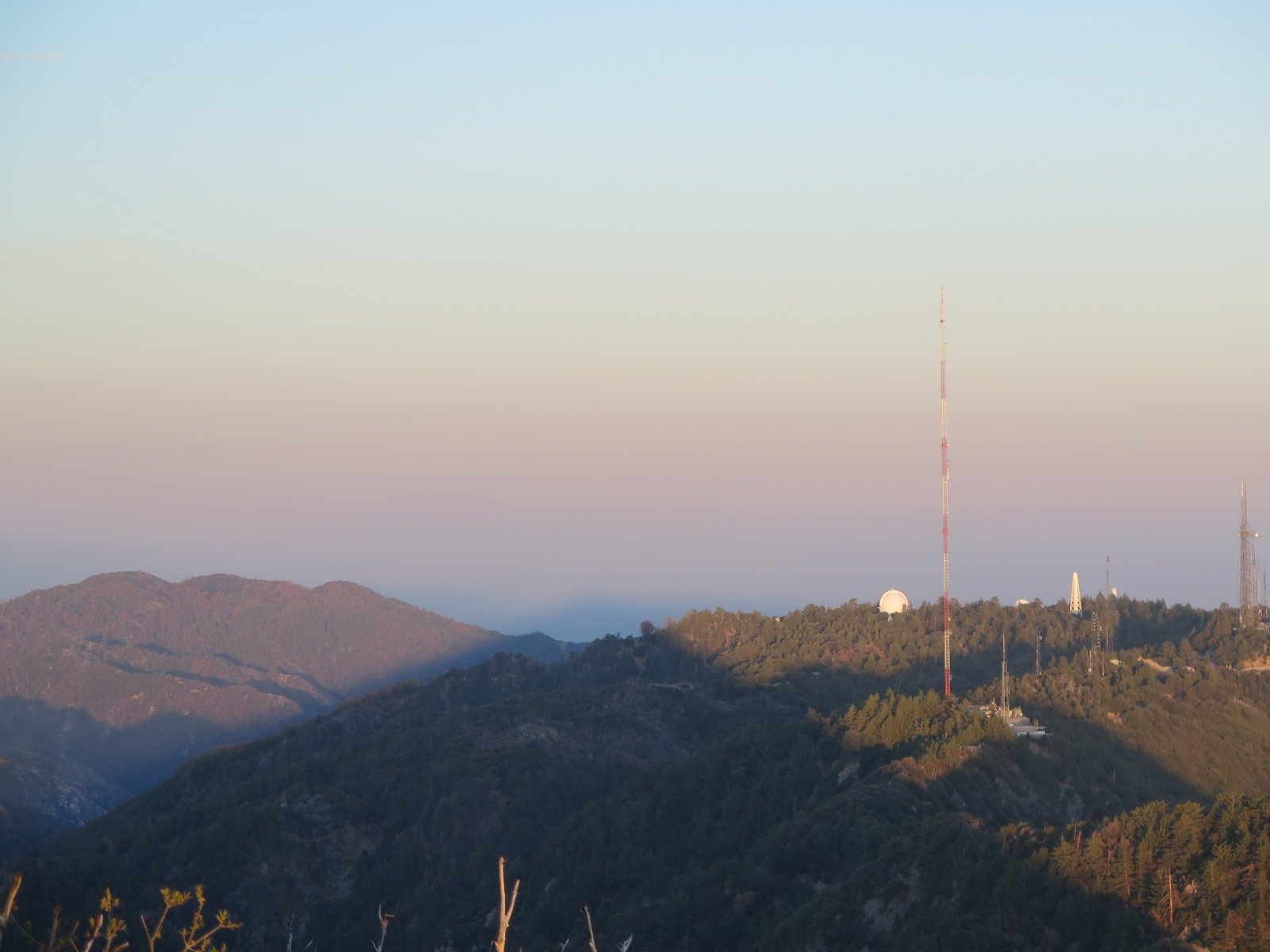 Note the cone shaped shadow San Gabriel Peak is casting at center. It looks like we have at least 10 minutes before sunset.

That cone shadow should be pointing close to the Moon, and sure enough the Moon becomes hazily visible to the eye at 7:40. The Moon in this pic is at 7:42 with the peak shadow still clear. 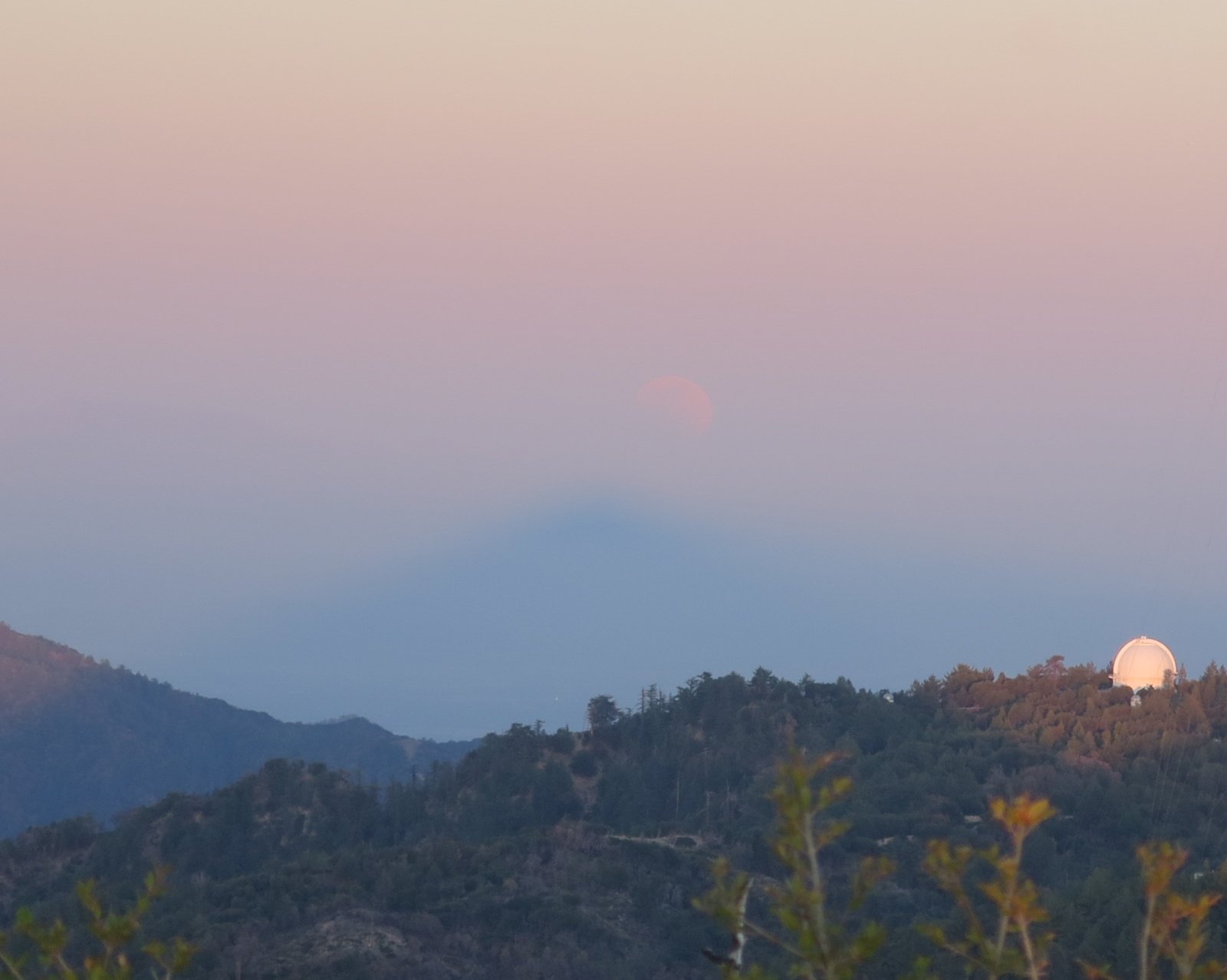 Two minutes later the Moon is clearer but the peak shadow is less well defined. 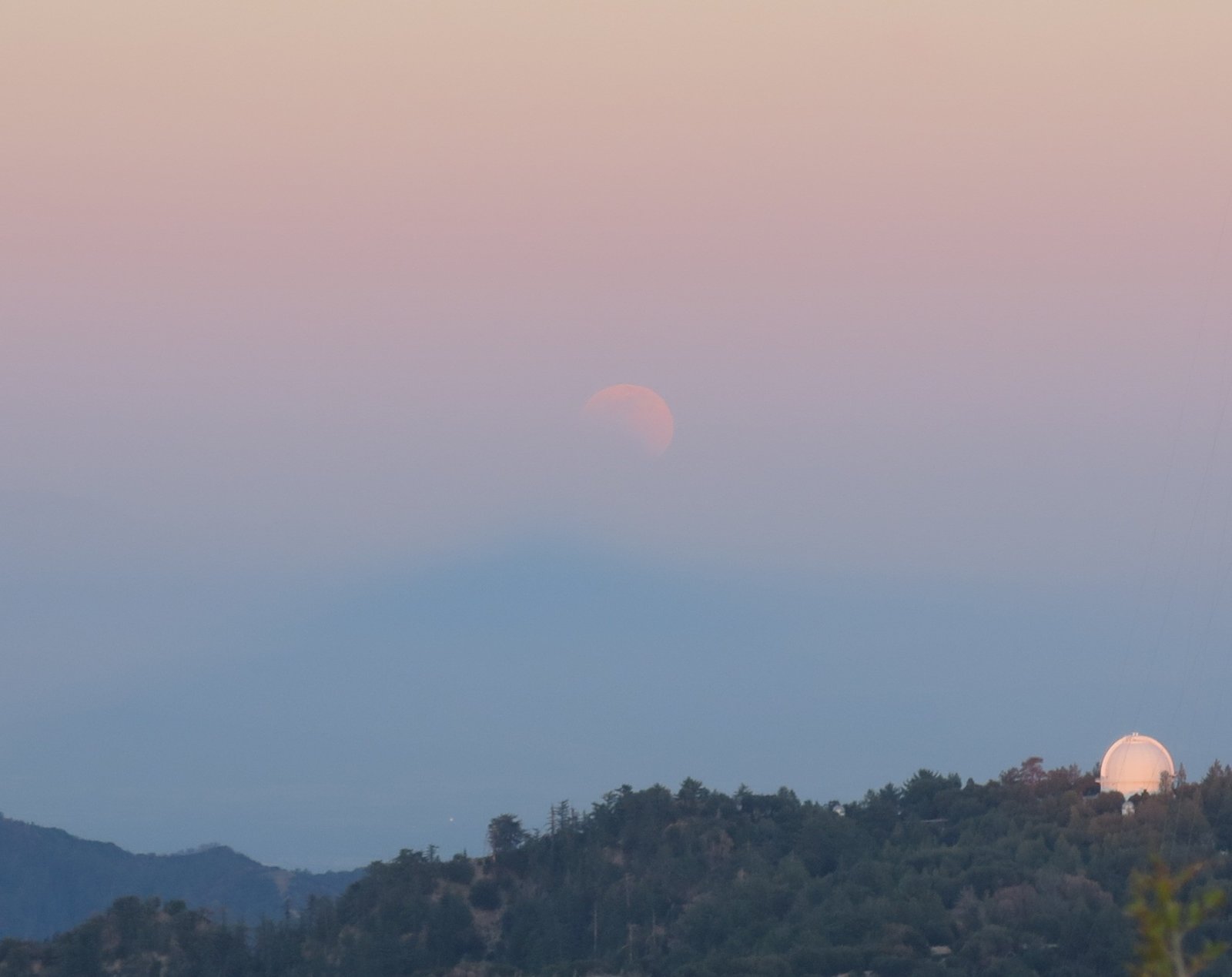 Sun is just above the horizon at 7:46 with partial eclipsed Moon 20 seconds later: 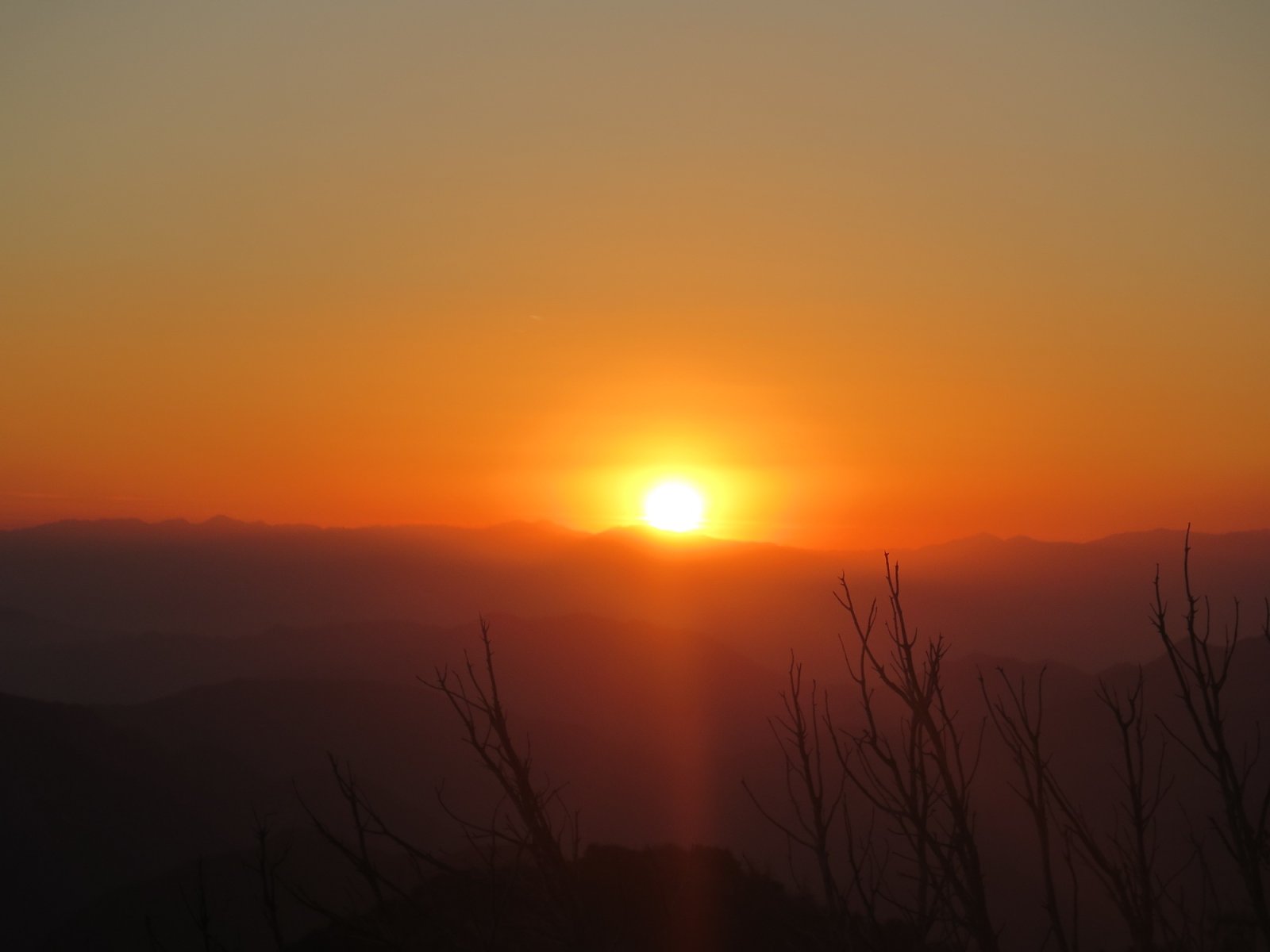 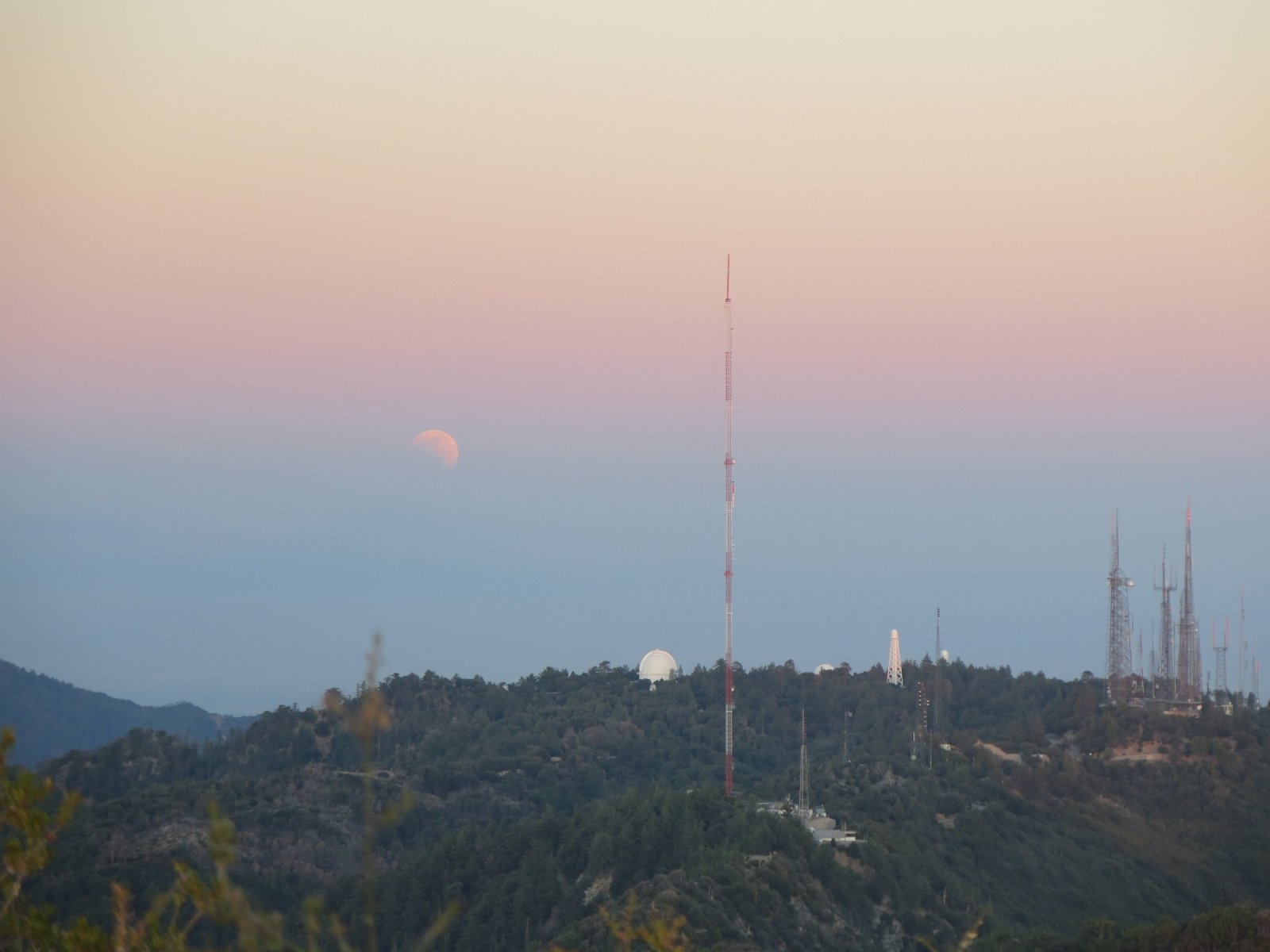 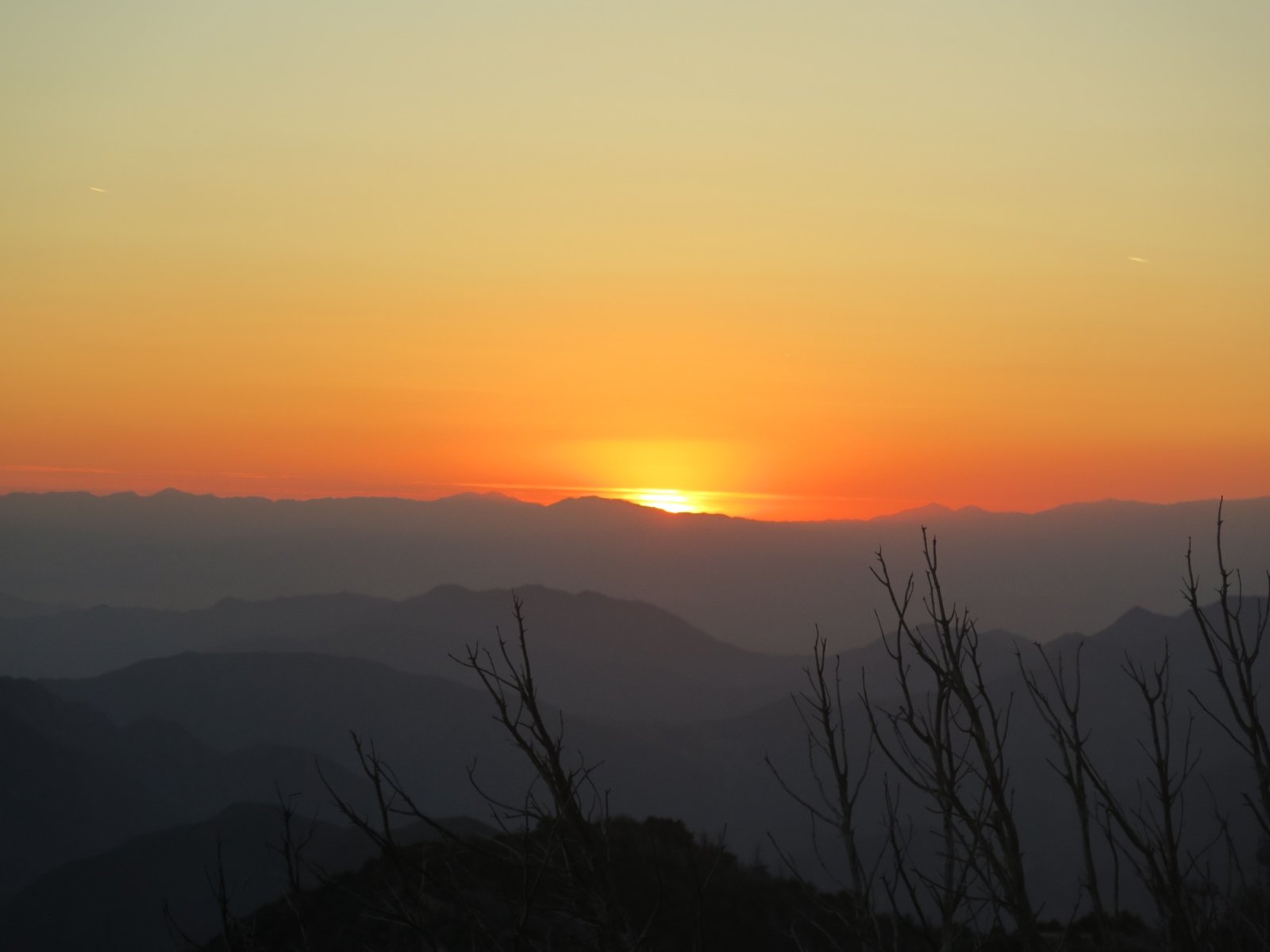 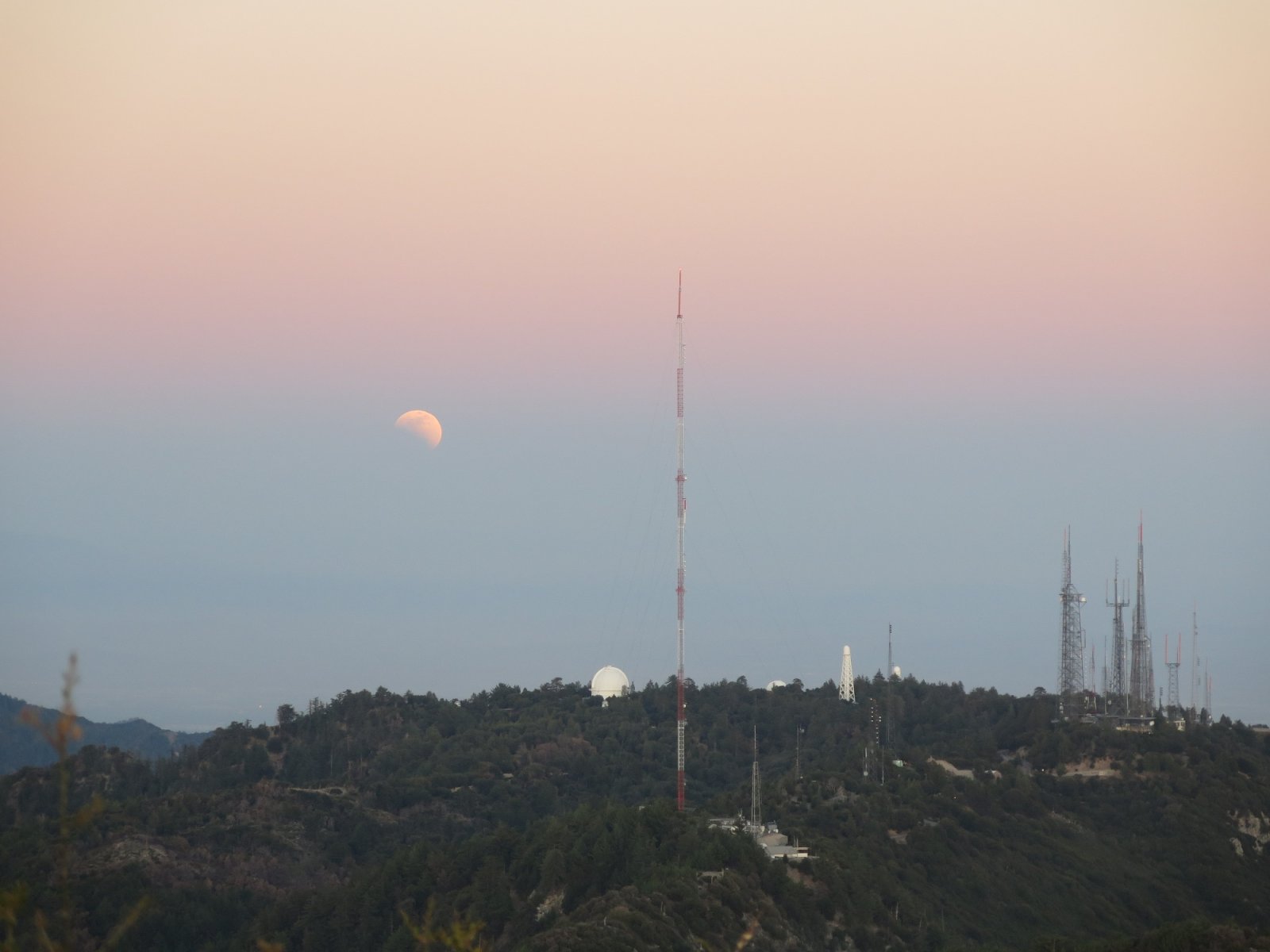 We did not waste any time getting off the mountain soon after sunset, as we didn't want to be on the rougher upper 30 minutes of trail in the dark. We got down to the Mt. Lowe gravel road with this view at 8:25 just before second contact. 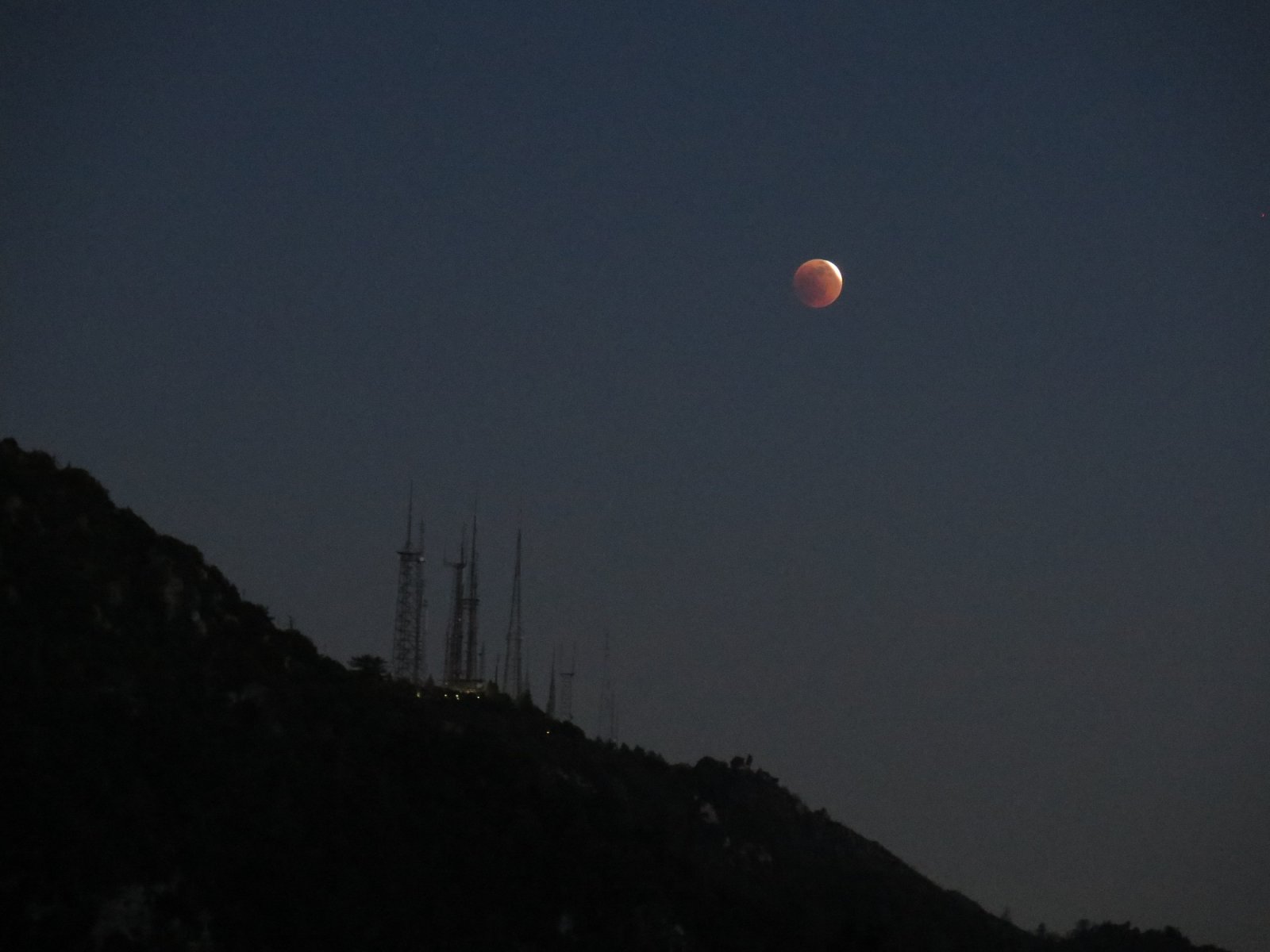 We drove up to the Mt. Wilson parking lot, which was gated shut, then down to Red Box (intersection of Angeles Crest Hwy and Mt. Wilson road), when it was close to mid-totality. 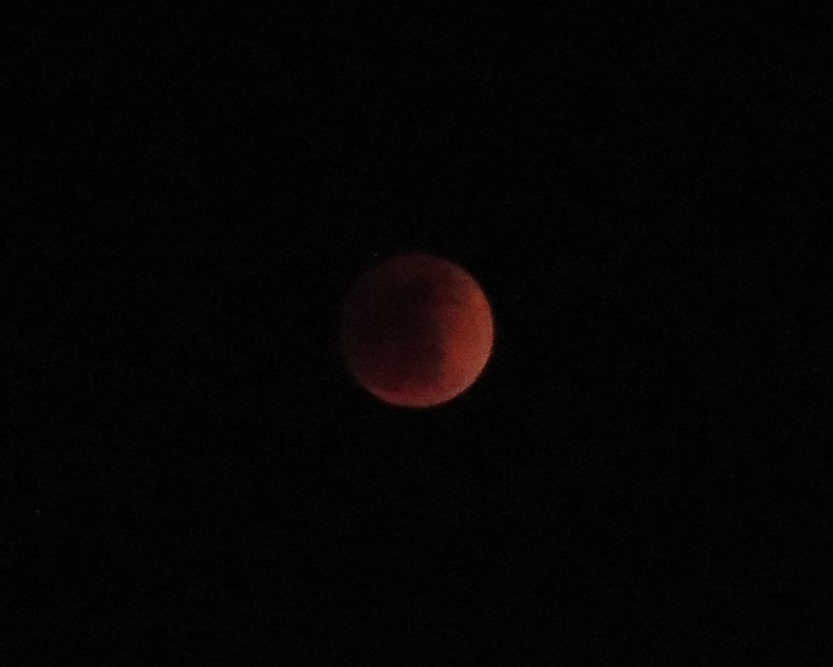 There is a star very close to the top of the Moon.

We drove down the Angeles Crest and stopped briefly off Harvey Dr. for third contact. 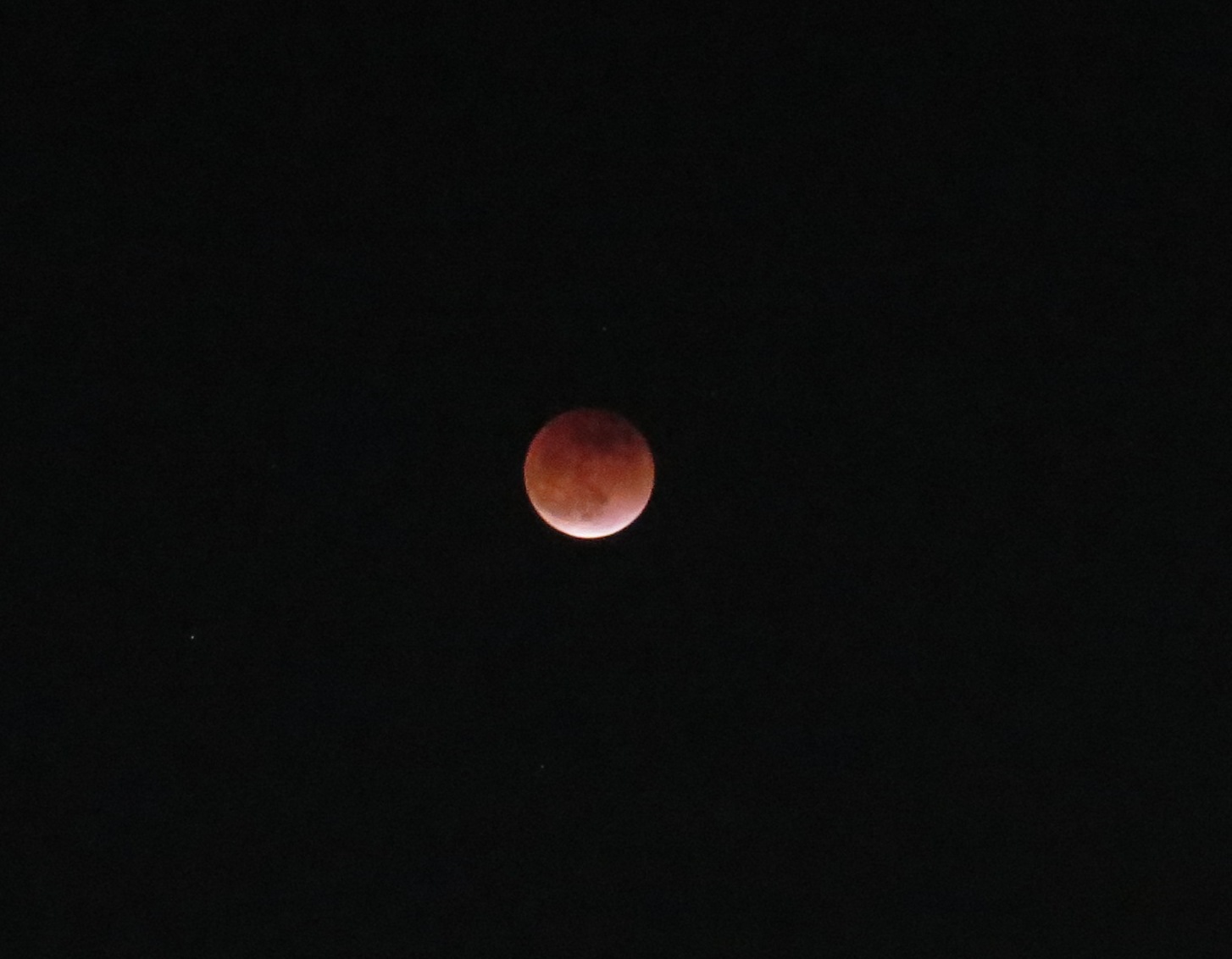 We were pleasantly surprised this worked so well. The selenelion lasted as long (9 minutes) and the skies were somewhat clearer than in 2015. San Gabriel Peak would not have worked well in 2015 because in September the Moon would rise due east in the direction of Mt. Baldy 25 miles away while in May it rose 23 degrees south of east over the San Gabriel Valley with no high mountain in that direction until San Jacinto 85 miles distant. In the sunset direction Mt. Pinos is 75 miles away.

To the naked eye this was one of the darkest lunar eclipses, more gray than red.
Last edited: May 16, 2022

I watched the last ~10 minutes to 2nd contact from my front stoop. I would agree that it was a very dark version of a typical lunar eclipse. But the good news was that it hit 2nd contact at only ~9:30p local time for me. The next Lunar eclipse (in Nov) and the vast majority of them seem to have totality beginning in the wee hours of the morning (like 3am type stuff). So I liked that I didn't even have to go to bed late or anything for this one.

I would never wake up to watch one in the wee hours of the night; they are fairly common and nothing spectacular at all compared to a total solar eclipse.

Speaking of which, Tony have you set your plan for the 2024 total eclipse yet? I'm thinking of flying to San Antonio and then drive an hour west (or something like that).

Staff member
We would usually get up in the middle of the night for a lunar eclipse, but we certainly wouldn't leave home and would just go back to bed if it was cloudy. On May 26, 2021 Liz was in Florida and the eclipse became total about half an hour after sunrise. She went to the beach just before sunrise and saw nothing. I called her but it was cloudy here and I saw only a sliver of the partial for a couple of minutes.

The selenelion possibility is really the only scenario where I would make an effort for a particular viewing location. The next possibility is June 29, 2029. That eclipse is about 50 minutes earlier than last night's, which means that it will already be total at moonrise and thus may not be bright enough at low angle to be visible before sunset in the Pacific time zone. The timing in the Mountain time zone will be good, but finding a location with a clear view west to the sunset will take some investigation. Pikes Peak would probably give you about 15 minutes of selenelion in clear skies.

After two of these expeditions I can say that the horizon view west to sunset is the more important one as the sun is strong enough to shine through light haze even on the horizon. The partially eclipsed full moon is not so bright and was thus first seen about 2 degrees above the eastern horizon. and was about 4 degrees high at sunset.

It's still a challenge to find a location at altitude with unobstructed views to both moonrise and sunset. Crudely, the 9 minutes of both sun and moon visible are explained by our 6,100 foot altitude extending both east and west views by 4 minutes with one extra minute from atmospheric refraction of the sunset.

Our likely plan for TSE2024 is Mazatlan. Ideally we would have a rental car and drive the toll road toward Durango, and view from the high point about 8,800 feet. One of our Snowbird timesharers is a member of a vacation club that can get reservations at 4 beachfront hotels in Mazatlan. Mazatlan's weather prospects are better than anywhere in the US though not quite as good as some interior Mexican locations. But within the US the locations accessible from San Antonio and Austin have the best track records.
Last edited: May 17, 2022

I took the following at 8:17 from Levi's Stadium in Santa Clara, where I was working Coldplay with H.E.R and a rapper opening. It was my first paid job in 2022 and the first concert at Levi's in almost three years. 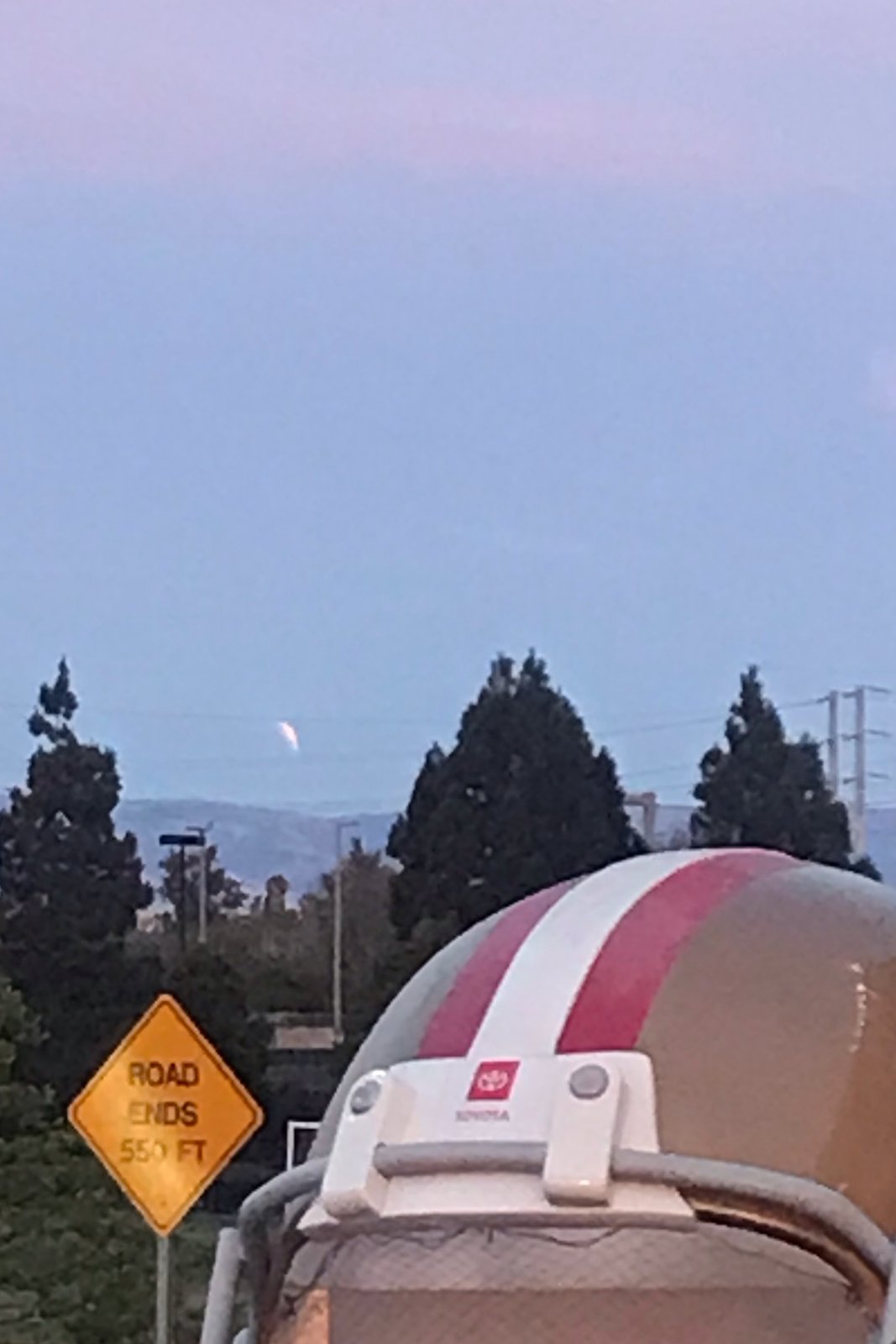 The mountains in the picture rise to over 3000' more than 10 miles away. The highest peak in area is Mt. Hamilton 4,260', where Lick observatory, the world's first permanently occupied mountain-top observatory where the 5th, 6th and 7th moons of Jupiter, the first ones since Galileo, were discovered. It would probably be a good place to watch Selenelion. My wife was at home where 2500' peak is two miles E/SE and could not see the moon until more than 10 minutes later. During the concert the moon was very dark over the stadium. When I was on the W side outside stadium early when eclipse was full, I walked further to the S than necessary before realizing moon was visible, only much dimmer than expected.

If I'm not in Mazatlan for 2024 solar eclipse, I would probably be near Fredericksburg, TX, which is W of Austin (where brother-law-law lives) in Texas' Hill and Wine Country.

I was driving across the US when this lunar eclipse took place. My wife and I had taken a 9PM swim in an outdoor motel pool in Knoxville, TN (it had been 90 degs that day). We noticed the beautiful full moon. Around 1030PM I'm in bed looking at my phone and see an article talking about the eclipse to occur that night! I quickly look out the motel window and the moon is in almost total eclipse. Cool surprise.
Last edited: May 18, 2022
You must log in or register to reply here.
Share:
Facebook Twitter Reddit Pinterest Tumblr WhatsApp Email Share Link
Top