Staff member
On our way home from Australia we went to Vanuatu to scuba dive the President Coolidge. Vanuatu is west of Fiji in the time zone between New Zealand and east coast Australia. Espiritu Santo was the largest American base in the South Pacific during WWII but it's quite low key and remote now. Most tourists are Aussies, less than 1% are American and from Darwin it took us three flights and 19 hours to get there.

There are dive pictures in the link above. We did not get any as our GoPro flooded again. All of our dives were at least 100 feet and The Lady is at 130 feet. Dives we did not do toward the stern of the ship are deeper still. We had three days of diving and the mandatory no-dive day when we hiked to Millennium Cave before leaving Santo.

Almost all international flights come into Vanuatu's capital Port Vila, where we had a 5 hour layover on the way in. On the way out we needed to stay overnight and nearly all of the next day before catching our Air Fiji flights home. We arranged the flight logistics last fall and our Australia cars and lodging in April. We had not made any arrangement for Vanuatu when we were fortunate to find a booth for Vanuatu Tourism at the Long Beach Scuba Show in early May. On their recommendation we stayed at the Aore Island Resort and dived with Aore Island Adventures, both of which we recommend highly.

So finally we wondered what to do on our day in Port Vila and in the Vanuatu Tourism brochure we soon found out about this. 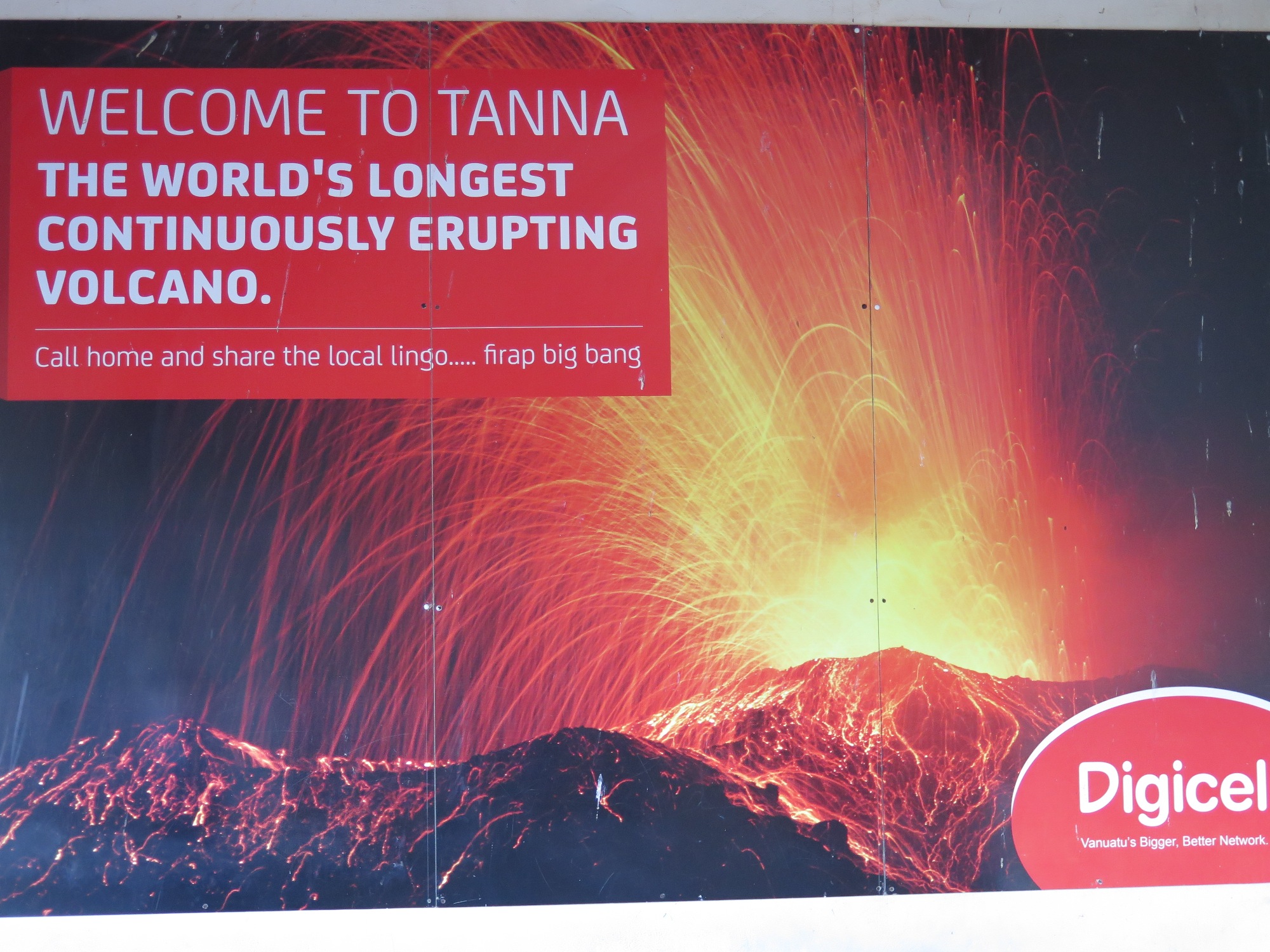 Tanna Island is nearly as far south of Port Vila as Espiritu Santo is north, but two companies offer daytrips to Tanna. We signed up with Air Taxi Vanuatu, which would return us to the Port Vila airport just over an hour before our flight connection home. After takeoff we got a bird's eye view of Port Vila and its harbor. 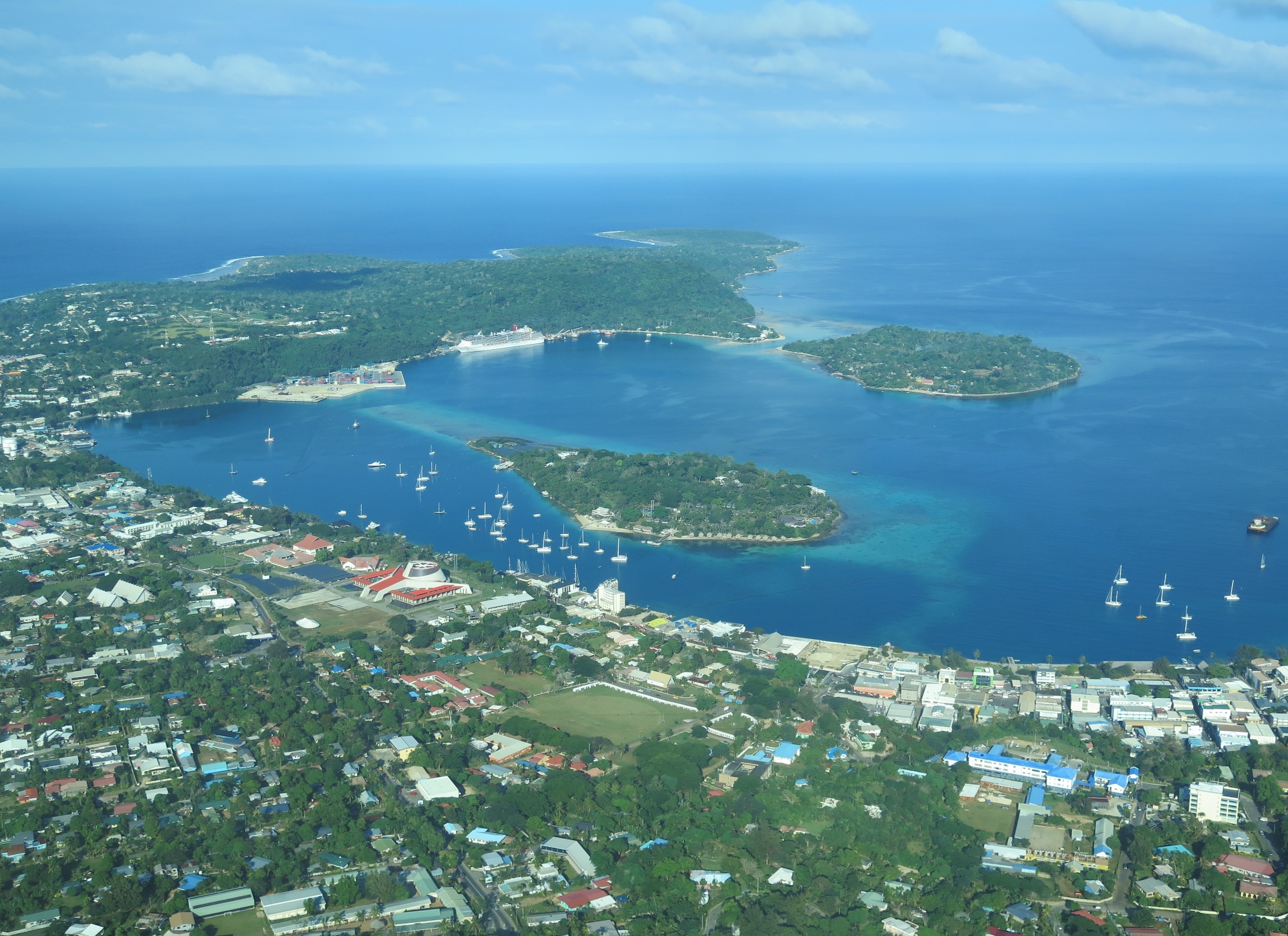 On the way to Tanna we saw for the first time an airplane glory projected on a cloud below. 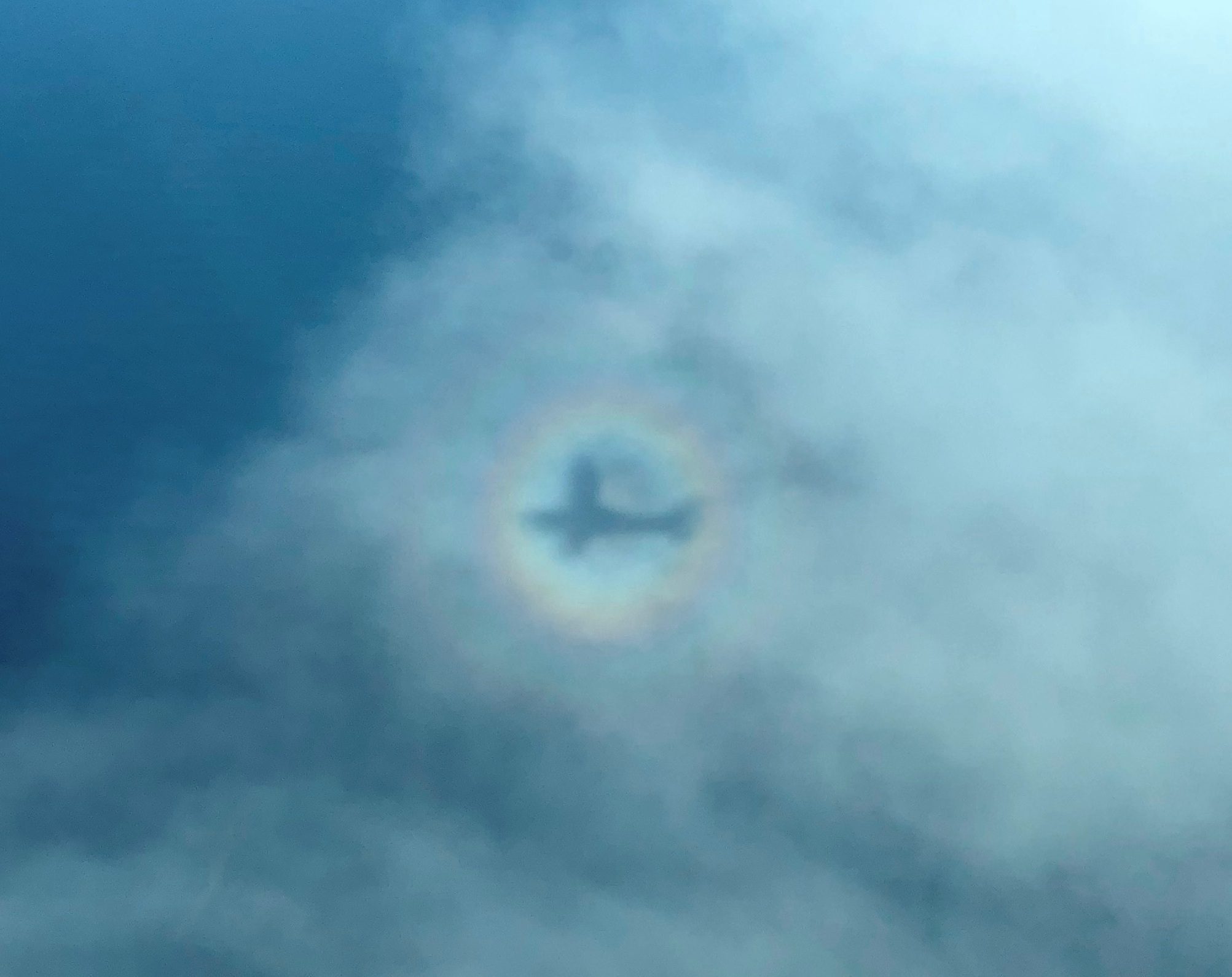 At last we fly directly over the Yasur volcano on Tanna. 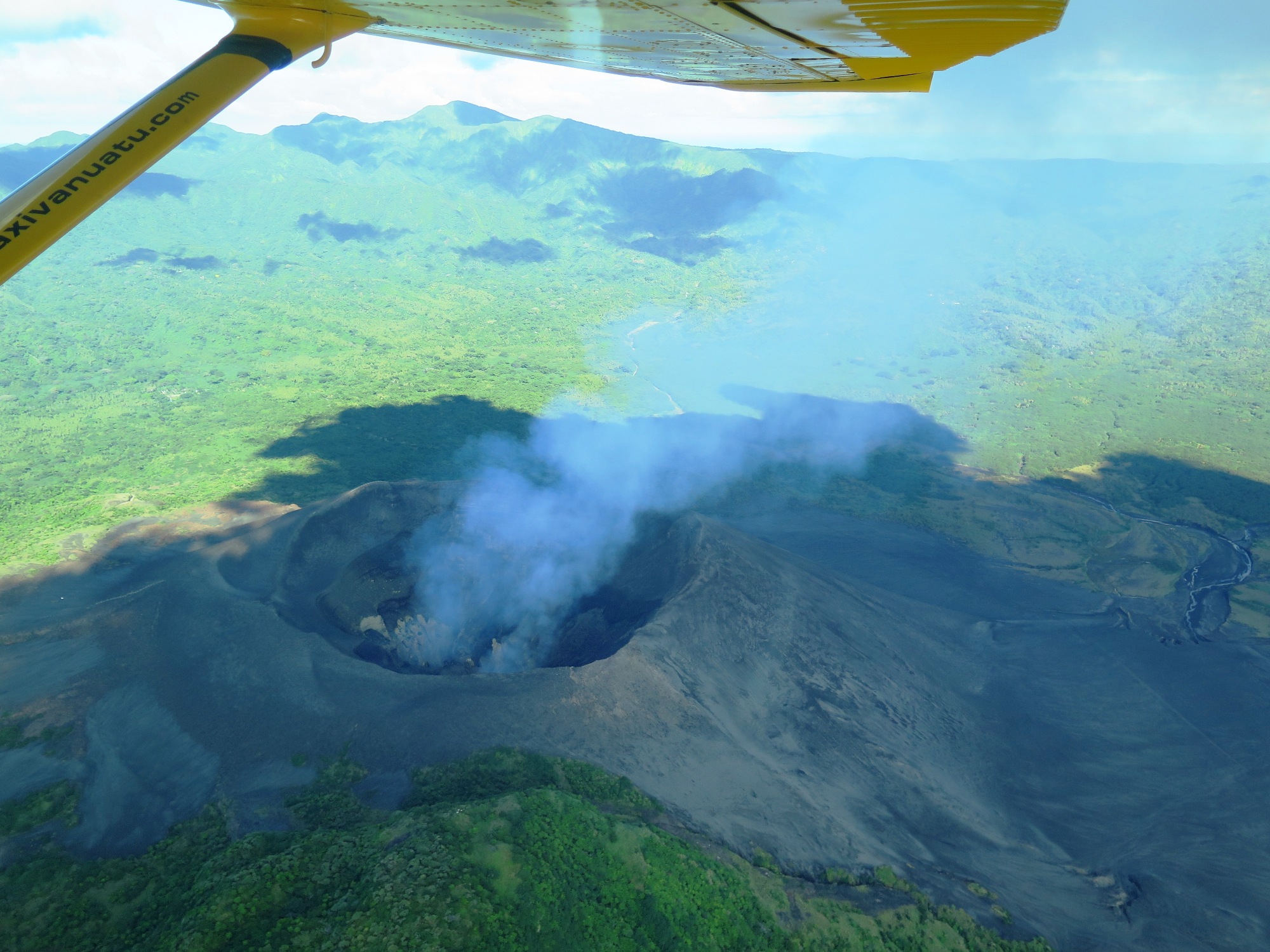 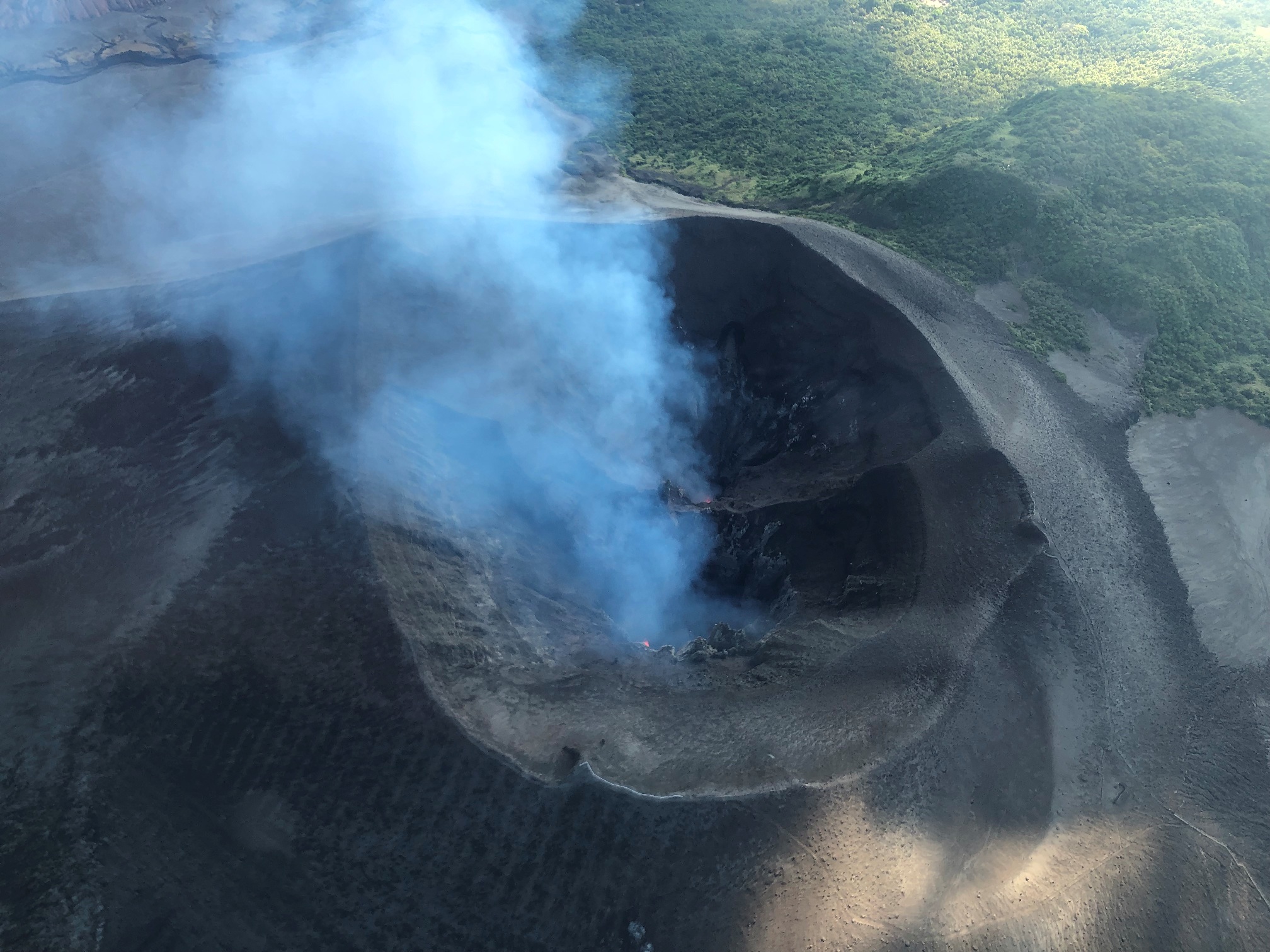 The walking trail to the rim is visible coming from the lower right corner of the second picture above.

The pilot made passes for both sides of our plans. My side got a good view of glowing lava. 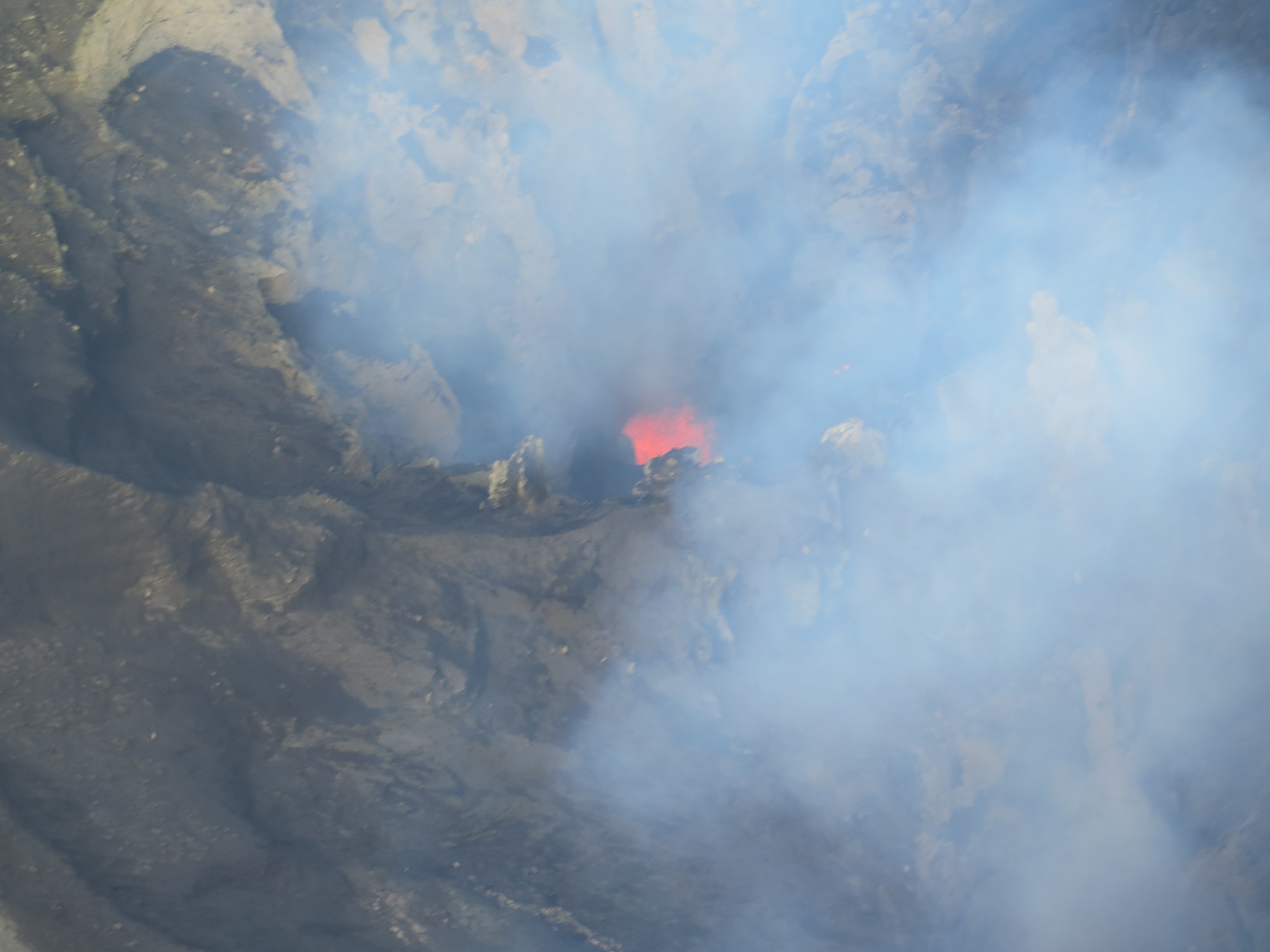 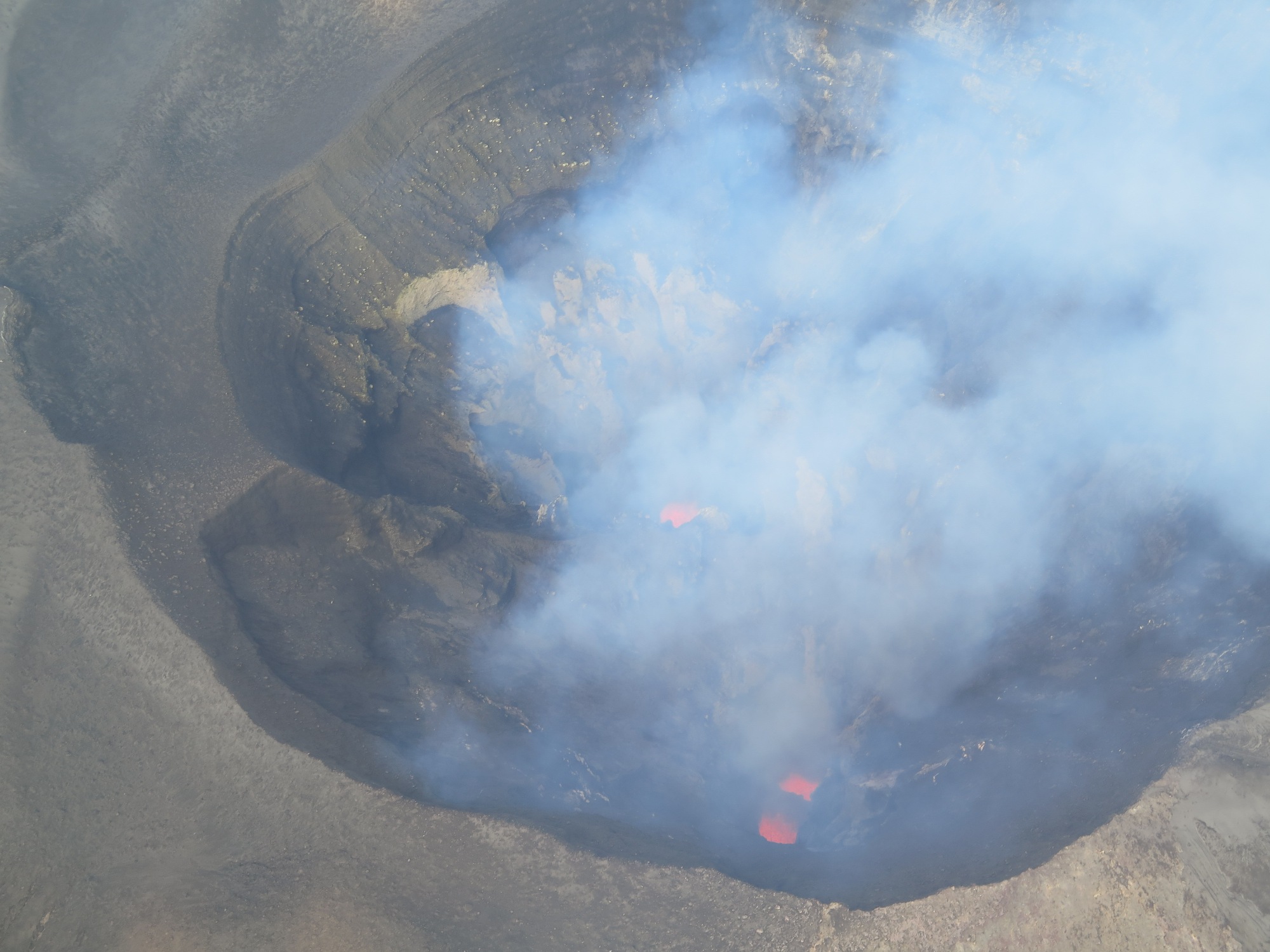 We landed at the airport on the west side of Tanna. 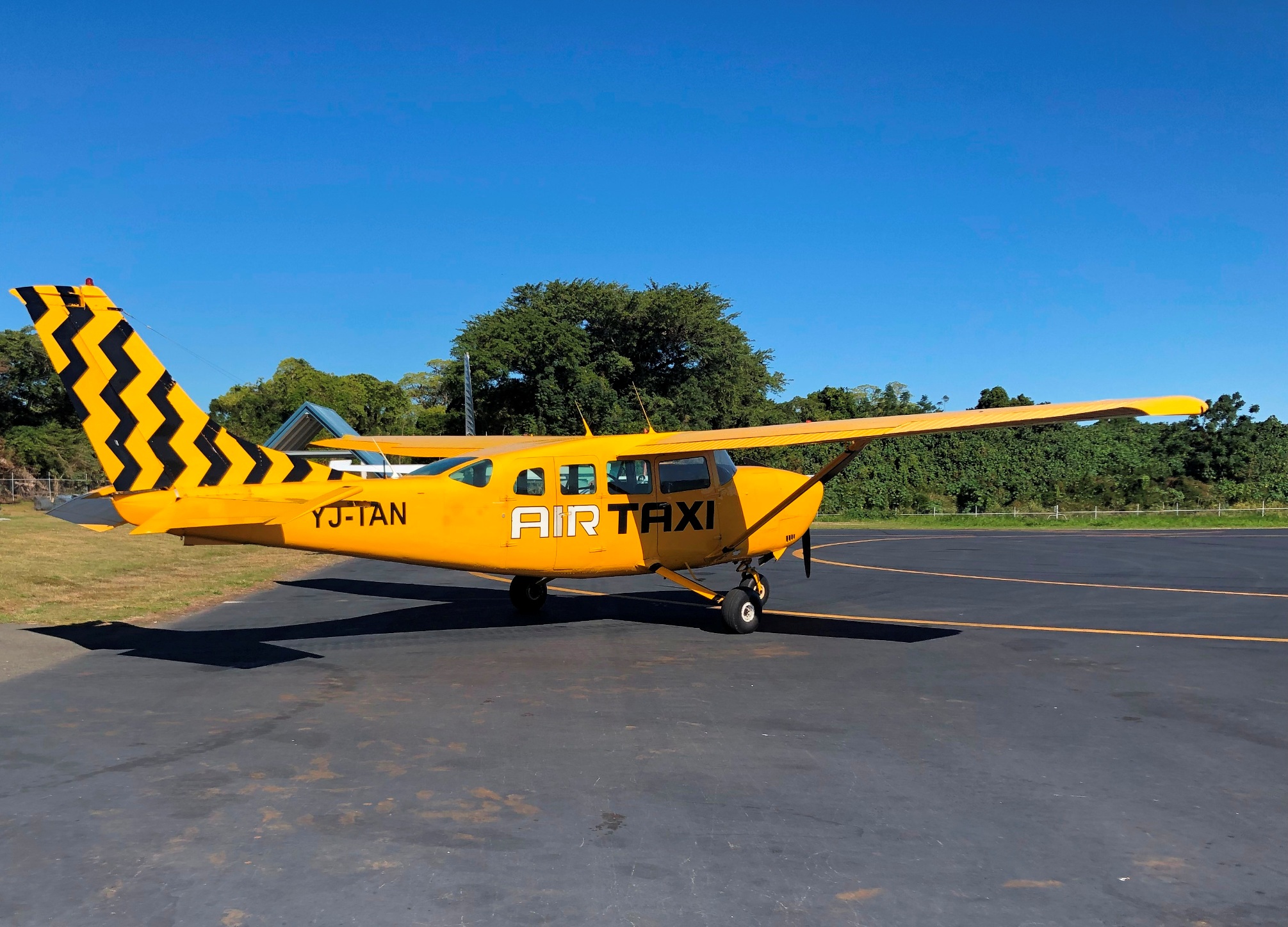 Then we got into the back of a pickup truck to drive across the island to the volcano. Here's the view from the high point of the road. 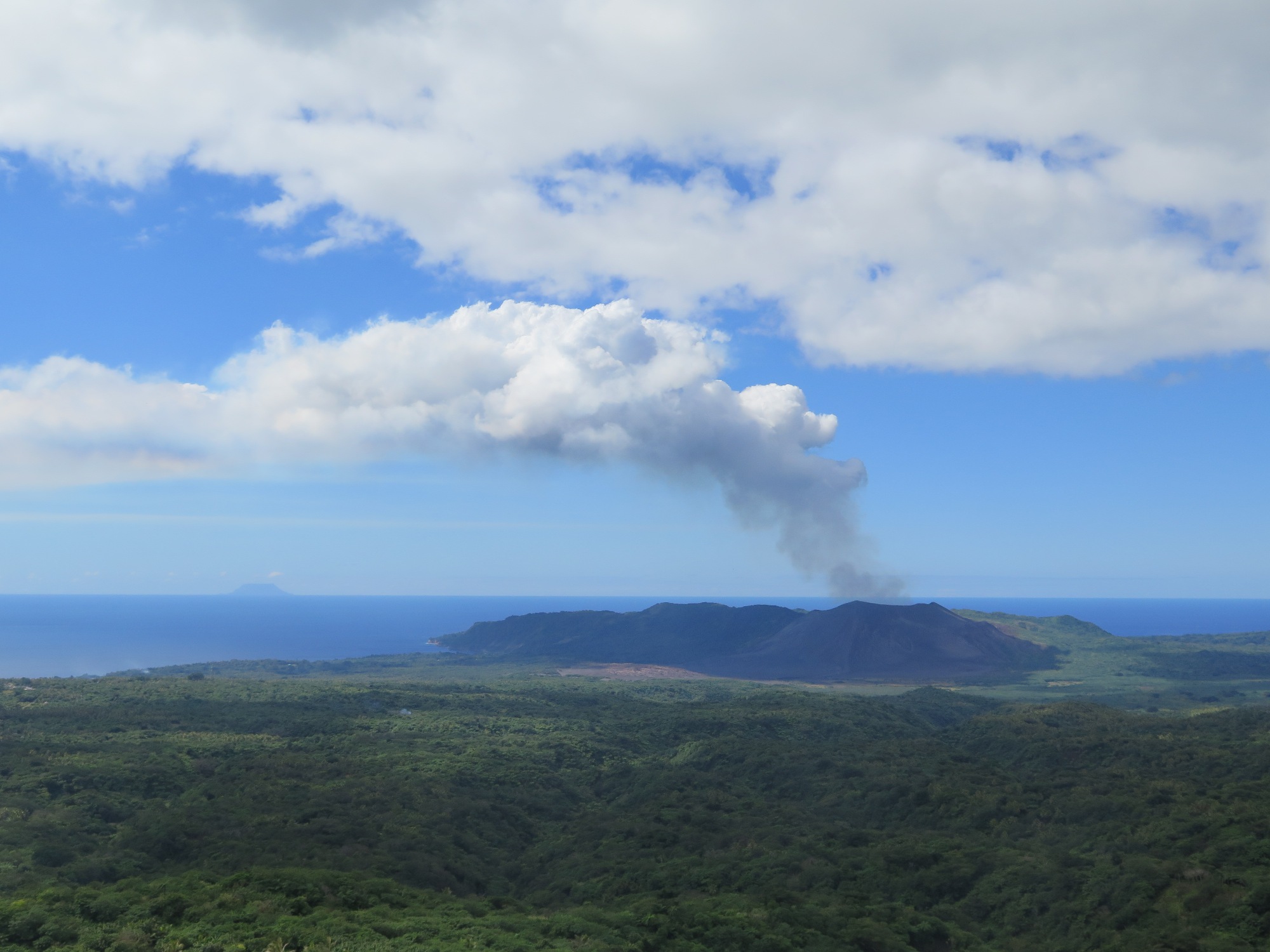 Here we are driving across an ash field on the SW side of the volcano. 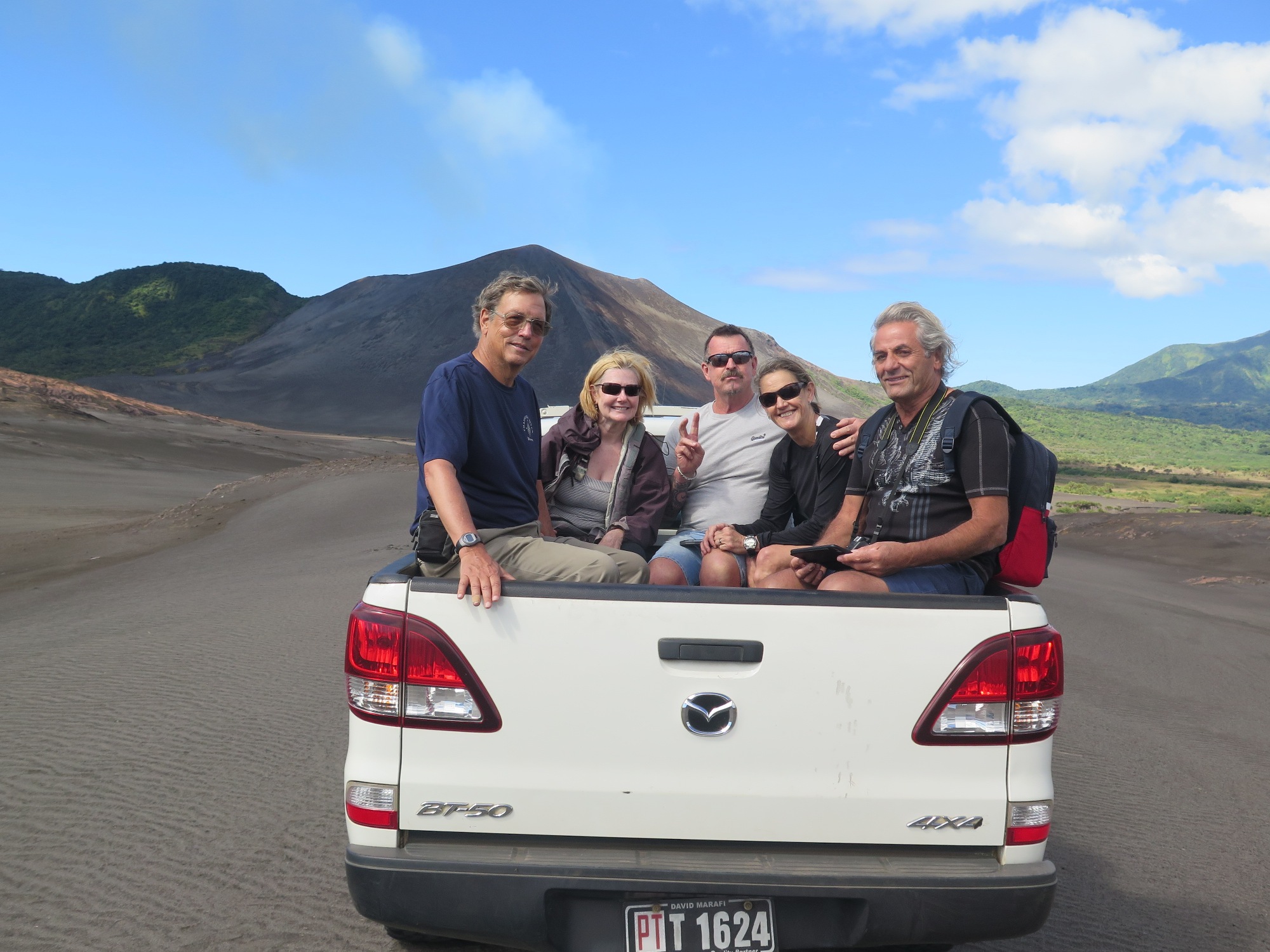 We were with a couple Tony and Beth from New Zealand, and Solomon, who sailed his boat to Vanuatu from Sydney.

More moonscape as we approach the volcano. 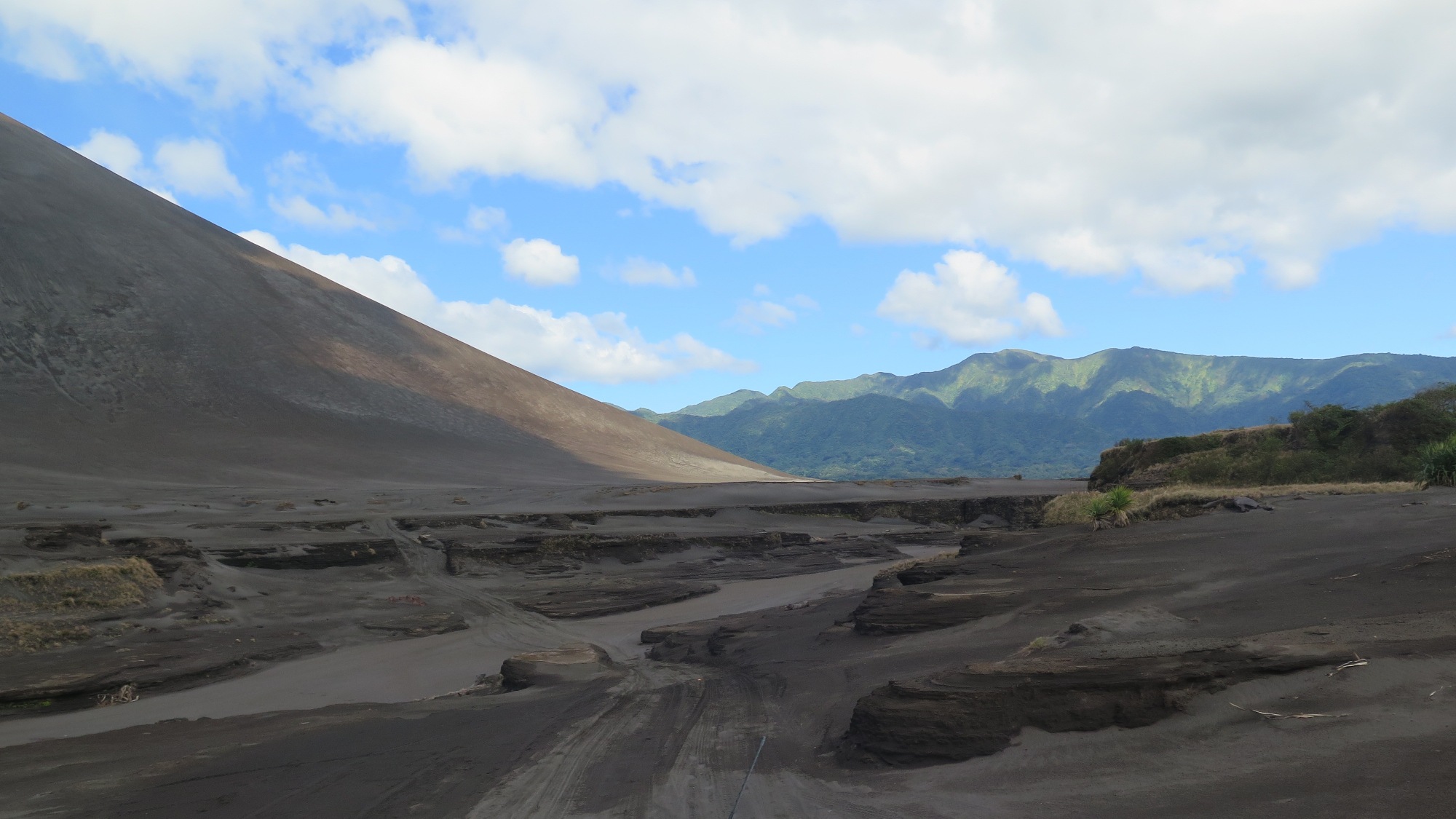 Does that slope from the left look tempting? Yes you can sled or board that if you spend more time here. 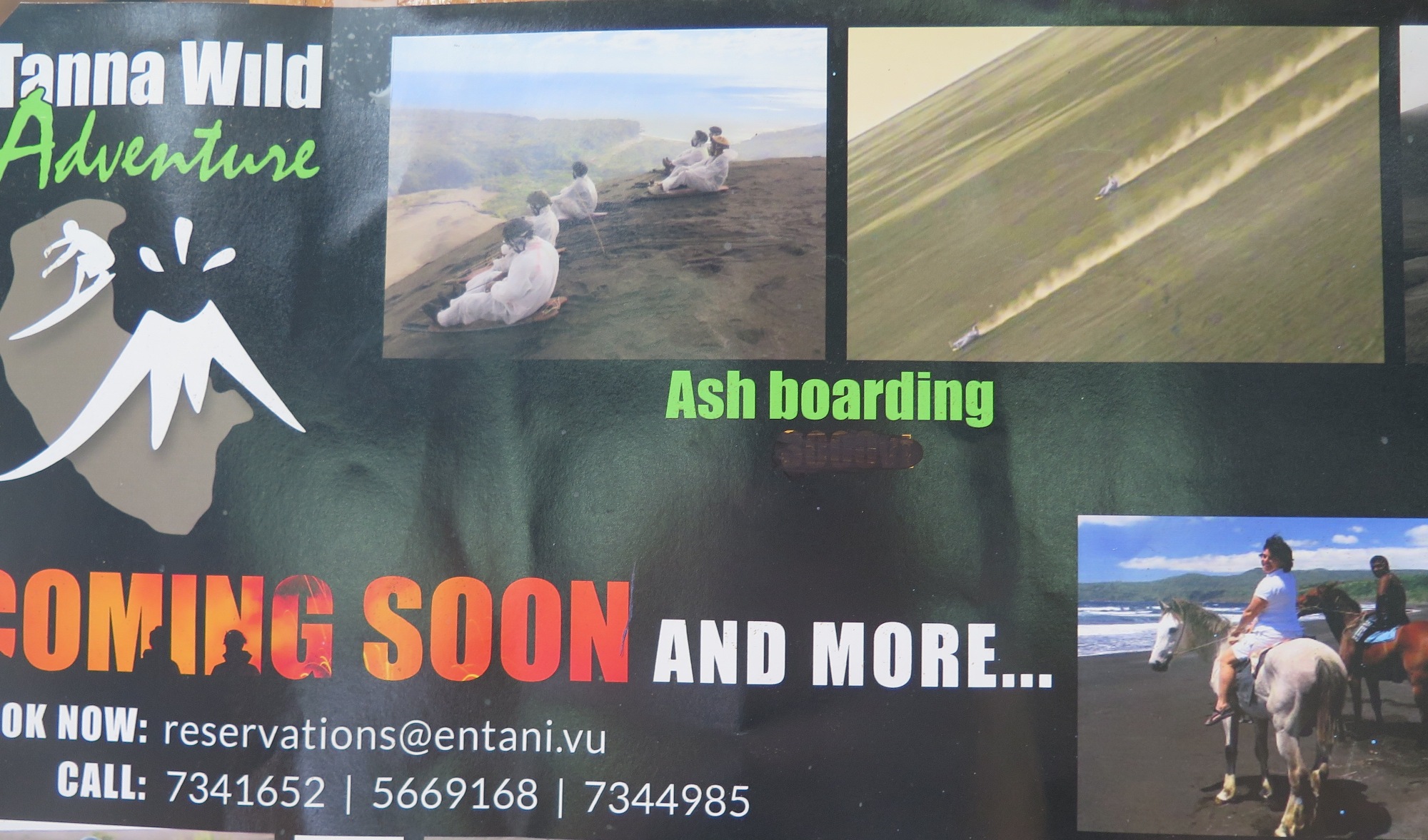 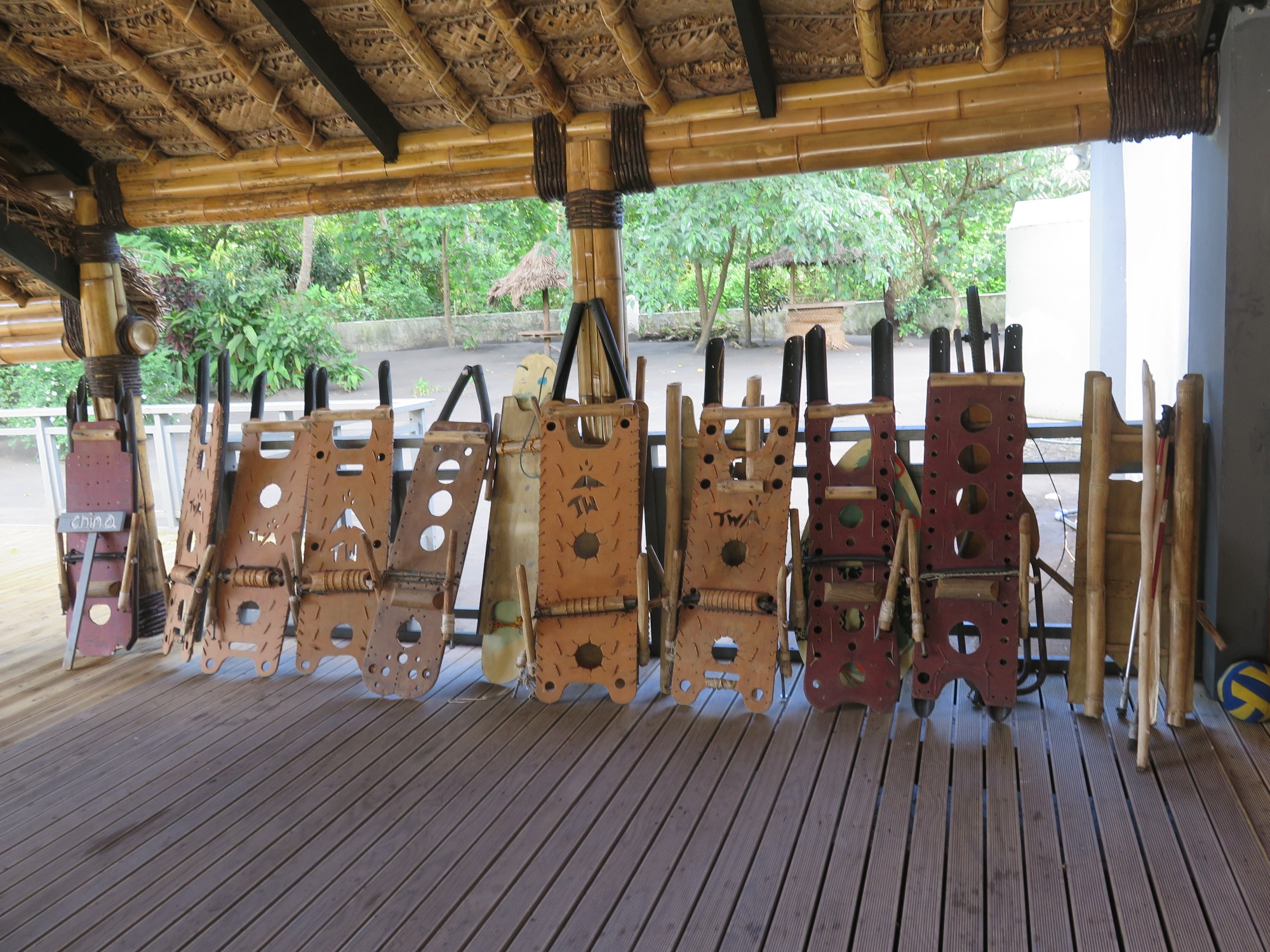 The other attraction of an overnight stay is to be on the rim at sunset for a more obvious red glow out of the caldera.

Banyan tree swing where we stopped for a short break: 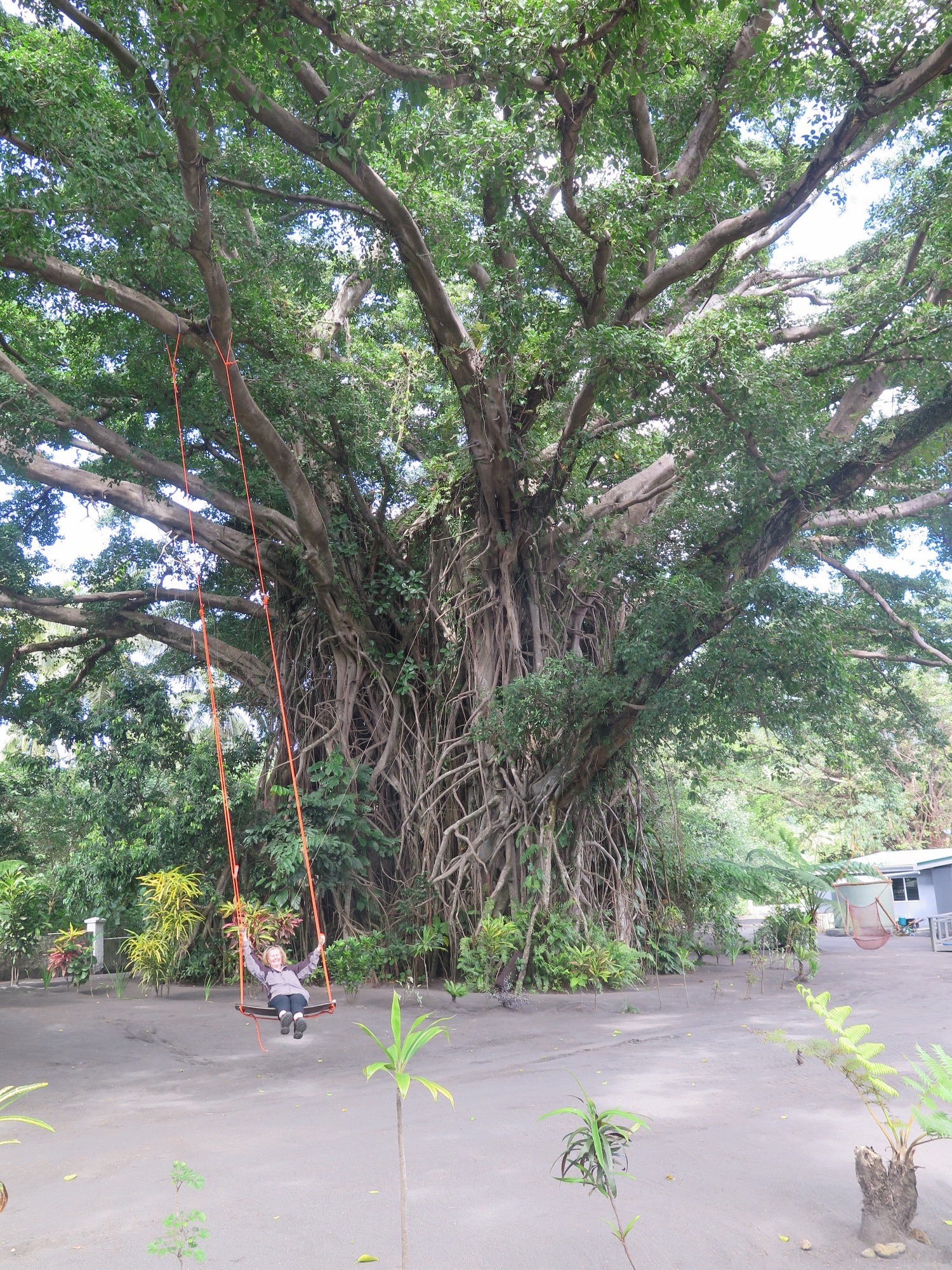 The truck reaches parking quite close, just a 5 minute walk to the rim. 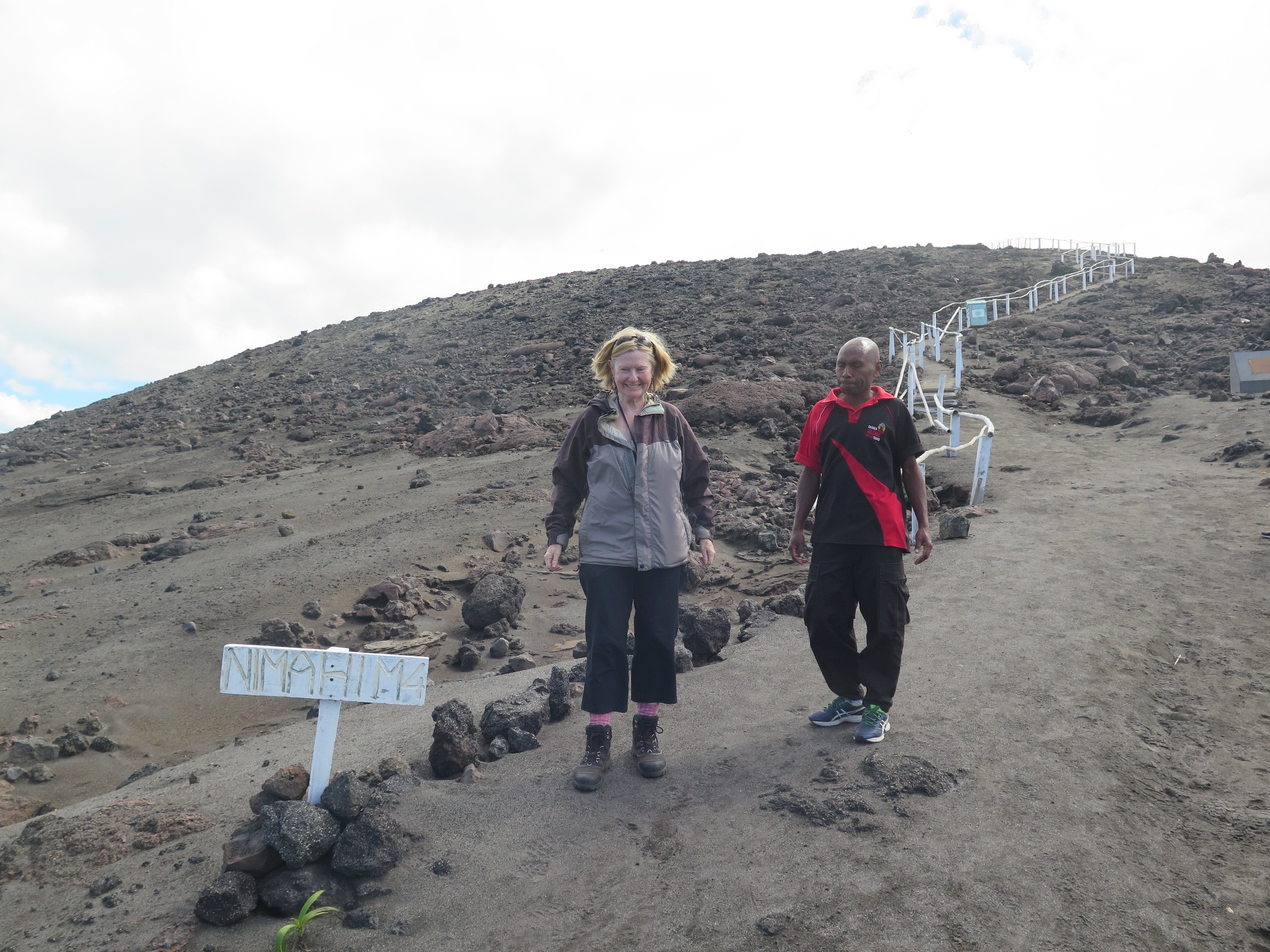 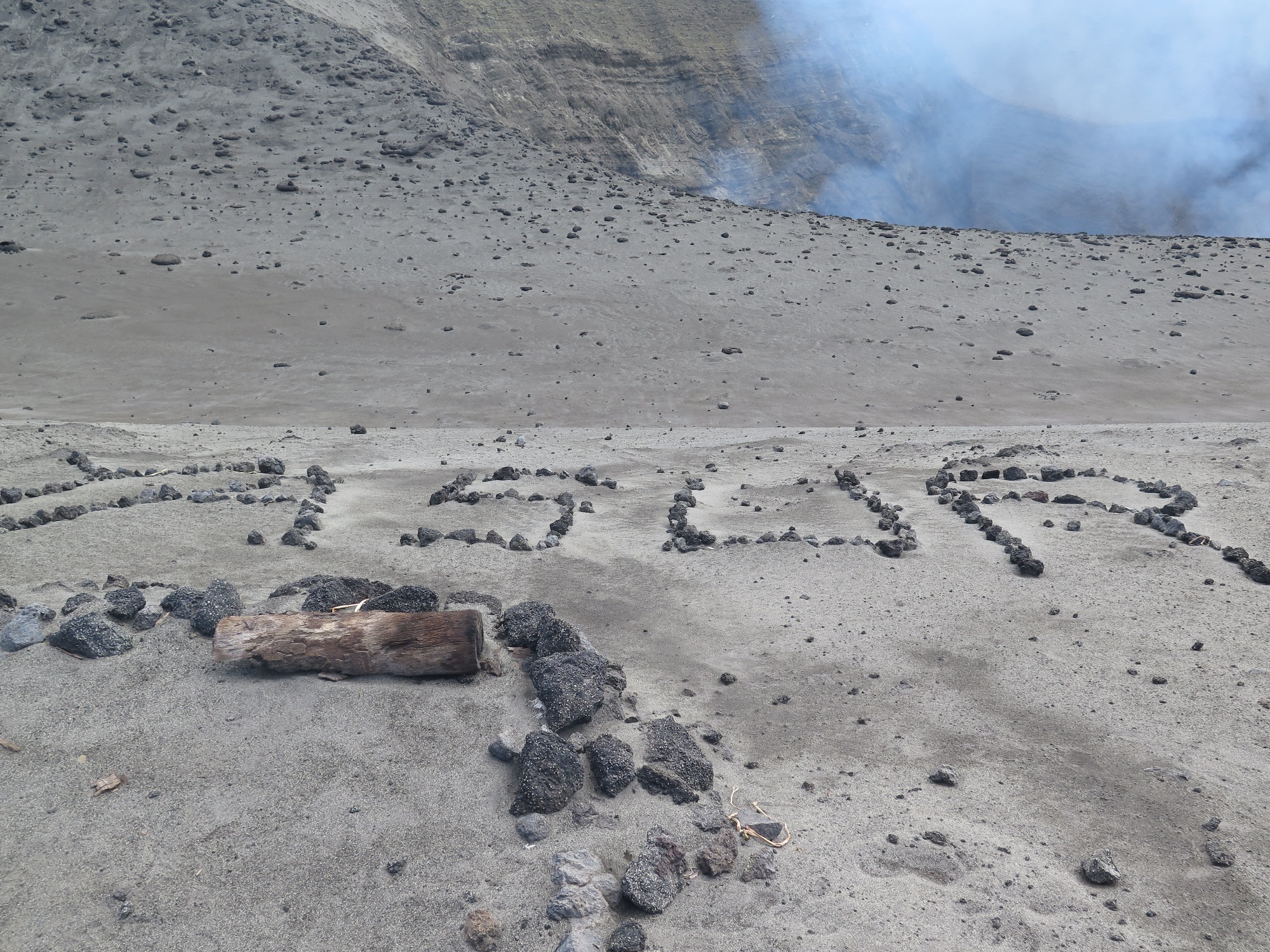 It's bit breezy here, probably a prevailing wind that makes this the safest viewpoint. 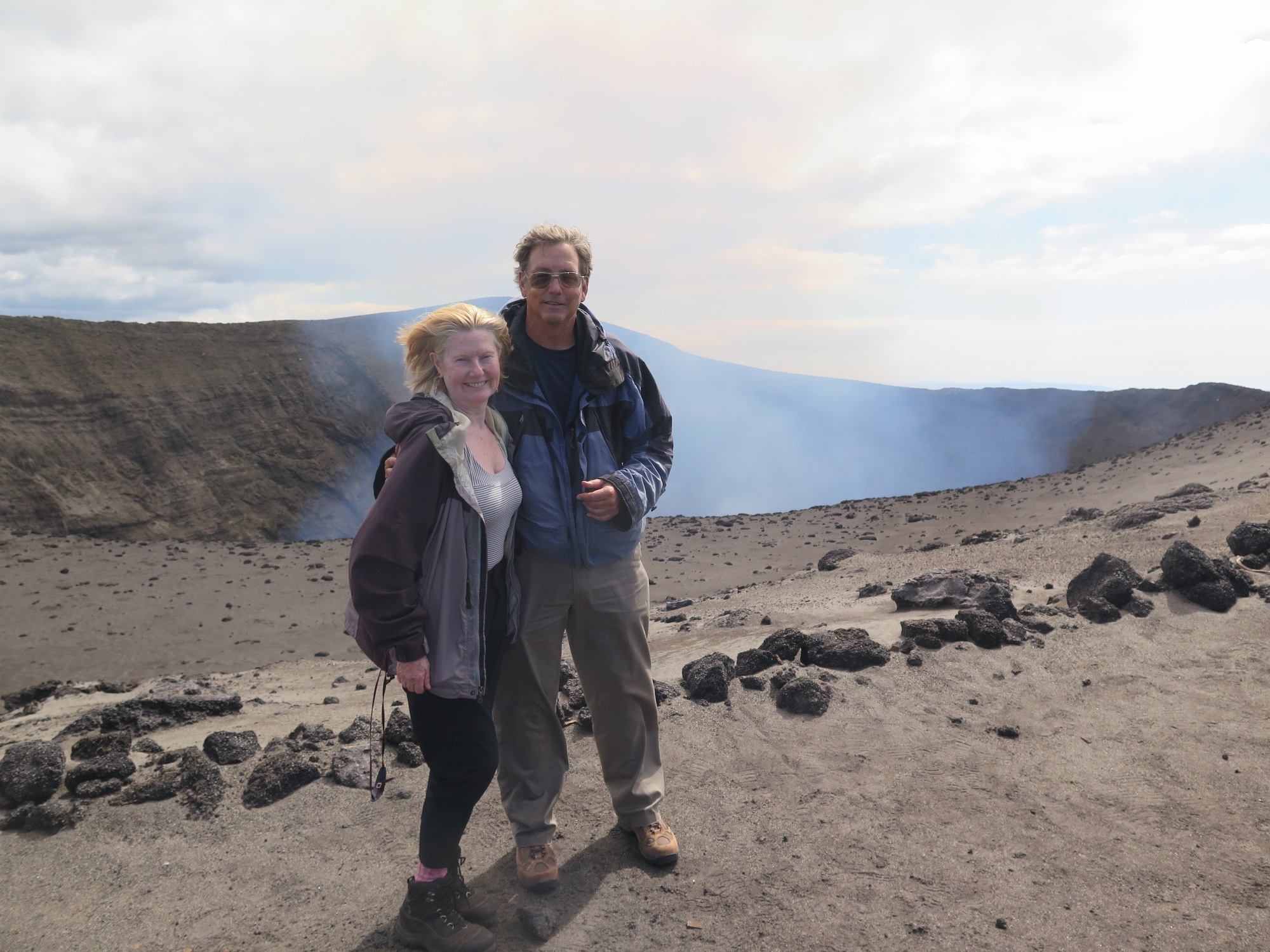 Vegetation comes surprisingly close to the volcano on its east side. 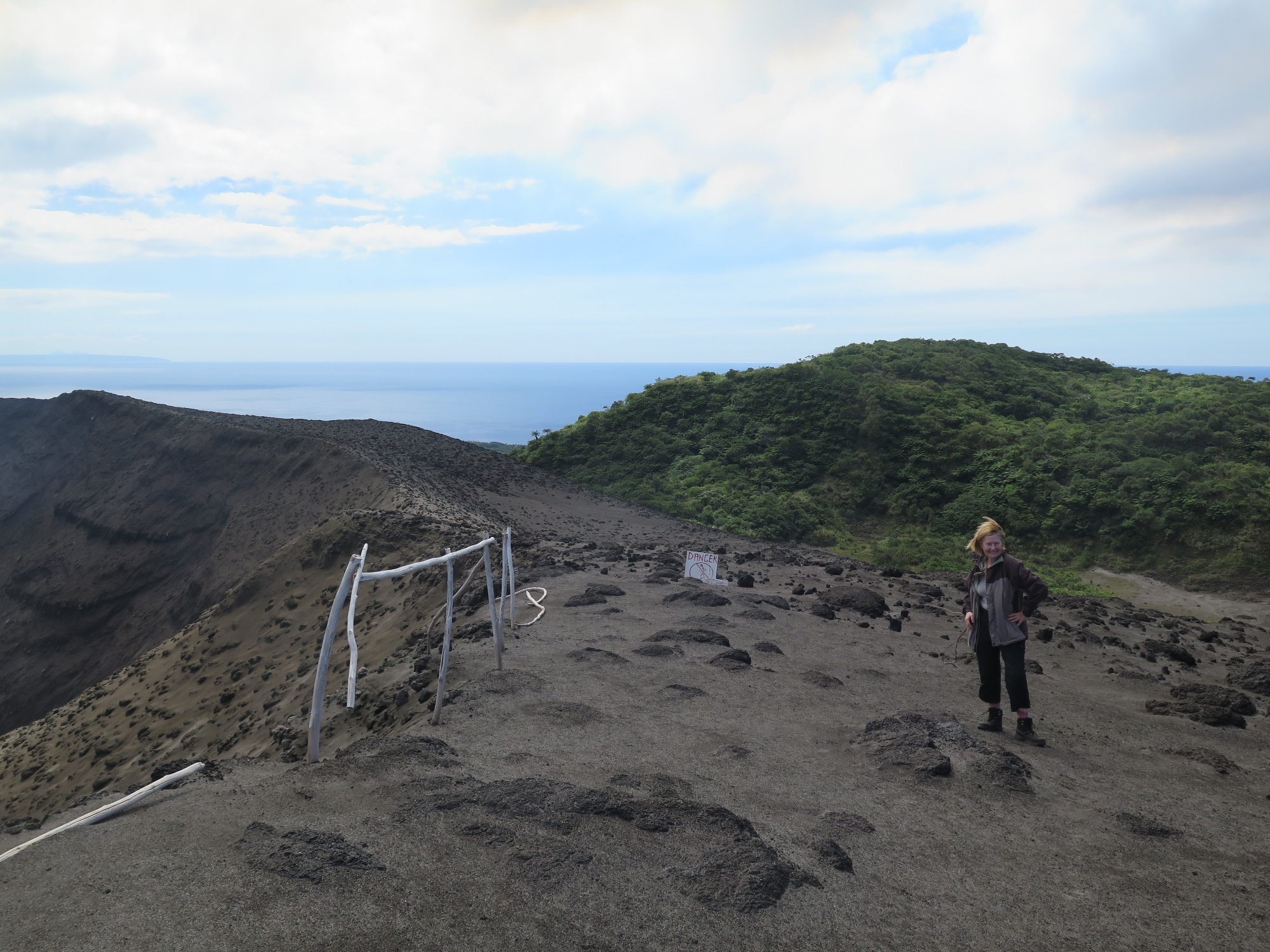 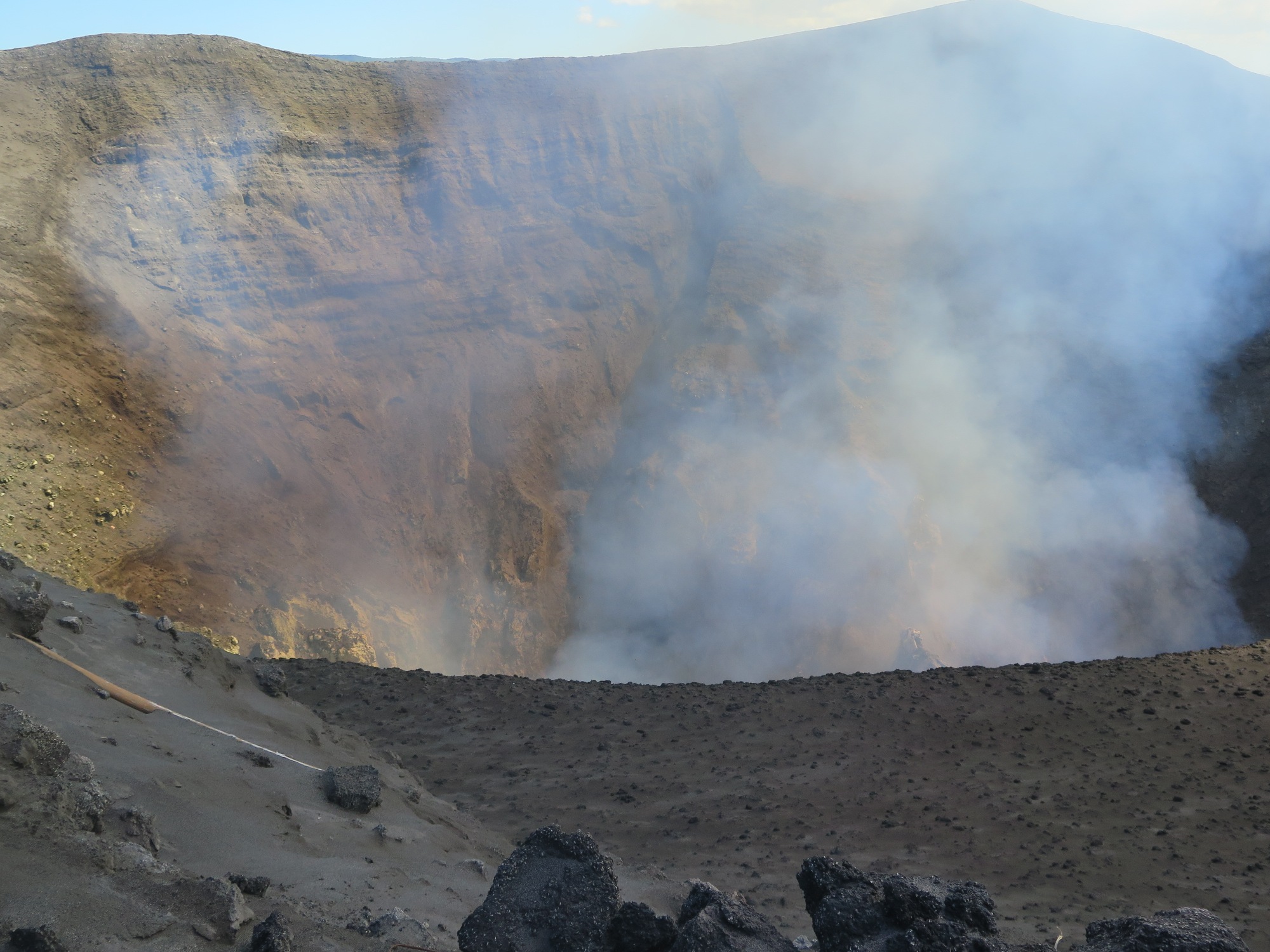 The slightly colored smoke would be a more dramatic glow at sunset.

The rumble and smoke output varies. 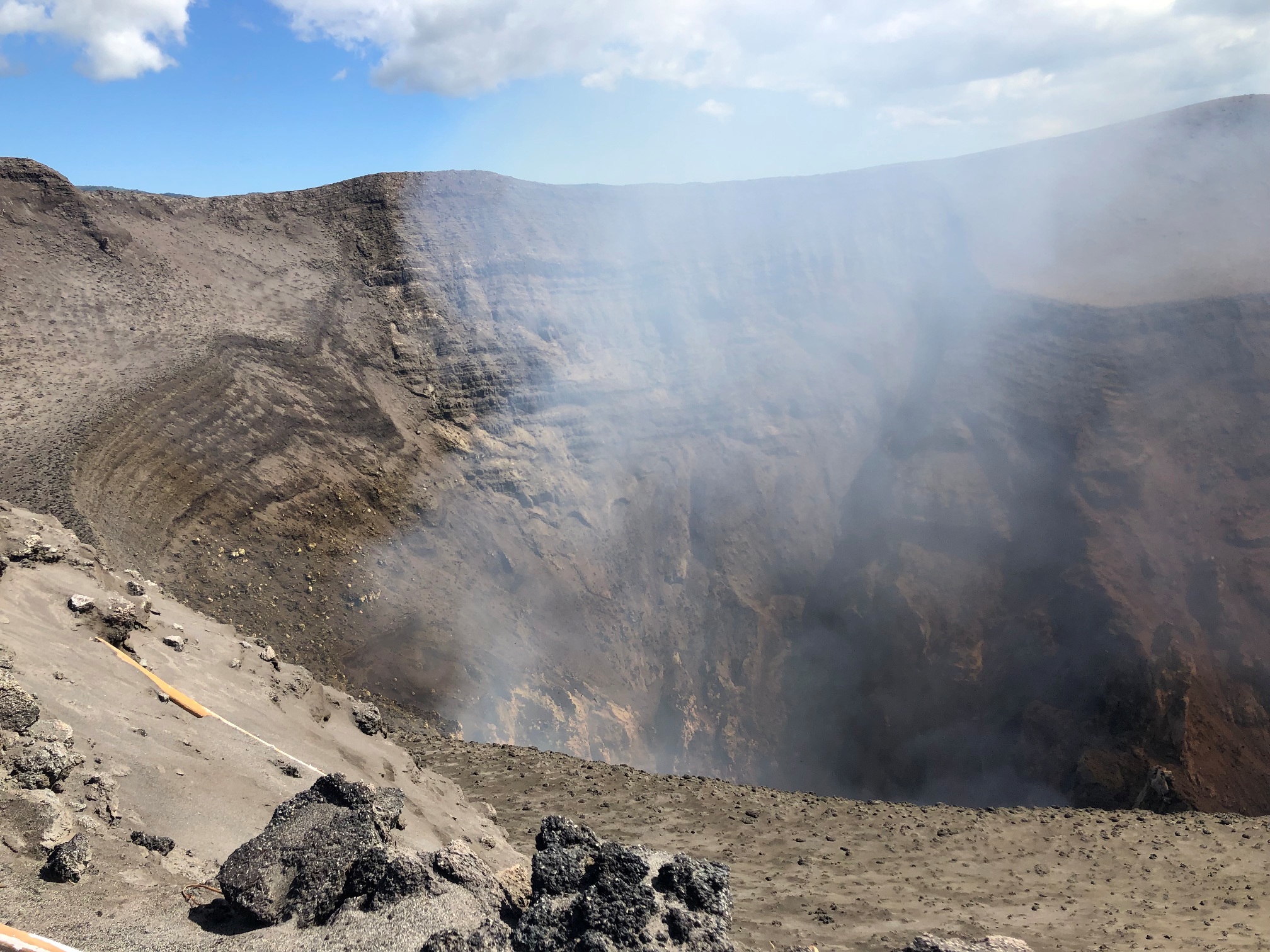 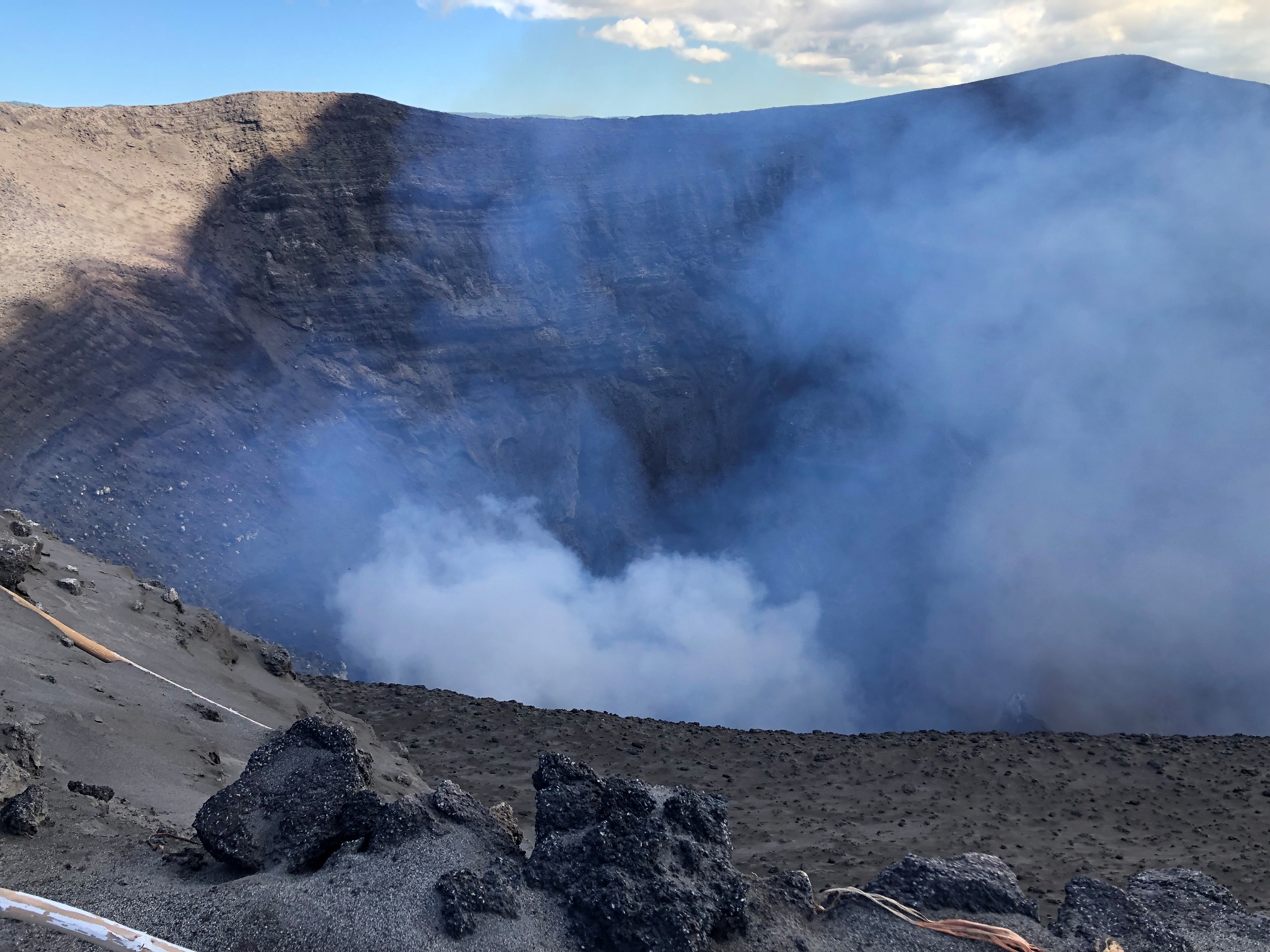 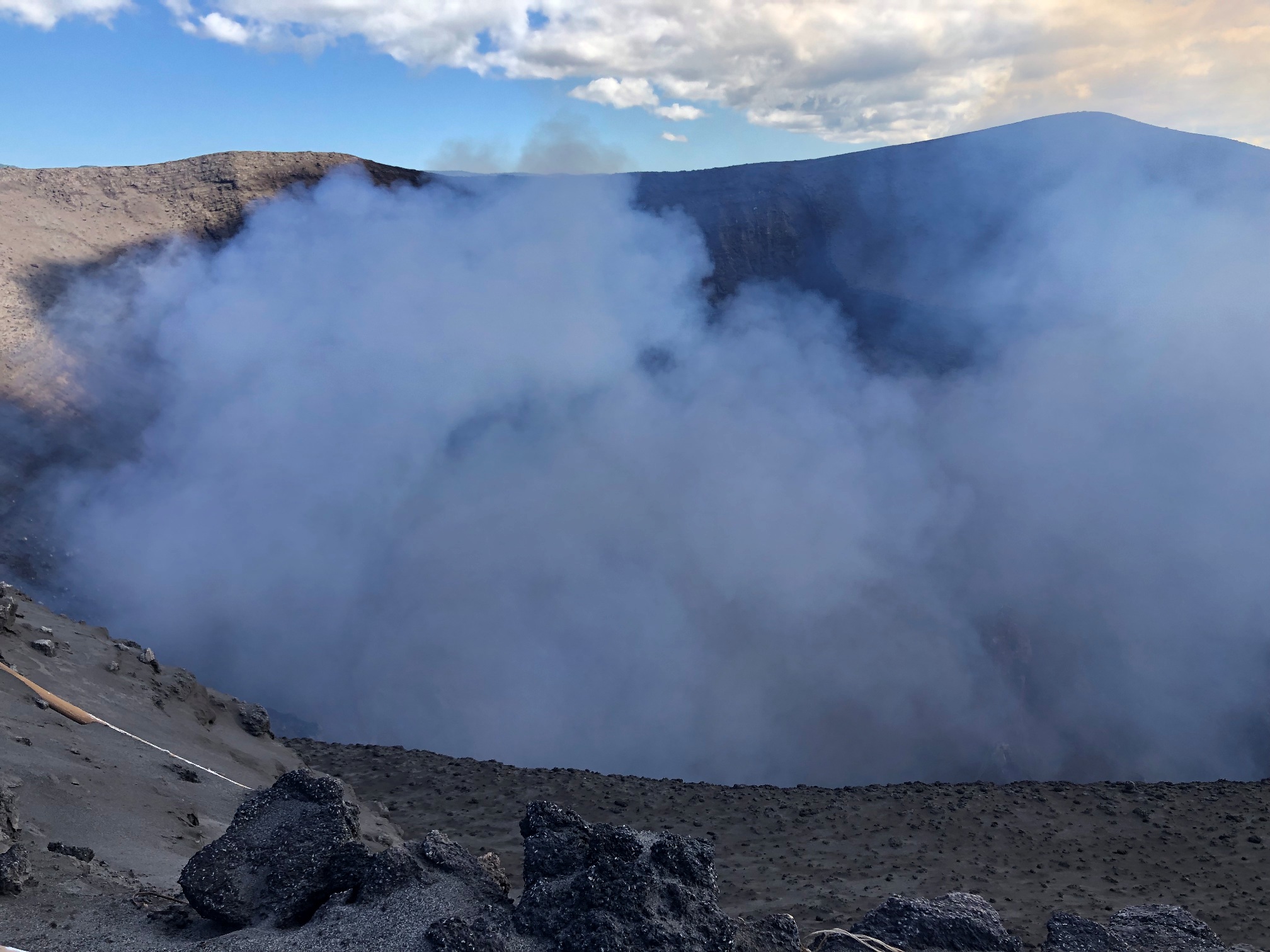 The loudest rumbles eject rocks high into the air. These were difficult to photograph but they are clearly visible as black specks here during the loudest event we witnessed. 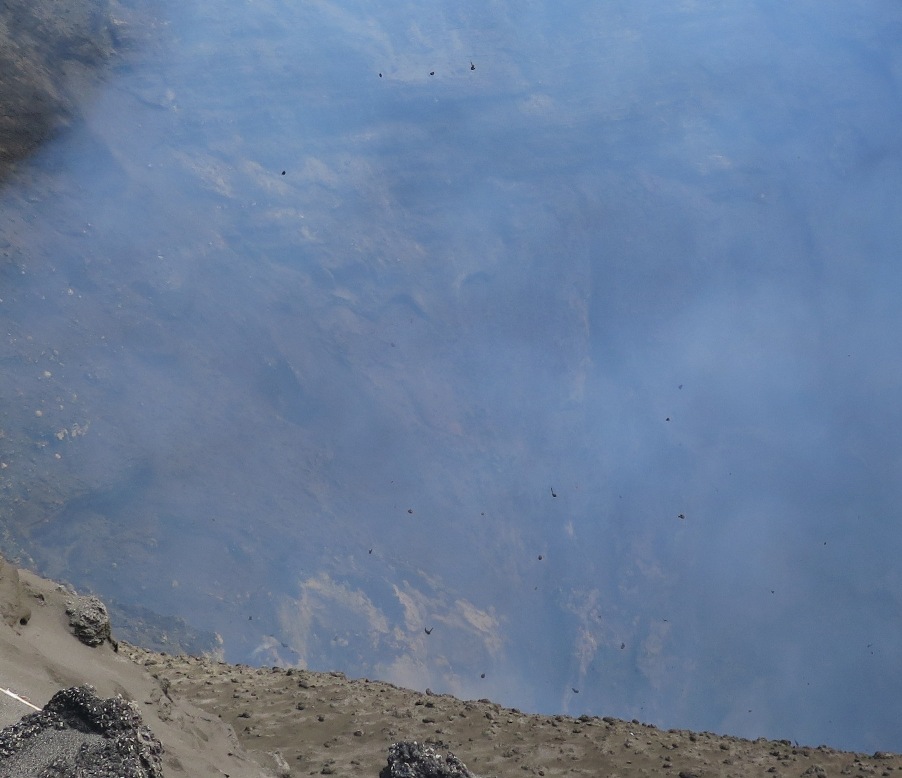 I got the impression our visit was quieter than average. If you visit Mt. Yasur you will see an eruption in action.