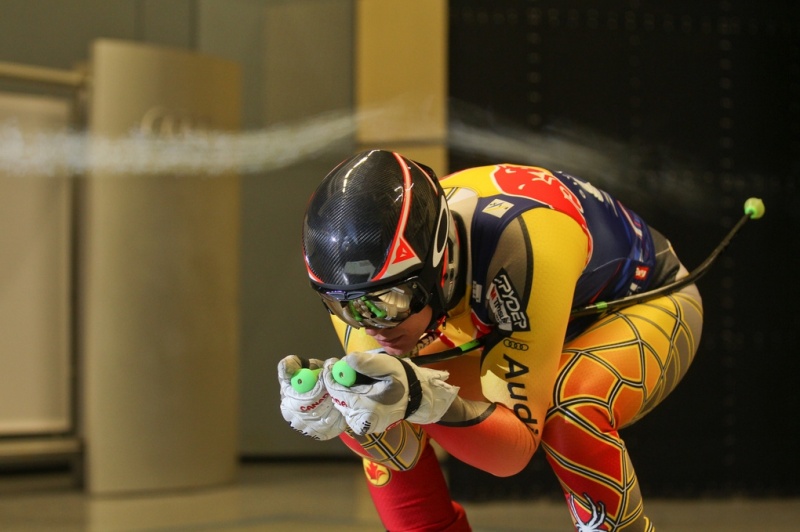 In a sport where every hundredth of a second counts, the data collected will provide Canadian Alpine Ski Team coaches and ski racers with invaluable information heading into the 2011-12 World Cup season.

“It’s gone really well,” said Guay, 30, who passed Crazy Canuck Ken Read’s mark of 14 career World Cup podiums with No. 15 in Kvitfjell, Norway, last season. “This tunnel has real time drag co-efficient data so you can see how fast you are very quickly. It’s a good chance to try new equipment and work on positions.”

The Audi Wind Tunnel Center, based at Audi’s European headquarters in the German city of Ingolstadt, plays a key role in the new and ongoing development of cars and vehicle components and also offers research services for athletes. Alpine Canada signed a long-term sponsorship deal with Audi Canada earlier this summer and it’s the first time Canadian Alpine Ski Team racers and coaches have used the European facility.

Paul Kristofic, head coach of the men’s team, worked alongside other Canadian coaching staff and the three skiers to collect data and test equipment, which included a new Canadian team speed suit for the upcoming World Cup season.

“The big difference in this tunnel is that we are able to be in there with the racers,” said Kristofic. “It’s state of the art. These guys are experts – the engineers are top shelf.

“We have been able to do really accurate equipment testing. We’ve gathered comparable data – comparing which suits and combinations of padding work the best, for example. The racers test multiple variations – jump positions, transitions from tuck to standing and so on. For the first time at a new facility, this is awesome.”

Dixon, 26, is a World Cup veteran, but this was his first time testing inside a wind tunnel.

“It’s gone really well. The facility here is unbelievable,” he said. “We’ve got all the information on a projector and I’ve definitely seen some things that will help me.”

Thomsen, a newcomer to the Canadian Alpine Ski Team, was also taking part in his first wind tunnel test Friday.

“It’s really easy to pick up things,” said the 24-year-old. “I have a tendency to stand up and drop my hands down and you learn how important it is to be in the right position. It’s really cool to have this experience.”