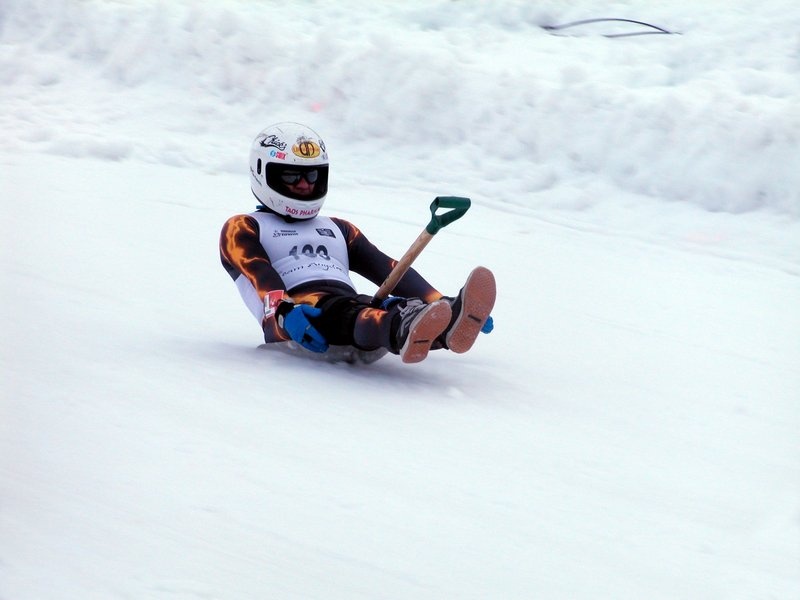 Angel Fire, NM – A taste of Louisiana is coming to Angel Fire Resort as competitors of all ages are once again waxing up their snow shovels for the legendary Angel Fire Shovel Race Championship happening over Mardi Gras Weekend, this Friday and Saturday.  The challenge is fairly simple: competitors sit on the scoop of a standard aluminum snow shovel, handle pointed downhill, and then lift their hands and feet to allow gravity to take them for a ride. Each rider gets two shots to clock the fastest time down the front of the Angel Fire ski mountain. Top speeds regularly exceed 60 miles per hour.

“Shovel racing began as a simple contest here in the 1970’s when our lift operators would ride their shovels down the mountain at the end of their shifts,” explains Andy Whitacre, mountain operations, Angel Fire Resort. “It has since grown into a crazy competition on the mountain that includes speed suits, costumes and radar guns! No year is ever the same, as competitors always try and out do each other every season.”

The organized competition has been held for over 30 years at Angel Fire Resort, and racers are expected from all corners of the country. The event has even been featured by national news outlets including ESPN, ABC Sports, MTV and The Travel Channel. Shovel racing was also once a featured sport during the early years of the Winter X Games.

This year the event will include a Women in Media Shovel Race Competition – where Women in New Mexico television and print media will compete for bragging rights and the fastest time down the hill on a shovel.

Children as young as age 6 are invited to participate in the “Little Scoop” race category. Cash and prizes will be given to the fastest competitors in all age-specific categories. The weekend events will include a practice course, Mardi Gras themed food and drink specials and live music.