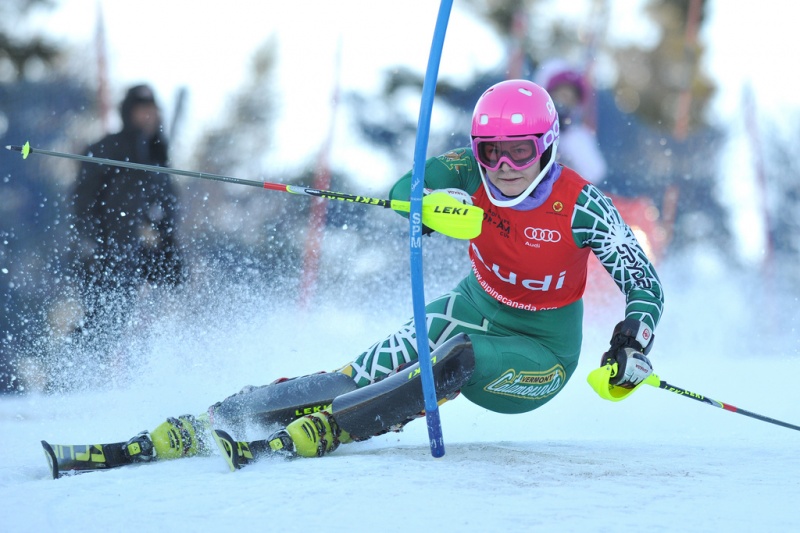 Sun Peaks (BC), Canada – Five lucky winners plus a guest each will have the once in a lifetime opportunity to ski or ride the slopes of Sun Peaks Resort before opening day, currently scheduled for Saturday, November 23. For every C$25 someone donates via the Make a Champ website to local ski racer, Elli Terwiel, who is vying for her chance to represent Canada at the 2014 Sochi Olympic Games, they will receive one entry into the contest.

“Other than the race teams on ‘OSV’ ski run there has never been an opportunity for people to ski before opening day,” says Jamie Tattersfield, head of mountain operations at Sun Peaks Resort. “And we can’t think of a better reason to do this than to support Elli.”

Terwiel, 24, is currently an engineering student on a ski racing scholarship at the University of Vermont.  As she is a member of the National Collegiate Athletic Association (NCAA) her fee payments cannot include prize money or sponsorship dollars.

Through crowdfunding on MakeAChamp.com, Terwiel has been able to raise C$10,000 this fall to cover a portion of her Alpine Canada team fees. Tourism Sun Peaks and Sun Peaks Resort Corporation have now teamed up, launching this contest as an extra incentive to assist in raising the remainder of her team fees and some of her travel expenses. Team fees are approximately C$15,000 a year, while travel on the World Cup circuit this fall and early winter is required if Terwiel hopes to reach her dream of being on the Canadian Olympic team.

Sun Peaks’ community and guests have been very supportive of Terwiel throughout her ski racing career. During a recent fundraiser with Sun Peaks Resort Corporation, the company matched over C$1,000 in donations raised by those who contributed when they purchased their season’s pass.

Entries for the contest will be collected until Wednesday, November 13, at 12 noon PST. Five winning names will be drawn on Thursday, November 14 and announced via Sun Peak Resort’s Facebook page by noon PST. Skiing will take place on November 20 or 22, depending on weather conditions and current mountain operations. The group will ski together with a mountain official, securing bragging rights for the entire winter season. Mountain and trail access will be determined closer to the date.

How to donate and enter
Step 1 – Every C$25 donated to Elli’s fundraising page on the Make A Champ website receives one entry into the draw.
Step 2 –  Email marketing@sunpeakstourism.com to be officially entered, stating the amount donated. Verified entries will be added into the draw barrel at the Tourism Sun Peaks office.

If a donation has already been made
If a person has already donated to Terwiel through the Make A Champ website and wishes to enter the contest, they may send an email to marketing@sunpeakstourism.com. The previous donation will be verified and the name entered into the contest.