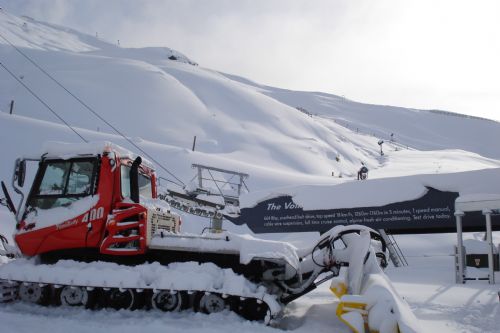 Queenstown, New Zealand – It’s a little late but snow has finally arrived on New Zealand’s South Island. In this case, however, it’s been too much, too fast.

Heavy snowfall and high winds have closed ski resorts this weekend around Queenstown and Lake Wanaka. The snowfall comes as a huge relief after lack of snow and an unusually warm start to winter prevented the region’s ski fields from opening as scheduled. At Treble Cone, however, the 65cm of snow that fell directly upon wet tussocks has put the avalanche danger through the roof. In fact, both Brenda and Simon from Treble Cone’s ski patrol say that they’ve never before encountered such instability in their ten years at the resort.

That’s forcing Treble Cone to proceed with a progressive opening schedule. On Monday, the ski area will open their Platter lift and Learners area only, although mountain food and beverage, rental and snowsports school will all be available. No access of any kind will be permitted above the resort’s base area.

“We’re delighted that the season is finally underway, albeit on a limited basis. Our hard working staff are doing everything possible to ensure we can fully open our doors for business shortly,” said Nigel Kerr, Treble Cone’s marketing manager. “We will be looking to take advantage of any weather clearances to carry out avalanche control but with the current forecast and very high instability cannot set anything other than ‘as soon as possible’ on progressing in steps towards opening the Home basin and then proceeding out to the Saddle basin area.

“We are very excited to have all this snow and look forward to the fantastic season which must surely follow,” added Kerr.

The storm also closed Cardrona and the Snow Farm in Wanaka, along with the Remarkables in Queenstown, although Coronet Peak was open on Sunday with 20cm of new snowfall. Snow Park NZ delayed its Monday opening of its Box Run and Learners Run until 10 a.m. Several inches of snow fell in town in Queenstown and a number of  flights in and out of the airport were also canceled.

With school holidays taking place later this year due to Rugby World Cup, there is still plenty of time for snow to fall before the busiest time of the season and pre-booked ski camps and programs, a sentiment that is echoed throughout the region.