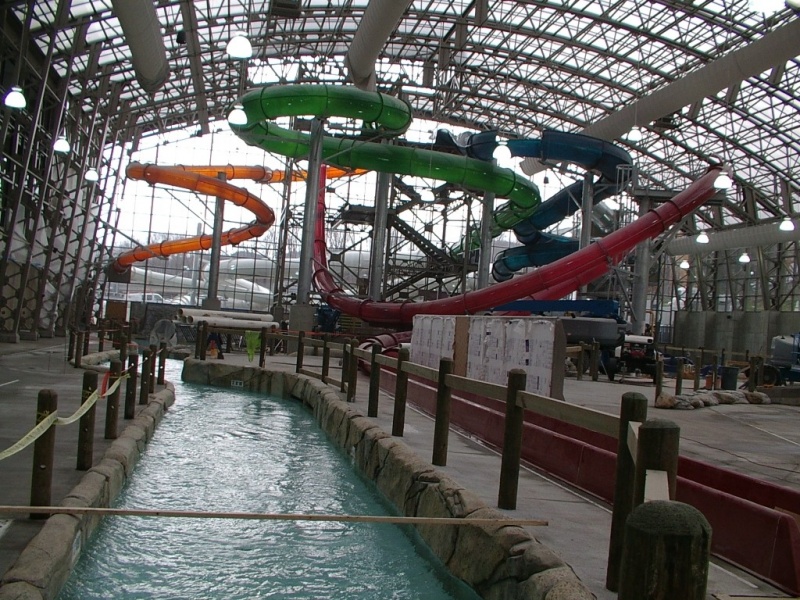 Jay, VT – Jay Peak Resort has invented a weather-proof winter vacation. The Vermont ski and snowboard resort, using a quarter of a billion dollar investment, began working on base area projects three years ago and will unveil the flagship achievement of the initiative, an indoor water park, in 48 days.

“We knew it was going to be a game-changer when we were in the design phase,” said Bill Stenger, Jay Peak’s president. “But to see such a dramatic increase in lodging revenue before the project even opens really highlights the public’s desire for a guaranteed great time during a vacation”.

Stenger is referring to a 120% jump over last year’s lodging revenue already on the books for the 2011-12 winter season. The precipitous increase is being attributed to the Pump House, the 50,000-square foot indoor water park. The state-of-the-art facility will have its grand opening on December 12.

Jay Peak has always been known for its skiing and riding. Tucked away in Vermont’s Northeast Kingdom, the resort receives the most snow in eastern North America—close to 400 inches of fluff every winter. But as anyone who has visited New England in the winter knows, the weather can be unpredictable. Resort officials have been addressing that unpredictability over the last two years by building weather-proof amenities. The Tram Haus Lodge, complete with a spa and fitness facility opened in 2009 followed the next year by an NHL-sized skating arena and a new Nordic facility. The Pump House indoor water park opens in eight weeks.

“A lot of people have a ‘What if?’ element in their mind when they plan their ski vacation,” said JJ Toland, the resort’s Director of Communications. “What if it’s too cold, too warm, too windy, or too snowy? What will I do; what will my family do? Having amenities like the Ice Haus skating arena and Pump House remove that element of unpredictability and guarantees our guests a great time.”

The new water park is part of the largest construction project in Vermont currently that also includes the Hotel Jay and Conference Center. The new hotel will more than double the amount of overnight guests the resort can accommodate and the conference center doubles the resort’s meeting space. Resort officials note, however, that the rapid rise in destination business compared to this time last year doesn’t even include the additional lodging units the resort is building.

“The 120% increase in our lodging business is for available units; rooms and condos that were available this time last year,” said Stenger. “While the Pump House opens December 12th, rooms in the new Hotel Jay won’t be available until late January. We haven’t even added those bookings into the current mix. When that happens, the end figure is going to be a big one.”

Aside from being weather-proof, Stenger says it’s the uniqueness of the Pump House that’s driving people to choose Jay Peak. The $27 million facility features a retractable roof and offers an AquaLoop—a slide that drops riders into a 60-foot freefall before sending them into an upside loop at speeds of 45 miles per hour. It also houses the largest indoor action river in North America and the Double Barrrel, a twin FlowRider standing wave that will let visitors claim that they have “surfed” in Vermont.